Church of San Leopoldo in Steinhof

This project Otto Wagner got that modernity takes hold in the realm of the sacred while giving continuity to the tradition of the great churches, such as San Marcos in Venice or Hagia Sophia to Istanbul. The church of San Leopoldo is considered one of the most important churches of the twentieth century and is among the masterpieces of the architect.

The church is part of a psychiatric center whose construction is called competition, winning first prize Wagner. Although the project was approved in its entirety you will only commissioned the building of the temple, with some omissions as the crypt that was never built.

The model was presented at the 23rd exhibition of the Secession in 1903, beginning the work in 1905 and completing it in a record time of two years, in 1907.

He eventually became one of the symbols of the city of Vienna and its golden dome is visible from all corners of the city. It was restored several times, with the restoration completed in 2006 one of the deepest held in the building.

At the time of its construction it was the church of the psychiatric set Psychiatrisches Krankenhaus, consisting of a mental hospital and a sanatorium, held in Lower Austria, in a wooded slope on the outskirts of Vienna at 310 meters above the sea, on the top of the hill. It is located in the 14th district, Penzing, a little away from any tourist area, below the Galitzinberg, Baumgarther Hoe 1, Vienna, Austria. Unusually the church lies in a north-south axis, the highest center of the hospital complex.

The construction of this church allowed Wagner the realization of the ideas outlined in his 1899 study “Die Moderne im Kirchenbau” (Modernity in the construction of churches), to once developed a very important subject for him, intense collaboration with other artists. Otto Wagner created a modern church, while always maintaining the traditional aspects, such as cross shape or illumination and changing the image, stained glass or bowl of holy water among others.

The influences that received the architect on this project are many, the structure is neoclassical, the organization of space evokes the Renaissance, while the latter suggestion is baroque, creating a magnificent mix of lights, spaces and forms.

The figures on the two corner turrets, San Loepoldo left and San Severino to the right, were the work of Richard Luksch, the four angels placed over the main entrance of Othmar Schimkowits, large side windows Kolo Moser, Table the altar was designed by Remius Geyling and conducted by Leopold Forstner, who did not end until 1913.

The Church of San Leopoldo in Steinhof is a “work of art” secessionist concept, “Gesamtkunstwerk”, as it was designed from the ground up to the smallest detail, all pre-planned by the architect and his associates.

Externally the church is lined with marble slabs and decorated with gold supported on a tall stone base studs surrounding the compound. Together with the rocky terrain on which was built earned him the name Kirche am Steinhof “stone patio Church” by which it is also known.

Its portico is supported by four thin elongated twisted columns and topped with garlands. Behind them another four columns cross the porch roof and end topped with figures of angels, designed by Othmar Schmkowitz decorating the facade.

The interior of the church is open plan with shallow side chapels. The main decoration consists of a white and gold friezes and marble plates studded in white gold. Natural light illuminates the enclosure through the magnificent blue windows of Kolo Moser.

Otto Wagner incorporated numerous features specifically related to the role of the church within the psychiatric hospital complex:

Most of the corners are rounded and very few edges in the structure, almost no visible crosses, area priest is potentially separate area attendants, access to the pulpit is made only through the sacristy. Emergency exits are built into the side walls in case you need to remove a patient from quickly presented originally existed separate entrances female and male patients, the confessionals were more open than usual. There were toilet facilities easily accessible within the church in case of patient need. Banks were originally from different widths to accommodate different categories of patients: calm, agitated, disturbed. The battery water drip was designed to minimize the risk of infection.

The temple walls have a height of three meters surrounding a domed enclosure is a “firmament” intense white decorated with a kind of grid network of golden grids that together with gold rivets help hold the ceiling tiles Rabitz suspended.

The soil about 30 inches below displays the main altar in order to ensure good visibility during the celebration of the various trades.

The architect gave special importance to the entry of light into the church, trying to not see the altar dazzled by sunlight, a good sound, guaranteed by the surfaces of all tested acoustic technique. Took into account practical criteria such as separation zones for women and men, patients or hospital workers. All these details are not mentioned at any time by Wagner, to emphasize that all architectural proceeding was the result of “needs” of the site and thus avoiding discussions or rejections as happened with other projects that were not included does not correspond to current tastes.

The great dome is covered with copper plates, whose interior is lowered with a second soft dome 17 feet below, covered with plates “Rabitz” which together take advantage of gold is as an ornament, recalling the Balkan architecture. Above these plates suspended the architect built a concrete slab creating useful for hiding different accessories such as winches lamps space.
The main dome of the church is not visible from inside the building, however, the central hub has an echo of six seconds.

The supporting structure of the dome consists of trusses, curved top surface, which converge at the base of the eye of the dome, supported by pillars inclined crosslinked. The slots of the falsework direct the light toward the ceiling windows. It is joined by a ring of brass coated metal structure anchored plates without therefore push the corresponding buttress axialy

Despite having Palladian style with a formal and decorative debugging, his spirit is evident modernity. It is the result of architectural thought of early modern architecture linked to industrial elements. The structure is metallic, with masonry walls and stone cladding and marble bolted.

The building was constructed of brick on a stone foundation and walls were covered with bright white Carrara marble plates two inches thick, subject to the walls by bolts with copper head screwed.

The floor is covered with white tiles decorated with small black squares.

The vaulted dome of the central building is covered with plates of folded copper, coated with gold-plated on the outside, is visible from afar and the reflection of the sun has gained in Vienna nicknamed Limoniberg, “Mountain of lemon.” A second inner dome 17 feet below unsolved problems of noise and heating aided by its coating with suspended plates Rabitz. 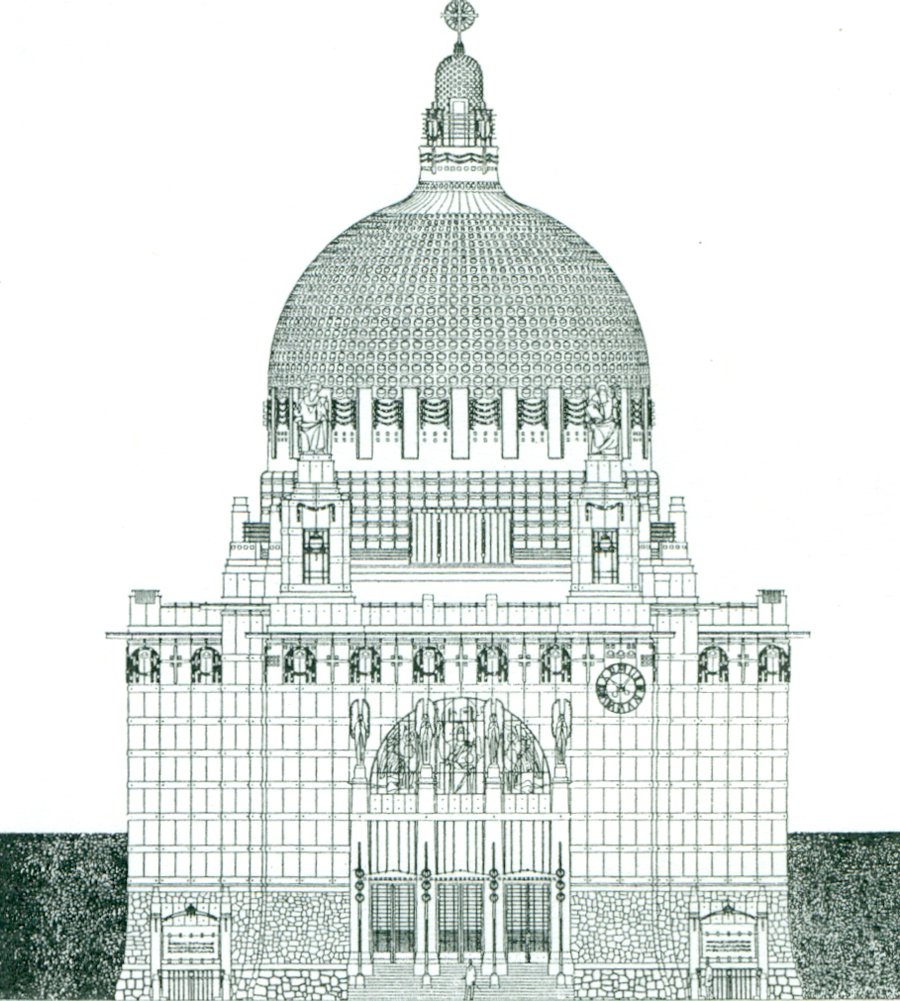 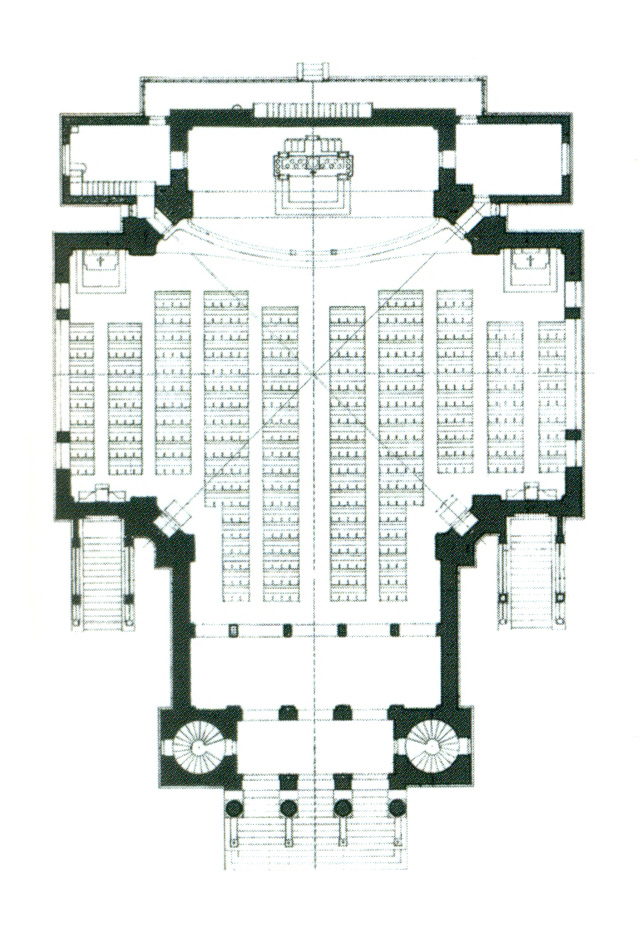 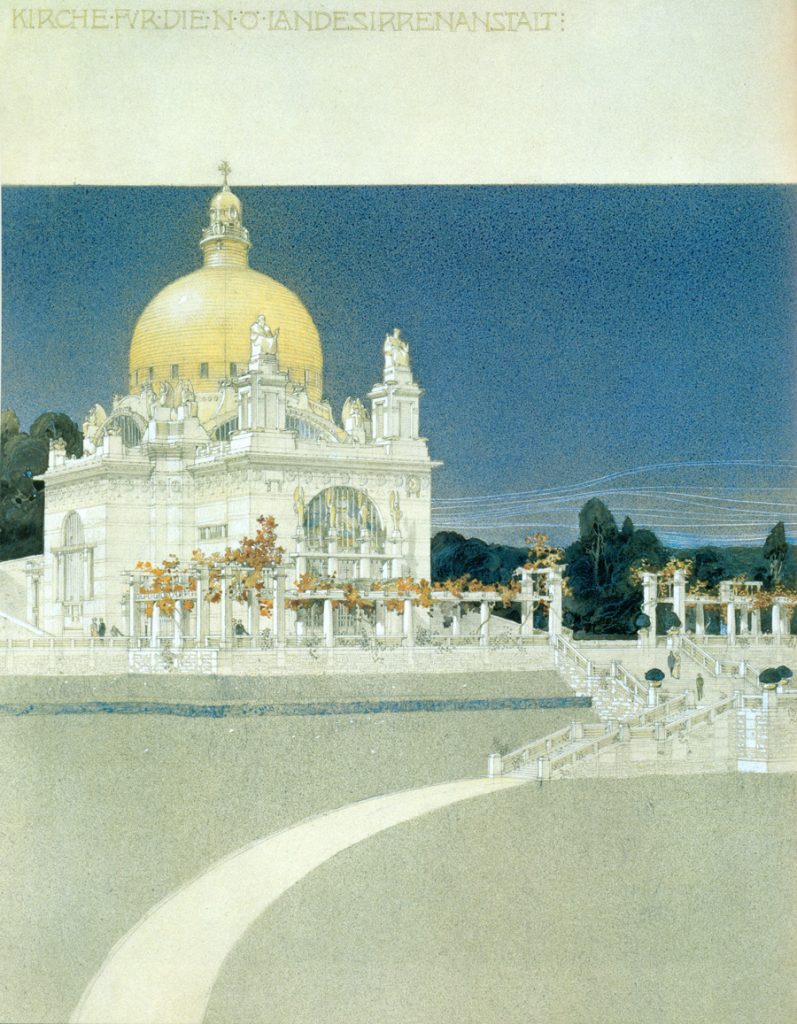 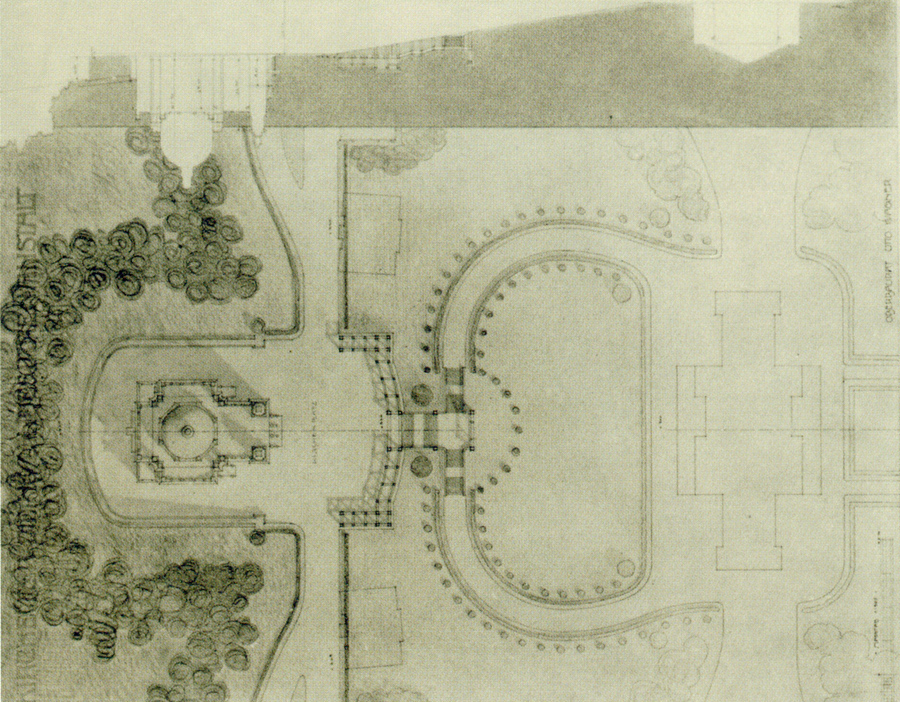 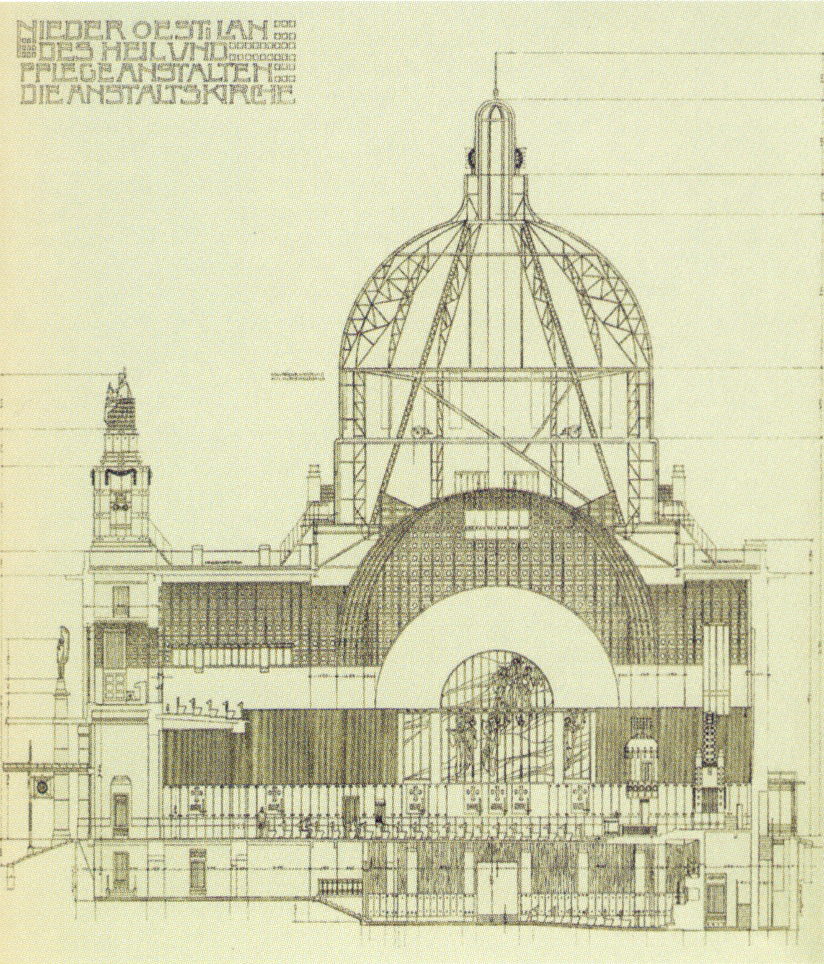 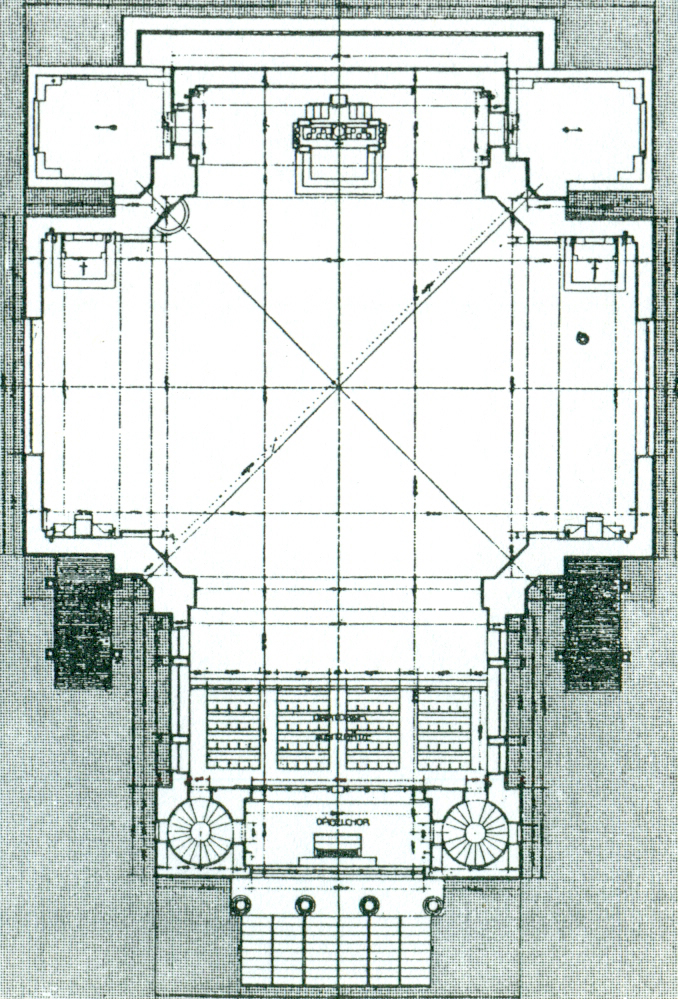 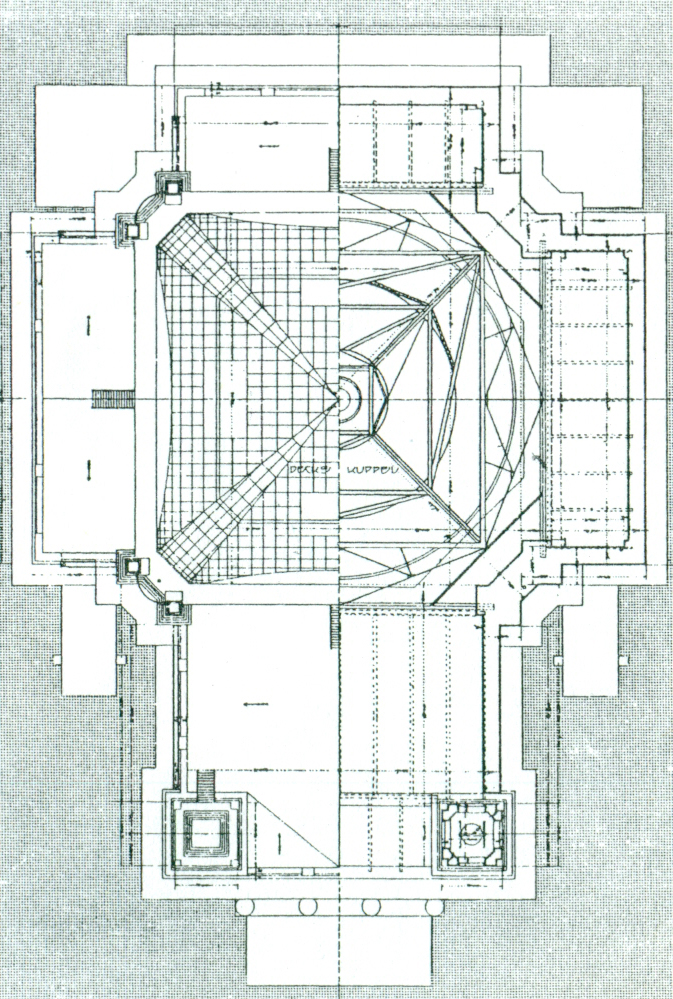 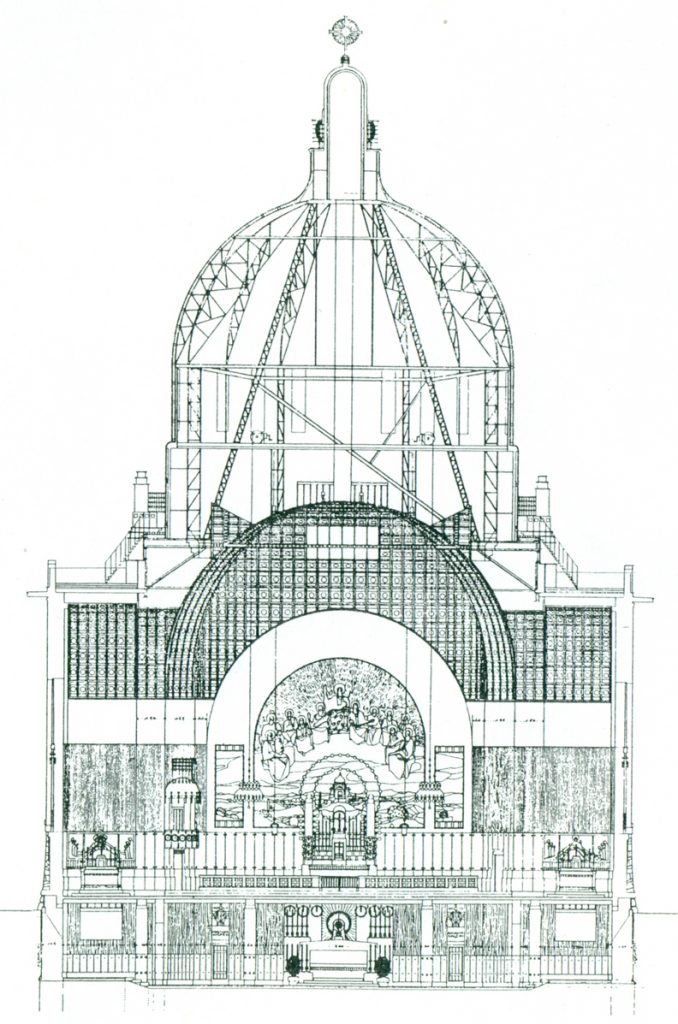 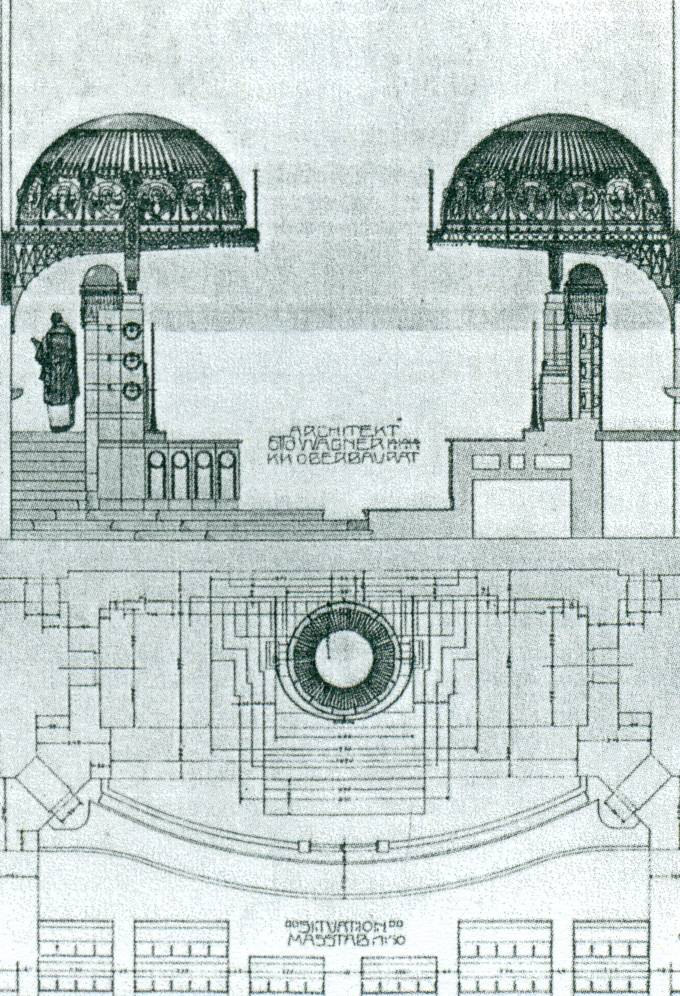 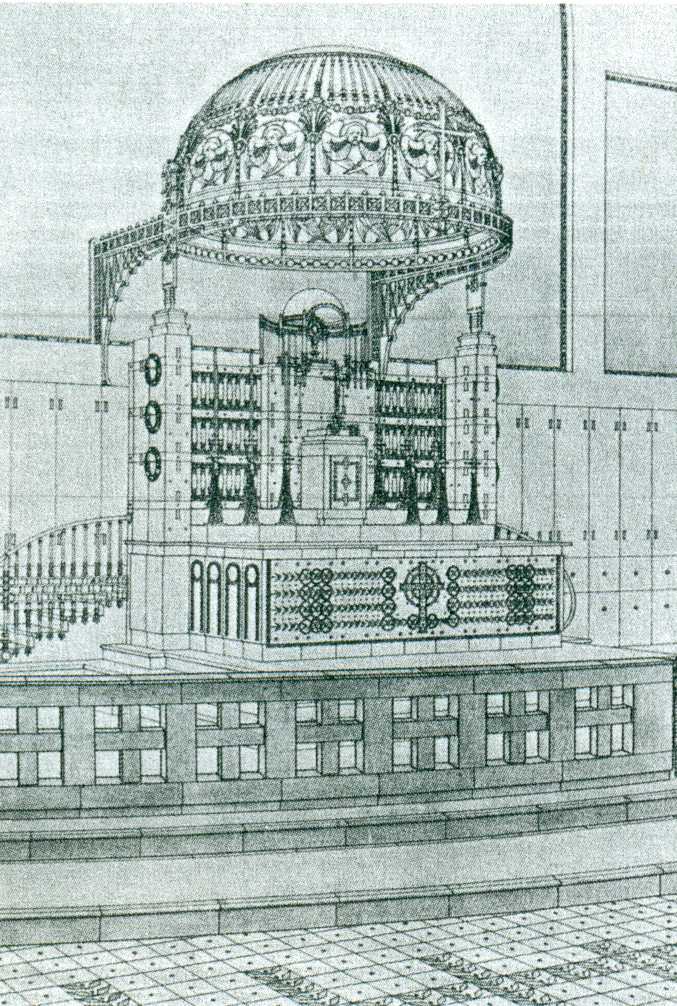 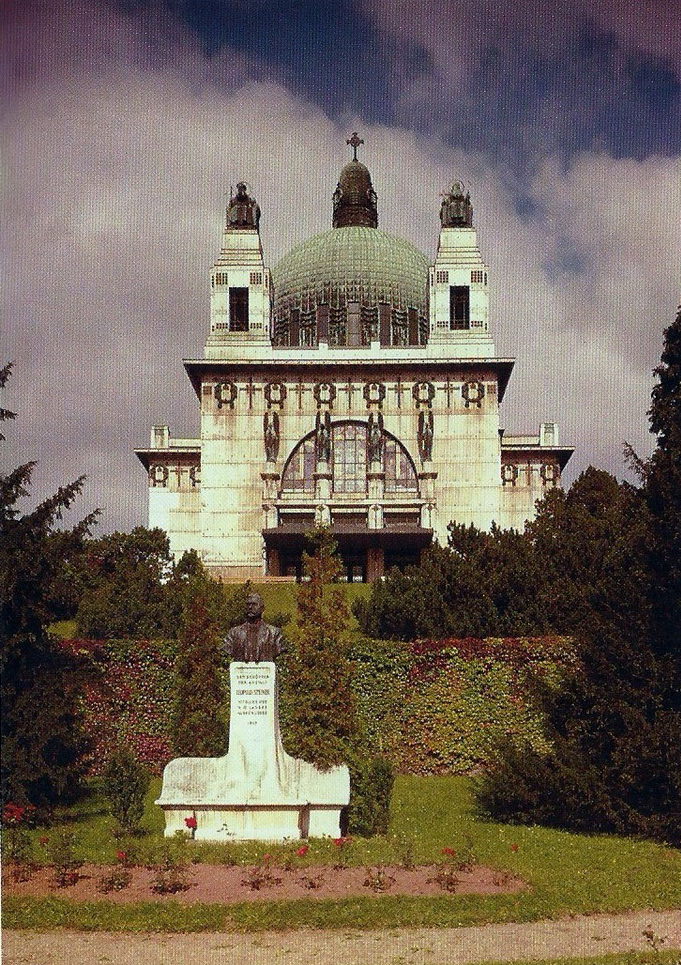 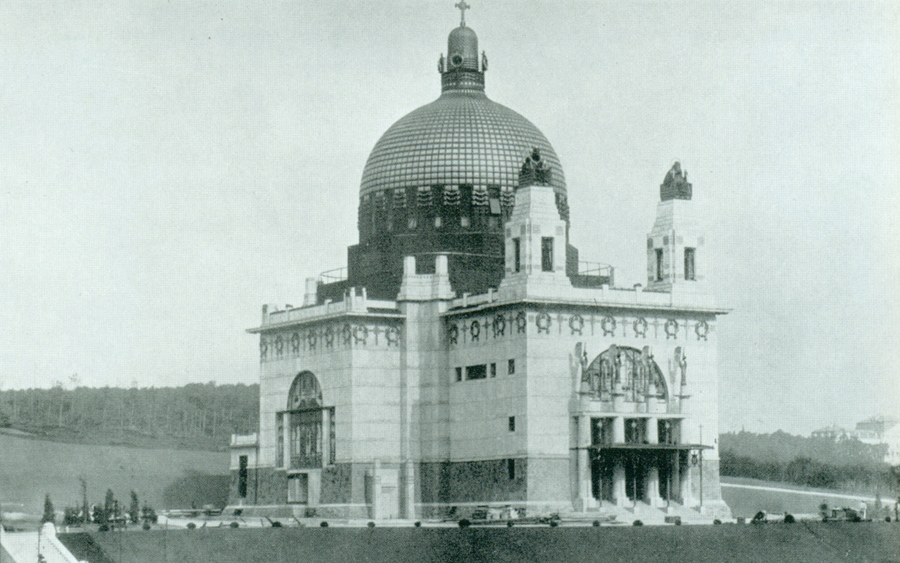 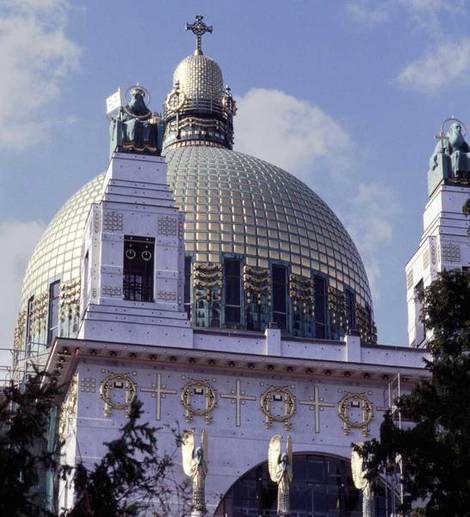 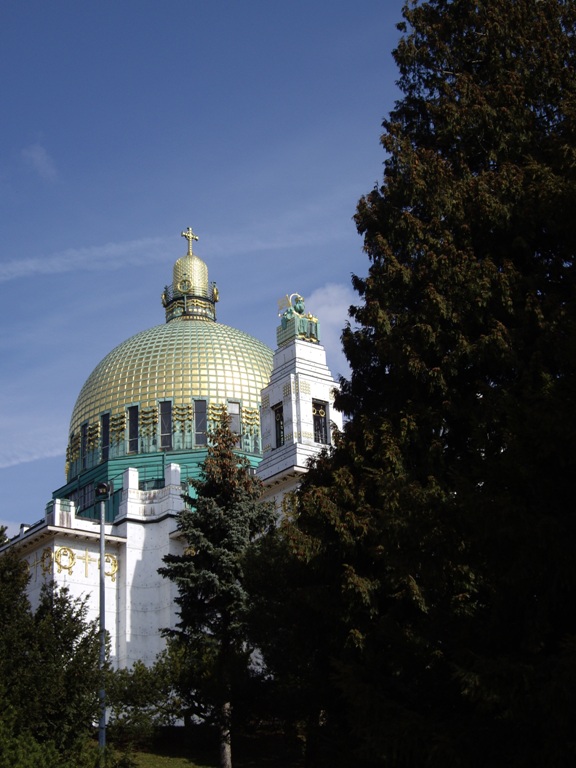 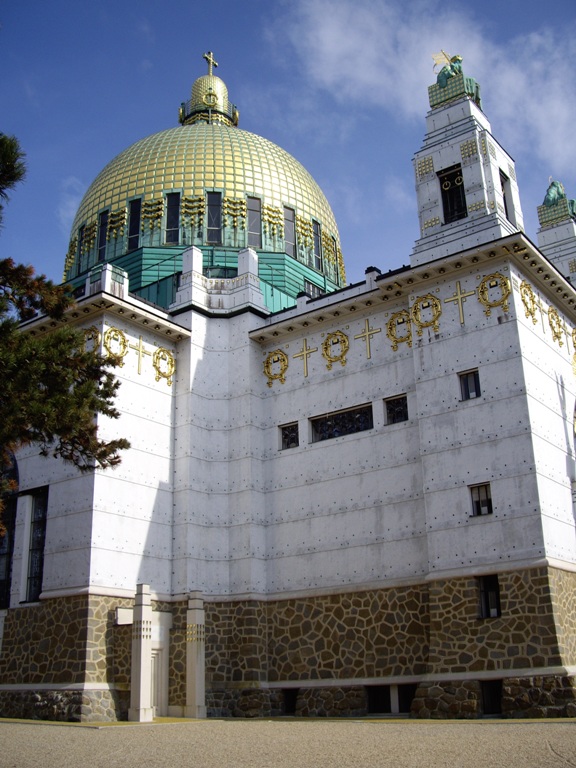 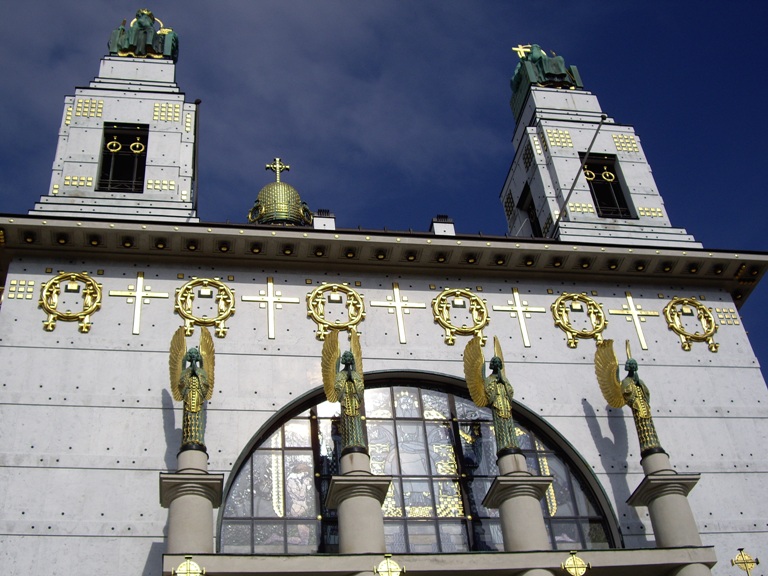 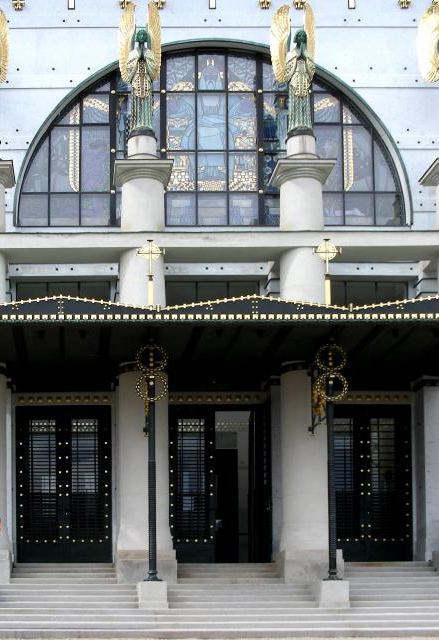 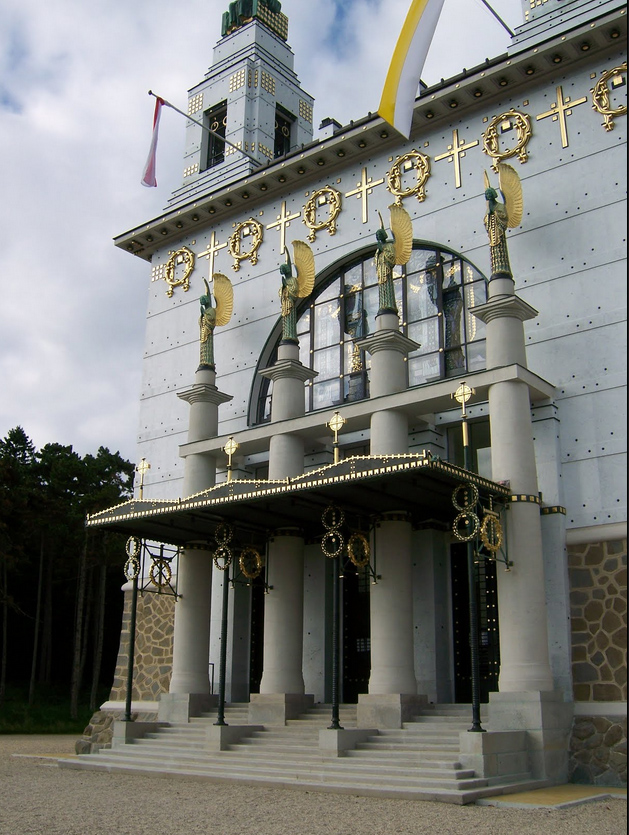 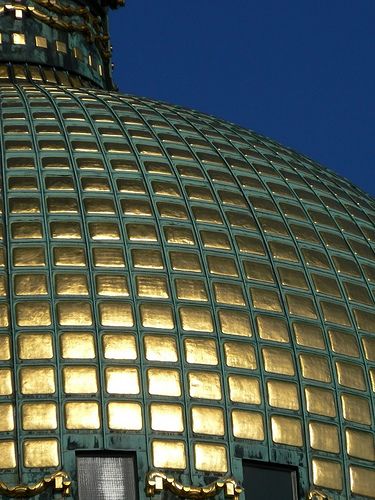 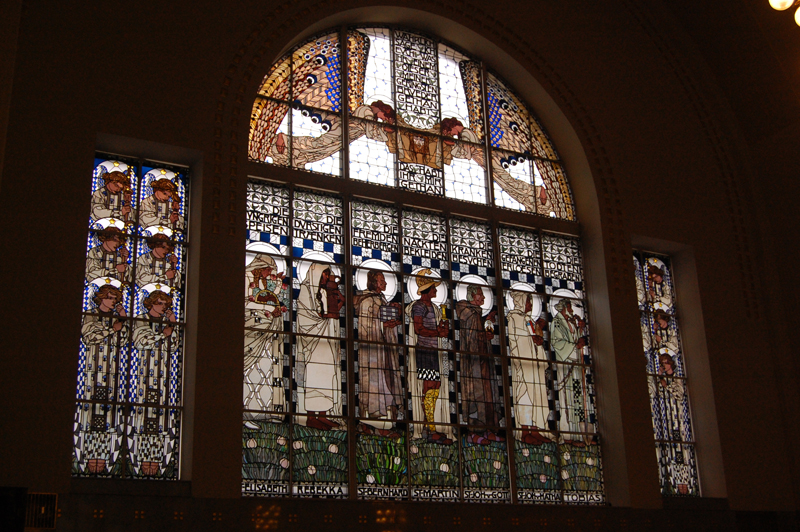 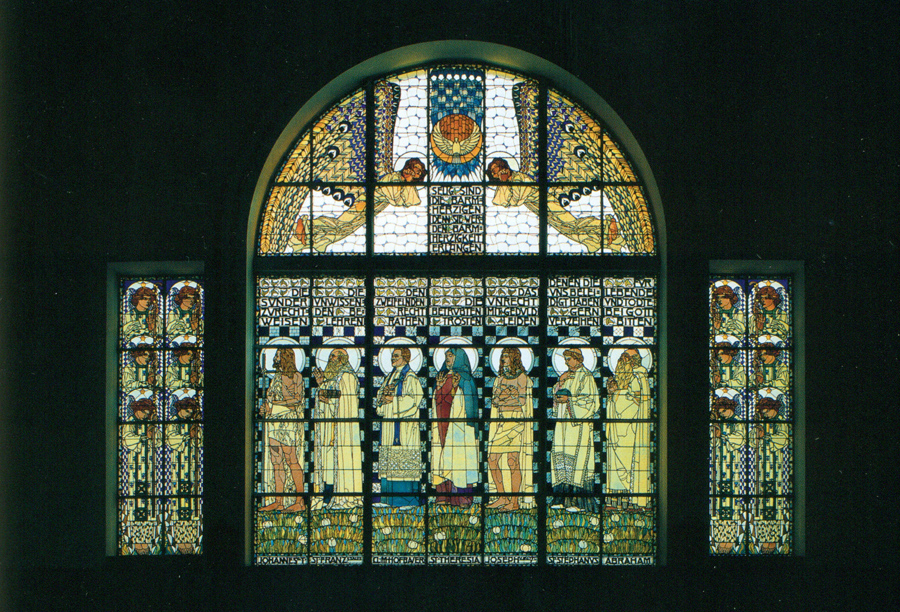 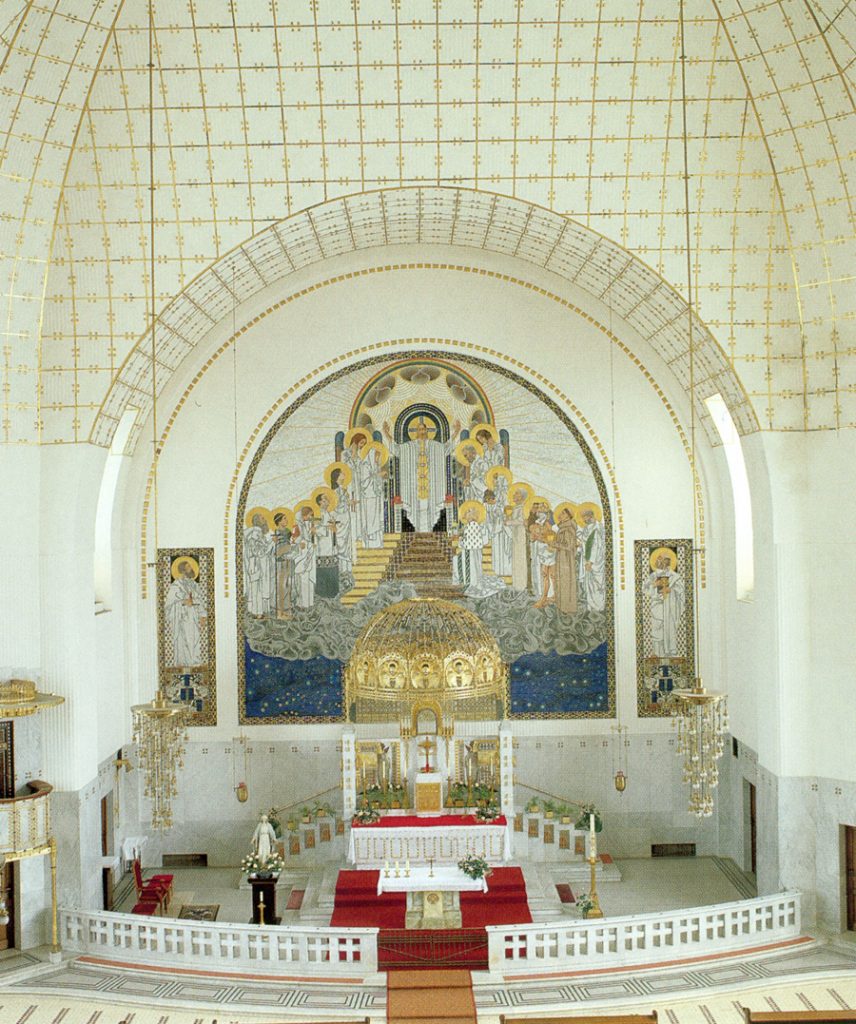 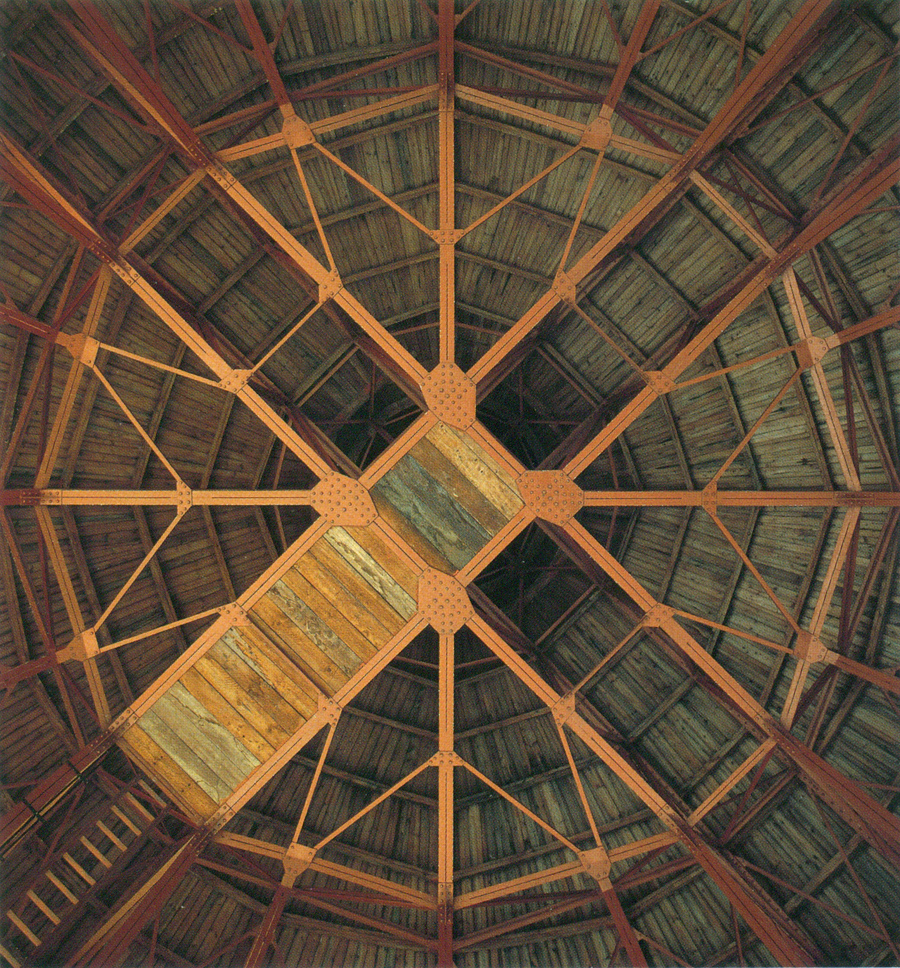 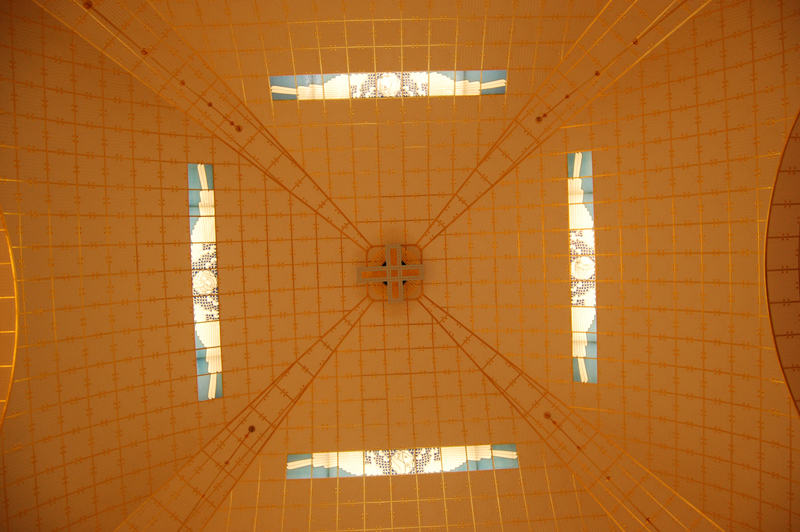 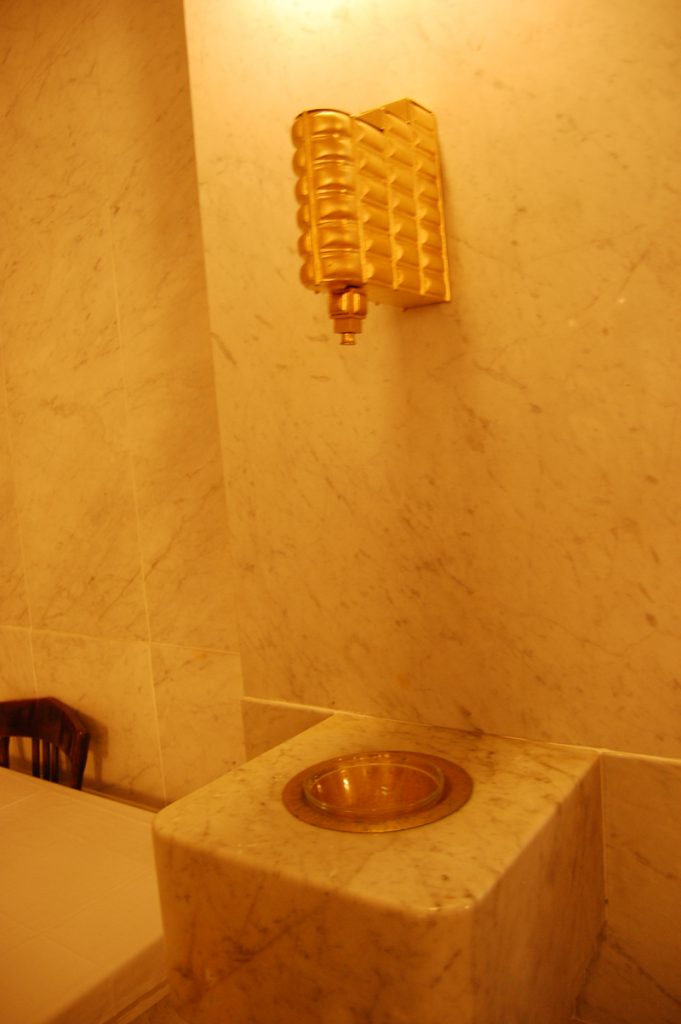 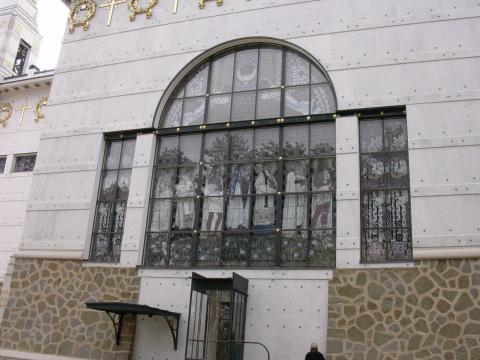 Church of San Leopoldo in Steinhof