The design submitted by architects Shigeru Ban and Jean de Gastines, with the collaboration of the study Gumuchdjian Architects was the winner in the International Competition organized in 2003 to the Centre Pompidou in Metz.
The Centre Pompidou-Metz is a branch of Cultural Center George Pompidou of Paris and the largest temporary exhibition space outside the French capital, its three galleries offer 5,000m2 for exposure, while flexible and adaptable additional areas may also be used for exposure of different objects.

This architectural gem that was built in the Amphitheatre District, near the train station Metz, capital of Lorraine, France, aims to attract both local people and citizens of neighboring countries. It has a good connection with Paris, an hour and half by TGV and a direct walkway from the station to the center.

“After many meetings that he thought about permanence, flexibility and demounting of the project, one day appeared architect Shigeru Ban with a Chinese shade fabric with straw. From that moment he began to work seriously on the “(Philip Gumuchdjian) project.

The hexagonal woven hat would be the inspiration for the building, both in the literal sense, regarding its fascinating woven structure, such as studies of traditional Japanese architecture, its great protectors cantilevered roofs, their silhouettes fluid and paper screens, making this studio in the heart that triggered the development of the project engineering a sustainable and respectful with the environment.

“As we move through the courtyard and gardens connecting the center of the city of Metz and the station with the Centre Pompidou-Metz, visitors will discover a building of pale light, powerful and light colors while inviting them to take shelter under its protective roof. We imagine an architecture that reflects the openness, the mixture of cultures and well-being in relation to the immediate sensory environment ”
(Shigeru Ban and Jean de Gastine).

The interior space is traversed by three galleries cantilever measuring 100×15 meters and collections saved, while offering majestic views of the historic city of Metz. Since one of the large windows you can see the Cathedral, including optical effect: the closer you get to the window, over the monument away.
The group has nearly 12,000 square meters, half devoted to exhibition spaces. The rest is divided between a 200-seat auditorium, several rooms for workshops, cafe and restaurant with terrace.

Each of the tubes that make up the galleries, you have the possibility of natural and artificial light. For conservation reasons, the tubes must be controlled room temperature, moisture and oxygen.

Large volumes under the roof closed using filtered air, which goes through a hood, cooler than the outside temperature warmer in summer and winter outside, a direct energy recovery system.
Environmental systems are completely hidden in the ground and above in ceiling made of a permeable material that provides secure storage for exhibits. Each gallery changes such ceiling every three years

The idea of ​​the park responds both to the ceiling like a gigantic geometric complexities of urban location. The whole big roof and park form a complementary image of a giant flag floating over landscaped public gardens.
By allocating a larger area created a new park, Les Jardins des Arts, which serves as a buffer between the old and the new district, retaining, at once, but each autonomy while remaining connected.
The park and the building and linked form an indivisible unit, like the Pompidou Centre and Place Beaubourg in Paris. In turn the park as space itself provides an ongoing program of entertainment activities, including summer concerts or skating on the canal during winter.

In the rear of the Centre Pompidou-Metz building including technical and administrative areas of the center is located.

The whole building is built around a central hand that reaches 77 meters high. The galleries cross the hexagonal roof whose structural fabric becomes wooden pier supporting the ground. The design exploits mainly passive means to produce an energy efficient building. The large cantilevered roof protects facades outdoors in winter and provides shade in summer. Inside, the atmosphere is clear, with its wooden ceiling caramel color, whitewashed walls and structures and the surface of your concrete floors in pearl gray.

The undulating roof, wood laminate, surrounding the structure of a metal tower 77 meters high and spans 60 meters, enclosing a huge space where galleries are suspended.
The organic form thereof with the closing of needle spire of the membrane, as if to reach heaven, and structural interweaving of wood create a large grid connected to ground by gentle swirling wood and steel.

When visitors access, below the large deck, tubes gallery soar overhead, soaring space of the forum. From this place, a route haphazardly leads through three different gallery spaces, each with spectacular views of the cathedral, the station and the Public Gardens, thus reinforcing the connection of the Centre with the historic city. 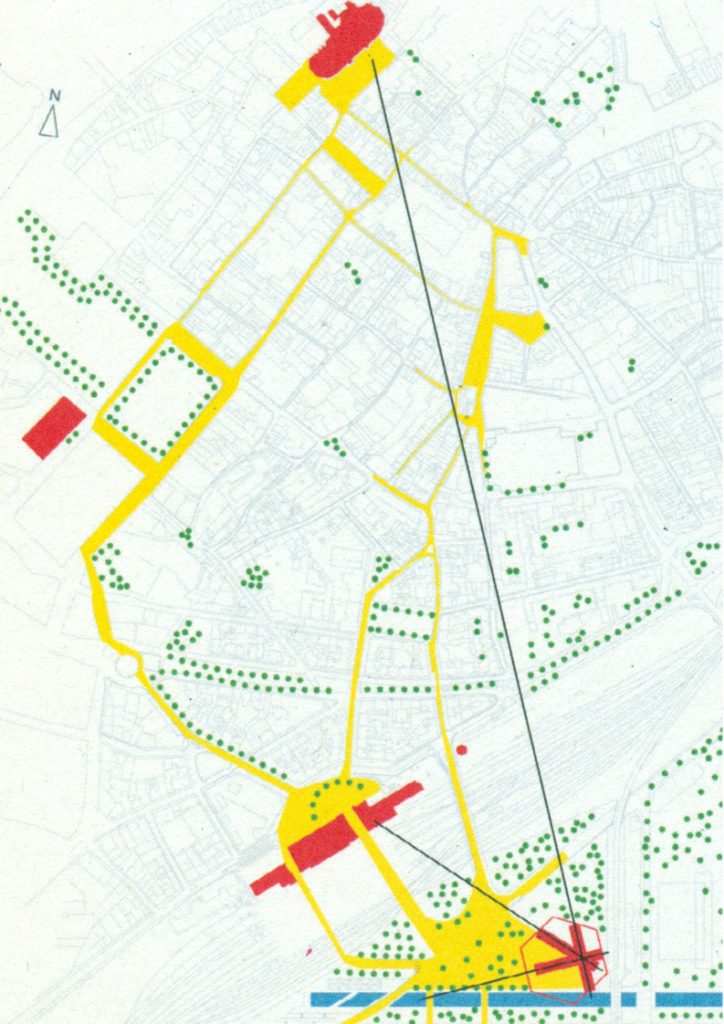 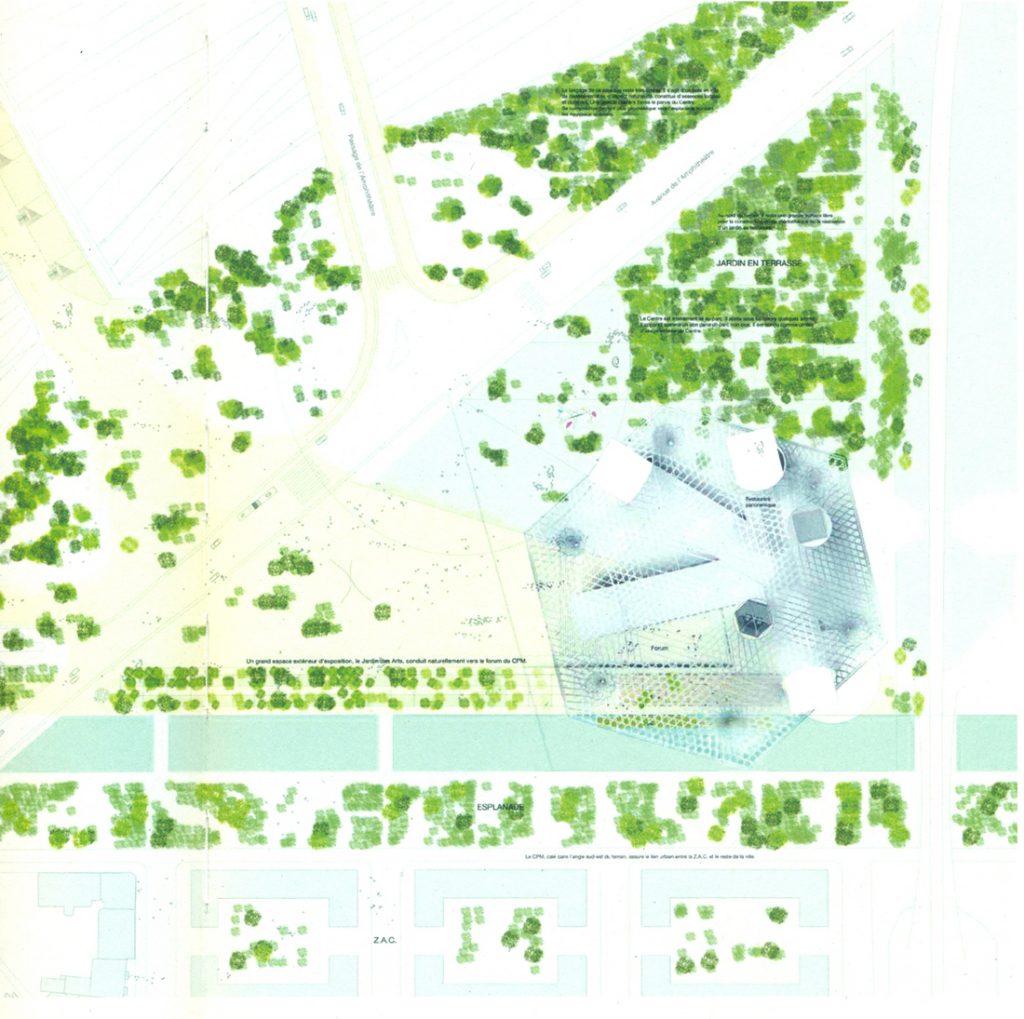 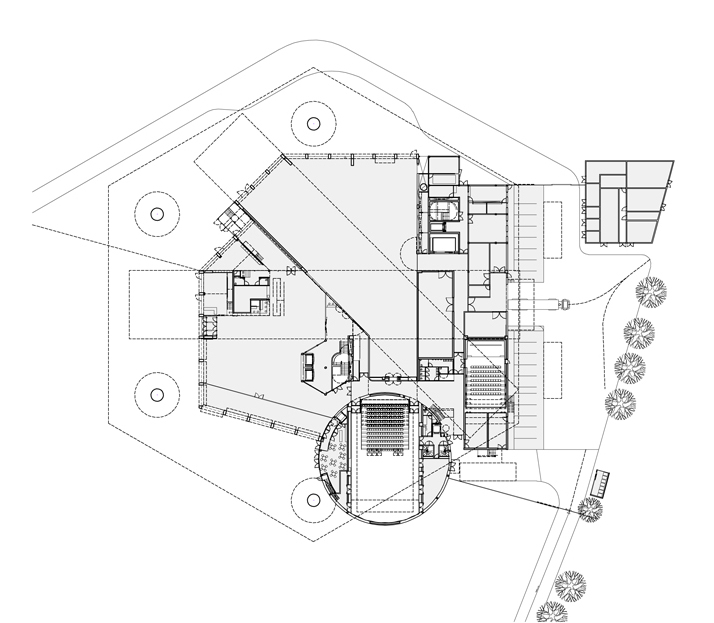 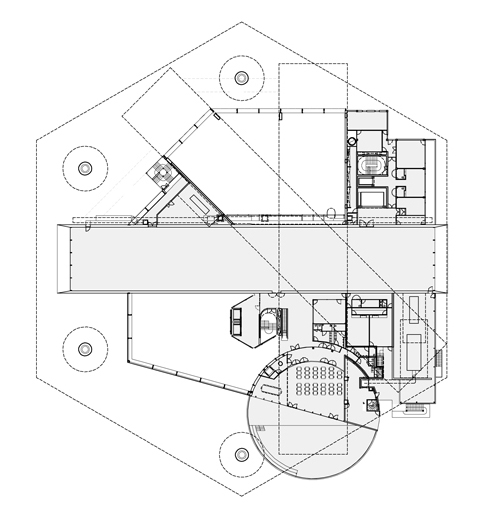 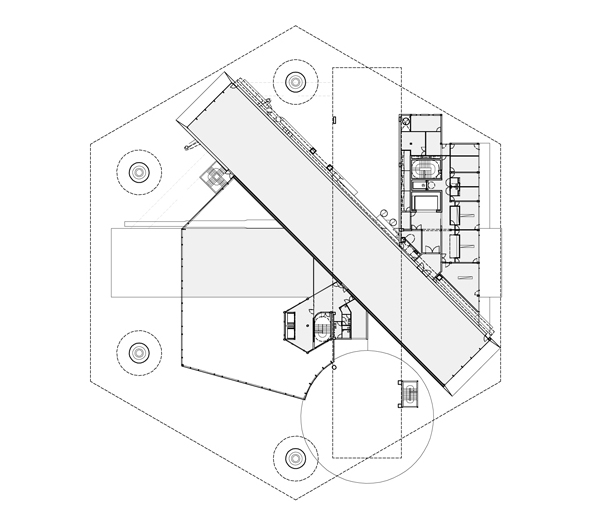 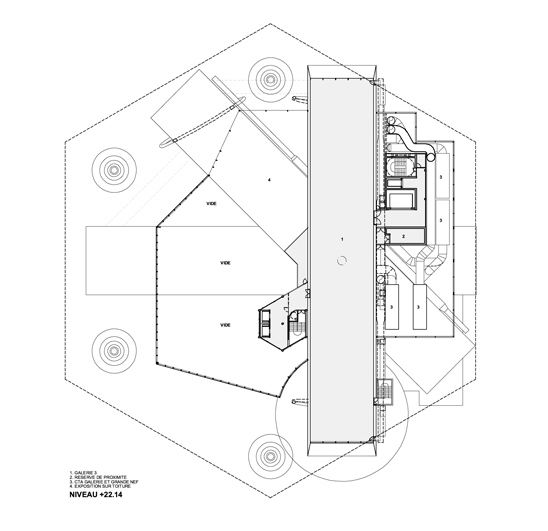 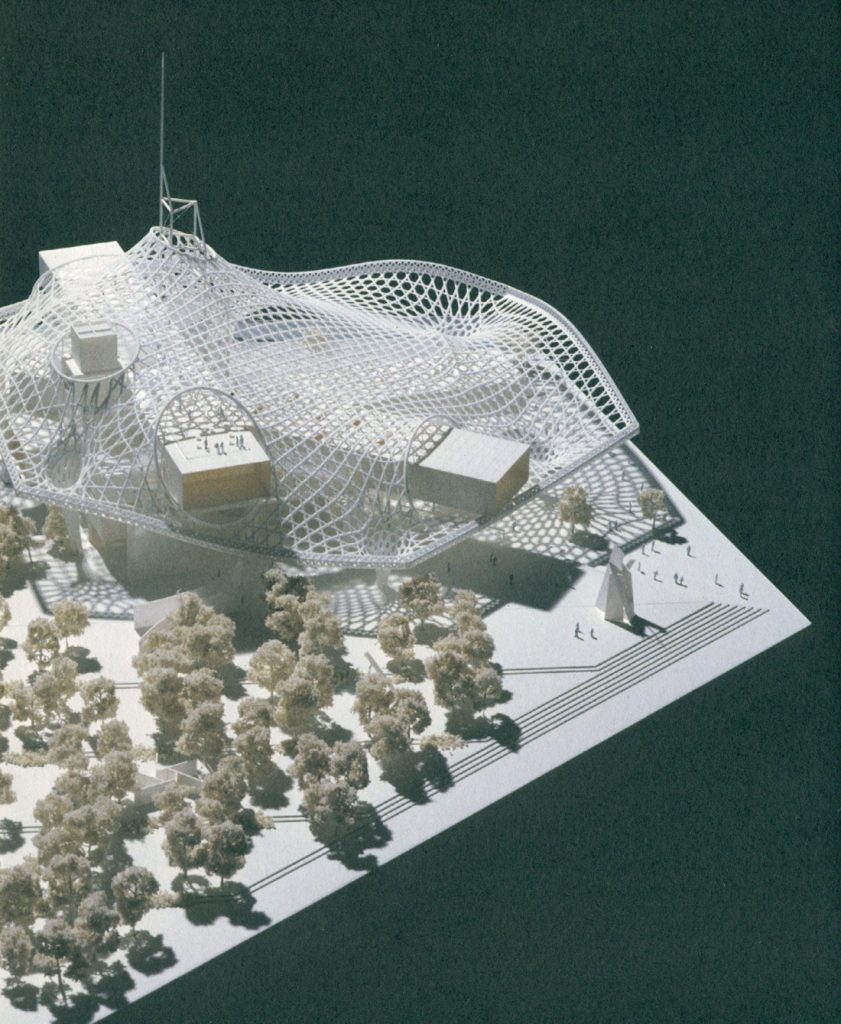 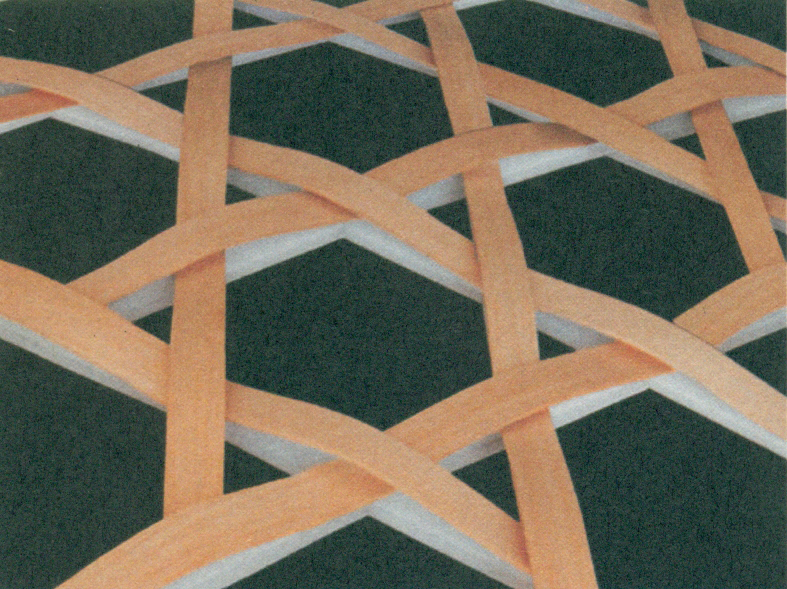 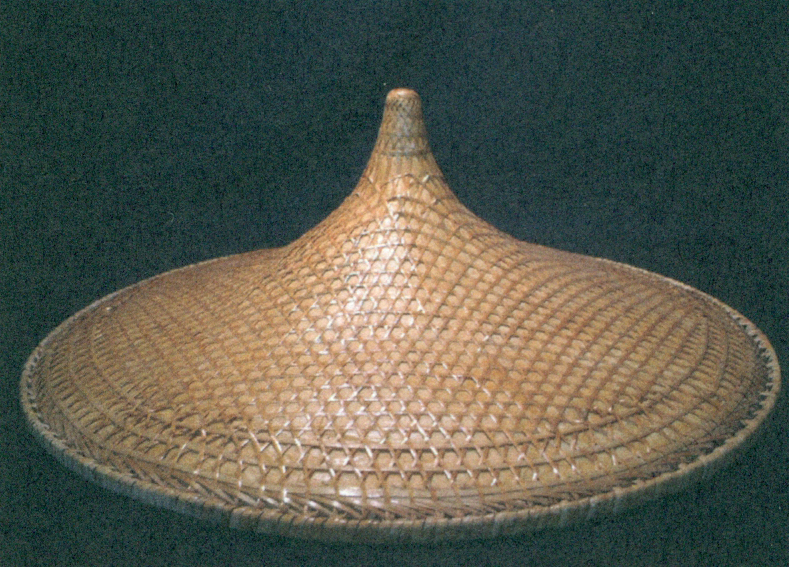 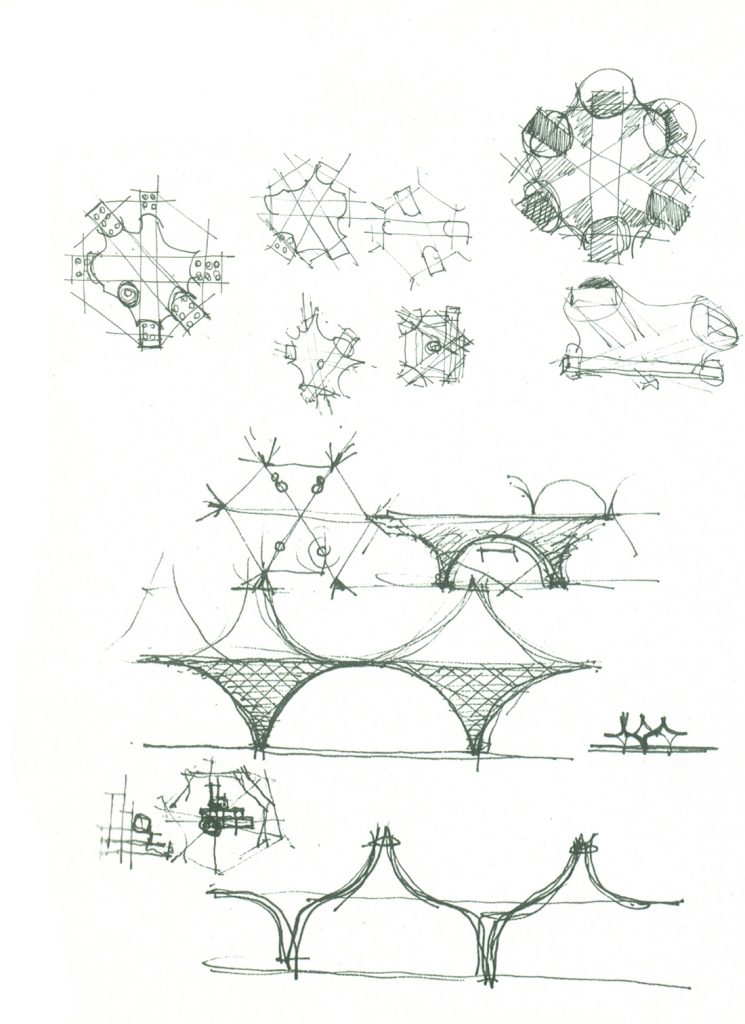 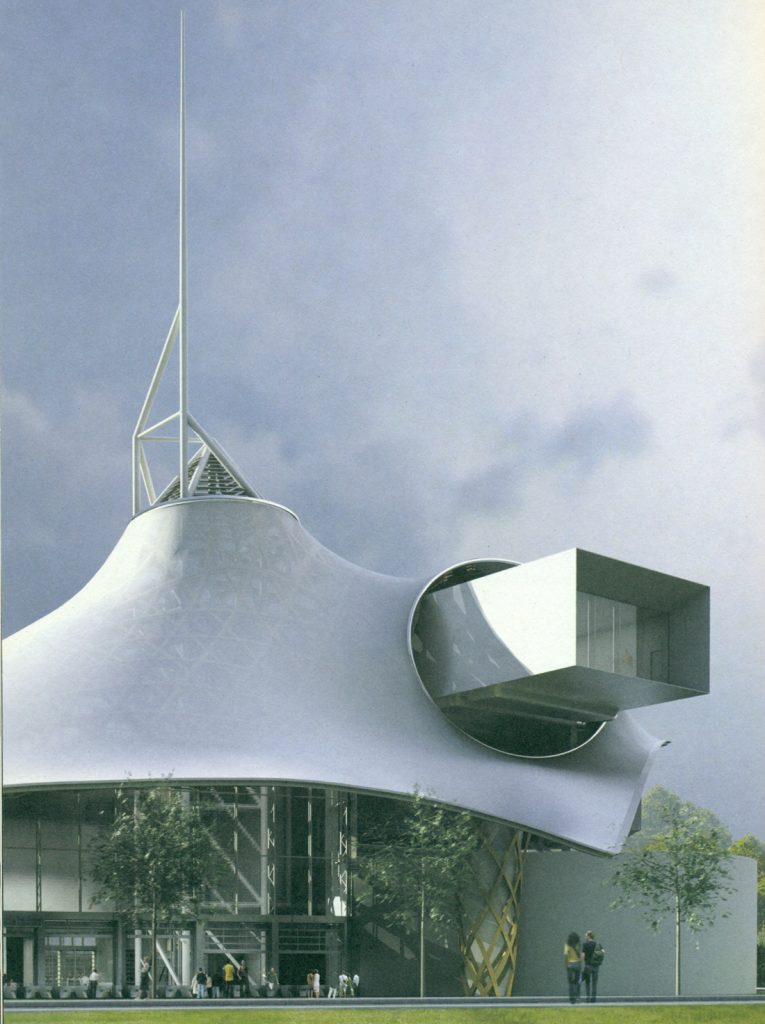 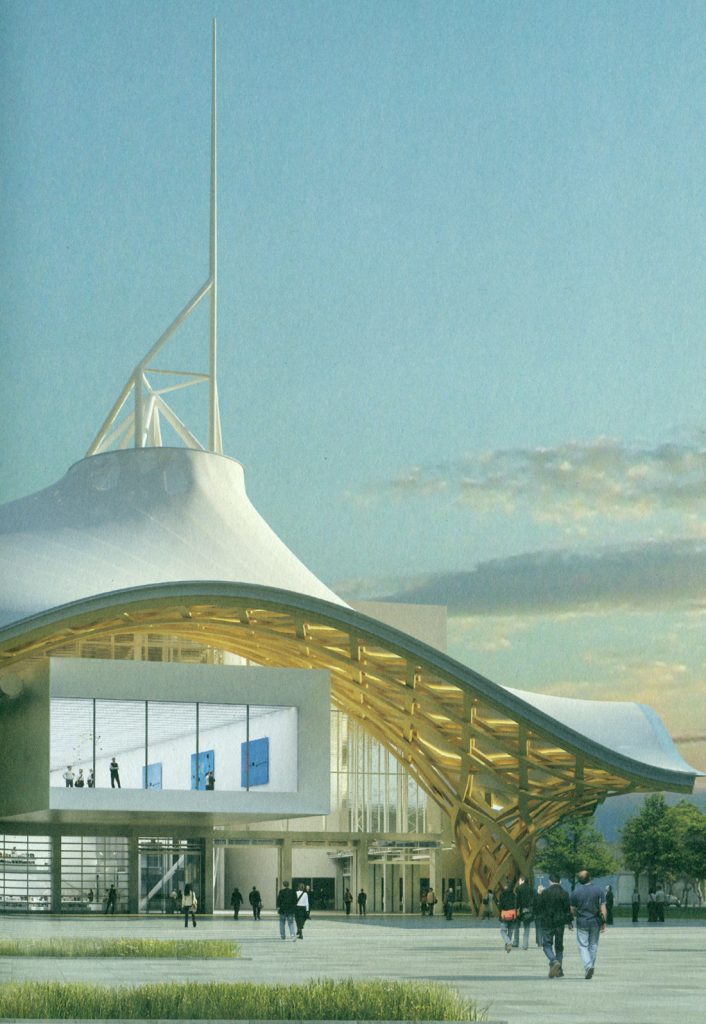 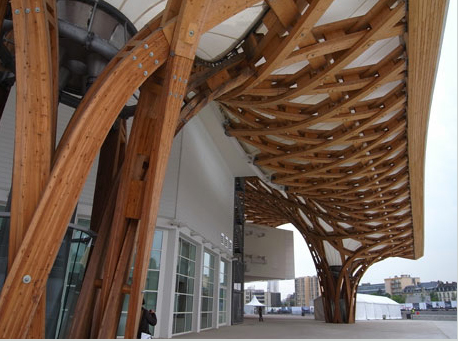 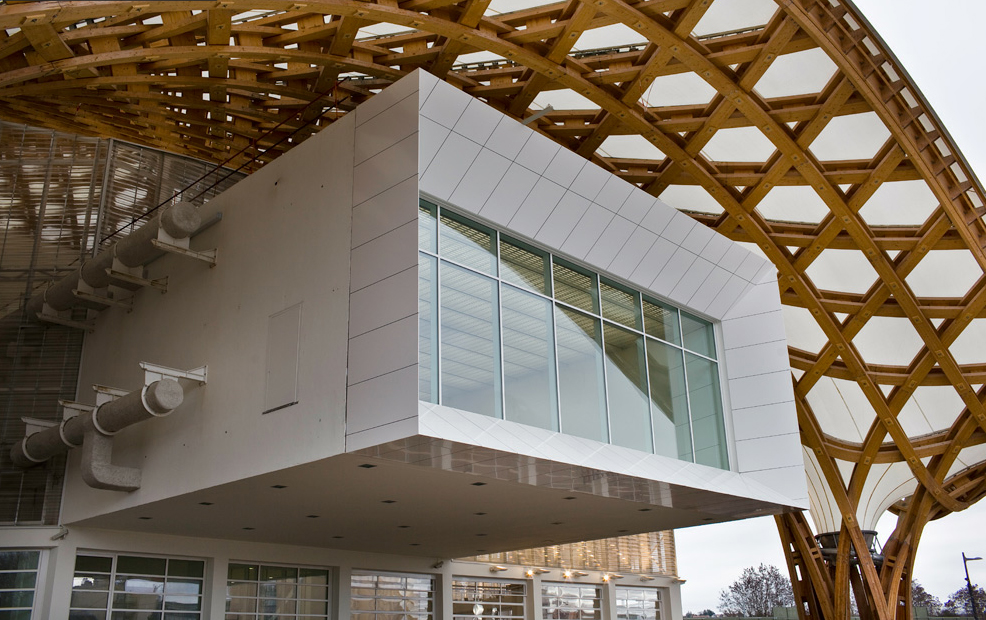 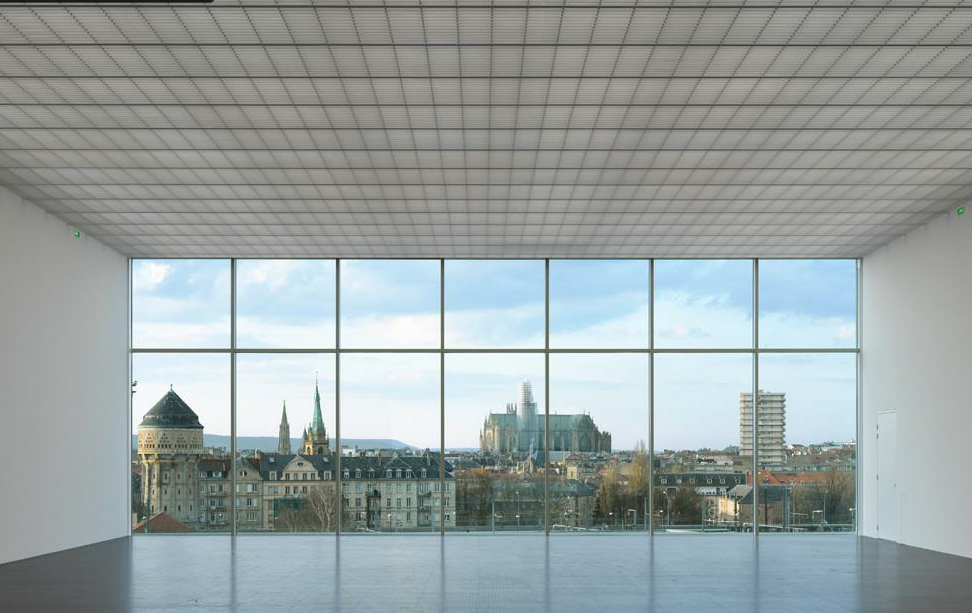 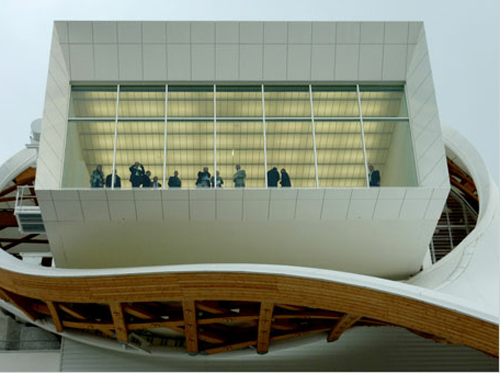 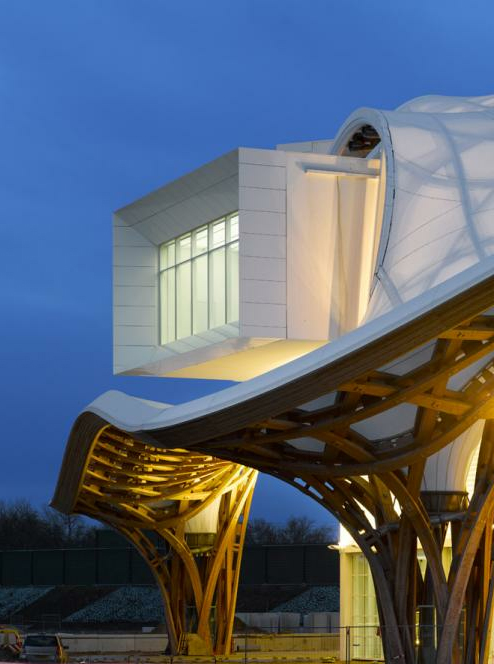 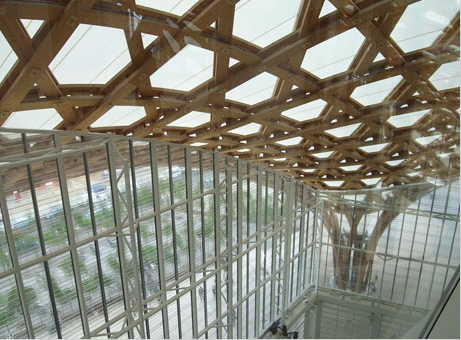 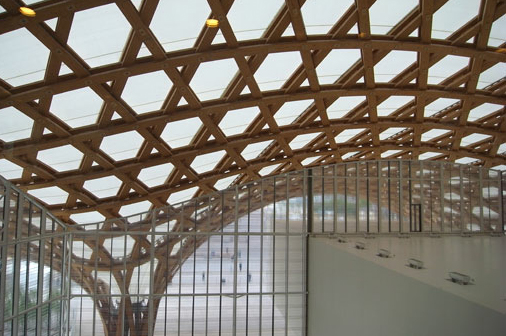