This ingenious structure was first conspired when, in 1971, a competition was proposed for the design of a new cultural center. Architects Richard Rogers and Renzo Piano together created the Center George Pompidou – and won the competition.
Prior to Opening day, many Parisians opposed the idea of putting such an industrial biulding in the middle of their historic Beaubourg neighborhood; however, when the Center opened its doors to the public in December of 1977, their perspectives were altered. since that day, the Center has averaged over 25,000 visitors per day, which makes it one of the most visited attractions in Paris.

The Center George Pompidou is considered to be of the Structural Expressionism/High-Tech style. It is unique in the way that all the functional elemnts of the structure are on the exterior rather than interior. More than that, these elements are color coded: the green pipes are plumbing, blue pipes and ducts are for climate/temperature control, the yellow encase electrical wires, and the red is for circulation elements and safety devices.

Richard Rogers
Richard Rogers was born in Florence Italy in the year 1933. He First attended the Architectural Association School in London before Graduating from Yale University. For a time, Richard and his first wife Sue worked in a partnership with the renowned Norman Foster and his wife Wendy Foster. They called themselves Team 4. Unlike Foster – who’s architecture is sophisticatedly based in technology, Rogers’ designs were enthusiastic and dramatic.

In the year 1970, Richard Rogers decided it was time to move on, and embedded in a partnership with Architect Renzo Piano. This partnership was official formed by the completion and success of the Pompidou Center.
“Rogers’ works reject the classical past while enthusiastically embracing a technological future with its accompanying aesthetic. Although he places emphasis on technology, he believes that it cannot be an end in itself, but must attempt to solve existing social and ecological problems.

His interest in uninterrupted interior spaces has made Rogers an heir to the functionalist tradition. His concern with total flexibility and obvious technical imagery has been termed Late Modern. However, his more recent works have turned to the images of the early Modernists, notably Mendelsohn.” (referenced to Dennis Sharp, The Illustrated Encyclopedia of Architects and Architecture. New York: Quatro Publishing, 1991)

Renzo Piano was born in Genoa Italy in 1937. His grandfather, father, four uncles, and brothers were all contractors. It was only natural the Renzo would fall into lead and become a contractor, however, he chose architecture instead. Renzo studied at Milan Poitechnic Architecture School under the guidance of Franco Albini. After graduating from the Poitechnic in 1964 Piano worked for his father from 1965-1970 and then moved on to work in the offices of Louis I. Kahn in Philadelphia as well as ZS. Makowski in London. Renzo Piano lists his most influential guide as Pierluigi Nervi.
Piano has 2 sons, and 1 daughter (she is currently pursuing a career in architecture).

Located at Les Halles (a densely populated neighborhood medieval) in the city of Paris, this area economically and socially depressed, it was intended to revitalize the competition for a cultural center.

The Center George Pompidou is classified as structural expressionism.

The Pompidou Center took just under half of its solar. The party is over a huge public square as part of the building as it makes the heart-related activities

“The Design of the Center turned the architecture world upside down.” quote NY Times

The Center George Pompidou is classified as structural expressionism.

Structural expressionism, also known as high-tech or late modernism, is mostly associated with structures designed by Richard Rogers, Renzo Piano, or Norman Foster. This style first emerged in the 1970’s and has remained popular to the present day. It was mainly influenced by brilliant technological breakthroughs. The Cultural Center George Pompidou is one of the most idealic examples of structural expressionism; many windows, fewer interior elements allowing for greater space, steel framed, and edging on industrial – yet too creative t be considered so.

Opposing natural schools of thought regarding the structural elements of a building, structural expressionism displays its elements exuberantly. This style is delighted to show off the results of the latest cutting-edge technology that made High-Tech Architecture possible.

Fun Fact: Many of the structural components featured in the Center George Pompidou are solely aesthetic and serve little to no structural role.

The Center George Pompidou was built by GMT and completed in 1977. the total initial cost was 993 million french fancs, however, renovation work was conducted from October of 1996 until January 2000 – which added another 576 million francs.
because this structure was built for a competition, it had to meet specific criteria: interdisciplinarity (involving two or more academic disciplines), freedom of movement and flow, and an open approach to exhibition areas.

The functional elements of the structure were placed ont the exterior to provide a greater interior space for the art exhibitions and other activities. on the west facade of the building there the color-coded ducts that act as a wrapping for the structure; blue is air or climate control, green is plumbing, yellow is electric wires, and circulation elements as well as safety devices are red.
the west main facade is transparent which allows people from the outside to see what is going on inside. the architects (Richard Rogers and Renzo Piano) stated that this was an area of continuity that linked the city with the center.

Unfortunately, due to the overwhelming number of visitors (about 7 milion per day) the Center soon began to age prematurely and closed in October of 1996 until January 2000. during this time, 70,000 square meters were renovated and about 8,000 square meters were added (mostly to display collections). this renovation included moving the offices outside of the center.

It is a building in two parts:

1. Three levels of infrastructure where they gather technical facilities and service,

2. a large glass and steel superstructure of seven levels, including the terrace and the mezzanine, which concentrates most sectors of activity of the Center, with the exception of Ircam, located in the plaza Stravinsky

Despite all the pipes and bars no longer see the facades of the Pompidou, the interior is quite bright as the glass is continuous. By passing all the roofs inside the piping and that there are elements in the facades, all these elements are in sight. In this way, within the building will get the same picture of chaos and mass of its own technological elements from outside. Renzo Piano placed on each piece of art for a small ceiling visually protect the network of pipes that are in the roof and avoid the gaze be distracted looking at the work exposed.

The frame consists of 14 metal gates that hold a lamp with 13 sections of 48 m each, spaced by 12.80 m. On the poles in each level, articulate elements of cast steel called gerberettes of 8 m long and 10 tons.

The beams of a length of 45 m, are based on these gerberettes, which carry the weight and balance poles anchored by bracing bars. Each plant has a height of 7 m between floor and ceiling. The superstructure of steel and glass surrounding the great hidden spaces.

Building facilities have a number of colors used to code the visitor knows the function of each element. The pieces painted red fulfill the role of communication (elevators and stairs), blue is the air conditioning, green water facilities, electricity is yellow, and white jacks and air extraction. The stairs outside the front of the plaza has forged inclined painted red. The stairs, which are mechanical, are covered by a transparent circular tube. They are divided into several shots, and each section is an area that communicates with a flat floor. Inside the tube there are many technological elements to hinder the perception of space. 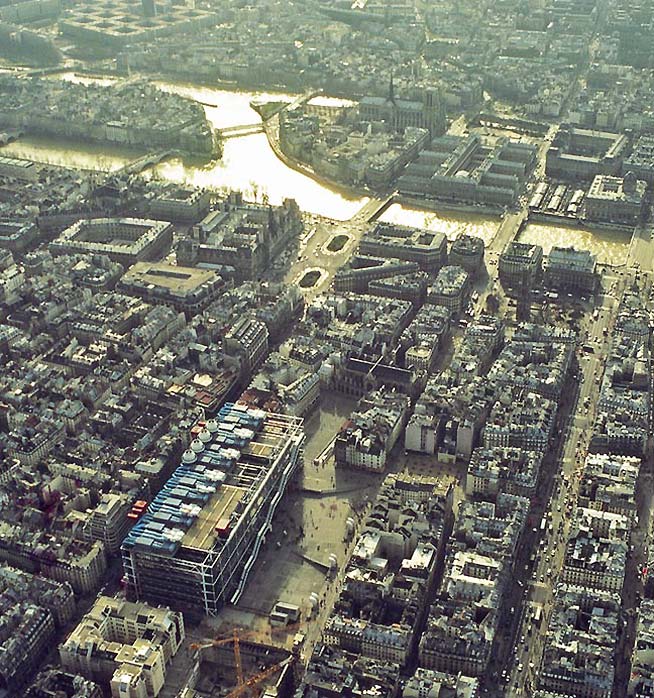 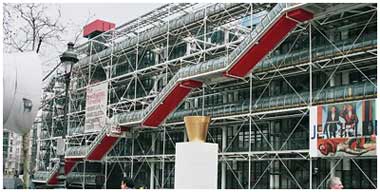 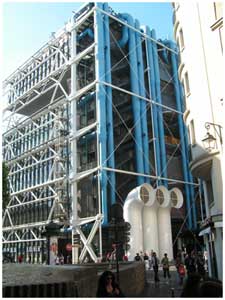 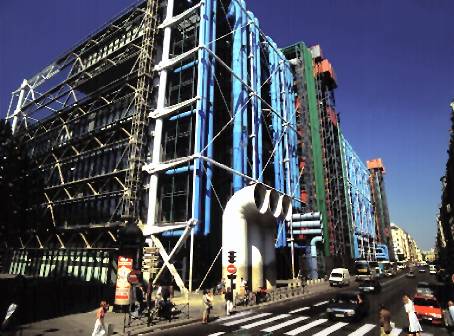 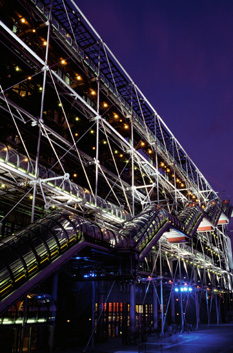 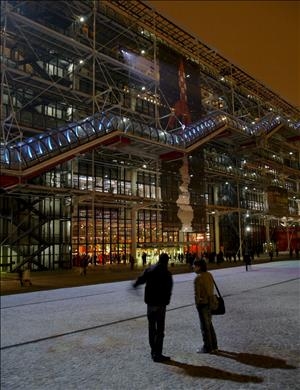 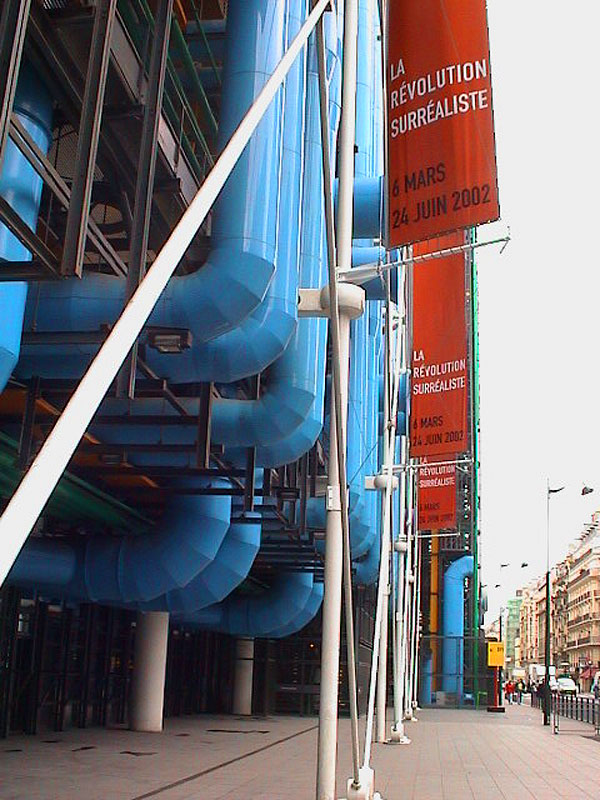 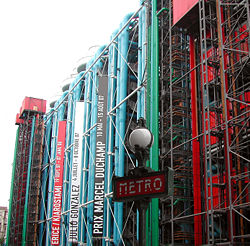 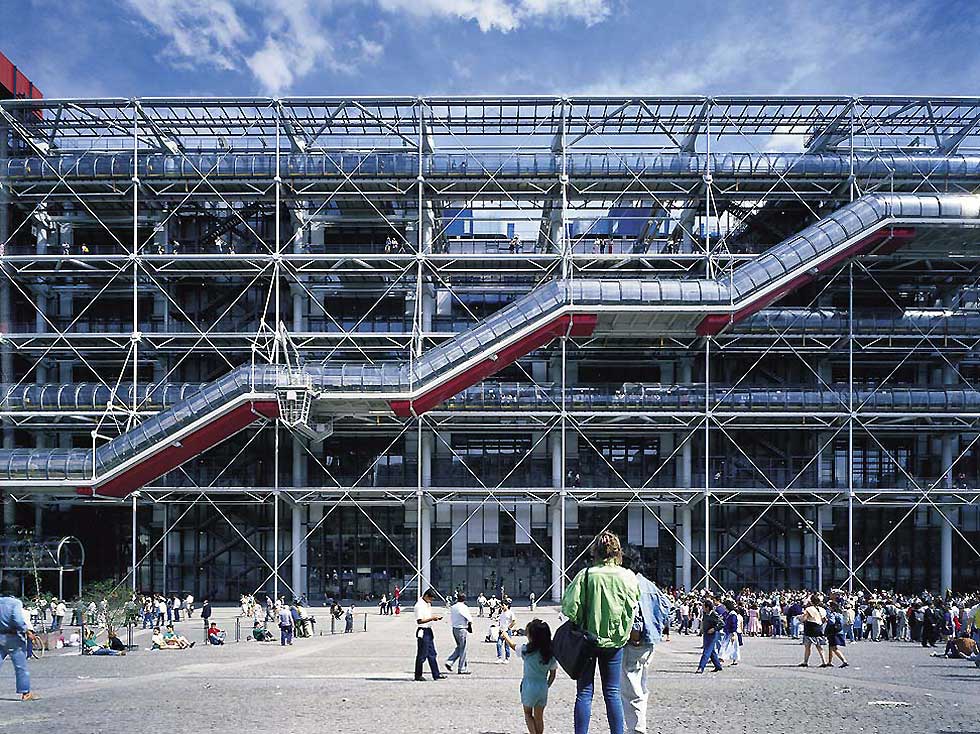 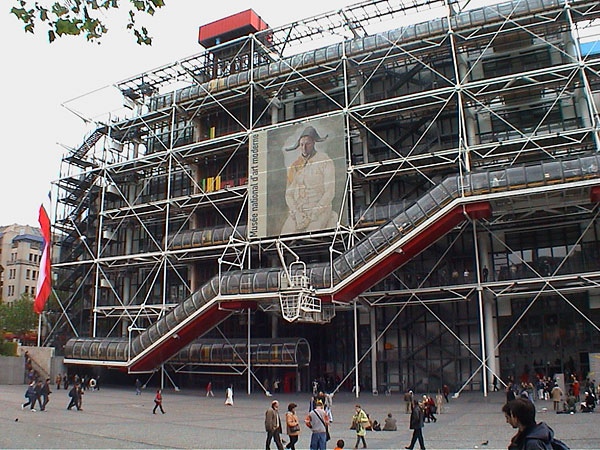 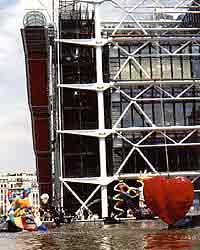 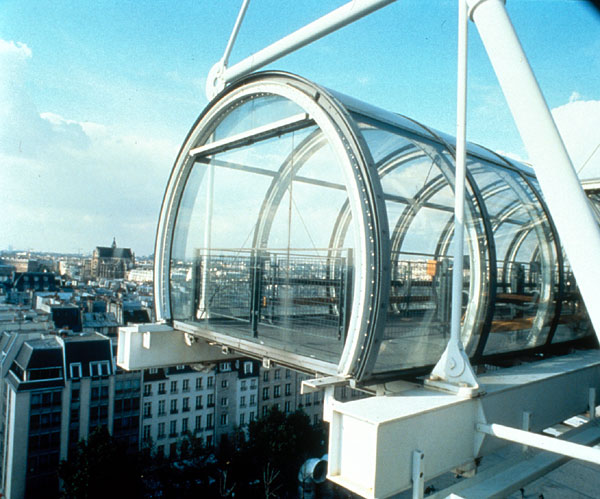 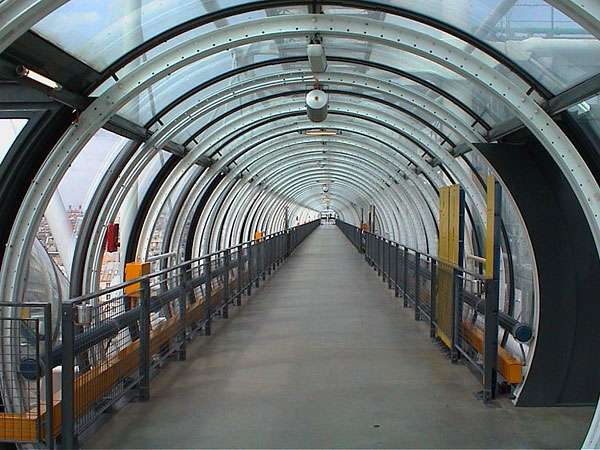 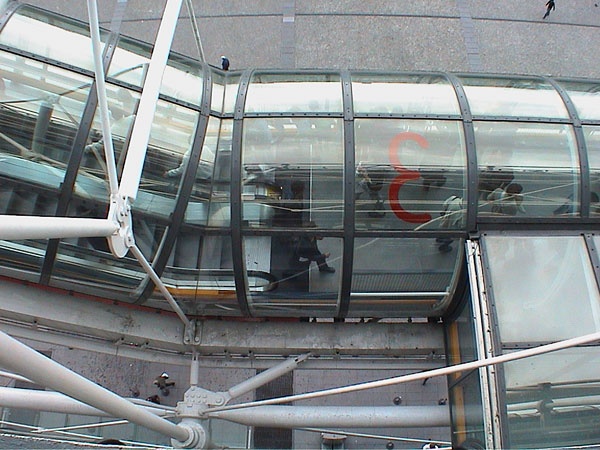 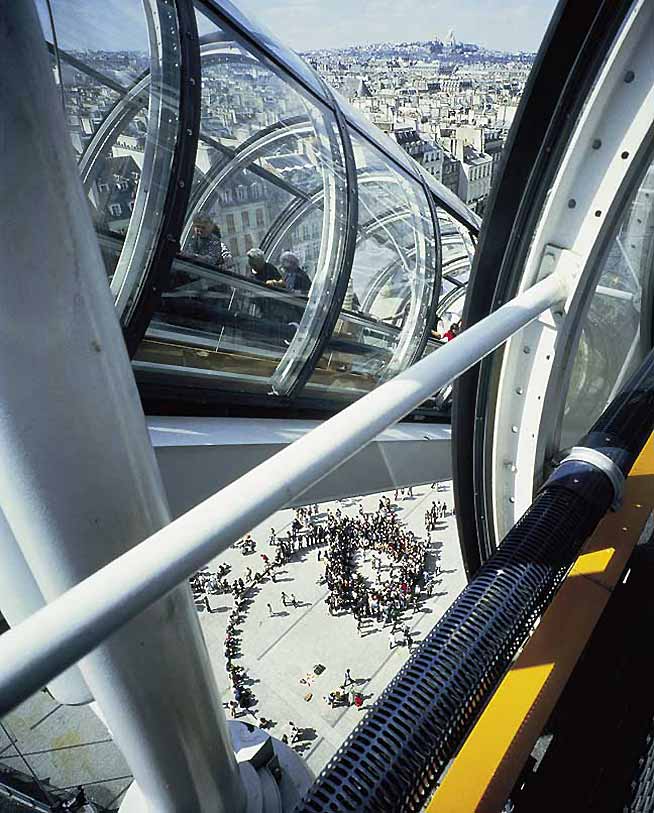 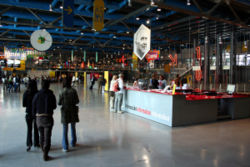 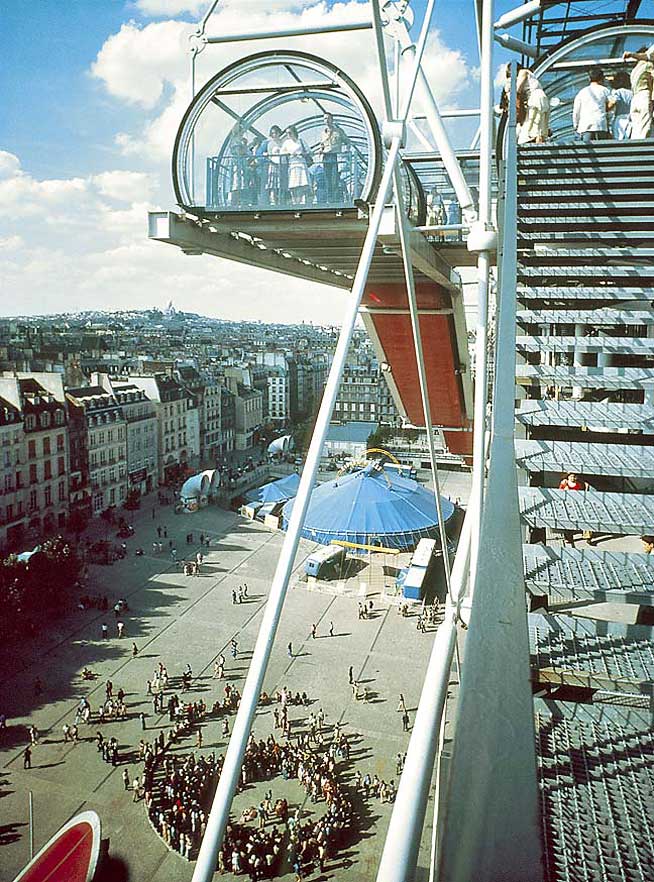