In 1950, Frank Lloyd Wright designed a house for his son David and his daughter-in-law Gladys. The design raised the house spirally from the desert floor, turning the treetops into the grass and offering 360º views of the mountains that make up the valley.

Completed in 1952 is one of three spiral designs made by the architect, the others are the Morris gift shop in San Francisco and the Guggenheim Museum in New York City. Ling Po, one of the last draftsmen of Wright’s works, refers to this house as “… the last masterpiece of Mr. Frank Lloyd Wright …”

David and Gladys Wright lived in the house until his death. David died in 1997 at the age of 102 and Gladys in 2008 with 104. After the death of Gladys the house fell into disrepair until in 2012, under threat of demolition, Zach Rawling, a Las Vegas lawyer, bought it with plans to restore the building and open it to the public. On June 8, 2017, the house was donated to benefit the Taliesin School of Architecture and be used as a learning center for graduate architecture students and for philanthropy, academic conferences and community meetings.

The house is located on a 22,581m2 plot, amid citrus plantations at the base of Camelback Mountain, in the Arcadia neighborhood of Phoenix, Arizona, United States, a short drive from Taliesin West and even closer to the Co Santi de Paolo Soleri.

David and Gladys Wright commissioned Wright to design a home for them in Phoenix. For this house Wright made a project drawing the world heritage of architecture with references to ancient circular elements reminiscent of the great kivas and towers of the Ancestral People that are located in Mesa Verde and the Chaco Canyon, towns in the southwest of the United States. It also refers to the spiral ramp of the Minaret of the Great Mosque of Samara. For the ornate construction of Mayan blocks and tiles evoked those found in sites such as Copán, and includes a hat tip corresponding to Greek architectures, or to architect Louis Sullivan as seen in its dentate ornamentation at the exterior level of the floor that also remember the “Textile Block” used in the Arizona Biltmore.

“… Living in the desert is the spiritual catharsis that many people need. I am one of them… ”, Frank Lloyd Wright

Some critics have opined that this construction for a home is “ugly” although we all know that beauty is truly in the eyes of the beholder. Frank Lloyd Wright‘s beauty was in his philosophy of organic architecture and how a structure should be in harmony with nature. The house that is hidden among a citrus grove does not seem to fit with the surrounding modern houses that have been built since 1951. Since then, there has been a lack of harmony, square houses around a circle.

The house made with concrete blocks and with an area of ​​232m2 was built on columns to provide views of the citrus orchard, the central courtyard and the surrounding desert. A deep pool and a shaded garden have been built in the courtyard.

It has a raised spiral design of the ground to help, according to Wright, cool it by capturing the desert breezes. It has a long and curved entrance ramp, turret style, which leads to the second level where the access to the house is located and which anticipates the design of the Solomon R. Guggenheim Museum in New York and which in this case frames the central courtyard . There is another spiral ramp that leads to a terrace above the living room, wrapping the kitchen, where you can enjoy the magnificent views of Camelback Mountain.

The curvy floor locates the living room in the center, the kitchen in the northwest and the 3 bedrooms and 4 bathrooms aligned in the southeast. The master bedroom at the southeast end has 270º panoramic views.

The living room has floor-to-ceiling windows on both sides, with sealed mahogany plank ceilings. Both the living room and the master bedroom have conical fireplaces.

In contrast to the main house curve the guest house is rectangular, with an area of ​​33m2, a straight linear structure oriented mainly to the south to receive the winter sun. The guest house is essentially an efficient apartment with a single deep room that has a kitchen, a place to eat, another to sleep and a bathroom.

At the west end of the house, between two warehouses, there is an open and covered parking lot, with capacity for two cars.

The plan of the David Wright House is circular, with a curved ramp in the northeast that leads to the house facing southwest, leaving a circular central courtyard. The main floor rests on columns made of concrete blocks on which a cantilever concrete slab is supported, which also supports exterior walls of exposed gray concrete blocks.

The house was built with curved concrete blocks with soffits and wooden windows. The crystals that close the windows are simple.

The cover is made of diagonally placed sheet and painted in turquoise to resemble oxidized copper.

Philippine mahogany was used for ceilings, carpentry, cabinets and furniture. The floor is concrete, but the Wright designed a beautiful carpet to cover it. The carpet and furniture of the firm “March Balloons” in the living room were also designed by Wright.

The guest house is built with materials similar to those of the main house, exposed blocks of gray concrete inside and out, mahogany board ceilings, covered with diagonally placed metal plates and doors, windows and mahogany frames. 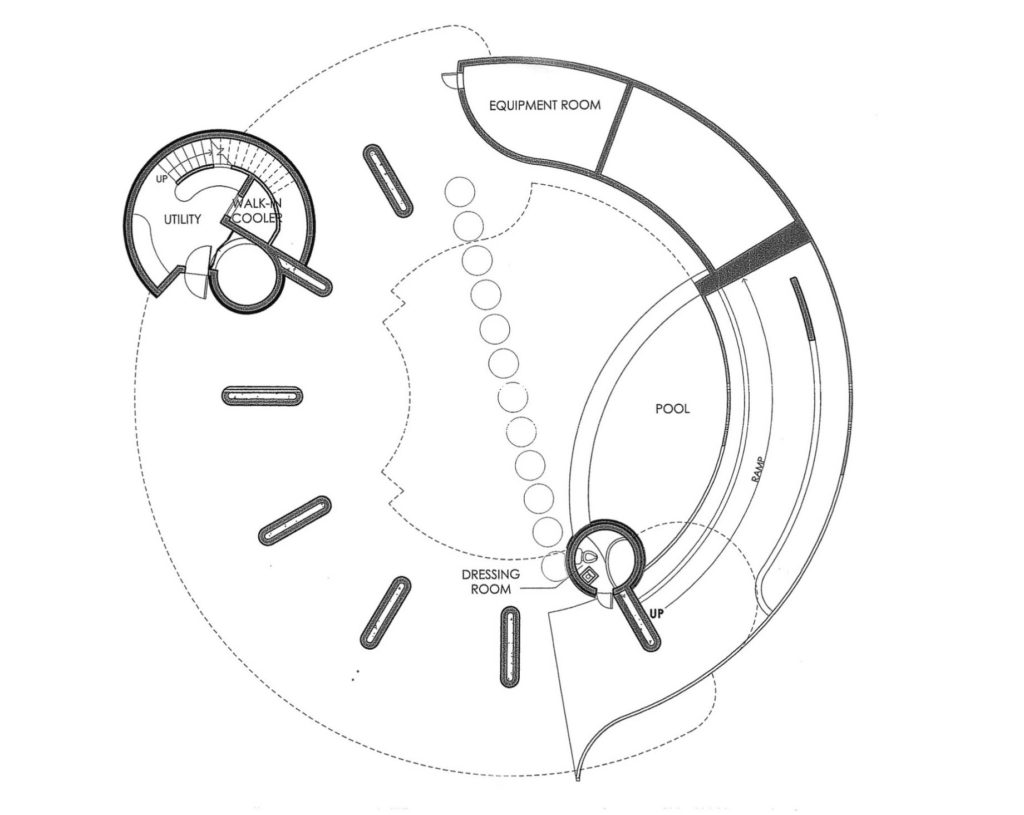 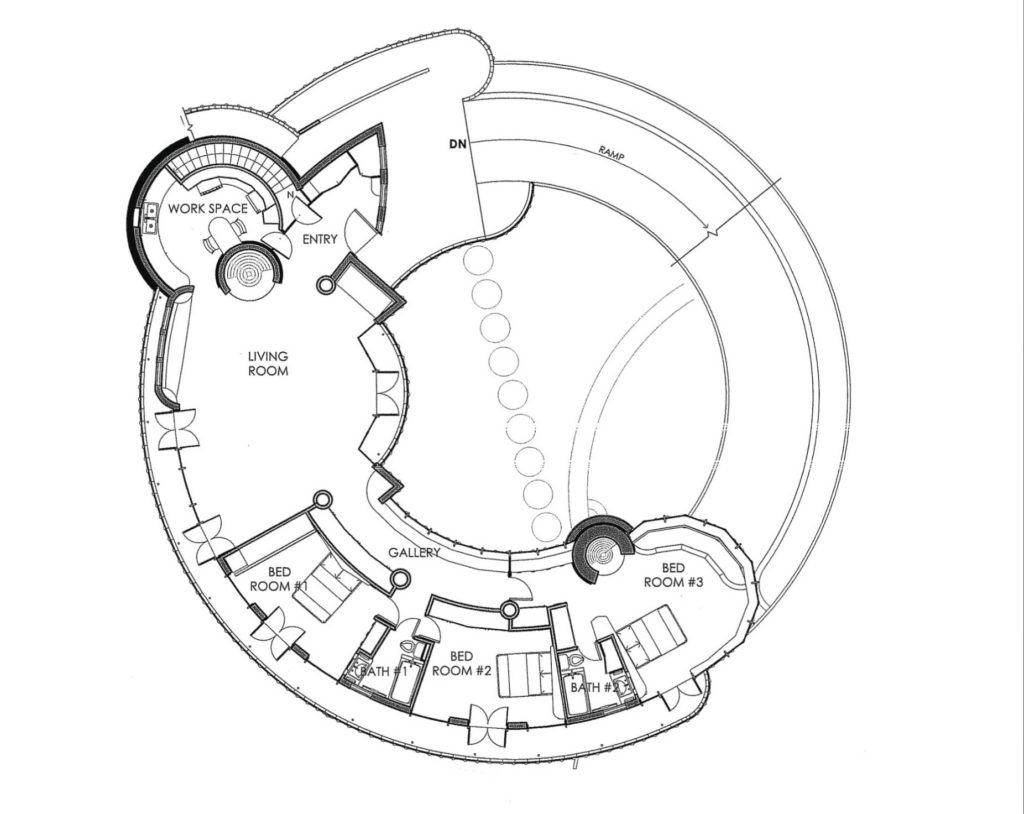 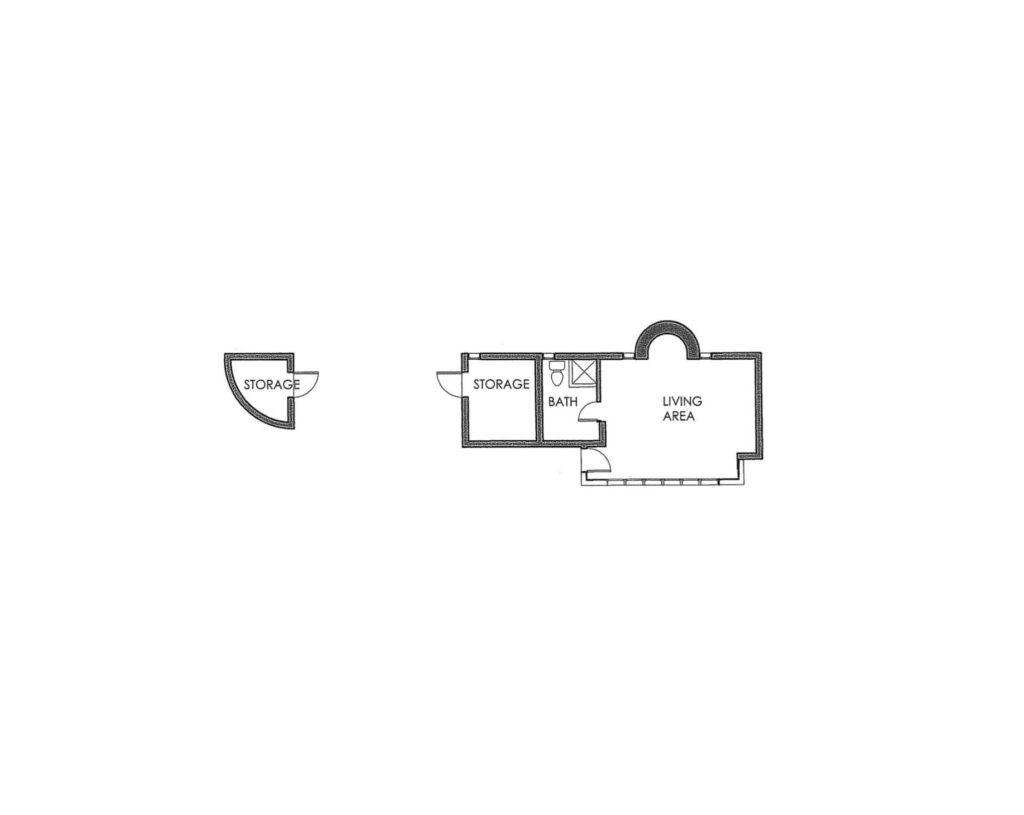 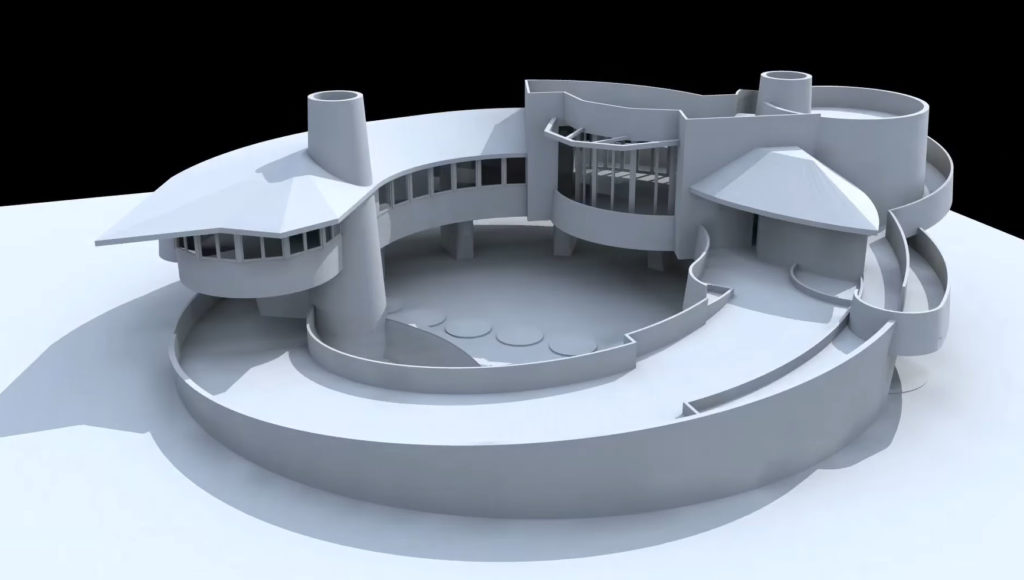 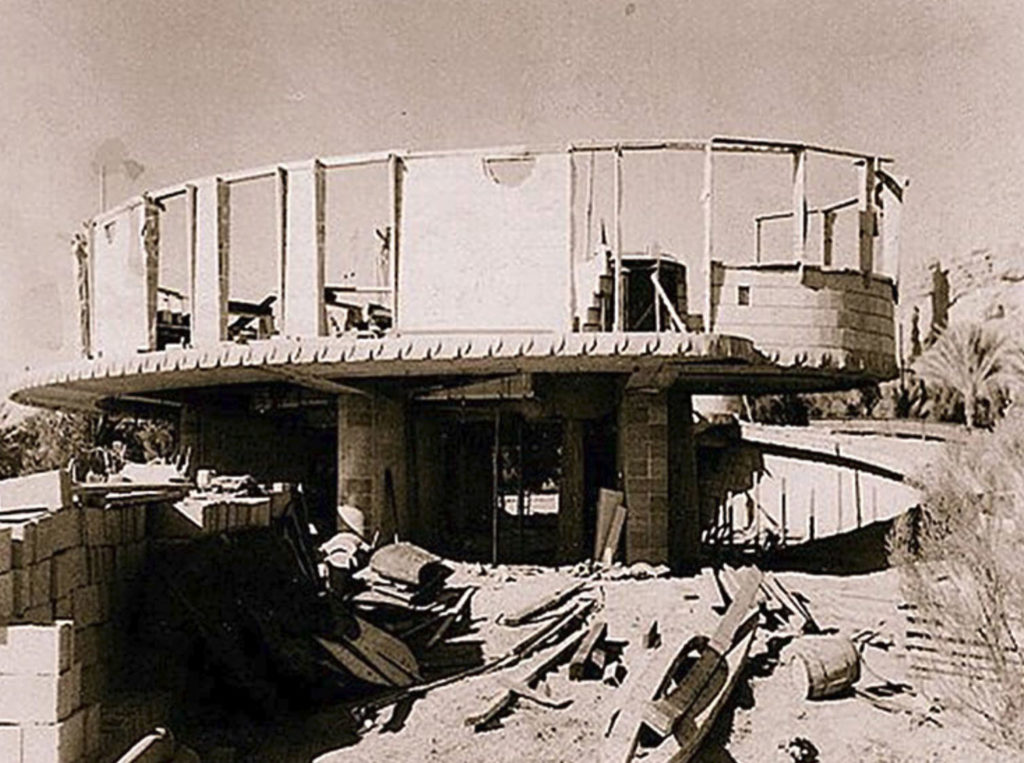 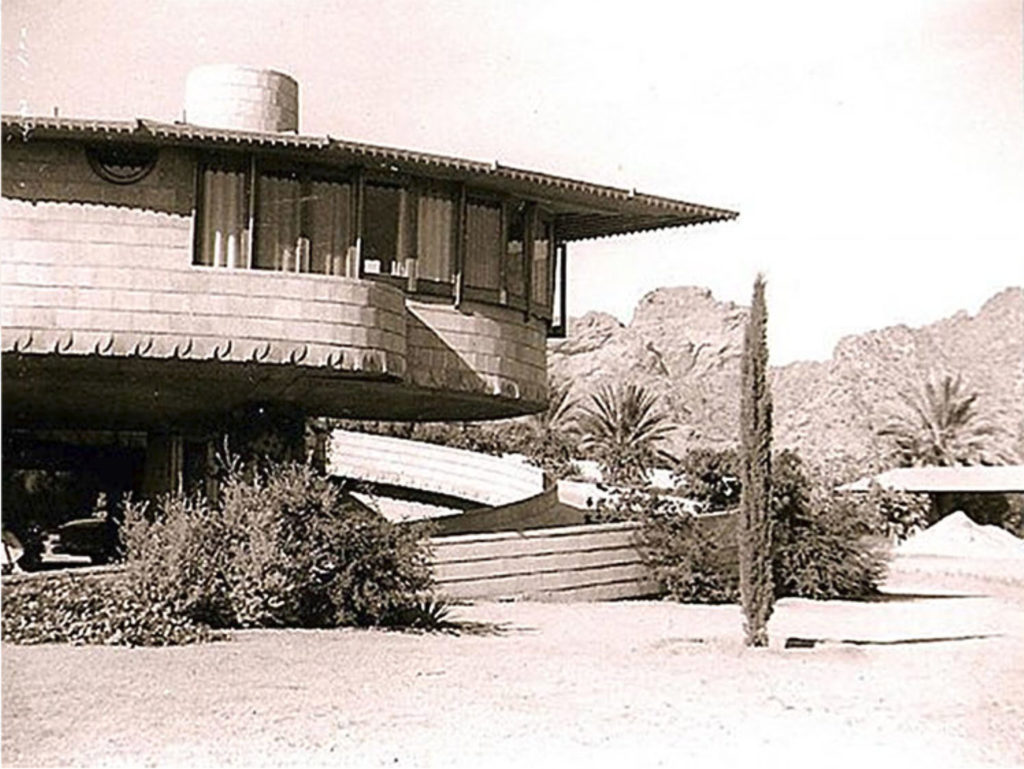 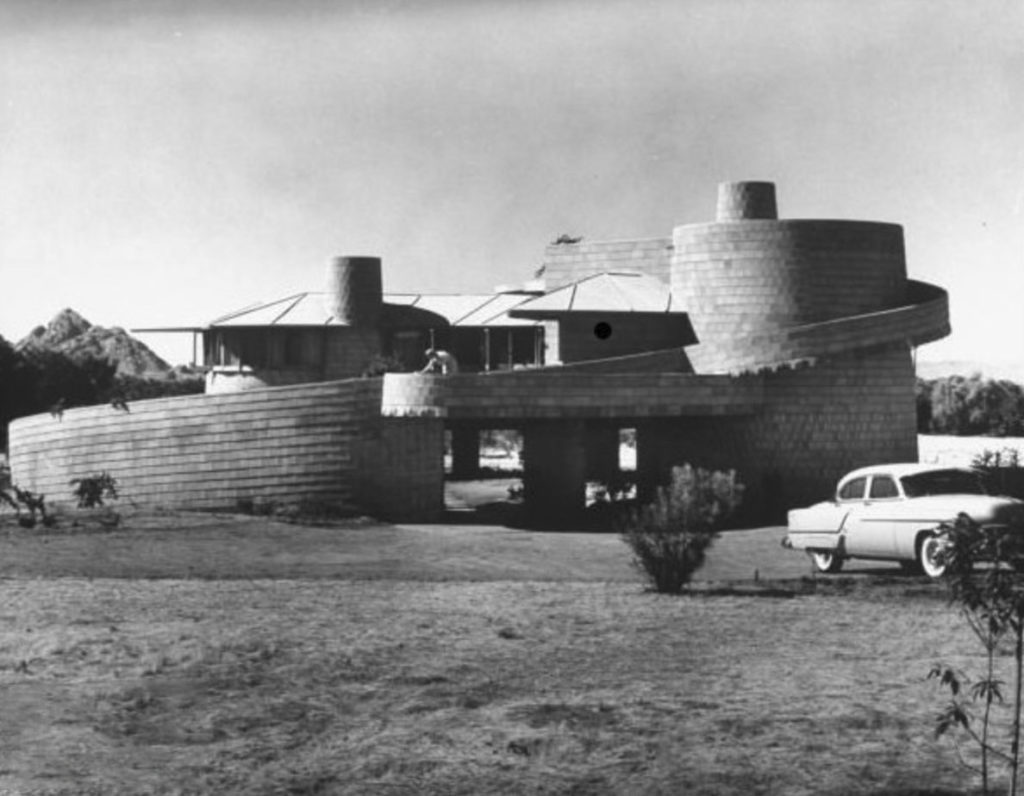 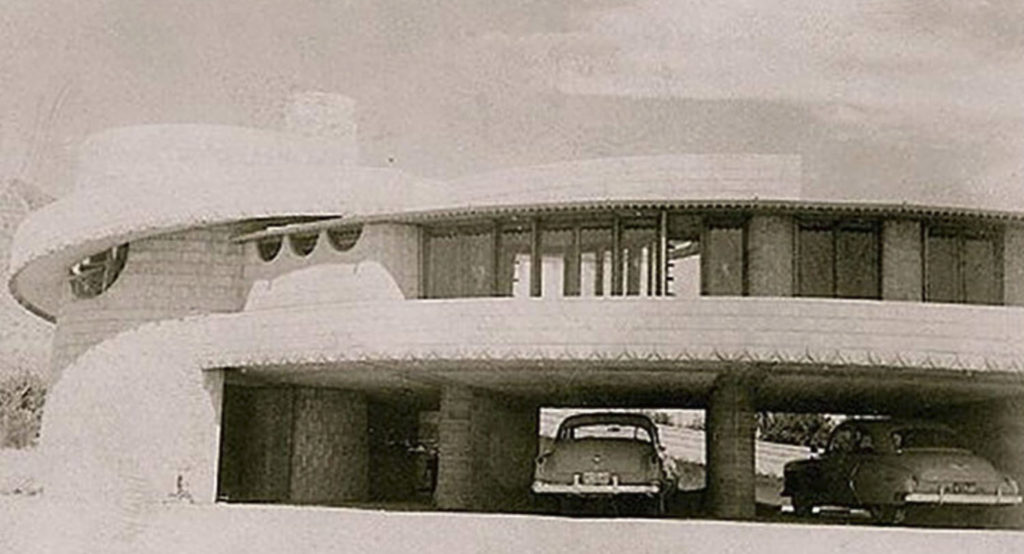 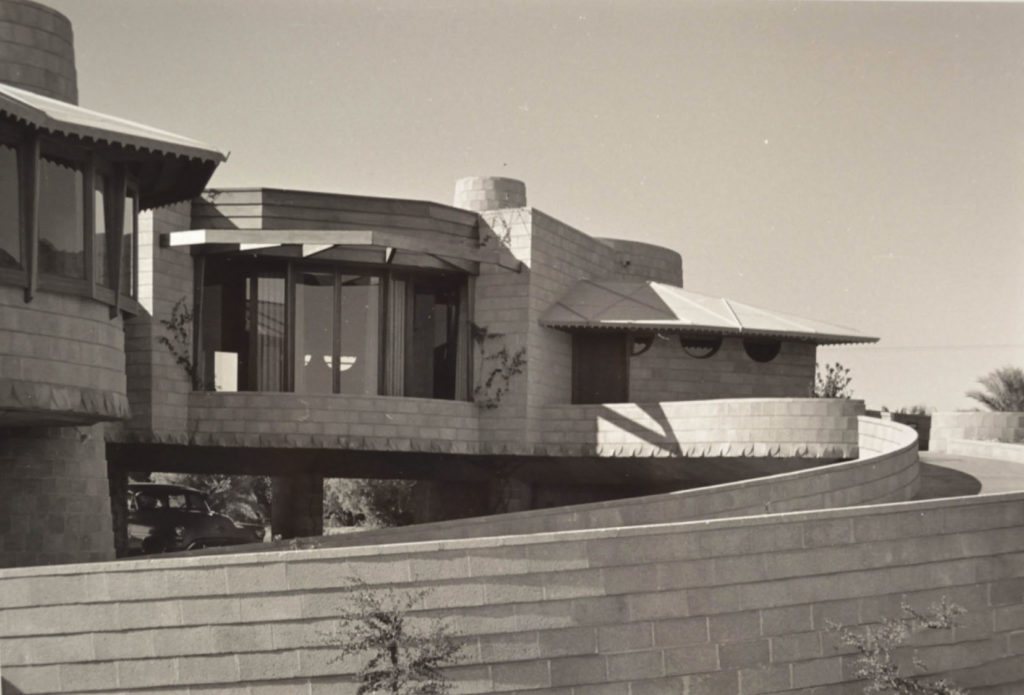 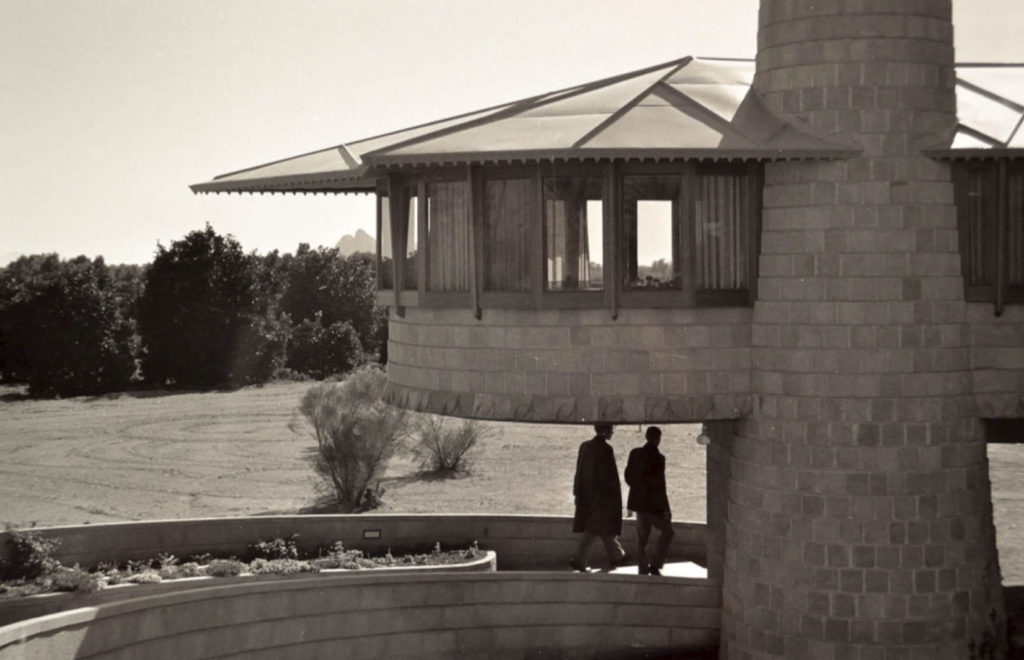 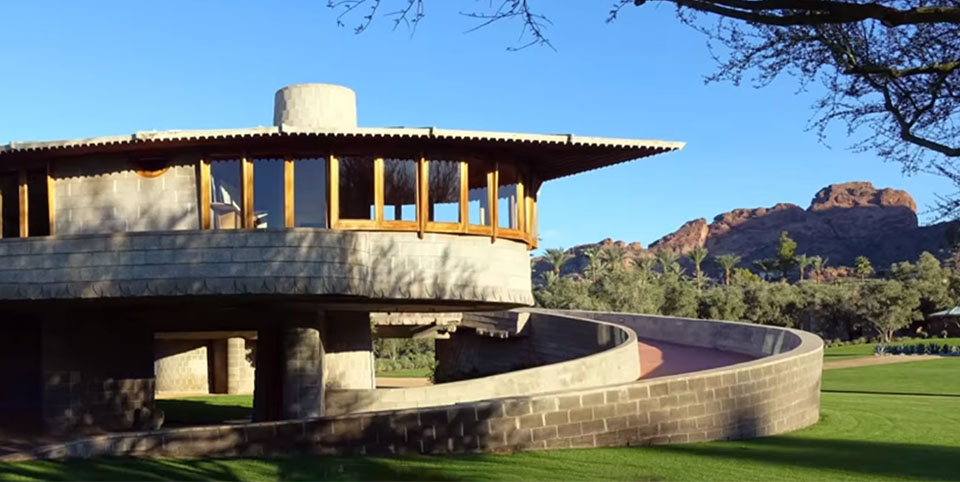 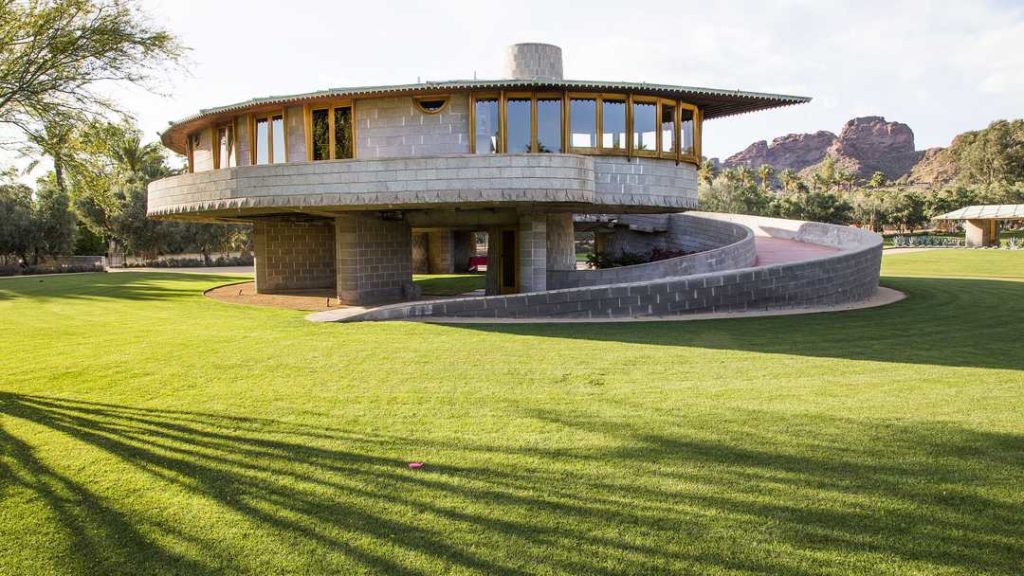 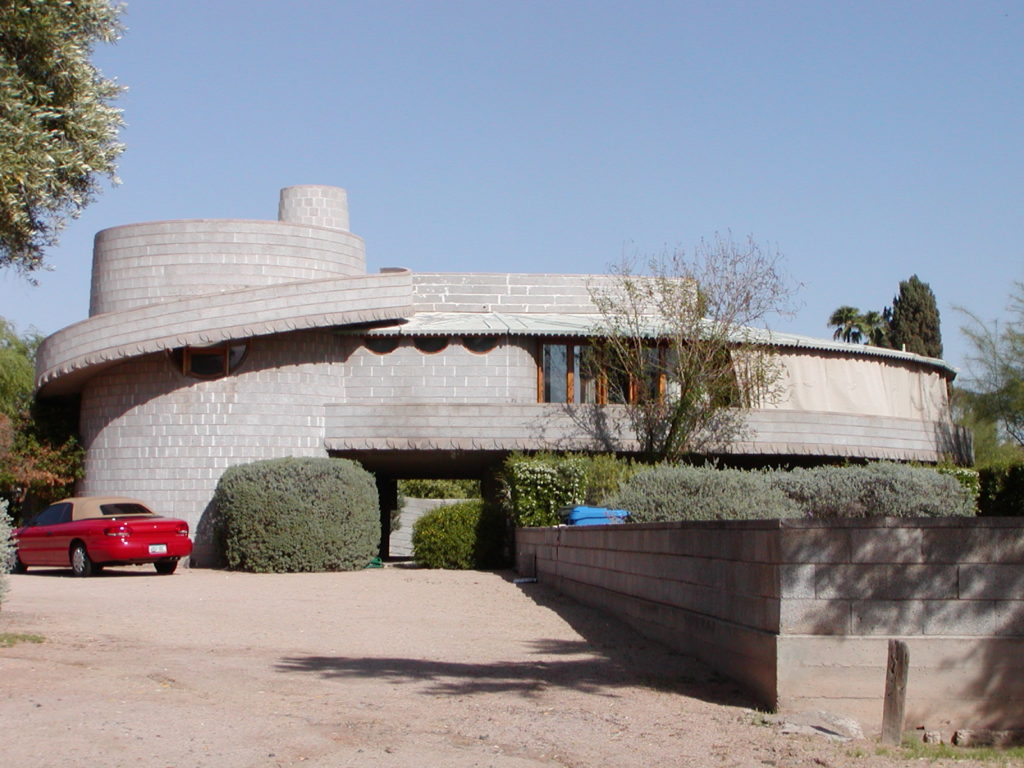 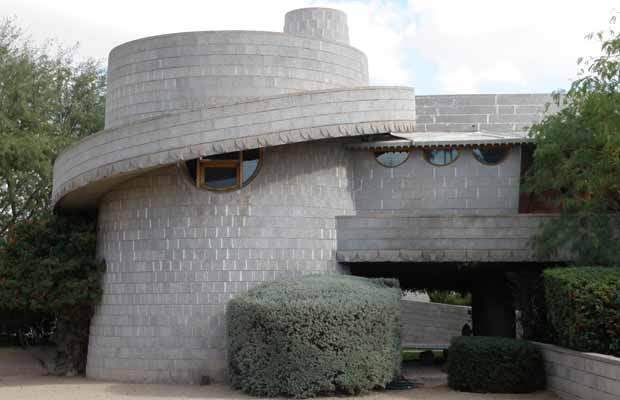 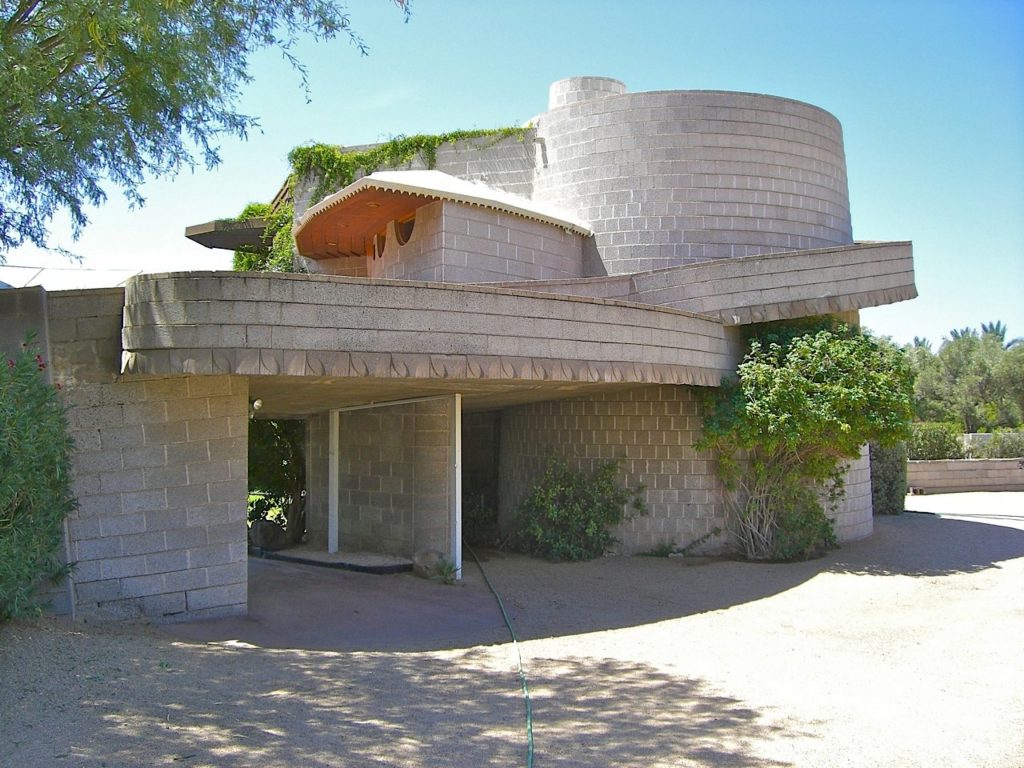 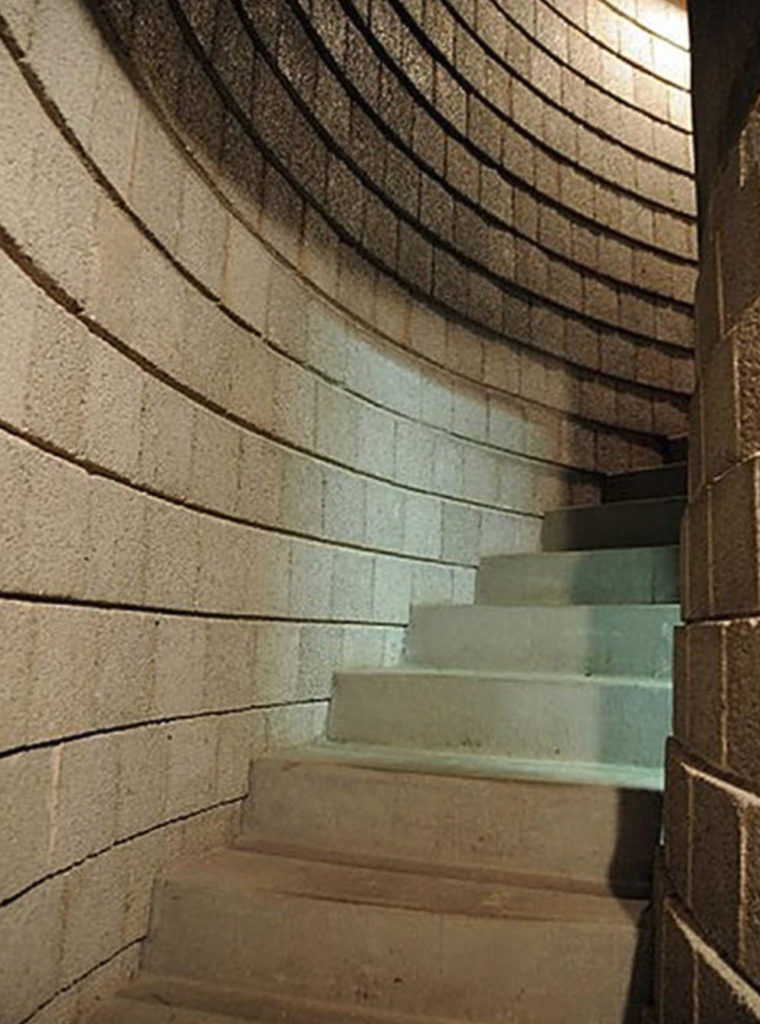 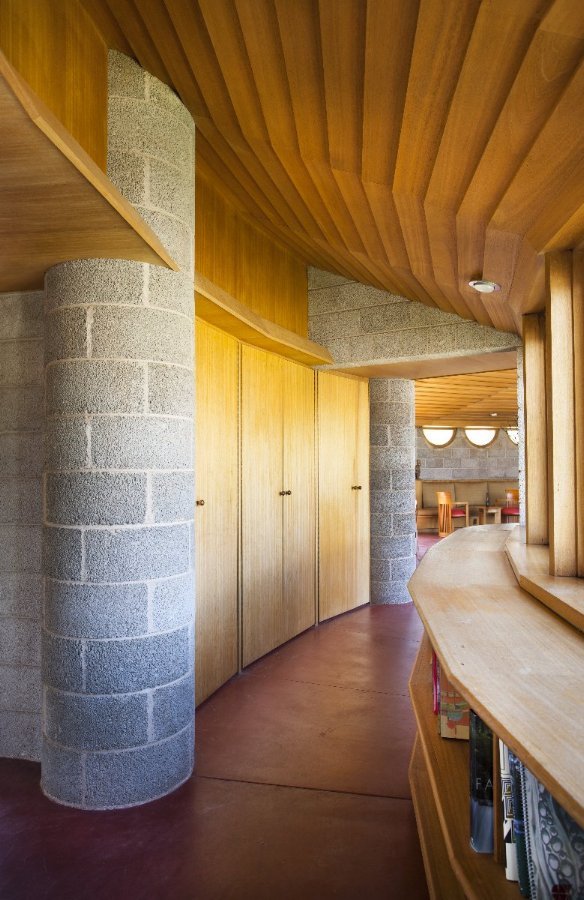 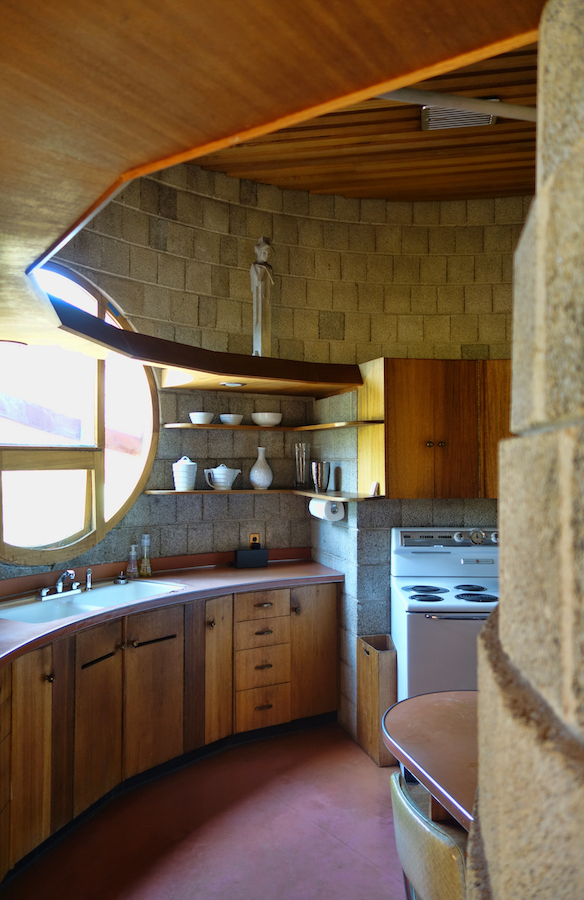 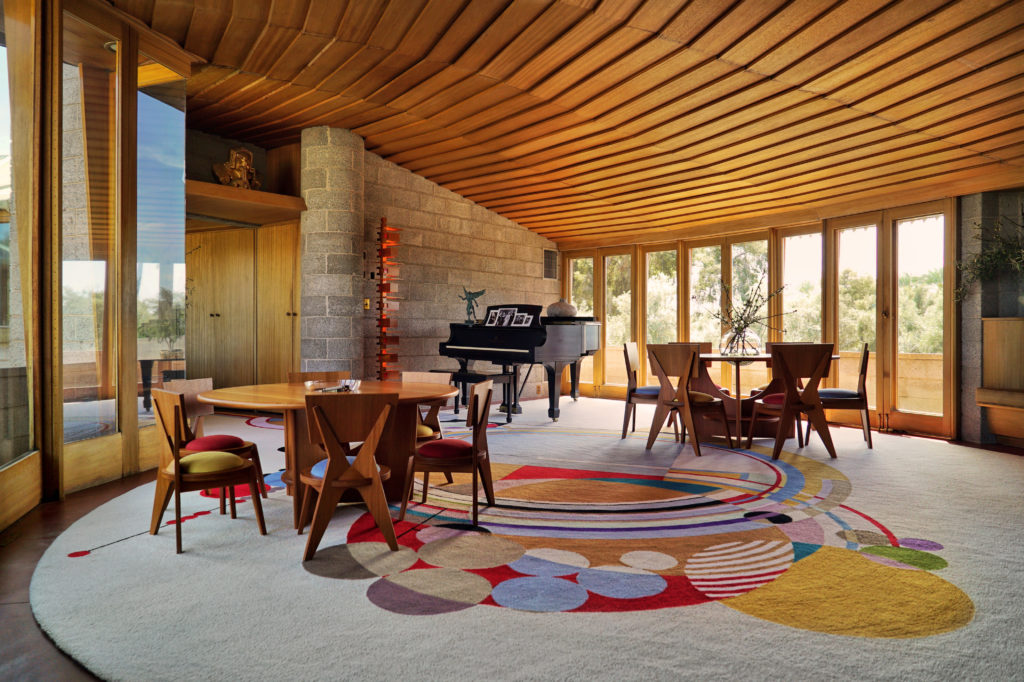 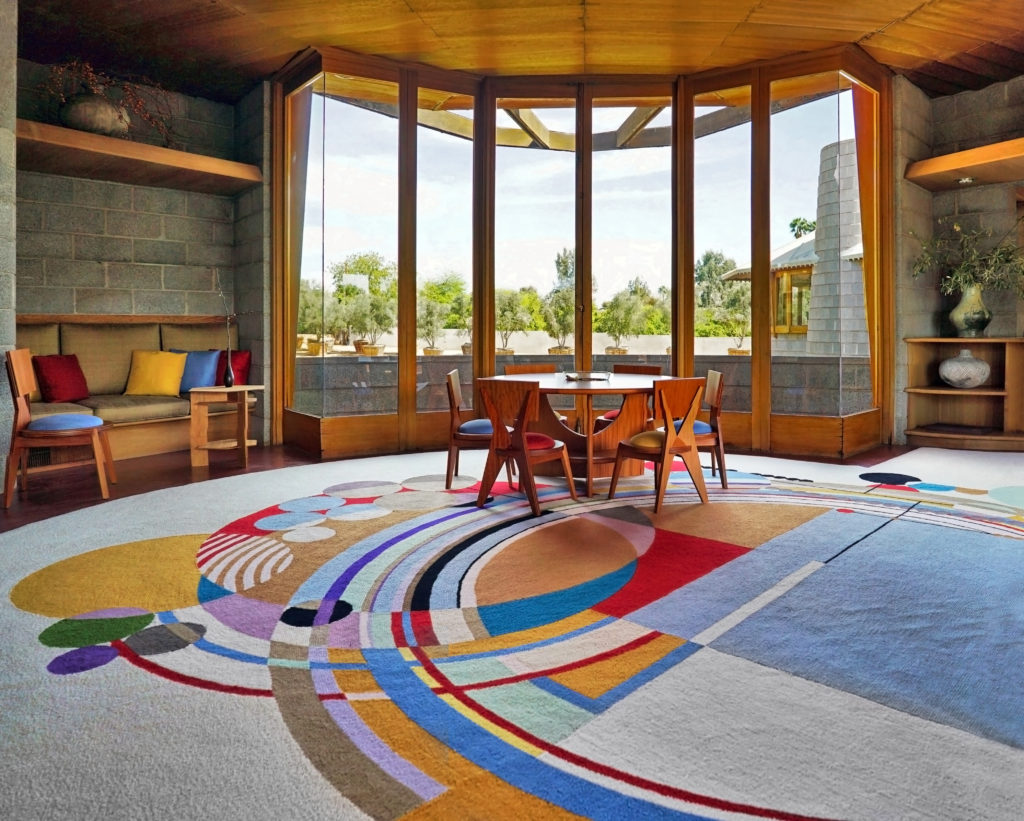 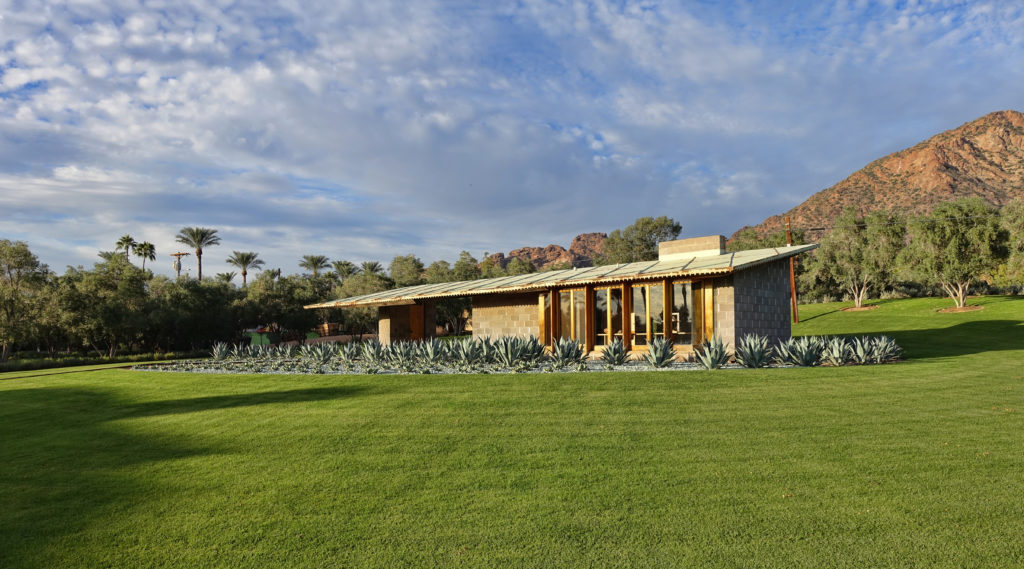 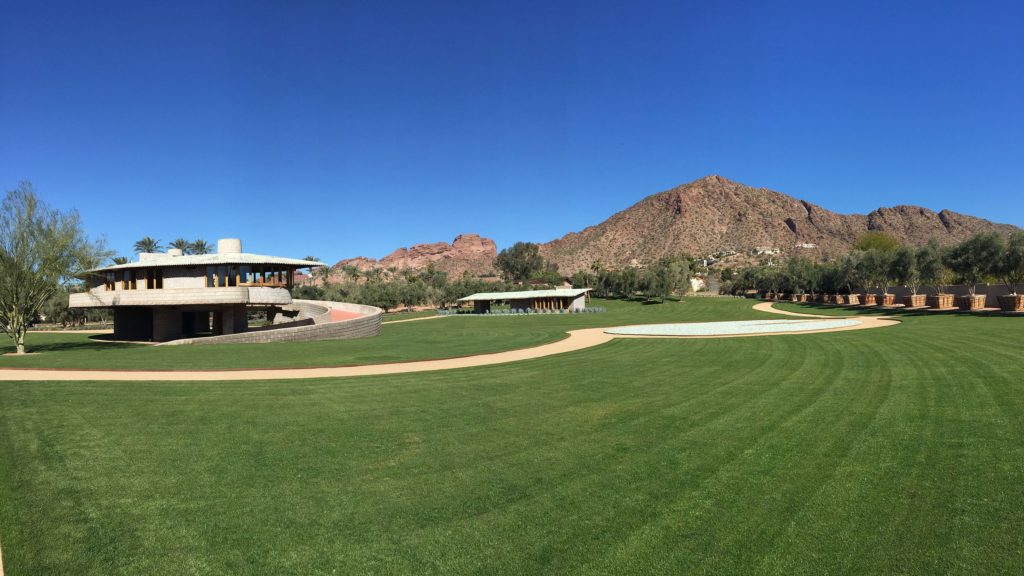