The tower designed by architects Mark Hemel and Barbara Kuit of Dutch study IBA is one of the most spectacular structures of recent times. With a height of 612m becomes the highest TV tower in the world, surpassing the CN Tower in Toronto with 553m.
The design was won by Dutch studio IBA in 2004, during an international competition in which participated among others Richard Rogers, Coop Himmelblau, KPF and Cannon Design.

The Guangzhou TV Tower is a simple and funny symbol that represents and rejuvenates the centenary industrial center of Canton, 10 million people, in the ambition to be known as a progressive and environmentally sensitive metropolis, a modern city that invests in the keywords cultural and environmental improvements.

The Tower is located in Guangzhou, formerly Canton, in Yuejiang Road West / Yiyuan Road, Haizhu District, China. Guangzhou (广州), known historically as Canton, or less commonly, as Kwangchow, is the capital and largest city of Guangdong province, People’s Republic of China. Located on the Pearl River, about 120 km northwest of Hong Kong and northeast of Macao, Guangzhou is a key national transportation center and trading port.

The Guangzhou government announced it is the most beautiful and graceful as well as being a technologically advanced design tower, representing the city’s ambitions to become the most modern and progressive industrial region in the country. 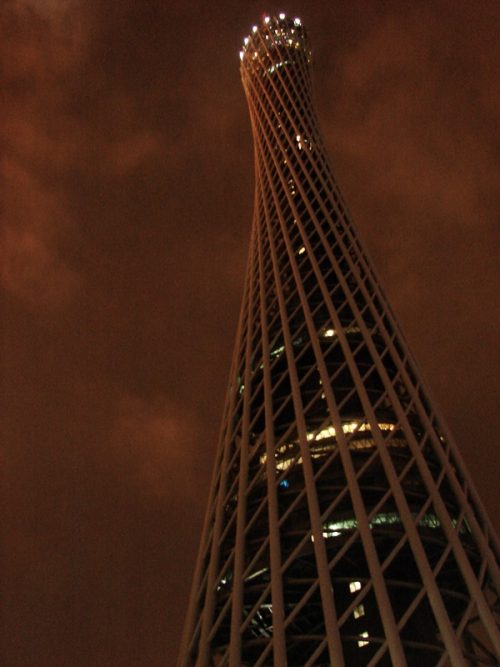 Mark Hemel comments: “… When most skyscrapers have “male” features, being introvert, strong, straight, rectangular, and based on repetition, we wanted to create a tower “female”, complex, transparent, curvy and gracious. Our goal was to design a free-form tower with a rich, human-like that would represent Guangzhou as a dynamic and exciting city identity. therefore wanted it to be not symmetrical to see the building moving and “live”, the result is a tower-shaped “sexy woman”, the same reason that earned him the nickname “Xiao Yao Man”which means “young girl with narrow waist…”

The concept of the tower is the simple idea of a twisted tower resulting in a complex and challenging design.
On the basis of international competition required not only to design the TV tower but the design of a park of 17.9 hectares at its base and a master plan for the surrounding 56.6 acres, including an elevated plaza, also called a park pagoda, commercial facilities, offices, a television station and a hotel.

The design presented by the IBA study gave equal attention to the design of the tower as the integration of the location and the city that surrounds it, why it was selected as one of three presentations that competed in a second phase. After a second presentation phase and several months of negotiations, the design of Mark Hemel and Barbara Kuit the winner.

Architects, expressed that his goal was to create a tower that proves enjoyable for people, a tower would not feel massive or parent that instead invite people to come. They also wanted to make the tower prove rich in physical experiences. There are, for example, a pedestrian bridge, a spiral staircase outdoors, which takes visitors through the “waist ” of the building. And at the top, there is also a large pitched roof panoramic, air ( 54m x 42m ), where one can sit and enjoy the view as the wind in your face feel.

The tower, playful and devoted Guangzhou TV program devoted 37 stories to visitors, including exhibition spaces, a conference center, a cinema, restaurants, cafes and observation decks. A deck at the base of the tower hides the giant building functional works.

All connections infrastructure, metro stations or bus, and a pedestrian link to the north bank of the river, are underground. This level is consistent with other facilities such as a museum, a food court, a large retail space and a parking area for 600 vehicles tourist buses. The input operates on two levels, one after the landscape above ground, the other connected to the underground mass transit facilities and parking. Low-speed elevators with panoramic views along with other high- speed and double platform serving both input levels.

The intermediate zone between 80 and 170m tall houses the 4D cinema, a play area, restaurants, cafes and outdoor gardens with teahouses.

The area above the building begins above the stairway and houses several technical functions as well as a two-storey revolving restaurant in the +428 level, a buffer and higher levels of observation. From the top observatories is possible to climb even higher, through a new set of stairs, to a terraced observation square, above the upper ring of the tower, above the booming city of Guangzhou.

There are several viewing platforms along the tower, some designed as outdoor gardens on level +32.8 and +116 m. Others are internal, in level +168,+454 and +459.2m. The covers are attached inside fully glazed triangular “boxes” that protrude several meters outside the building. These give visitors the opportunity to go outside the building and a panoramic, unobstructed view of the city around them. These boxes have a glass floor, making the experience even more exciting exit the building while looking at the ground. 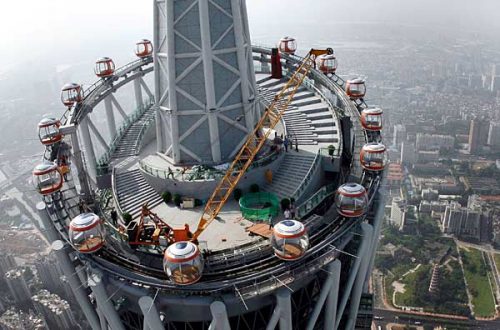 Located at 460m tall, the latest platform is designed as an inclined elliptical square 54 x 42 meters, where one can sit and enjoy the panoramic view. Here you can feel the effects of the “super structure” physically, the temperature drop, seen in the distance on clear days, taste the clouds on an overcast day, and can feel the influence of wind on the structure.

The top shaved diagonally, not north – south central axis, but east – west, towards the old town, so to be sitting there one can monitor both the new and the old, and thus the shape of the tower becomes a symbolic instrument of bridge between old and new.

Spatially Tower reads like a series of mini – hung buildings within the superstructure, with “mega – spaces” between them. In between these mega – spaces are the floating gardens each with a variable, transparent, light and open atmosphere at the base, and more closed and shaded in the waist of the tower.

Between the level of 170 and 350 outdoor stairs will lead to the public all the way through the narrow waist of the building. Here visitors can investigate the structure offered by while a physical experience of tower size.

Open net structure that twists on its axis, creating a fit at the waist, in the middle of the building, this shift has created a slim profile was used. The design of the lattice network is not only by structural considerations also meets aesthetics, architectural and environmental considerations. 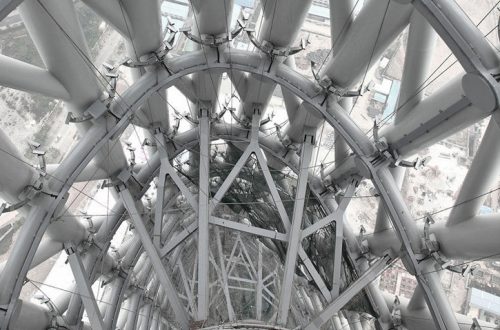 The ability to generate nodes was important in the design of the Guangzhou TV tower 610 meters high and capacity to receive visitors challenge. Although none of the 1100 steel nodes are identical, the design team succeeded in creating a single, simple node type.

The rings are placed on the inner end of the columns so as to lose one another and are spatially connected off center. This will make the view inside is dominated by rings, while the view from the outside is dominated by the sloping columns. All rings are placed at an angle of 15 degrees, so that both an opening for entry into the base of the tower and a pitched roof on top of the building, with magnificent views over the city is created. In the distances between rings a gradient which is more dense towards the center of the tower in order to produce a more intimate enclosed space within the structure, while simultaneously the steel which is more efficient is placed down.

Columns and diagonals rings together form a network which varies along the section of the tower. The columns are perfectly straight, although it will tilt in one direction, giving the dynamic turning tower.

The columns taper from bottom to top, between the columns and setting the network node becoming a rigid network. The rings are placed inside and its diameter is set at 800 mm, they are truly round, following the curvature of the face which runs along the inside.
In the bottom of the tower columns are 2 m in diameter, constructed of a steel plate of 50 mm. At the top of the tower diameter of the column is reduced to 1100 mm with a thickness of 30 mm plate.

The core of the TV tower is a reinforced concrete elliptical shaft with a short diameter of 15.6m and a 18.6 m long one, built with the help of a sliding formwork.

In 2005 excavation began, in 2006 the construction of the steel structure began. 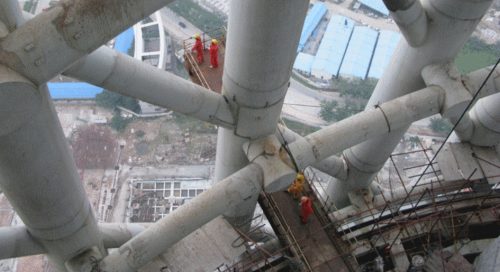 The nodes and tubes of steel net, which give the tower its distinctive profile, were prefabricated in Shanghai and taken by truck to the construction site. The elements are connected with bolts first, and only after all have their place tubes have been welded together, first marriages were burned.
Subsequently first six rings and columns with all matching the corresponding tubes are mounted. The columns are aligned and filled with concrete to acquire stability and fire protection.

At the beginning of the construction work was done 5 cranes, but from the 100m high 3 that were placed outside the structure were he removed and continued only 2 until the core and the steel structure was completed.

The core was finished in August 2008 and the final steel ring was placed in late November of the same year. Next, the main structure made ​​up to the upper cover 450 m.

The antenna is raised another 150m, which acquires a tower height of 612 meters. The antenna is manufactured in two parts. Thinner upper 80m mast are constructed within the wider and lower part. In May 2009, the top was lifted into position, and the mast was completed.

The entire tower was completed in 2010 and put into operation for the Asian Games that year.