The Casa de Té Boa Nova is one of the first projects built by Alvaro Siza. It rises from the rocks along the Atlantic Ocean as a natural extension of the landscape.

In 1956 the City Council held a contest that was won by the Portuguese architect Fernando Távora. Once chosen the location on the cliffs, Távora delivered the project to his collaborator, the young architect Álvaro Siza to whom the final version belongs, becoming one of his first projects built and marking the beginning of his career. With this work Siza emphasizes the way initiated by Távora, to combine figures and materials of the traditional Portuguese architecture adapting them to the contemporary necessities. Set in a challenging topography, the building stands as a symbol of the identification of architectures with an active interpretation of the landscape. The composition of its low volumetric expressiveness and the surrounding rocks call for respectful attention, which has deteriorated over the years.

In this early project of Boa Nova all the signs of what was to be Siza’s distinctive way of approaching reality are presented, the whitewashed walls give life to the geological structure of the rocks, the foundations form the concrete base, the Walls come out from the rocks and the roof hugs the whole building, as to protect it or hold it firmly to the rock. All this is combined to show the architect’s sophisticated ability to impose modernity on nature or integrate it into the history of the place, with the least imperious gestures possible. “… Architects do not invent anything, they transform reality …” According to Álvaro Siza, this is his “guiding principle”.

It is said that in the 90s a strong storm caused the waves to reach the building, affecting both wings and dragging all the furniture, having to replace and restore many original pieces. 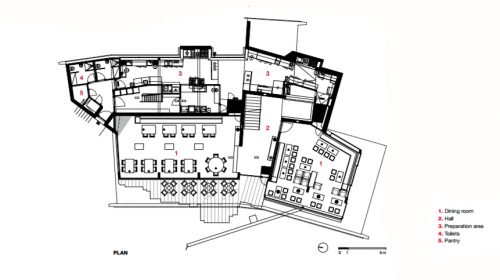 In 2013, 50 years after its inauguration, Álvaro Siza himself has transformed the space into a restaurant for Portuguese chef Rui Paula. Both spaces have been completely restored, retaining all of their original architectural features, from the comb-shaped wooden roof profile to the concrete pillars between each of the windows. Siza opted not to change almost anything from the original design, restoring all doors and windows and leaving the wood visible, made replicas of the furniture, replaced the original roof tiles, which are no longer in production, with a similar model and designed new Projected copper gutters that were not present in the initial structure. He also updated the technical parts and the lining of the kitchens, along with some mechanical elements that have been equipped with electric motors, the windows that go from the floor to the ceiling retract in the ground allowing the dining room to open completely to the outside.

In 2014 the Boa Nova Restaurant reopened its doors, now without the tea house, whose space is occupied by an additional dining room.

The house sits on the rocks, approximately 300m from the road and under the promenade Av. Da Liberdade in Leça da Palmeira, not far from Matosinhos city where Alvaro Siza grew, Oporto,  Portugal.

In this location, between the lighthouse and a Franciscan church of 1369, nature descends towards the sea, joining the surrounding meadows to the nearby beach and the cogged geometry of the rocks, creating a particularly evocative place, which the young Siza at the time He found it a bit daunting. As he recalls: “The project was the result of a focus between the natural balance of the area that stretches between a small church and a lighthouse at a later time. Therefore the building is not tall because of its nature and to avoid To collide with the proportions of the church.The purpose of the project was not to compete with that presence, and at the same time to prevent the lack of construction of character, reconciling the autonomy of the new building with the existing context.

“… Architects do not invent anything, they transform reality! …”(Álvaro Siza)

In the 60’s in Portugal it was still possible to make architecture working in close contact with the place, its conditions and surroundings, and this project, like the Pool des Marés in Leça da Palmeira in 1966, tries to “build the landscape “Of this marginal zone in the Atlantic, is based on this concept, through a thorough analysis of the climate and tides, existing plant life and rock formations, all in relation to the avenue on which it is located and the City that unfolds behind.

Siza uses the relation with the landscape to bring to light the “conflicts” that the architectural operation produces objectively in the action of superimposing the geometric rigor that is an integral part of any work of architecture on the topography and the natural forms of the site, … I am not in favor of being astonished by the context, the same idea horrifies me .. “, commented some time later. From the rocks of Leça da Palmeira and from any place where it operates, Siza takes advantage of the opportunities, the hidden possibilities, the work of the time, that become the subjects of the project. Thus, for the House of Tea Boa Nova captures the meaning of the rocky profile, rectifying it towards the sea with a precise line, that of the top of the roof of a single tone in red tiles of Roman style.

The lines and angles of the structure, as well as the massive use of red tile on the deck are characteristic of the constructions of the time. From the road is an architectural walk created with a system of platforms and stairs that is born in a nearby parking and leads to the entrance to the house. The sinuous route that in some sections shows the sea is flanked by the stones of the place on one side and walls of concrete painted white on the other. Access to the house is protected by the same roof that hugs the concrete building, keeping it cool in summer and protected from waves and storms in winter. 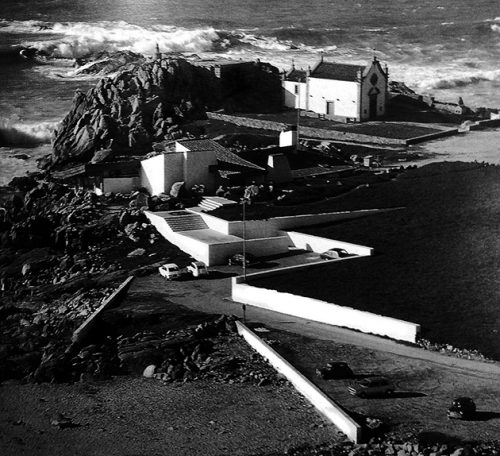 In the interior the spaces distributed in several levels have 2 key wings, the dining room oriented to the west and the living room of the south zone. The two main spaces, whose plants form a butterfly, open gently to the sea, following with their exterior walls the natural topography of the place.

The dining room and tea room are situated just above the rocks, and are joined by an atrium and a double height staircase, with the entrance on a higher level. The kitchen, warehouse and employee areas are half-sunken at the rear of the building, marked only by a narrow window and a mast chimney lined with colorful tiles. This location of the auxiliary spaces responds to the idea of ​​the architect to hide everything that was unnecessary for the view. The tea room has large windows on an exposed concrete base, while the dining room is fully glazed, opening onto an open-air plateau. In both rooms, the window frames can slide on recessed guides towards the long projected eaves, continuation of the ceiling. This creates an amazing effect in the summer, when it is possible to leave the dining room directly to the sea, as the building seems to disappear.

On the foundations that create a concrete base, the walls, also of exposed concrete, are raised, which become an exterior façade and serve as support for the cantilevered ceiling, marked with a thick wood in the upper band. The extension of the roof serves as protection for the continuous succession of openings of different sizes. In the interior, the wood plays a connective role with certain elements of facade as the windows and the roof coating inclined in tables of red Afzelia that continues outside and marks the light of the skylights with a game of descending battlements. 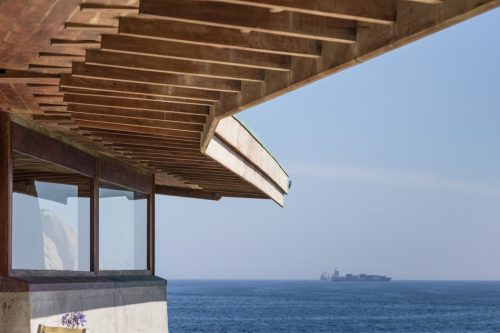 As in many of his early works, Siza plays with various materials for the construction of the tea house, masonry walls covered with white plaster, exposed concrete pillars on the facade facing west and an abundant use of African wood ‘ Afizelia ‘in the lining of walls, ceilings, frames and furniture. The same material, in an elaborate set of interlocks and connections, is used for the floors, the staircase and the panels of half height. The upholstered leather chairs and service trolleys also made with Afizelia red wood were made from the design And original materials by Siza Vieira.

On the outside the lining of the projected eaves is made with long woods varnished with copper flashes. The roof is a concrete slab covered by red terracotta Roman tiles and a suspended wooden ceiling.