The Benaroya Hall is the headquarters of the Seattle Symphony Orchestra.

It is funded from public and private funds, The Seattle City Council donated the land valued at $ 10.5 million and the site was built with private funds. The facilities were inaugurated in September 1998 at a cost of $ 120 million.

The new headquarters of the symphony orchestra occupies an entire block of downtown Seattle and has helped to double the budget of the institution allowing attract artists of international stature.

The name comes in honor of Jack Benaroya, a distinguished philanthropist who contributed the largest donation that the institution has ever received, $ 15.8 million.

The building occupies an entire city block of the urban fabric of Seattle, specifically the lot that is framed between the third and Second Avenue from east to west and University Street and Union Street in a northerly direction Sud

For the subsoil of this solar underground pass a path of movement of buses and light rail line.

Four lights are placed at the four corners of the land by regulating the traffic.

Finally the sun is just below the path taken by all test aircraft that take off and land from the nearby Boeing Factory in Everette.

In short the site has all the adverse factors that might exist for the construction of a music venue. This factor identified many of the design decisions and overall structure of this project.

Situated amid a hostile environment for the activities it carried out the building is presented as a contended the container followed within each other and isolated from its surroundings and context.

Once the user enters the interior completely lost track of time and space, with all their senses free from any obligation rather than enjoyment of the show.

All decisions made during the building design are aimed at improving the efficiency of acoustic spaces, making the experience a user that goes beyond the simple attending a concert or recital.

The building is defined, both spatially and structurally, as a container inside another container.

The hall for symphonic music representation is the star of the set piece and are placed around a series of ancillary spaces without actually being in direct contact with it still further isolate the environment while hosting other activities service in the main hall.

In the south-west corner of the site lies a garden in memory of American soldiers killed during various wars.

The cost of the garden was 2.5 million dollars because they chose to plant mature trees instead of planting young trees and wait for them to grow.

The garden has a total of 44 adult trees and 2000 plants smaller. 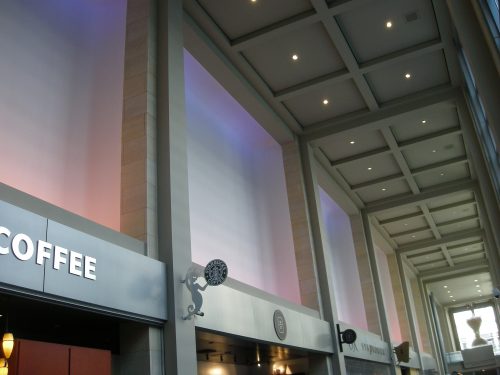 Along the facade that extends over the Third Avenue from one end to the site develops a covered gallery that was initially conceived as an outdoor covered area but later had to be glazed to prevent space from becoming a dangerous and careless during the night hours.

This is a semi space given to urban public space that has a height of two stories along its entire length and which are located a number of services such as cafes and restaurants.

The construction was partially financed by the government, which means that under the laws of Washington State 1% of the money from public funds should be designed to give pieces of art in public spaces. The gallery space was chosen to carry out that operation.

On the counters of the various businesses that are in the gallery are arranged a series of squares of white, recessed to a depth of about half a meter and with rounded edges to avoid creating any kind of edge. These squares are framed by the structural pillars with stone tiling and from the bottom of a light projected changes tone as it progresses in height simulating the effects of sunlight by getting on the sea.

Facing University Street is the lobby which gives access to the main room.

This is a spectacular five-stage space that becomes a great place to meet and talk to both the moments before the start of the representation as to the breaks in between.

The lobby is framed in a semicircular with all its glass facades and a gateway to the height of the first floor that goes all around its perimeter in turn giving access to the boxes at the top level. 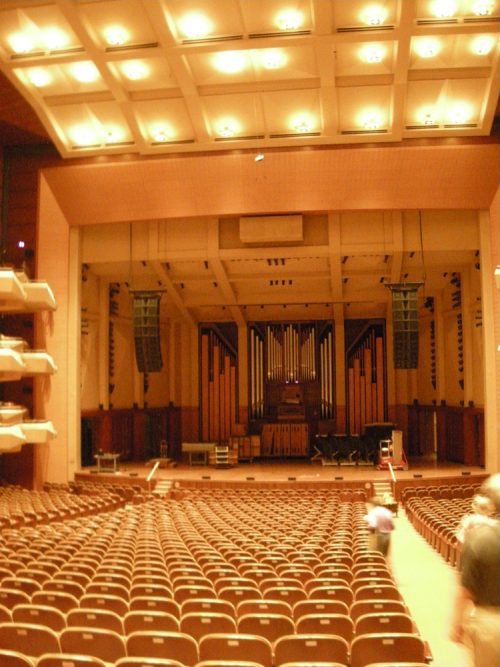 The S. Mark Taper Foundation Auditorium is presented as the crown jewel in the whole. This is a room with a capacity for 2,500 people in addition to more than 150 that may come to occupy the stage. Was designed especially for the representation of symphonic music. It does not represent or opera, or ballet, or theater.

The floor has a slight tilt toward the stage allowing a better view of it from all points. There is also an area of boxes located at the height of the first floor and along the entire perimeter of the room. All the boxes rotate a certain angle to approach the stage and have no more than three or four rows deep to prevent unwanted sound effects.

For the same purpose is molded all the walls and ceiling, creating triangular shapes which help distribute the sound evenly around the room and avoid reverberations.

The walls of the room are lined in wood. Thanks to laser cutting the wood tiling has the thickness of a credit card and proceeds entirely from a single fallen tree from natural causes in South Africa. The fact that all the material comes from the same tree helps ensure a certain consistency in the behavior of the same. The wood chosen is not absorbent, but on the contrary, it repels the sound returning to the room with a latency of 1.8 seconds, considered ideal for symphonic music representation.

The 2,500 people who can hold the room are an important element of sound absorption. Taking into account this factor and to avoid excessive absorption both the ground and the back of the wooden seats were held view. Only the halls were covered with carpet for security reasons. 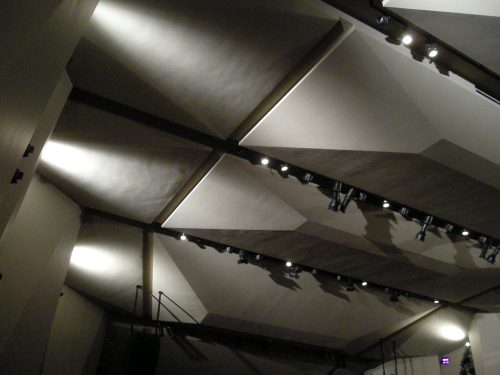 Roof of the Nordstrom Recital Hall

The Nordstrom Recital Hall comes as a secondary room with capacity for 540 spectators.

In this room are kept general forms of the main room, the floor is slightly tilted towards the stage and both the walls and the roof taken triangular shapes to enhance acoustics. These could not be covered with wood this time by budget constraints.

Because it can hold 540 people, the Nordstrom Recital Hall are not a factor as important as absorption of the 2,500 S. Mark Taper Foundation Auditorium here the whole floor was covered with carpeting and the seats are lined with fabric over its entire surface.

No building is too high and the lights to cover are, if not more, the normals at any cinema or function room, so the structure should not be in principle complex or a section of particular interest in this work. However, the need to isolate the interior spaces of an extremely hostile environment forced the architects to take extreme measures.

First spread a layer of more than two feet thick of reinforced concrete on the ground to prevent vibrations from underground routes. This decision made the whole lose a whole floor of parking spaces, but it was a forced decision if they wanted to successfully isolate the building.

Once inside the building The S. Mark Taper Foundation Auditorium is literally an independent structure, separate from the structure that surrounds an empty space of about half a meter.

This inner box is the S. Mark Taper Foundation Auditorium relies on hundreds of pieces of wetsuits that are based in turn on a mattress composed of several layers of steel and neoprene.