Built just east of Broadway St, about 65 Bleecker St. Bayard-Condict Building, it is the only work of the architect of Chicago, Louis Sullivan to New York and its first job alone. Its meaning is not at its height, but its elegant facade, which substantially increased the area of ​​windows in proportion to their solid wall, heralding the advent of the glass curtain skyscrapers today. So advanced was the Bayard-Condict building six months before it was completed, the Architectural Record proclaimed it “the most accurate approach to solve the problems of skyscrapers in the city of New York.” The building is an icon functioning of the city and a listed historic monument.

The building designed by Sullivan with the assistance of New York architect Lyndon P. Smith, was built between 1897-1899 for the United Loan and Investment Company. His terracotta curtain wall was the first of its kind in the city and its design will be featured on the advice of George Elmslie, a young architect who worked with Sullivan for a few years. Terracotta pieces were manufactured by the Company Perth Amboy.

Construction began in December 1897, even before all the problems were resolved with the Department of Construction. These setbacks could not be supported by the original owners to reclaim the bank to cover the mortgage. The property was taken over by Emmeline and Silas Condict and construction was completed in December 1899, changing the name to Condict instead of Bayard.

In 2000 the architectural and engineering firms WASA / Studio A, located in the city of New York, supervised a careful restoration of the exterior of Bayard-Condict Building.
Of the 7,000 units of architectural tiles, glazed terracotta, 1,300 were found to be cracked that needed to be renewed, but only 30 of them were damaged beyond repair and needed to replicate. The rest was covered with epoxy resin and once restored, the original parts, were replaced. At some point in the history of the building, the original facades were replaced by commercial aluminum windows. This “renewal” removes the bells and whistles of the capitals of the original columns, only one survived in the basement of the Brooklyn Museum. When the windows were restored by WASA / Studio A replica based on the original survivor and put back in place they were made. In 2003, the Greenwich Village Society for Historic Preservation recognized excellence in Village Restoration Award.

The Bayard-Condict building is located at 65 Bleecker Street, between Broadway and Lafayette Street, at the beginning of Crosby Street in the NoHo neighborhood of Manhattan, New York, United States. It is the only work of architect Louis Sullivan in the city of New York.

The land on which is located the building was sold by the Bank for Savings (Savings Bank) to the United Loan and Investment Company in August 1897. The aim of the Company was to bring down the old bank building and replace it with a building twelve-story commercial building be named Bayard. The announcement of the sale of property in the New York Tribune stated that the new building would be designed by Louis Sullivan.

In the late nineteenth century, the world center of modern architecture was not New York, was Chicago, with famous visionaries like John Wellborn Root or Louis Sullivan. They argued against the use of historical elements, rejecting the fact that a modern structure to be hidden behind a screen of another era, this concept was later followed by Le Corbusier, Mies van der Rohe, the architects of the Bauhaus and finally by proponents of international style. 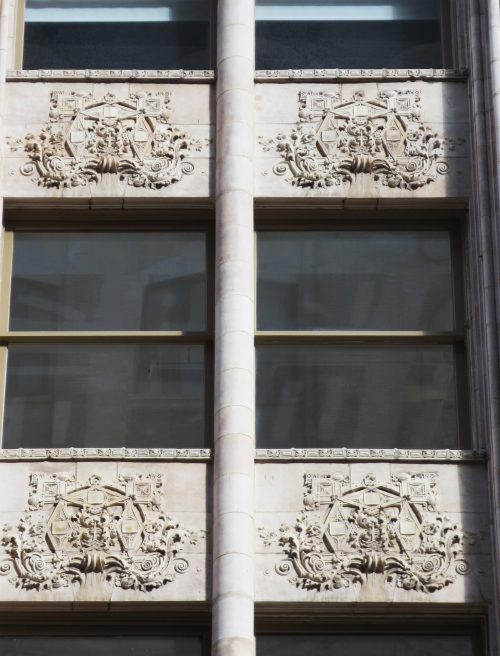 Sullivan said that new types of buildings require new forms of architectural expression. Such as the Monadnock buildings, Reliance, the Chicago Mercantile Exchange or the Carson Pirie Scott (Sullivan, 1894 and 1901), with its functional facades composed primarily of vertical pillars, large windows and ribbons geometric ornamentation or Art Nouveau gave impetus to new contemporary buildings of New York, pushing through existing older. Louis Sullivan built a single work in New York, hidden among the buildings in an area with diverse business interests.

The facade perfectly balanced with its elaborate and different pillars, the largest topped by angels, the smaller opening in a double bow, exactly translate the simplicity of its structure and is a sign of exquisite ornamentation also designed by the architect.
The idea of ​​designing buildings with a new style of ornament was very different from what is usually done in the New York of those years. It was neither better nor worse, just a thought different aesthetic to which should be considered a skyscraper. Today the work of Sullivan has category by itself and is considered of great beauty, but the idea of ​​using a new type of ornament was just a different idea of ​​how they could design a skyscraper in the late nineteenth century. 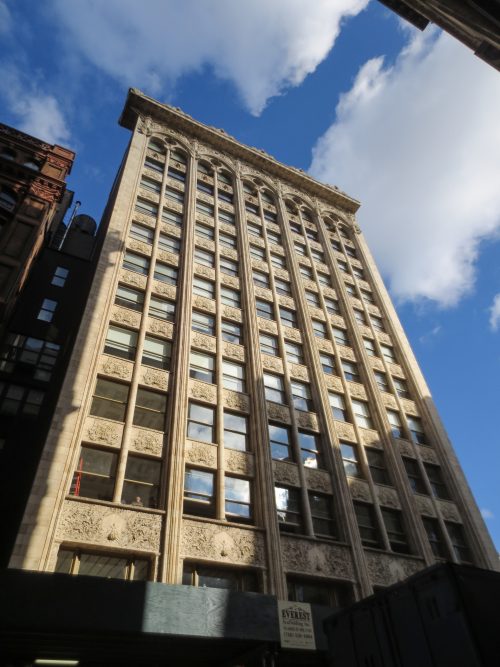 The slender uninterrupted springs and molded vertical continuity defined the five narrow bays that rise to the full height of the building from the foundation that develops to the second floor and ends in the arches that crown the building, just below the ornate frieze which is marked outwardly projecting cornice ceiling.
These springs, with its columns express the inner structure. Every two bay windows is divided by a narrow mullion ending in double arches enclosed within the arc formed by the docks.

The division of the building is in three sections: a decorated base, an axis of identical stacked tiers, and crown decorated illustrates Sullivan vision in designing skyscrapers, transforming into a creative expression of the classical division height of a column, base, shaft and capital.

With 13 floors and 49 meters high, the building does not try to disguise his height, but accentuated by the relatively undecorated pillars and pilasters. Distinctive floral motifs characteristic signature of the architect, decorate the base and the top of the facade and the spandrels, below the window openings. Sculptures of figures of angels were added, on request, Silas Condict Alden, over the objections of Sullivan. 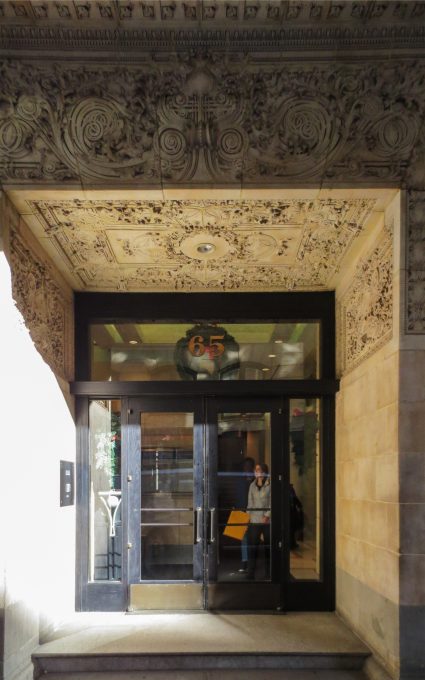 According to the precepts of Sullivan, the main entrance was to “draw the eye” of whom come closer and although its decor has been altered through the years, still retains much of the original design. The front door is flanked by two panels that support a projected cornice and window worked with organic shapes combined with geometric motifs crowned by a crest.

The transition between the ground floor and the upper floors are marked by ornamental panels within each bay to overcome the second floor. From the second level plants appear identical paired windows, indicating the similarity of the inner offices.
Each floor is separated by highly decorated spandrel panels embedded between the docks and the uprights highlighting the opening of windows.
Below the 12th floor plates forms acquire more plasticity, incorporating heads of lions in its decoration.

Finally the top floor clearly shows the completion of the office area. The horizontal sweep of the powerful cornice ends the elevation of the building. The spandrels below ledges are dominated by strange figures of angels ( “faeries”), with outstretched wings of butterflies.

The structural framework of the building is steel and iron coated tile and brick.

In typical Sullivan building vertically by pilasters stress is enhanced by continuous uprights ending in ornamental friezes beneath the extruded cornices. The horizontal parts of the facade are formed largely with terracotta decorations, especially at the top of the building. 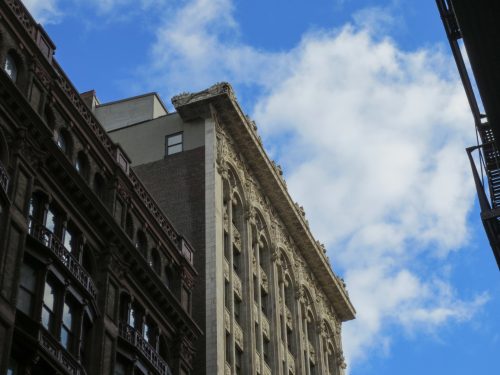 Bayard building was one of the first skyscrapers built with steel skeleton in the city of New York, to whose design the Building Department of the time raised numerous objections before the plans were finally accepted. It is one of the first examples of architecture school Chicago in the city.

This commercial office building with a structural frame of steel and iron, is clad in white terra cotta on a masonry wall.
The exterior walls were built with bricks of 50.8cm thick to the fifth floor to the ninth 40.64cm and 30.48cm to the terrace.

To achieve deep ornamental detail was painstakingly molded clay and hand carved.
Sullivan invented a new aesthetic ornamental for its skyscrapers, a kind of organic design that is often based on natural forms, some visible to the eye, other more sensitive. The densely interlocking shapes characterize the type of ornament used in its buildings in Chicago, Buffalo, San Luis, in the Midwest and elsewhere, and give a unique character to the building New York.