The House Arango has minimized construction to become pure architectural spectacle. This house has a panoramic ocean view and a moat around the building terrace not embrace the side where he was raised but springs it dramatically, which giant mushroom. In 1977 he was ranked by the magazine Record as “a party space, mixing room, the sea and the sky.” It was built in less than a year and would be the only project of Lautner in Mexico.

The house was commissioned in 1970 by Jeronimo Arango, “Mexican gentleman” as a weekend home for your family. Arango had seen publications Elrod House and wanted to make their new home with Lautner as Arthur Elrod as architect and interior designer. A requirement that the owner was asked that had great views over the bay of Acapulco, hence the choice of site. The house seems to float between sea and sky

Lautner responded with a concrete structure with two floors and 2,300 square meters of construction.

Arango’s family still owns the house that always offer a feast for the senses. In 1994, shortly before his death, Lautner received a new order for the family to design another residence in Southern California. That project never went beyond schematic design.

The house is located on the street Cda. Cardinal winds, on a steep hill bay Acapulco, in the southwest of Mexico, with wide beaches on the Pacific Ocean. It is also known by the name of Residencia Mar Brisas.

Like other modern architects as Richard Neutra whose work integrates architecture and the environment by extending the first within the landscape, in this house, Lautner acted on this principle, conceived the house as an extension of the topography and architectural forms used to frame the view of the outside, as did his master Frank Lloyd Wright.

Lautner invested with the same generous “feeling of freedom” both more modest houses, the roadside restaurants or luxury residences, which led to an increasingly radical sense of continuity between the built environment and the world of around and revolutionary fluency in developing and structuring of space.

A retaining wall along the road, a road leads by car to the slope of curls at the entrance leading, curls into and out of a roof which forms a huge arc that flows from the hill. The road ends in a large marquee, and the house is accessed via a monumental bronze door by German artist Mathias Goeritz.

Once inside the house appears surprisingly small, the shorter side of the curved roof is here at its lowest point, leaning towards the perimeter until almost out of sight, while the bridge leading into the interior of the house is higher than necessary, even approaching the visitor ceiling. Until it runs pretty inside, not appreciated the majesty of its dimensions.

This level develops the main part of the house, the huge open terrace, sheltered by a canopy, which in turn serves as a dining room.

The supports of the roof are the possible remains of walls and concrete overhang is projected onto the terrace in an envelope and clearly marked gesture that teaming up with the water channel block house lights down and give occupants the impression of walking through the air, the sky and the bay.

This channel 6 meters wide surrounds the deck and used as a swimming pool, with a continuous overflow around its perimeter. This gap not only highlights the dazzling expanse of ocean and nearby outdoor surrounding the house, it is also a clever way to keep the bugs and insects from entering the home while eliminating the handrail that would spoil the view.

The house, on the ground floor, has five bedrooms for the couple and their four children. Also the servants’ quarters are on this lower floor.

In the House Arango, [[: Category: Lautner, John | Lautner]] refined introduced innovations in the location, material and structure, which had been rectified in previous projects.
With its bold curves celebrates the sculptural qualities of concrete, he loved the experience. Lautner worked on this project and on numerous occasions with engineer TY Lin, pioneered prestressed concrete.

The bedrooms are simple stone, concrete and glass. The rocks continue its way to become the inner walls of the bedrooms

The large main room is located on a covered terrace and unpolished marble with few concrete furniture. 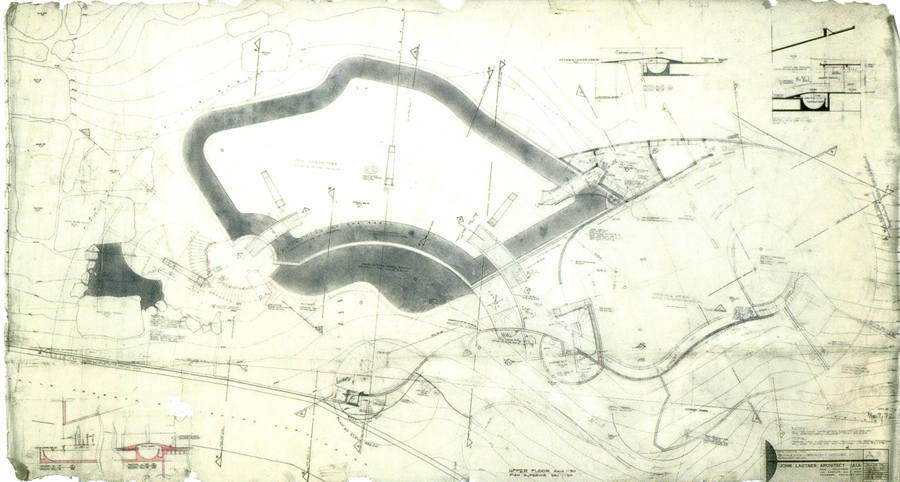 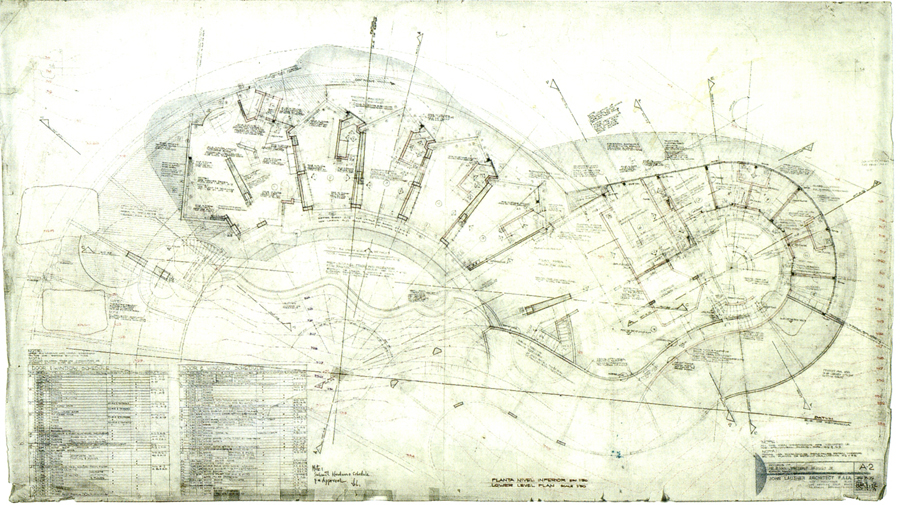 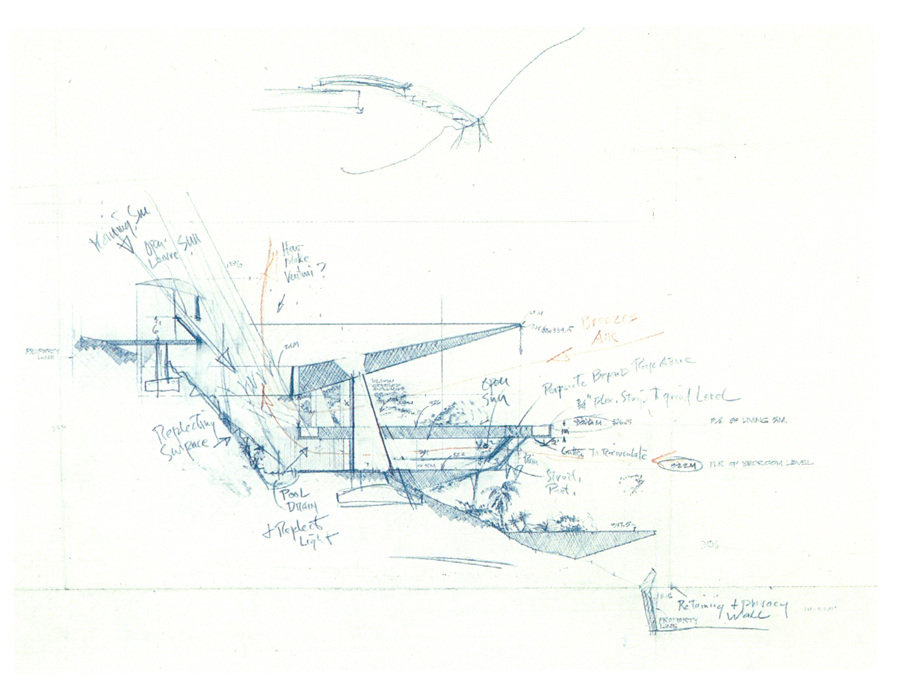 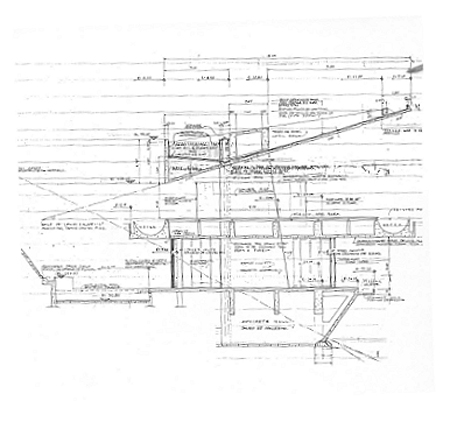 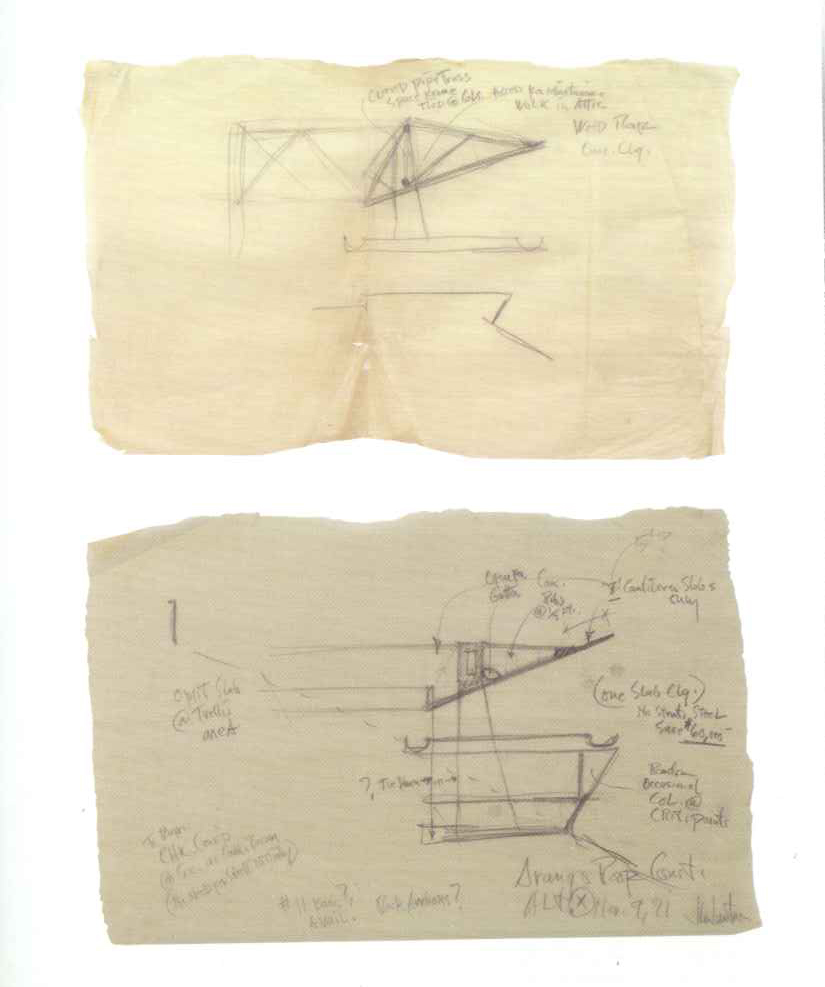 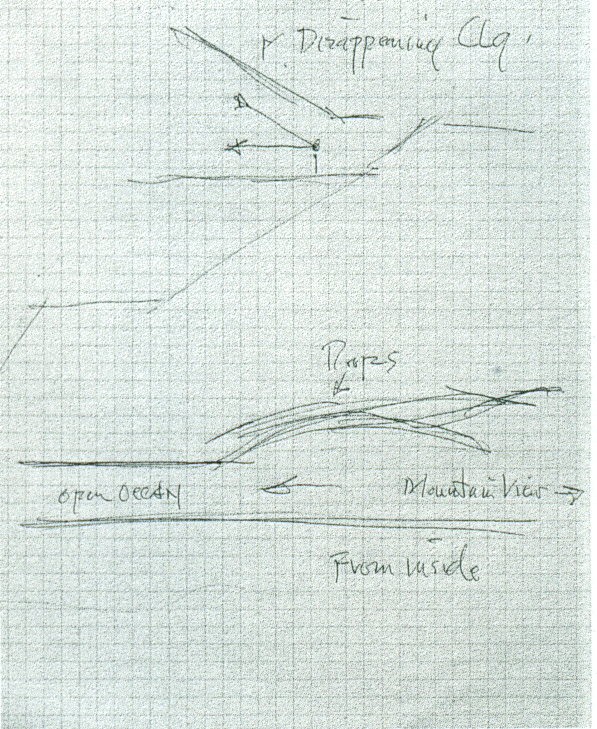 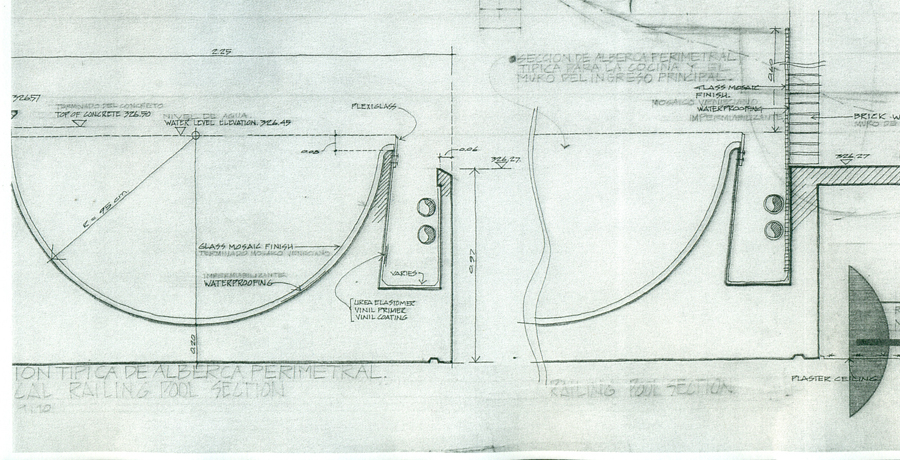 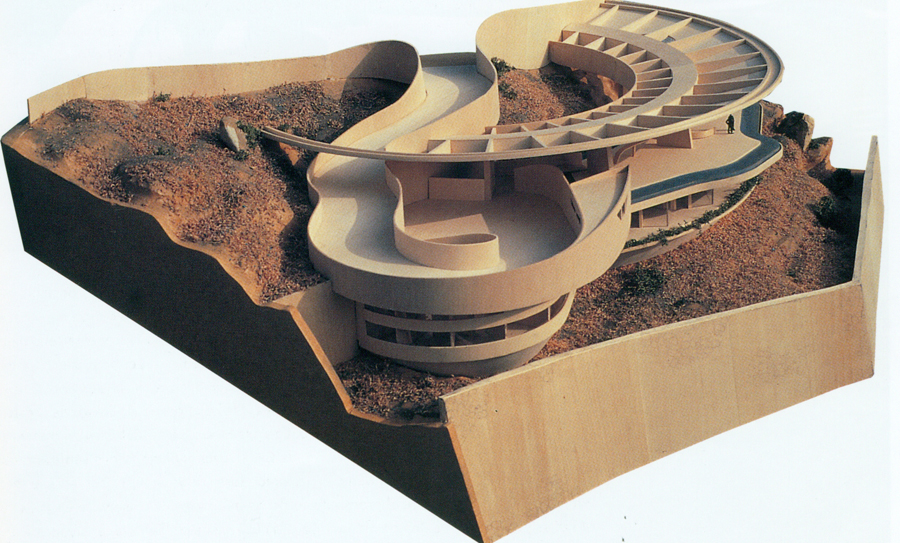 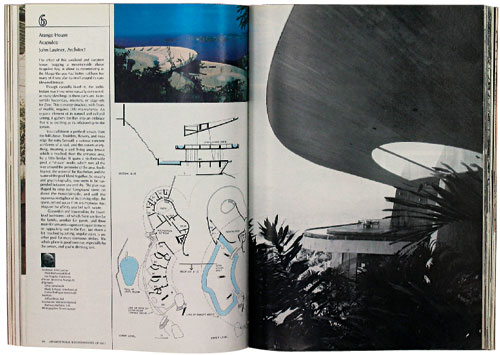 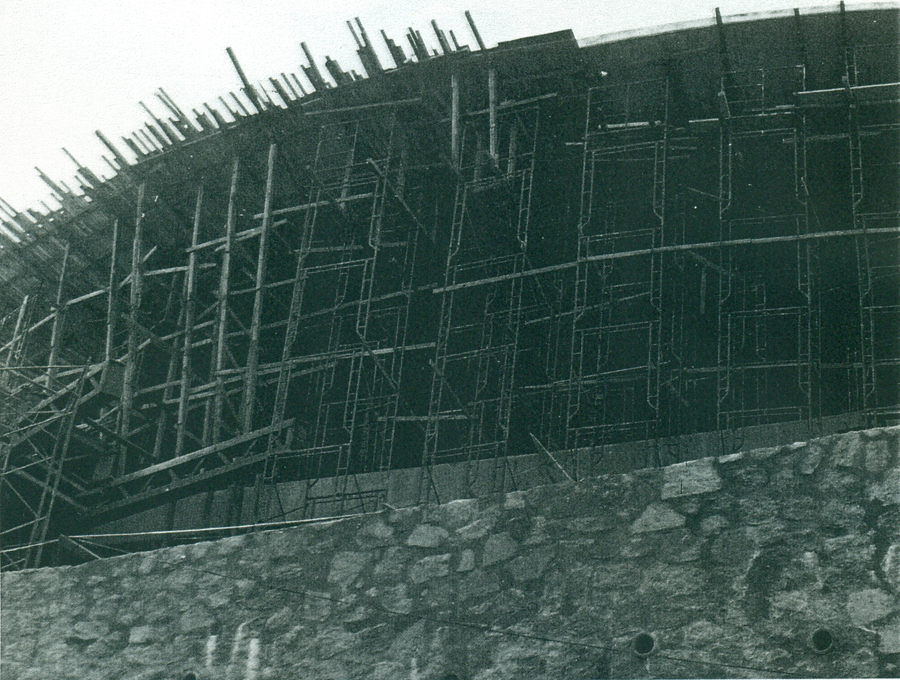 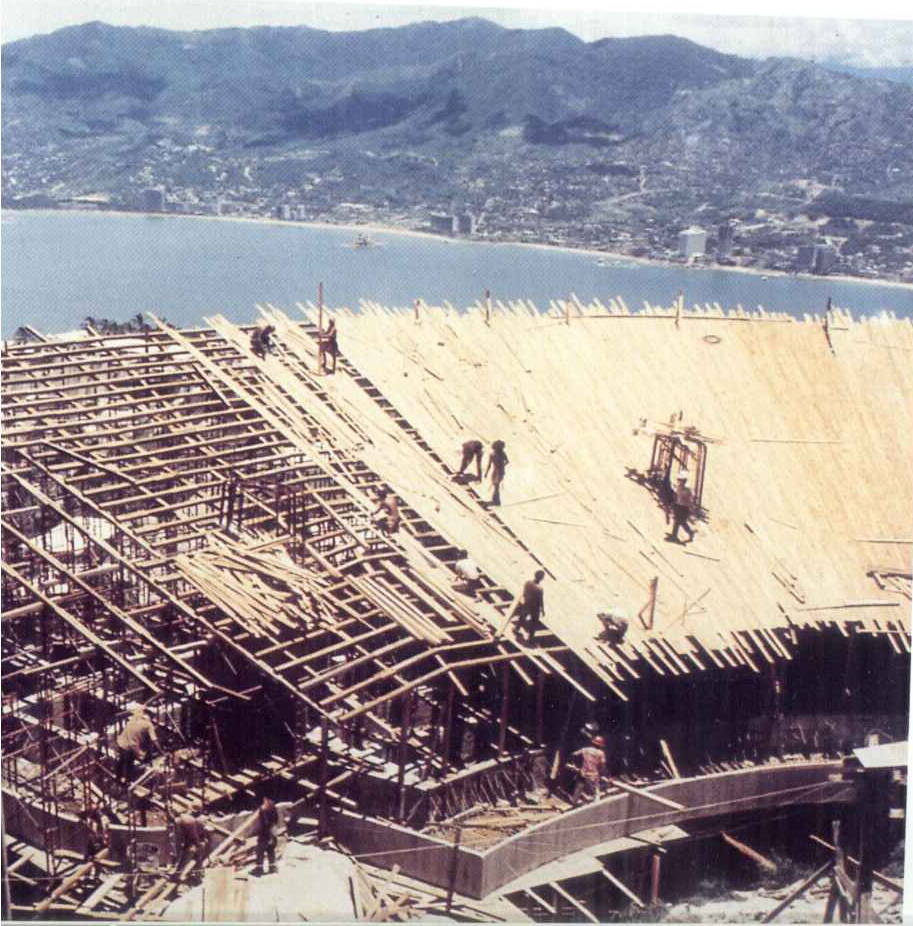 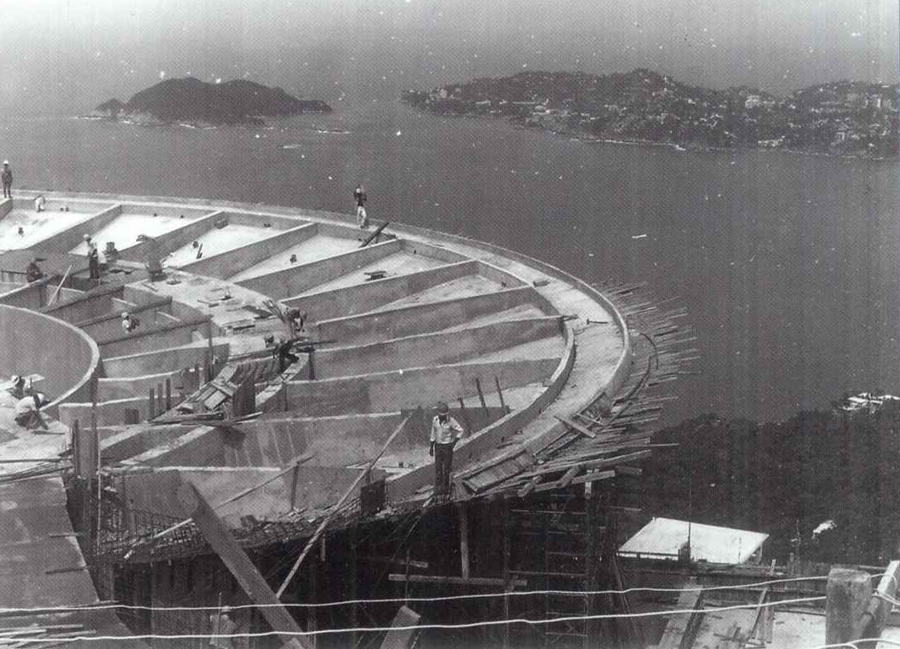 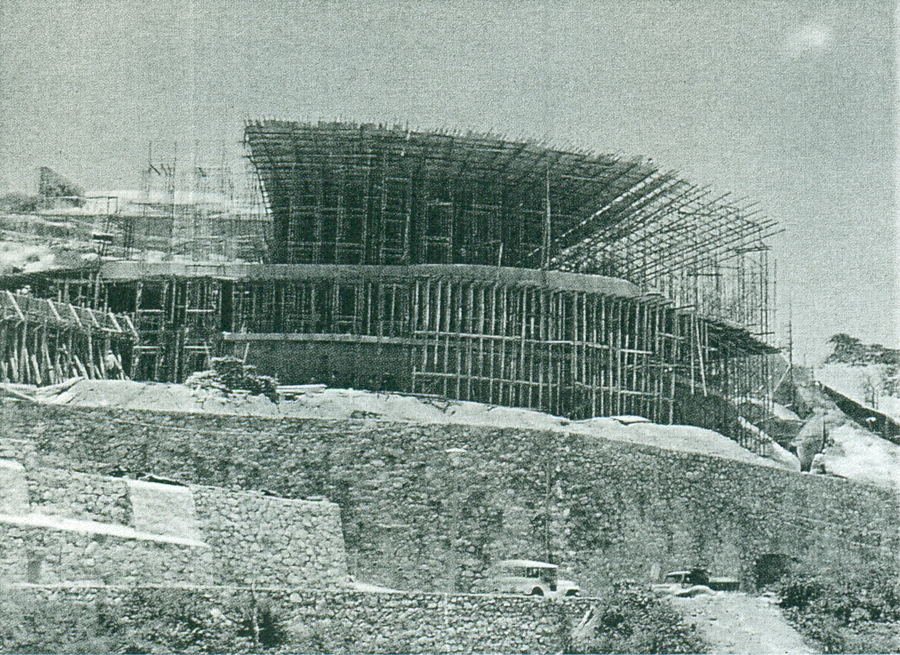 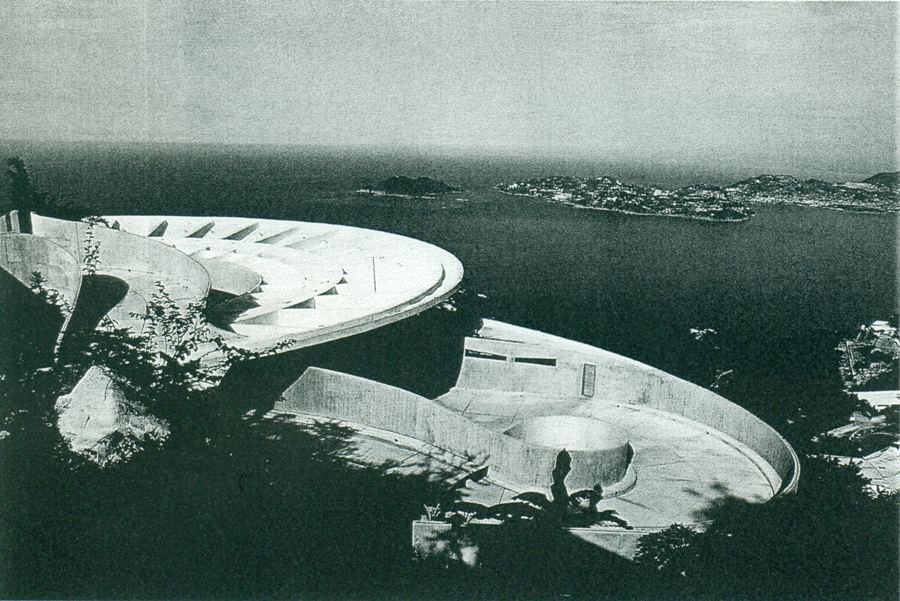 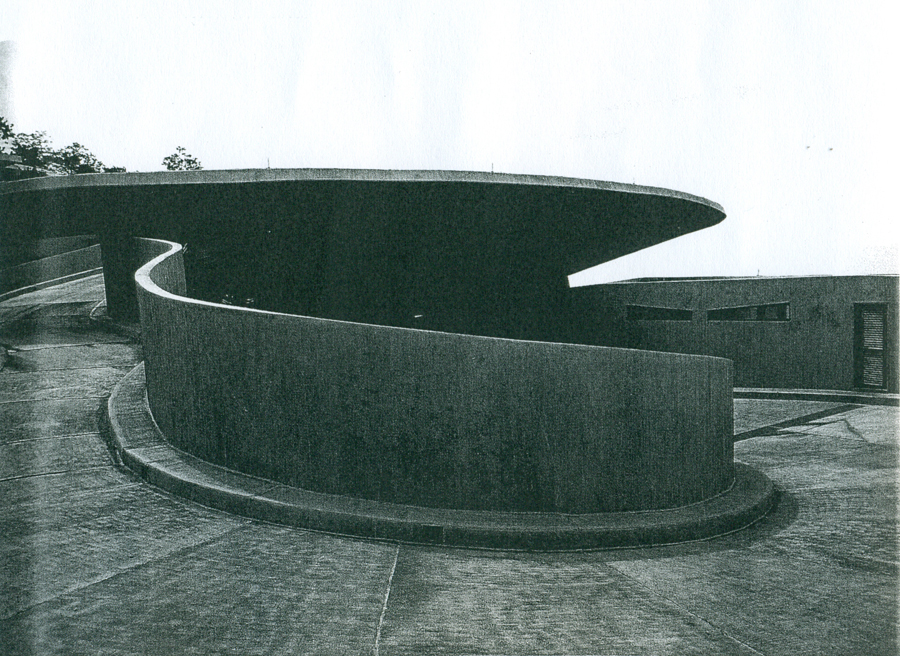 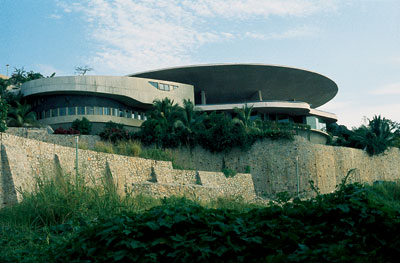 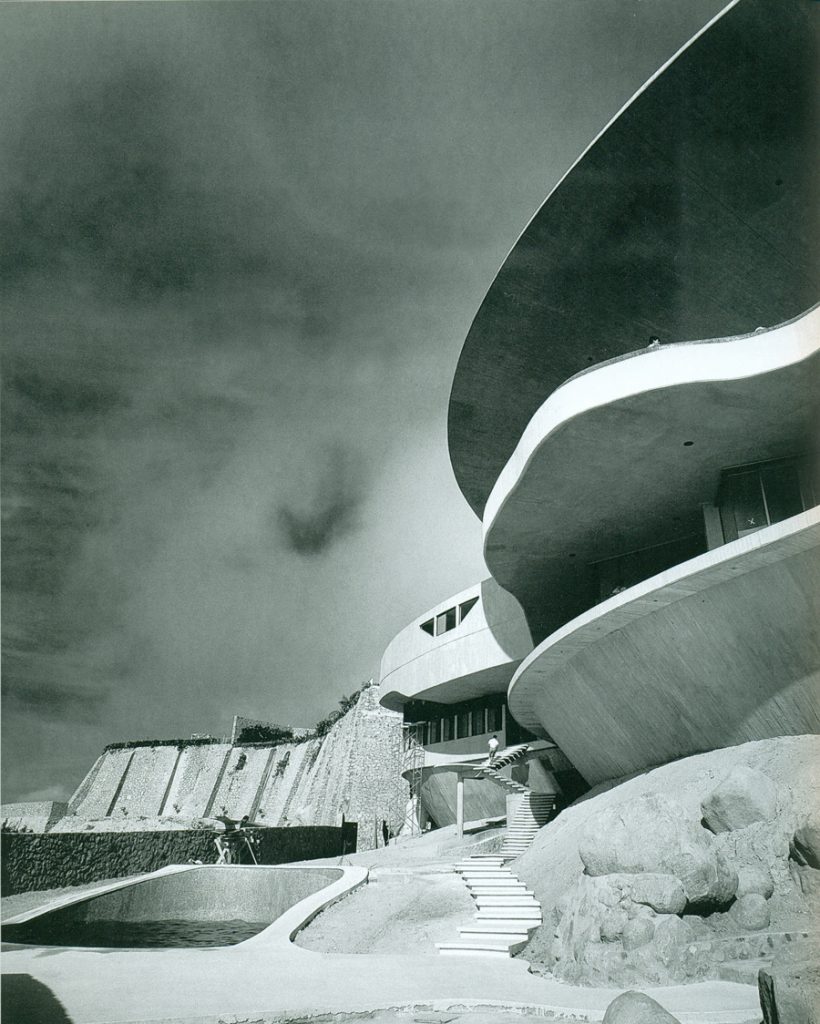 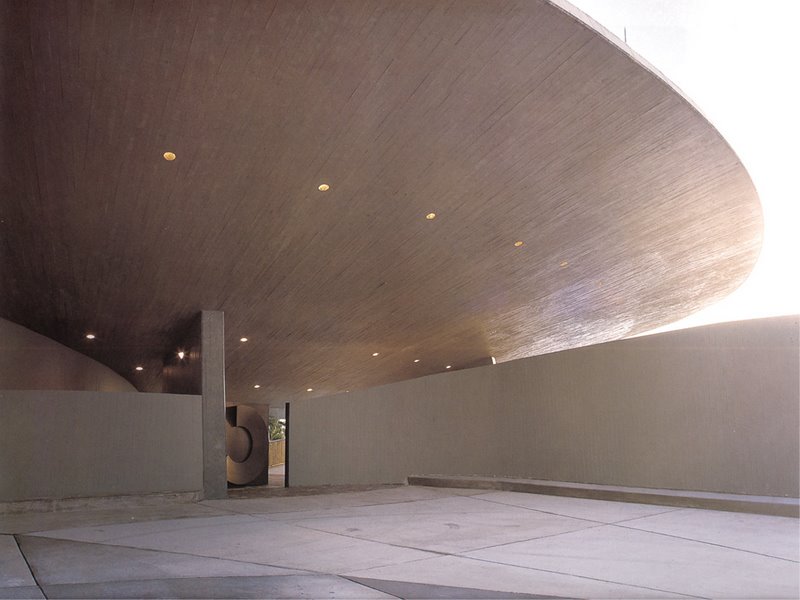 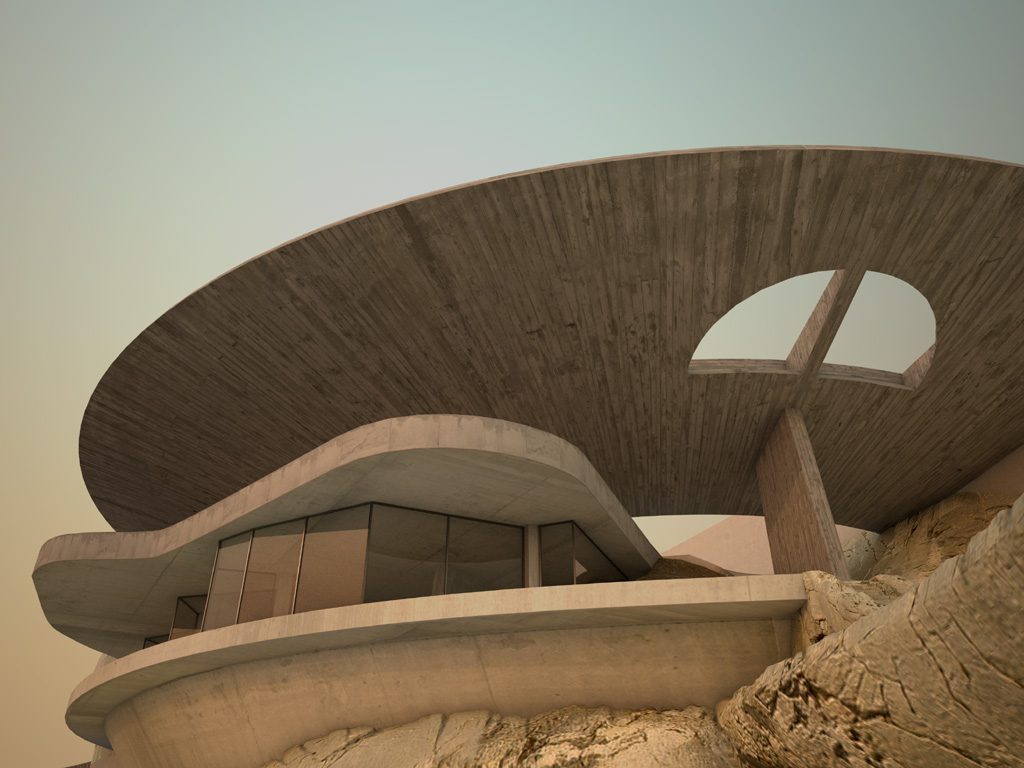 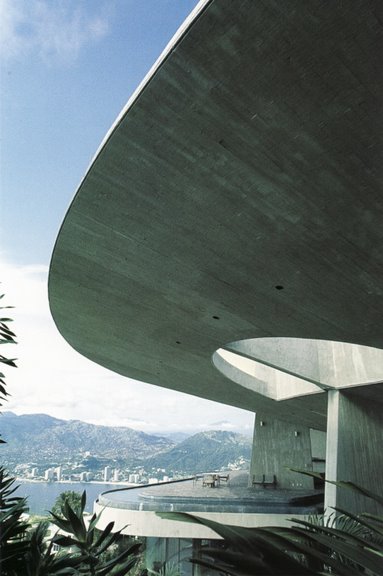 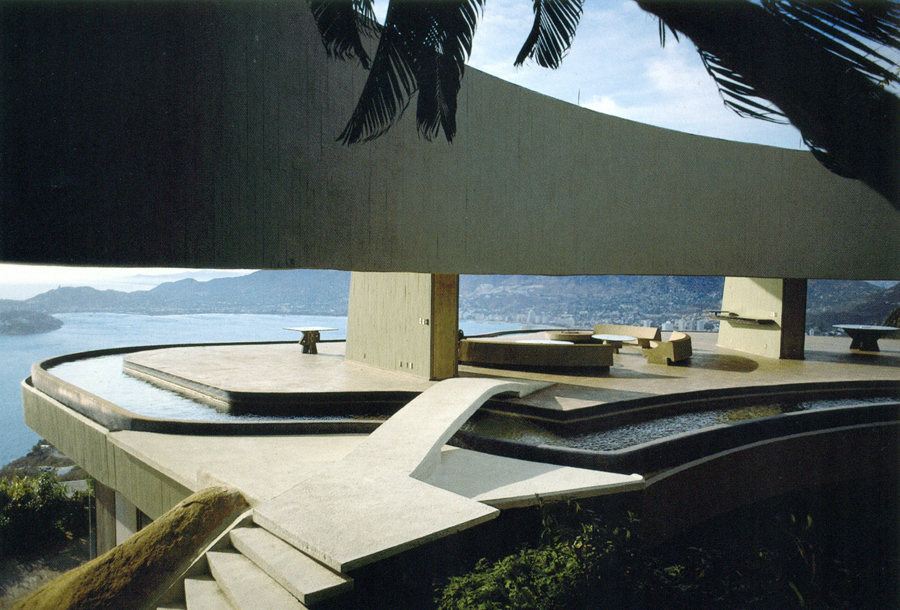 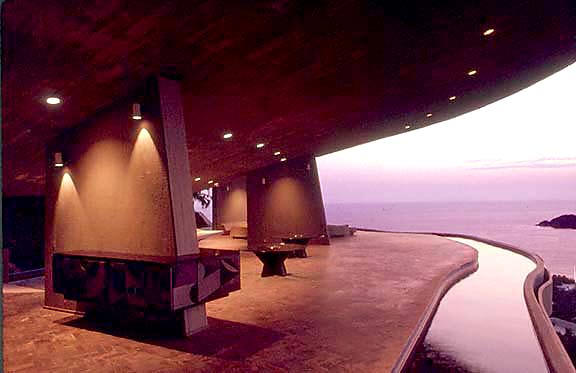 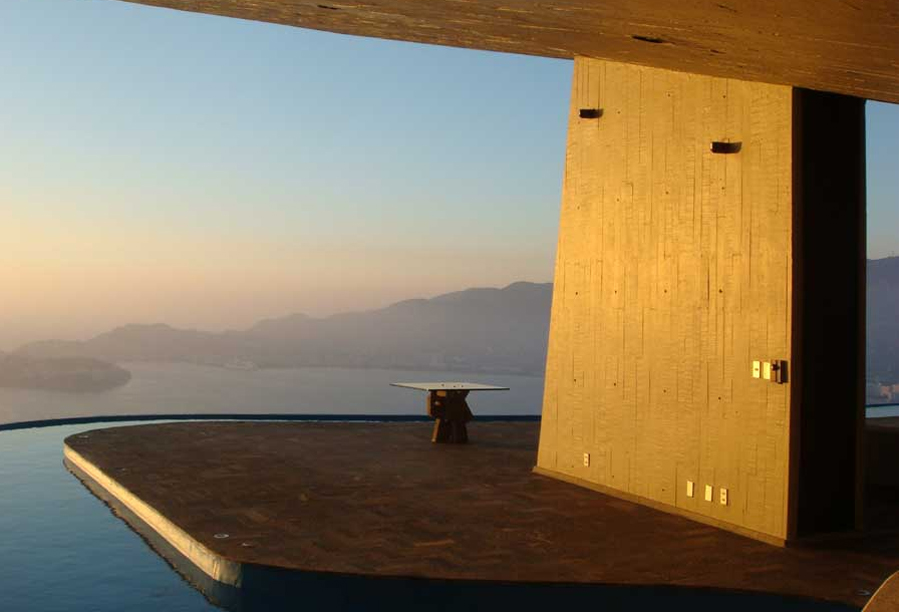 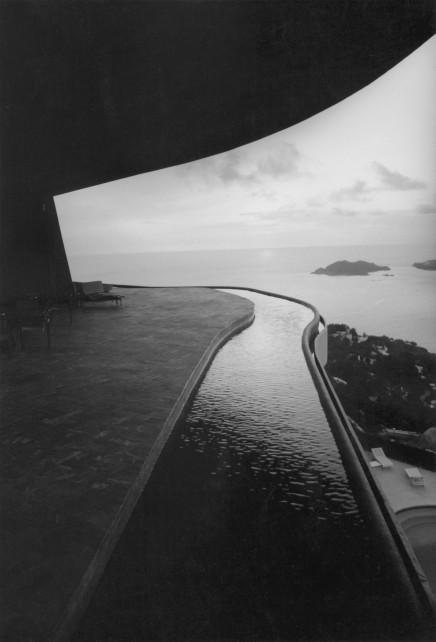 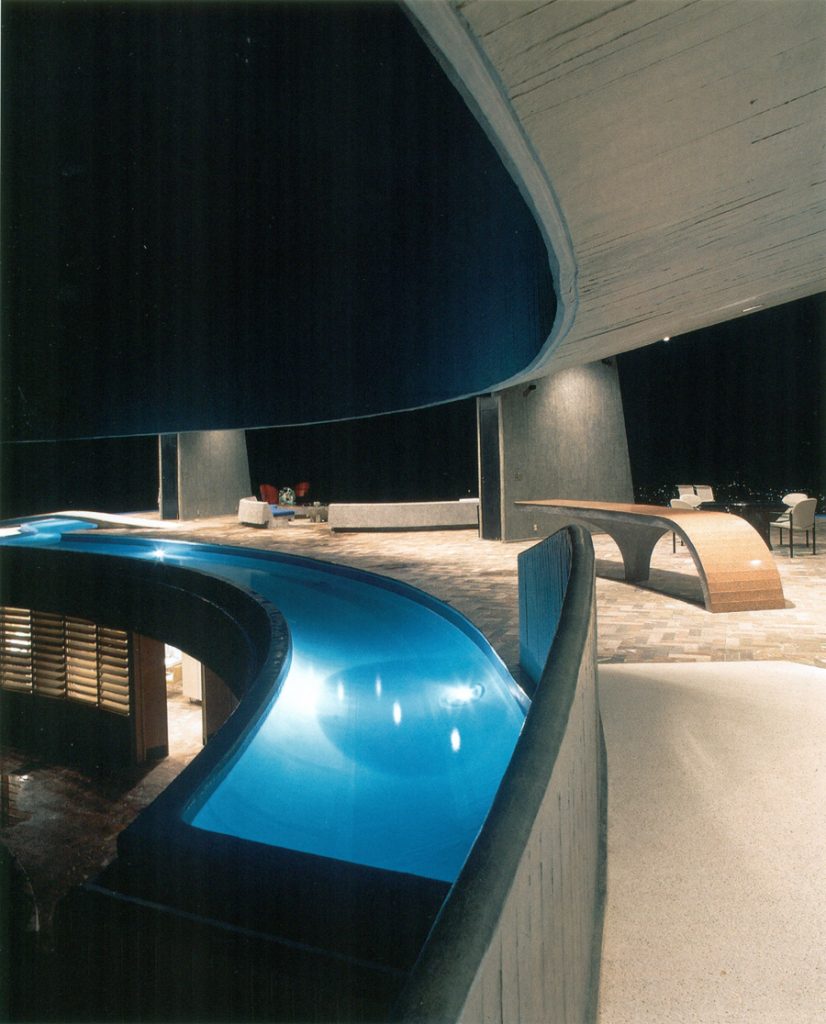 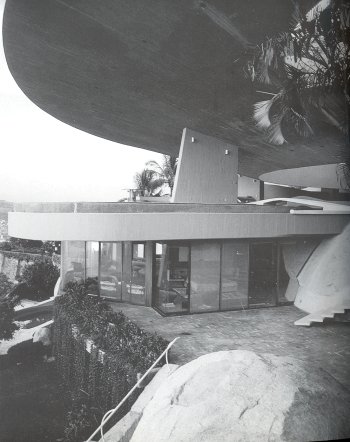 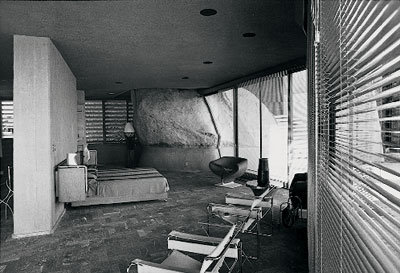 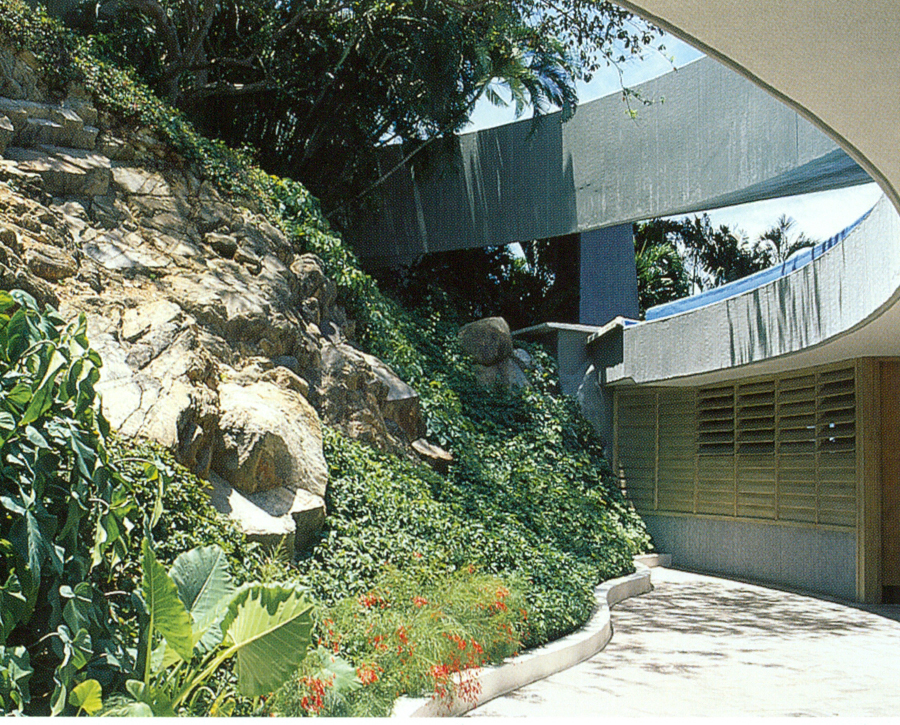