In the late 70s the French government became aware of the lack of representation of secular Arab world in France, especially in Paris. The arts, cultures and forms of knowledge linked to the Arab humanism remained fairly unknown to the French people, despite their historical relations with many countries in this part of the world and the fact that millions of citizens of Arab-Muslim origin live on French soil. In 1980 France and members of the League of Arab States agreed on a joint project to build a school to cover this gap, as in the religious aspect has the French capital Paris Grand Mosque built in 1926.

In 1981, then-President François Mitterrand significantly increased the scale of the project assigned to build a building located along the Seine. It was called can international competition to choose the project that best adjust to the claims, resulting chosen submitted by French architect Jean Nouvel in joint venture with Architecture Studio, Gilbert Lèzenes and Pierre Soria. The construction began in 1984 and AWI opened in 1987.

The AWI building is part of a comprehensive urban plan undertaken by President Mitterrand between 80-90 which includes other works with similar characteristics as the Quai Branly Museum, project also developed by Jean Nouvel on the Seine or the Arch of Defense.

The Arab World Institute (AWI) was built at the confluence of the Boulevard Saint-Germain to the Seine river near the bridge leading to the island of San Luis and a pier, in Paris, France.

The Arab World Institute embodies an allegorical synthesis of Oriental architectural concepts and the Middle East. This is a public foundation funded by France and the Arab States whose mission is to develop a deep understanding of the Arab world and to promote its culture and civilization in France and the rest of Europe. World showcase of Arab culture in Paris, the architecture of the institute should take into account various dialectical relations: 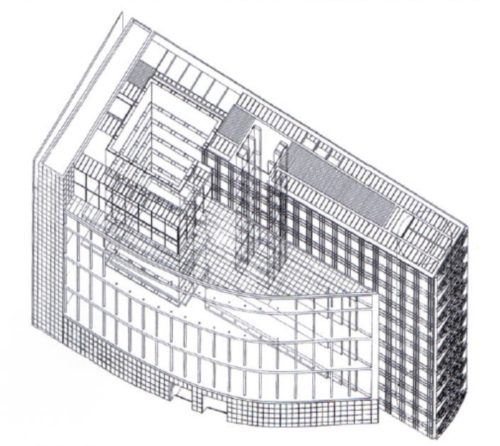 The urban issue was resolved with a building that is in alignment curve road on the bank, and that respects the traditional heights and dimensions.

The central body of the building, but returned to the neighboring college,facing it by a large paved plaza, a deep cleft between the two bodies, practiced in an alleged axis oriented to Notre Dame, giving access to temporary exhibitions that flows in a square courtyard. The western end of the building lets see the transparent cylindrical volume of the tower of books from the library. The building emphasizes archetypal elements of traditional Arabic architecture: the interior, the treatment of light through racks and filters and overlapping frames. The southern facade is the best example of this dual loyalty, as reinterpreted a number of frequently used geometric figures in Arab culture, giving them a contemporary form of mobile diaphragms, very similar to a camera. The space game related to the expansion and contraction; the hypostyle hall that evokes the great mosques, and a deep sense of the use of reflections, refractions and effects backlight provide certain magic to this place. 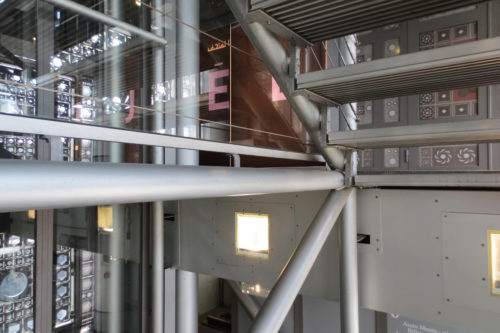 Constructing the building of the institute as dense and compact as possible, aligning with the Faculty of Arts and Humanities and the Sciences confronting it, the architects managed to integrate harmoniously into the neighborhood. The construction of this new building allowed the unexpected appearance of a large square, a place of visual break between the massive structures.

The lobby of the building is in the center of the ground floor on the south, bounded by four reinforced concrete pillars and a polished steel floor, like the restaurant located below. It begins six stairs and elevators, which form an open space that ascends all homes are located.

The AWI, consisting of two bodies, has a total of eleven floors above ground level and three underground. The northern part has a total of nine. They are generally low-rise or mid-height, except the double. Its spaces alternate with terraces and floor, such as the library and the northern part of the fourth floor where there is also a small overhang of the balcony. In some areas of the museum, on the north, the roof is down redial.

From the fourth floor of the building the two bodies are connected by a strip on the east side, in addition to two small bridges located at different heights. It is on this floor where, on the east side, the gap dividing the two sides are close to a square courtyard in which there are boxes. In the underground floors a spacious auditorium, a hypostyle hall and temporary exhibitions. These units extend under the square south of the highest part of the IMA. 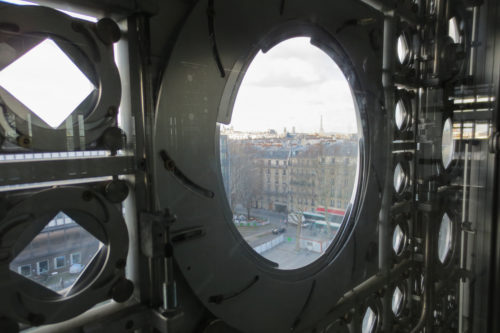 The most interesting are the AWI windows on the south facade. The size and shape of the crystals is exactly the same as those of the north side only, in this case, each square crystal has a series of photoelectric cells, “moucharabiehs”, like the diaphragm of a camera, that open when receive less light outside and vice versa. In each window there is a larger than other photoelectric central cell, and two smaller, geometrically arranged in glass sizes. The opening and closing of these elements results in geometric figures very similar to those found in the decoration of Arab buildings, simile very welcome by the owners of the institute Arabs. In some parts of the facade there is only hexagonal and orthogonal drawings like cells, which move with wind energy. Thus, the building automatically controls its own light and creates a play of light and reflections inside.

Filtered by “moucharabiehs” which has become the emblem of the construction, light penetrates smoothly into the interior of the building becomes architecture and essence of the place, define spaces, reflected, dissolved and recomposed to create the volume of space. One of the most beautiful verses of the Koran exalts “…light of light…” meaning that light is the expression and the expression is light.

In addition to the 6 elevators that carry visitors through the 11 floors of the building, it has metal stairs with a single shot means that while one goes down the other go up and intersect at a midpoint and another circular, both at the ends. In some cases the railings also function as fasteners, in other are used metal slashes. The framework of the staircase without riser with steps and tubular structure is attached through transparent walls creating a space elevator with vague boundaries between a lattice of light and shade.

The building is built around a void. On the fourth floor, from which you can access to the permanent collections of the museum, and suspended in the air, an inner courtyard, “Ryadh”, that no one can access becomes the center around which are organized, rotate and internalize all spaces. A zone “outside on the inside”, its function is not limited to be a reference in the organization of the spaces as was always intended by Arab architects. Much more than that, this place reminds us of the Arab proclivity towards one focused on the concept of “unity and mystery behind” philosophy. 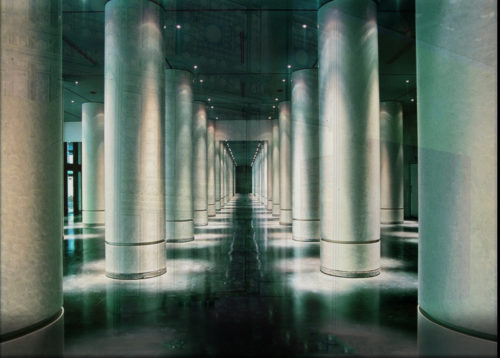 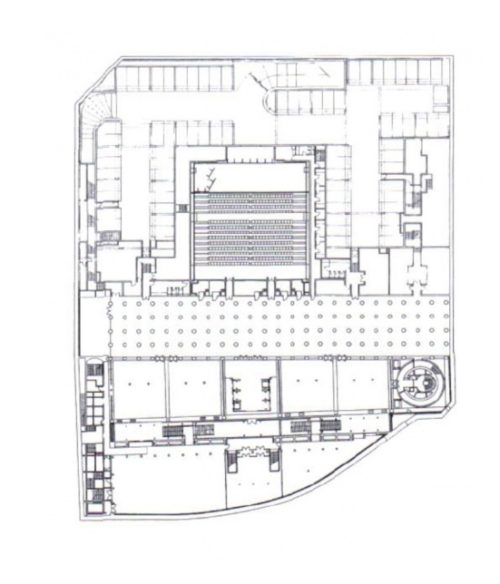 In the second level of the basement a “forest of columns”, a hypostyle hall that answers a very popular reason in the Arab world, creating the appearance of immensity, this inner immensity is the essence of the building itself, its base is discovered. The columns are not supportby of any vault or ceiling, on the contrary themselves are space, hollow, the vastness sinking into the earth. Relegating infinity to the subsoil and the darkness of night, the building’s architecture suggests a complicated investment telluric features a dark message that glorifies French soil in the alliance being East and West.

The Museum of the Institute, one of the pillars on which rests the institute since its inauguration, is located in the north of the building occupies several floors. Reopened in early 2012 after a complete restoration has a vibrant appearance that provides a comprehensive, intelligent and integrated view of the geographic area represented by the 22 members of the League of Arab States. 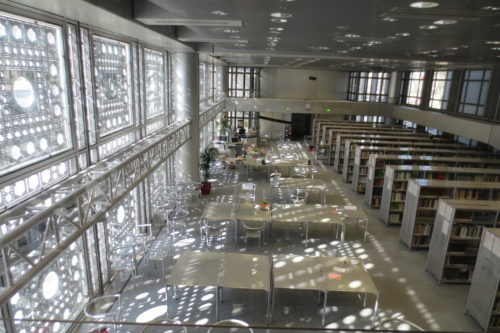 The library is other of the pillars of the AWI. Presents to the world the culture and civilization of the Arab World in encyclopedias and collections written in various languages. The reading areas in the library are divided into three levels, connected by the Tower of Books a spiral that rises from the 1st to the 7th floor.

At one end of the building the Tower of Books, no Arab World Institute could have been designed without their library started. Its shape recalls the Oriental buildings like the Tower of Babel or “ziggourat” Syrian, an architecture with a strong connection to the sky. The tower of the Institute is anchored to the ground by the books, which, while not giving access to at least give it divine knowledge.

The structural system used in its construction is coated with a curtain wall of glass and aluminum metal skeleton. The building has two faces and two bodies, on the north side, facing the river, the building is covered with glass in which clear images of the city on the other side are taxed. On the south side, the glass wall is covered by a type of metal lattice that resembles the “moucharabieh” typical lattices found in the patios and balconies of the Arab countries. The two bodies are united by an elevation bridge on the 4th floor.