In an increasingly dense city like Chicago, to obtain views from a new tower is to be negotiated with existing ones. Aqua Tower considers criteria such as views, sunscreen and a vertical displacement contour give the structure its sculptural form.

Its vertical topography is defined by the terraces that change of plane along the entire facade of the tower, allowing a strong connection to the outdoors and the city as it offers a front to be occupied and enjoyed by its inhabitants. Its development results in a sculptural building when viewed obliquely and from afar becomes a thin rectangle. The project became effective in 2006 and construction began on March 12, 2007.

Located at 225 N. Columbus Drive, near Lake Michigan in the north of the city of Chicago, Illinois, USA.

From its balconies you can see Lake Michigan, Harbor Park, Millennium Park, Frank Gehry’s Bridge and The Cloud Gate.

Its powerful form suggests the memory of the limestone outcrops and geological forces that shaped the Great Lakes region.

The name “Aqua” follows the nautical theme developed in the eastern shore and is represented by wavy forms from the balconies and blue-green tint on the windows which give the peculiar shape of its facade, defining a particular highlight in Overall, something like a vectograma.

The tower has a podium of 13,000 m2 on three floors, structurally separate from the tower. The facade, with its irregular curves and opaque glass designed to prevent bird collisions. 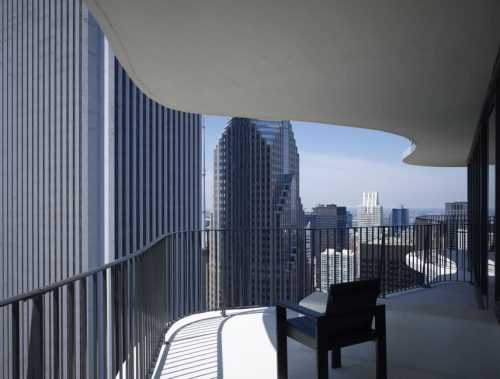 The balconies are rippled, slightly varying forms in each plant and creating a surface similar to a curtain. Its depth has been calculated so as to maximize the sun protection and the views beyond the perimeter of the building. In the bedroom area fly approximately 3.7 meters, reducing or varying their surface as they travel along the glass, thus allowing to have a changing facade on all four sides of the building.

In conjunction with a water collection system, a power efficient system and the large roof garden located on the level of amenities, sought to turn the Aqua tower in a tower with LEED certification.

Mainly its plants have been used for residential units and hotels, but also has many shops and commercial offices.

Offers 736 apartments distributed between the upper levels and means: 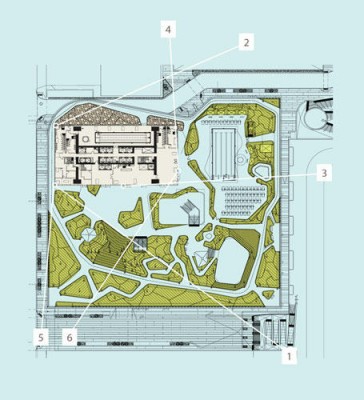 On the floors of the tower base and surrounded by terraced gardens that occupy 7669 m2, located two floors are dedicated to different areas of entertainment, barbecues, swimming pools, jacuzzis, saunas, jogging track, reading rooms and a spa and other services.

The reinforced concrete structure is supported by 31 drawers drilled into the rock 110 meters below ground and placed six meters in a layer of dolomite. These are supplemented with 274 bells of compressed air, smaller and sunken clay.

Although the Aqua Tower is a building whose structure is concrete, levels 1, 2 and 3 were constructed of steel, creating a metal tray on which to spread the concrete.

The steep walls tower used to transfer the loads of the columns, instead of downloading on the flagstones of the floor slabs.

The construction of curved shuttering at the edges of the balconies was guided by a global positioning system. Each floor plate has a unique curve on the edge of the slab and had to be created individually. The challenge of building 82 unique dishes to the floors was resolved using software engineering and surveying in conjunction with computerized digital CAD files obtained and transferred the coordinates of each robot to the station used in the place. 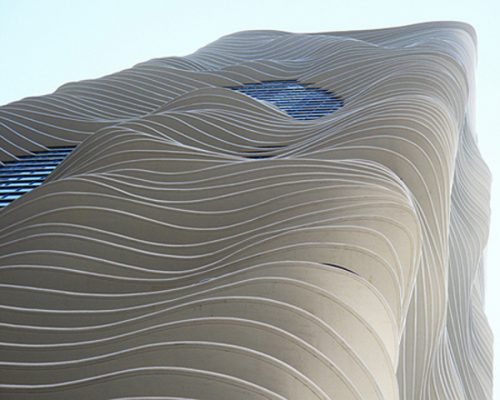 Structure set out in the front

The skin of the building is approximately 300,000 square meters of different crystals of high performance, nuanced, such as reflectivity or opacity. In areas where non-proportional balconies enough sun protection special solar glass is used both for the light to heat.

The architects used steel balustrade painted black to ensure that interfere as little as possible in the whole facade different shades whose lenses get dark. Although a glass balustrade could have offered a better view and a greater sense of space, they chose the first option because the latter had greatly increased construction costs.

The balconies on Aqua are an extension of the internal floor slab so they are treated with an insulating paint to reduce heat transfer into or out of the apartments. 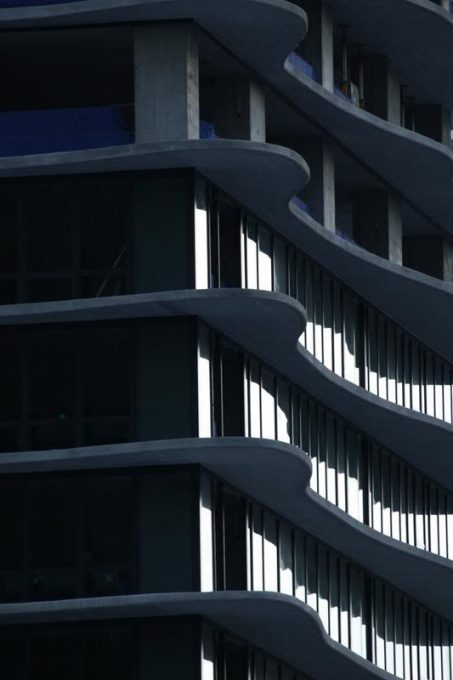 Water movement intended to evoke the building’s facade is achieved by each of hormgión slabs of the floors, cast in situ, are distinct and undulating by its many balconies.

Within dwelling units, the architects selected materials and equipment with sustainable features such as bamboo flooring or recycled fixtures that help reduce water consumption.

Instead of feeding the plants with collected rainwater, has set up a drip irrigation system for efficient use of water, which balance is continuously drained through a layer of gravel under the ground water leading directly to the sewers to prevent moisture from reaching the walls.

The vegetation on the roof of the podium is not only a cosmetic benefit, also fights heat island effect during the summer months to reduce the ambient temperature around the block.

A platform will lower telescopic swivel arm from top of the tower to allow cleaning of the windows of the tower are not available to any balcony.