Rwanda is one of the smallest and most densely populated countries in Africa, mired in poverty and fear from the 1994 genocide in which more than a thousand people were killed. Since then there are many international organizations have tried to help out the small country so you can get ahead. These efforts often come to see the light and surprisingly the government of Rwanda is free of corruption and usually mostly displayed friendly to receiving any assistance.

In 2009 the association Women for Women International, responsible for carrying out humanitarian work to help women in poor countries, where just being a woman means one of the largest imaginable barriers to succeed on their own, received a plot of five acres from the government of Rwanda with the task of building a center of help and support for this group. The association contacted the Sharon Davis Architectural firm based in New York, who decided to take over the pro bono project by spending nearly four years in both project design and supervision of construction.

The center should become, and so has done, in a virtually self-sufficient complex where women could learn from such diverse topics as hygiene techniques to improve the production of their land or develop a business plan for their local economy.
In this sense the project was a success from the start, involving future users in the construction itself, instilling the knowledge to be able to not only take over the maintenance of the center but that can collaborate in the creation of other similar in the future.

Even half a million bricks used for construction were made by the women of the area who now have an additional source of income to these bricks have continued to produce and sell to the builders in the area.

The project is located in the town and Kayonza, some 100 kilometers east of the capital Kigali, about an hour’s drive.

The land given by the government for the project covers an area of ​​two hectares with a slight slope topography.

At the organizational level the project masterplan typology is based on a classic Indian village or camp in the area, with a central square around which a series of pavilions which are carried out various activities are organized. This arrangement helps the project to “own” a larger area while maintaining a relatively small footprint while providing built a greater sense of security to its citizens, who can observe almost every corner of the town at any time detecting any intruder or any problem that another member of the community may have.

The project literally acts like a small village and is virtually self-sufficient by having classrooms where not only educate but also farmland, a small farm and a market through which women can sell the goods they produce to the rest of the community.

At the classroom level, which are the main compositional elements of the project, the form of these are inspired by the reconstruction of the king’s palace located in another town further south. Each class is comprised of two main elements, a brick wall in a spiral geometry and a metal housing separated from said wall.
T
he shape of the wall favors the form of education in the area where a group of 20 to 25 people standing around the teacher or community member intending to transmit knowledge, whether of a technical knowledge or a simple story legend or abundant in the culture of the area. The shape of the wall also ensure privacy without placing fences, and in some areas the bricks were placed in an interleaved to allow natural light without major openings that could pose a distraction or a privacy issue.

The metal roof is circular in shape with a slope gable allowing the collection of rainwater which is then stored in underground tanks to keep it fresh. All the structure supporting the deck is separated from the wall that shapes the interior space, which not only allows more natural light but in turn helps to maintain a comfortable temperature inside to allow the movement of air below itself.

To ensure the success of this long-term project should be as self-sufficient as possible. To achieve the architects focused on leverage and optimize those resources that are most valuable in the area, in this case water and fertilizer.

To save water all covers act as collectors sending the collected water reservoirs located underground to keep it cool and protect from light. Later this water is filtered through a filter that work with solar energy and water is sold as drinking water to the rest of the community once women themselves center stocked.

The issue of fertilizers was addressed by installing a series of smart toilets that are able to separate those fertilizers that are found in human feces and can be good for the crops of those who are not. Again these fertilizers are sold to the community once the crop of women themselves center stocked.

The small town has all the space needed for the development of their activities. The plaza is emerging as the focal point of the project, surrounded by the various classrooms are those that have given “image” to the set, but on the ground ranks Women’s Oportunity Center can also find a small farm, bedrooms, guest apartments, administrative offices, kitchen and a market.

Focusing on the construction of the classroom, the structure that supports the deck is all metal, formed of beams triangulated to give robustness. On this structure a corrugated sheet is placed, also metal.

The brick walls play the role of front, dividing the interior space from the outside, but do not meet any load bearing since being handmade project engineers doubted his strength, but later it was shown that these bricks are much more resistant than expected and could probably withstand even earthquakes if any.

The will of Sharon Davis Architects was to use local materials throughout the project, hence opting for mud bricks and corrugated metal as main materials for construction.

The bricks were made on site under the supervision of site engineers with clays, water and molds that give them the right way to be fit for construction, while the corrugated sheet is a material easy to get on Rwanda. 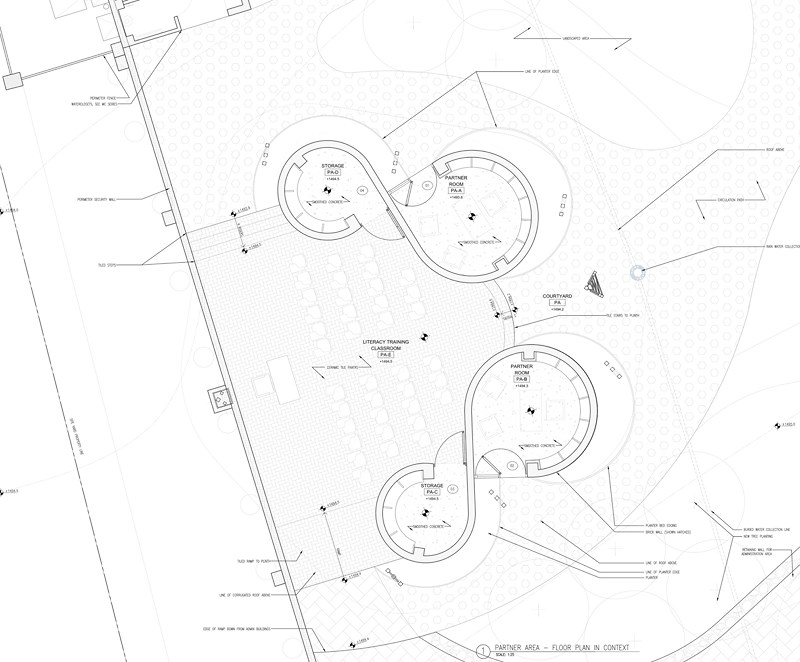 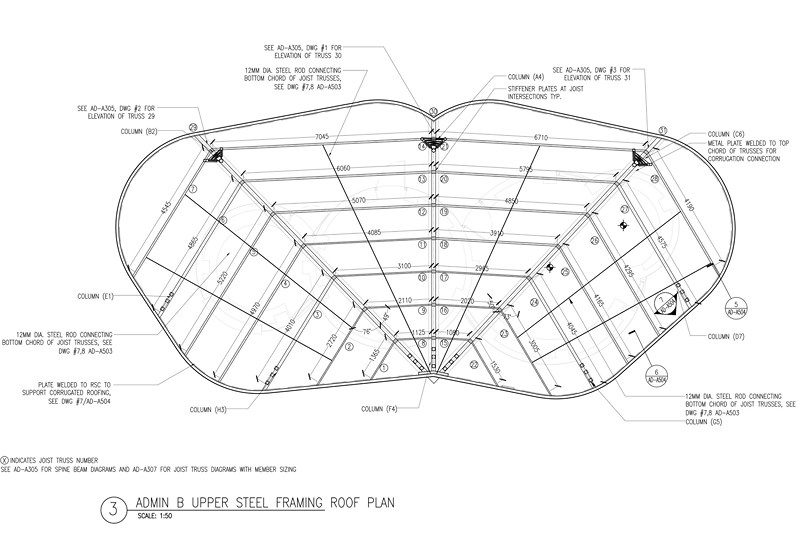 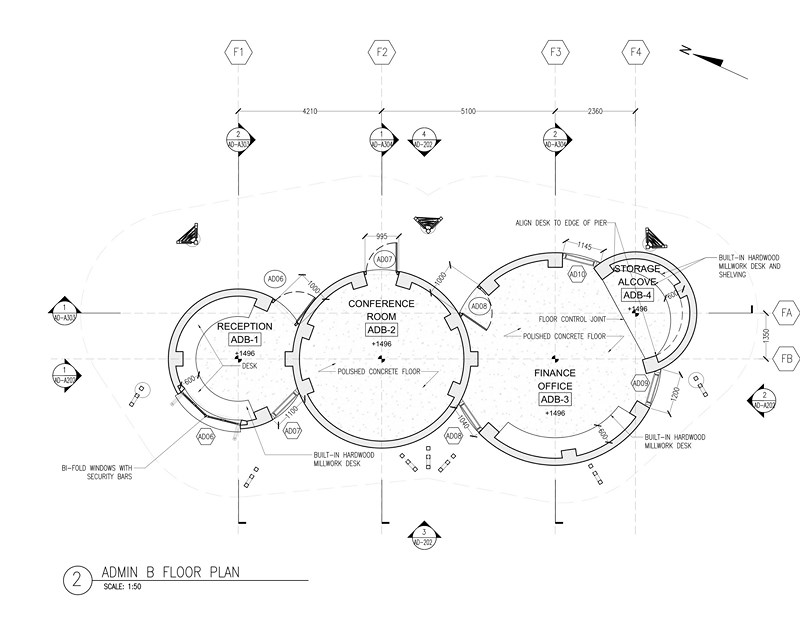 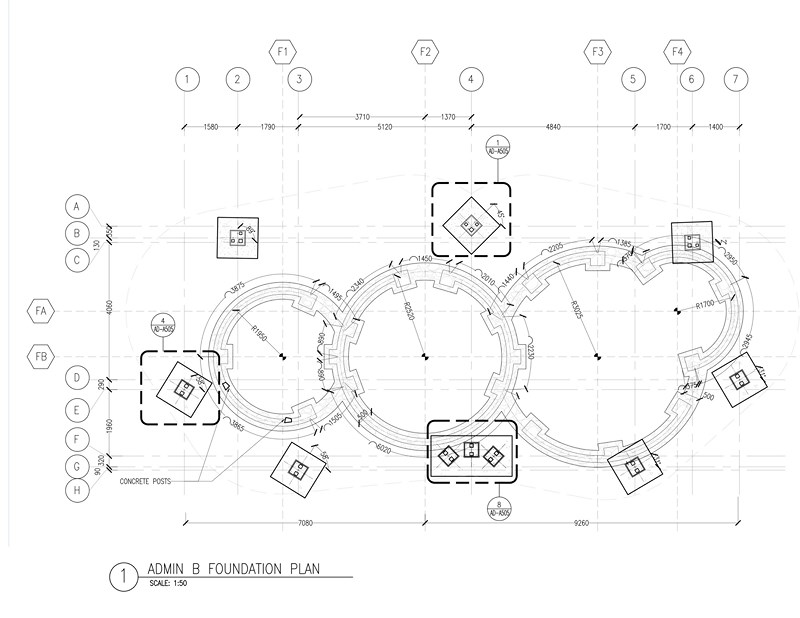 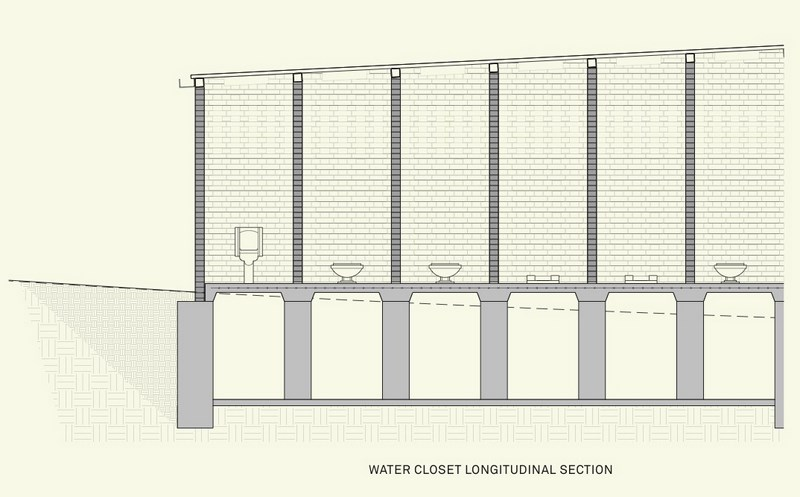 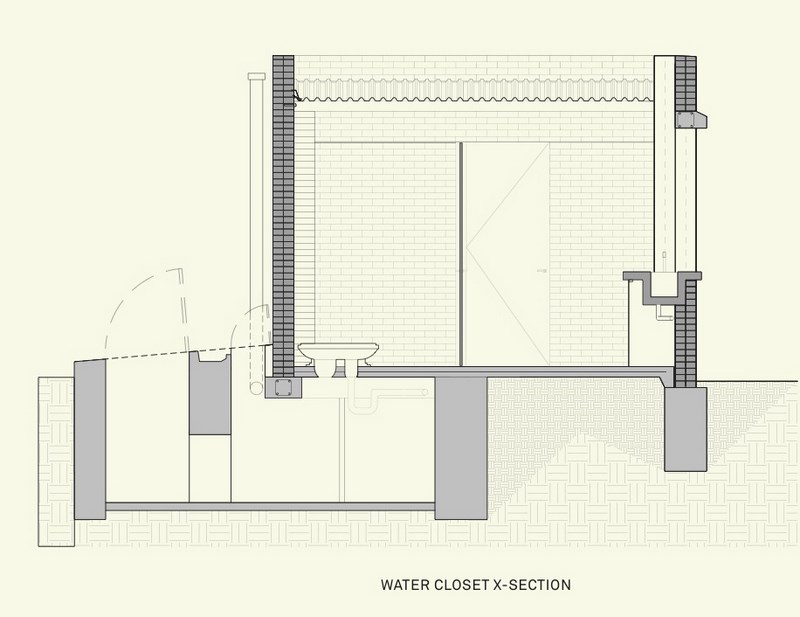 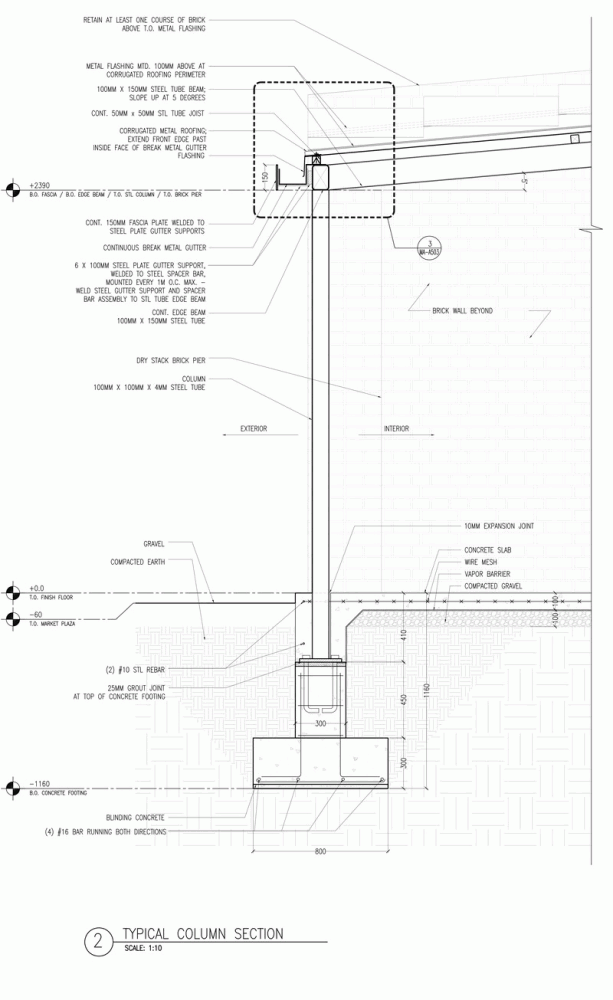 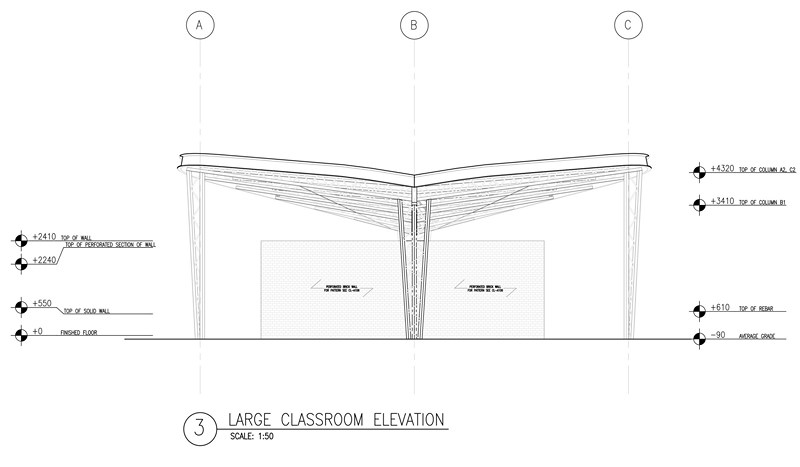 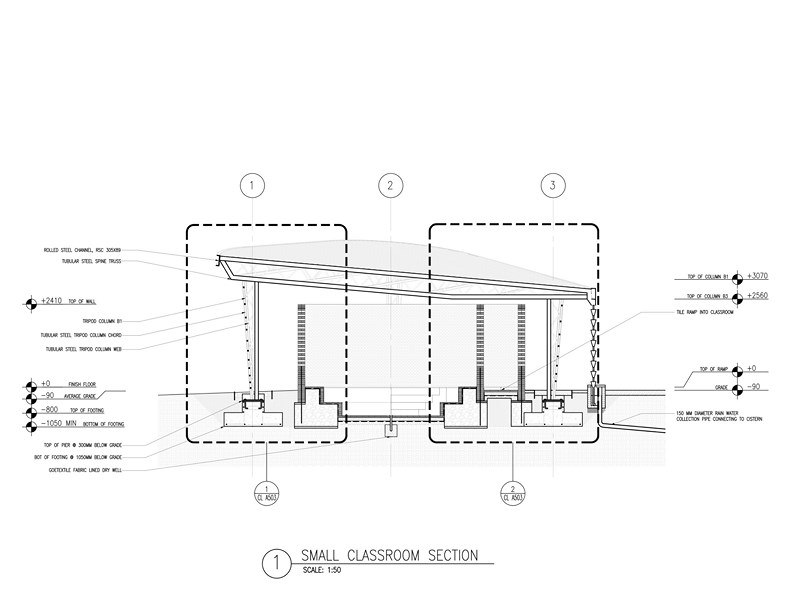 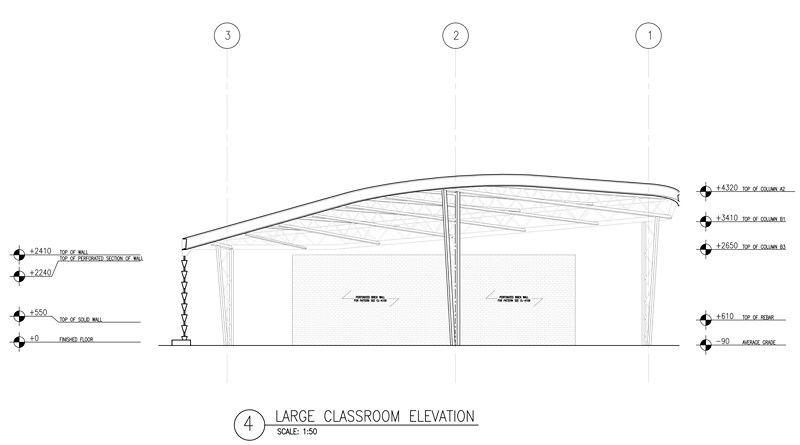 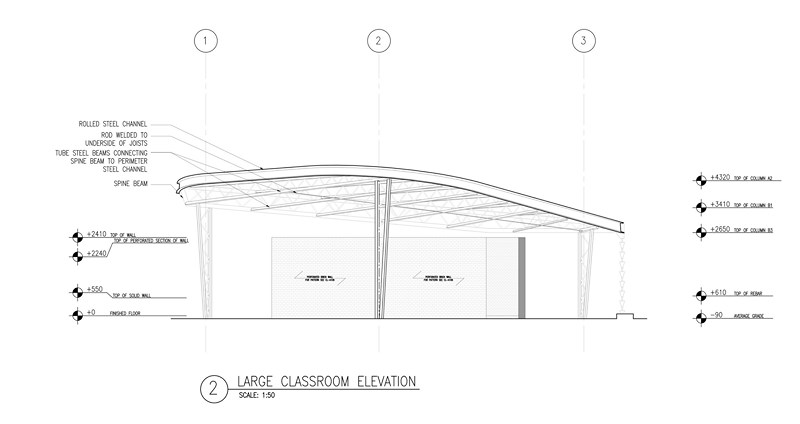 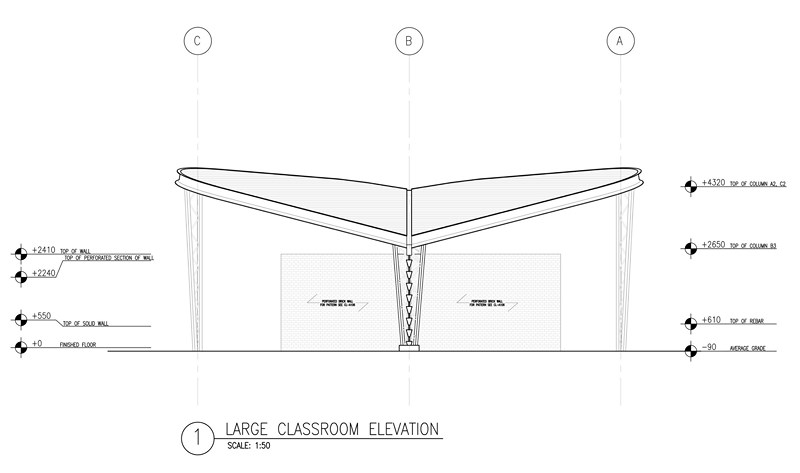 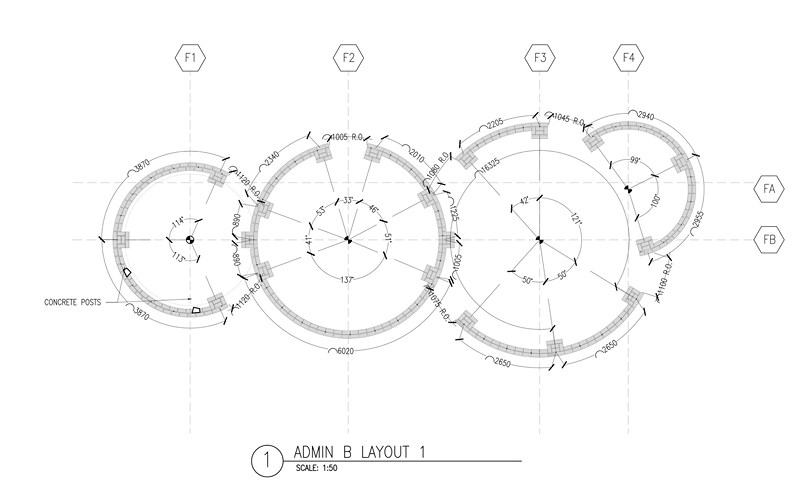 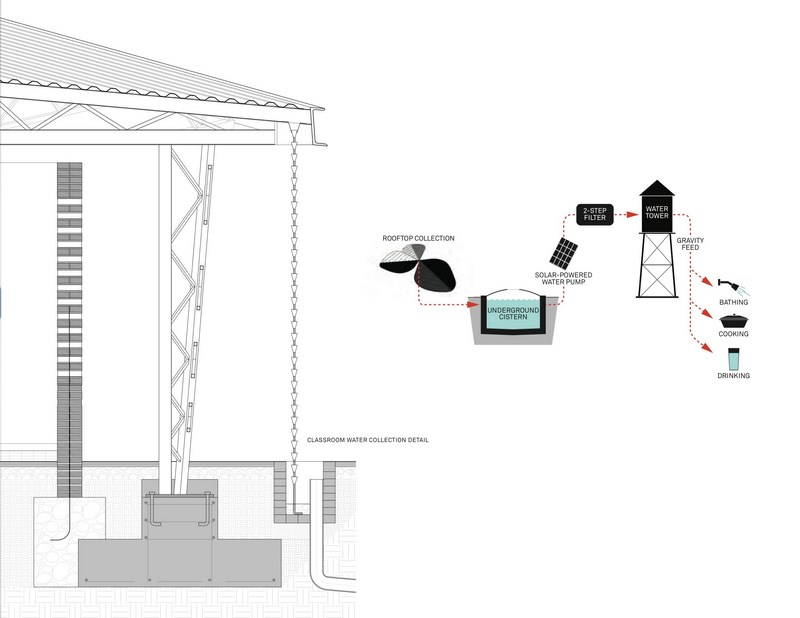 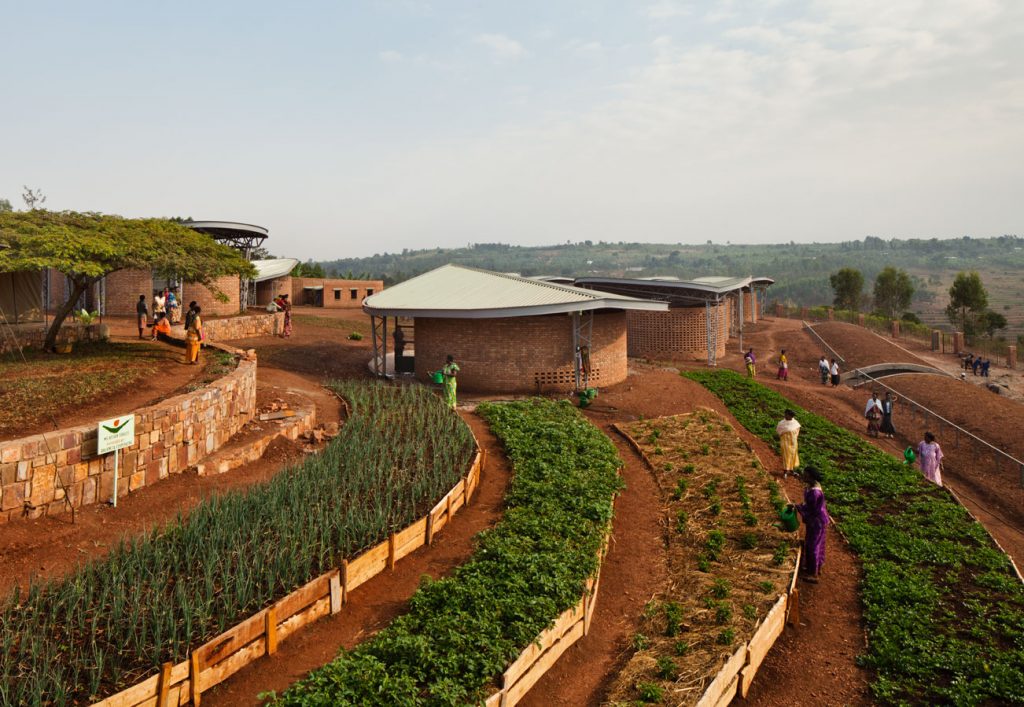 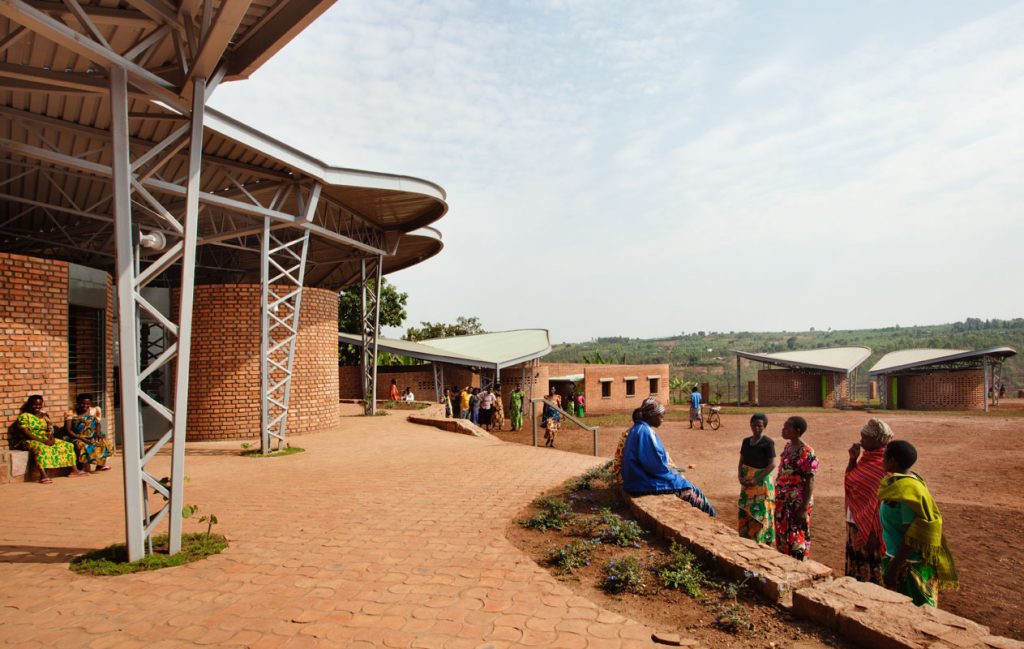 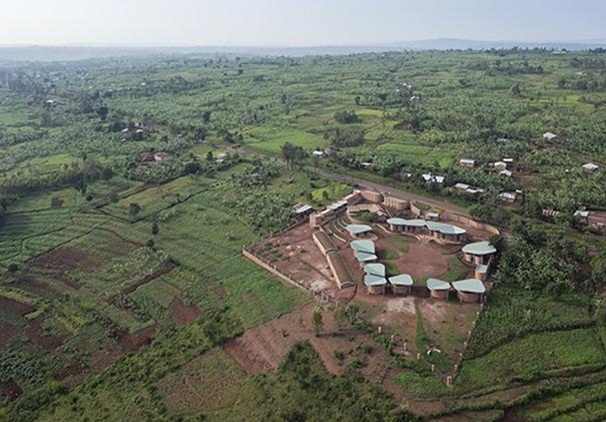 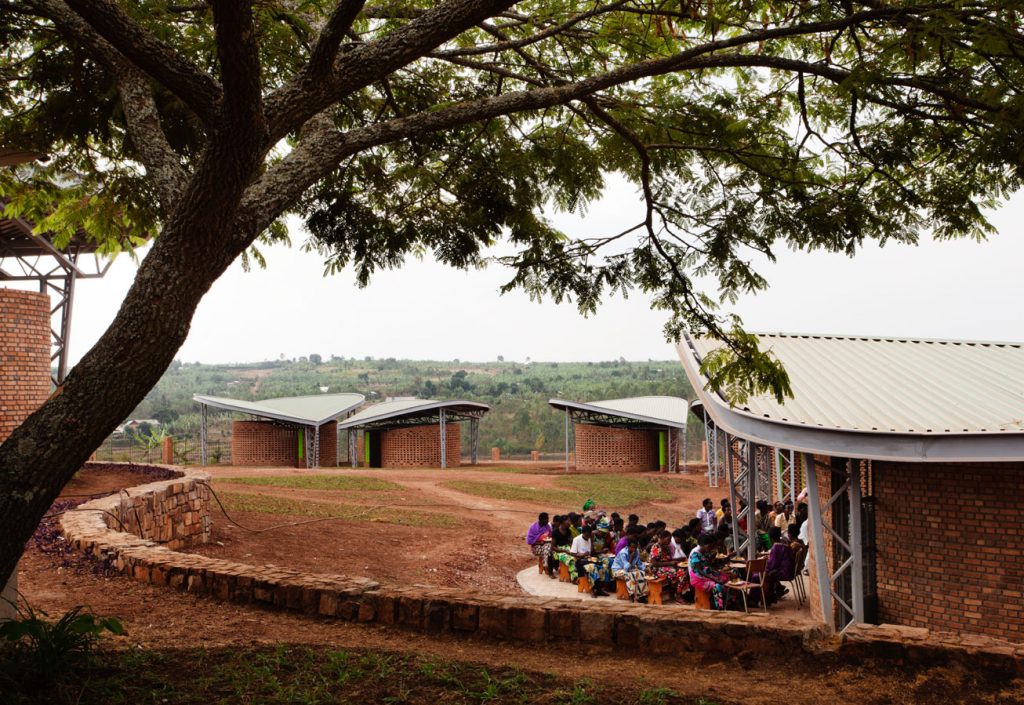 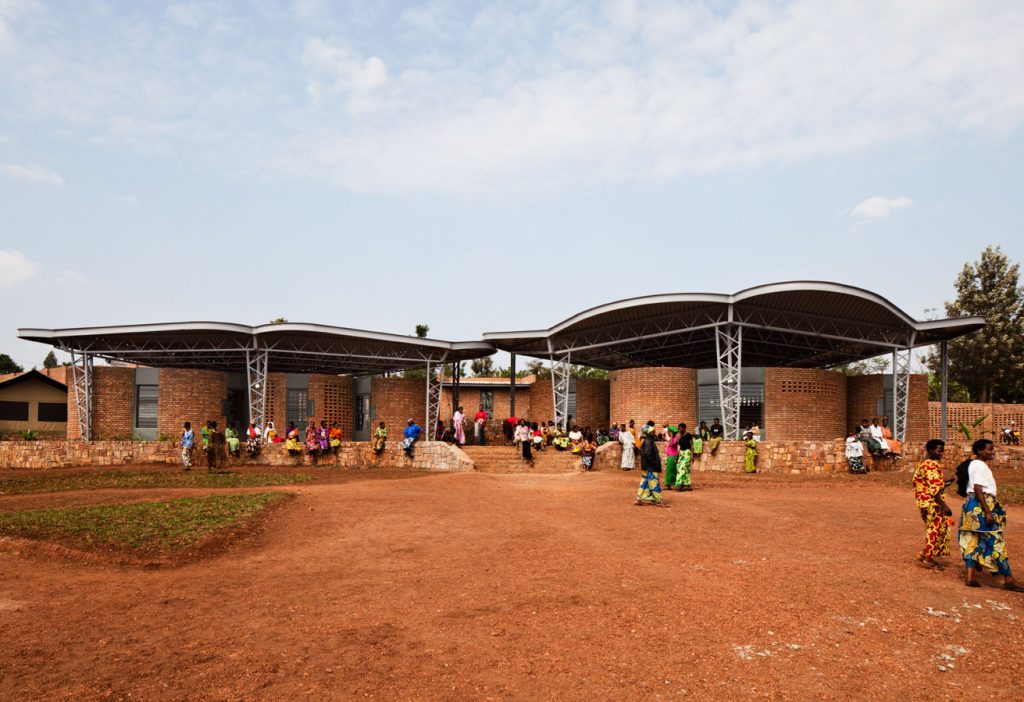 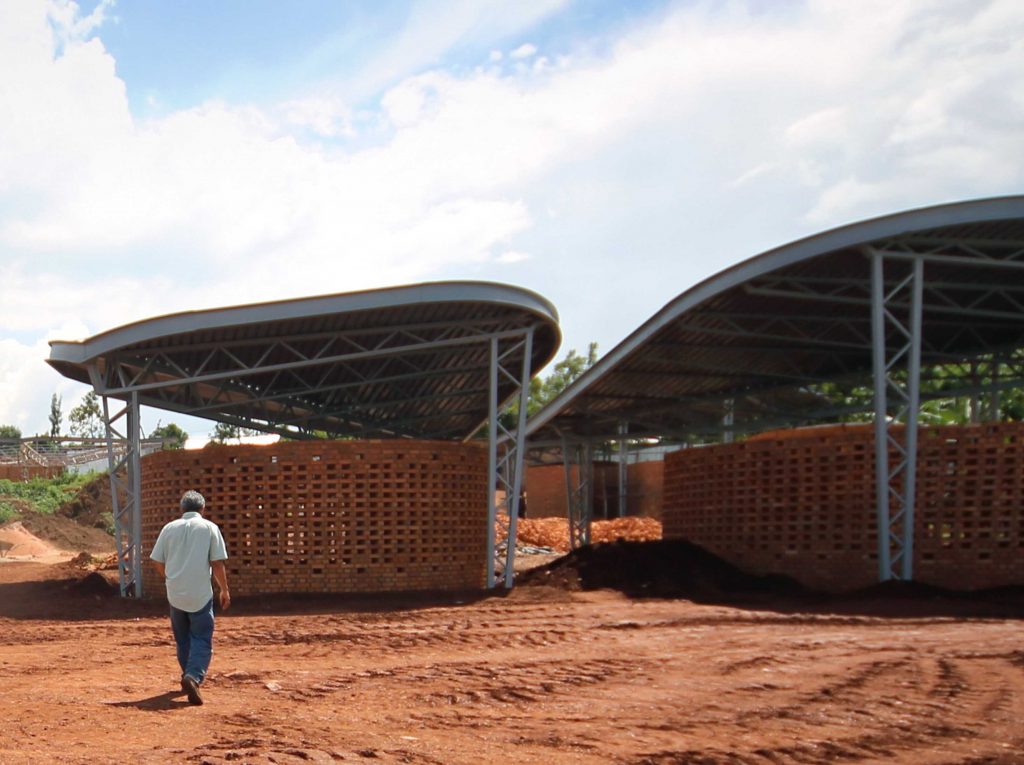 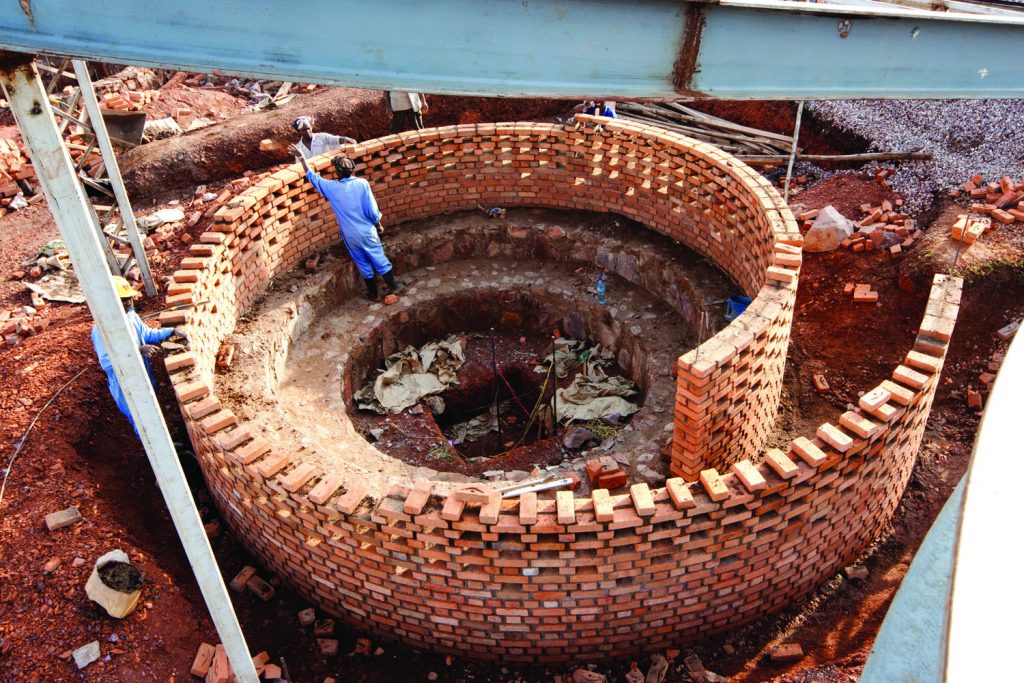 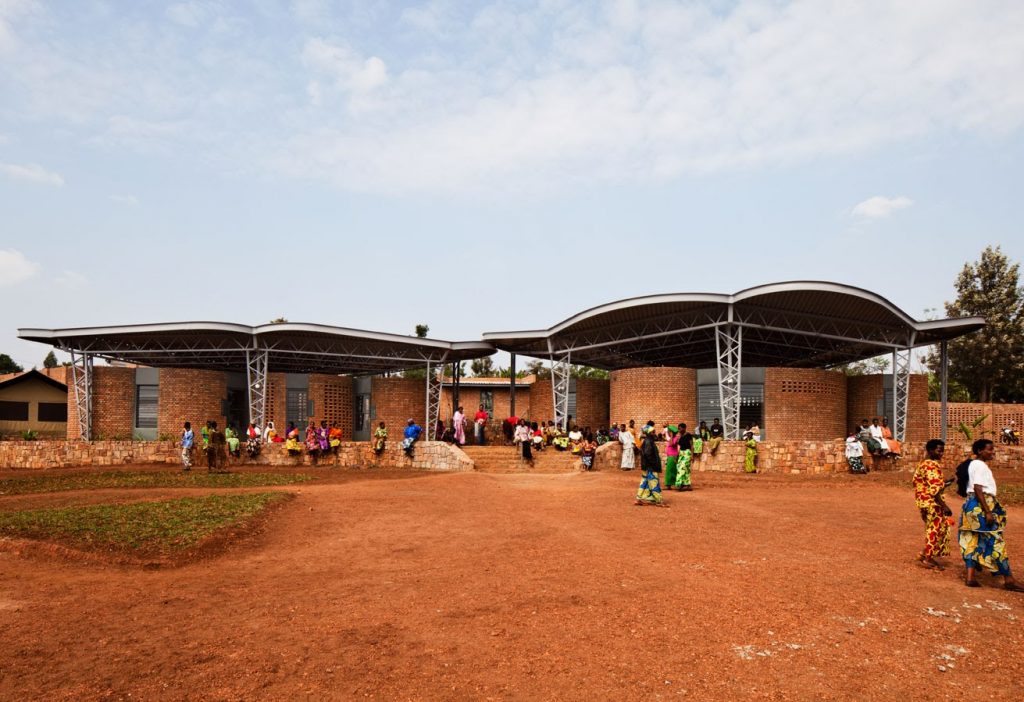 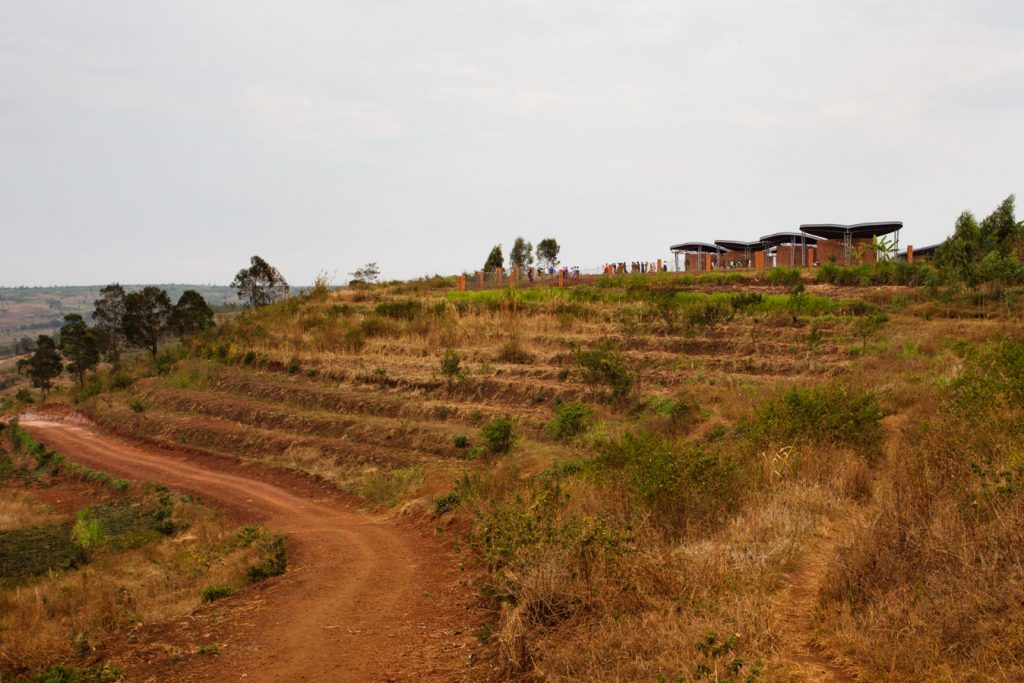 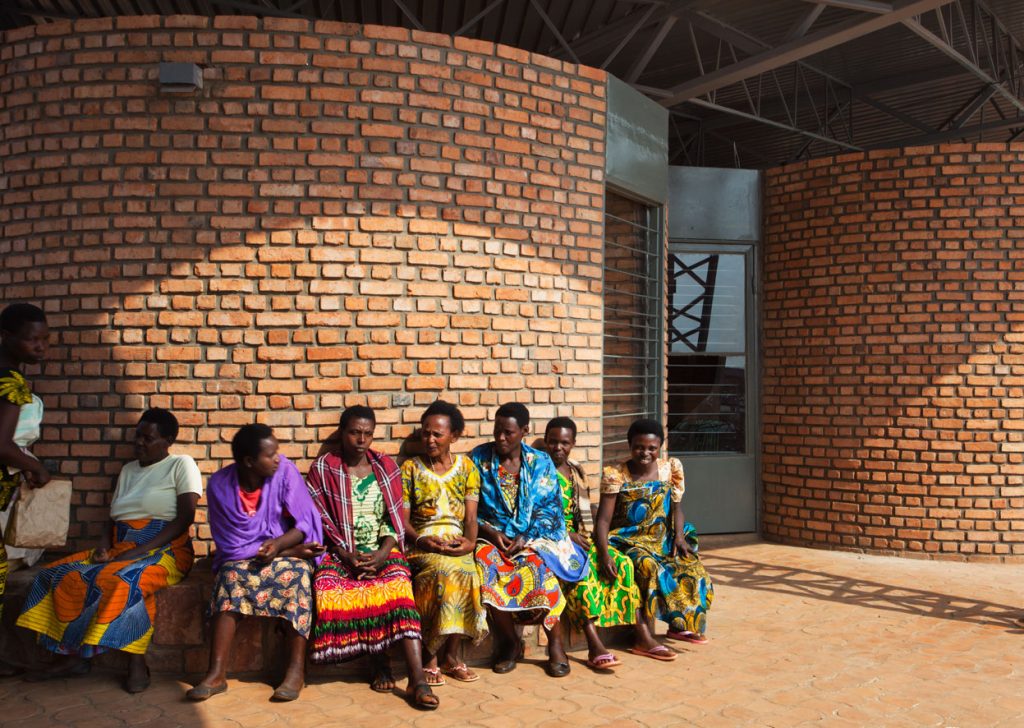 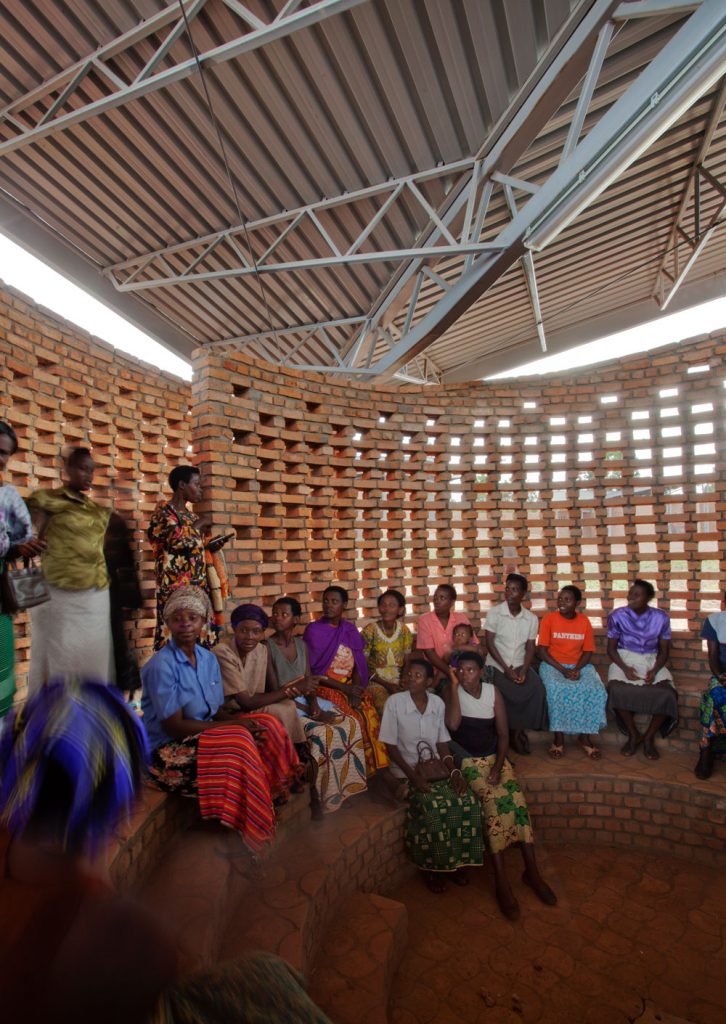 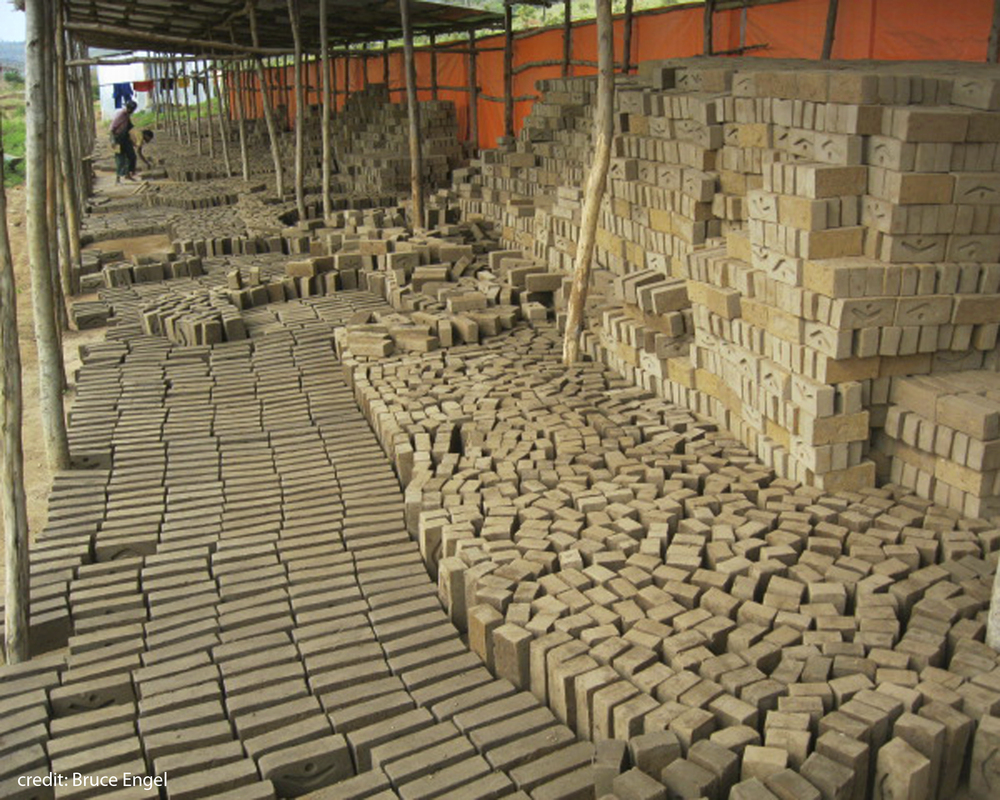 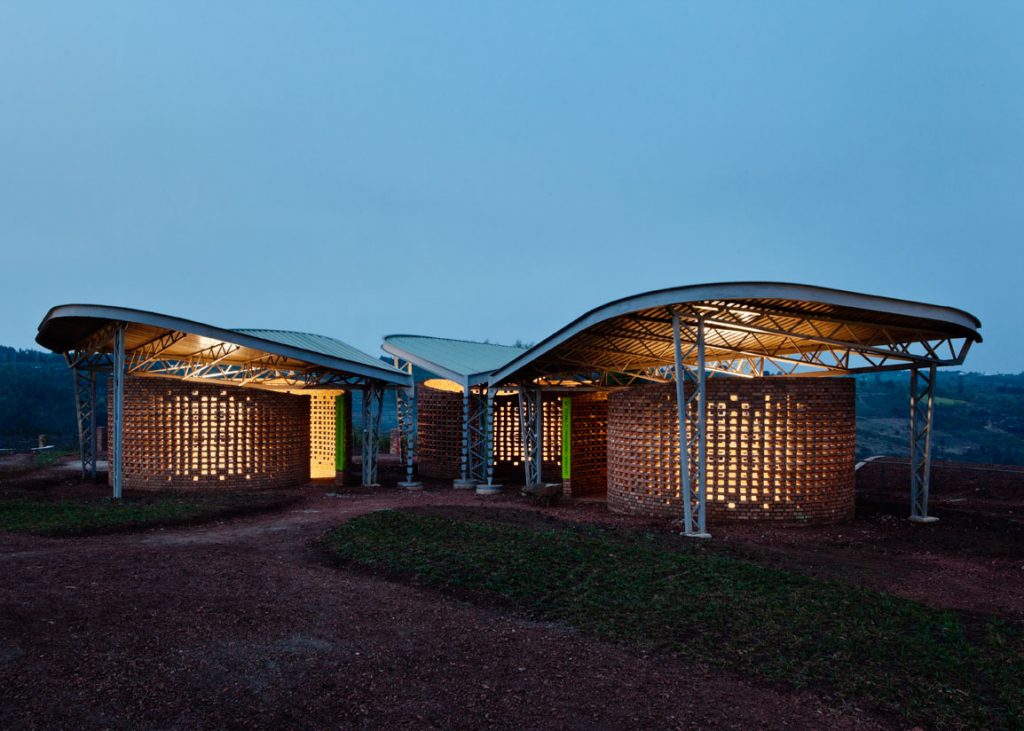 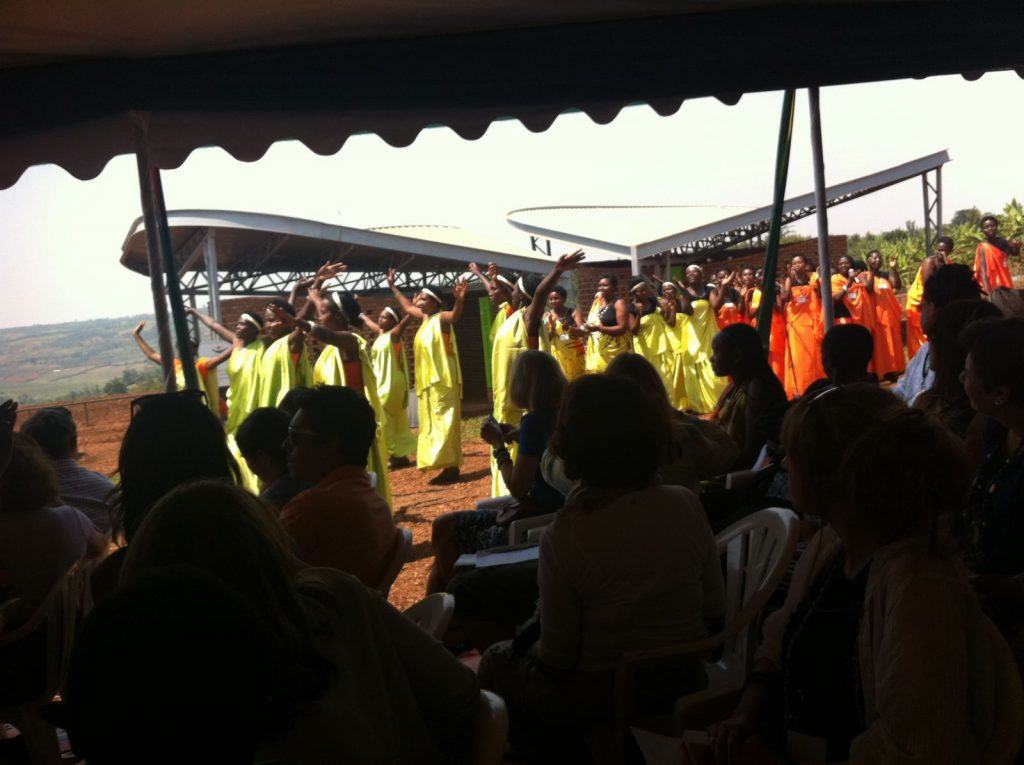