Frank Lloyd Wright, the acclaimed architect, left his signature on at least a dozen buildings in Ohio, including the J. Burton House Westcott. Completed in 1908, the House
Westcott is also the first design of the architect in this state.

When the striking building was finalized in the local newspaper carried an article was titled “The more different from Springfield Estate” and said: “When Mr. Westcott was asked what type of architecture, said…” I did this question to the architect, and he said that was the real Frank Wright style… he also told me that this style was based on only one thing, there was no mixture of Gothic and Colonial as seen so often. All lines of the house are right, correspond to this style of architecture “(Springfield Daily News, 20 Dec. 1908).

The house is probably best known for what has not been that for what it is. The interior alterations made in the 1940’s that made the plant open in a multi-unit apartments, architecture changed so significantly that it no longer reflected the design intent of its architect.

After the death of marriage Westcott, the house was purchased in 1926 by a book dealer who lived until 1941, when he died. In 1944 it was bought by Eva Linton, who divided the house into five one bedroom apartments that were rented and later sold part of the plot definitely changing the face of the whole work of Wright.

After passing through the hands of other owners and thanks to the efforts of the Ohio Historical Society in 1974, the Westcott House was placed on the National Register of Historic Places and acquired by the Frank Lloyd Wright Conservancy Foundation, which has restored and returned part the nature of its designer.

Burton Westcott in 1907 bought the northwest corner between East High Street and Greenmount Avenue
Mr. Westcoot, an industrialist and civic leader, bought the Westcott Motor Motor Company of Springfield in 1916 decided to move his family home to the prestigious East High Street, a neighborhood of Victorian houses and Romance of Springfield, Ohio, United States, where previously it had built his house.

It must have been a shock to the neighborhood where the Westcott family commissioned Wright to design its groundbreaking home.

Wright designed the Westcott House in a new and different regional style that would later be known as Prairie Style. His features were planning open gently sloping roofs and broad overhangs, bands of casement windows, usually with windows and in general a strong horizontal emphasis. It is also important that the house is integrated with the environment in which it fits, that looks natural in any configuration.

During its heyday, the Westcott House not only embodied the innovative designs of Prairie School architecture, but also extended the concept of Wright to relate the building to its surroundings by a terrace, a pool, gardens and other landscape elements.

The house was back from the street, on a somewhat elevated. Stucco structure with 410 square meters of living space, also had a considerable basement and met many of the features of Prairie Houses. In its construction were used traditional materials of the Prairie Houses, stucco, wood and Roman bricks.

A large pergola covered with an intricate wooden trellis connected the additional volumes of construction, with the main house, a design element included only a few houses in the style Prairie. The residence of Darwin D. Martin, built in 1904 and located in Buffalo, New York, also incorporates this design concept.

Trails were built in masonry and concrete slabs that were headed for a large pool sunk into the ground, a reflecting pool on the roof of Roman brick color. On the walls were not visible to downspouts that do not interfere with the horizontality of the house.

In the northwest corner tanks were located to contain rainwater collected by gutters in each corner of the house, the water collected was used for bathing.

A small door on the west side of the house was used by the Iceman to put their supplies directly from the large existing cooling chamber in the house.

Frank Lloyd Wright, considered the heart of the house, the fireplace, the center of family life, lifted the large and welcoming heart.

In the Westcott House, placed two wooden partitions at right angles to the fireplace and they built two seats and a library, family corner illuminated by indirect lighting. In this room was accessible to a large patio on the outside, through two symmetrical doors. On these doors were placed a wire rack, specially designed as a support for a canopy of summer.

As usual in Wright, up the stairs placed a large skylight of six panels with geometric designs in amber, allowing natural lighting. Overnight, the staircase was lit by lamps of glass placed on top of the stairs.

The plan of the Westcott House follows the pattern characteristic of the Prairie Homes Wright. The essential elements include a cruciform floor plan around a dominant masonry chimney located in the center of the living room and an open interior in which the furniture is an integral part designed in the context of Movement Arts and Crafts.

The Frank Lloyd Wright building includes all the components related to architecture, the connection of separate structures through a pergola and terrace, extending the influence of inside-out architecture, enhanced by the ballot designed by Wright and landscape. Structural steel beams and wood.

This was on the east side, opposite Greenmount Avenue. Had to climb
several steps before reaching the door leading to the reception area, a hallway lit by the skylight of the stairs and a horizontal band of windows that run along exterior walls. Wright uses an unusual location for inputs with the intention to void any sense of boundary between indoors and outdoors.

Following the characteristics of the Prairie Houses, it was the main floor, where life was taking the family around the fireplace in the lounge.

The room was an open space that stretched 18 meters. Some parts were used as living room, sometimes as high and there was also a library.

The open plan of the room was broken only by the high back of the chairs around the table facing each other, perpendicular to the fireplace.

The fireplace wall was made with thin and long with white cement bricks joined together in horizontal and vertical terminations gray bricks and detail that underscores the flatness of this area of the wall and makes it appear larger.

The rest of the walls of this public space on the first floor, were covered with a Japanese-inspired material called encaustic plaster, rough and earth-toned pigments mixed with paraffin and finishes, giving the walls a very organic texture. The endings were all very dark and grainy wood.

Following the concepts of this style of houses, the interior spaces were not locked in the traditional sense and abundance of windows contribute to the sense of openness and space.

Wright felt that this multi-purpose approach, building on areas where daily life unfolds made the house seem larger and more relaxed. When did use divisions were usually furnished or screens, rarely with walls.

A door in the dining room, leading to the easement area on the first floor. Although well finished, in these areas were used less expensive materials and more standard. For example, the door is oak with brass fittings on the side of pine dining and nickel on the side of the kitchen.

The kitchen was big enough for a house at the time, had covered two walls of cabinets with glass doors and many counters. Off the kitchen was built a large laundry room, a door leading to the backyard and a staircase to the second floor.

On this floor were six bedrooms.

The two children of the family had every one his own, with special compartments built into the walls to keep their toys.

Two other bedrooms were used by service personnel and the other two, one was used by Mr. Westcott, the other by Mrs. Westcott.

The latter, with a door that connected, including dressing room, fireplace, private bath, in which there was a third tap jars that fed the bathroom with rainwater collected in tanks outside, and a terrace-porch to sleep to weather very hot night. Mrs Westcott’s bedroom had a jewelry storage locker built into the cabinet.

A pergola connects the garage to the house and a driveway runs along the west side of the property to the north from East High Street in the rear, where it curves east to get to the tennis courts and horse riding area. 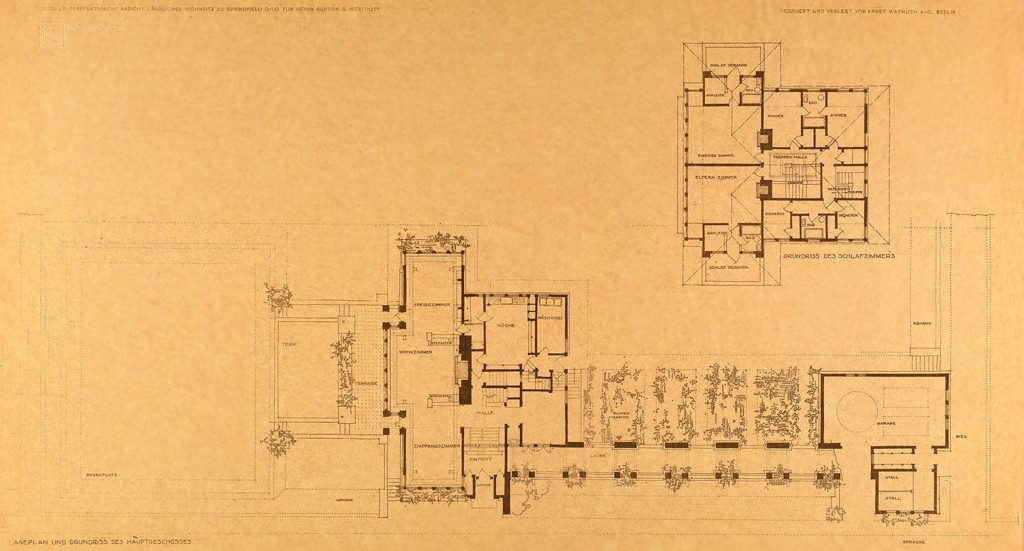 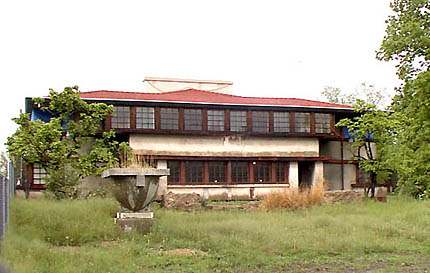 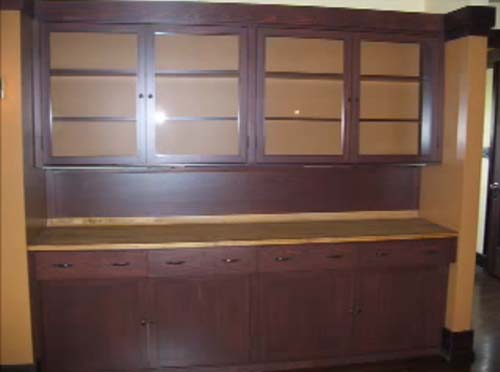 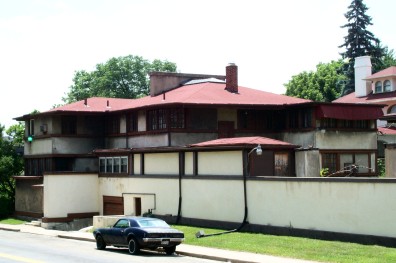 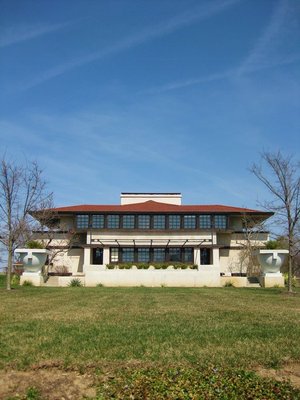 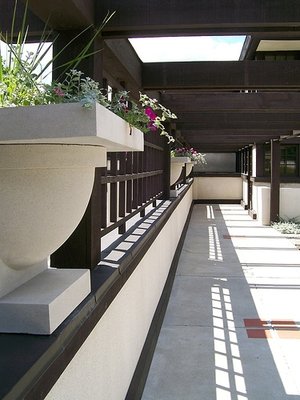 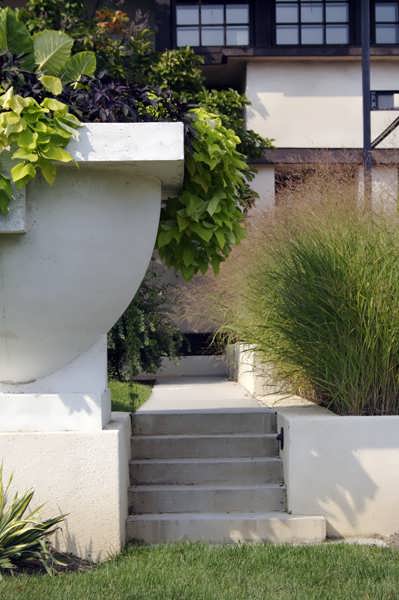 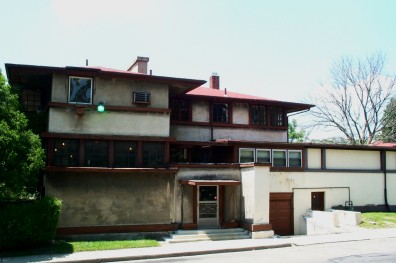 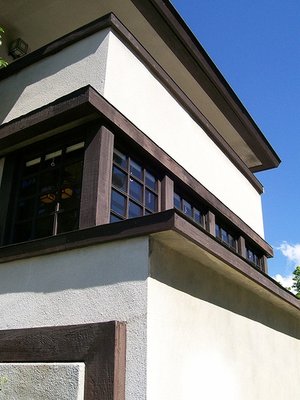 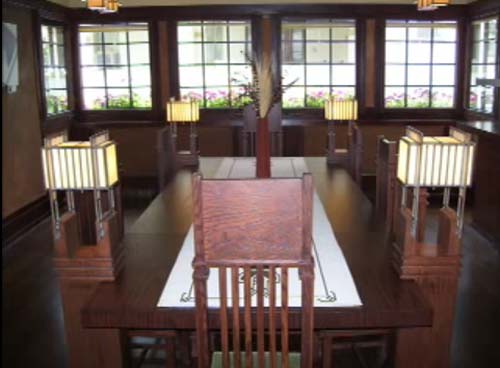