The Waldspirale is an expressionist-style residential complex that began construction in the 1990s and ended in 2000, the same year its creator died. The name derives from a “tree-lined spiral” which reflects both the general plan of the building and the fact that it has a green roof. It was designed by Austrian artist Friedensreich Hundertwasser and planned and implemented by architect Heinz M. Springmann who had already participated with Hundertwasser in several projects. The construction was carried out by the Bauverein Darmstadt company.

Hundertwasser‘s influence extends to the shape and design of the building, as well as to the design of outdoor facilities. Hundertwasser originally drew it on a napkin while having dinner with his client. The basic design did not change significantly from this original concept. The Waldspirale was the last of the artist’s creations that died in 2000, aboard the RMS Queen Mary 2 en route to Germany from Australia to see the work.

The building was built in the east of the Frankfurter Straße, in Bürgerparkviertel, 64293 Darmstadt, Germany, in the new neighborhood named after the nearby Bürgerpark and 10 minutes from the city center.

Hundertwasser designed several buildings in Austria and Germany, but the Waldspirale is a strong testament to the little sympathy the artist had towards straight lines in favor of smooth, rounded lines and his loyalty to nature. Waldspirale translates as “tree-lined spiral” and that is exactly what it is, a large spiral building topped by a wavy roof in which an incredible forest of beech, maples and lime trees grows. It can be said that the building houses both human beings and trees.

“… If man walks in the midst of nature, then he is the host of nature and must learn to behave like a well-educated guest …”. As a pioneer of modern roofs with vegetation, he commented: “… The grass and vegetation in the city should grow in all horizontal spaces, that is, where rain and snow fall, vegetation should grow, on roads and roads. roofs. ”

The facades were designed by Hundertwasser as an allegory of the strata of the earth, of the sediment that has been deposited for millions of years.

Seen from the outside in the Waldspirale, the personal tastes of its designer, Hundertwasser, are appreciated: the absence of straight lines, since the artist defined them as “tools of the devil”, golden onion domes, multicolored paint on its facade and colorful ceramic columns. The building begins to rise in the southwest corner of the place, a meadow that constantly rises to a final height of 9 floors in the southeast corner where a 12-story tower rises 41 meters providing a unique accent.

The Waldspirale is formed by 110 units of which 105 are apartments, with a facade perforated by 1048 windows of different shapes and sizes that do not follow a line, even some of them are crossed by trees. In its highest part it reaches 12 floors. In total the residential area occupies an area of ​​8,800m2. The building has underground parking.

The U-shaped structure develops around a landscaped inner courtyard with a stream of water and a playground. On its wooded deck the complex has a cafeteria and a bar. On other floors there is a travel agency, a souvenir shop and on the upper floors of the turret, in the southeast corner, there was a restaurant that was closed in 2016. From all these spaces you can see the interior of the building .

The spiral ramps on the roof and around the perimeter make all floors of the building accessible without stairs or elevators. Special molds had to be manufactured to produce the unusual rounded shapes of the structure. These shapes also move to the interiors where the corners between walls and ceilings are rounded in each apartment.

Another of its peculiarities is the unique façade that does not follow a regular grid organization and the placement of the “off-line” windows on the entire surface of the same, some of which are out of service due to the vegetation that covers it.

The facade is based on the concept of transferring the earth strata or sediment lines to the structure. Consequently, brightly colored bands can be found, ranging from white to ocher and red, which extend around the building separated by ceramic bands.

At the time of passing Hundertwasser’s ideas to the construction of the structure, the challenge was to achieve the desired plasticity and design of colors on the facade with its corresponding thermal insulation. Plaster plasters were sought with which the desired structural image could be obtained and molded according to the layers of the earth’s crust. The next step was to give it the appropriate color that would fit the artist’s ideas for which four sample facades were photographed and mailed to New Zealand for Hundertwasser to review and finally approve.

Once the plaster material was approved, irregularities had to be manually adjusted to achieve the shapes of the terrestrial strata. Subsequently it was necessary to find an insulating thermal material that conformed to it. The plates of insulating material were placed under the lintels and rounded with a knife, polished and then covered with the plaster plaster. A real effort since thousands of meters were rounded manually.

This is the first high-rise building built in Germany with recycled concrete, 12,000m3, which conserves large amounts of natural resources such as gravel and sand. The use of recycled concrete was carried out in close collaboration with TU Darmstadt, Institute of Concrete Structures, Prof. Peter Grübl, and is in this respect one of the pioneer projects in the country. Numerous tests were performed to check the properties of recycled concrete, both fresh and once set. The results of the compressive strength in the mixing plant tests show that they all reached their goal or were even better than expected. For the walls, slabs and pillars, a concrete mixture of grade C25 with a settlement flow of 400-420mm was used.

The layers of sedimentary rock beneath the site are expressed on the facade with bands of ceramic tiles and colored stucco. The entire path of the roof is compatible with a garden of maple, beech and lime trees, reaffirming the certainty of its designer in the need to believe in nature: “… The green roofs are the roofs of the future. […] It will be difficult to imagine that there was a time when the roofs were dead, lifeless and without vegetation … “. Friedensreich Hundertwasser.

The 1,048 windows are made of German pine wood.

Capatect LS System non-flammable thermal insulation plates were used, in different thicknesses of between 20 and 200 millimeters that had to be adapted manually to the rounded shapes of the facade and the interior curves of the departments.

On the facade the rough plaster layer was covered with a first layer of paint dyed in a bright base tone. To obtain the iridescent tone of the earth’s crust and general different effects according to the angle of view, mica and iron shavings were mixed that were applied at the base of the still fresh plaster with funnel gun. Subsequently on the rough plaster were applied different layers of dyed paints in different colors.

The complex takes advantage of rainwater for a small pond and watercourse in the garden. 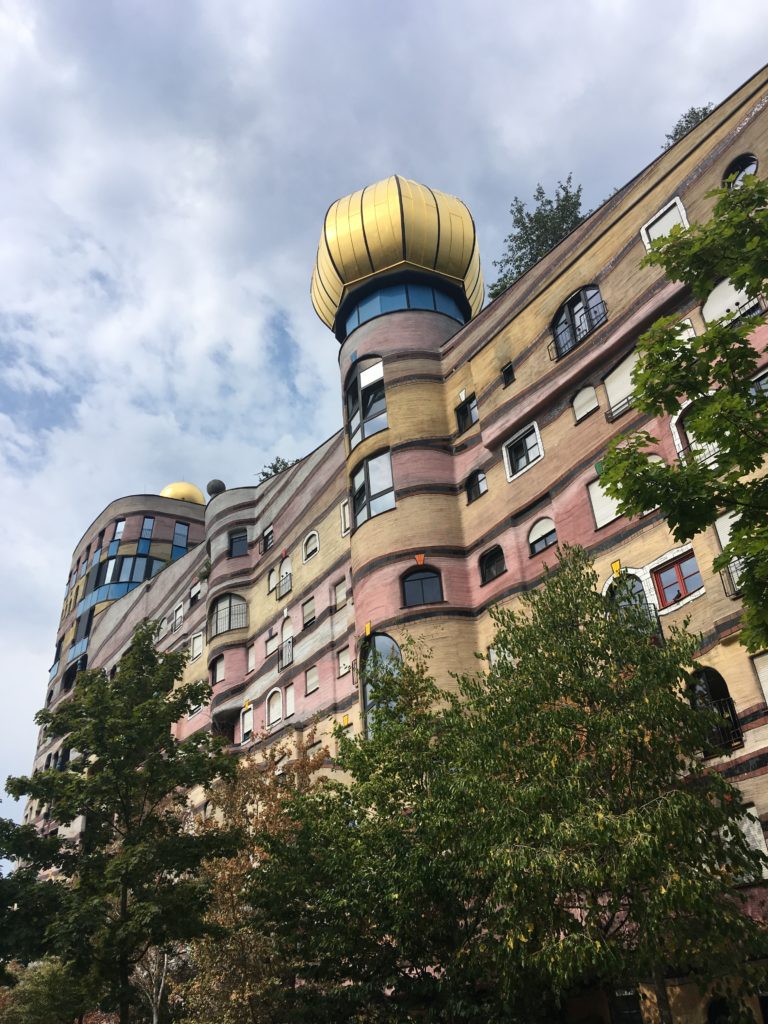 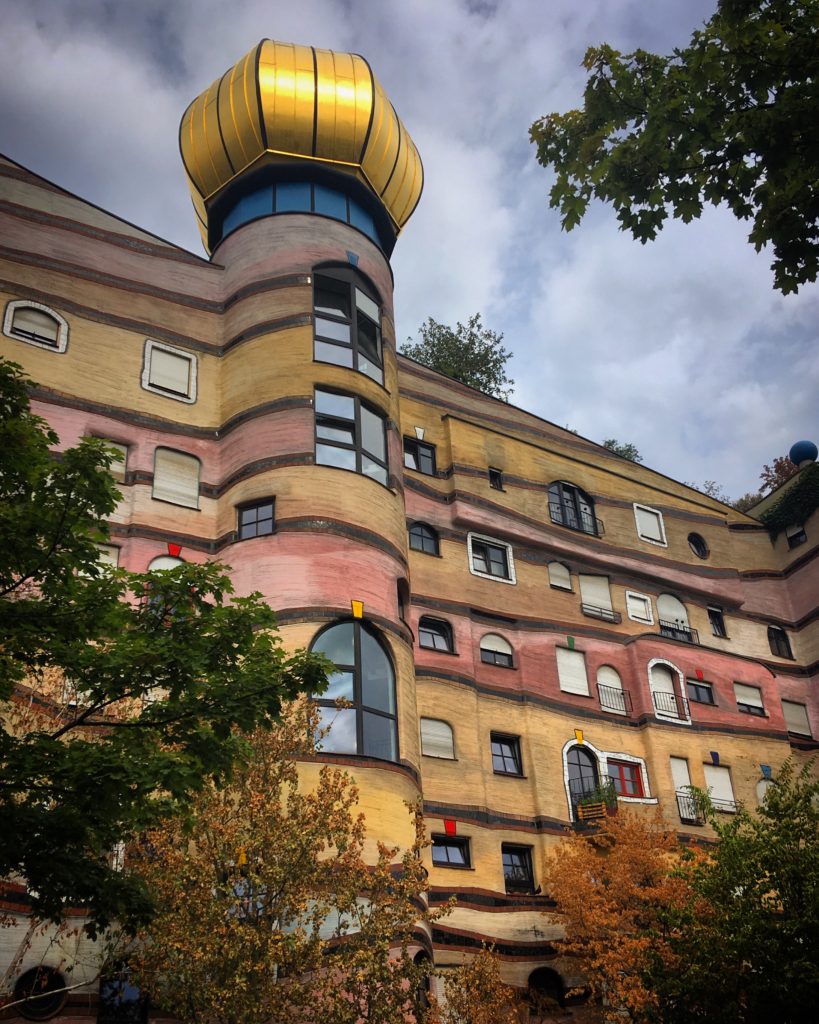 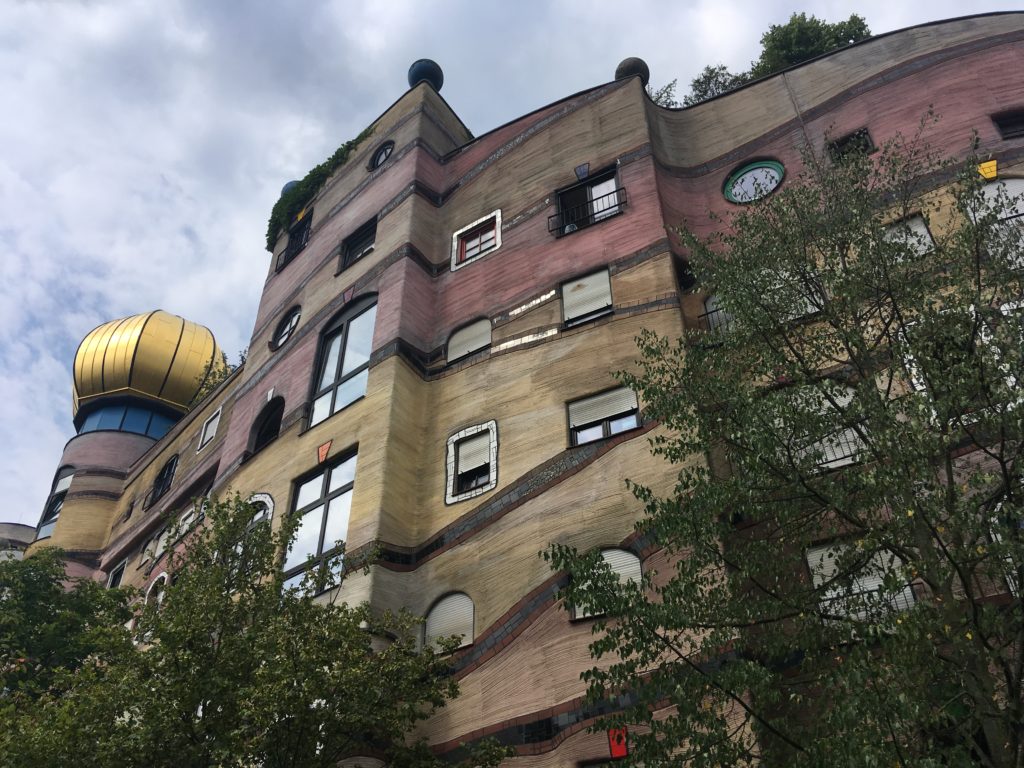 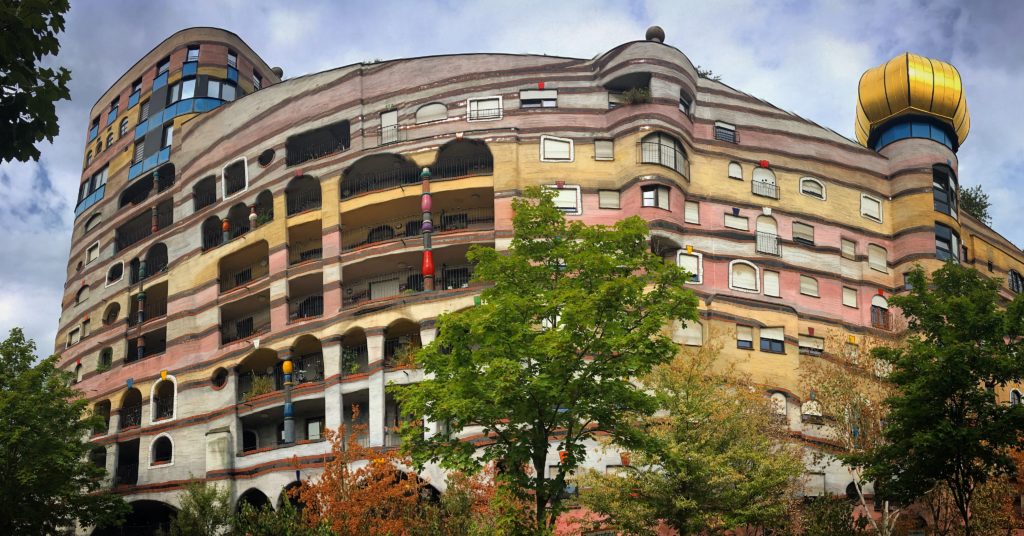 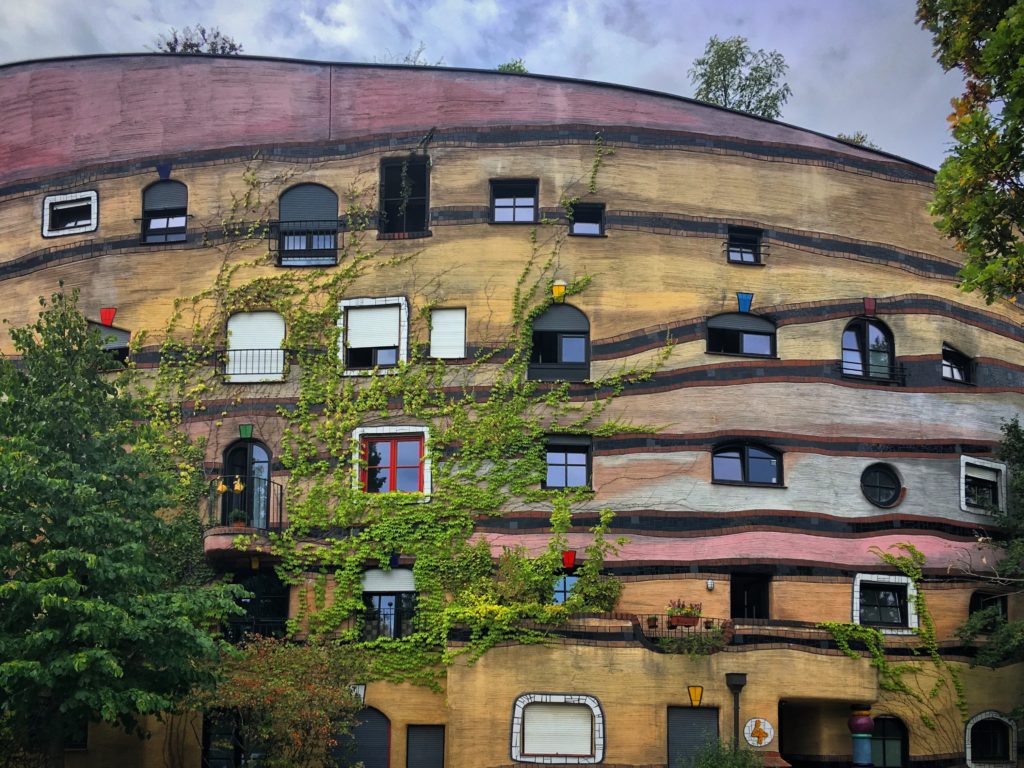 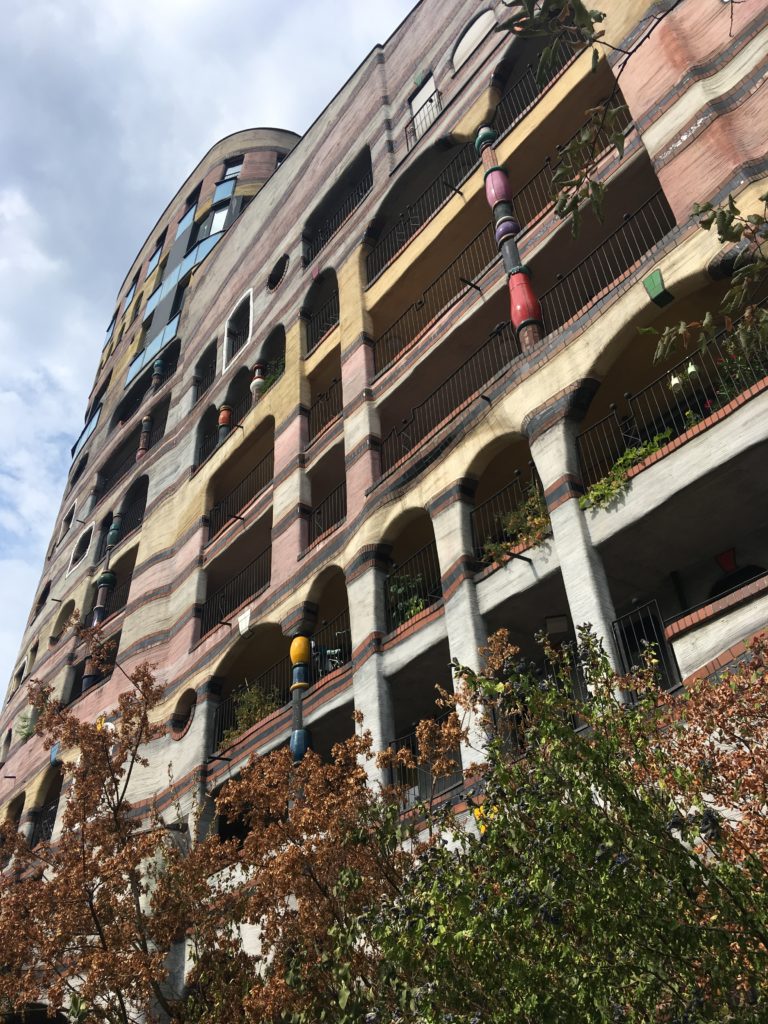 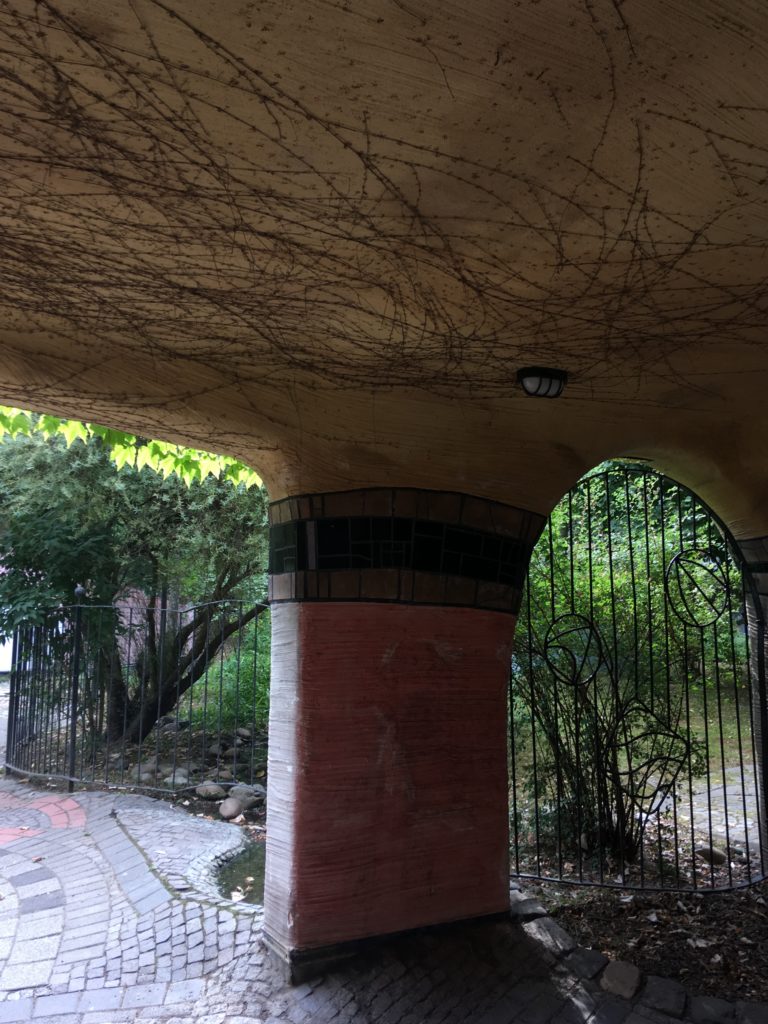 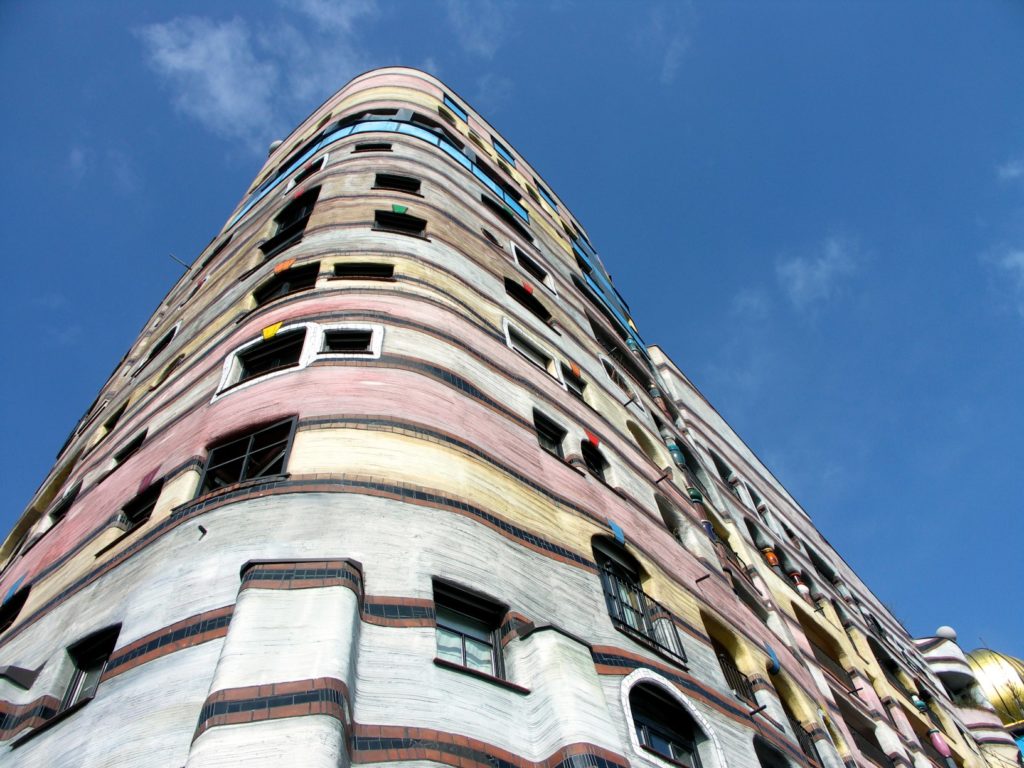 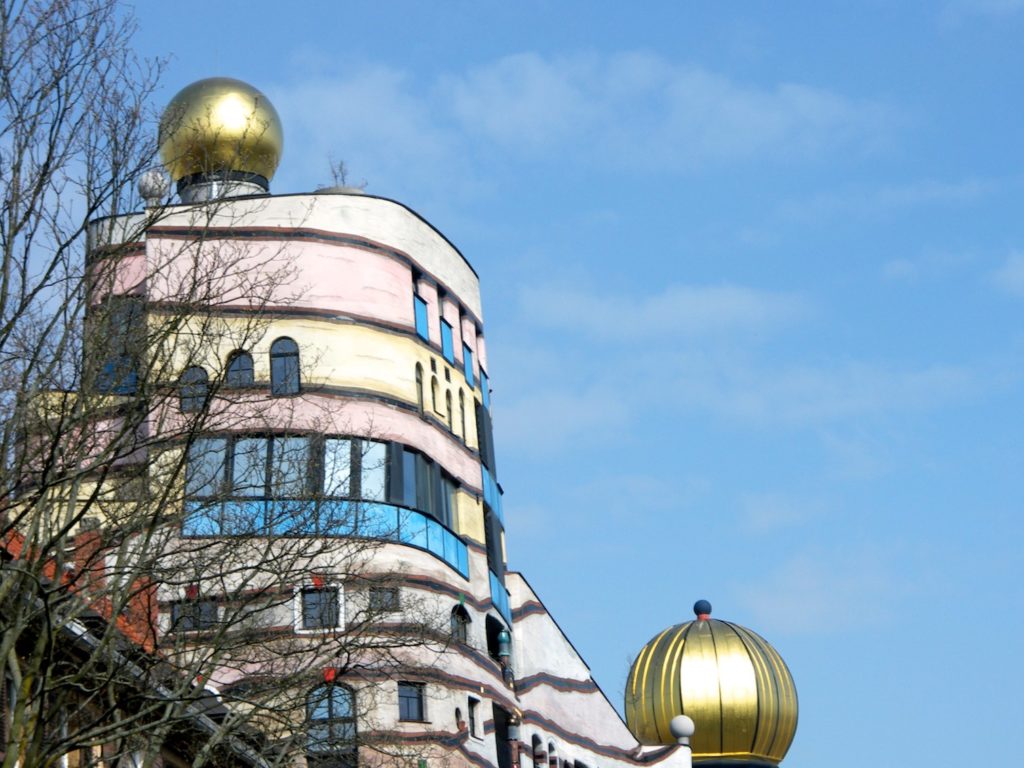 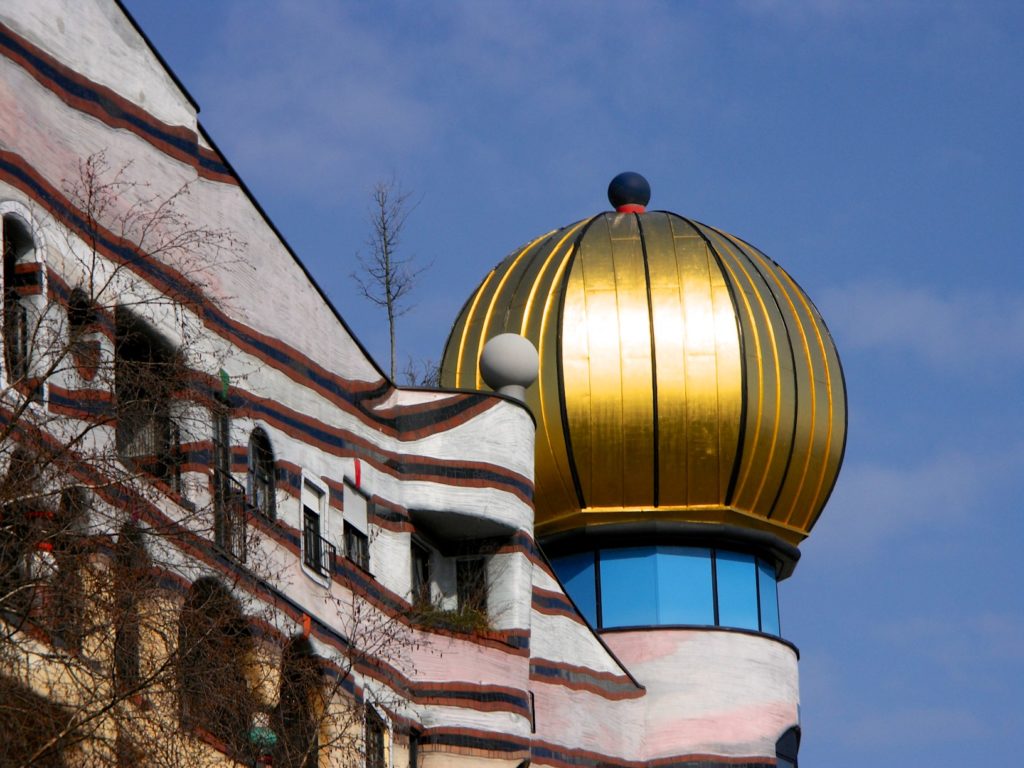 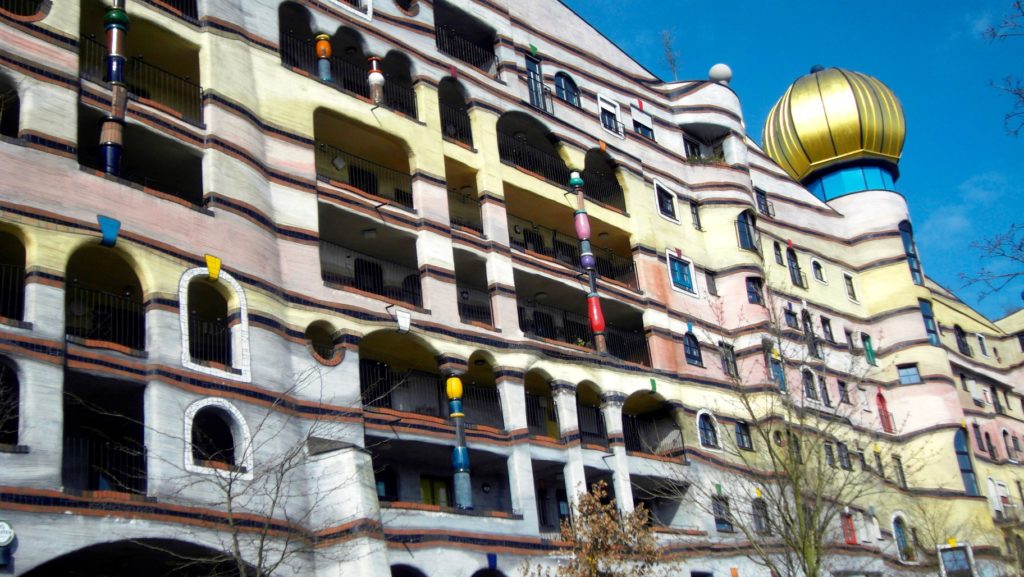 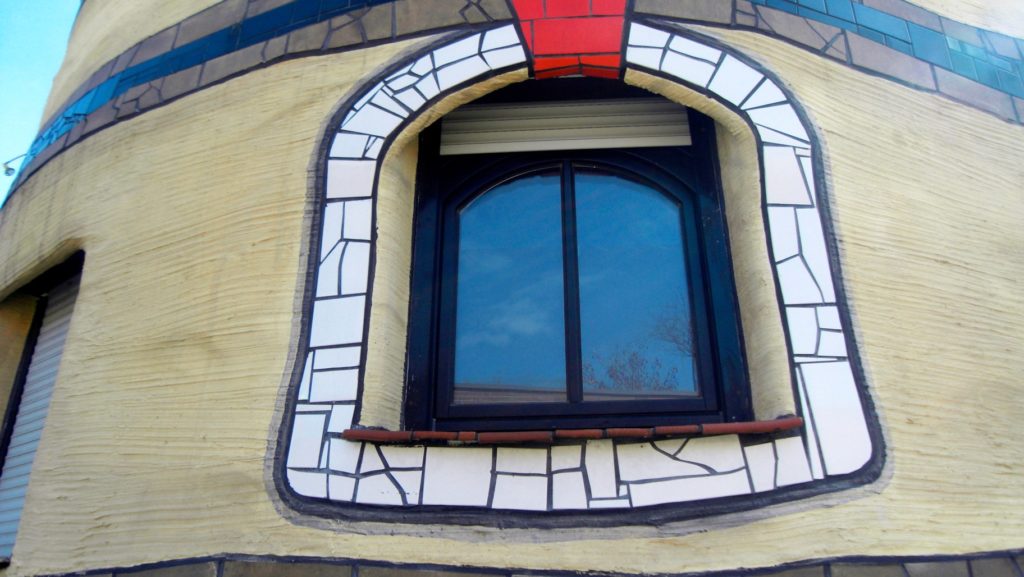 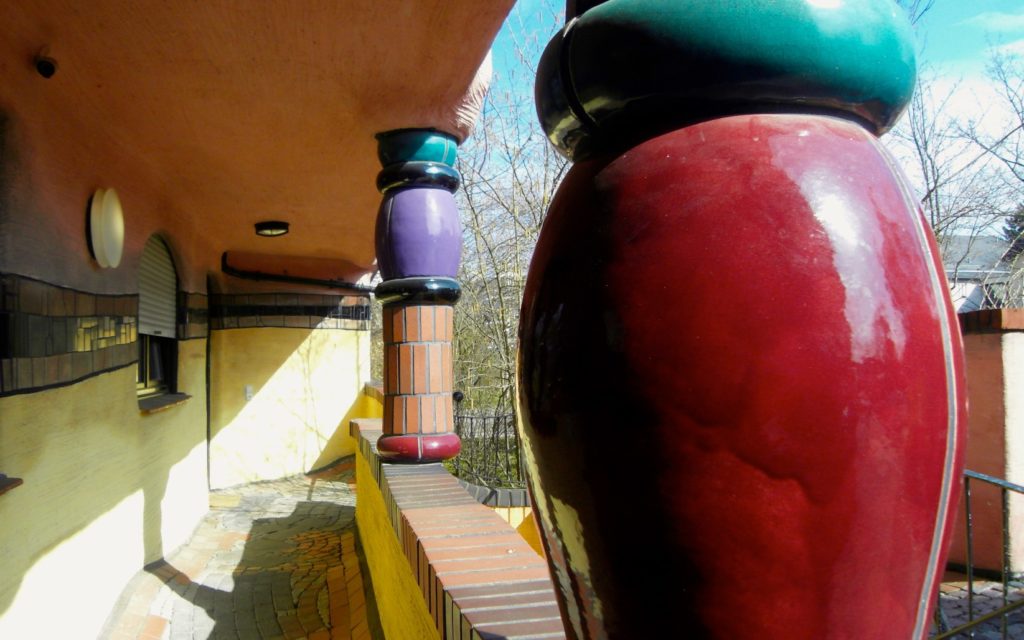 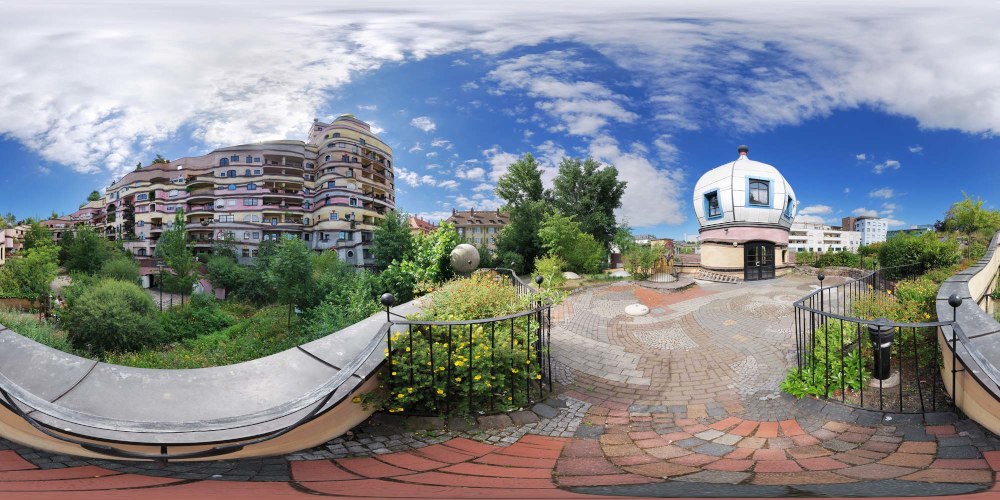 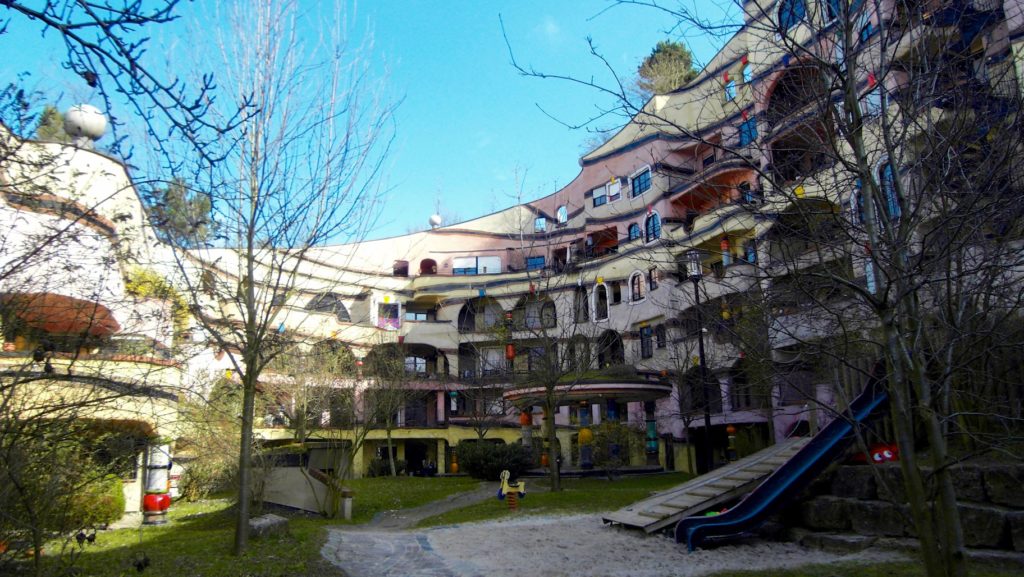 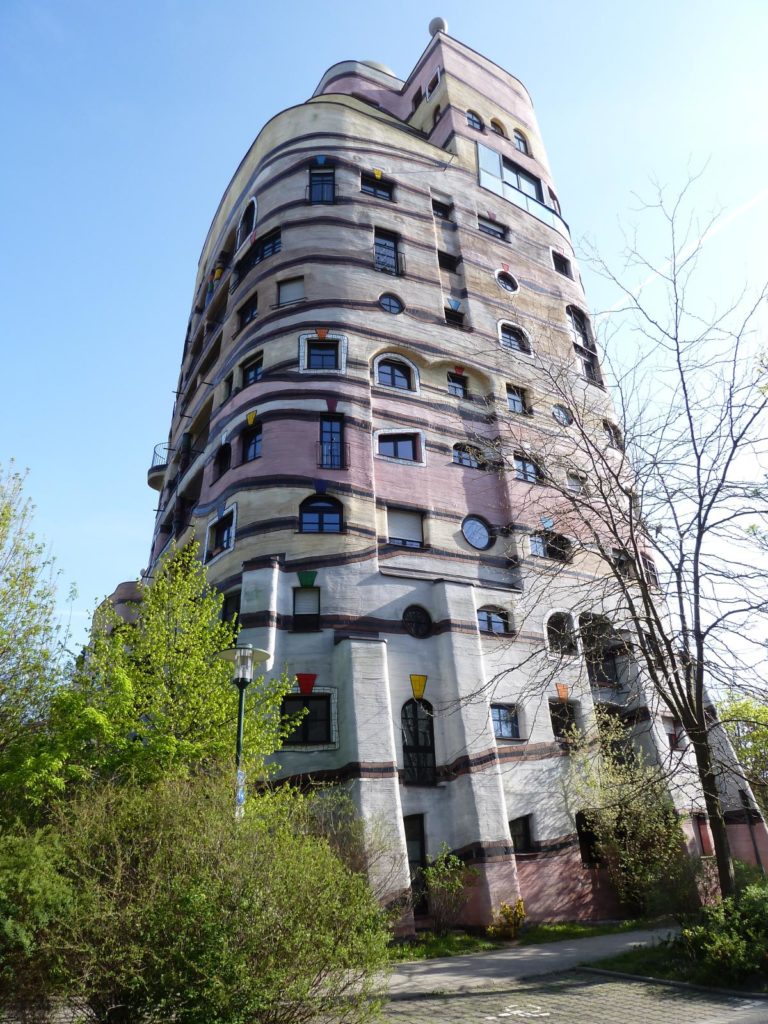 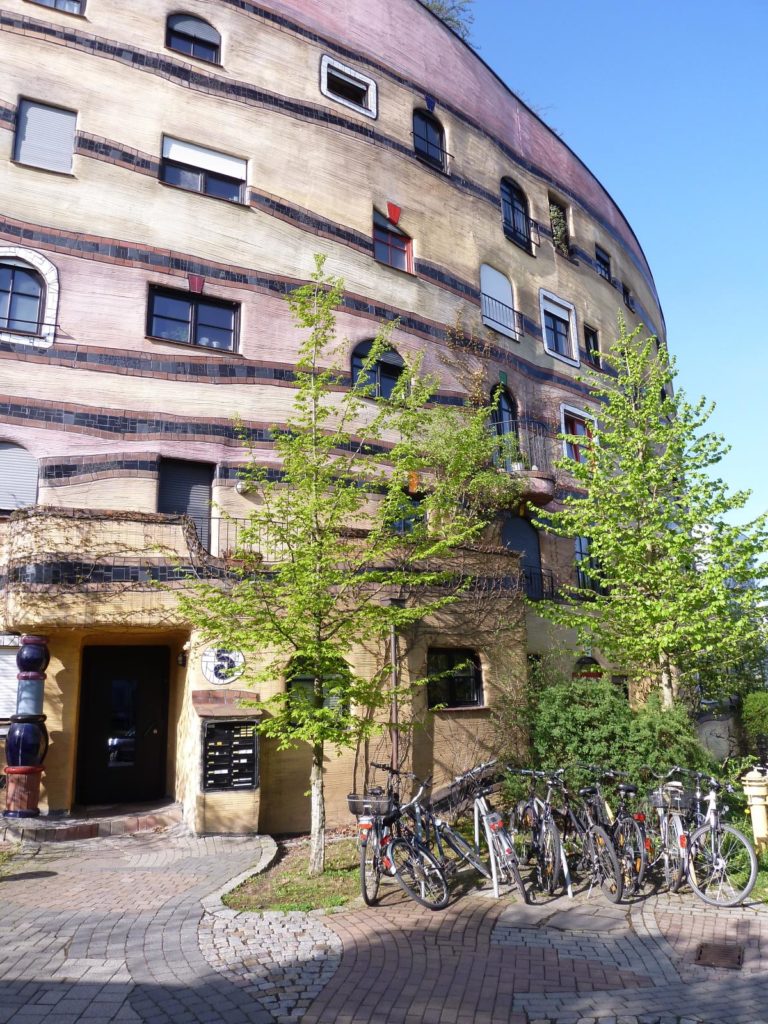 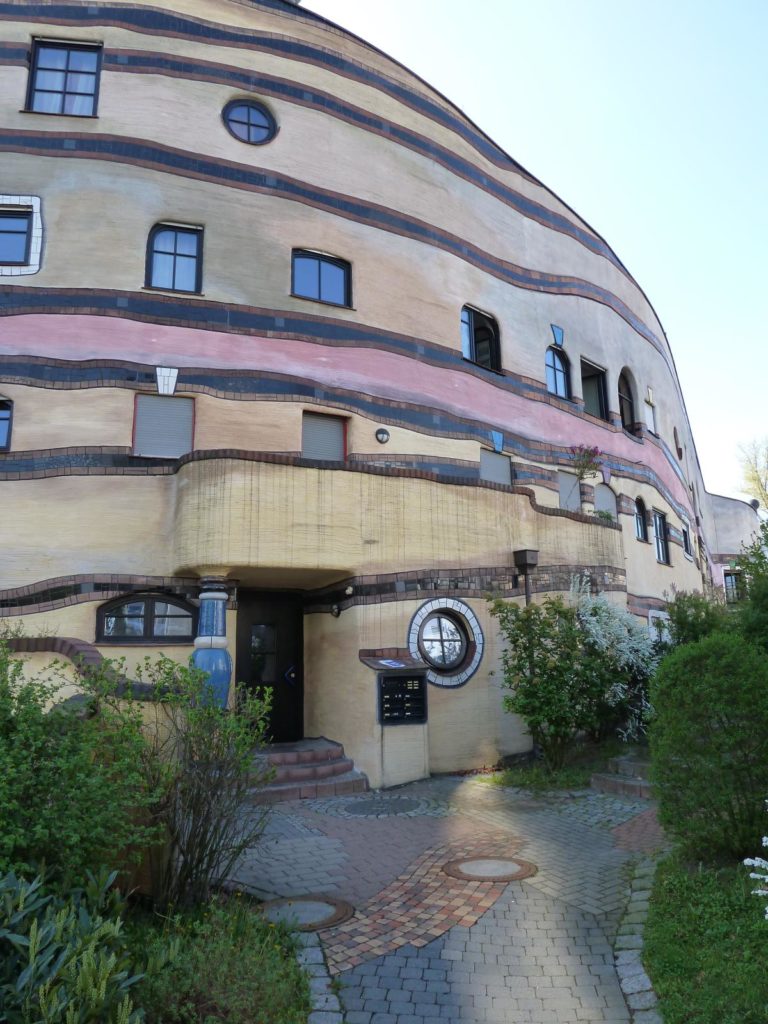 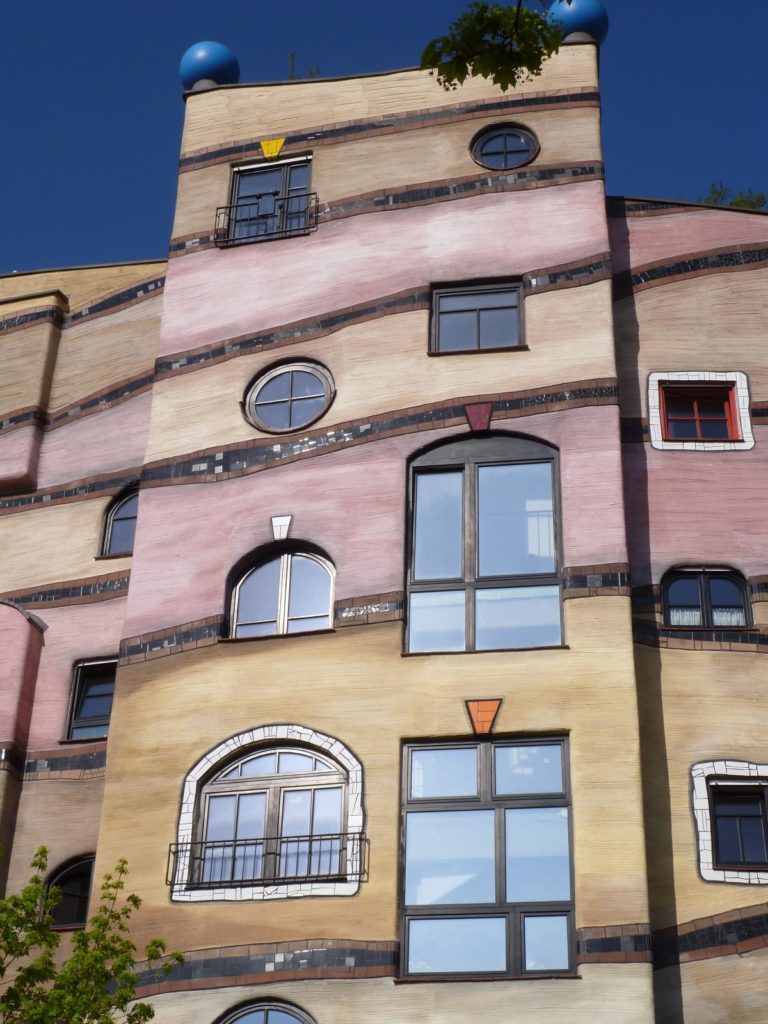 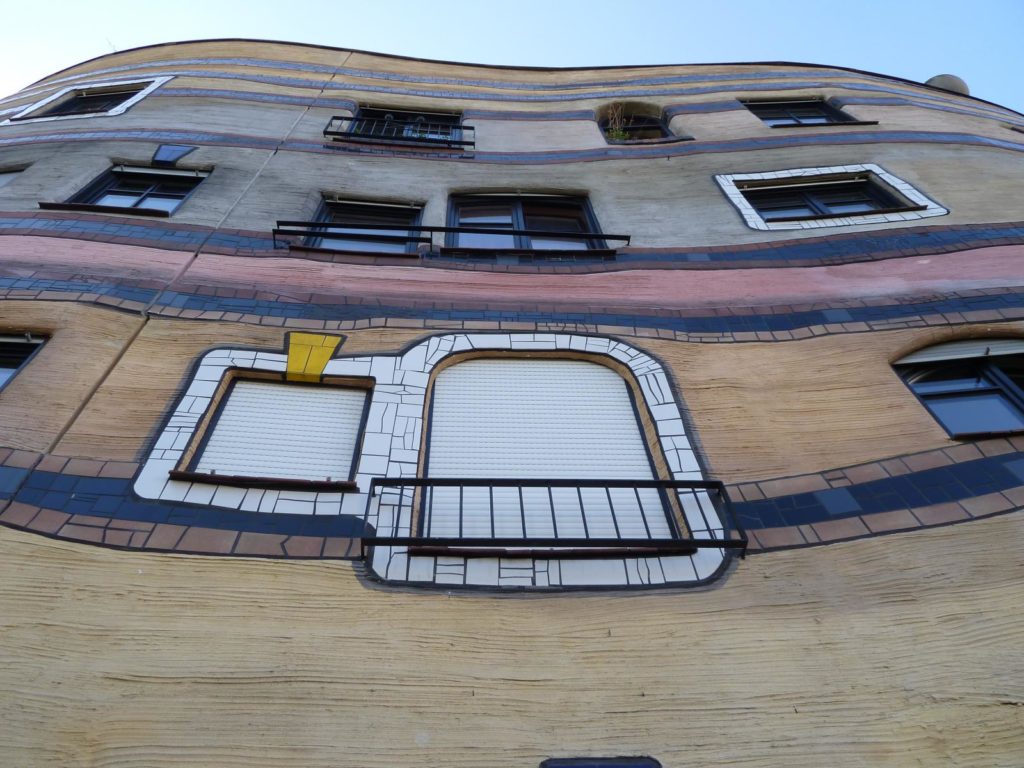 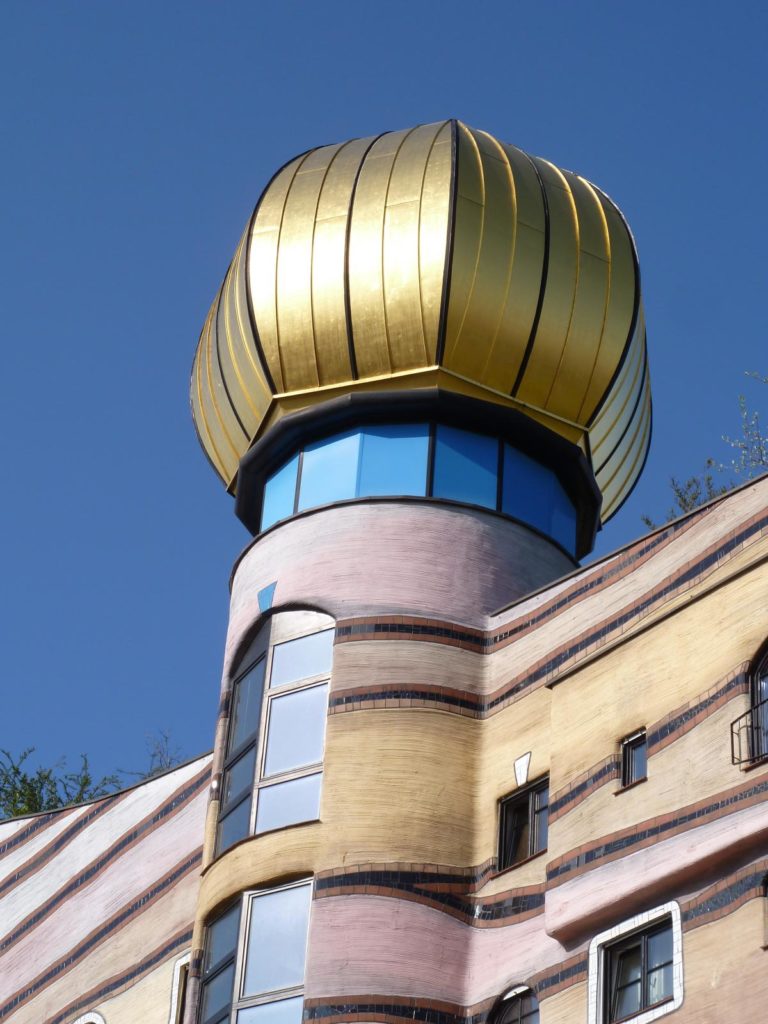 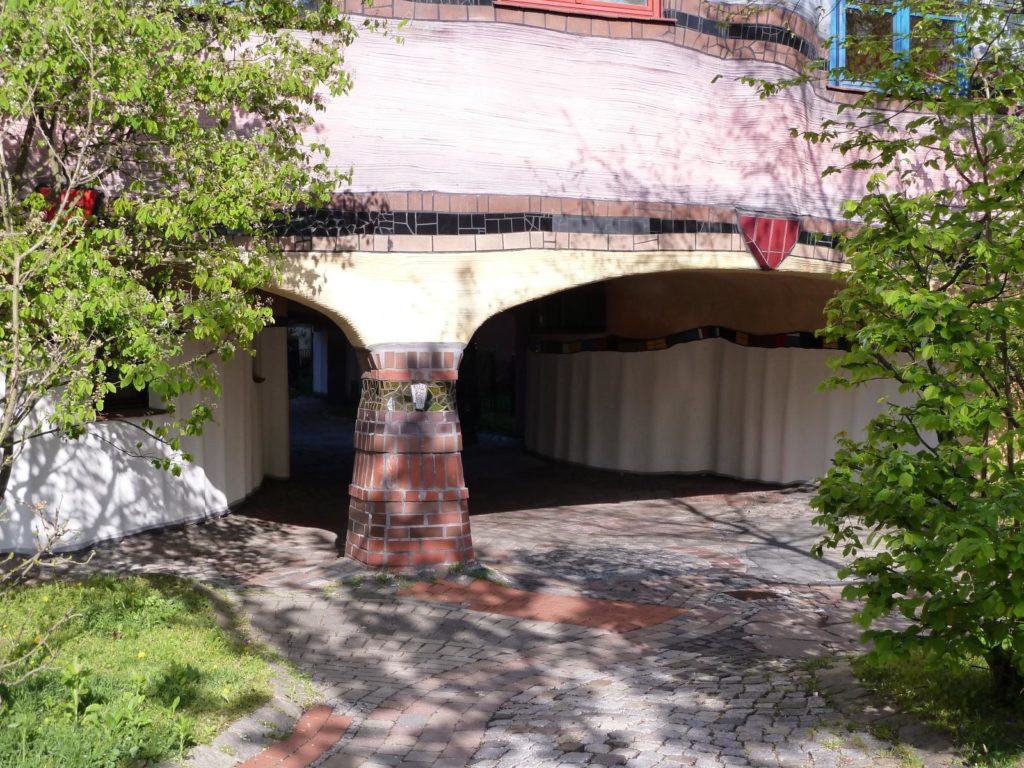 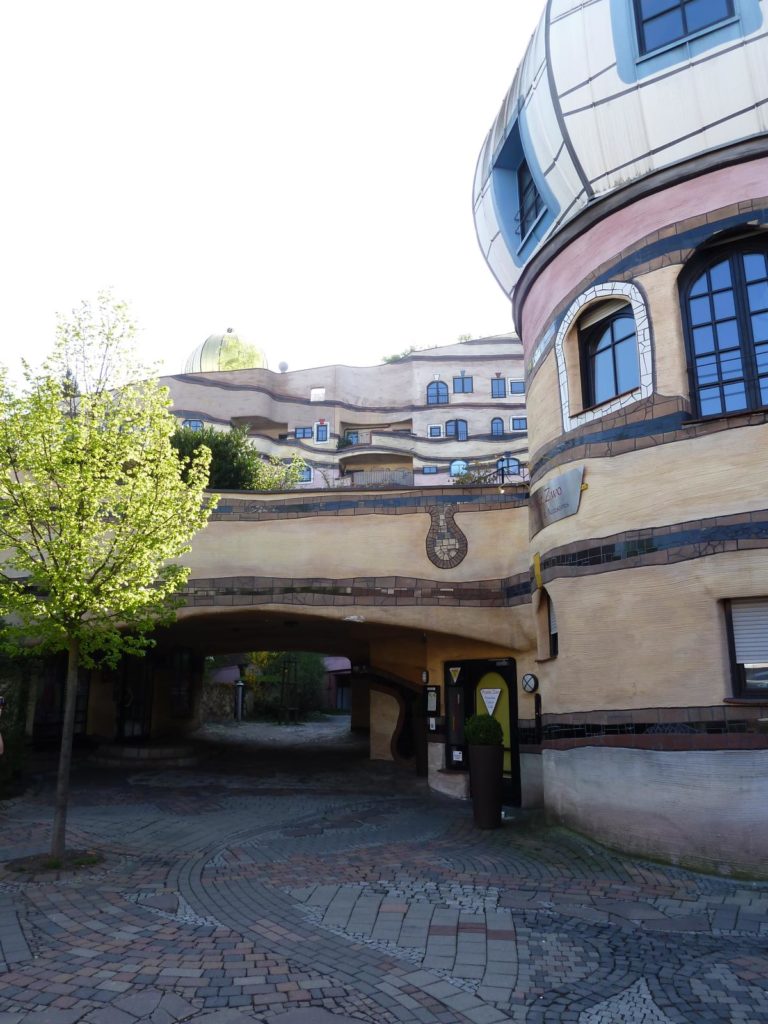 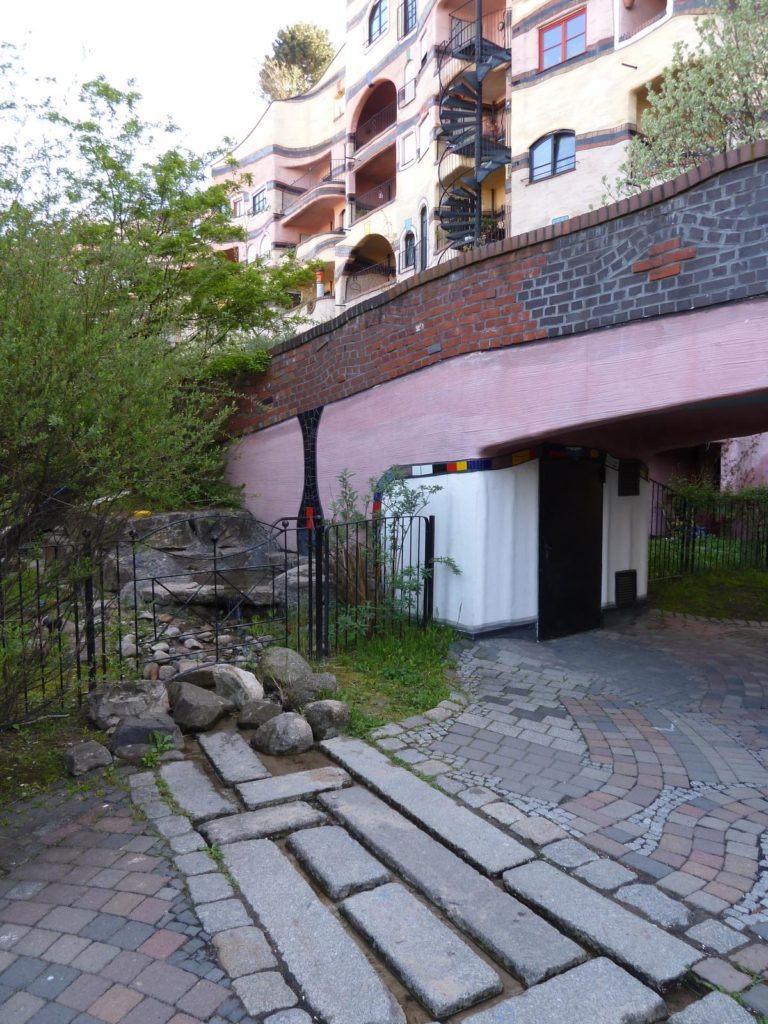 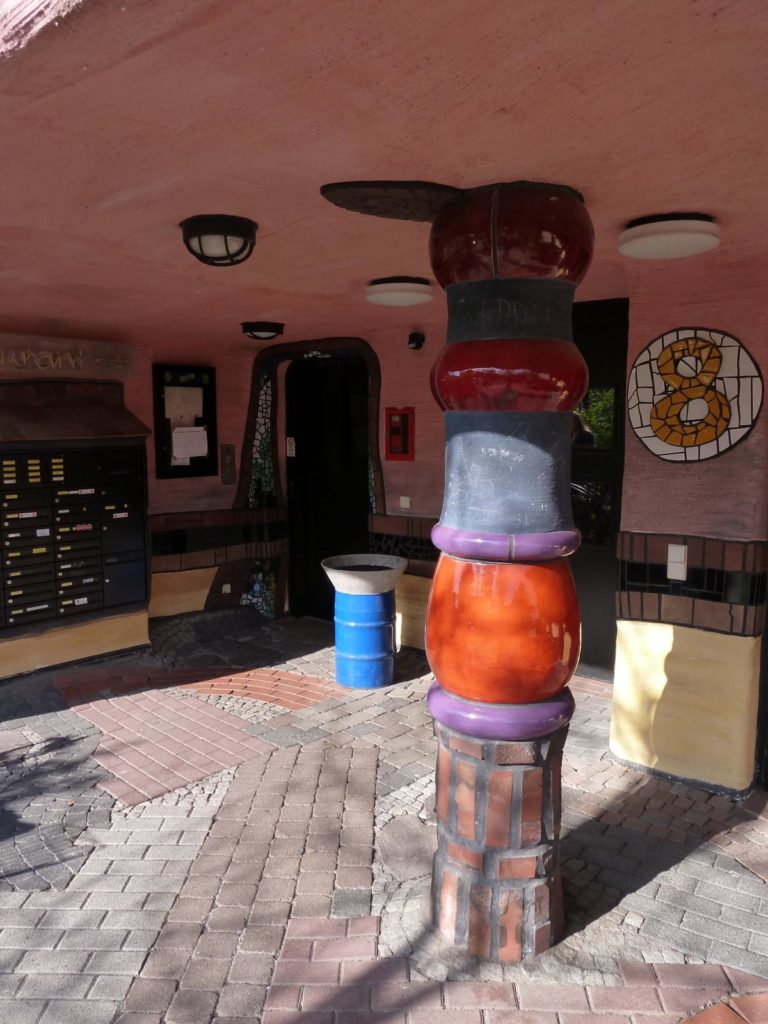 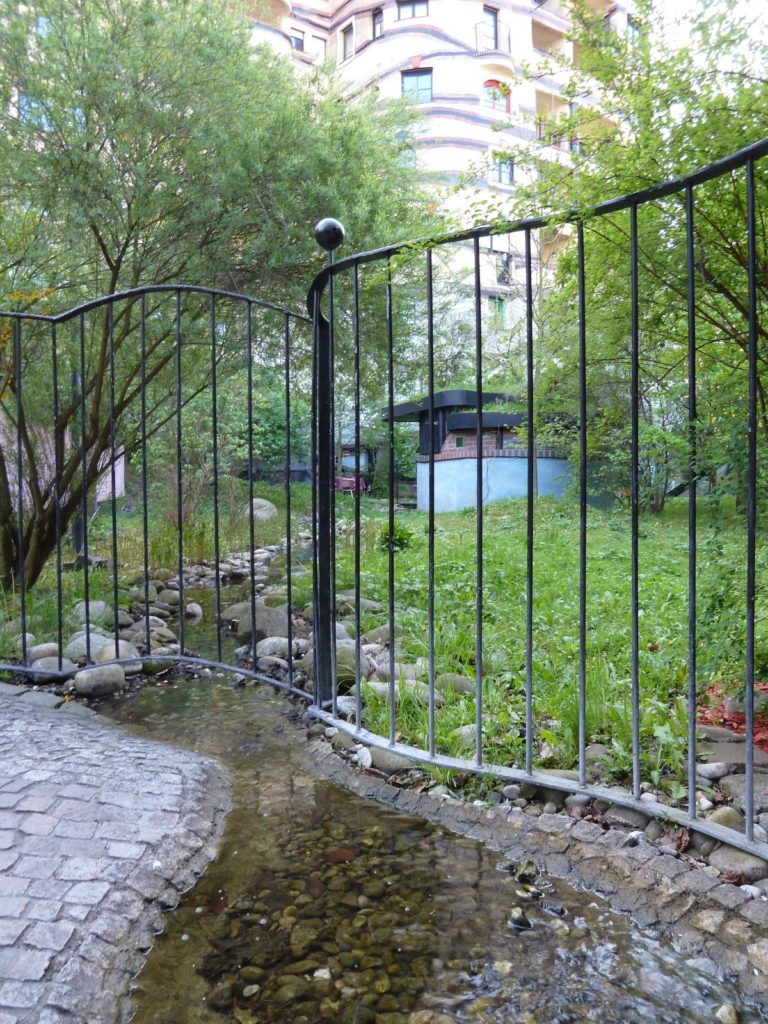 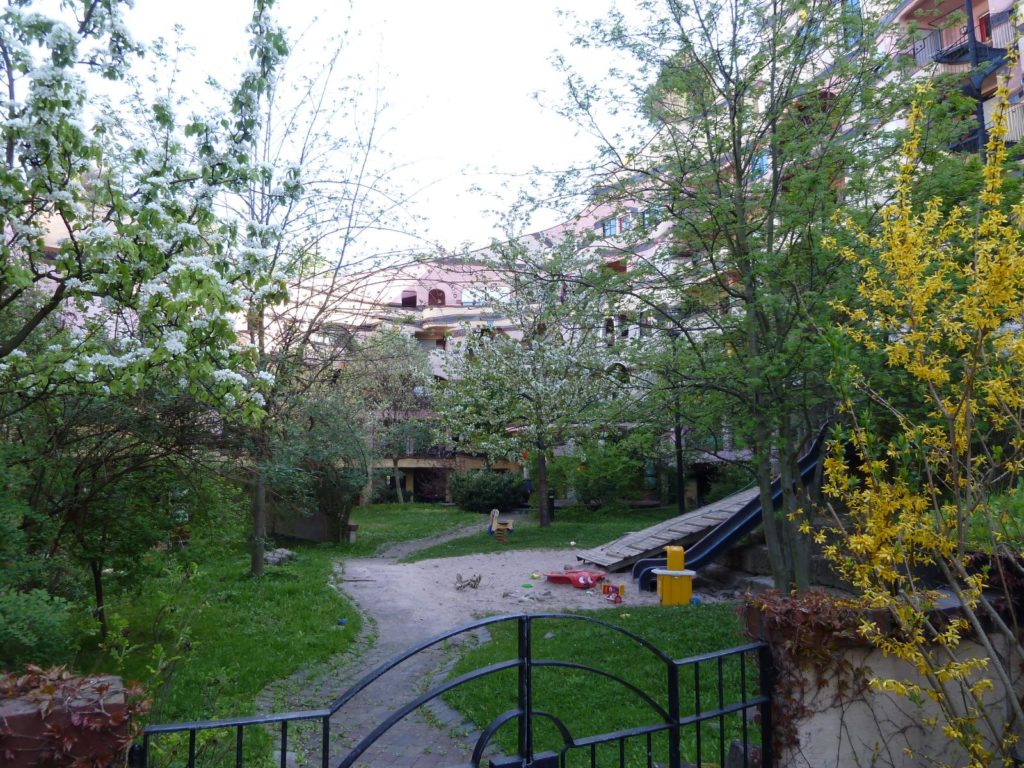