The design stems from the proposal to rebuild the Fort Baker in the department of architecture at the University of California. This was proposed to study students 100A UC Berkeley for three weeks of the summer semester of 2009 Draft a visitor center in the area.

The main theme of the study was to liminality: the importance of transition and reconciliation between spaces and the need to capture and emphasize intangible aspects of the site.

With this intervention was to restore the space while emphasizing the values that have made it a unique place throughout history.

Horseshoe Cove as seen from the Golden Gate

Horseshoe Cove is undoubtedly a privileged location within the Bay area of San Francisco.

Located on the north side of Golden Gate, near the town of Sausalito, protected by a series of hills on its northern side with excellent views over the bay to the south. From Horseshoe Cove is not only one of the best views as important reference sites like Alcatraz or the actual Golden Gate, but also you can see the magnificent skyline of the city of San Francisco and the relentless traffic pleasure craft that occurs in that area of the bay, giving rise to a unique glimpse into the world.

History of the Site

The site has a historical past that can not be pushed aside. The story of a city, or even a country, can be summarized by the steps and transformations that this little place has been suffering.

Ever since the site’s origins as Native Americans settled, they found it a great place to settle; with a mild climate, abundant marine life and natural environment protected from the weather.

In 1866 the U.S. Army acquired the land and between 1901 and 1915 built the 24 buildings that today are known as Fort Baker.
The location was a key point in the defense of the bay during wartime and that was when the army decided to reclaim land from the sea creating a large open area to build their campaigns and house his troops before sailing out to sea.

Between 1933 and 1937 he became one of the basis for building the Golden Gate. As one of the closest points to the bridge from where a boat can sail much of the material were carried by road to Horseshoe Cove and from there loaded onto the huge crane barge responsible for delivering them to their final position on the impressive structure.

In 1973 the site was classified as a historic district of the United States and established that this would be transferred to the national parks of the Golden Gate when the army no longer needs, something that did not happen until 2002.

Today has the ground is just as it left the military topographic level, with a range of mountains whose slopes down towards where it should touch the water. However once at this point there is a large plain with little slope and a wood retaining wall three meters high, which prevents the ocean back to claim the piece of land that it owns.

The strong military remains one of the arms that hug the coastline, but is no longer in use and the time is closed to the public and abandoned.

His excellent qualities have made him install one of the sailing area, building more docks for mooring boats and a building on the very waterfront, and a ramp that juts into the water to get the boats more light to the mainland.

A little late on the line that forms the Piazza and the hillsides, has placed a high standard resort consists of a series of separate buildings and offers visitors the chance to enjoy a full day of activities relaxing (massages, baths, etc.). while sleeping in the complex and a museum designed to provide information on the fauna and flora of the San Francisco Bay.

The plans for the proposed visitor center here has addressed two ways, a more formal and a more metaphorical.

The site in question has a horseshoe shape as its name suggests. For its “back” is protected by mountains and on the other hand “front” is opened to a world of possibilities, views, landscapes, activities, etc..

From the moment the way the site is reminiscent of an ancient Greek theater, semicircular and focused on a particular point where the action happens in this case the bay. And from a formal point of view the building tries to imitate these forms to a smaller scale and adapt to the needs of the program.

That’s why the project acquires a twisted manner, creating a series of concave and convex space, intended to house some relaxing activities and make people feel protected, others are open to the breathtaking landscape and invite not only the contemplation but also to research and contact with the natural environment.

The building stands directly on the coastline. In fact some of it is over water. This forces the transition between land and water should be treated. In this case, the whole building is meant as a transition from its input by one of its points at ground level until the opposite end is submerged in the water and disappears.

This gap between the ends of the building along with its sinuous shape in plan reminiscent of some kind of reptile out of the water and it is this concept that ended up shaping and skin section of the building.

The program that should fit was relatively simple: A gift shop, cafe and toilets accessible to both building users and visitors who do not wish to enter it or come to the place when this is closed.

All mandatory program developed on the semi circular “the building that sits on land.
The entrance is by the end of the building and through the gift shop. From here the trail narrows due to the placement of core services and creating a gallery which in turn serves to explain the history of the place through panels. Po Finally we reached the cafeteria area that has all the space “inside” generated by the semi-circular shape of the building and outdoor terrace.

Continuing the tour we went outside and above the water and find an observation deck. It is this same deck that gradually divided into several bands with different slopes which create a form of degree (as in the Greek theaters) that will gradually dipping.

The structure is precast concrete in the shape of the section of the building. These pieces are putting some distance between itself generating the skeleton upon which is affixed to the skin.

For its part the area is situated on the water is held by prefabricated reinforced concrete pillars in a “V” and circular cross section.

The whole structure is formed based on prefabricated concrete parts.

Both the stands as the observation deck are covered with teak wood slats continuously.

Steel columns support the glass that sits along the entire inside of the semicircle by four-point supports at the corners.

The concrete ribs are coated with resin chips of a square shape with chamfered corners in the blue-green tones. 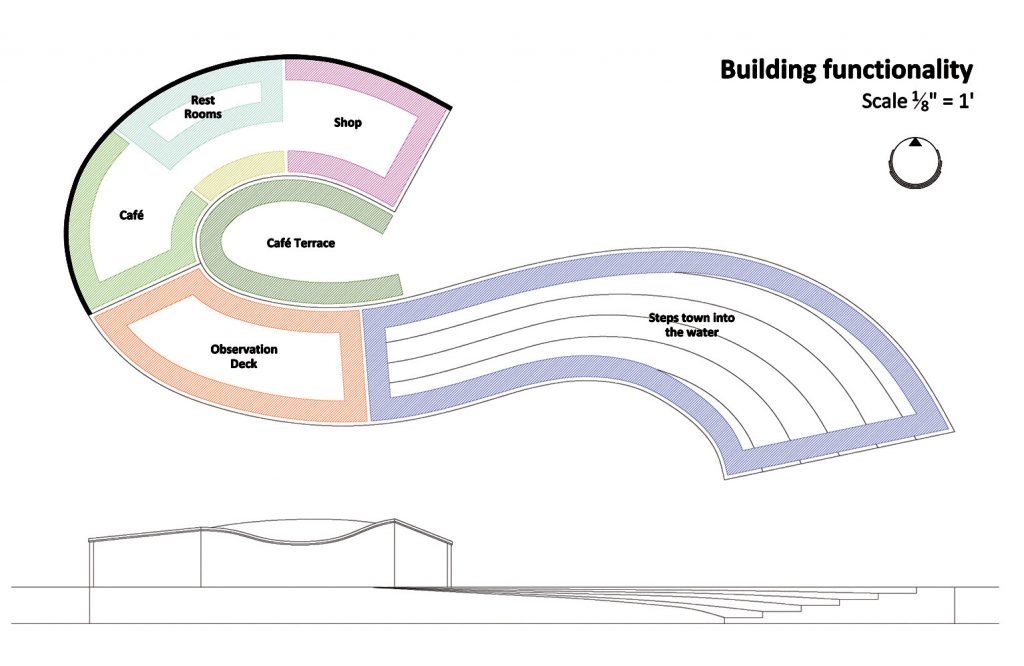 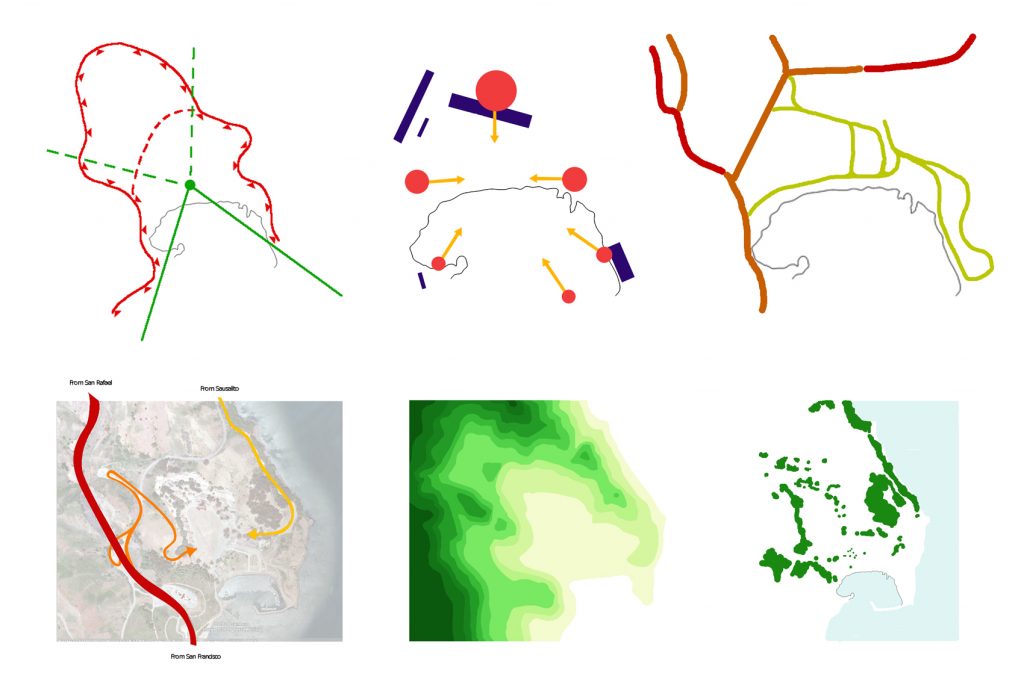 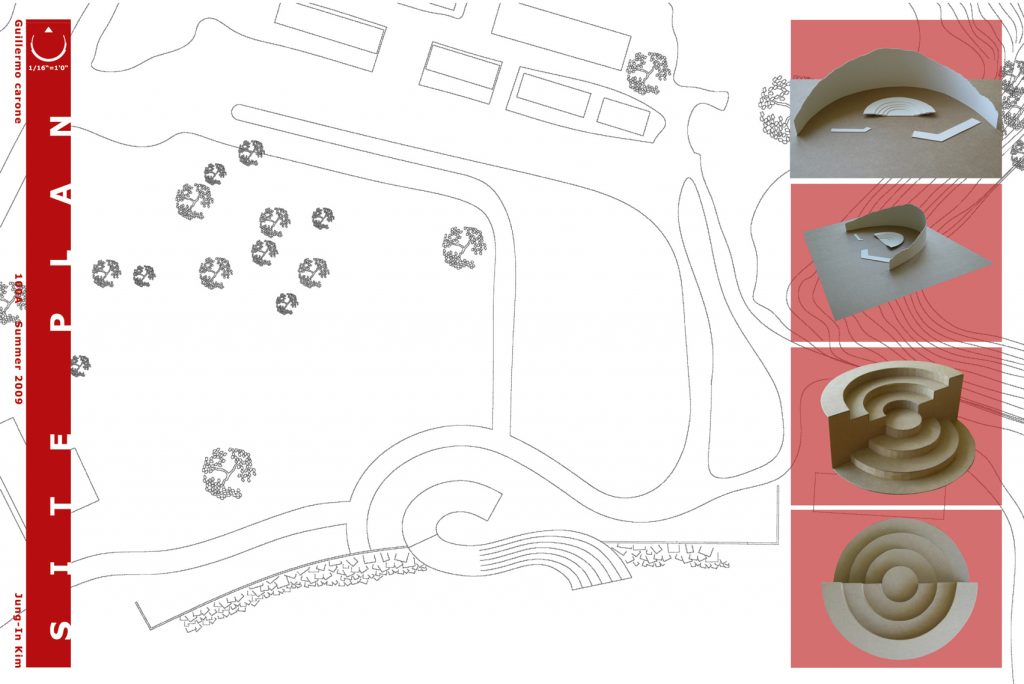 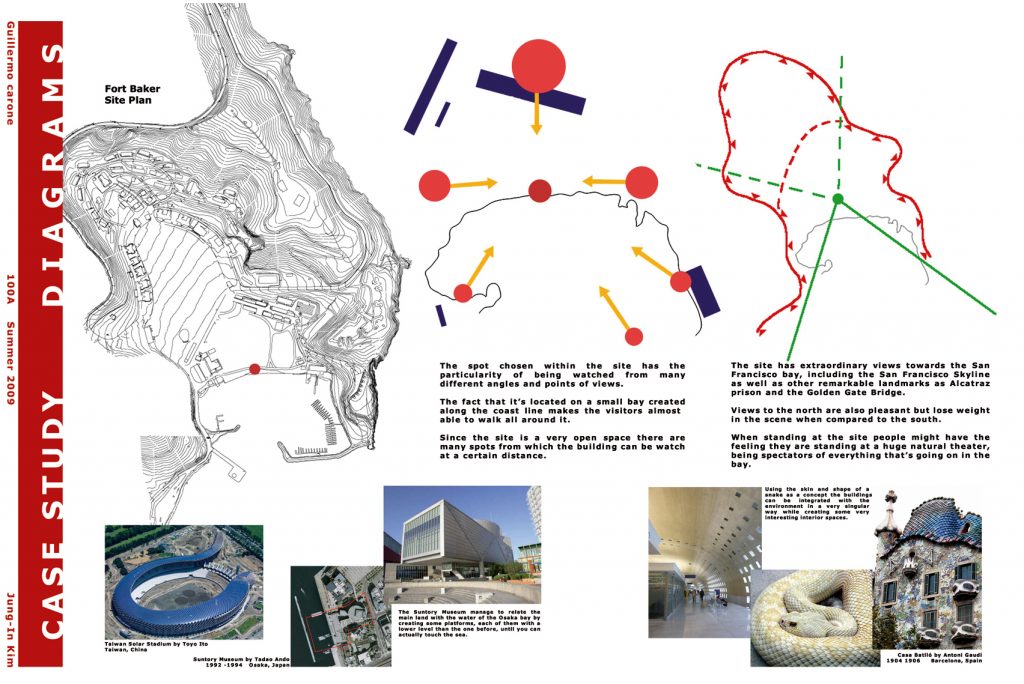 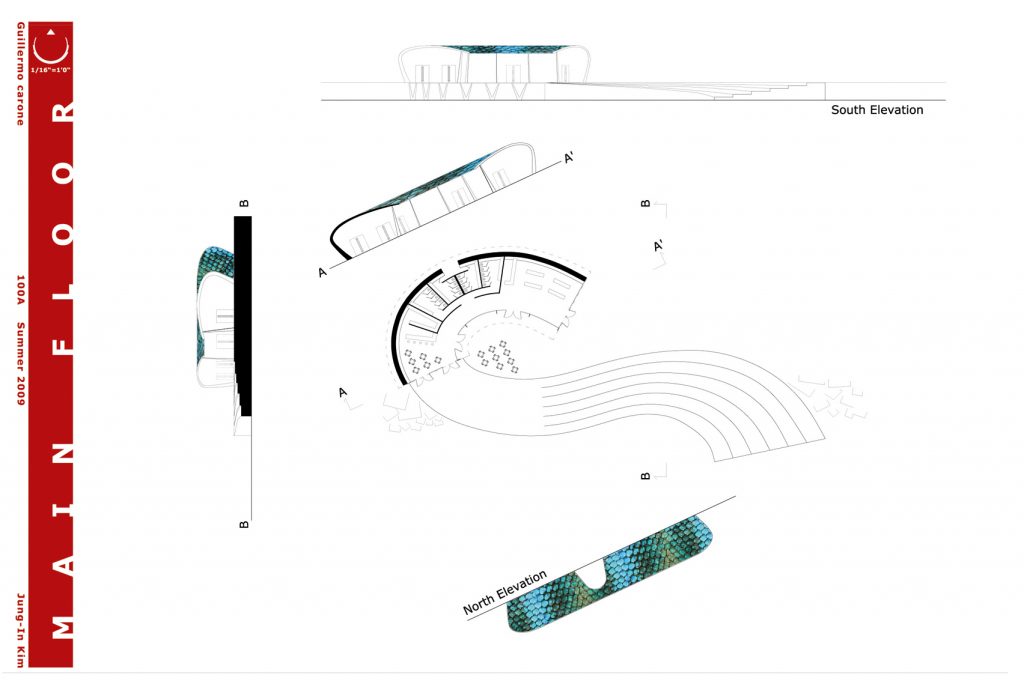 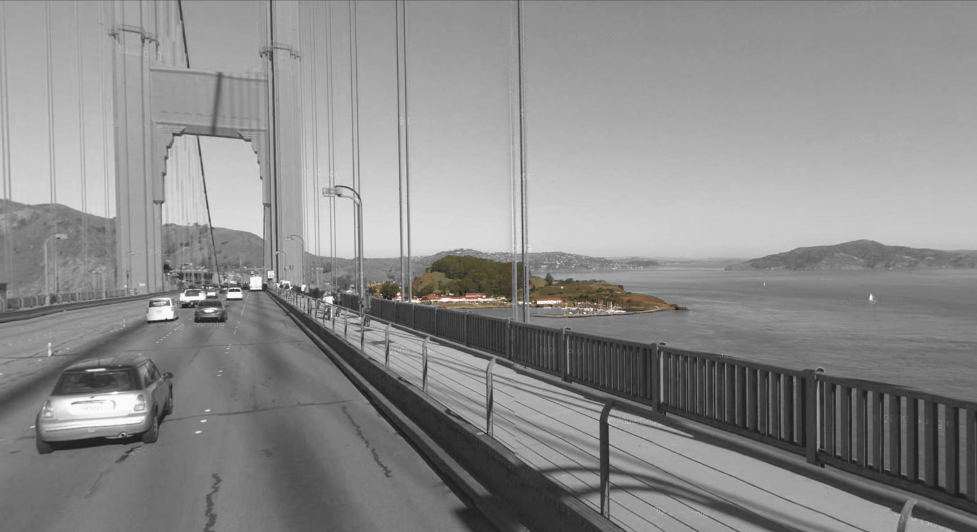 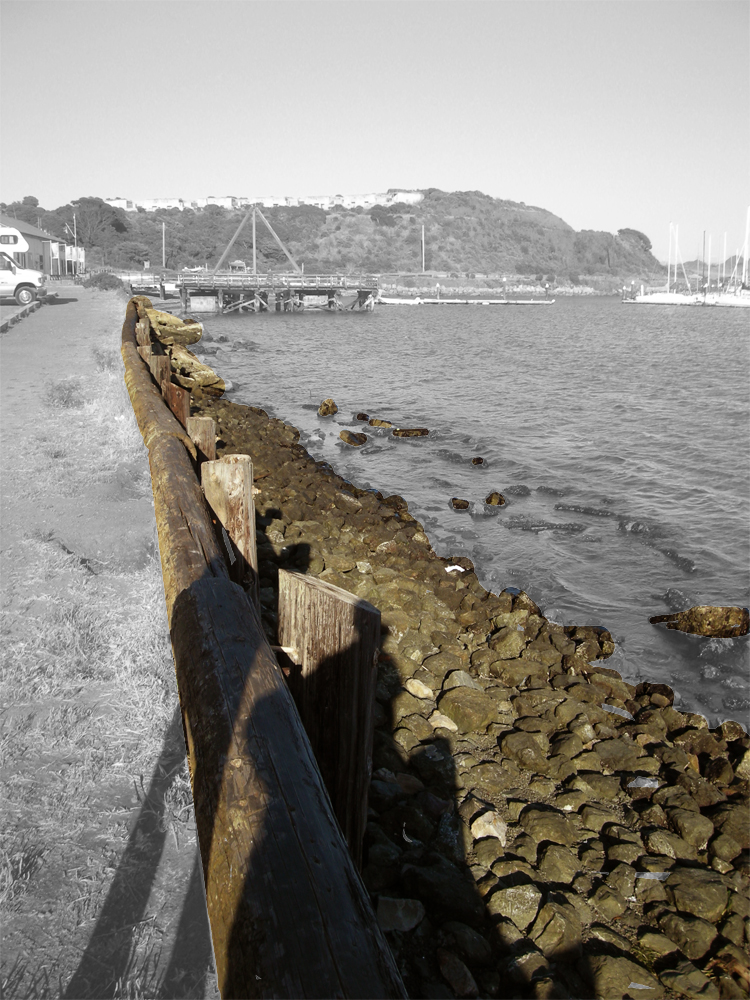 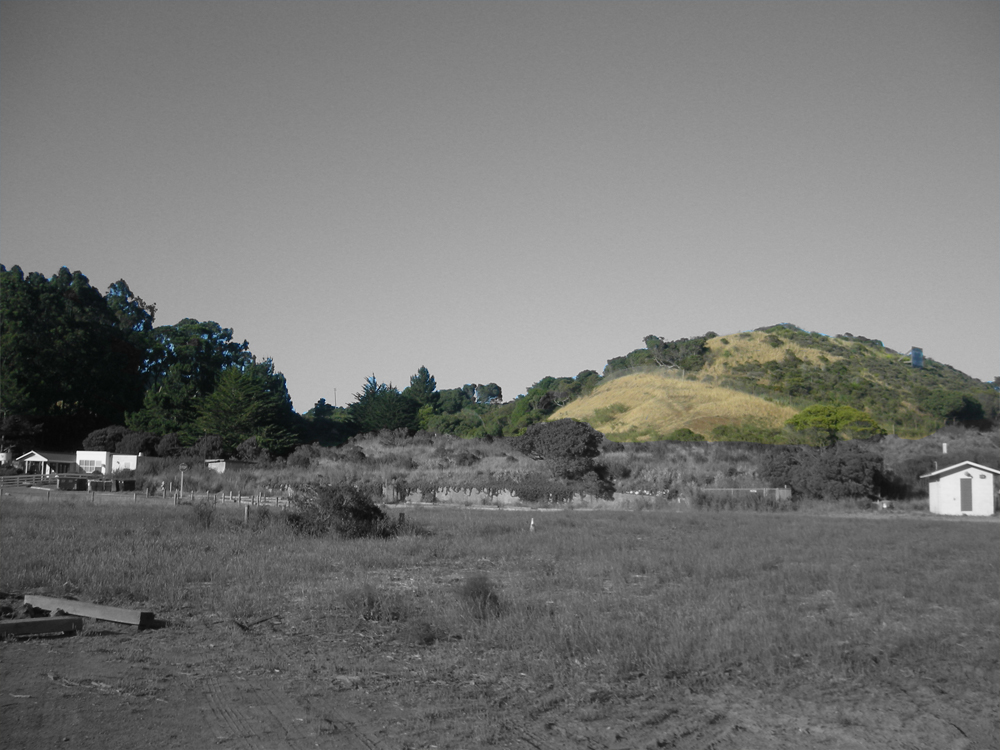 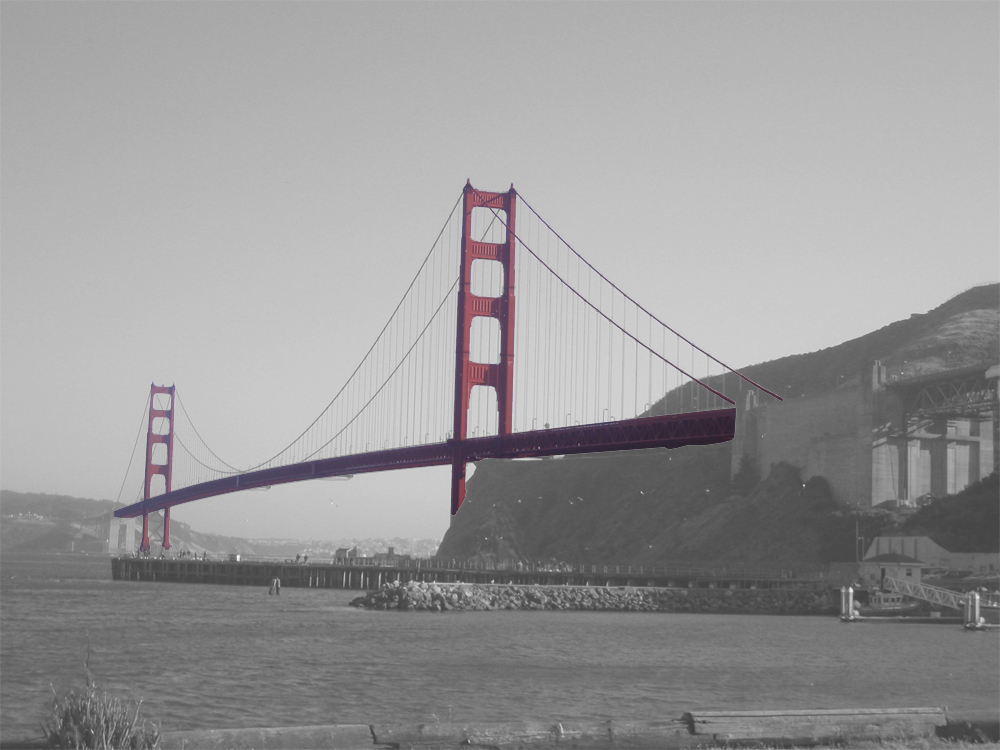 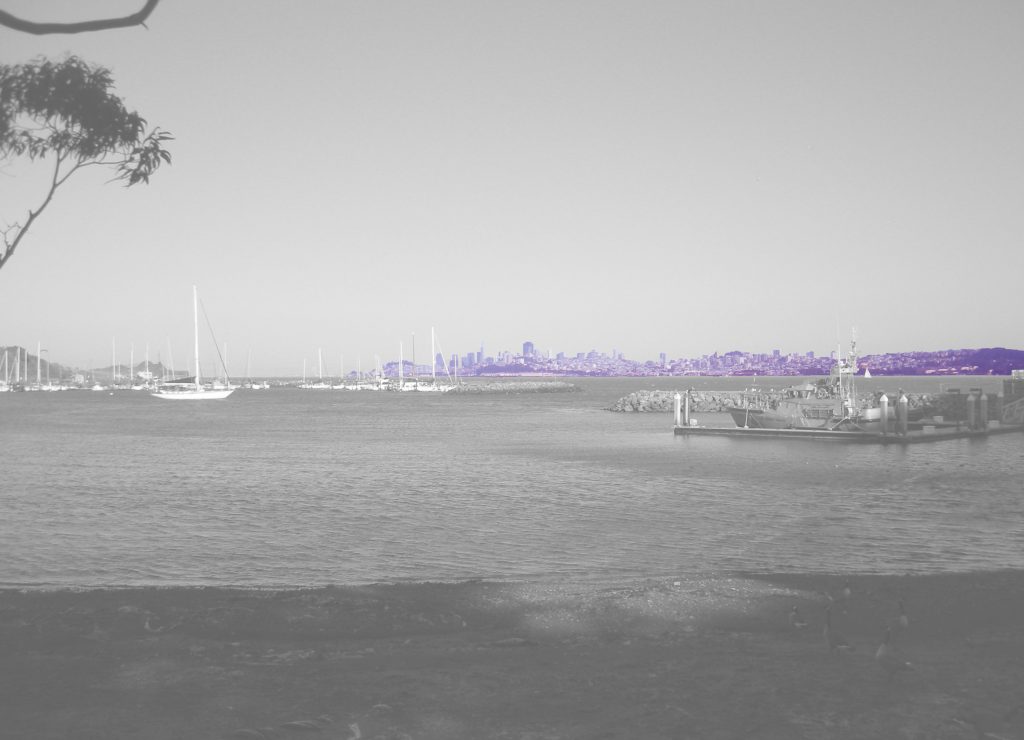 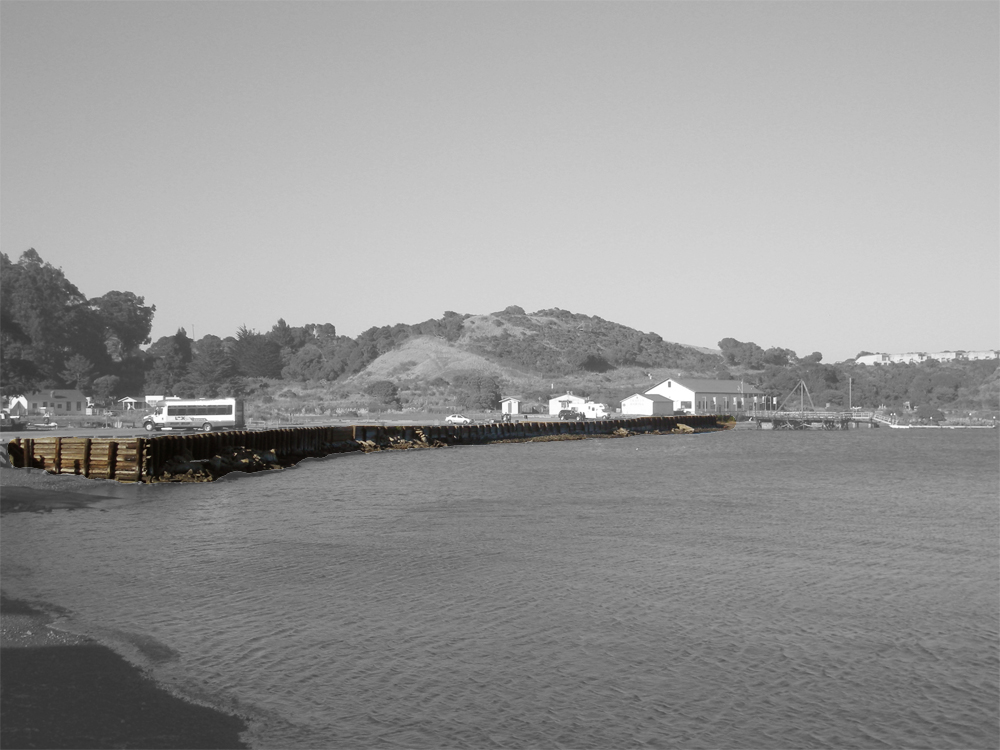 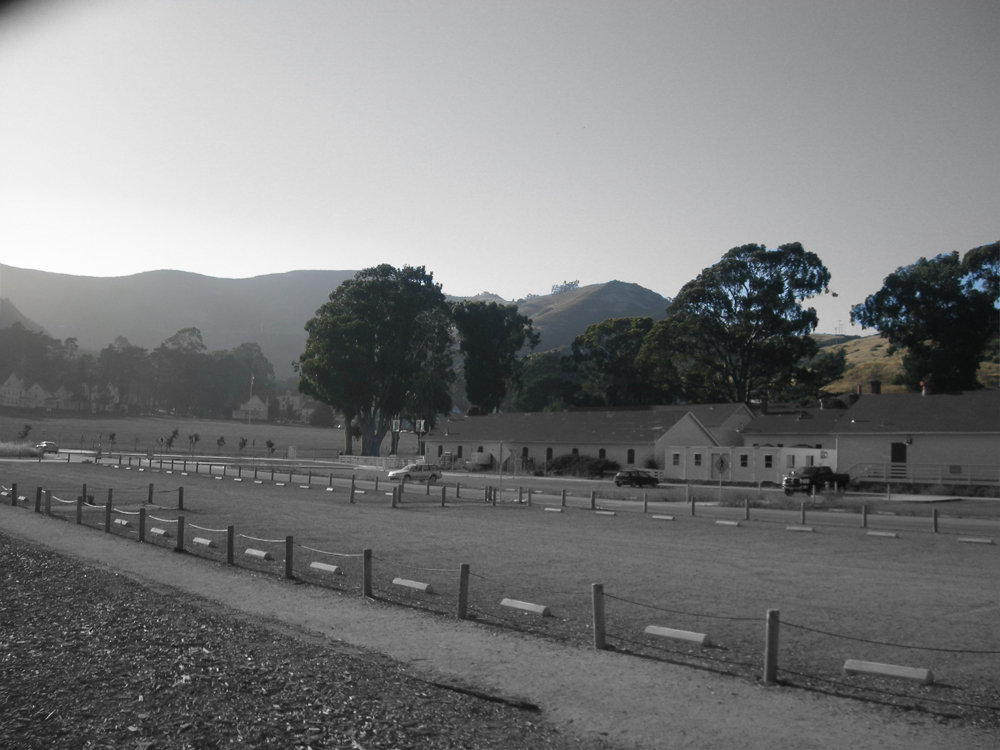 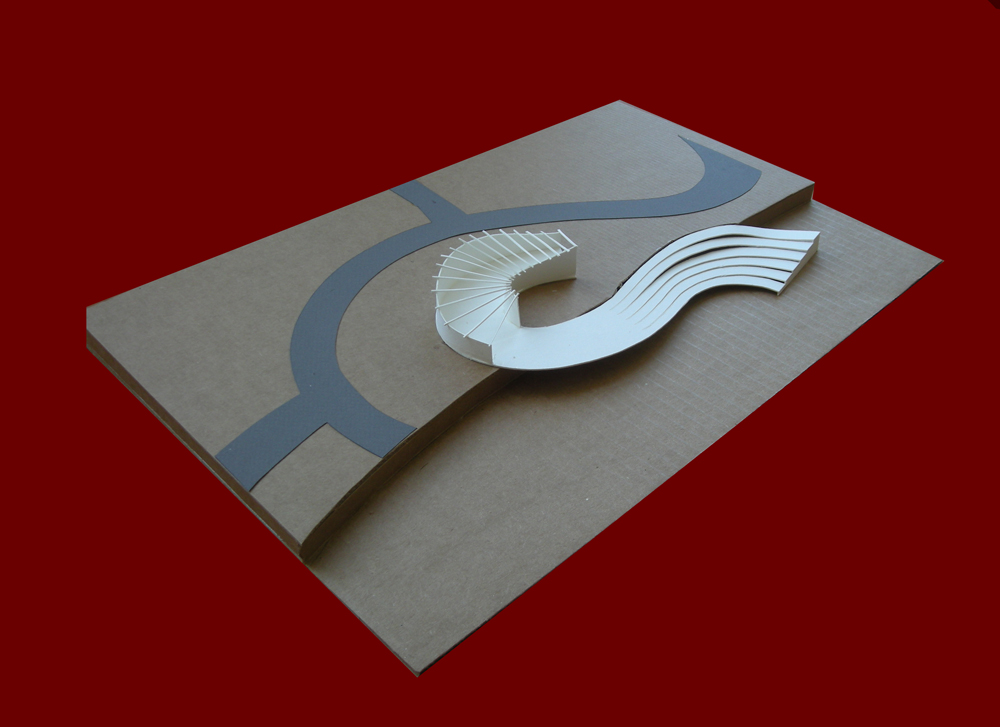 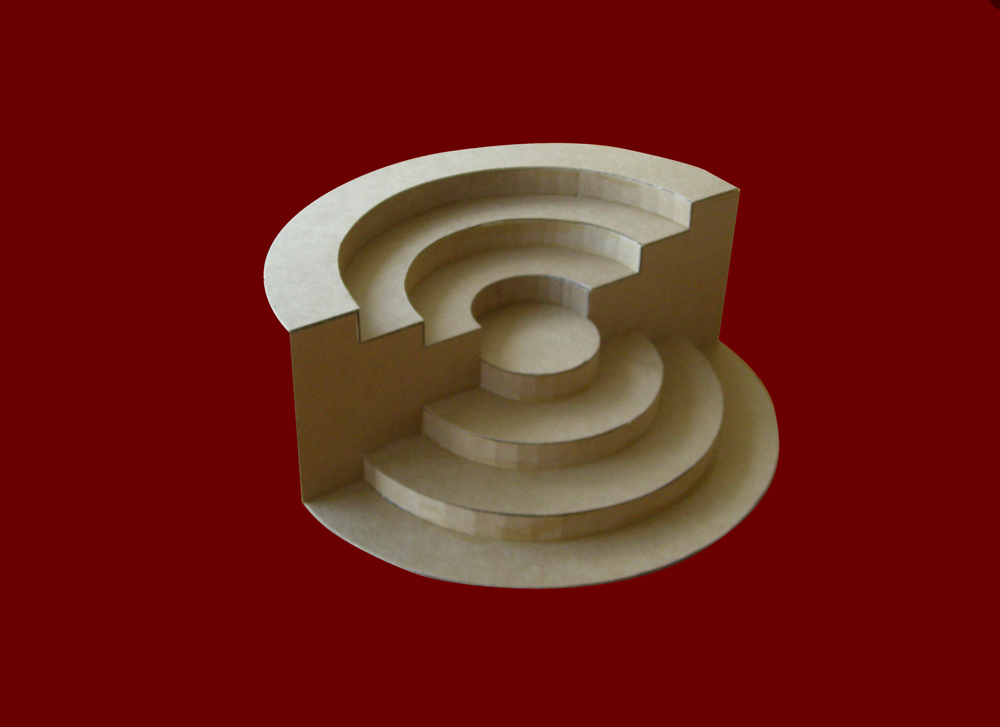 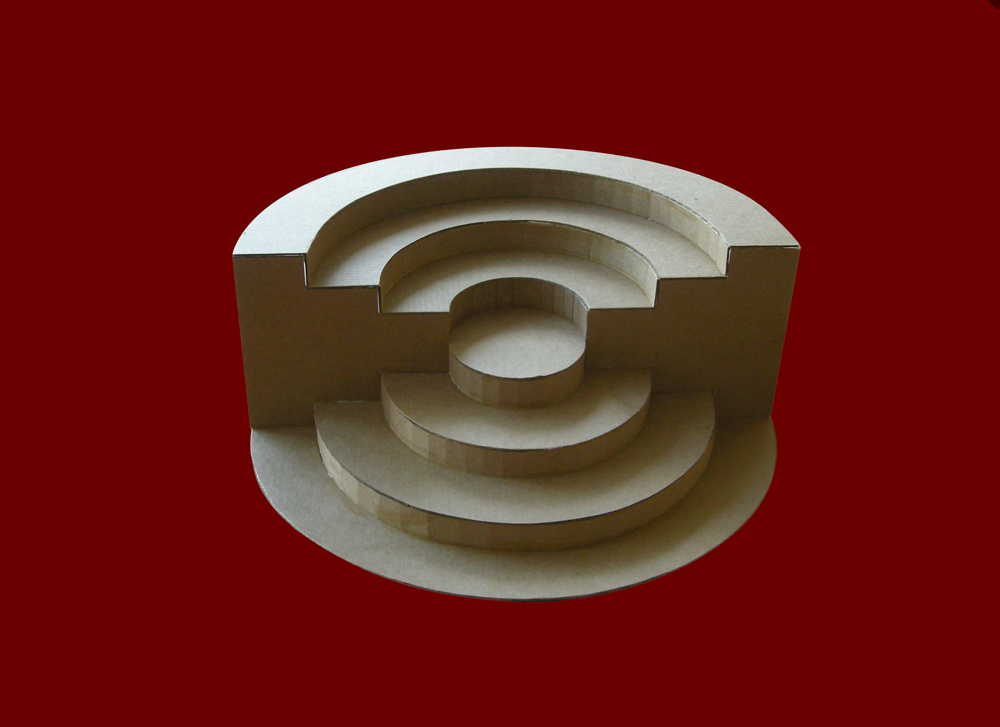 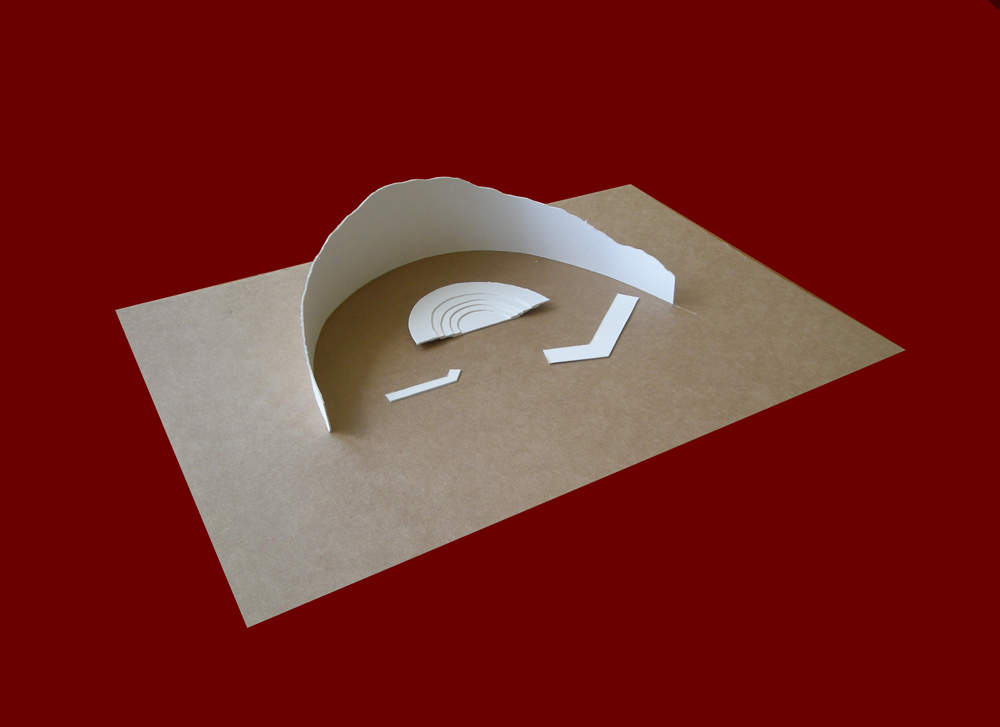 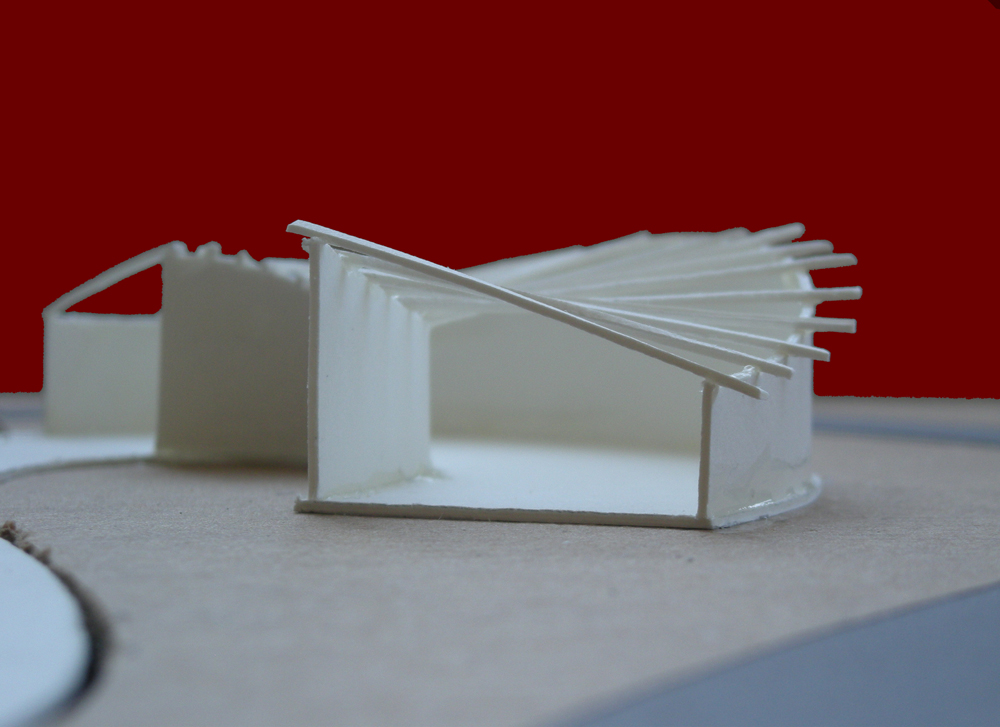 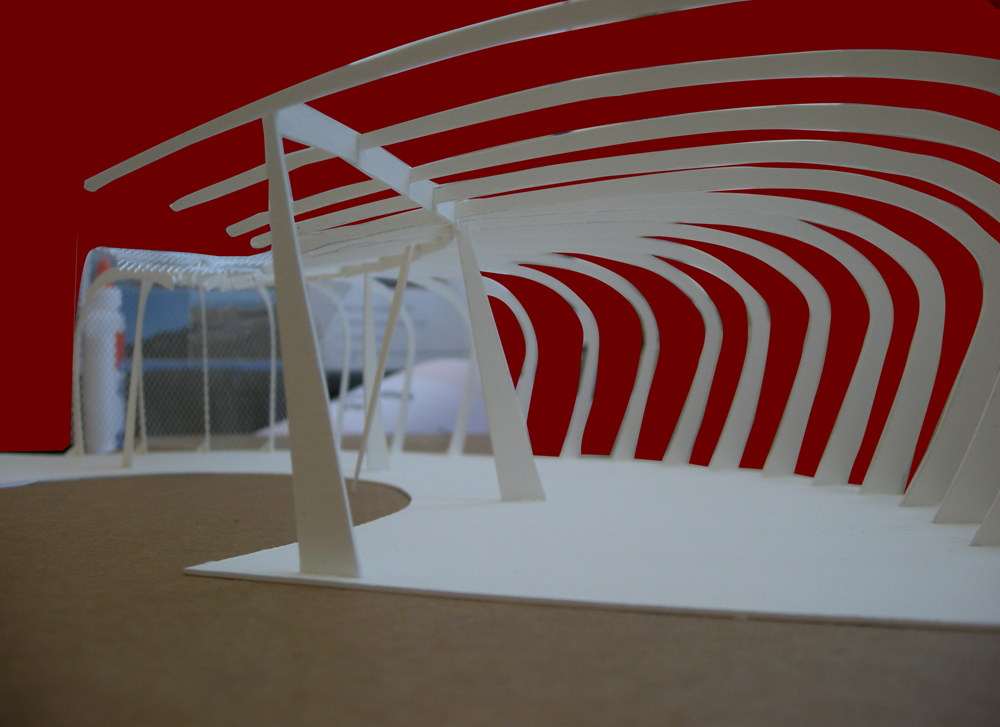 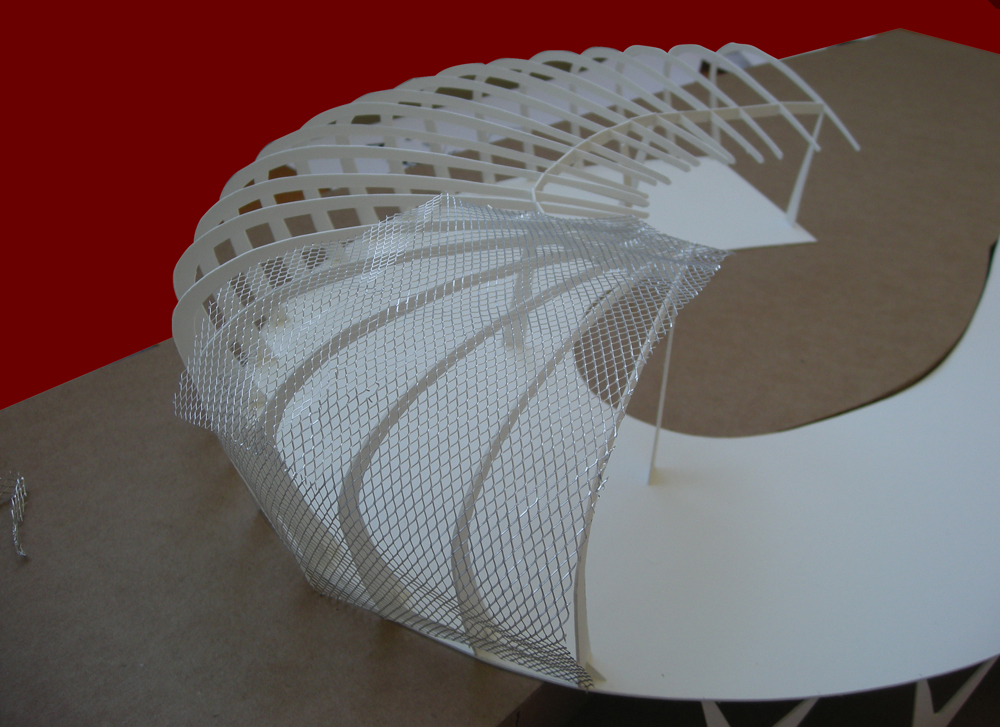