The “Research” VDL I and II achieved the goal that had been proposed Neutra: solving generic problems of architecture and be at the same time, intimate family portraits.

The house poses a whole range of questions. How can an architect communicate their professional ethics from an aesthetic point of view? The response of Neutra shows how increasing urban density in a city, how to accommodate and reconcile in a home or office uses a potentially irreconcilable and how to expand human vitality through an intimate connection to nature.

With the name of VDL, Neutra honors their former patron.
During his trip in 1930, Neutra met Van der Leeuw, whose new factories, illuminated by the light of day, rebosaban modernity. Hoping to live in a Neutra house avant-garde, the Dutch industry was shocked when, during a quick visit to Los Angeles, met the modest bungalow in Echo Park. Van der Leeuw loaned Neutra 3000 U.S. dollars to build their own house (the rest is put the architect). The VDL cost less than 8000 dollars, about 105,000 U.S. dollars today, a real bargain. Neutra he returned the money, with interest, at the end of the 1940s.

The ‘laboratory’ of research space and equipment was reduced to ashes in a fire that was declared three decades later. In 1966 he built the house VDL II in the same spot, but with a new way.

To give an effect of density, Neutra interpreted in its own way the rules of government construction and shifted the newly established structure of two floors to the street in nearly the entire width of the field. Here, again, Neutra is managed to skip building standards, declaring it as “garage” certain areas of the house, to exploit using a piece of municipal land.

Chose a neutral place that was strikingly similar to his patron, the Dutch industrial Cornelius van der Leeuw, on the outskirts of Rotterdam. The design of Neutra occupies a plot of 18 x 21 m, located a few hundred meters from Silverlake, an artificial lake surrounded by a residential neighborhood in a rugged terrain not far from downtown Los Angeles.

With its alternating bands in the front window-frames of steel and white-stucco, the new environment (the conventional term “house” can not be applied necessarily) of 214 m2 must have seemed too daring for its aesthetic allegiance to the modern architecture Europe.

Similar to the Roman villas or homes in Spain, an interior courtyard separating the main house and guest house (63 m2, 4300 dollars), ending at Christmas 1939.

With its reduced level curves, the VDL-tone silver and dark with shining moments of sensuality: the “honeymoon moments of life” wrote Neutra-were also “vital functions”. The texture of the body contrasted with the steel panels illuminated by the light of midnight, easily washable. Most of the furniture was built so that its maintenance is easy. In both houses, VDL I and II, the bedrooms are small, such as compact cabin of a ship. The small and bright kitchen drawers included coated metal that could be pulled from both the dining room or in the kitchen, to distribute the food discreetly. Some eaves protect the room from the sun of mid-afternoon. During the day, with a sheet of aluminum siding located at the tip of the eaves of a meter and a half gave shade to the crystal-oriented to the west.

Neutra gave more importance to the psychological comfort and change the perception by illusions of space and are therefore “stretched” space as much as possible. For example prolonged the upper band of stucco by the volume of the room to frame the entrance below. A large mirror visually double the space of the narrow entrance. It also introduced a hallmark that worked only at night: the lights in the overhang, with translucent glass, its light expanded the space for housing. Besides the glass reflector also acted and provided an effect of intimacy. The abundance of glass provide light and views in all directions. The roof of the wooden roof, which is accessed through a ship’s ladder attached to the wall east of the porch, providing a private outdoor space.

In the words of Neutra, consisted of a “shelter for a small family, with a minimal kitchen and a study in the rear, a single floor; parts for housing, dining, kitchen and a porch overlooking the lake, as well of a wing with separate bedrooms, a workshop in the basement, a playing area for children, two terraces and two landscaped courtyards. ”

Two large sliding glass doors open onto the garden and steel almost the entire western end of the hall of the guest house. A “bridge” of 19 m2 rarely used and some rooms on the ground floor for the children of Neutra linking the two large buildings, bringing the complex becomes a form of H.

Both in VDL I like VDL II, makes up a small bridge the transition between the public and private life. Behind are two doors. The first, transparent, is oriented east and provides an instant visual access to the courtyard garden. The other is oriented towards the study, to the north. The ground floor, with its neon sign, housed the studio, with space for secretaries and draftsmen, including Gregory Ain, H. H. Harris and Raphael Soriano. The upper floor was occupied by the private home of the family Neutra.

As Neutra could not afford to build the house entirely of steel, but wanted to give the effect of strips of windows like those of the skyscraper, altered the conventional construction of wooden boards (2×4) and used larger tables (4×4), rolled to house pairs of windows with steel swing. The pairs of windows dictate a sharp one-meter module, a pace dimensional which became standard for many of Neutra houses in the upper deck used sheets of glass largest fixed in the same module. Beams of precast concrete floors and tables suspended provided fire, which turned out to be a blessing from heaven thanks to them, the files in the basement survived the fire of 1962.

Neutra convince manufacturers that donate material such as aluminum foil, using combinations of rock wool, rigid insulation and lightweight cement puzzolana. The folding doors industrial steel and glass leading to the porch outside. 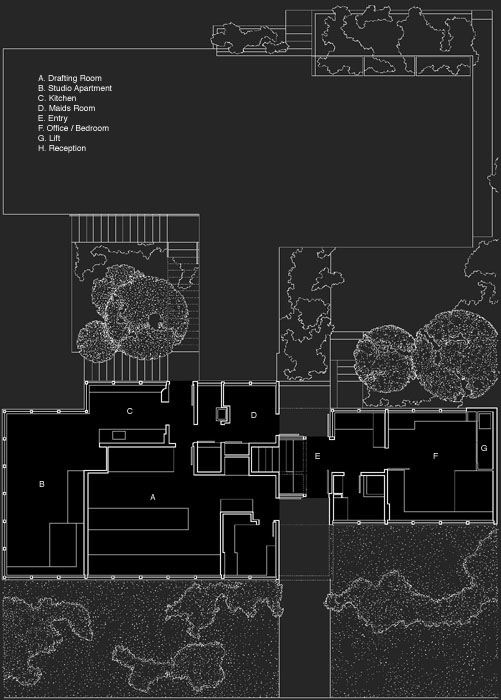 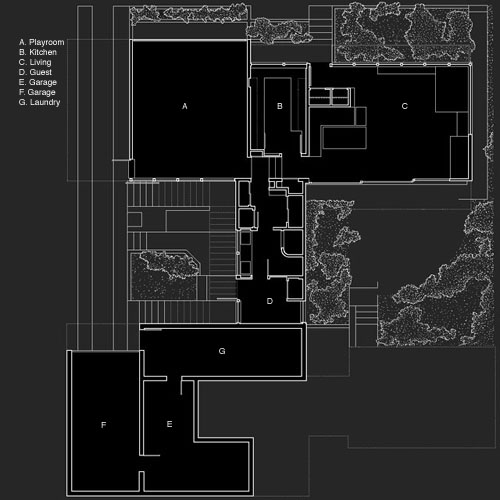 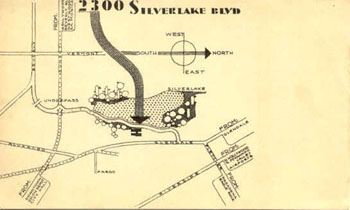 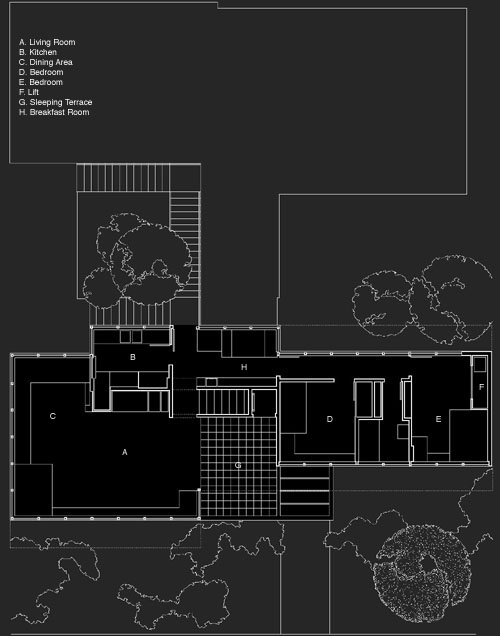 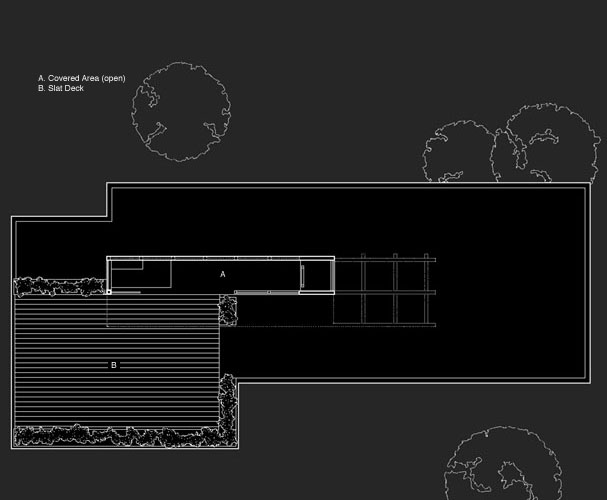 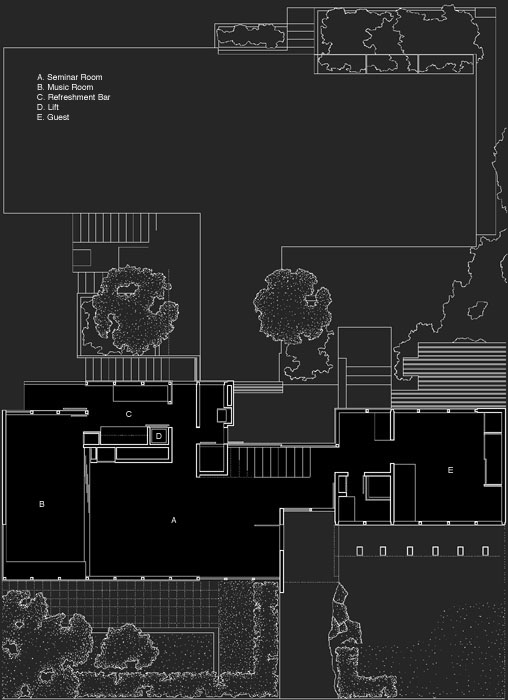 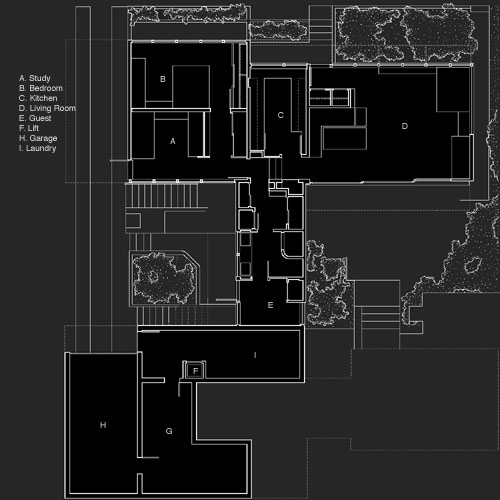 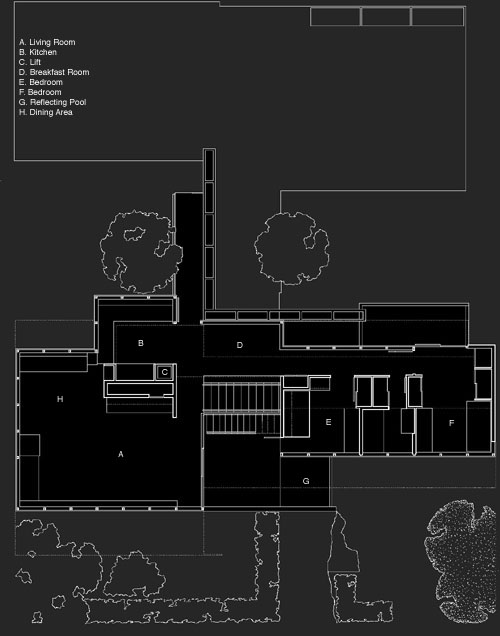 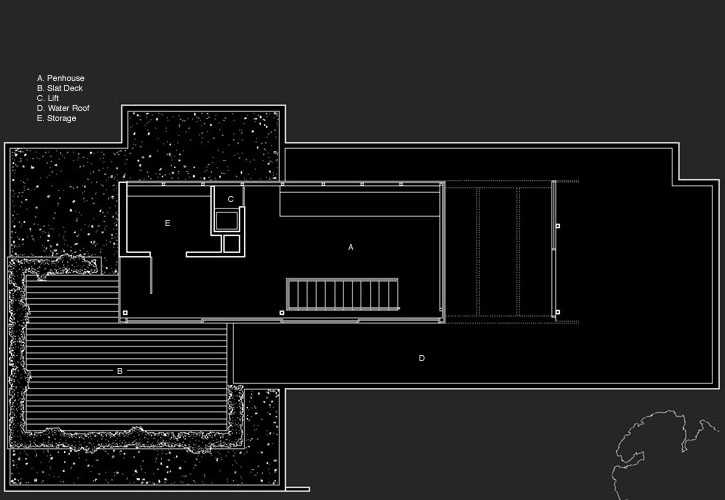 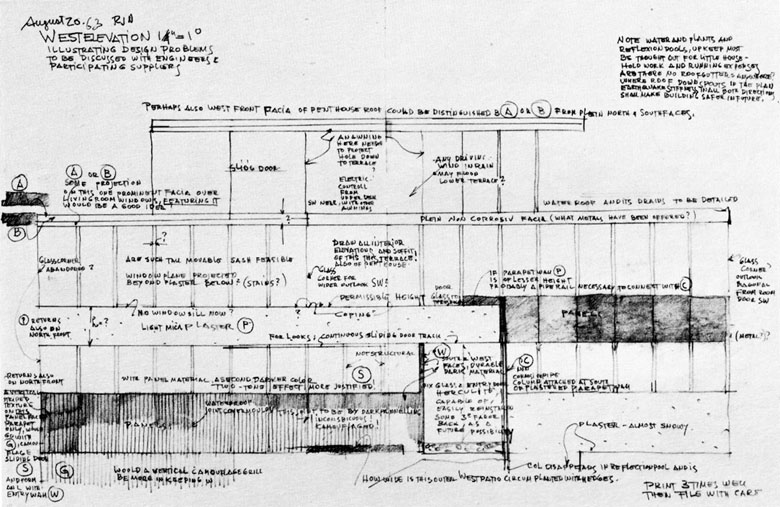 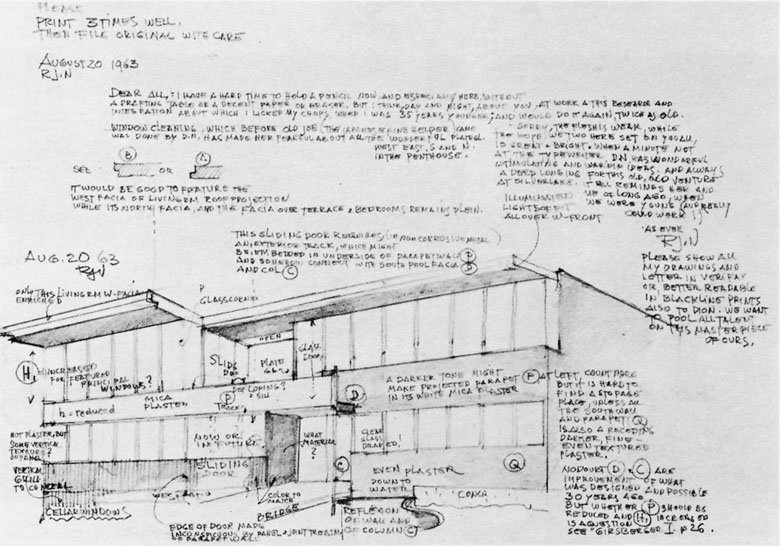 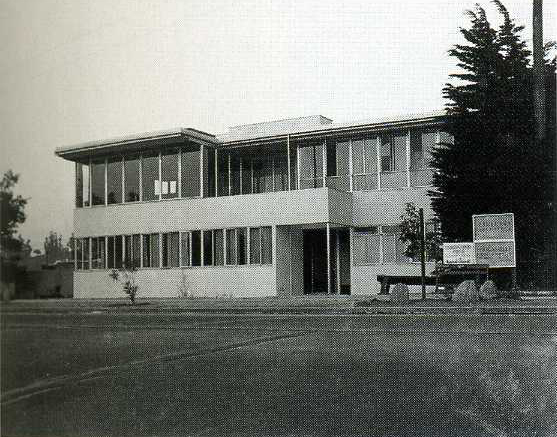 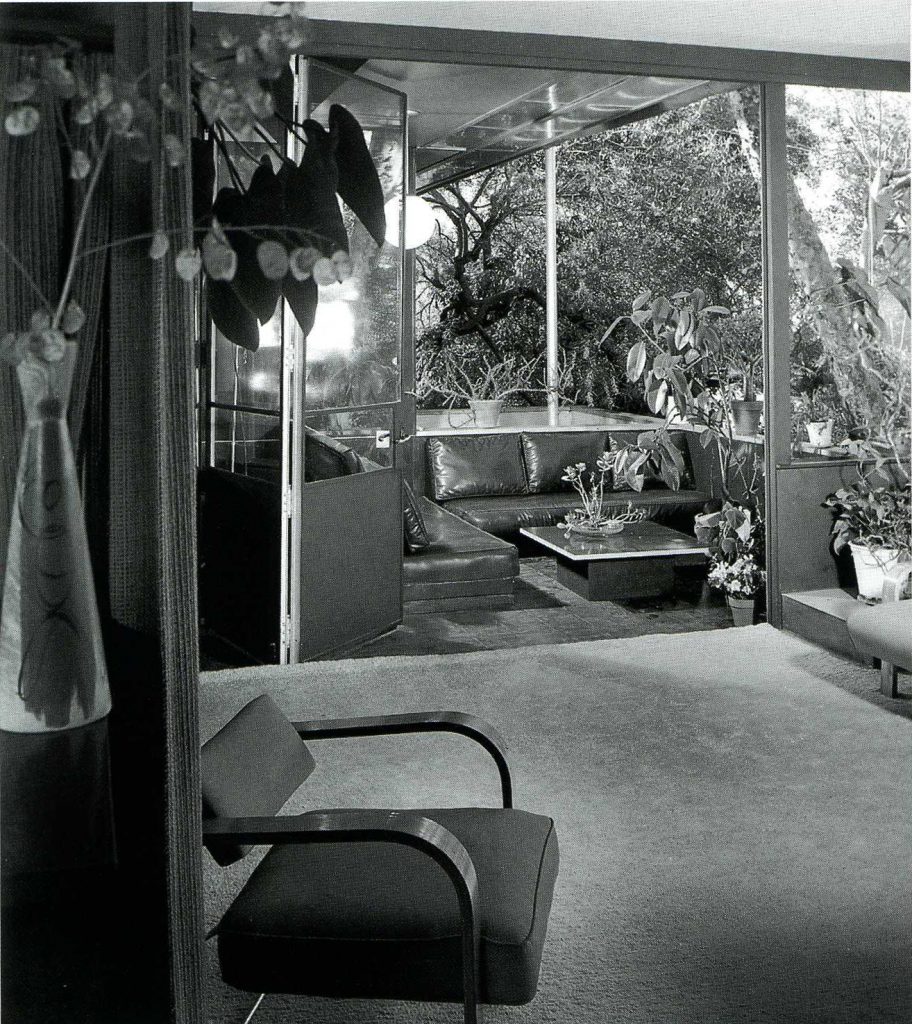 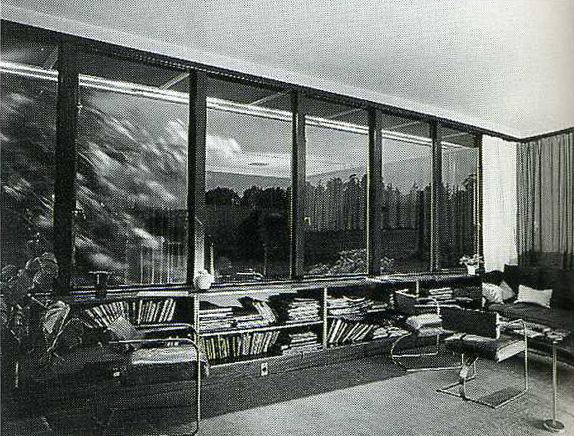 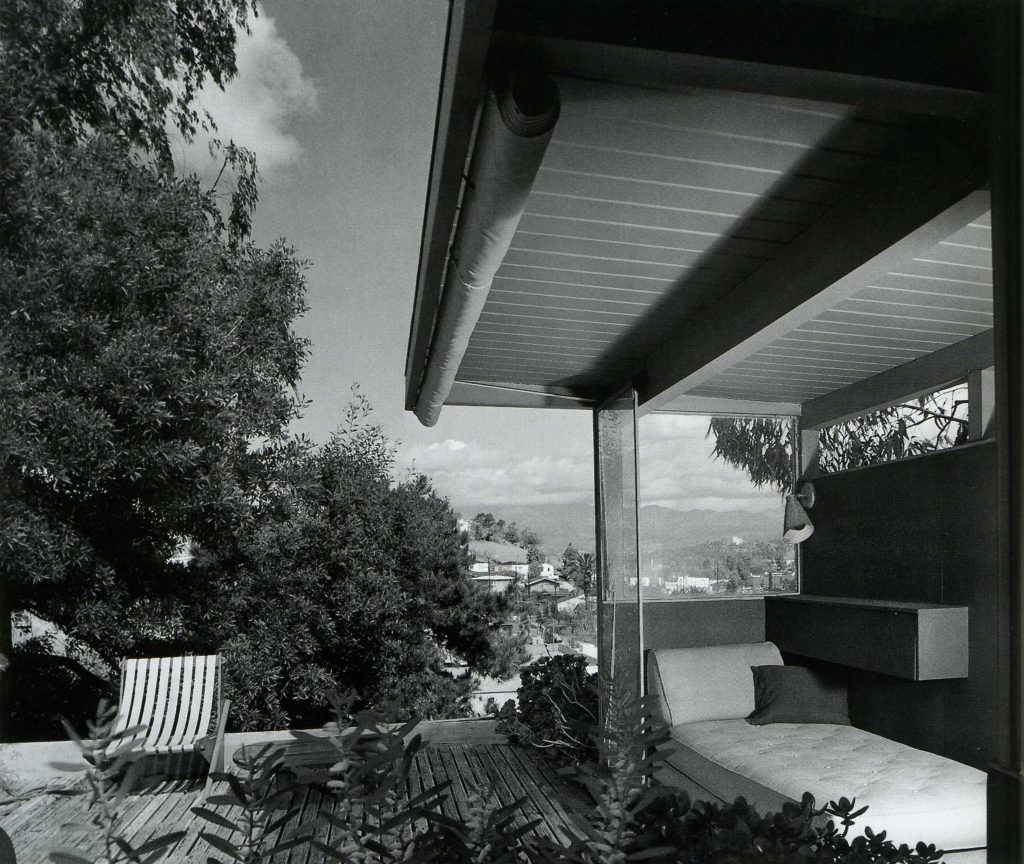 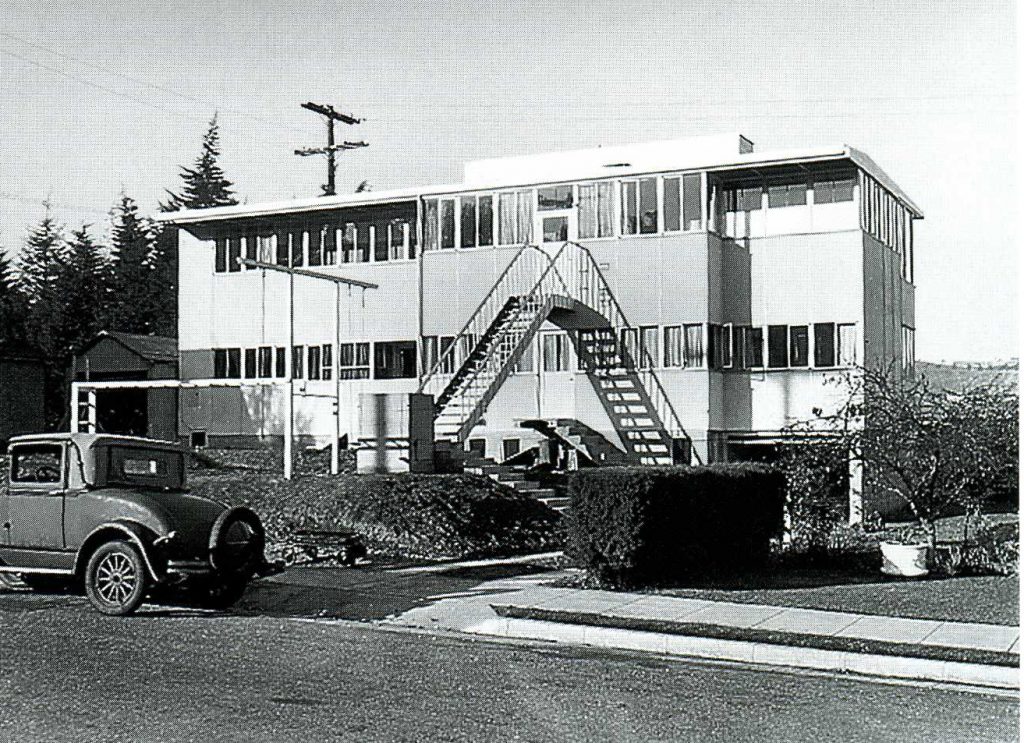