It is proposed to build a theater for the representation of works of contemporary theater, as well as the development of other complementary activities. The geometric configuration and size of the place that must occupy the new building makes a particularly significant development of an architectural exercise which should be chaired by the freedom and versatility, though, by contrast, makes it possible to give a resulting urban spaces remarkable capacity for urban qualification that may otherwise disappear.

Earlier this site was in the courtroom Olympia, made by the architect Secundino Zuazo, inaugurated on November 14, 1926 for the film.

The new building is the work of the architects Ignacio Garcia Pedrosa and Angela Garcia de Paredes and emerges as a result of the agreement signed in 1999 between the INAEM (Ministry of Culture) and the Madrid City Hall. This has lifted a campus that is part of the process of urban renewal, architectural and cultural history of the area.

It occupies a block of sharp triangular geometry, between the streets of arguments, Valencia and Salitre, in the Madrid district of Lavapies.

This overwhelming presence of apple urban faces its apex, which is currently non-existent, with the square of Lavapies, today with almost no urban character, which is filled in with the new height edification that consolidates the urban space.

The project was designed with the idea of contributing to the regeneration of the district in which the enclave, as well as the versatility of their operating rooms and spaces, capable of hosting mounts almost without limit configurations.

The theater has two exhibition halls equipped with the most advanced technologies, which adds a third multipurpose space for conferences, exhibitions, presentations or dramatized readings.

It is the main hall and gives its name to the project. It has a simple and compact provision that arises as a pure and versatile 17×36 meters in floor, with a maximum capacity of 510 spectators, which can be configured either conventional (available with front) or freely thanks to the lifting platforms under the stalls and an array of combs continuous distributed in various galleries techniques. It has a stage 15 meters wide and 10.5 meters deep
The galleries of projection and lighting go to the side room.

Has 150 seats that are placed around a scene-ranging form adapted to the needs of each of assembly-14X14 meters.

The third room, with 100 seats, which are scheduled conferences, exhibitions and dramatized readings, is located on the atrium of access to the theater

In addition to its use as a theater, the building space for equipment management, production and technical office of the National Drama Center, as well as warehouses, auxiliary rooms and small workshops. Its modern facilities, its flexibility and a cutting-edge equipment scenic make it the banner of contemporary theatrical creation.

Access to the stage of material is produced directly from the street Valencia at the scene. On this space and connected vertically are arranged workshops.

The rehearsal room, equivalent in size to the scene but with a limited headroom inside to nine meters, and located on the balcony of the room, allowing the preparation of the scenic mounts prior to their representation in the main hall, with the possibility of decorated suspend work and lighting elements.

At this level have the executive office and administrative management of the new theater, opening a broad viewpoint on Valencia Street.

The backstage area of actors, as well as the rest of the scenic, are developing a floor below the stage at the pit scene.
The relationship established between the public and representation, necessarily open and flexible, impose some access schemes and also linear movement and schematics, so here goes away the remarkable complexity of Foyers, corridors, halls and distributors of classical theater.

This space continuum that extends opposite the entrance to the theater, permeable to the plaza that opens in a visual way to the steep slope of the street in Lavapies, becomes anteroom, a true urban lobby entrance to the building and natural extension of the Piazza Lavapies.

The structural parameters of concrete up the blind orthogonal prisms that are opened through curtain walls on the square, while maintaining the alignments of the side streets, walls are built through-truss concrete slabs of slate implemented and elements of carpentry aluminum and glass.

The significant volumes and heights of the hall and tower of the stage that require theater will attach to the medians of major post presence, until now descarnadas, in a process that also must allow for the volumetric reconstruction of the apple.

Since these medians, fragmented volumes of the various component parts of the new building will be adapted to the difficult geometry of the triangular site.

Visually it is set in three significant volumes of concrete, steel and glass.
In the interior floors of slate and the parameters of sycamore wood that are of the lobby.

The front windows at night are transformed into prisms of light that let you see from the outside, the inside walls of the room lined in sycamore wood and the movement of the public in the lobby.

There is a complex system of gates that connect the lobby for access to the stalls, offering various possibilities of opening

Industrial mobile aluminum panels perforated black shape these walls techniques, while the ceiling shows the structural elements and metal walkways that allow its use as an extension of the stage. 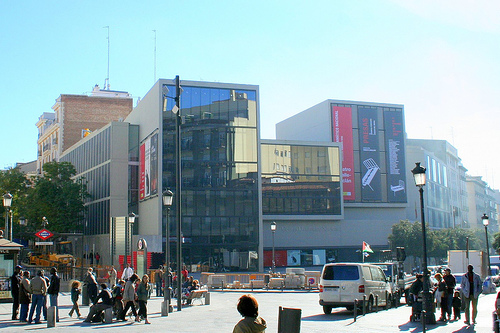 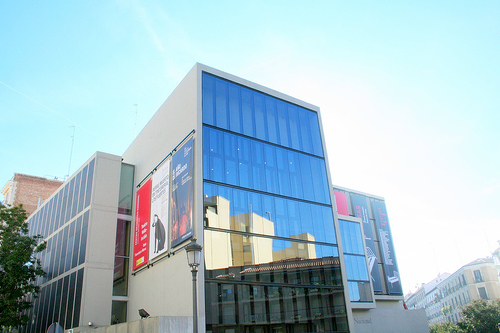 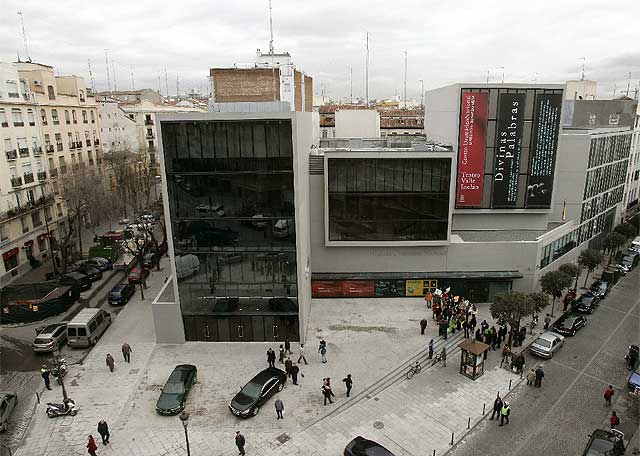 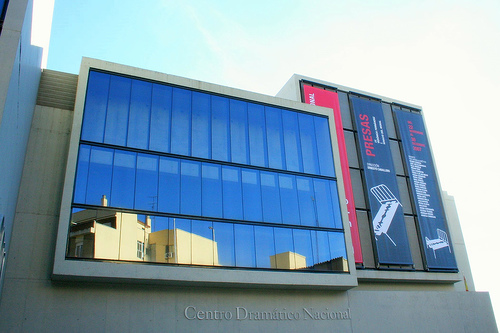 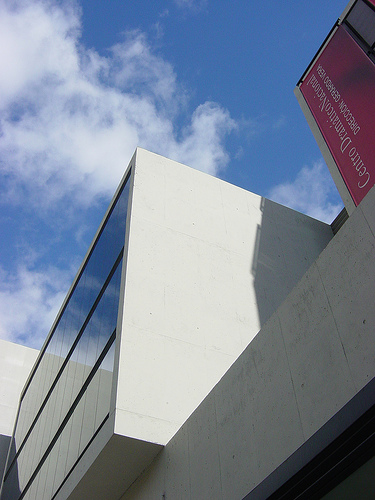 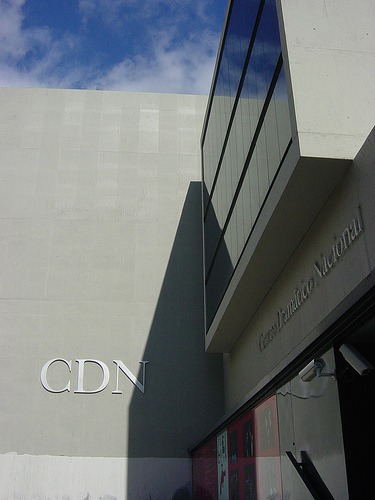 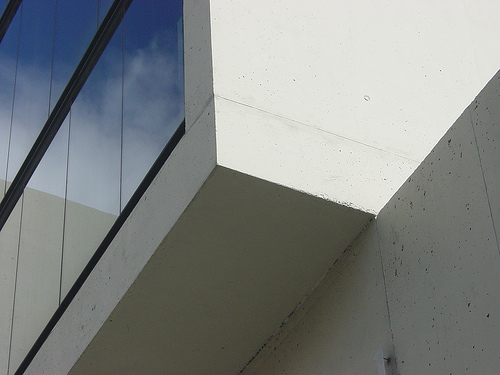 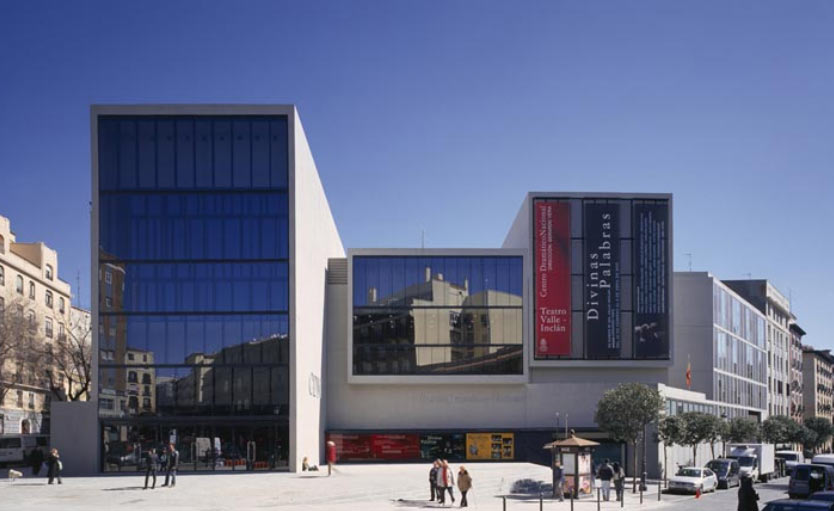 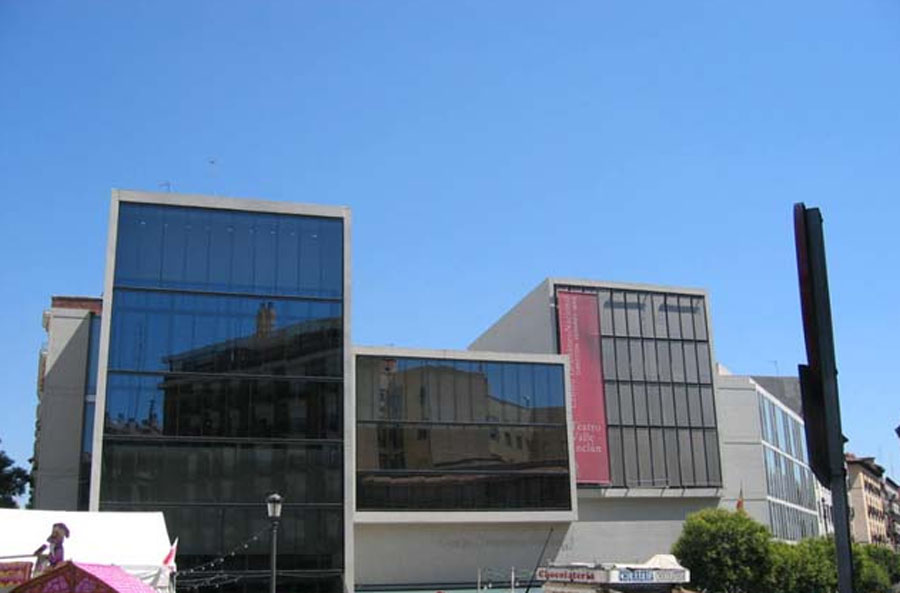 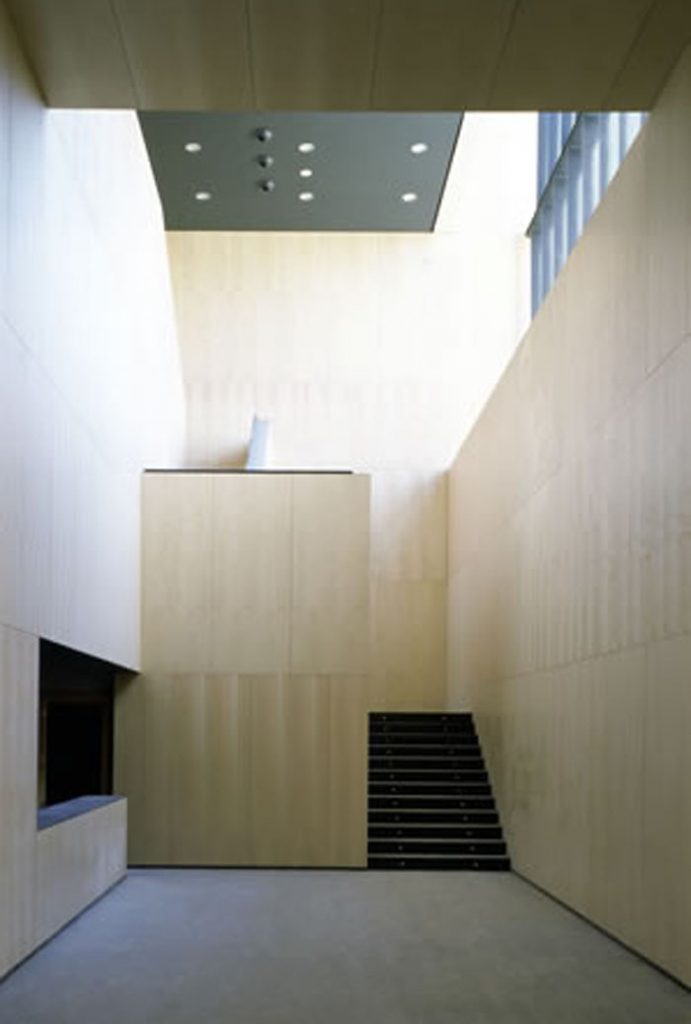 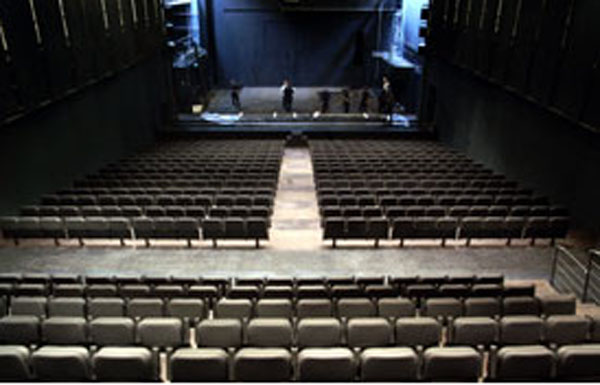