The house that the architect Jørn Utzon built for him and his family is small, but monumental in conception, a single plant in the forest. The platform on which it is retracted from the trees, a little back to nature, watching rather than join it rises. Its rectangular open in those years began to be popular in America, but in Denmark, more conservative, was a novelty.

In the winter of 1943-44, there was an exhibition of modern American architecture where Utzon was particularly impacted by the house of Frank Lloyd Wright. Estole study carried Wright’s work in more detail, Wright’s concern for nature and characteristics of each work and the need to address both the internal and the external space, along with the conviction that each project requires its own special approach.

Forest land where the house was built belonged to a larger house in Hellebæk, small coastal town located approximately 5 kilometers north of Helsingor and just 45 minutes from Copenhagen, capital of Denmark.

Through notes Kay Fisker, Utzon teacher at the Royal Academy, we know that the architect draws on numerous occasions to book an appointment Voysey, 1906:…. “Reason as the basis of art”…… “the sense the order transmitted by the breath of the surfaces and peaceable disposition suggest qualities like loyalty, simplicity and self-control. Generally not value simplicity itself. We travel a lot to be versatile and cosmopolitan in our tastes and resorts in our behavior, this is for most people the most attractive simplicity of character and conduct, for which is necessary if you want to acquire them, a strong will and independent thinking “…

Utzon wrote…. “The simple and primitive country life, travels through the mountains on skis, sailing trips, a few weeks with the Arabs between the mountains and the desert, a visit to North America and Mexico, lifestyle Indians, this has created the foundation for the lifestyle that my wife and I wanted to take, and therefore to design our home “….

The house is small, 130 square meters, the maximum permissible construction area if they wished to receive a loan from the state, but despite its measures there will achieve a certain monumentality. With this house Utzon introduced in Denmark utilization of modern open floor plan.

Access is via a long driveway leading to a covered porch located between the garage and the blind side facing the north, with the exception of small retrancado space where the entrance to the house. 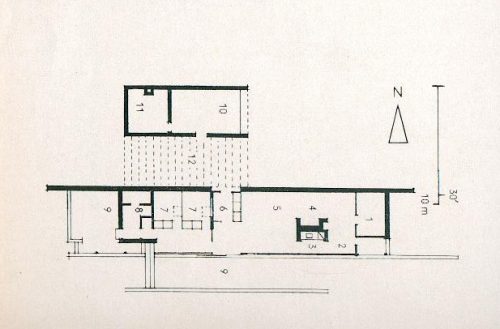 In the hall, towards the eastern end, a compact and isolated nucleus, brick, enclosing one side, to the south the kitchen and the other, face north, a free home fire is located. Despite the large opening of the public area, lounge, small details like the fireplace, suggest different functions of spaces. The area for visits, dining area, a cozy sitting area around the fireplace. Another divisive element is the sliding door, hidden in the buttress brick chimney, which should be suitable table hides the kitchen work.

In 1957 was built on the northwest façade an annex with kitchen, bedroom and bathroom, leaving most of the interior space as a lounge.

The house has only a facade, south overlooking the landscape, forcing windowless bedrooms to stay, and resting on the north wall, having to get natural light through skylights in the ceiling.

Influence is evident Wright and Mies in design, who visited him in his journey to America in 1949. Brick walls parallel and large flat glass south facade, opening the house to the terraces staggered and supported by small retaining walls, following the slope.

Front View of the south facade, the house shows a light wooden structure, supported on a solid brick platform, with brick walls also. In the jargon of architectural theory could be defined as “a tectonic superstructure on a stereotomic base”. This concept is repeated in future work of the architect, as he did in his most famous work, the Sydney Opera House. 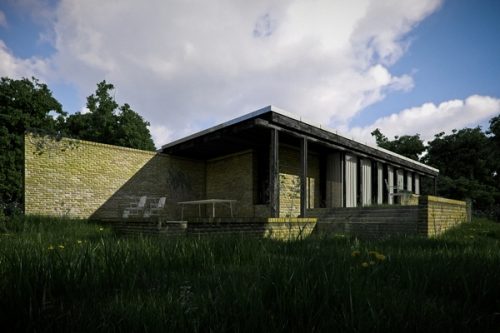 When Utzon began to build the house on the edge of the Forest of Hellebæk, just outside the small town of Hellebæk, it was rumored that an innovative approach to family houses was in the making. Considerable renown architects visited the site to monitor progress. Utzon himself directed the construction work without any technical drawings, since the building often changed, as if it were a sandcastle. He had learned this approach in Finland in 1946, when he spent a few months with Alvar Aalto who had exactly the same method used for the Villa Mairea.

After experimenting with some models, Utzon built a version of the wooden house-sized in order to get an idea of ​​how a house with 130 square meters of space will look like in practice. He paid special attention to your surroundings: the sun, the view and shelter from the wind. The result was that decided to build a completely closed wall along the north side and a glass wall open to the south facade. The builders agreed to work under the direction of Utzon, without plans. The north wall is first completed to establish the basic geometry. The kitchen and the bathroom is then added, then the remaining rooms are arranged with movable partitions and doors of pine in order to facilitate further modifications were added.
Utzon used his house as a “laboratory”. It was in his study Hellebæk where he began work on the design of the Sydney Opera House.

Jørn Utzon The house built for his family, was economic. Factory whitish yellow brick was used in both its interior and exterior, Douglas fir and aluminum in its construction.

Some environments were, over time, covered in wood, others with yellow tiles baked on top of the walls, matching tiles, eg niche cooking, grill, shower or fireplace. All dimensions are multiples of 120mm, as a unit of Danish brick plus mortar joint.

For the walls and doors of the hall Oregon pine planks, that being bolted to a network offer the same aspect were used. This wood was also used on the north wall and ceiling. The wooden supports continue beyond the glass wall, also on the flat roof, accentuating the length of the building. The north facade is closed by a yellow brick wall with no windows. The living room fireplace was built with bricks.

For isolating walls flat roof battens painted black and recessed with respect to the alignment of the walls interposed.
The pillars and rafters of the south façade solutions have been treated with aniline black, and singing the eaves is topped with an aluminum profile.

The floors are tiled to fit the grid of 120mm, measured brick.