The Federal Court of Long Island, also known as Alfonse M. D’Amato Courthouse in Central Islip, designed by Richard Meier, was completed in the summer of 2000. It is the third largest court in the country and the largest structure in Long Island, showing the characteristic white building style of the architect. In its construction the Richard Meier team worked with the local firm Spector Group.

The court houses the District Court, Bankruptcy Court, Preventive Services and the Department of Probation, as well as the US Marshal Service. UU., U.S. Prosecutors UU. and several offices of the Court. It is named after the former US senator. UU. Al D’Amato, a native of Long Island.

This Courthouse is located adjacent to the Suffolk County Courthouse, in Central Islip, Long Island, New York State, United States, north of the Southern State Highway. The building has panoramic views of both the Great South Bay lagoon and the Atlantic Ocean. It was built on the grounds of the former Central Islip Psychiatric Center, discharged in 1996.

This building reinterprets the court as a new type of civic institution, receptive to public events, as well as to the formalities of the judicial process. The rational network plan allows a certain amount of modifications and provides for the internal expansion of judicial facilities over a period of 30 years.

The 12-story building is placed on a podium to gain an additional presence in a suburban site, undeveloped at the time of construction.

The terraced and raised esplanade that must be crossed to access the building is articulated by a surface modulated with rectilinear tree plantations that provide an appropriate environment for a building of such civic stature.

The access is made through a monumental truncated conical piece within which the visitor finds an empty roundabout that rises almost 55m, on the south facade, which is accessed from the outside by climbing 2 steps. This 9-story roundabout is illuminated at the top by a skylight and on the sides by glass walls.

The south facade is a glass curtain wall and gently curved that allows the entrance of light to the corridors and the views towards the ocean, with the juxtaposition of the conical piece that houses the entrance. The north facade is lined with metal plates and has narrow horizontal windows. This contrast between the facades of the same building expresses the difference between the front and the back, between public and private areas.

The side facades receive a different treatment since they clearly show the stratification of the building. When approaching from the outdoor parking you can see the west facade and observe a series of planes located behind the entrance cone that is in front of the brise-soleil. In turn, the north exterior wall creates the impression of a plane separated from the main body of the building by a vertical row of windows. The north facade is covered with white painted aluminum panels and horizontal windows.

The west wing of the building houses four district courts on each floor. In the east wing the courts related to finance are located, two per floor. In total there are 23 courtrooms: one for special procedures, 13 for district-level procedures, four for magistrate-level action and five for bankruptcy hearings and 24 courtrooms. It also has a library specialized in law, offices for several federal agencies, a cafeteria, a closed parking and an open one.

All courtrooms have a lobby with public space that connect to the adjacent cone and connect to each other in a bright central atrium on the 12th floor.

The atrium is the main public space in the building. On its north side it shows a large glazed wall, running parallel to it the bridges that cross the atrium.

On the east side of the atrium is the main meeting room for the jury, along with its service spaces, while the west side leads to public toilets, stairs and elevators. The second floor balcony is reached by an open staircase in the atrium.

Adjacent to the north side of the atrium and along the facade is the special procedures room designed as an independent volume to highlight the importance of the events taking place in it.

The public circulation of the building is separated from the courtrooms and the judges by a wall lined with granite that goes from east to west and whose plan crosses the entire building.

In response to functional and safety requirements, different circulation areas for the public, judicial personnel and detainees were obtained through a careful sequence of layers of public areas, courts and judges’ rooms.

In practical terms, the tower / roundabout has to do with security. According to the engineers, the installation of the Islip Court is one of the first in the country to create an entrance that is not inside the building. This tactic greatly reduces the danger of violence in courts and offices, while allowing a substantial number of people to enter the structure for security prosecution. The idea is to have a central control point until security can control it.

The facility sees four different types of people entering the building: the public, jurors, judges and staff and prisoners. With so many people with varied agendas, a controlled entry point and an adequate circulation scheme were essential, four different circulation requirements were needed. This requirement in the good distribution of the spaces dedicated to organizing different ways of moving is what makes the building more expensive, “but we must make everyone feel safe,” says the architect.

To make this diverse program work, the construction team had to systematically organize the facilities so that each group was within its own area. This was achieved from the inside out and is repeated throughout the building. The courtroom with four sides was placed in the center and each one was assigned a group, the front for the public, the back for the judges, the left side for the prisoners and the right for the jurors .

The cameras of the judges are connected to each other by means of long corridors, keeping the judges separated. The prisoners arrive at their detention cells through a direct elevator to the cells.

The steel frame structure is meticulously organized to accommodate as many procedures as possible. The basic structural system of the courthouse consists of a steel frame that supports a slab composed of concrete and steel as a floor. Its lateral force resistance system was designed to withstand the forces of wind and a hypothetical earthquake.

Given the mixed use, the building needed to have a structure adaptable to long and short range situations with a variety of possible loads, while transmitting a sense of security to its users. In order to achieve the ceiling height of 4.57m, required within the courts by federal guidelines, the design was closely coordinated with the architecture and mechanical systems, avoiding higher floor heights and additional costs.

The open roundabout with conical round walls that form the entrance to the Palace of Justice is structured in a steel space frame.

The bridges that cross the building not only serve to connect the sides, but also act as structural supports.

In its facades and interiors materials such as glass, aluminum, granite and concrete have been used. In the glazed parts the contours of the aluminum uprights of both the brise-soleil and the glass frames frame the light in changing patterns, depending on the time or color of the sky, reflecting on the corridors floors or on the granite wall

The slabs composed of the different levels are constructed with concrete and steel. Concrete is also the main element of the elevated square on which the building stands.

The conical part of the entrance is covered externally with white metallic panels.

The sunscreens are composed of a series of modular units 76cm deep and between 2.74-3.66m high, constructed with white-coated aluminum tubes and pipes that joined the curtain wall as it was completed completed with 91cm screens covering the entire glass curtain wall that is 183m long and 71.63m high.

While the shading system was certainly an important step in reducing the building’s cooling load and a success in reducing glare, it is only the first component to keep the space comfortable. The large area of ​​the building, with its many functions, required an automated cooling scheme. Thermostats regularly report room temperatures on each floor of the building, in turn controlling the volume of variable air in the boxes installed both in the courts and in the hallways. These boxes are programmed to automatically adapt the temperature to the load and the occupation of the space. 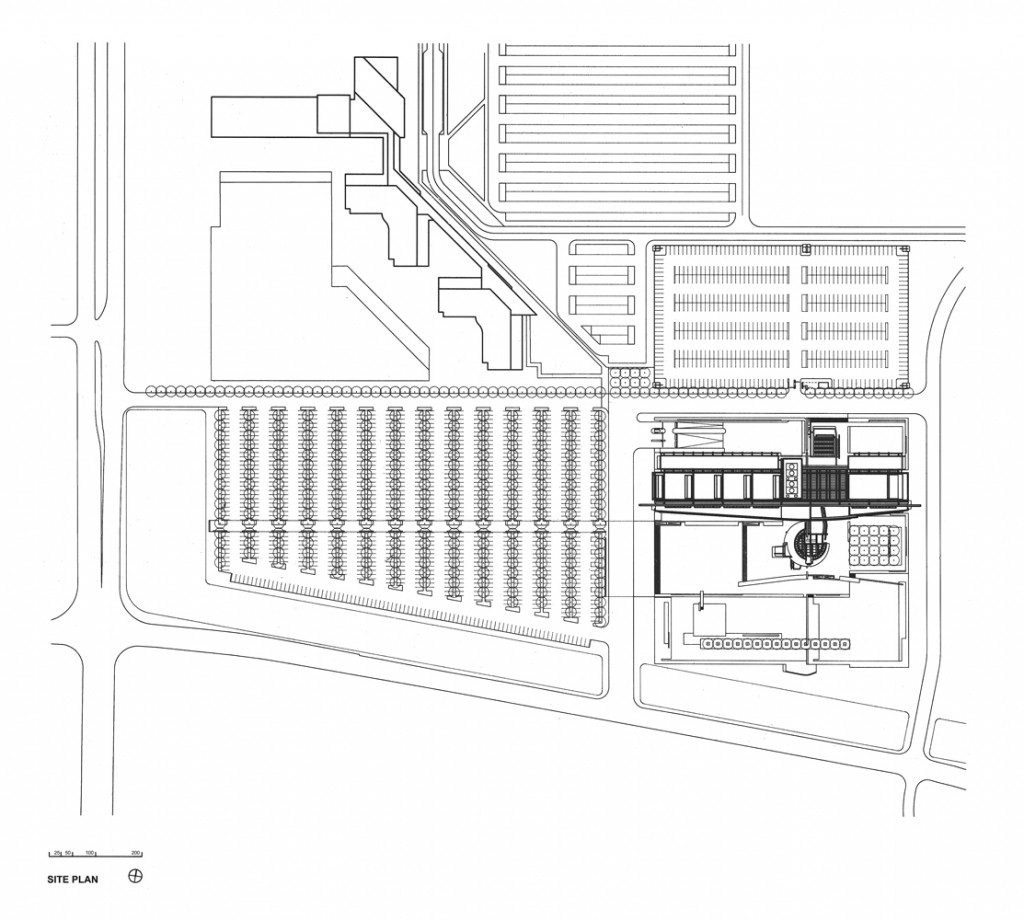 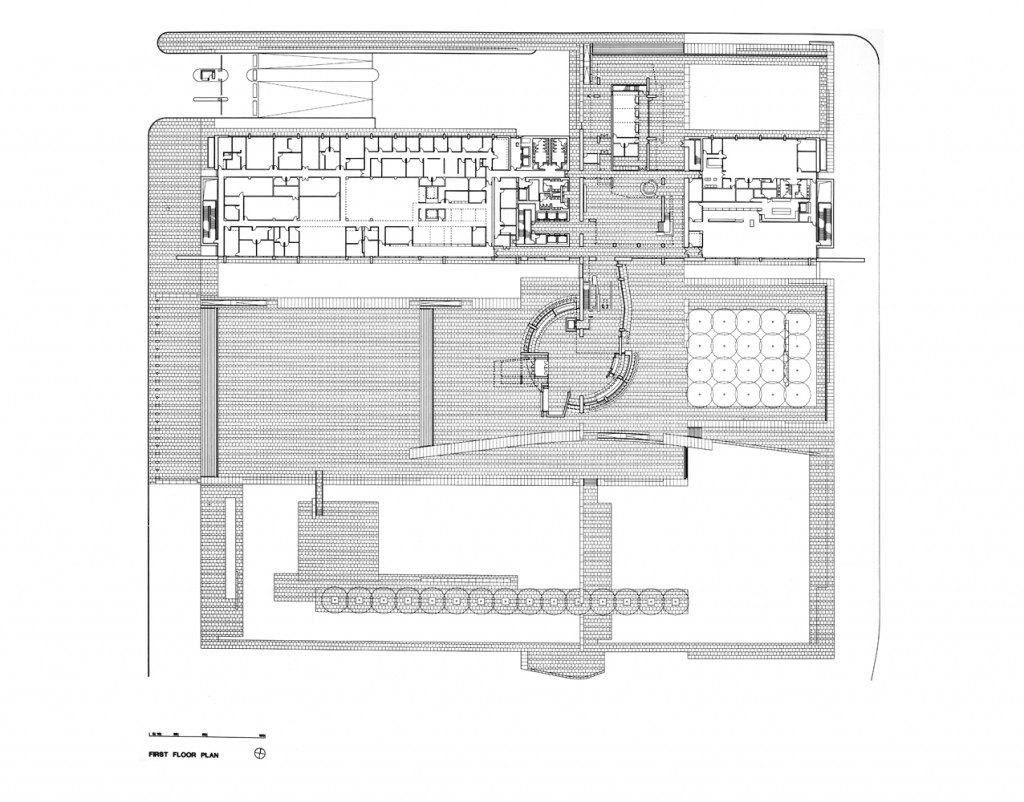 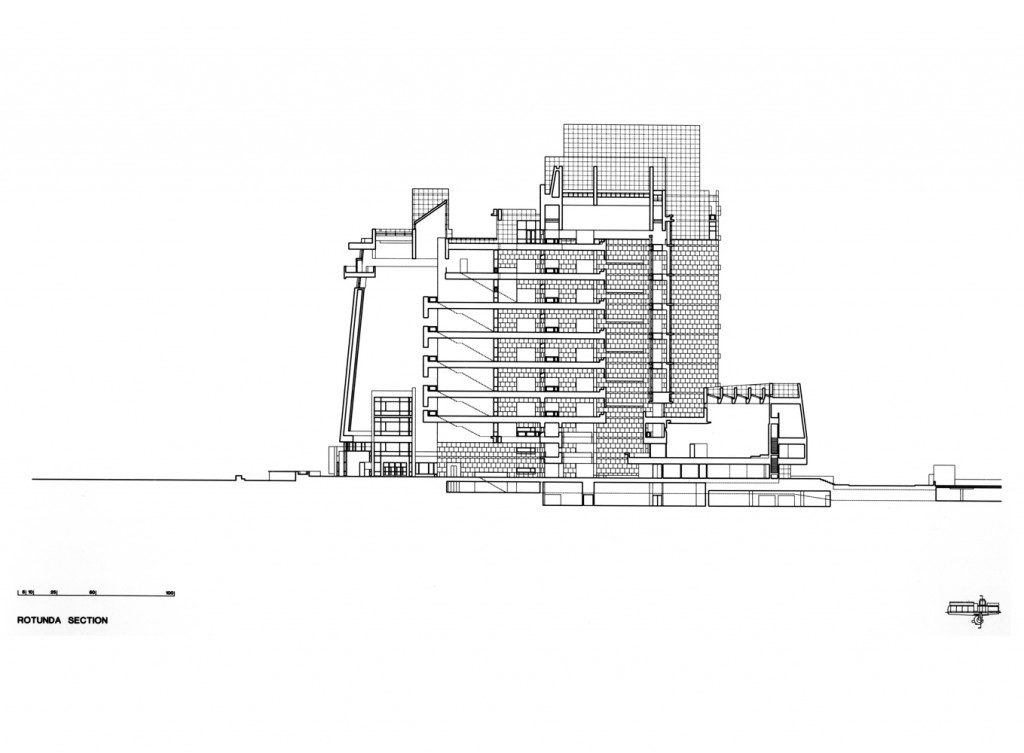 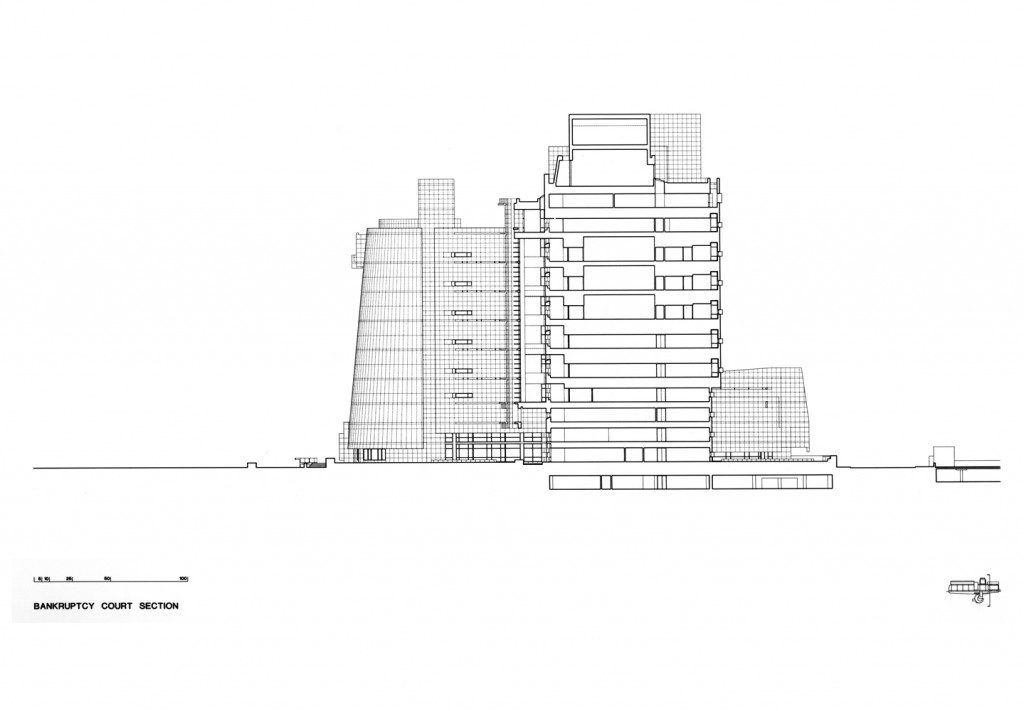 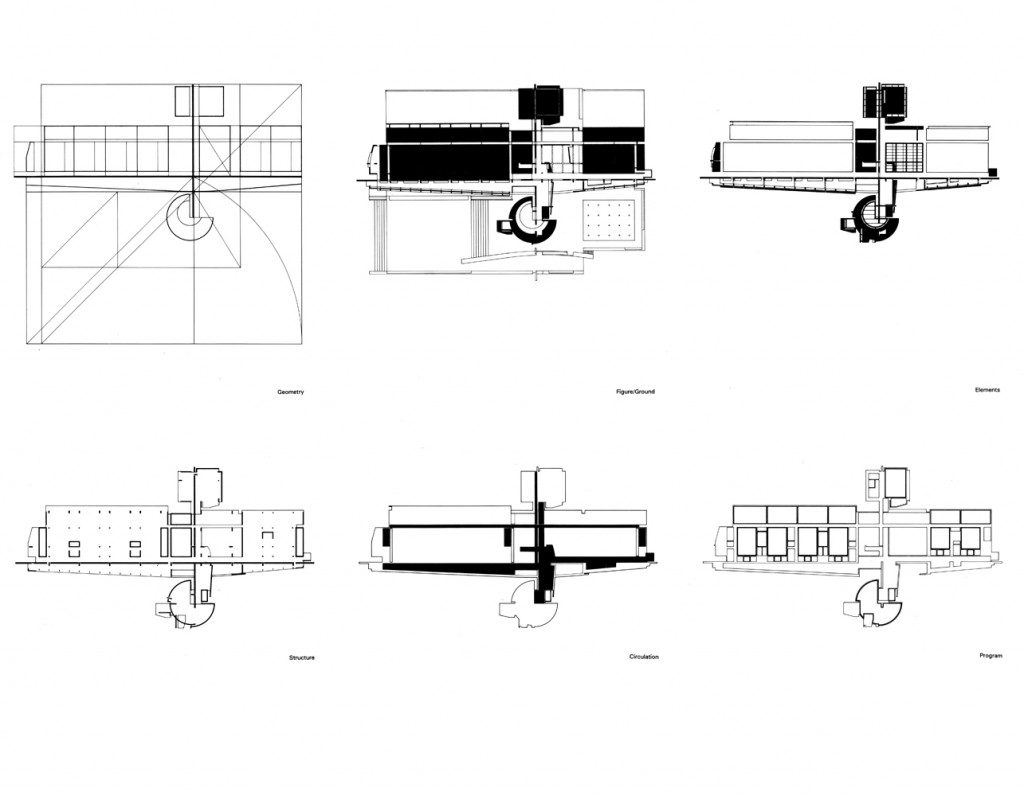 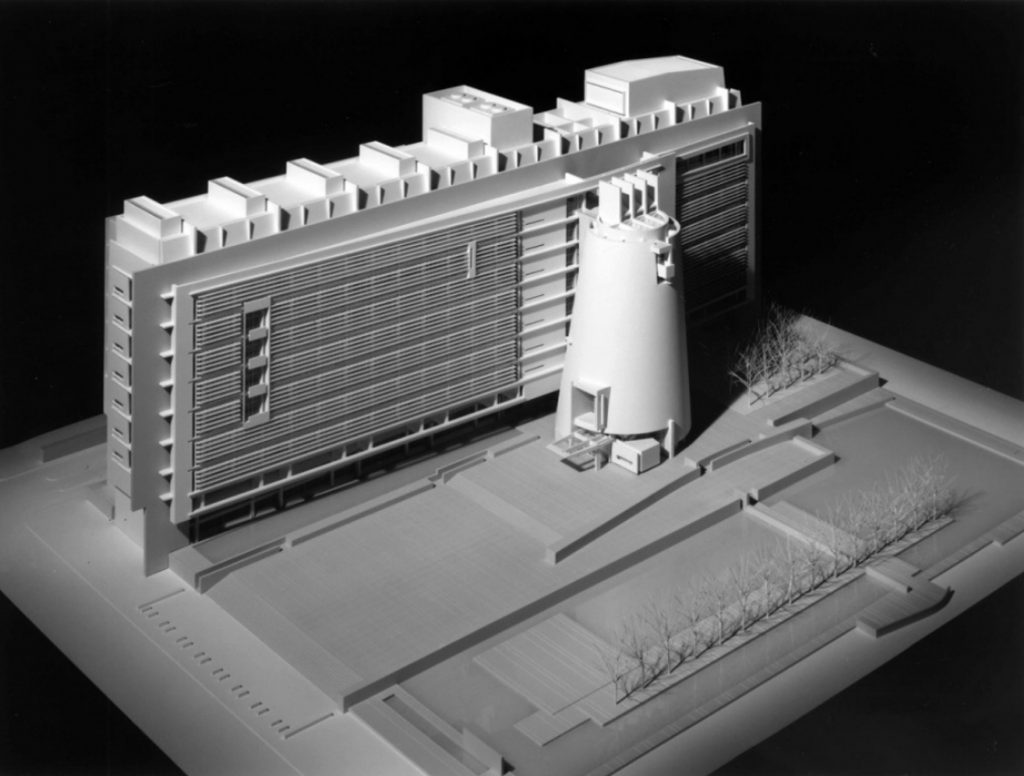 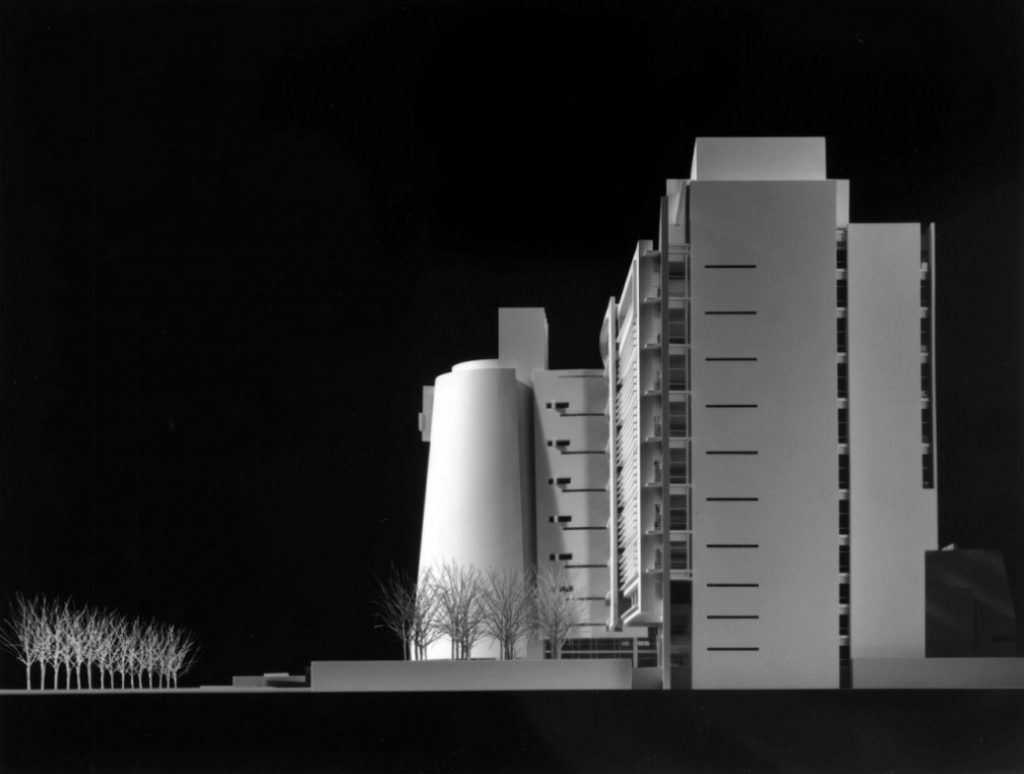 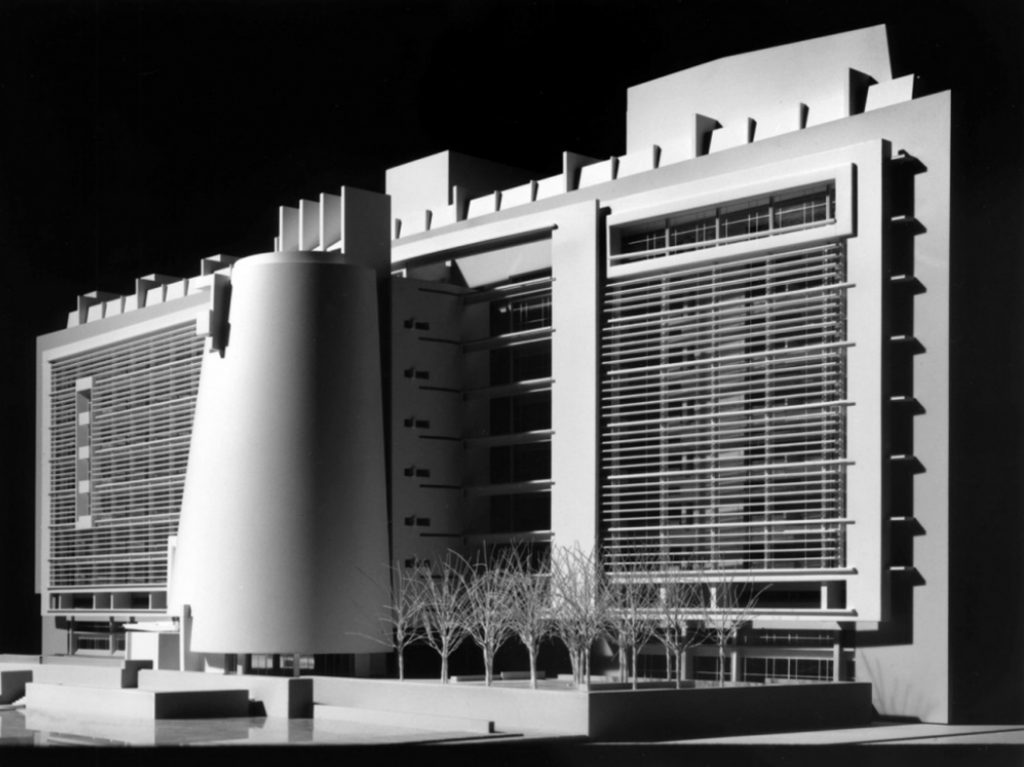 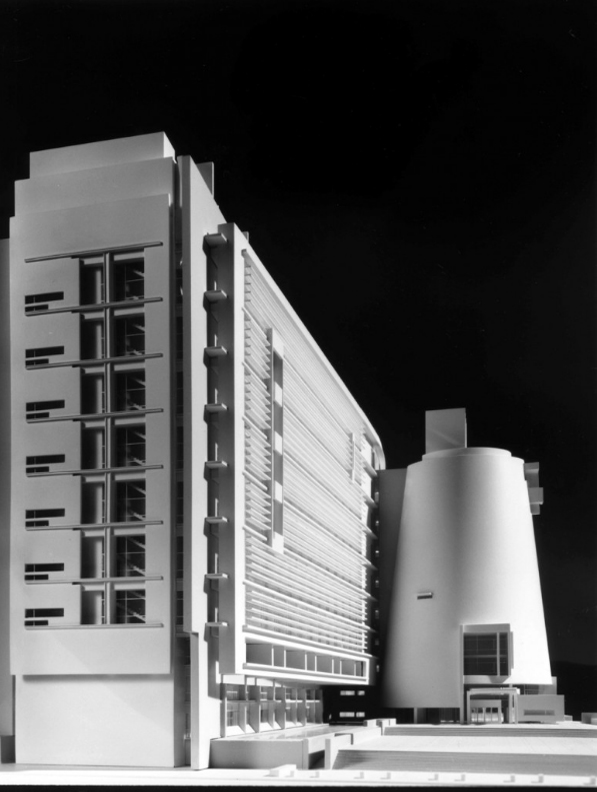 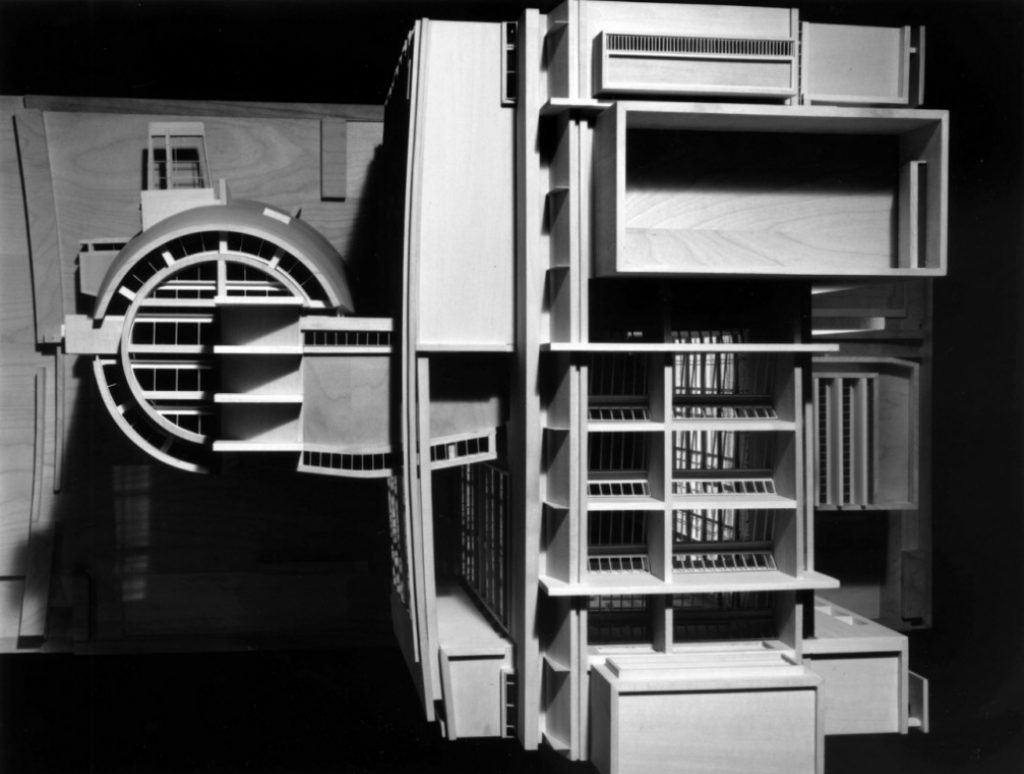 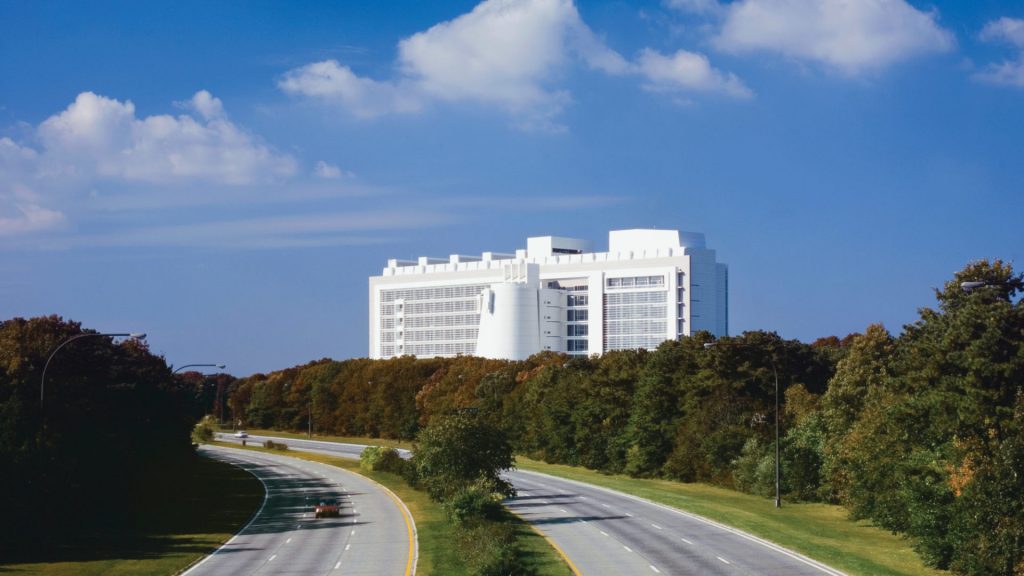 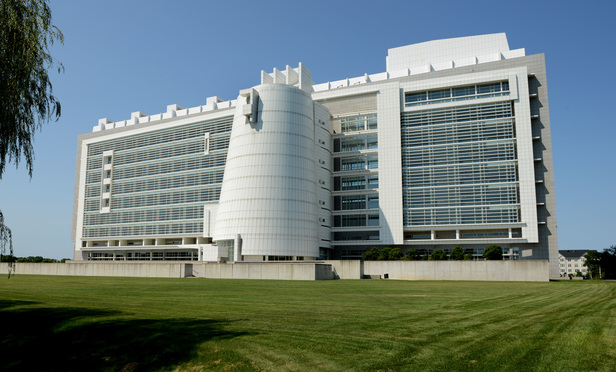 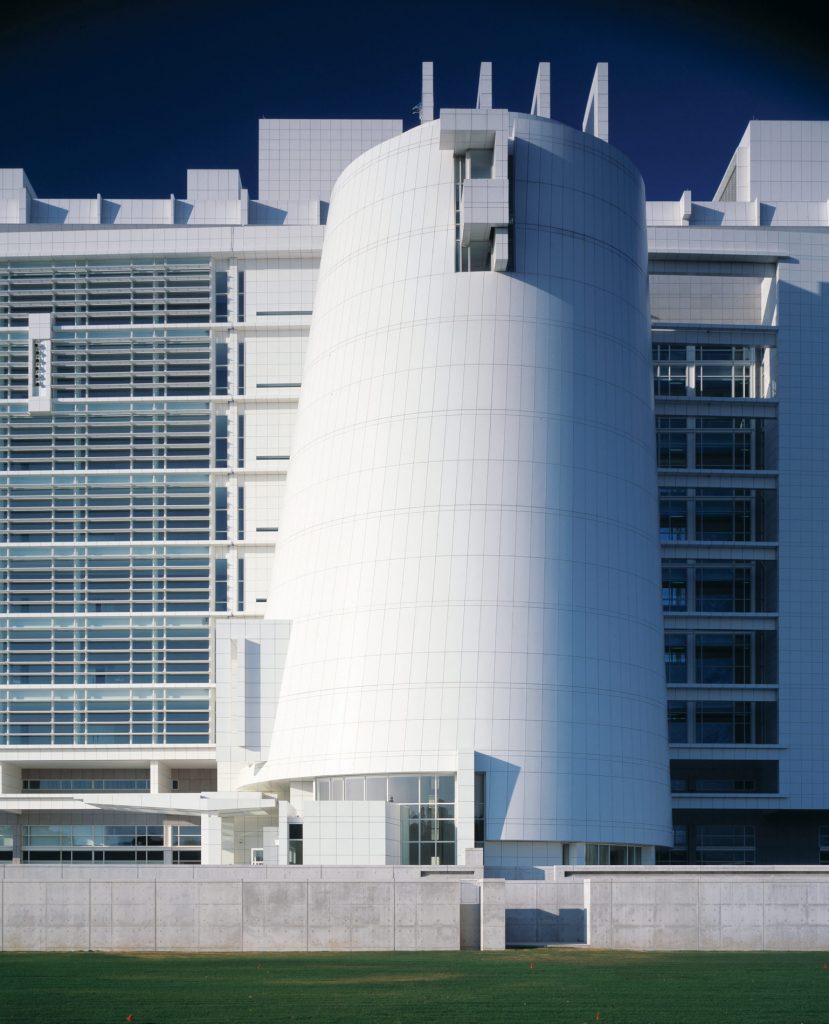 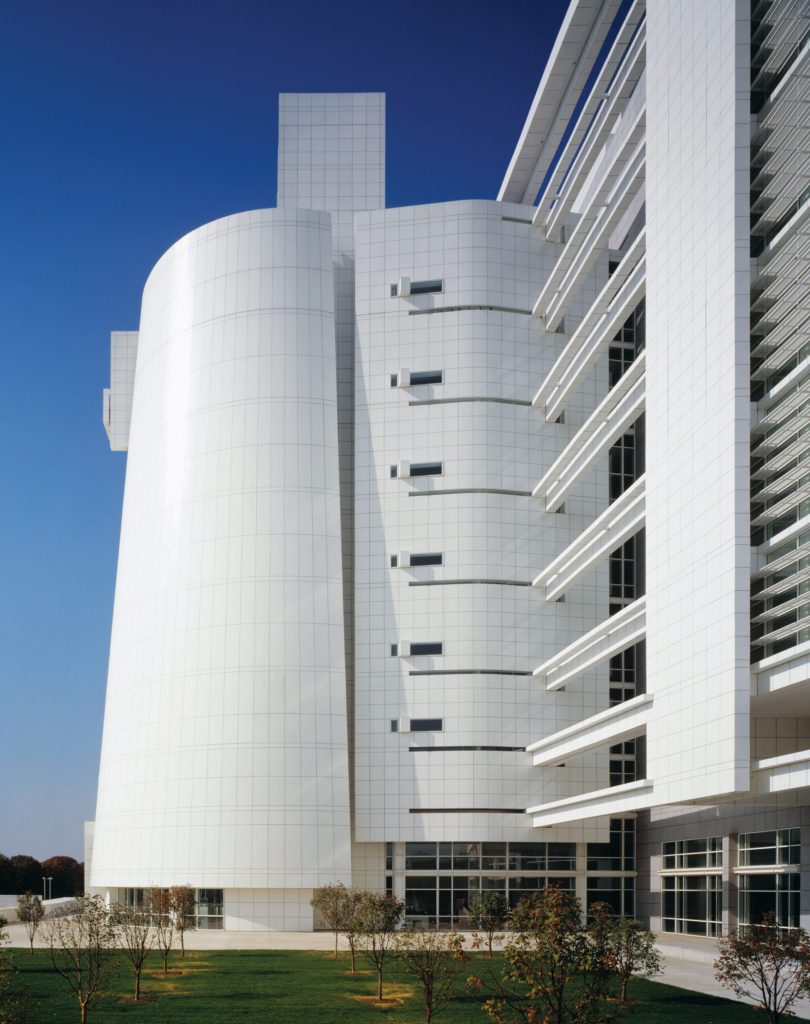 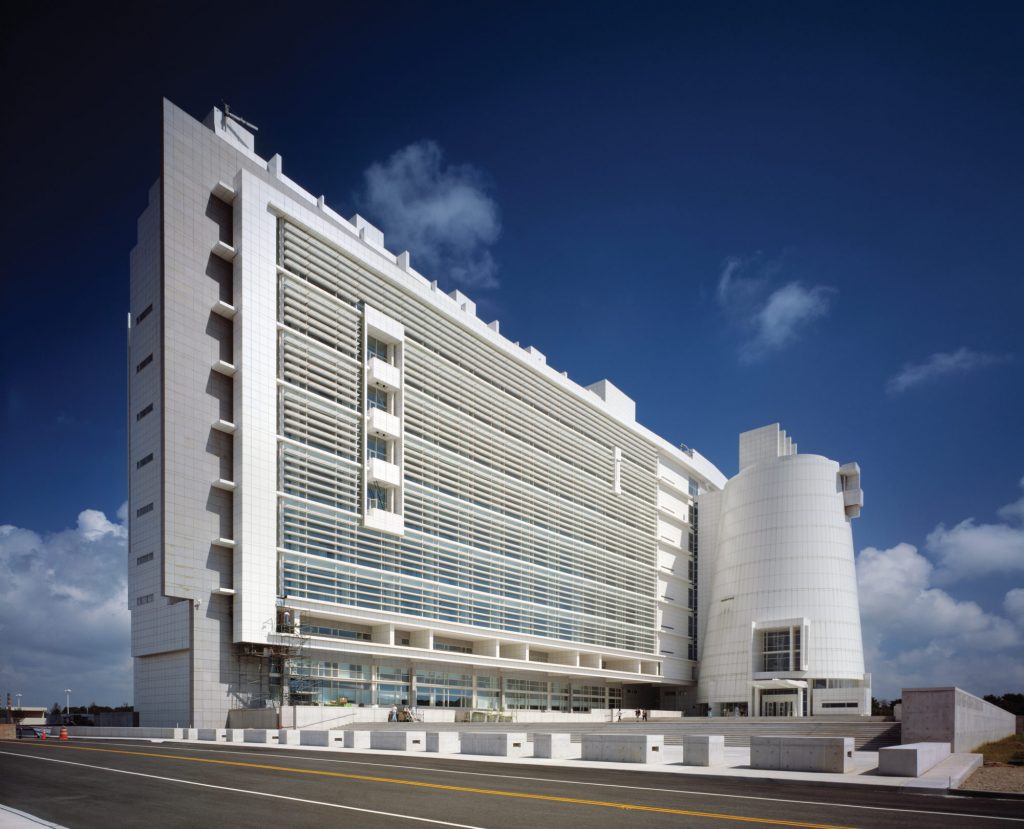 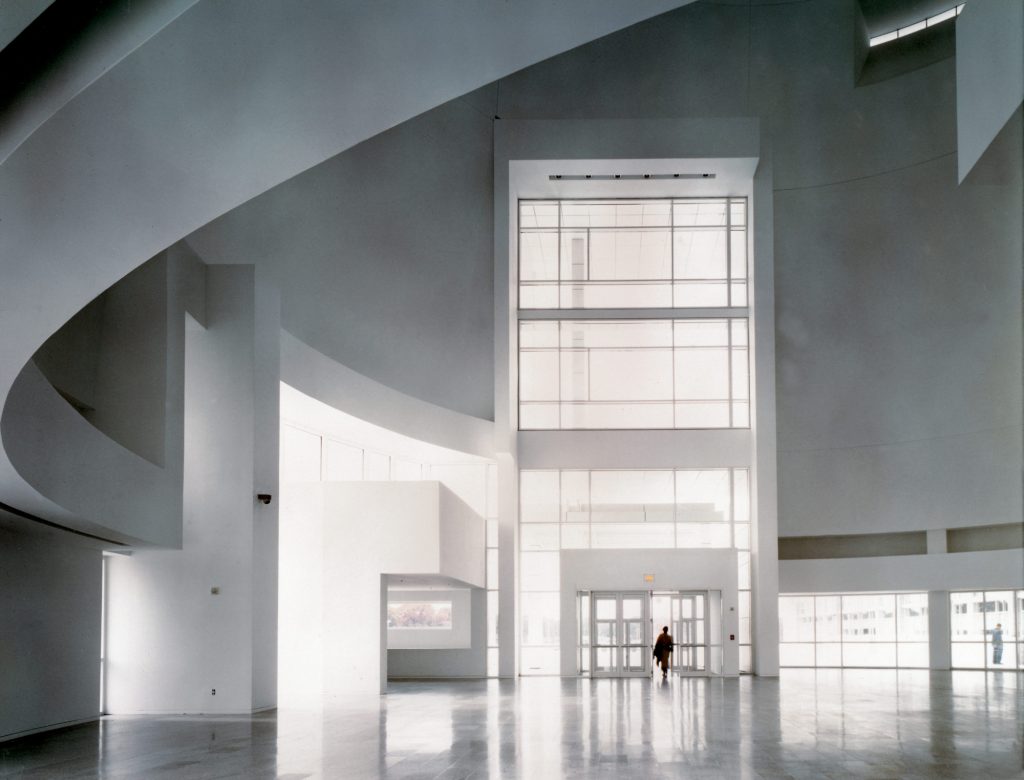 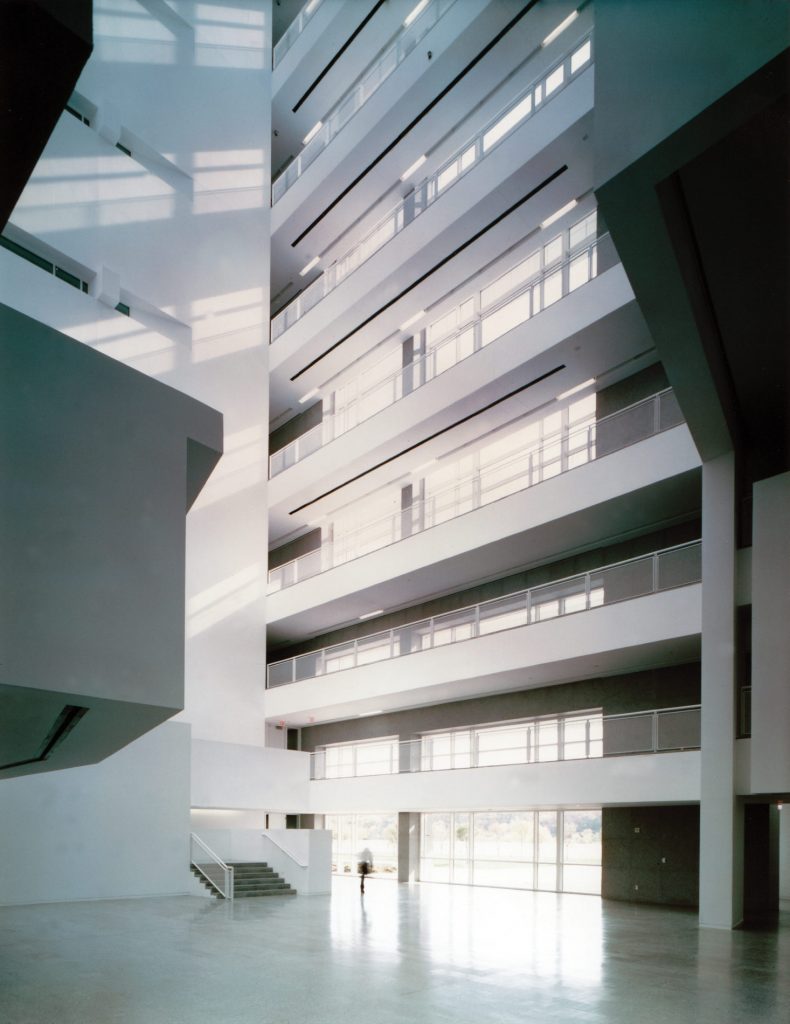 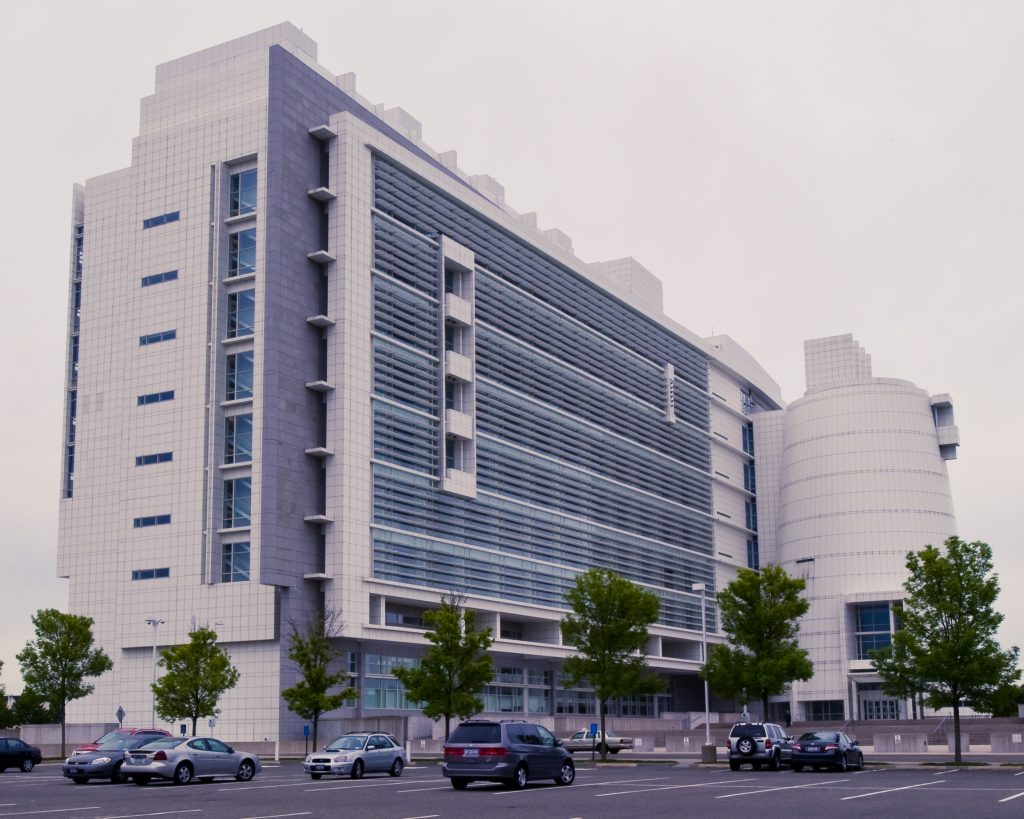 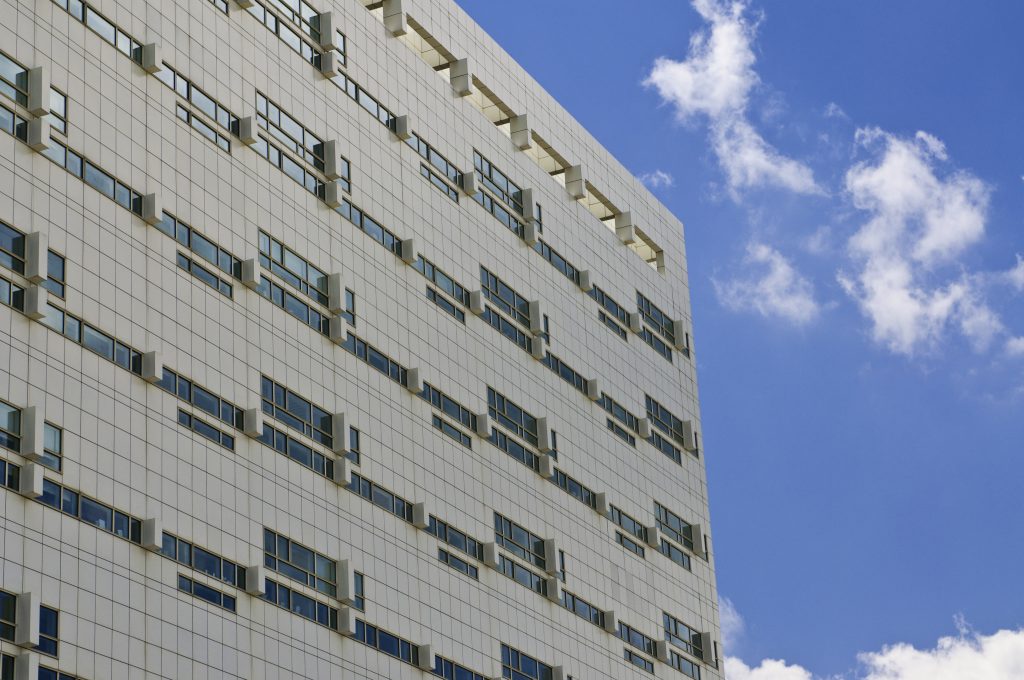 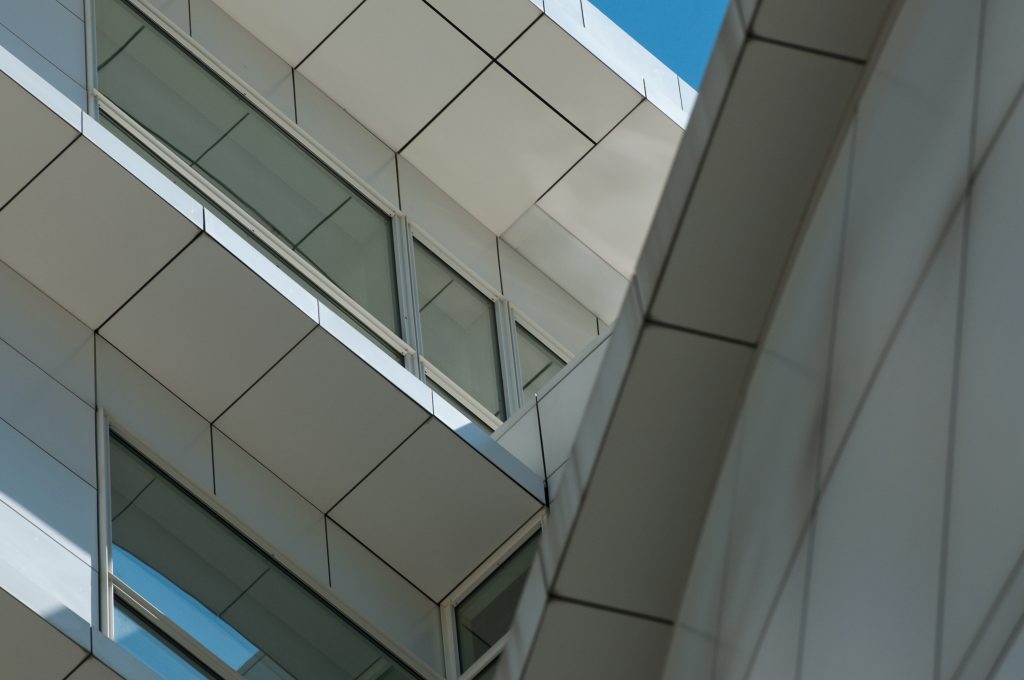 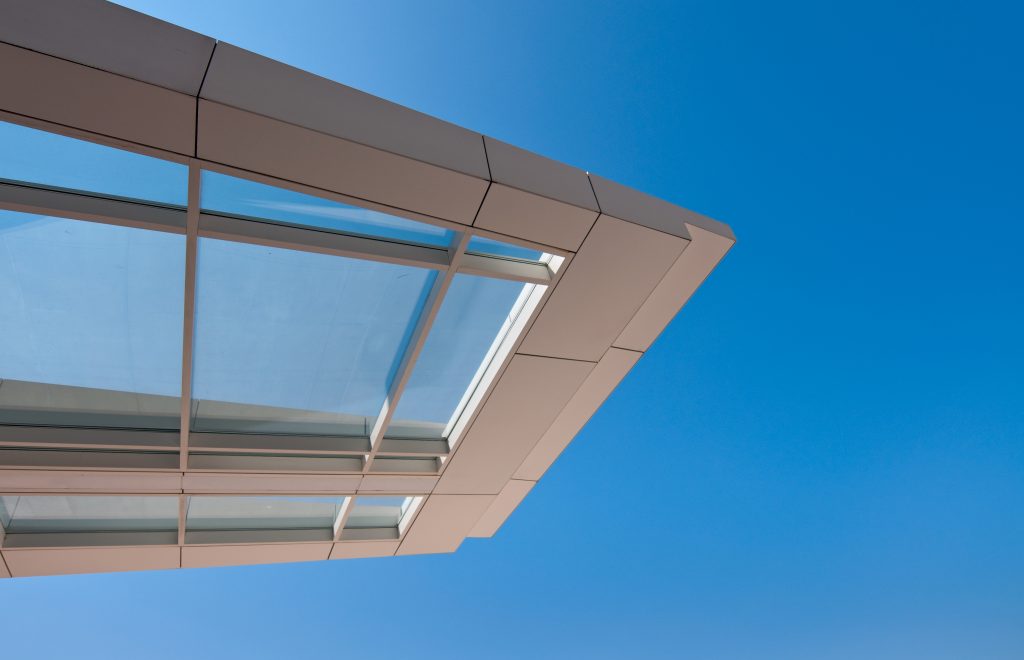 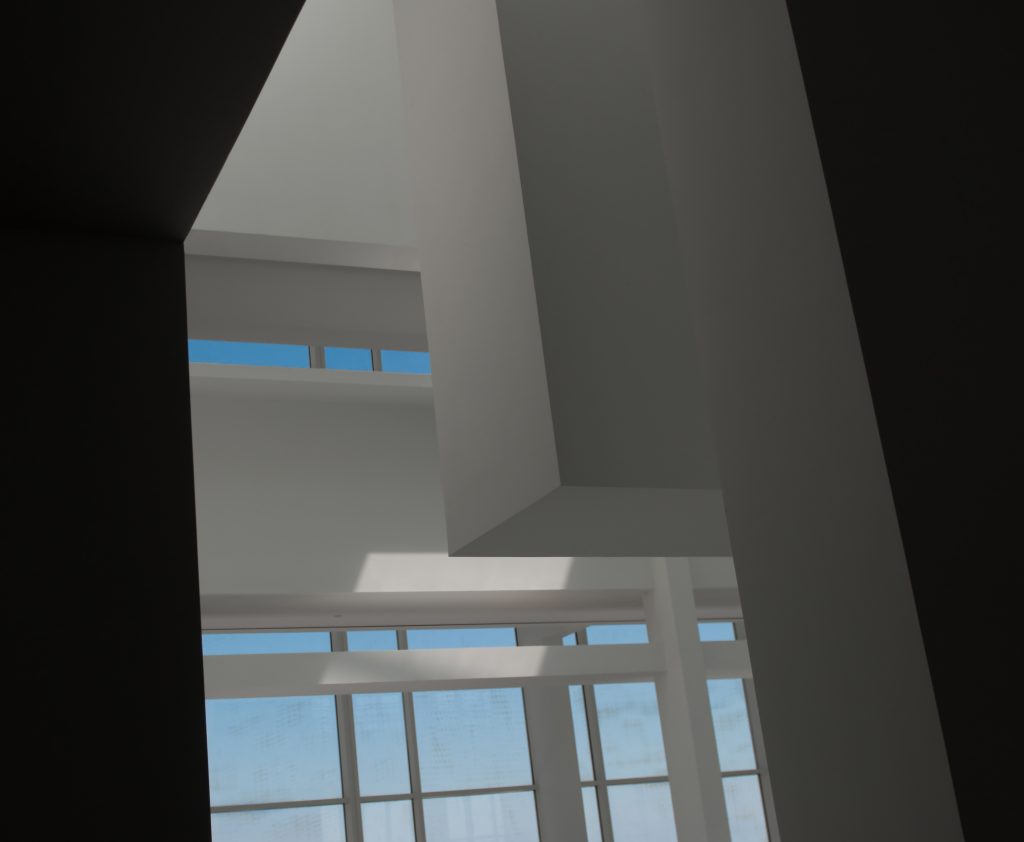 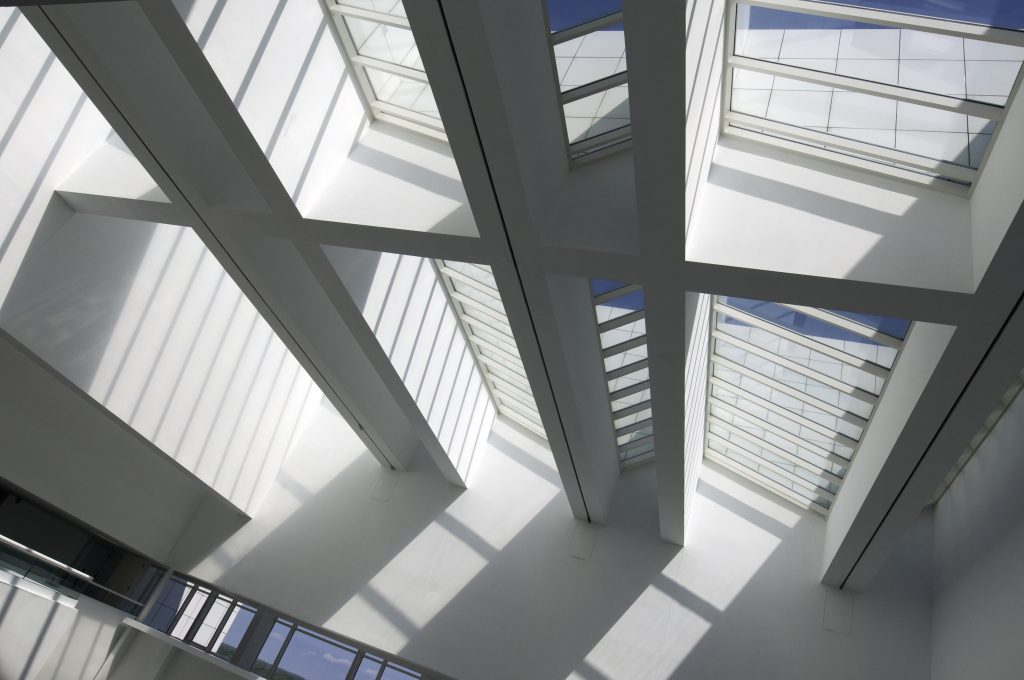 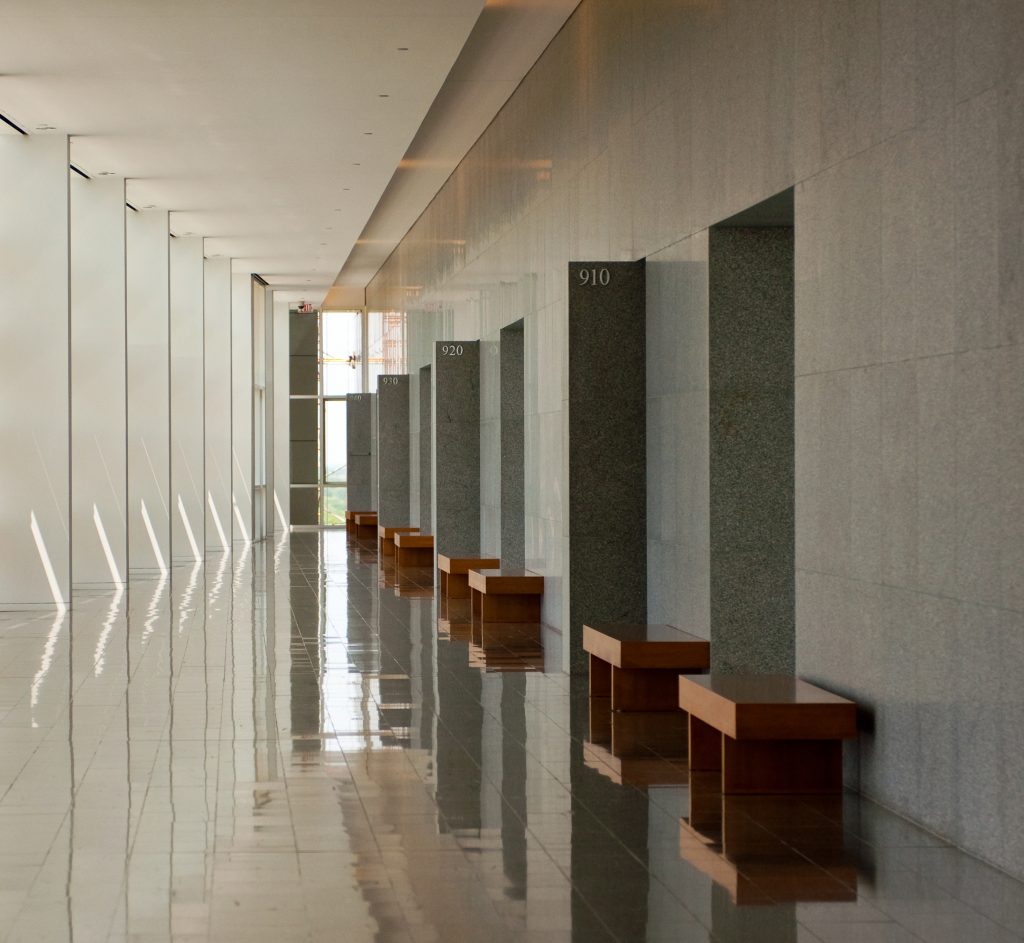 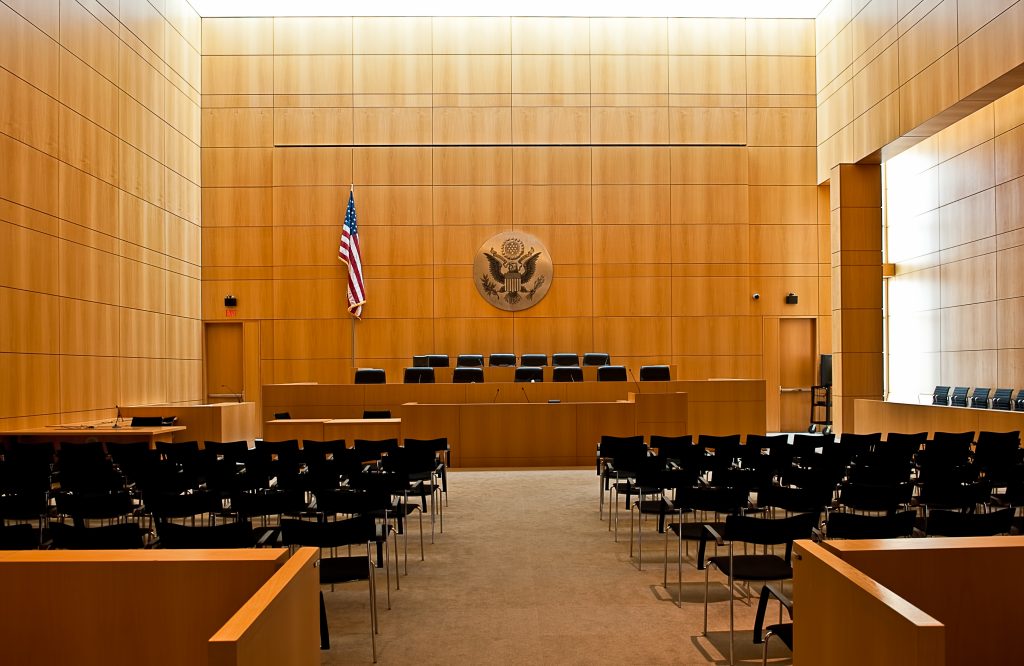 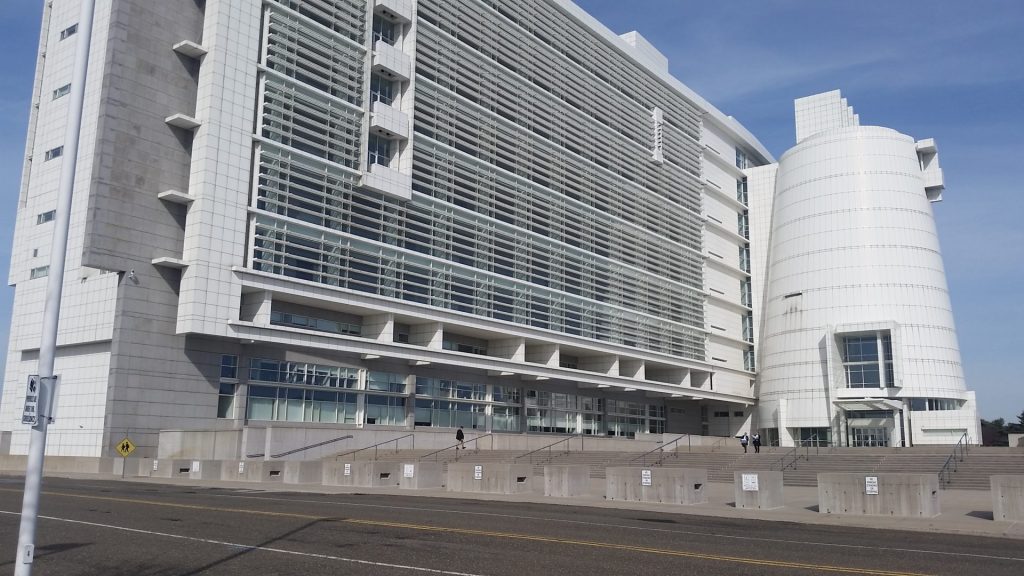 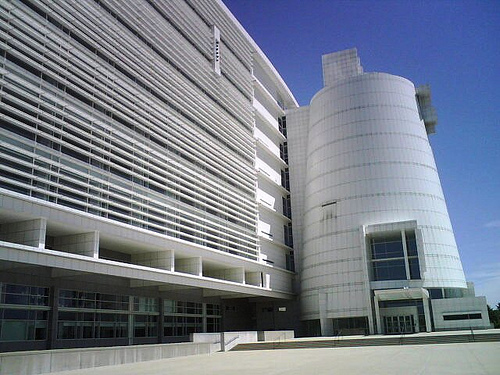 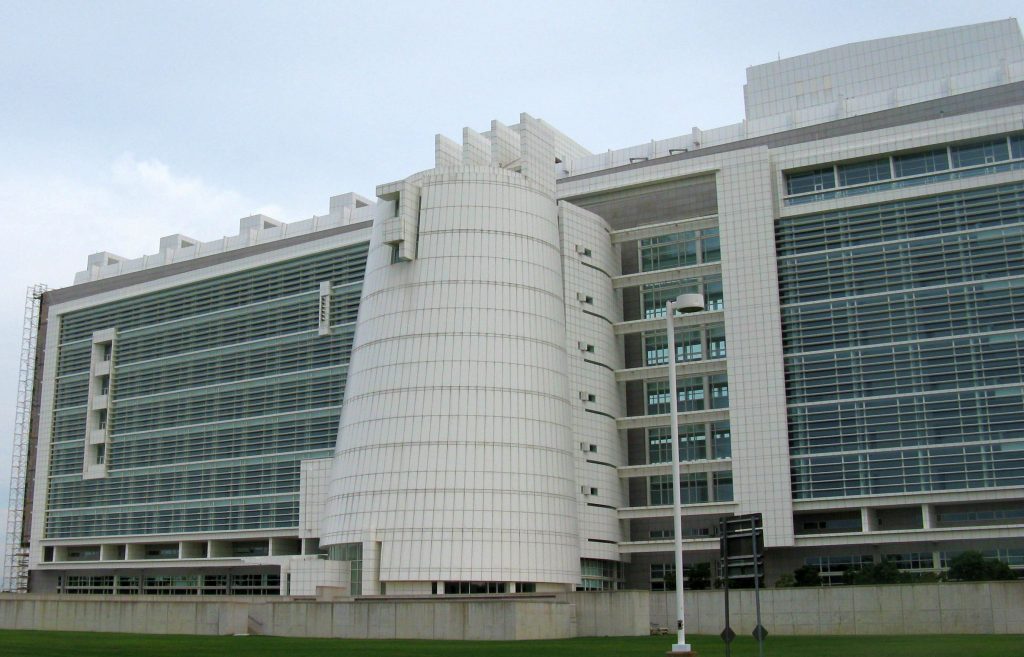 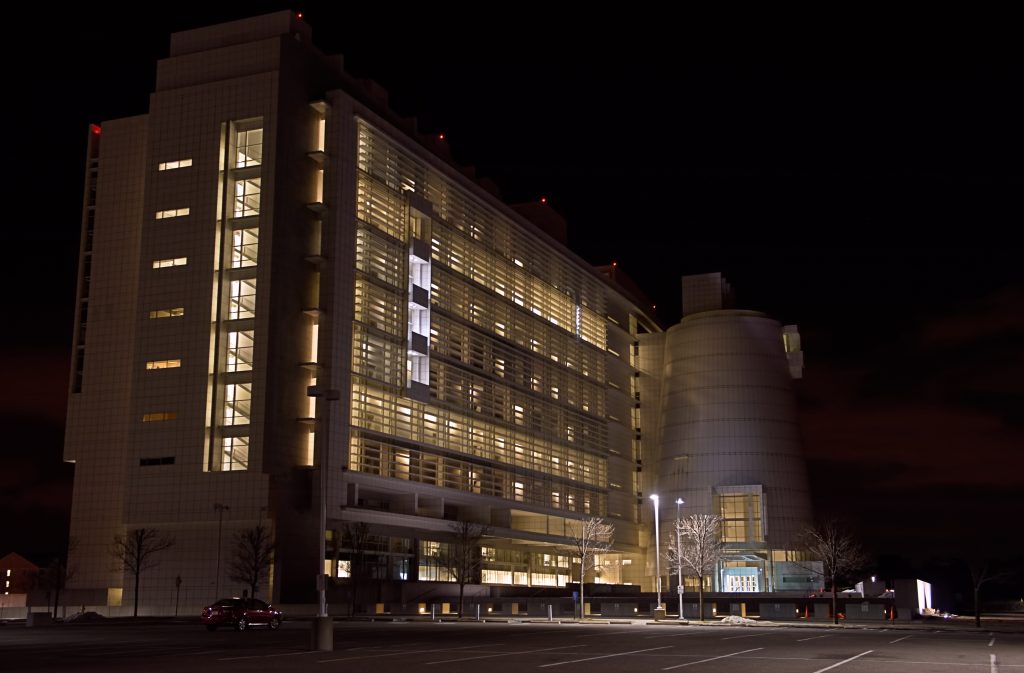