The Unite d’habitation of Marseille, the first commission received by Le Corbusier from the French State, is one of his most iconic projects and one of the basic reference points for any architect. Planning was begun immediately after the Second World War (1945-1946) and construction began in 1951. The work, of an unprecedented magnitude for its designer, was delayed by budgetary constraints and so it took five years to complete, rather than the 12 months initially forecast.

With his system of communal housing, Le Corbusier opposed de-urbanisation or, as he called it, the “mania of single-family houses”. In place of this, he advocated skyscrapers as units of integrated urban architecture which would achieve an exact, established function and occupy a pre-determined space. If the requirements for the services of community could be precisely conformed to, the dream of the garden-city would be achieved, as at the base of each skyscraper there would be enough space for a large green area.

The Unit, designed as a “vertical garden-city”, contrary to the construction of chalets, was planned on four different sites before finding its place on the Boulevard Michelet, Cité radieuse Le Corbusier 280, in the “elegant neighbourhoods”  of Marseille, France.

The project was Le Corbusier’s first opportunity to put in practice the theories of rate of scale which would precede “the Modulor”. At the same time, it constituted an innovative vision of the integration of a distribution system of goods and autonomous services, which would exist to support the housing unit, satisfying the needs of its residents and guaranteeing an autonomy of functionality in relation to the outside world. This self-sufficient state envisaged by Le Corbusier was the expression of a concern which began to surface in the 1920’s in his analyses of urban phenomena of distribution and circulation, which had begun to have an effect on modern society.

It was specifically planned to rehouse the victims of those neighbourhoods destroyed in the city and put in motion a principle whose development began with the “housing villa” and the “jagged blocks” of 1922. 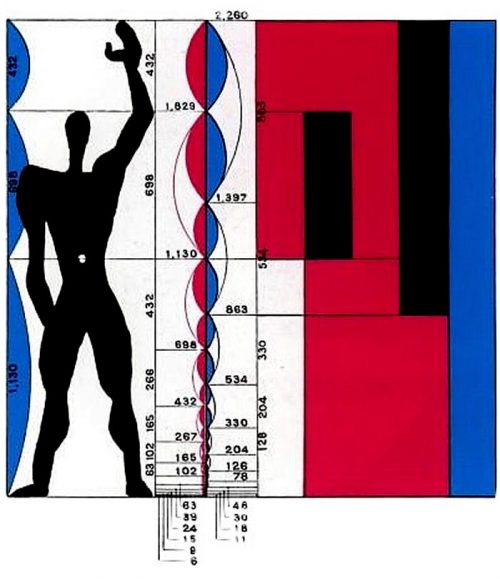 In 1950, Le Corbusier developed a module concept: a new system of proportions based on the Renaissance, which substitutes the traditional metric decimal system.

This measurement system was based on the measurements of the human being, entirely the opposite of the decimal system. In the words of Le Corbusier, “a machine, a piece of furniture or a newspaper are extensions of man. And architecture, and as a result every object created for man, must not only impact on a mental or emotional level but also on a more physical or bodily level”. Projects like the Marseille Housing Unit (1947-1952, France), the chapel at Ronchamp (1950-1954, France) and the city of Chandigarh in India are based on this modular system.

Conception of the idea

Le Corbusier’s housing units in Marseille, and later in Nantes, consolidated the concepts which had been developing around the idea of modern living.

The principles which formed it became an idea of architecture as a product of rationality; an instrument to delineate a social system as a system of reason. In it were incorporated principles of functionality and economy, acknowledging in the architecture a means of organising the urban space and offering improved possibilities for human groups. The creation of a new means of circulation, functional organisation, conception of a system of integrated relations: all these possibilities were used in a disciplined way and reflected the great desire to intervene in the architectural process and modern societies. 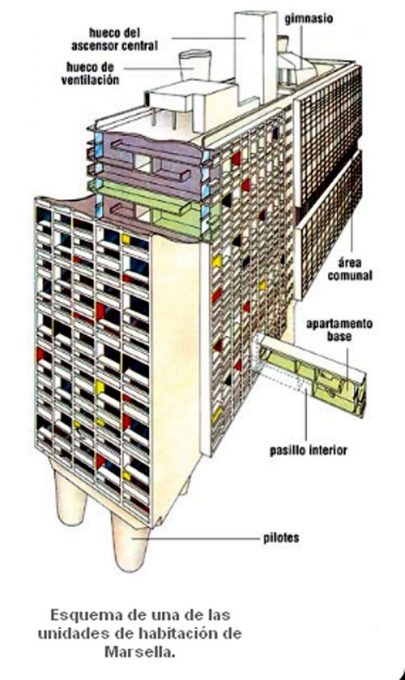 The Marseille Housing Units project is comprised of an architectural unit which houses 1600 people, in which the apartments are suitable for individual persons or urban centres.

The building is an enormous construction, 140 metres long, 24 metres wide and 56 metres tall. It allowed for an internal functioning of more than 26 independent services. Each floor contains 58 duplex apartments, accessible from a large internal corridor every three floors: “streets in the air”. Some apartments occupy the same floor as the corridor and one below, others the corridor and one above.

Inside the building, the 337 apartments cross one another in the huge, reinforced concrete framework. Halfway up, a two-floor commercial area extends 135 metres along the building, in which there also function rooms, a restaurant, a hotel, a laundry and other supply services.

Communal areas on the roof

Another interesting aspect of the housing unit consists of the use of the roof as a function centre; one of the spaces with the most vitality. It includes:

These services were located in order to take advantage of the conditions of visibility provided by the height of the building, between hills and the sea, thereby enriching the life experiences of the residents. 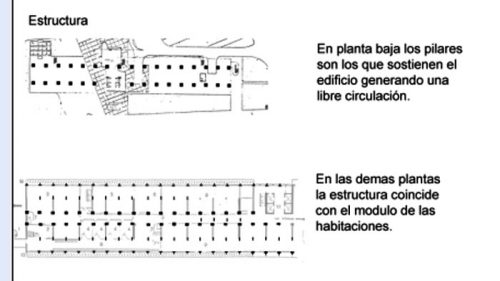 The structure is based on one block, raised on free-standing pillars, which allows for the whole ground space to be freed-up for gardens and leisure space, with its reinforced concrete structure acting like a shelf over the top.

On these stilts, the building was designed in a way which allows for a great permeability at ground level, which acts as a communication space between the exterior and interior and provides access to the vertical communications.

The cross-sections demonstrates how two apartment spaces with corridors are interconnected in a way which creates a central access corridor every three levels, optimising the circulation space.

These concepts would become part of the iconography of Le Corbusier, which thus demonstrated the need for a relationship between construction and the urban environment.

The materials used are reinforced concrete with a visible coating and glass, without decoration and without any elegance, indoors as well as out.

The façade, protected by canopies, was prefabricated with elements of the same material.