It is a building that Wright designed for Single Madison, which is characterized by its pointed roof that rises diagonally to the sky, like two hands together in an attitude of prayer. Like many of his works, lighting zenith is of great importance.

This building is located in the upper part of a plot in Shorewood Hills (Wisconsin) from where they can continue with the hearing the gentle slope to reach Lake Mendota located to the north.

In the design and distribution of the plant, Wright part of a plot formed by triangles. The geometry derived from the consistent use of angles at 60 degrees and 120 goes beyond being a simple mesh ordering to drive the development of the insurgents and from the deck as well as the expression of its symbolic content. “If the mean square integrity, if the area is universality, the triangle means aspiration. This is an attitude of prayer in construction,” said Wright, referring to his design. Using the figure of the triangle gets raise the cover expressing reverence without resorting to a bell, thus creating the most important reason in the image of the church: a large window of triangular floor, torn by rhythmically inclined wooden slats that allows the inner light uniformly from the north.

Under the idea of a unity this building is a social center, a summation of meeting places, education and worship, organized from a movement in spine of east-west direction.

Access from the park is by stairs located on the east wing, protected by the cantilever deck. Since we continue to access the main hall along a small, from which one can get a preview of the lake, or access to the reception, kitchen, offices, or toilets, which look to the south.

The office space in the vast nave of the church is divided into two areas: a lower-oriented south which houses the fireplace and some seats as a meeting hall of the faithful at the outlet of worship. This area is separated from the main means of a curtain of red, purple and green at the opening enables greater ability to stay up to 400 people. As is customary in other churches unit, this space has a multifunctional character as the chairs, specifically designed by Wright, can be removed and stored under the pulpit. It stands on a plinth of stone in the far north and it is the chorus, covered with a plane that focused the sound towards the faithful gathered. Beyond the main room in a westerly direction is the Sunday school, a group of townhouses classrooms whose walls are still the direction of the triangular plot and reported by a corridor from which you can go outdoors and enjoy the views. In this wing is added an appendix in a south-westerly direction, to accommodate the housing of the preacher.

The walls are load-bearing.

The walls are limestone, while the cover is a network of externally wood coated with sheets of copper and plaster on the inside. 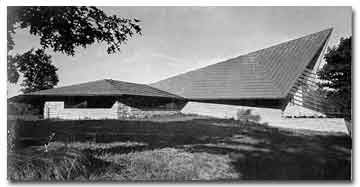 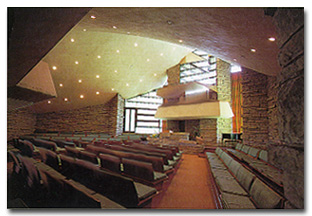 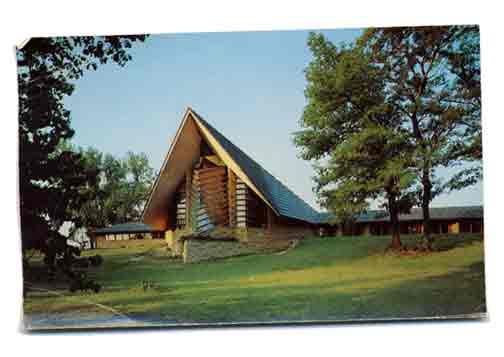