Osaka, with a population of 2.5 million inhabitants, is the second city of Japan. Almost completely destroyed by the bombing of the Second World War, this port city does not keep a historical heritage as important as Kyoto and Nara. On the contrary, its architecture, urbanism and impressive infrastructure are testimony to a modern and cosmopolitan city.

Very close to its main tributary, the Yodo River, is the district of Umeda, financial and commercial heart of the city. It stands a building: the Umeda Sky Building, designed by the architect Hiroshi Hara laureate. Hara-known internationally for his design of the Sapporo Dome stadium, home of the World Cup Korea-Japan 2002.

At the end of 1993 the construction Umeda Sky Building became the tallest building in Japan. Ha date of August 2007 took the seventh position in the ranking of the skyscrapers Japan.

The building was conceived under two concepts:

The first, give a character of great urban portico, similar to the Arc of Defense in Paris. Thanks to a technology research consistently erected two towers of 173 m in height, joined at the top by a terrace lookout. These towers are communicated by means of bridges, walkways and electric panoramic lifts, achieving an interesting dynamic, unlike most of the world’s tallest buildings, which can only be raised or lowered.

The second objective was to give the appearance of this building a floating city, which Hara ideological use of special crystals on top of it, which reflect the sky as the landscape outside, contrasting with the opaque ceramic its bottom. In this way, the building changes its appearance every day of the year, every hour of the day.
At the top of the buildings side, the architect Hara has shredded the edges of the same in a series of volumetric allegories that are a metaphor for the clouds in which “floats” the garden observatory.

Interestingly, but flattering at the same time: In the hall of the domestic viewpoint is a large scale model of Machu Picchu, with a tagline that reads “The ancient city floating of the Andes: Machu Picchu” ( “Andesu not Kodai kuuchuu toshi Machu Pichu “).

Suggesting that the adjective is given to the Inca citadel: above their qualities of “sacred”, “hidden”, “Lost” or others that we hear, it has preferred to highlight their ethers. It is interesting because the similarity between the Japanese have found this wonderful building supertecnológico and Peruvian citadel.

Another unique attraction in the first basement, a restaurant recreates a picturesque street that evokes the old Japan of the early twentieth century in the Showa era.

The lookout (The Floating Garden)

Corona building a platform of 54 by 54 meters, at its heart pierced by a glass ring, which seems to conjure up a space station.

This includes restaurants whose interiors are elegantly decorated and sober and meticulous gardening, called “the Garden Center-Floating” (the Floating Garden Observatory), which some critics have wanted to compare with the hanging gardens of Babylon.

Account as well as a lookout inside and outside terrace, which is accessed by escalators and glass from which you can see a spectacular panorama of the city of Osaka, especially the Yodo River.

A galaxy lights in the floor of the lookout

One aspect to highlight the lookout at the top ring of the building is the soil.

On the outside of the watchtower have been mixed into the cement floor of the small stones of reactive material to light violet simulating forms of comets, black holes, galaxies and all sorts of ways of expacio outside.

At nightfall focus pockets of violet light to the ground by making these small stones alike resulting in a wonderful spectacle of lights that make the visitor believe that is floating between the galaxies and stars from outer space.

The construction process was very interesting, since it was first built the towers side and then the observation deck (which had been assembled with separately) was hoisted by crane and embedded at the top of the building. 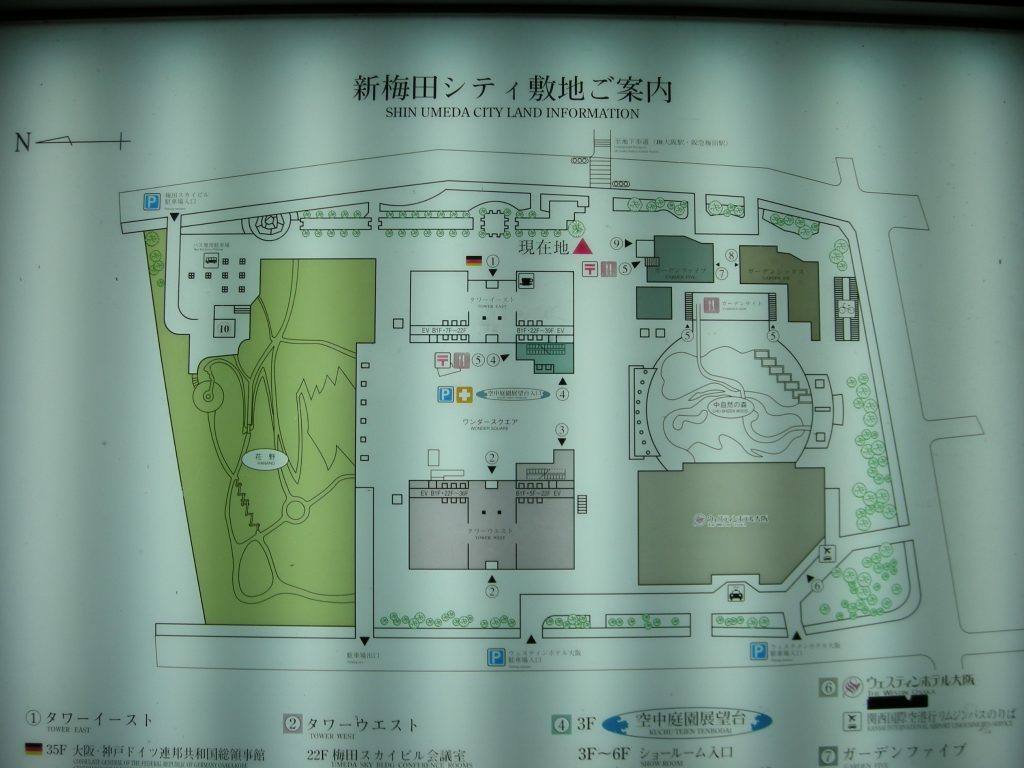 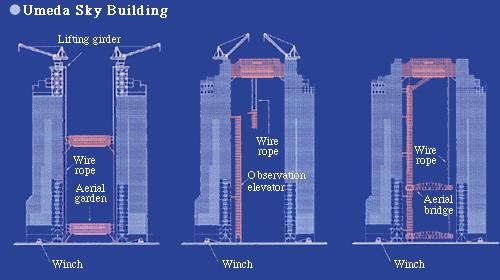 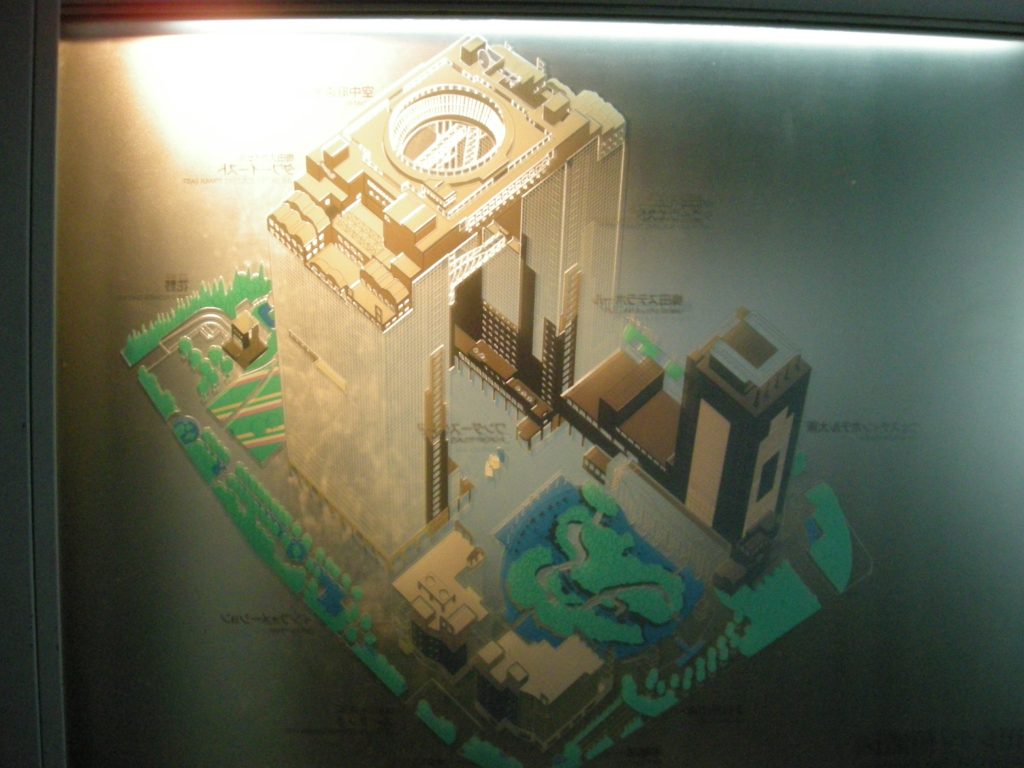 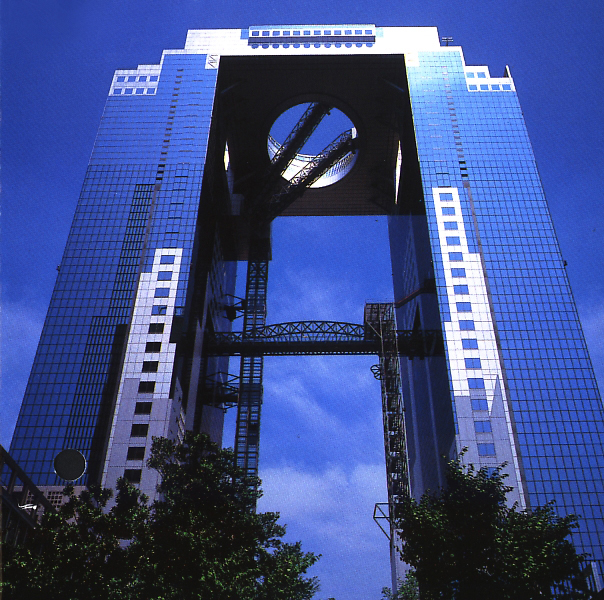 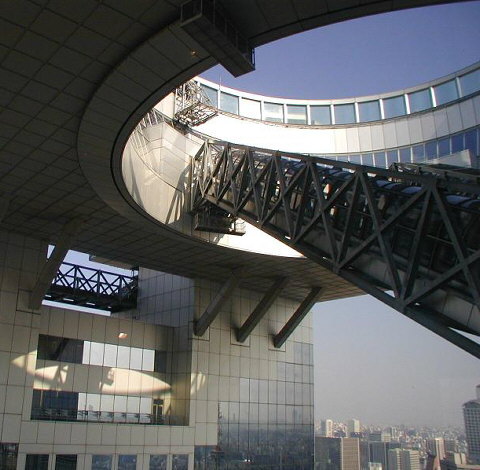 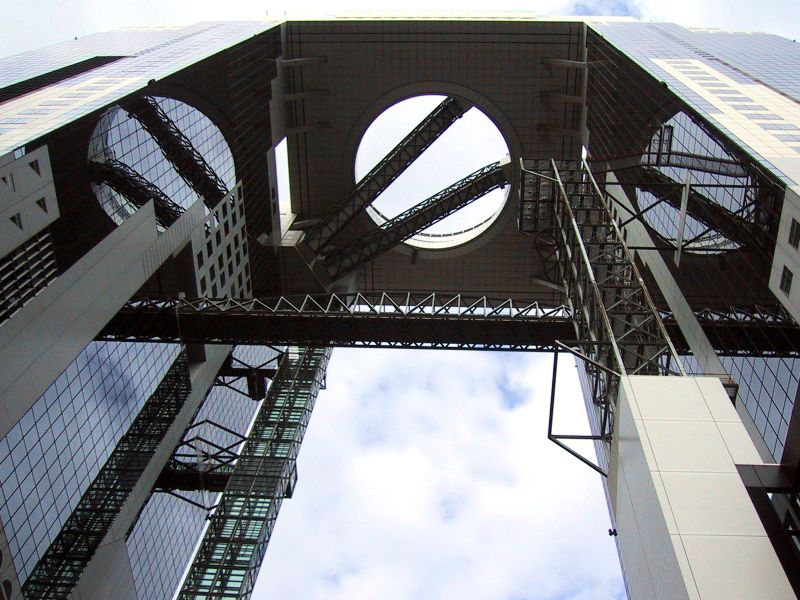 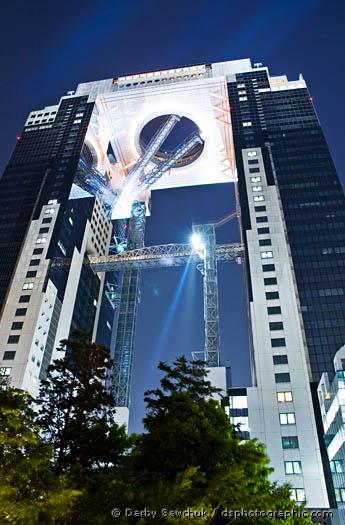 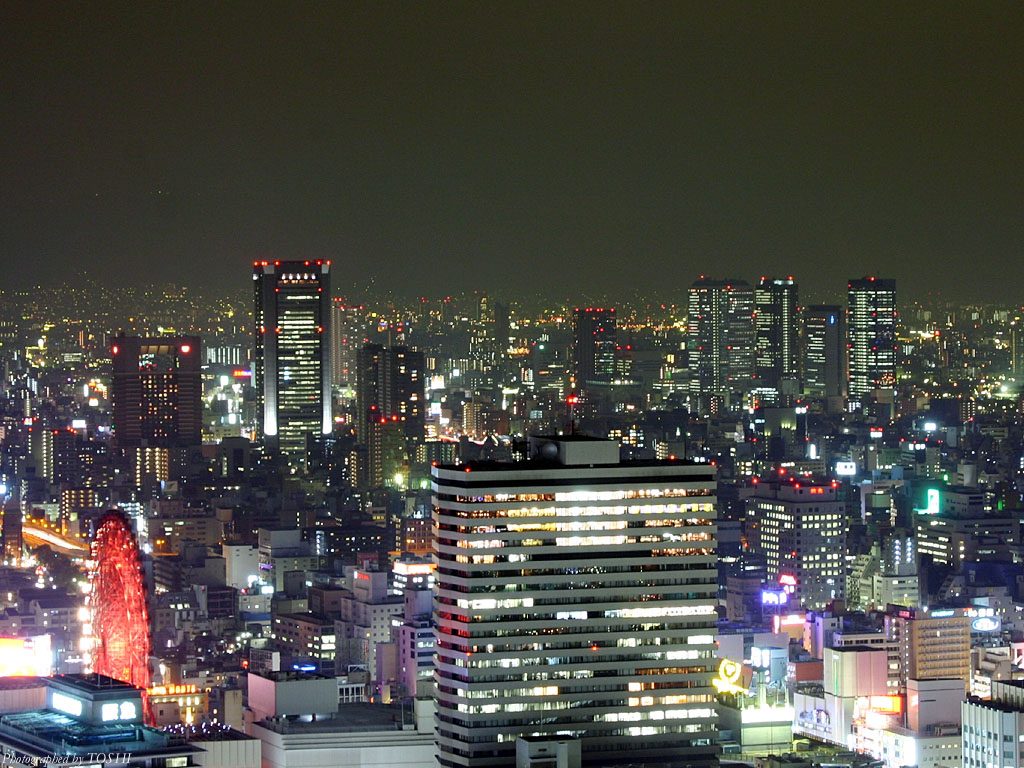 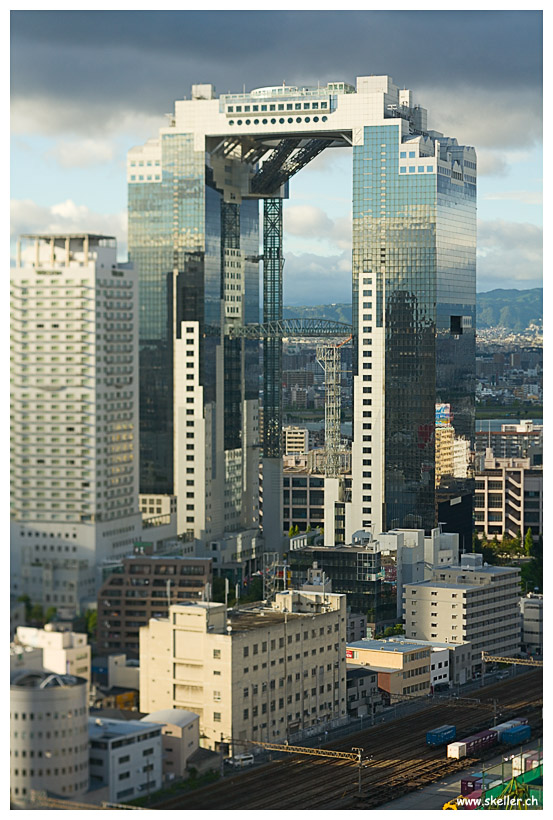 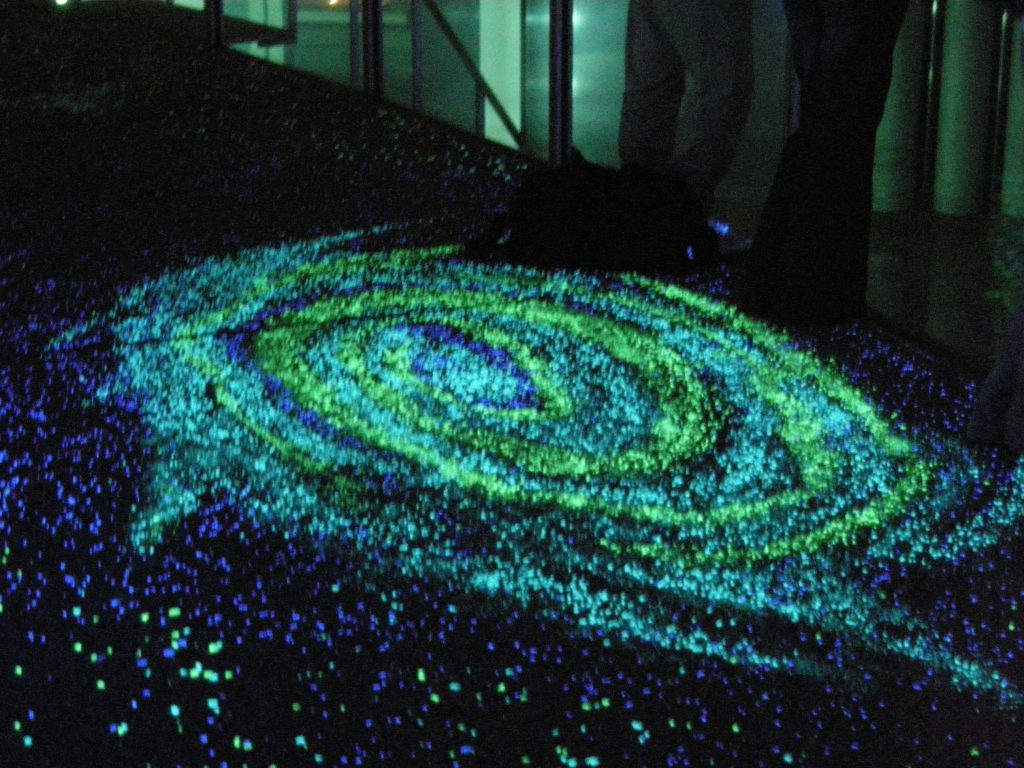 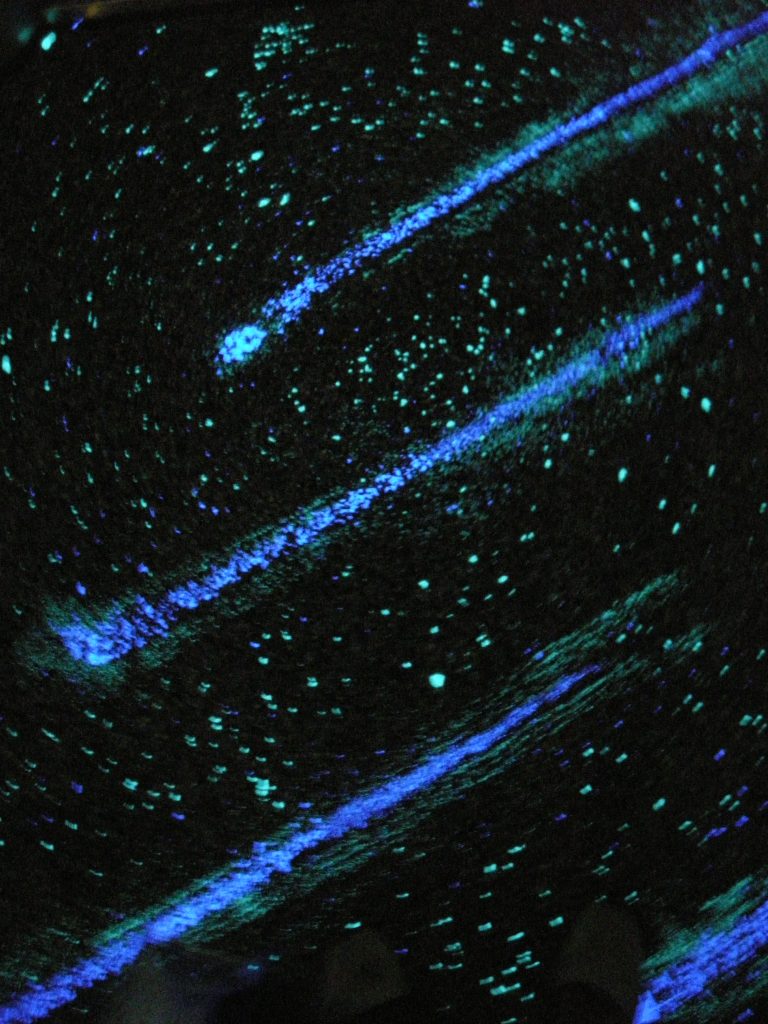 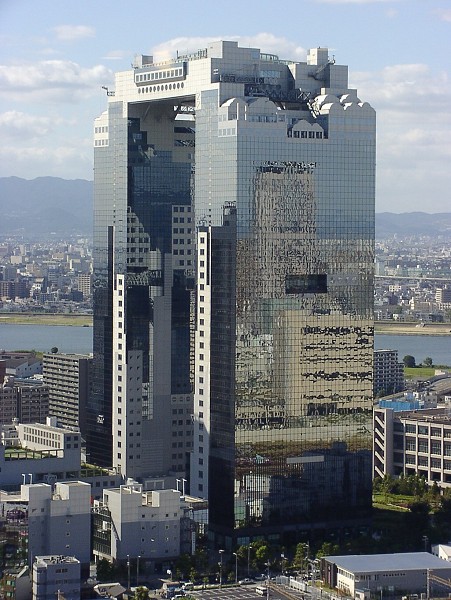