The Dada movement was founded by Tristan Tzara, the Romanian-born French writer whose real name was Samy Rosenstock, together with Hugo Ball, Hans Arp and André Breton. He was at the head of the Parisian avant-garde was a leading figure in the European art world. Tristan Tzara was who commissioned Adolf Loos the project to build a house in Paris.

In 1923 Loos was invited to participate in the Salon d’Automne in Paris, which increased his popularity within the Parisian avant-garde world. In August 1925 he was commissioned to design the house immediately canceling its registration Tzara in Vienna and establishing residence in the French capital. Through the house Tzara, Loos came into the circle of avant-garde writer, but received no orders waiting, they asked his advice and did projects, but at the time of the work was contracted to their French colleagues, indeed Tristan Tzara House is the only realization of Loos in France.

The property is located on Avenue Junot 15, 18th district of Paris, Montmartre, and stands out amidst the surrounding buildings for its refined design and simple lines. The plot on which was built with 10.6 meter wide façade facing the street and 17.6 meters long, has a slight slope.

Loos recreated minimalist architecture for an author Dadaist movement characterized by reveal or mock the bourgeois artist and his art. The architect arquitectua applies his concept of space, the “Concept Raumplan”, each room of the house must be adapted and decorated according to the function that is to be used, each architectural environment is a sensitive and honest background, decorated for its inhabitants, allowing them to take possession of them, without limits, “every interior space has a dimension of its own.”

In this work Loos fits mostly to the wishes and needs of its customers, especially in the development of indoor environments. The main facade is alien to this adaptation, since in this predominantly radical logic of language and a public image of simple volumes, symmetry, order and proportion.

According to this concept developed by Adolf Loos, every interior space has its own dimensions related to the nature and use that will be given, so as to create cells with different heights, but interconnected, achieving some autonomy from these, while maintaining visual and functional relationships. Thus, there is a ceiling height constant and small differences in levels with steps saved communicate functionally complementary areas. This spatial organization is what is known as Raumplan, and occurs almost exclusively on the main floor of the house.

5-storey façade is divided into two parts, the lower stone finish extends to the upper two floors and white reversed. These great walls that curve slightly inward, have relatively small windows that give a sculptural presence. In both parts are aligned two huge entrees like carved in stone, which help give the project an almost monumental. The continuity of the stone wall that becomes the garden façade manages to create the effect of continuity.

The lowest of these starters, at street level, shows two doors, under the upper balcony, the left leads to the garage and on the right is the main entrance to the house behind which there is a small hall the rising of a ladder that runs like a pit for the final drive to the atelier ¬ Owners.

The balcony is highlighted by a beam in concrete architrave seen that evokes archaic techniques, including the design and materials Loos exists as a narrow dual relationship “is a skin plaster and stone structure.”

The geometric composition of the main facade is rather elementary. It is divided by the materials, a square stone base and a white plaster on top. Surely this composition influenced the local conditions, the Avenue Junot leading to the hill of Montmartre crosses very steep terrain that forced a major containment field and solid foundations.

Separation by the materials of the various functions of the building, rental unit on the first floor and the house of the writer in the last two also serve as a resource Loos tactical lets cut two squares near perfect.

On the front “white” of the facade openings are located following a strict order. The element that dominates the composition is the large “empty” central balcony overlooking the street Junot, are restricted to the three lower openings of the lower level, placed in absolute bilateral symmetry with respect to the vertical axis.

To the radical logic of language of the facade contrasts with the “non sense” of the remaining sides of the building that expose a “functional writing”, each element of the role it plays, resulting dissonance and a degree of tentativeness deliverado apparent architectural language so different inside. The asymmetrical facade garden manages to create the effect that there are only three floors.

Inside the house Tzara, Loos continues its fascinating interplay of spaces, is the place where you actually force your specific architectural thinking. Dig and assembles environments of different heights within a unit volume.

Noting the original decoration is easy to see where it ends and begins the architectural decoration “householder” which comply with the limits imposed by the architect, the architect is for “the wall and muble”. It is a vacuum in the house who lives there has the right and duty of private fill your “bad taste”, Loos refers to esoteric tastes Tzara, who hung an African mask in the lounge along with various exotic items and paintings surrealist Hans Arp and Max Ernst.

The house is surprisingly staging, a collage of materials and sequence of spaces, balconies and terraces, rooms symmetric and asymmetric annexes.
The area Tristan Tzara housing starts on the third floor and extends throughout the building.

On this floor is the department that is dedicated to rent, with a large balcony on the avenue. Access is via a covered patio that is located on the front side of the garden, where stairs lead down to the department.

The main staircase leads not on the first floor but direct access to the second floor, a lobby that is born in the staircase leading to the rest of the house, a dressing room and cellar. On one side of this second tier are the kitchens of the two houses.

The third floor is for really the first owner of the house. This plant pricipal, the main floor of the house hosts a living room at a level slightly above the rest of the plant, with Junot Avenue balcony and fireplace, library, lounge for the ladies and a pantry, recent environments a level slightly lower than the living. In this plant heights game make the walls acquire a specially marked tectonic character through the pillars, pilasters and entrees murals.

At the fourth level are the bedrooms with a terrace

At this level was projected another great plant floor but never completed fully.

Like the lower base of the facade facing the street, the retaining walls of the hillside are exposed stone. The two front doors are wood framed with small opaque glass also crown the top.

While in Viennese homes Loos used to coat the walls with oak beams and leave in his Parisian apartment is limited only to the lining of the pillars with plywood bolted plates. The walls and ceilings were plastered and painted with color.

The living room fireplace has a marble front, and soils were combined wood and ceramic. 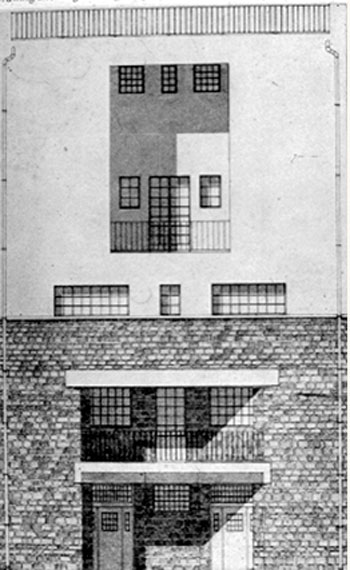 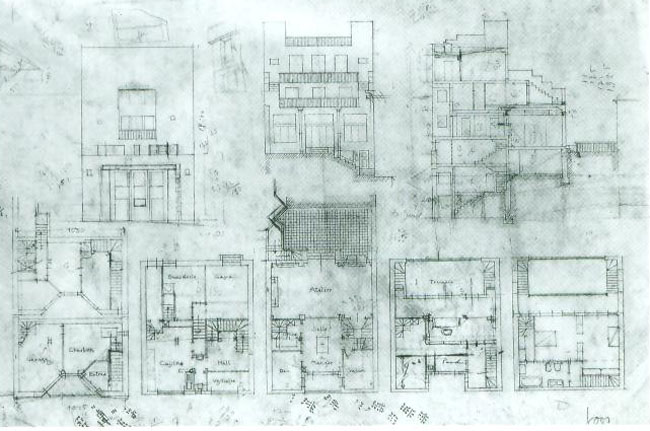 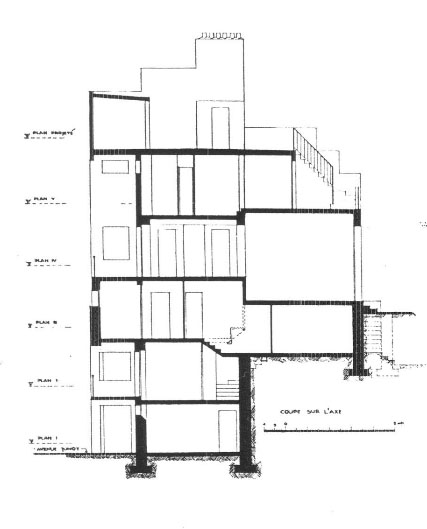 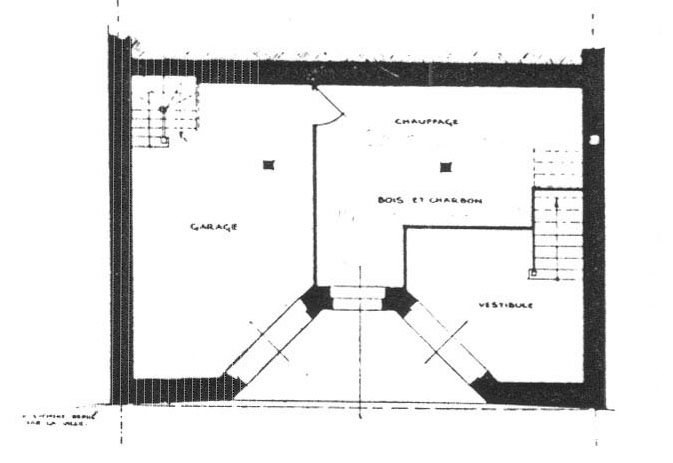 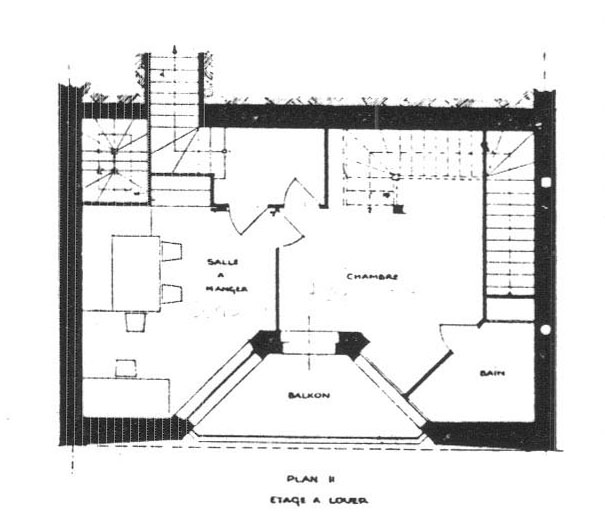 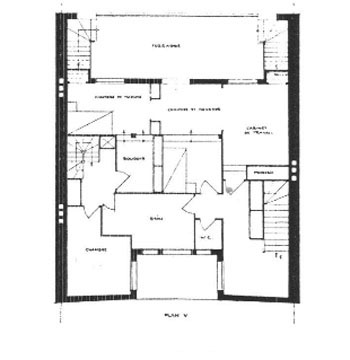 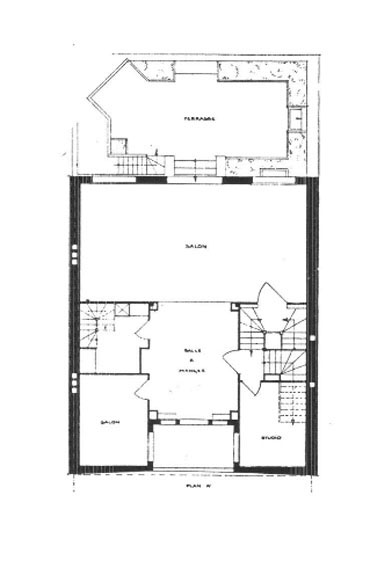 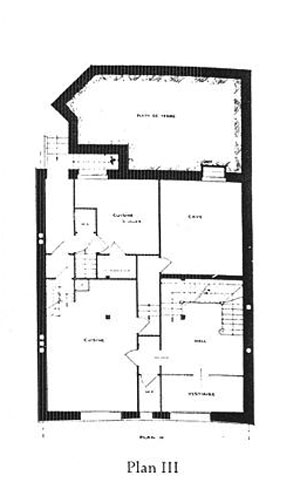 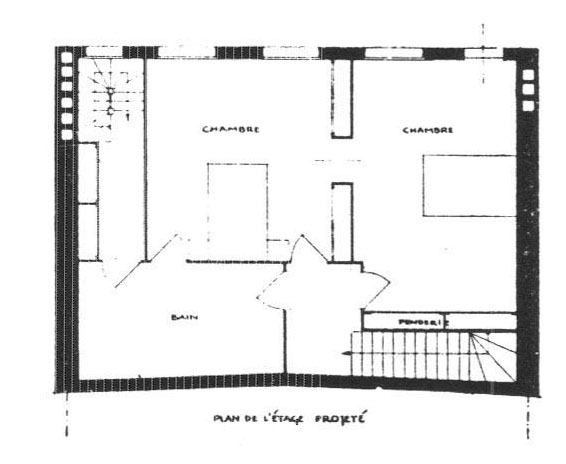 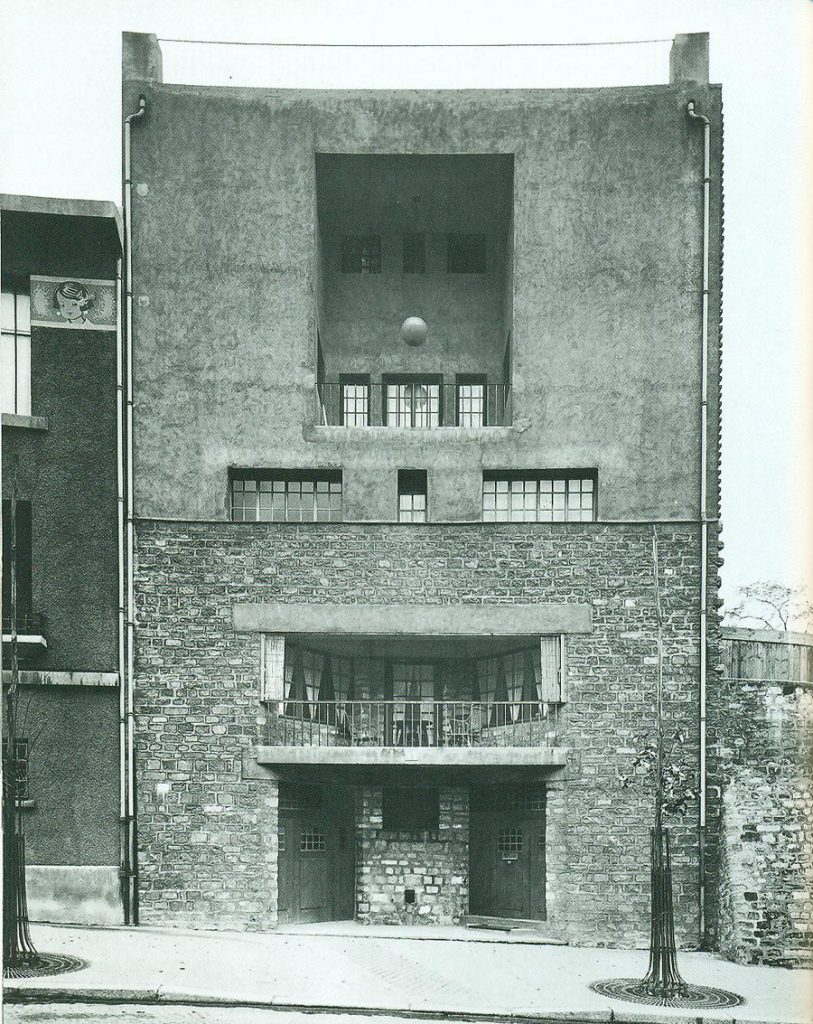 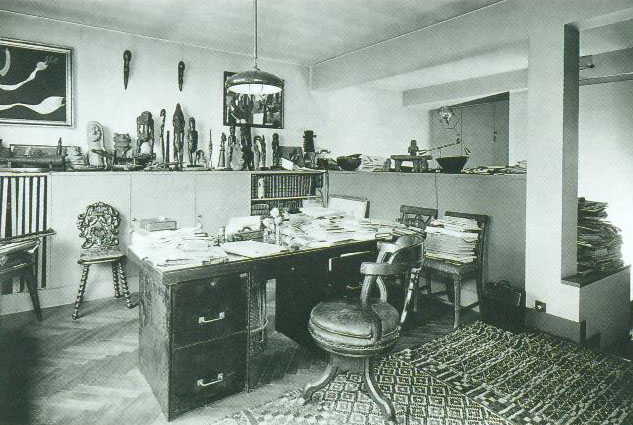 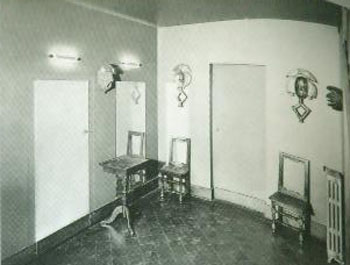 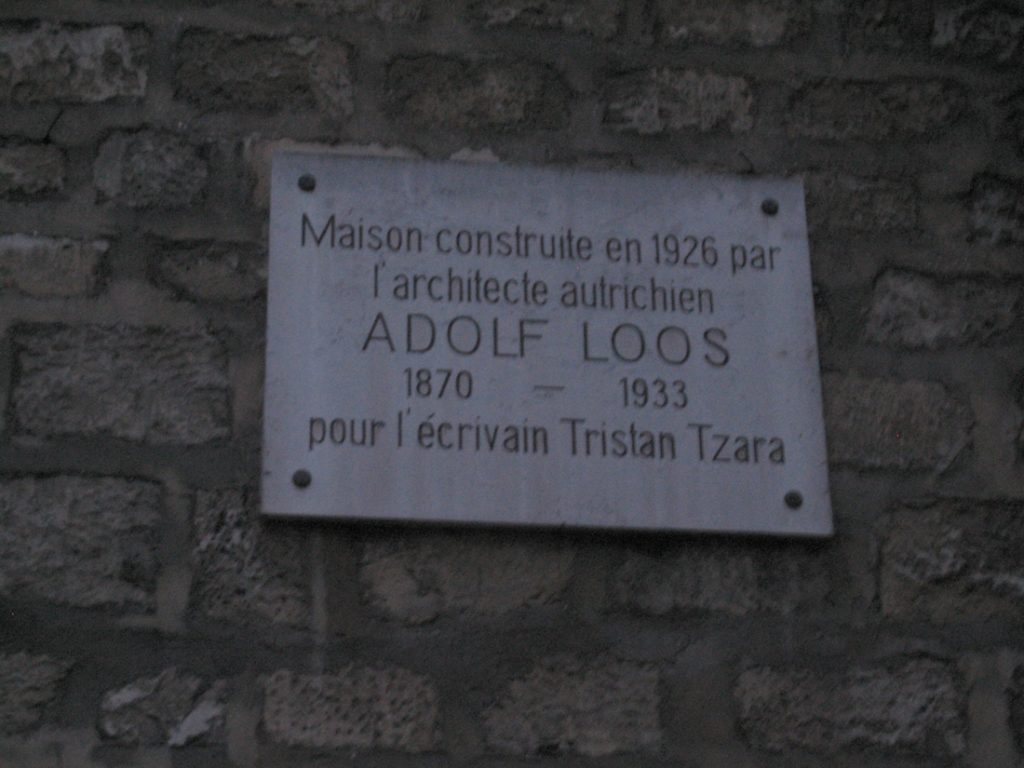 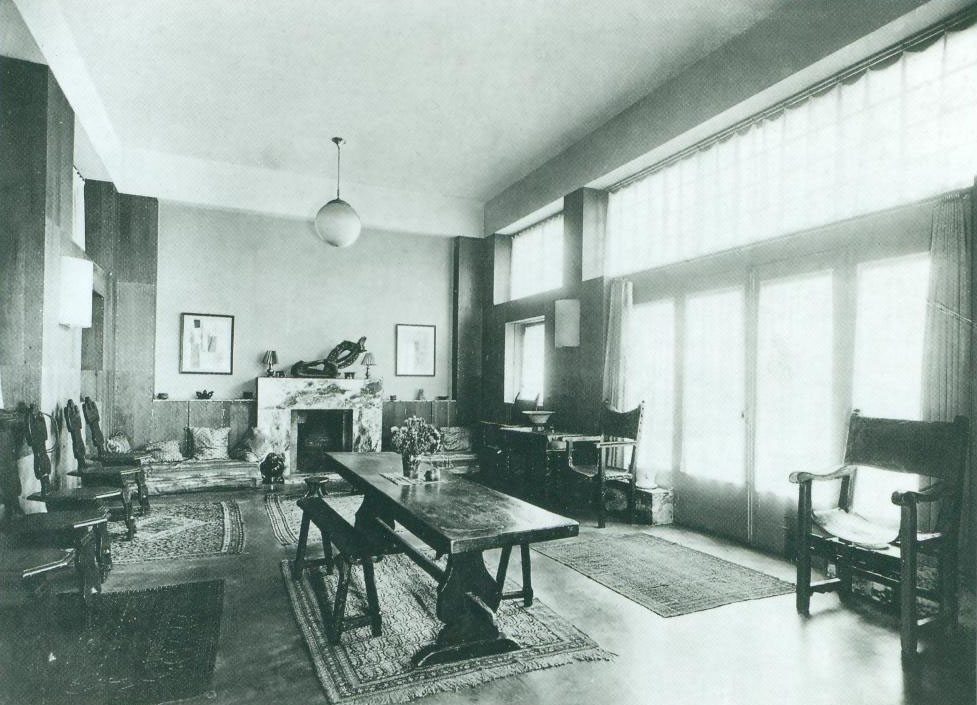 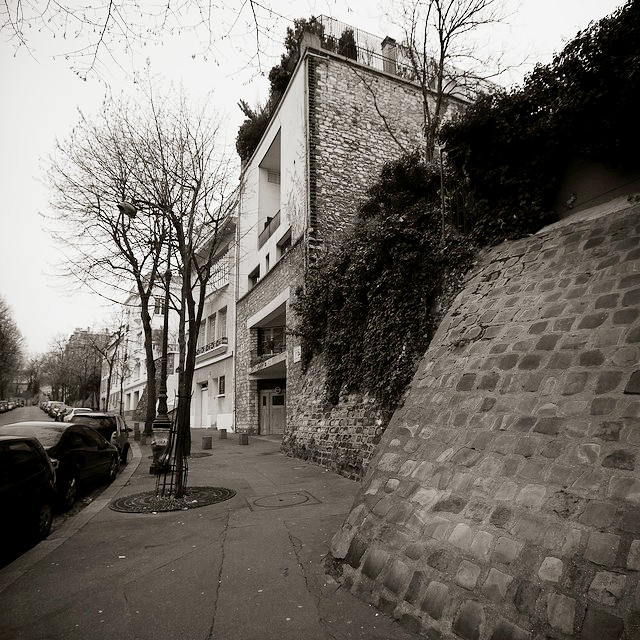 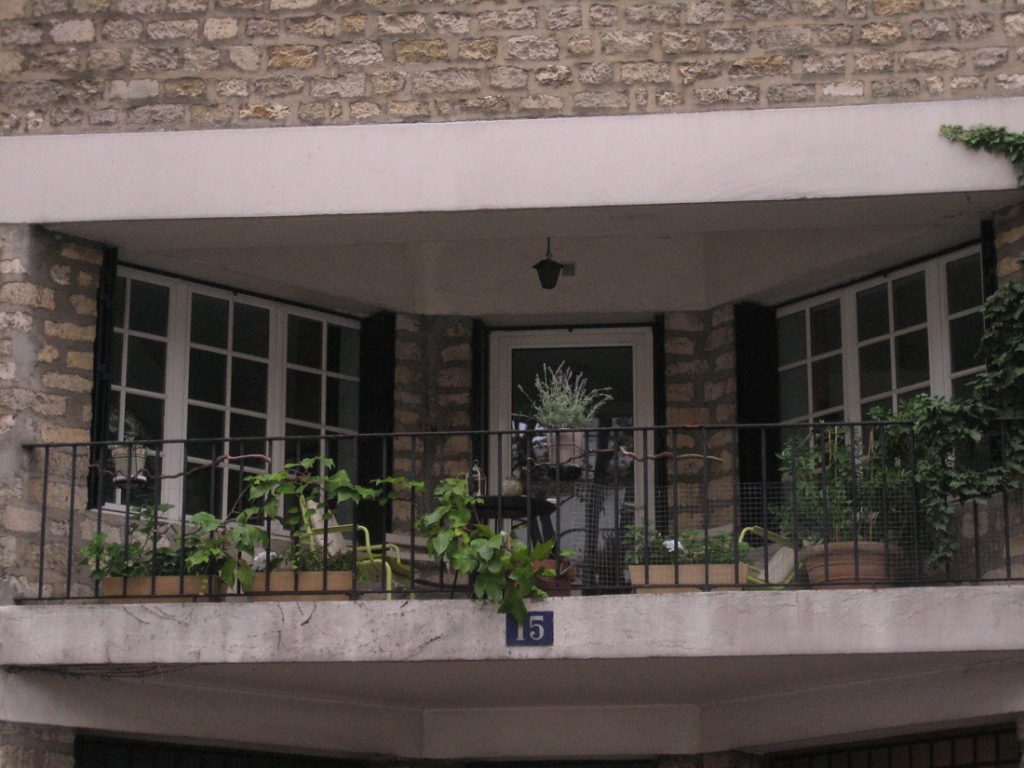 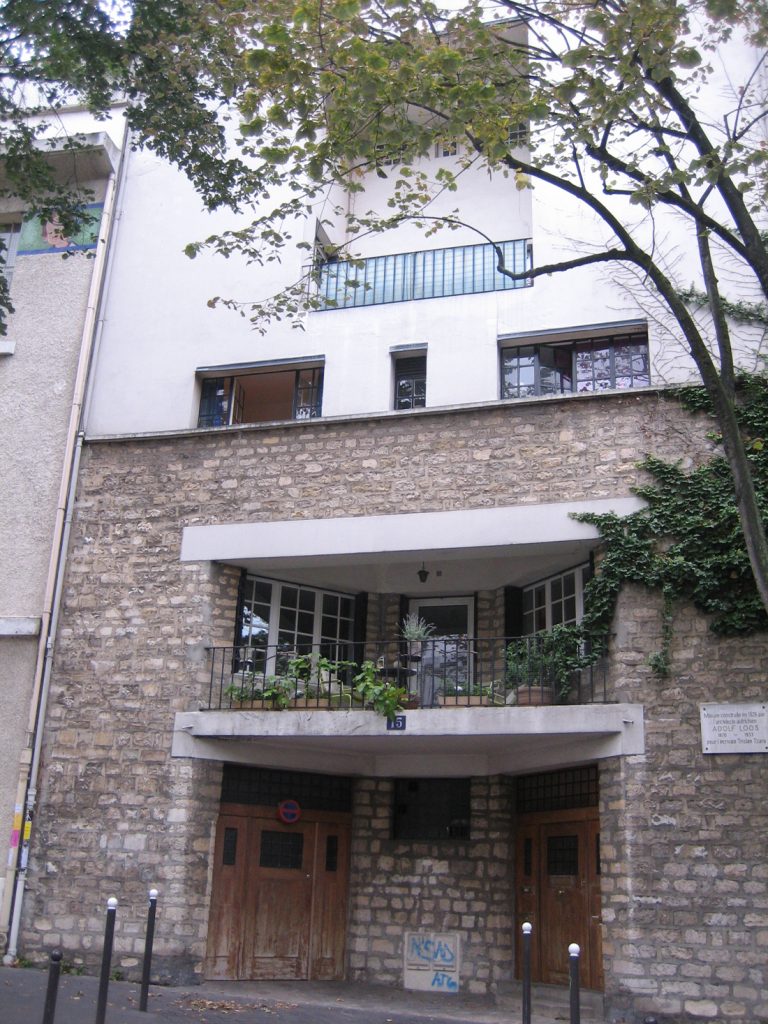 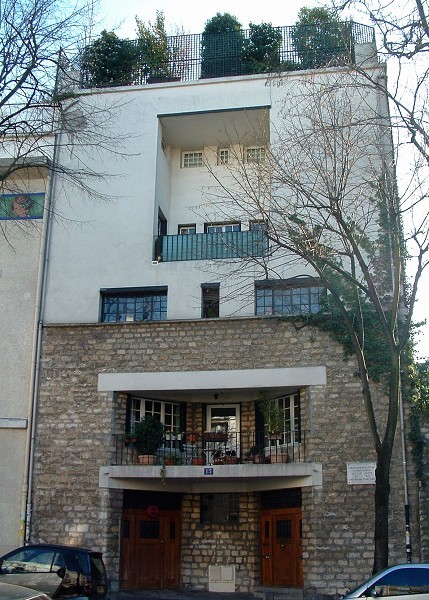 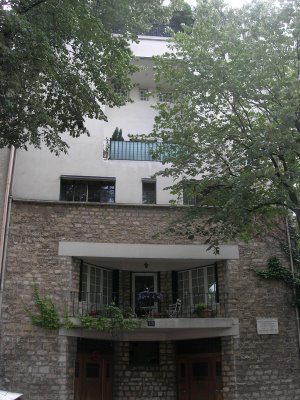 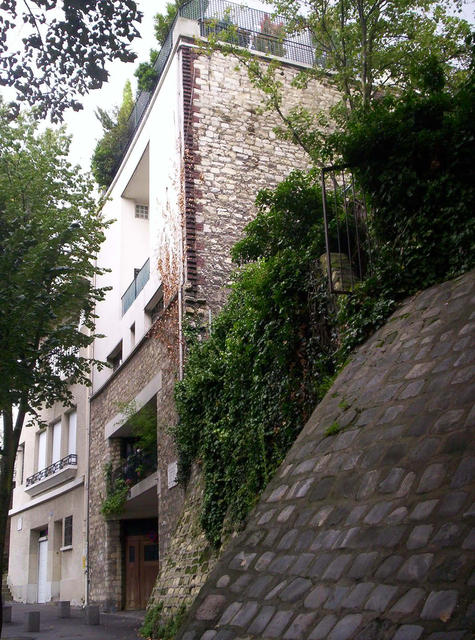 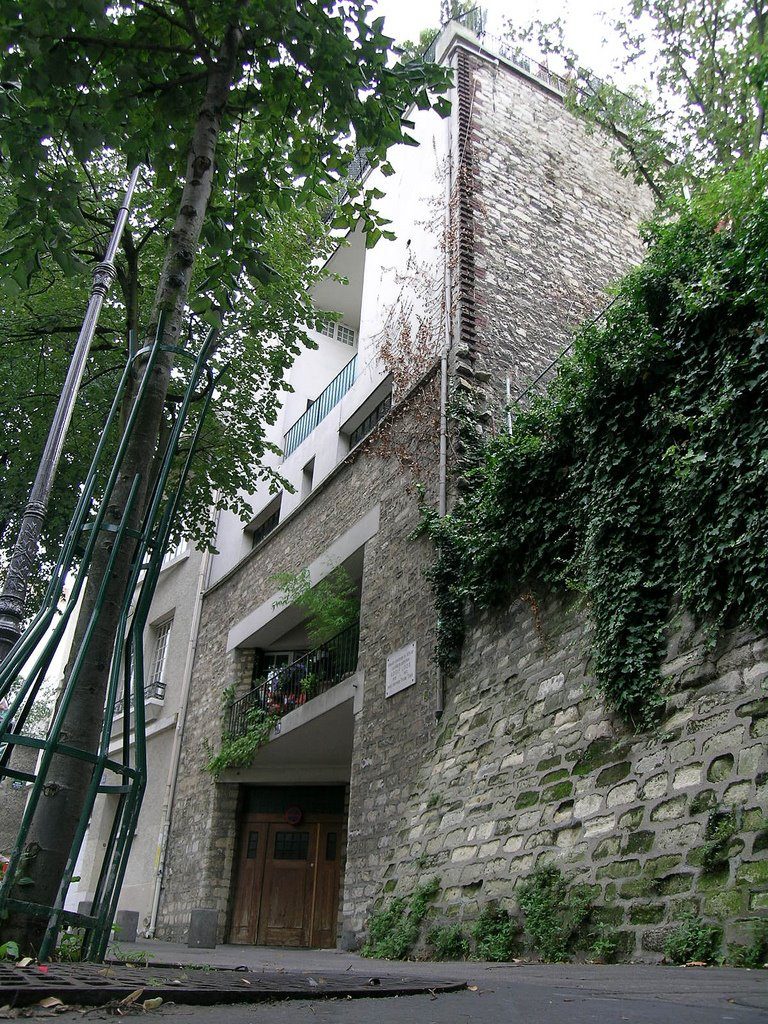 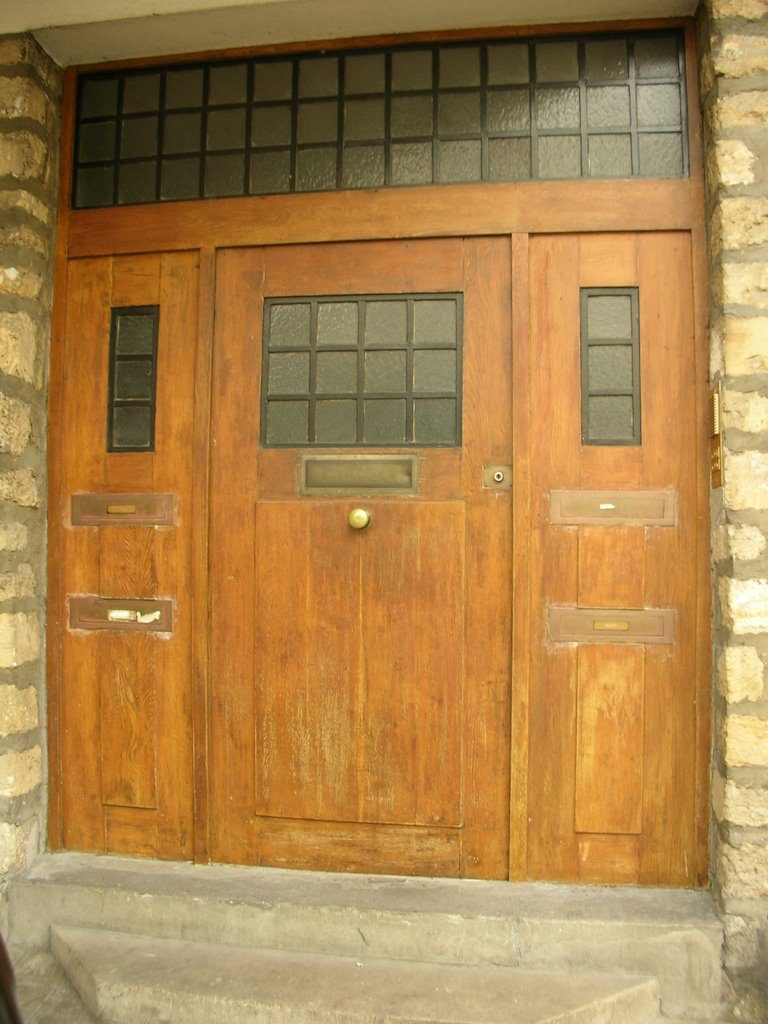 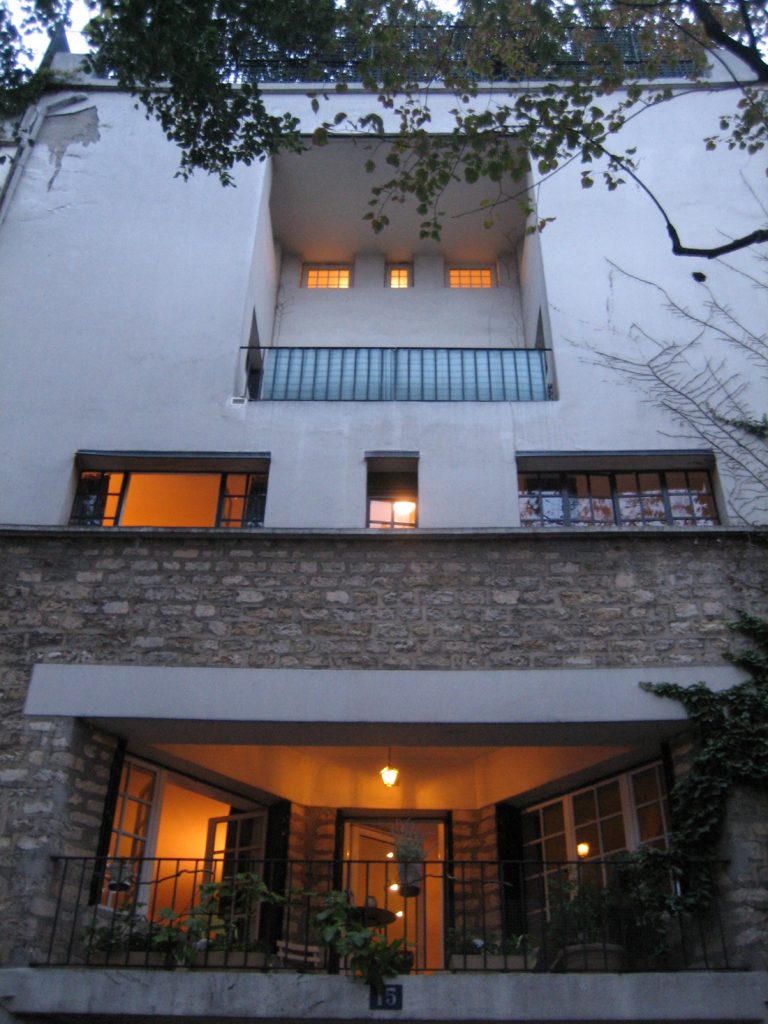 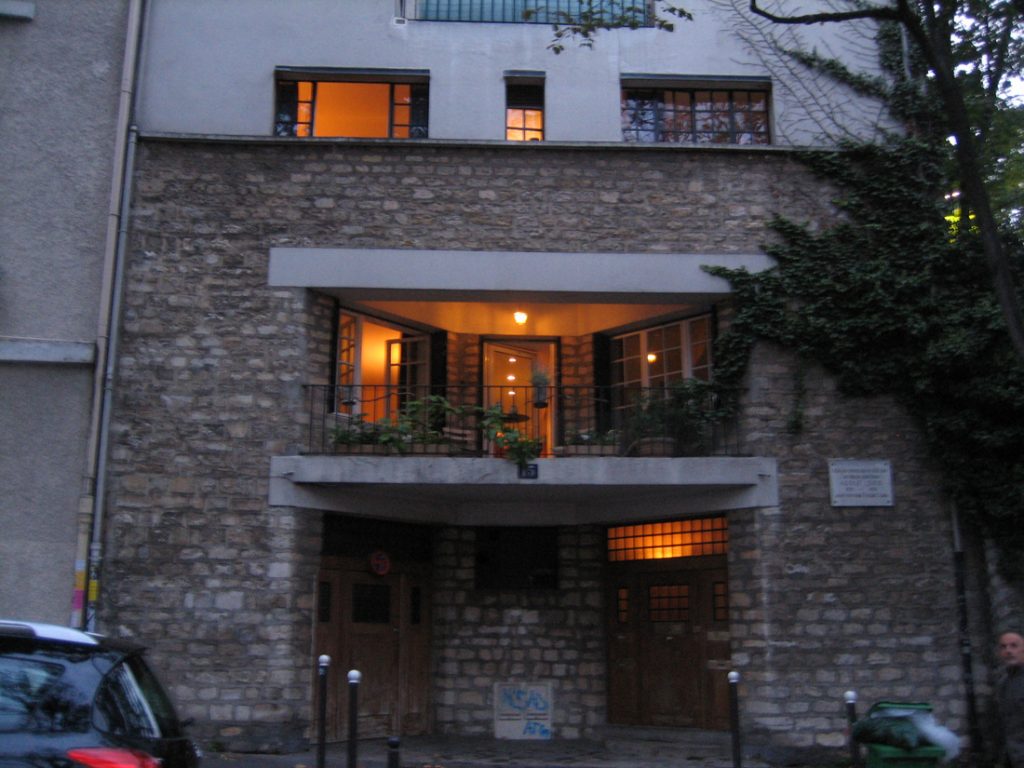 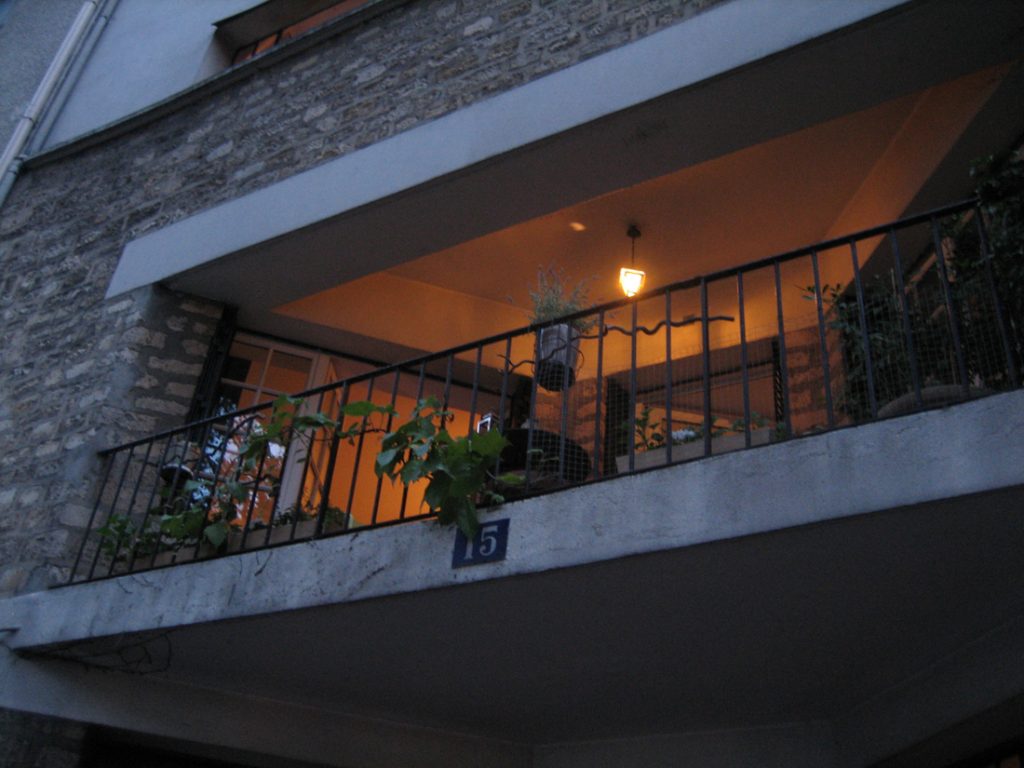 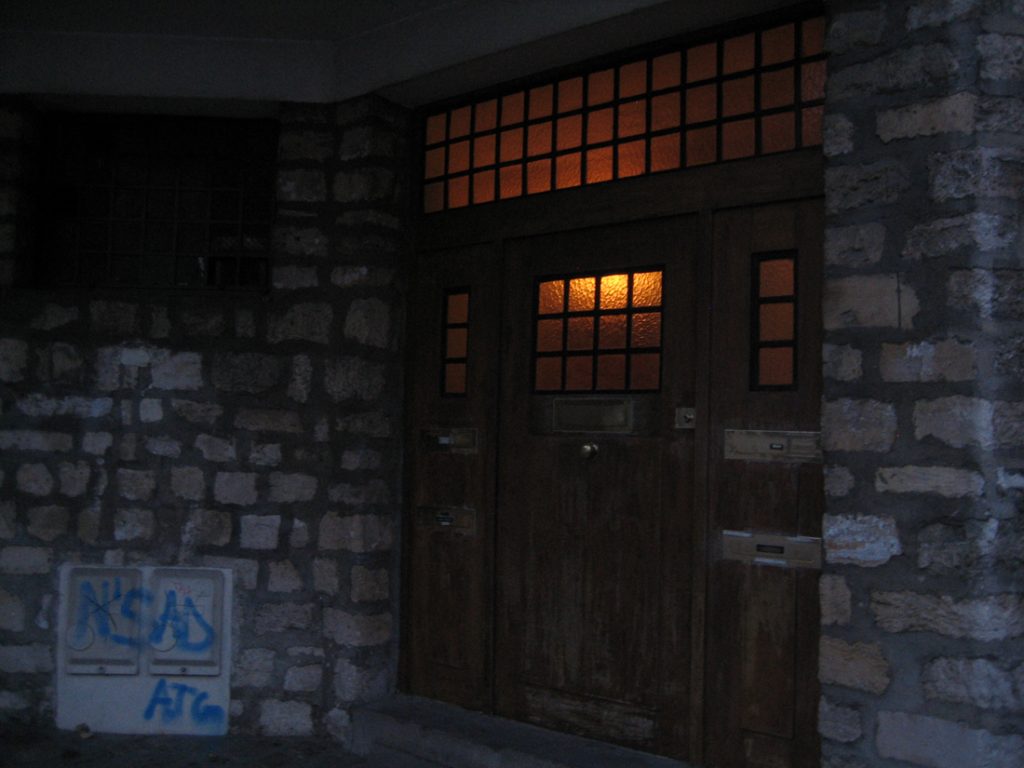 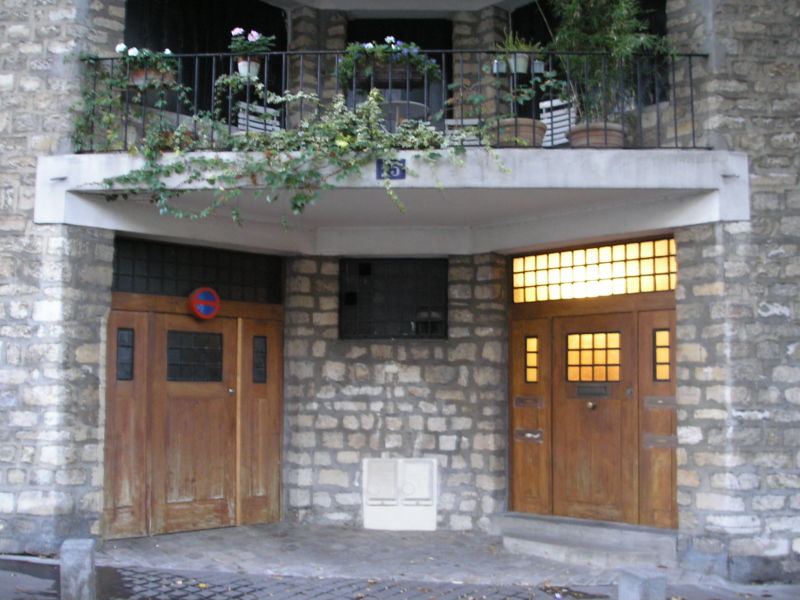