The estates of olive successor in time for the Muslim villages and farms Roman buildings are the largest rural architectural interest of the Lower Guadalquivir. This typology integrates in the same place two distinct areas: the manor, with an extensive garden and house work, both with their own backyards. The finances of Santa Ana dates from the eighteenth century, has been renovated and enlarged to accommodate the units of the present council of Sevillian Tomares.

As a starting point of an intervention that puts value in the structure of existing patios and extends to the new work, additions that were demolished had no net worth and turned the garden of the farm in the park. Of the old buildings have been preserved-timbered and decks of tile sloping Arabic, and has opted for a finish in white for the new. The area of the manor, with a Baroque facade of City Hall Square (arc lowered under the balcony is maintained as primary access), resolves the most public, reinforced by the presence of two courtyards. The first, chaired by a large ficus, serving as outdoor lobby, giving access to the room care to citizens. The second, which was arriving from across the first base of the tower, is the courtyard of the manor itself: archery bounded by a half point on marble pillars on the north side by a wall and battlements to the south. Housed in offices around him and the meeting room. This connects with the upper floor of the house that was saved, on the other side of the entrance to the halt, which are now the offices of the local police.

The area of work is also organized around two courtyards, both with larger scale and with access from the garden. The first one is closed on the north side with a newly-constructed building, half way between the two areas of the town hall houses the municipal hall full. The last yard, with a planting lemon trees, also precedes the new building of the mayoralty in the back of the plot, from which emerges a T-piece to complete the north facade, a backdrop to the garden. In the middle of the set, the old warehouse has been rehabilitated as a multi-purpose hall. This has created through it a step which connects the two independent yards older and has lifted a skylight in the roof longitudinal: his presence liberates the walls of windows and favors the adjustment of the room for any assembly.

Haciendas of the Olivar in an architectural form which integrates such diverse activities as the manorial residence, the processing industry of olives and other features agricultural and livestock; a set in which each activity relates her own space that articulates harmoniously, presenting different formal solutions that define the uses and its hierarchy.

They are therefore three units that determine the type that supports the formal and constructive system of ranches: the mill or processing industry of olives, units aimed at agricultural work and those dedicated to residence and social relations.

The spatial and functional ranches is organized around one or more yards. The number of patios depends on the length of the village and the complexity of the tasks to be undertaken in, but the more typical pattern is one that is organized around two courtyards: the manor and labor.

The yard work opens the cover to the countryside and is surrounded by buildings dedicated to livestock, agricultural activities and more troublesome the hostel for workers.

In the courtyard of the manor are doing their work and industrial storage. The manor that was used as the owner’s family home in the summer and in time of collection, is located in the wing of better targeting and more accessible, highlighting his home and the lookout tower.

Located on the streets of the Fountain, is the largest building of architectural and heritage that has Tomares. Official seat of the City Council, is the place where the social and cultural life of the municipality.

Commissioned to build by Count-Duke of Olivares, had the typical structure of the eighteenth century hacienda, with two distinct areas: the one intended for the manufacture of oil and other residential manor was completed with a magnificent garden.

The building has been completely refurbished by the architect Guillermo Vazquez Consuegra Sevillian. The careful rehabilitation has been carried out by establishing a bridge from the old to the new naturally, using a modern language in line with pre-existing spaces. The result is a building that has become habitual reference in the journals and architectural awards and is visited by professionals in this field worldwide.

In this rehabilitation of the Hacienda Santa Ana, the garden takes on special importance. So much so that this becomes a large green space in the lobby of City Hall. At its perimeter walls encalados there are several entries where tomareños can access the council through a Canadian oasis of palm trees, cypresses, pines, carob and so on.

Description of the work

The play is defined by a plant in regular route very clearly dividing the plot into two zones and built a garden.

The garden area is divided into two zones, a more organic that is organized from a few traces lines on a landscape where natural vegetation premium and the other more regulated, with a paving brick which is dominated by a few sheets of water that the order and defined.

In the built-up area is a clear distinction between new and old, but no new interventions desentonan with their immediate environment of a transition to occur naturally.

The project has sought to maintain and highlight the existing structure of courtyards and transitions between them so that they can traverse the entire building on a winding, walking in the yard to yard without going into any of the bodies Building. These courtyards are of different size and nature, from very small and closed up highly diffuse, which is not a clear boundary between it and the adjacent spaces.

Are preserved two distinct from the rest of the old Santa Ana, the main area (the area of the manor) that retains its character as eighteenth century building and building of a secondary nature, which was used as a warehouse and has become in the current multi-purpose hall.

In the intervention adds three new bodies, which operates a link between the two conserved and that focusing the halls of political groups and the plenary chamber, one that takes the place of the dwelling house of the old guard ( now units of local police) and finally a new body that is added to the bottom of the plot that will house areas for the mayor.

On the whole shows the intent of the composer volumes, the transitions in the care of the spaces and interest in the resolution of construction details.

The building solves the topography through ramps that connect their backyards and that already existed in the original building. 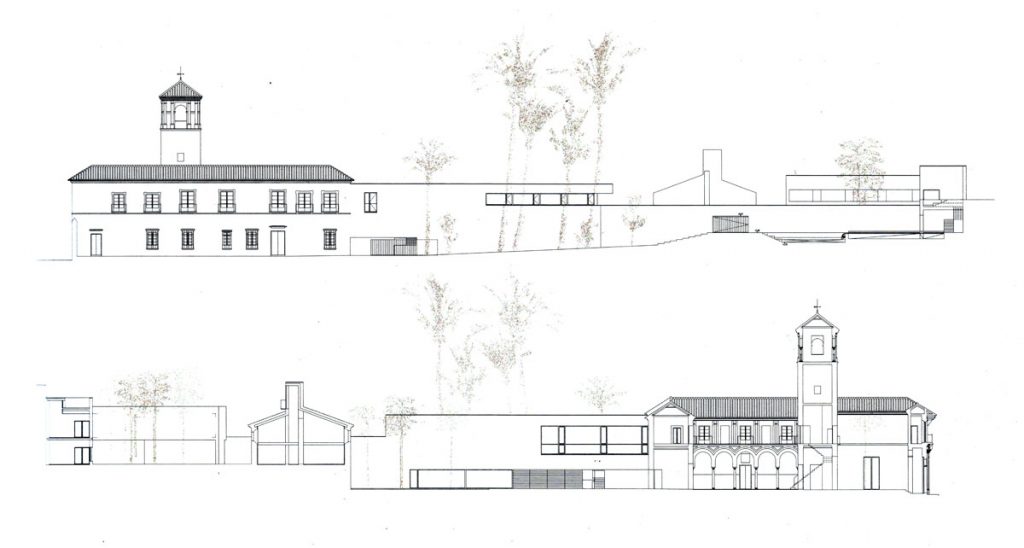 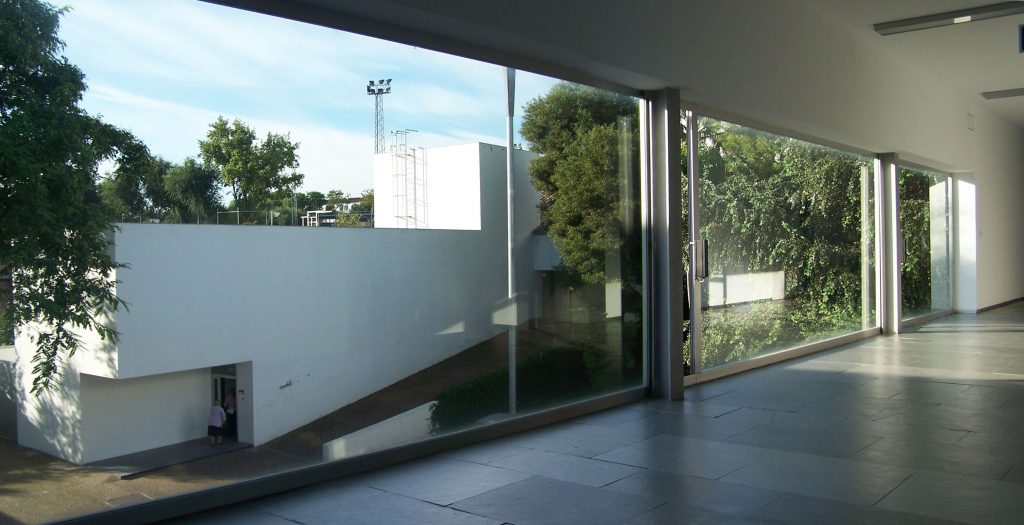 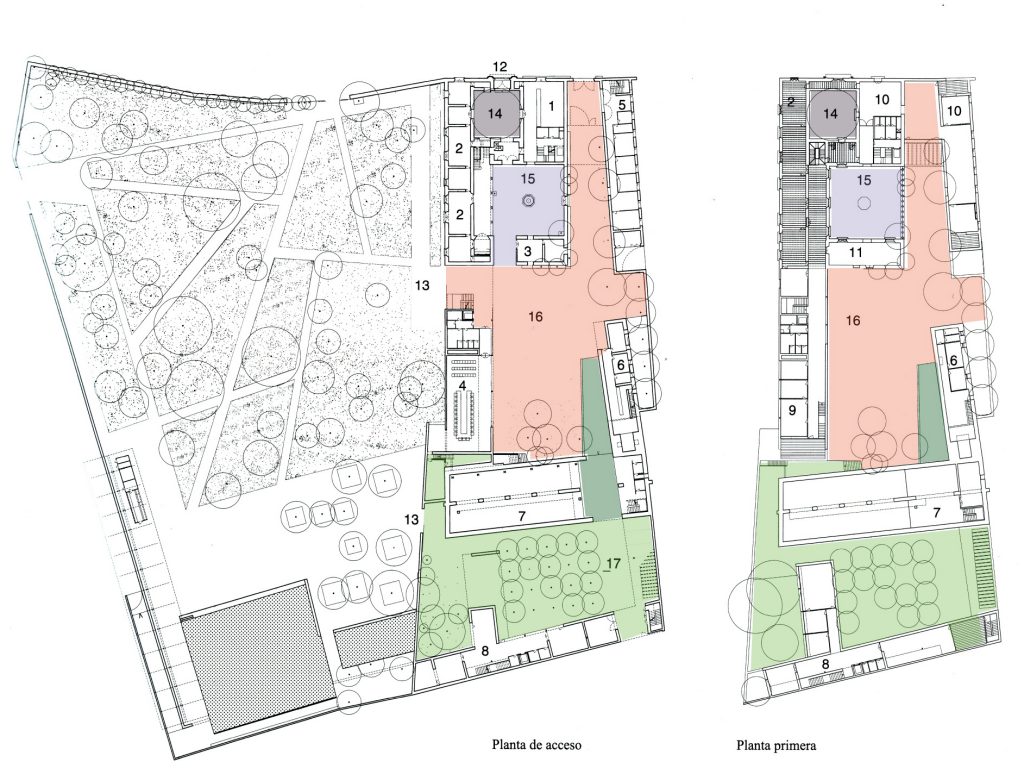 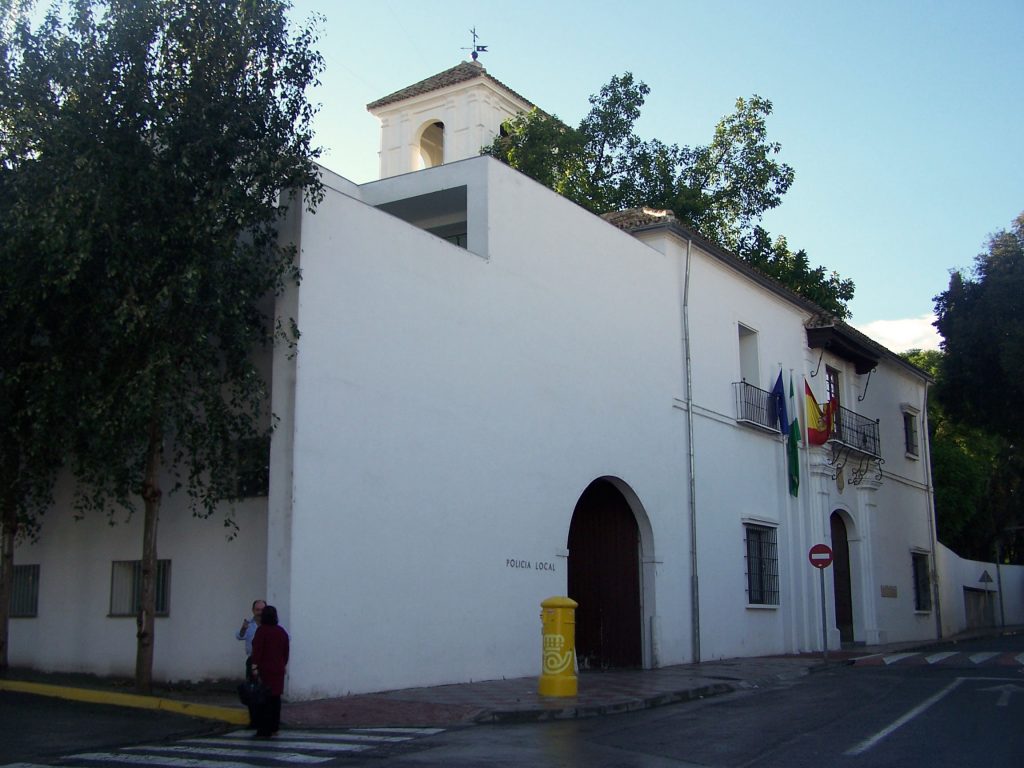 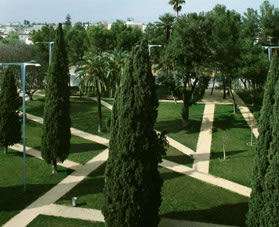 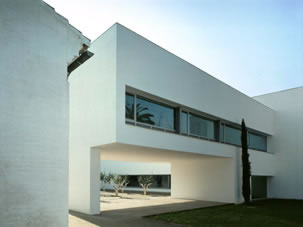 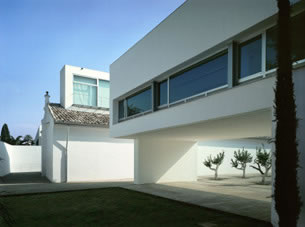 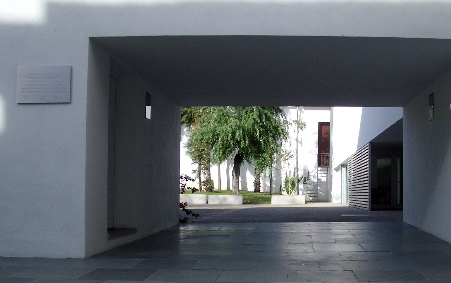 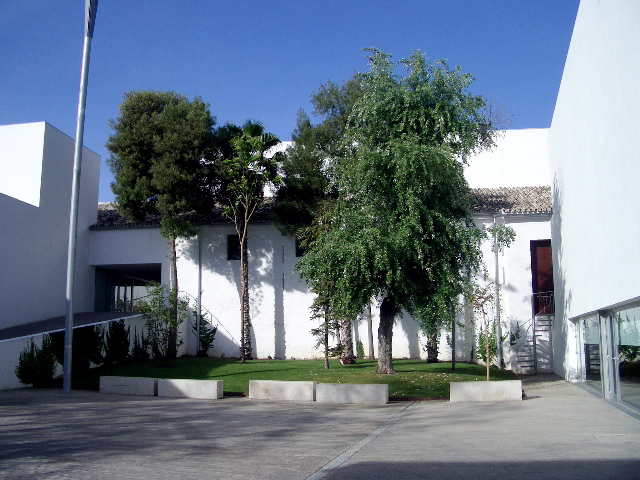 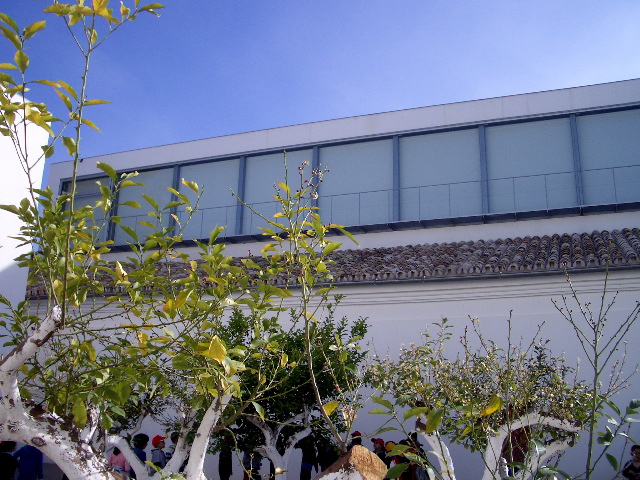 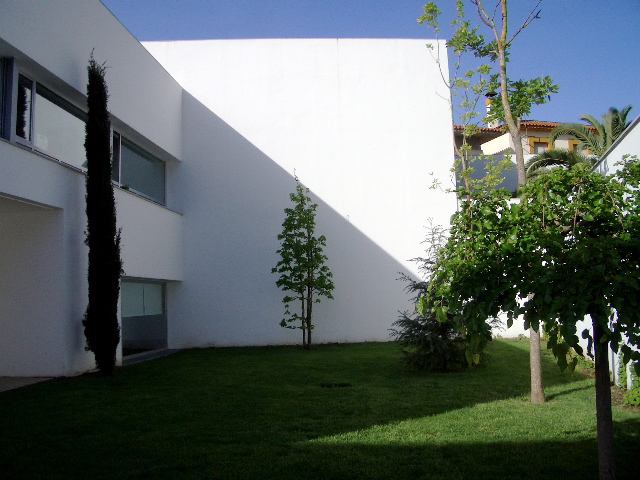 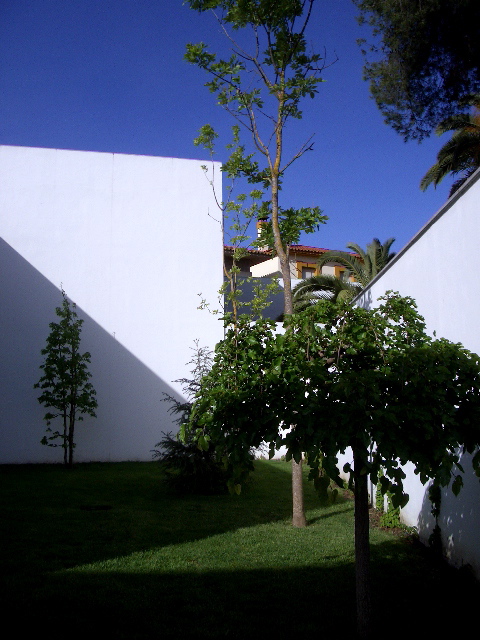 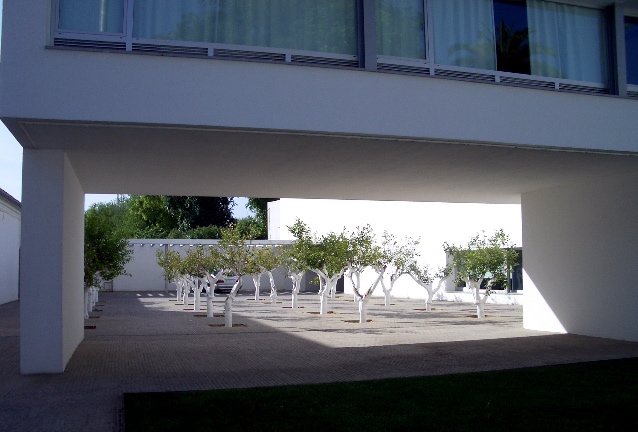 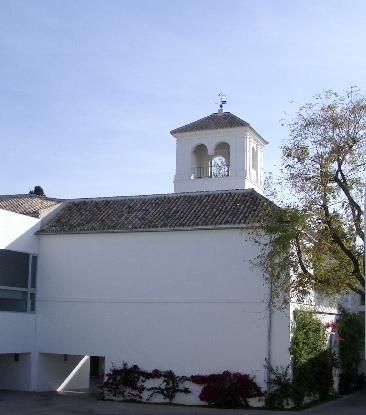 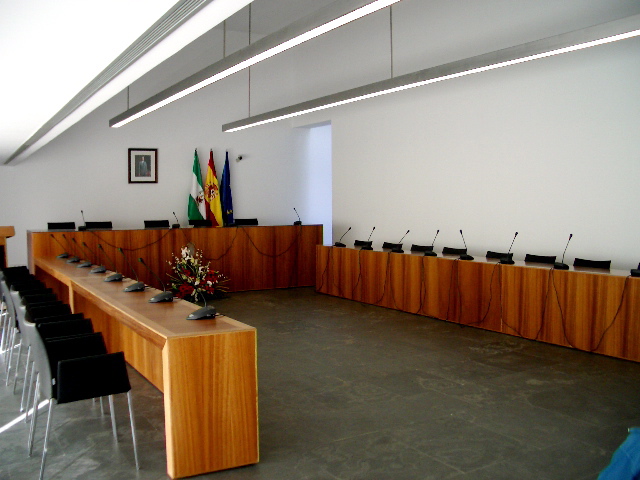 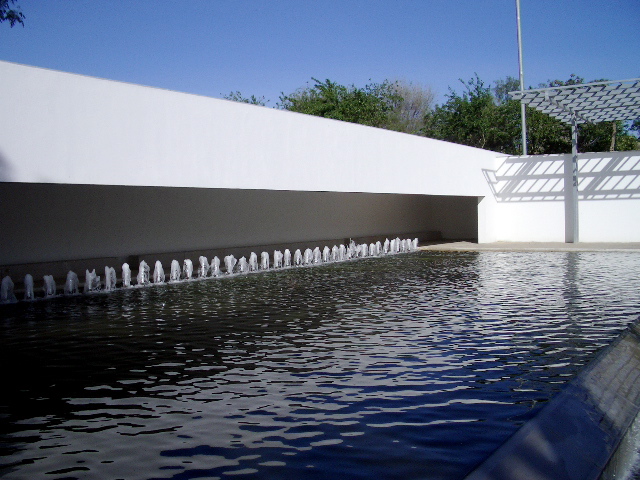 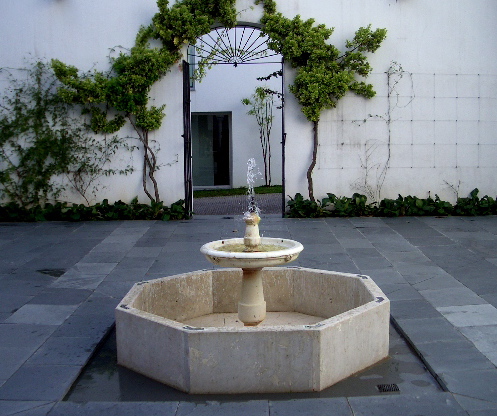 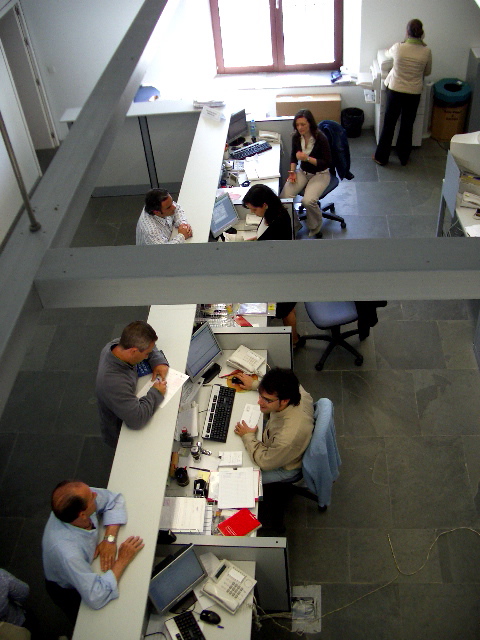 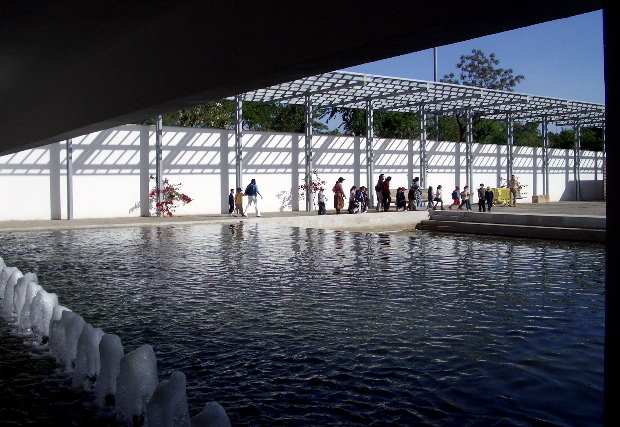