Sinthian rural village in southeastern Senegal is the setting for a new cultural center, conceived and funded by the Josef and Anni Albers Foundation in Connecticut collaboration with the local leader of Sinthian medical Magueye Ba who together with nonprofit -profit American Friends of Le Korsa had already collaborated in the creation and operation of a medical center and the first kindergarten in the village. Opened in March 2015 the building was selected for the Venice Biennale of Architecture 2014 and has won the AIA New York Award.

For the local community and its surroundings is a place to hold the markets with regional products, exposing traditional shows, meetings and share different points of view, for artistic both regional and international communities is a new space to experiment and create.

Josef and Anni Albers were two extraordinary artists and human beings, both renowned for his work in the Bauhaus in Germany before the close of that institution in 1933, when they moved to the United States. Anni Albers, especially textile artist, was the first in its field to exhibit at the Metropolitan Museum of Art in New York in 1970.
Thread Artistic Cultural Center program is inspired by the vital value of “from scratch” and the desire to “open the eyes” of Josef Albers. Anni acostustumbraba to say “You can go anywhere from anywhere” and Josef him a permanent objective, using the minimum resources for maximum effect. These beliefs are the foundation of Thread, there is no fixed artistic program.

The Cultural Center was raised in a rural village in southeastern Senegal, Sinthian, in the region of Tambacounda, Sub-Saharan Africa.
Sinthian is a village which lies 450km of Dakar where 12 tribes with 705 people registered and a much larger number of cows, goats and sheep used for handling live.

The Thread Cultural Centre has two objectives: allow artists access to raw materials that pique your inspiration and found in this area of ​​the world and not accessed using art as a means of developing links between rural Senegal and other parts of the world.
The concept under which the thread was designed to provide a residence for artists, both local and foreign, be used as a social center for the local community with a wide range of activities that allows those who come to your premises to discover new forms of creativity, cultivate their skills through different means at its disposal. But also within the priorities of the program was contemplated getting a source of drinking water safer for the population.
The center is a laboratory for discovering new forms of expression for both the local community and resident artists. 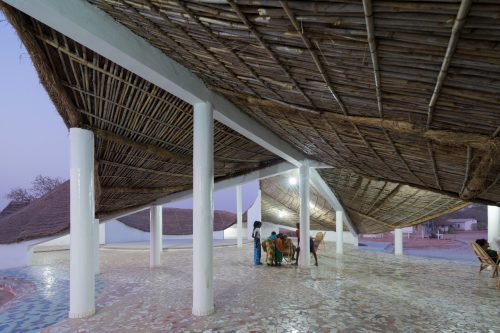 The Thread has indoor and outdoor studies, two single bedrooms with bathroom and kitchen for visiting artists at each end of the building. All interior spaces are connected by a system of narrow canals that serve particular loop connecting all environments and leave underscores the vital importance of water.

In the middle of building a large common space, outdoors, with two patios protected from rain and intense heat on the sides, where general meetings, local performances or the market are made, also surrounded by fine channels open that flow into each collection tanks located at the ends of the plant 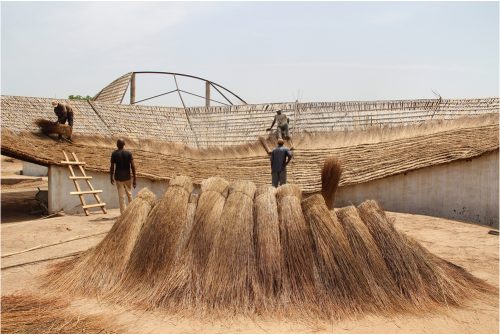 In its construction materials and local builders who have shared and combined their sophisticated knowledge in the treatment of bamboo, brick and thatched roofs with innovative design Toshiko Mori was used.

A good example of collaborative nature surrounding the construction of the project are perforated brick walls, Local technique that allows air circulation, and that the design of Toshiko Mori Architects incorporate the aesthetics of German artist Josef Albers. The result is a wall whose design and construction was counted with the collaboration of the Senegalese Samba-Tine Benjamin engineer, architect Toshiko Mori Japanese and an American curator, Nick Murphy, who knows the work of the modernist artist is obtained. The local leader Dr. Magueye Ba has supervised the entire construction process. 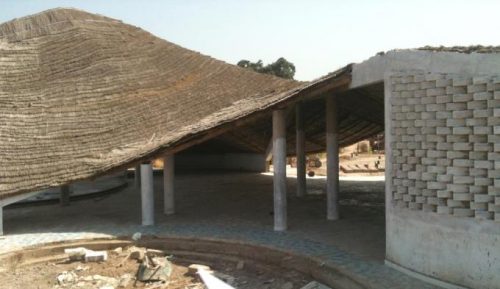 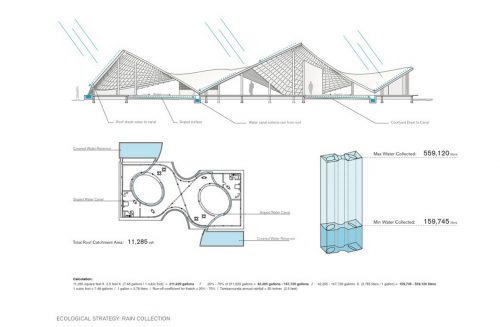 One of the most promising outcome of this collaboration is the ceiling. Is a local custom to use straw and earrings highly inclined to allow water to drain buildings. Here, the same technology has shifted to natural takeoff order to collect and divert water into adjacent basins. The thatched roof is supported on a framework that relies on numerous columns.

This system allows to collect up to 40% of domestic water consumed by the population and that comes from the rain, better accessibility and reduced risk of contamination when compared with the usual collection systems and wells. The Center has 2 tanks with 280,000 liters capacity where it is collected and purified water.

As another tribute to Josef Albers, patio floors have been covered with irregular geometric mosaic pieces inserted on the cement.