This majestic chapel made of glass and wood by the architect E. Fay Jones was chosen in 2001 by the American Institute of Architecture as one of the top ten designs of the 20th century. In 1981, one year after its inauguration, it was awarded the Design Award, both that year and the decade.

Building this chapel was the dream of Jim Reed, a retired schoolteacher who imagined a glass chapel that would inspire his friends and visitors to be “so close to God.”

Reed was not a particularly religious man, according to a brief story written by his son and pastor of Thorncrown, Doug Reed. In fact, Reed had originally bought the land to build a retirement home, hoping to live the rest of his days among the majestic Ozarks.

“Jim [Jim] was not the only one who admired his location, often many people would stop by his house to get a better view of the beautiful Ozark hills.Instead of driving them away, Jim decided to invite them in. He decided that he and His wife would build a glass chapel in the woods to inspire their visitors … “, to design and build the project I call a former student of Frank Lloyd Wright, the architect E. Fay Jones.

Located in a forest of the Ozark Mountains, Thorncrown Chapel rises 15m into the sky, close to Highway 62 West, just outside of Eureka Springs, Arkansas, United States.

Seated in one of the platforms offered by the terrain, the rectangular plant is oriented parallel to the level lines, the same direction that follows the path of access, thus avoiding the steps. 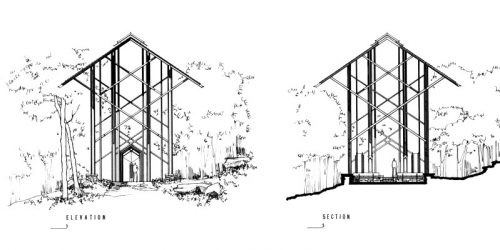 The inspiration for Thorncrown’s chapel was the illuminated Gothic chapel of Paris, Sainte Chappelle. Jones affectionately called Thorncrown’s “Ozark Gothic” style. The rectangular plant construction, 7,32×18,28m, rises 15m into the sky with more than 557.42m2 of glass and 425 windows.
Light, shadows and reflections play an important role in the atmosphere of the chapel.Due to their elaborate woods and surrounding trees, patterns of light change continuously and shadows appear throughout the day. At night the reflections of the lights of the crosses seem to surround the whole building. Therefore, Thorncrown never seems the same. Their appearance changes during each hour of the day and during the different seasons of the year. Its design recalls the “Prairie School of Architecture” popularized by Frank Lloyd Wright, of whom Fay Jones was a disciple.

The Thorncrown Chapel shows how proper planning can reduce the impact of a building on site. The framework of vertical and diagonal beams were made with tailor-made longitudinal cuts of pine growing in the area so that they can be transported through the forest. The selection of materials was carefully considered, all wood comes from local sources, the floor is made of slabs, and the building is surrounded by a low rock wall that links it with its surroundings.

But the most important feature of the Thorncrown Chapel is the way it blends completely with its surroundings. The glazed facade turns what could be a rather heavy object in the middle of the forest into a light, almost invisible structure. The transparent façade allows visitors to experience the forest while inside the building. The building changes with the climate and the surrounding vegetation, ensuring that each visit is unique.

Although at first glance it looks like an open-air structure, the chapel is protected by a glass screen and inside offers a conditioned space with a gable deck and a front door that welcomes visitors.

The structure sits on top of more than 100 tons of living stone and colored slabs which perfectly coupled with its surroundings. The simple chapel design and majestic beauty combine to make what critics have called “one of the best religious spaces of modern times”. In the intimacy of the forest the chapel rises like a simple structure with the appearance of a shed and a gable deck.

In order to preserve Thorncrown’s natural environment, Fay decided that no structural element should be greater than what two men could carry through the woods. 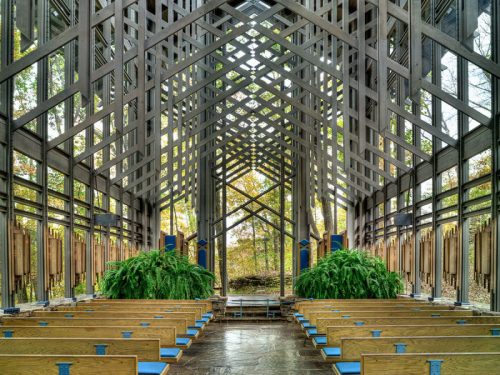 Unlike the outward contour that is sharply outlined by its windows and roof, creating a definite volume within the forest, in the interior Jones dissolves the contours by means of the numerous structural elements, thus hindering the perception of the boundaries between within – Outside, between the inner space and the forest. In this way the slender pine beams with grayish tones forming the structure are visually mimicked with the forest, following an arrangement of superimposed elements and depths that emulate nature. The entire structure is reinforced by the dissolution of the interior-exterior space by the great amount of zenith that it receives through the great skylight placed in the union of the two waters of the deck and the shadows that the same forest generates. In this style “Ozark Gothic” as Fay Jones has called the light structure of fastening and balance is achieved by tensed internal elements

The wooden structure rests on the lower side walls that follow the longer sides of the plant and are cut only when they reach the podium with two pulpits, without altar, which rises three steps. Behind the podium opens a window that closes the rectangle, but unlike the opposite side, that of the door, is completely transparent. 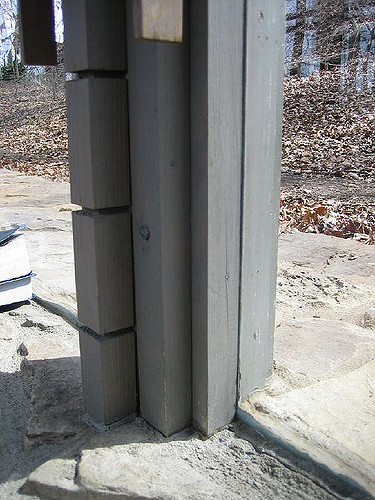 Constructed mostly of wood, pine treated 2x4s, 2x6s, and 2x12s. The larger elements of the building, such as armors, were assembled on the floor and lifted in place. Almost all of the materials are natural from northeast Arkansas minimizing transportation costs.

Most of the materials used in the chapel adapt to their surroundings, industrial beams mount the structure, creating a pattern in the form of a diamond that from the outside seems a part of the forest. In its interior small details distinguish it as a model of architectural accomplishment: the steel joints in the beams, the skylights, the reflection of the glass and the metallic roof. The structure contains 425 windows and 557.42m2 of glass. The building has a floor of native colored slabs surrounded by a rock wall that gives the impression that the chapel is part of the Ozark hillside.

Contrasting with the transparency of the glass the access to the chapel is defined by an opaque wooden door, a mediating point between the non-architectural exterior and the architectural interior.