For almost a decade the rise of glass and steel structures marked the development of the western part of Manhattan. The end result is known as Hudson Yards, a mega neighborhood that includes skyscrapers designed by some of the most renowned architects, a 67,000m2 shopping center, a cultural center and a particular structure that anchors the entire project.

Hudson Yards is the largest private mixed-use real estate project in the history of the United States. A real estate development promoted by the New York City Planning Department in partnership with the Metropolitan Transportation Authority (MTA) in the neighborhoods of Chelsea and along the Hudson River in Manhattan. It has an extension of subway line 7 with a stop at the station of the same name, on 11th Avenue.

The structure that creates harmony and balance within this vertical grid of metal and glass is the sculpture The Vessel (the Ship), also known as “the stairs of New York”, started in 2017 and inaugurated on March 15, 2019. It He planned that “Vassel” be the temporary name of the structure during construction and that the final name would be determined later. In January 2019, Hudson Yards officials requested public suggestions to change the name. Although the structure did not have an official name, the website was called the “Hudson Yards Staircase”.

Vessel is located in the new 11ha district located on the west side of Manhattan, above some railroad grounds, in New York, United States. The structure is located in the heart of Hudson Yards, in the middle of the central garden square and near the cultural centerCulture Shed  and the High Line, surrounded by large glazed skyscrapers.

The studio of the english architect and designer Thomas Heatherwick was invited to design a public centerpiece for the new district. To create something meaningful, the study wanted to develop a structure that visitors could use, touch and interact with. With this thought the idea of ​​a new reference point that could be climbed and explored was developed, inspired by the ancient wells of India or Baoris, a kind of giant wells with stairs and terraces around, intended to collect and store water from rain. The study sought to evoke the powerful effect of its repetitive steps, flights and landings until it reached the earth. On one occasion Heatherwick also told the media that his design for Vessel originated from a childhood experience when he “fell in love with an old wooden staircase discarded from a local work.”

Thomas Heatherwick and Heatherwick Studio imagined this interactive work of art as a focal point where people can enjoy new perspectives of the city and each other, from different heights, angles and points of view, although some critics have called it hive, rib cage or doner kebab.

This particular scalable structure is composed of 154 stretches of intricately interconnected stairs and almost 2500 steps where the effect of going up and down creates a personal rhythm for each visitor. With a height of 46 meters, it raises visitors above the square and reveals views across Hudson Yards and Manhattan from 80 platforms arranged around its perimeter.

The lower part of polished copper color contrasts with the painted rough steel surfaces of the complex architectural framework, animating the structure with the reflections of the surrounding city. Forming the heart of this great new district. Vessel represents Hudson Yards’ intention to create a significant public legacy for New York. The Vessel is also wheelchair accessible and has a lift.

The platform on which the structure is elevated serves as a ventilation cover for the working workyards below and is designed to support large-scale plantations, while simultaneously acting as a reservoir for stormwater management and reuse in the place.

This sculpture “to be used” was created with a structural steel frame that displays a conical shape, narrower at its base, 15m linear and expands as it rises to reach 45m at its highest part. In some areas the structural framework was covered by a skin of copper-colored polished metal plates.

The structure that also plays a stabilizing role among the great development of neighboring skyscrapers is shaped like an inverted cone, it expands upwards, in reverse of the buildings that surround it. It was built in Italy and shipped by ship to Newark and from there transported through Hudson to the site where it was to be assembled. Construction began on April 18 with the installation of the first 10 pieces of a total of 75.

The Heatherwick Studio team used a non-corrosive steel to coat each level of the structure and copper-colored metal sheets enveloped the soffits, reflecting people standing or walking in the square below, while the interior materials, such as the concrete, are much darker and consistent with the urban environment.

The public garden in whose square Vassel stands is a huge green space of 20,234m2 that has 28,000 plants and trees. 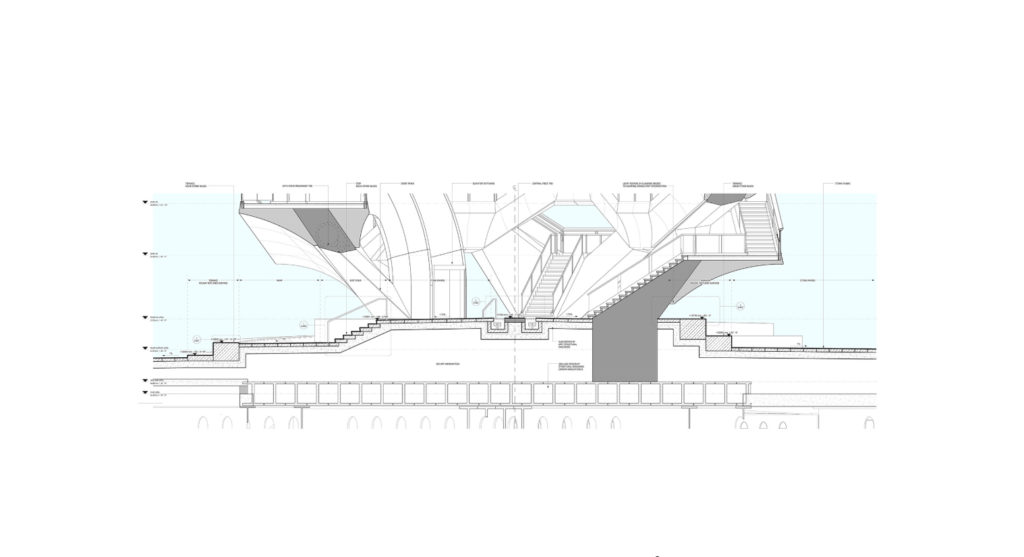 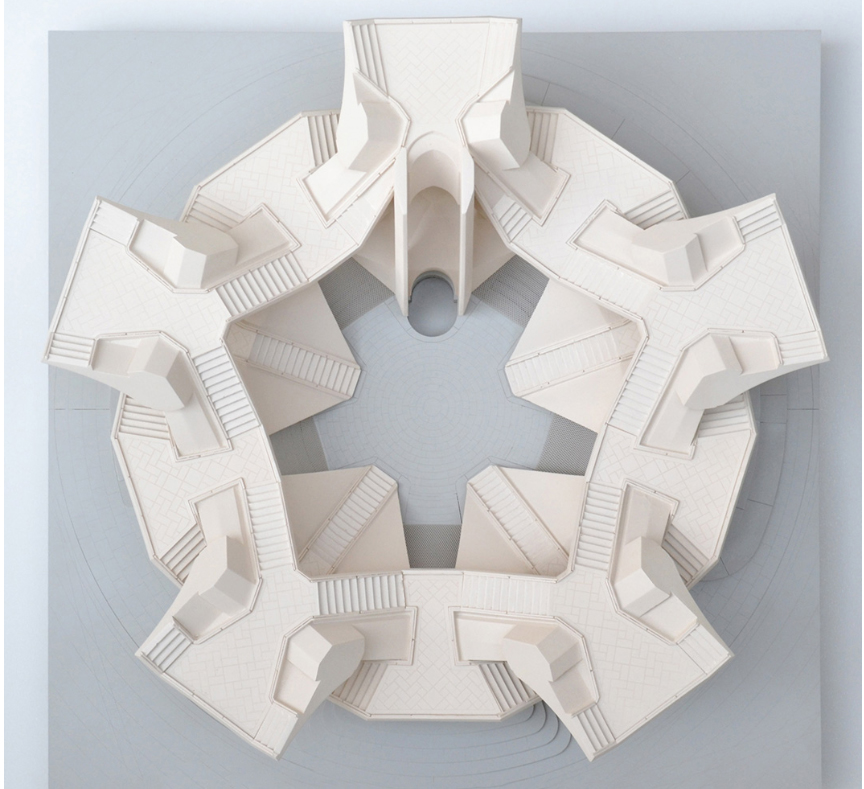 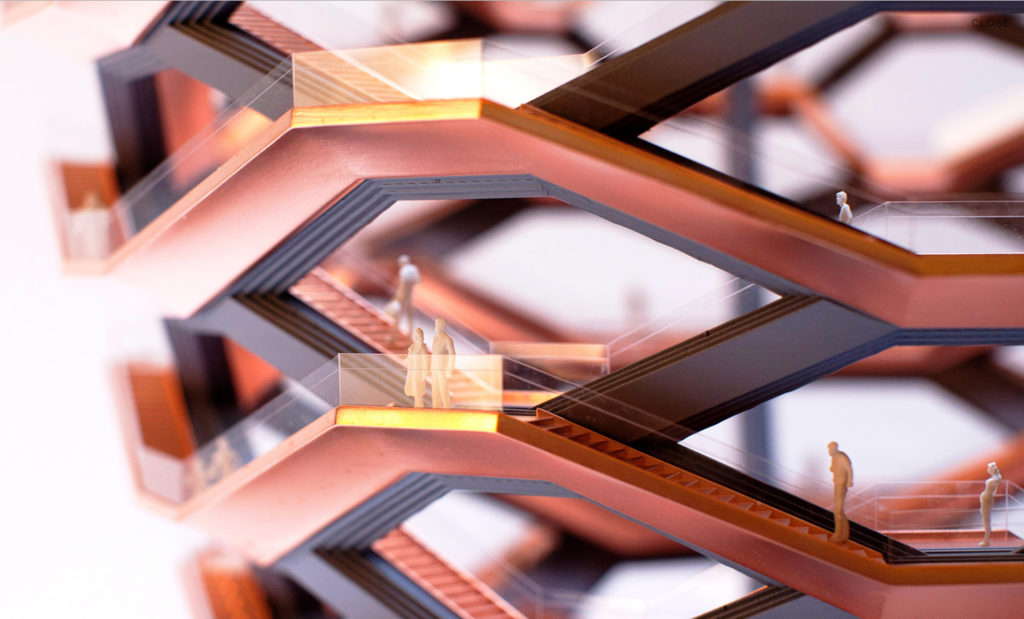 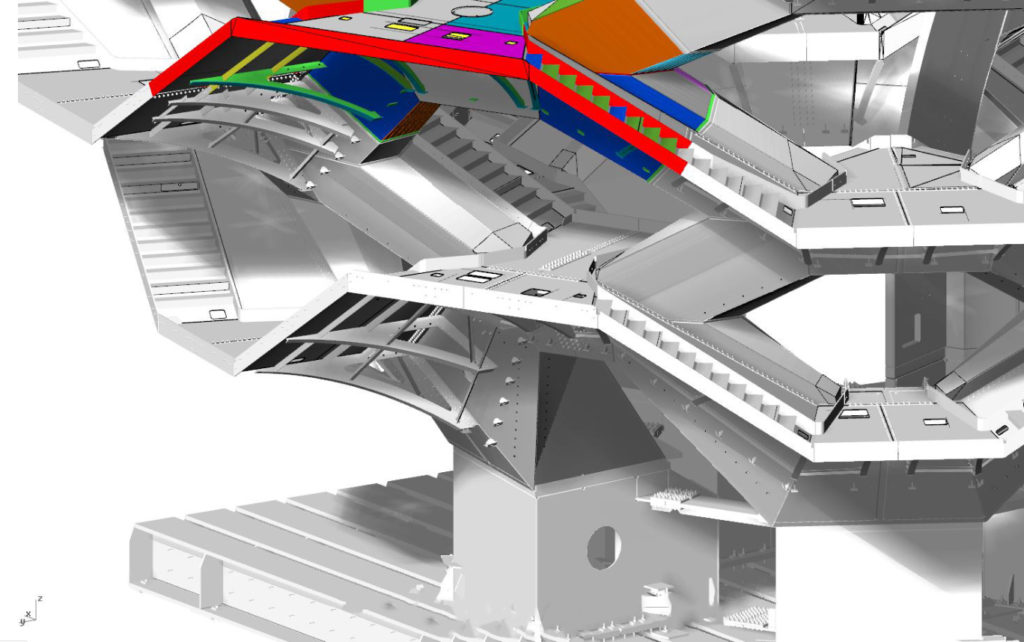 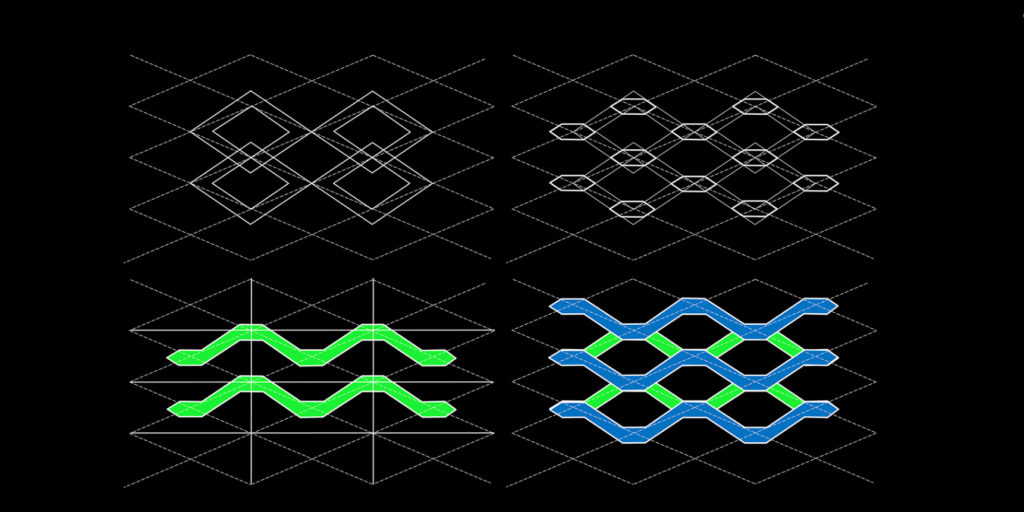 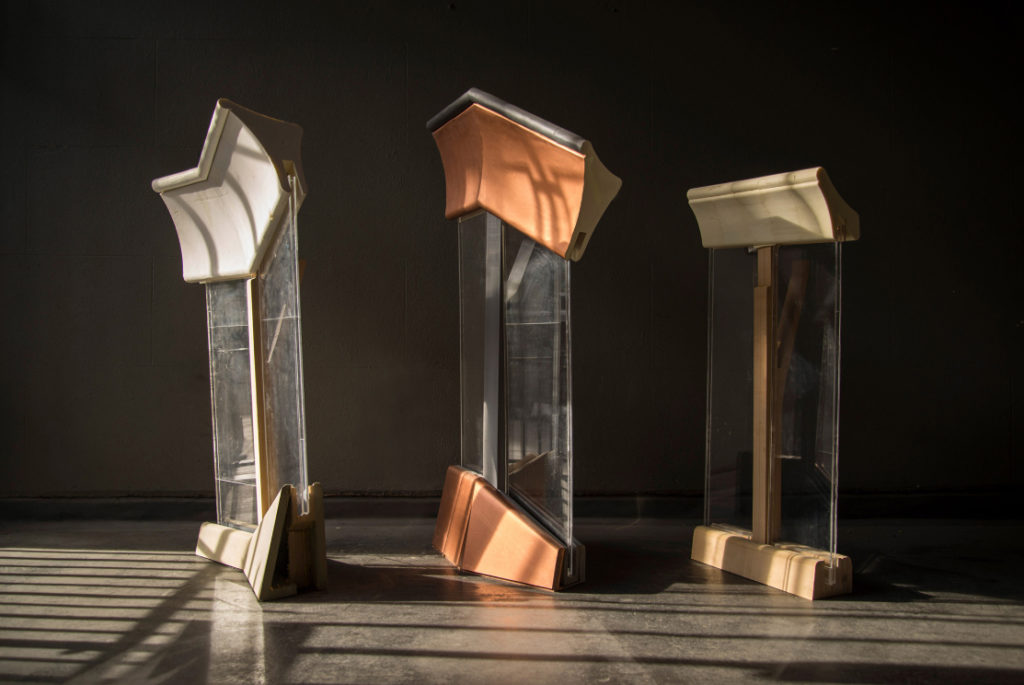 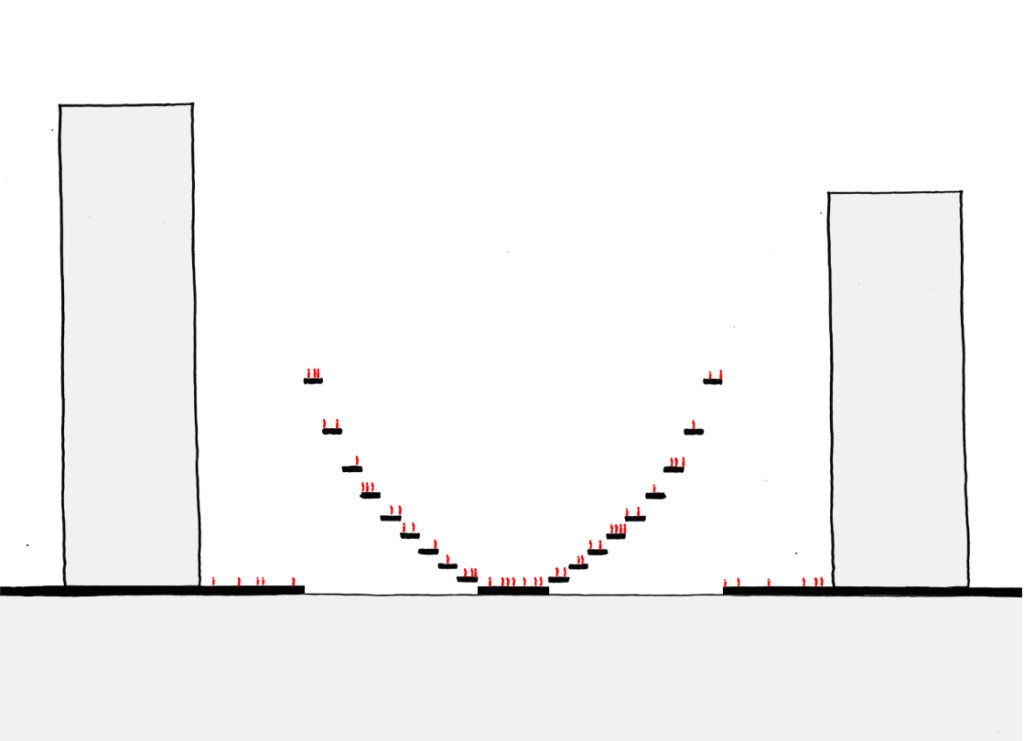 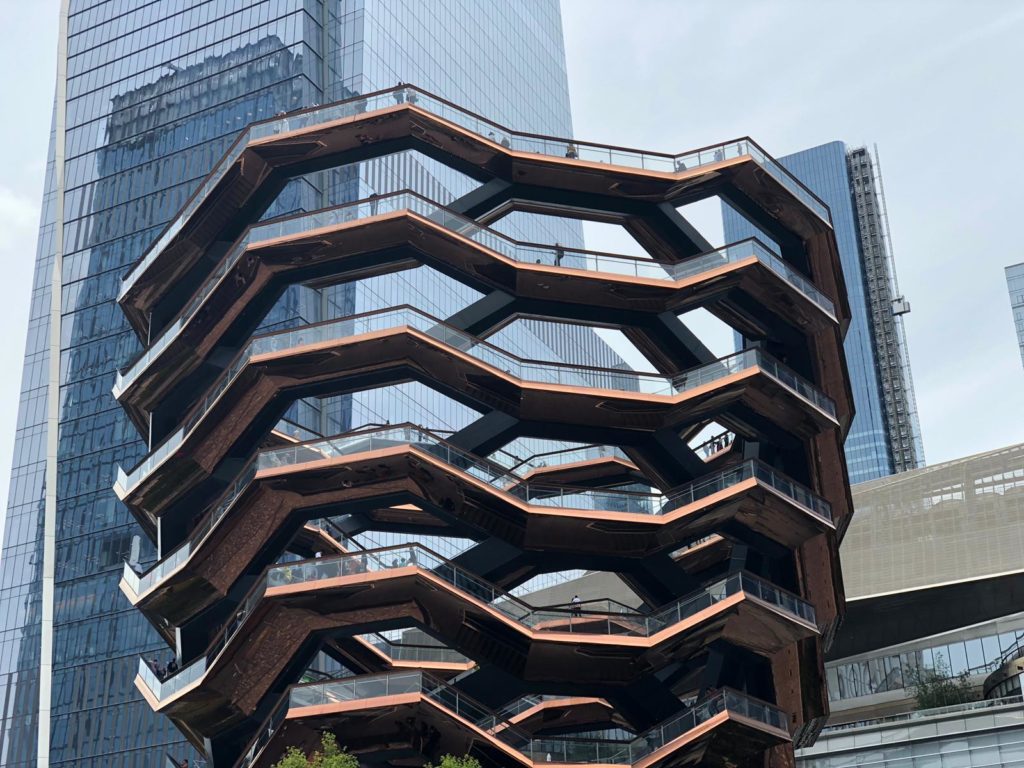 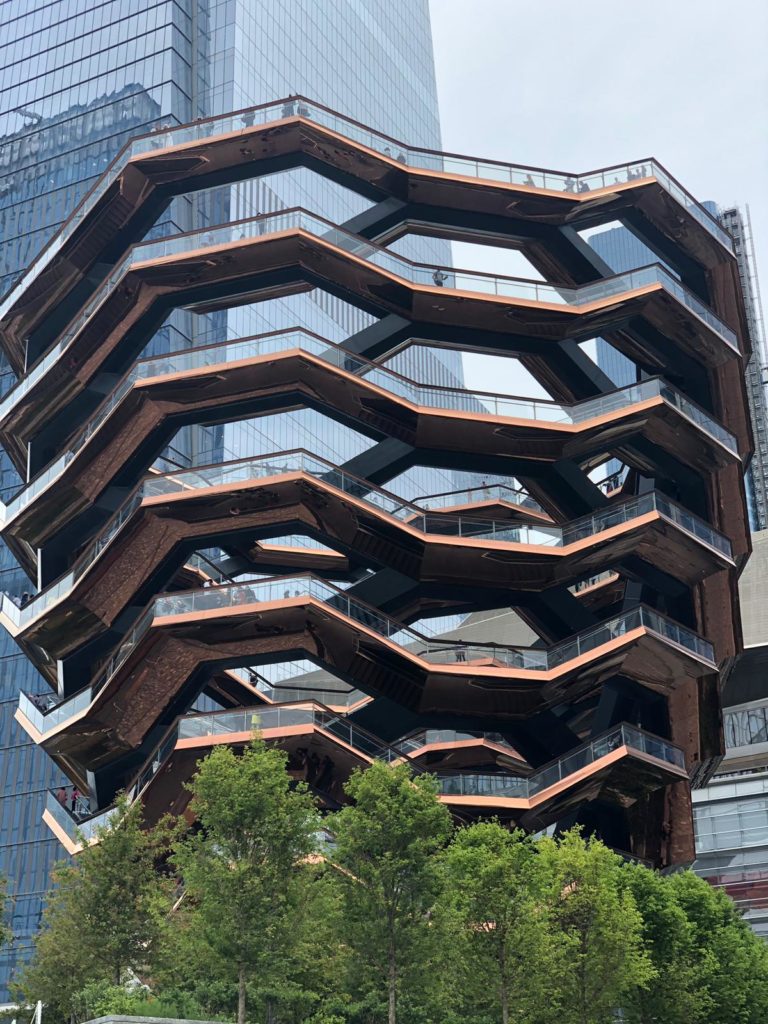 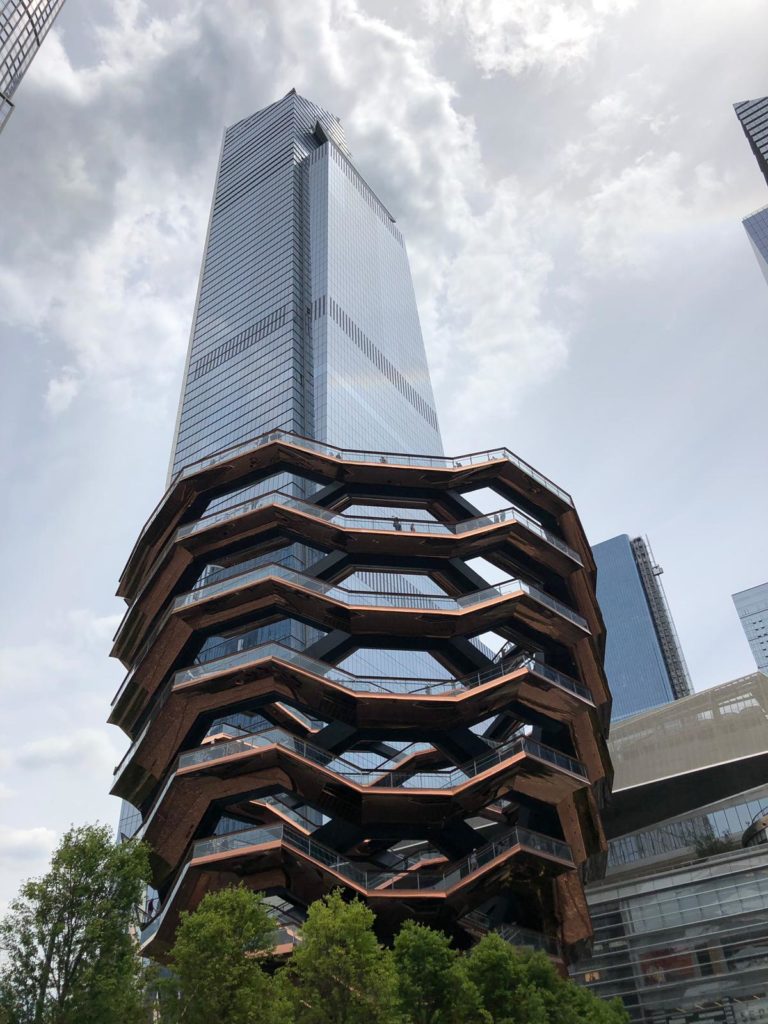 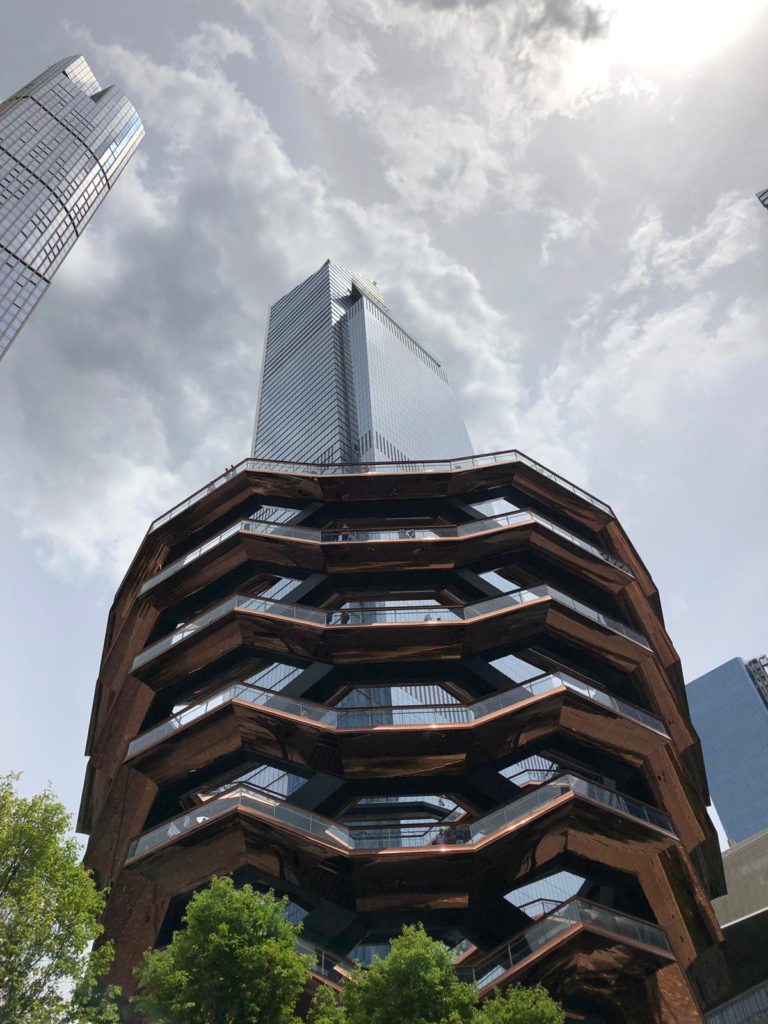 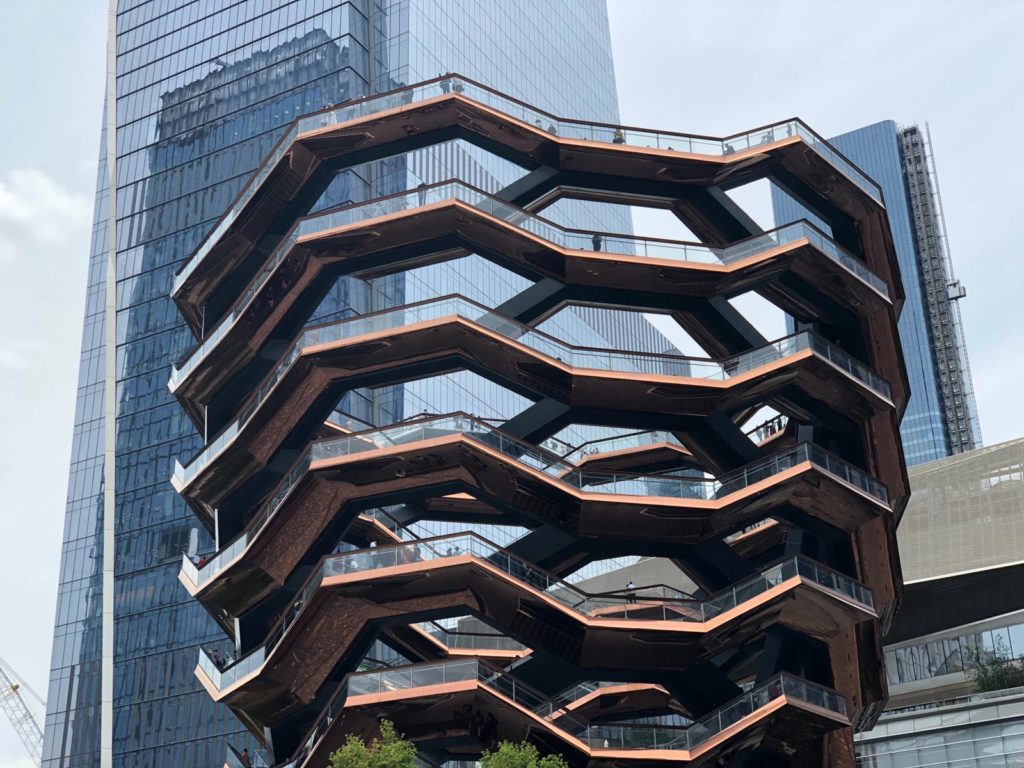 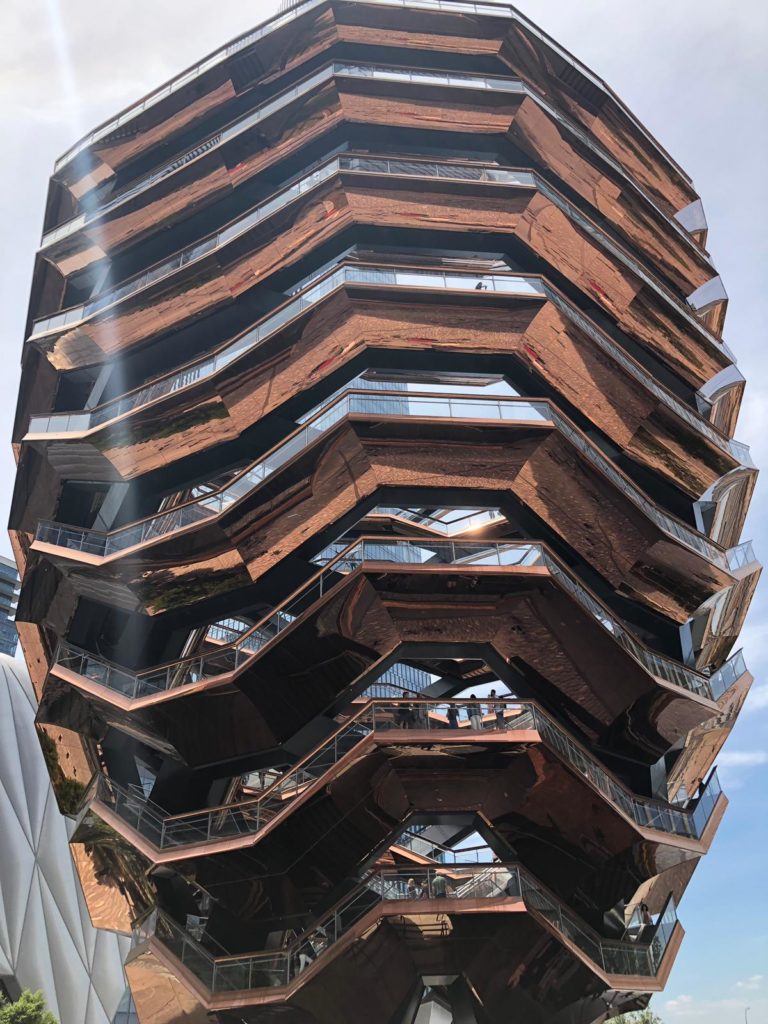 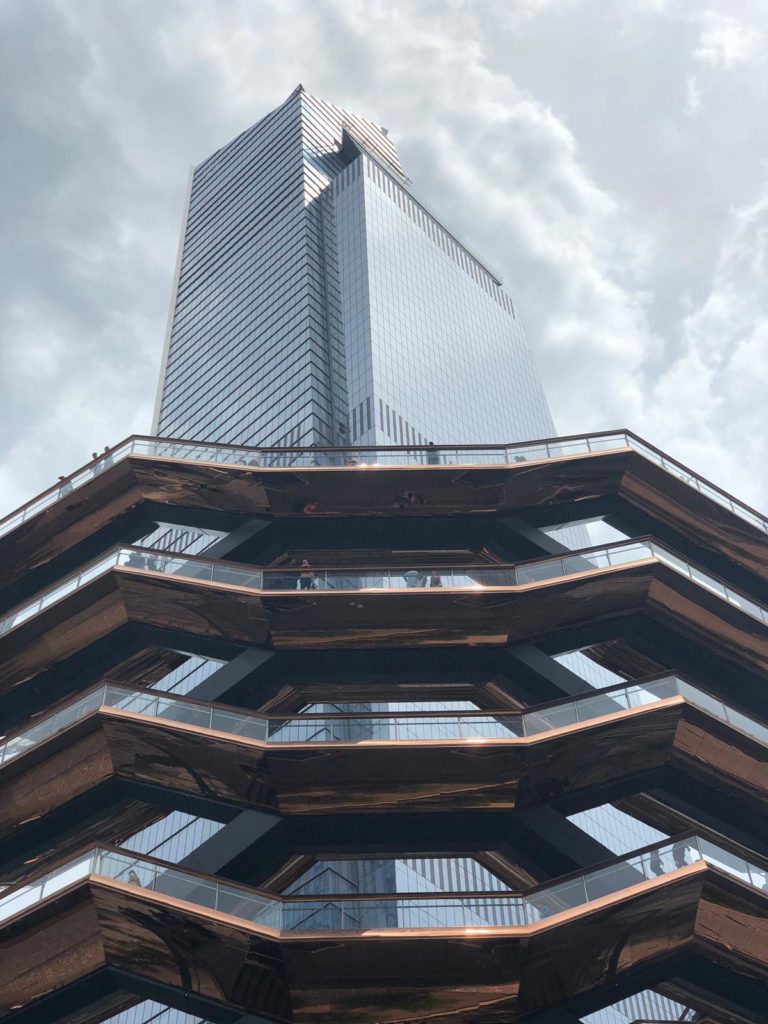 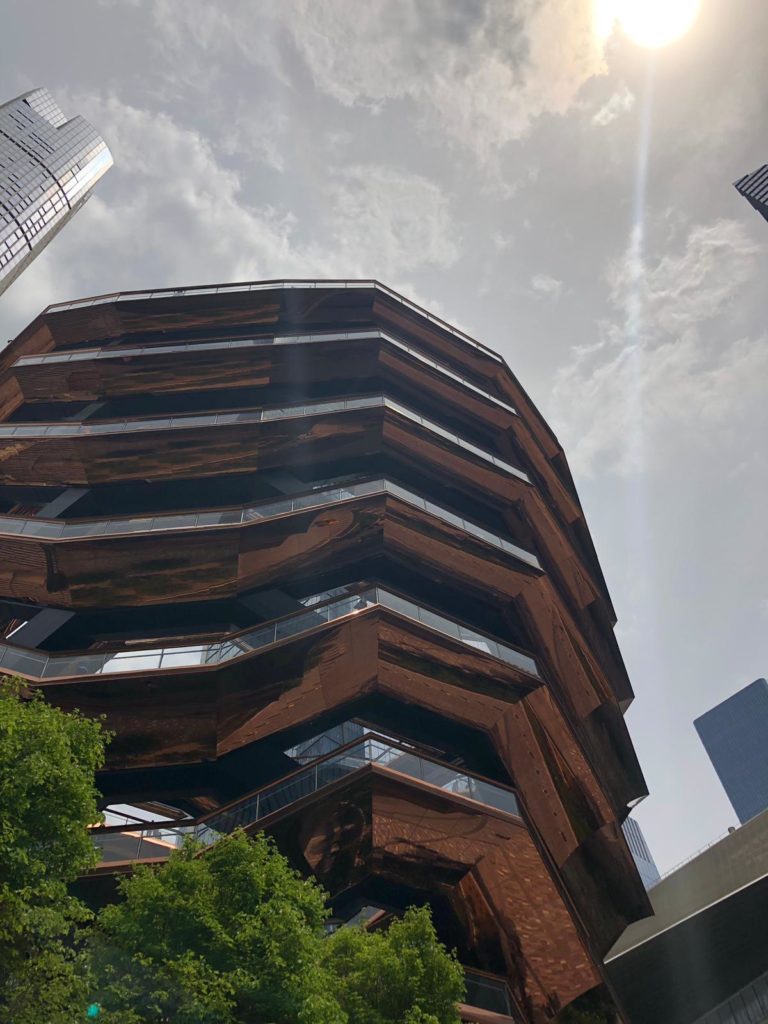 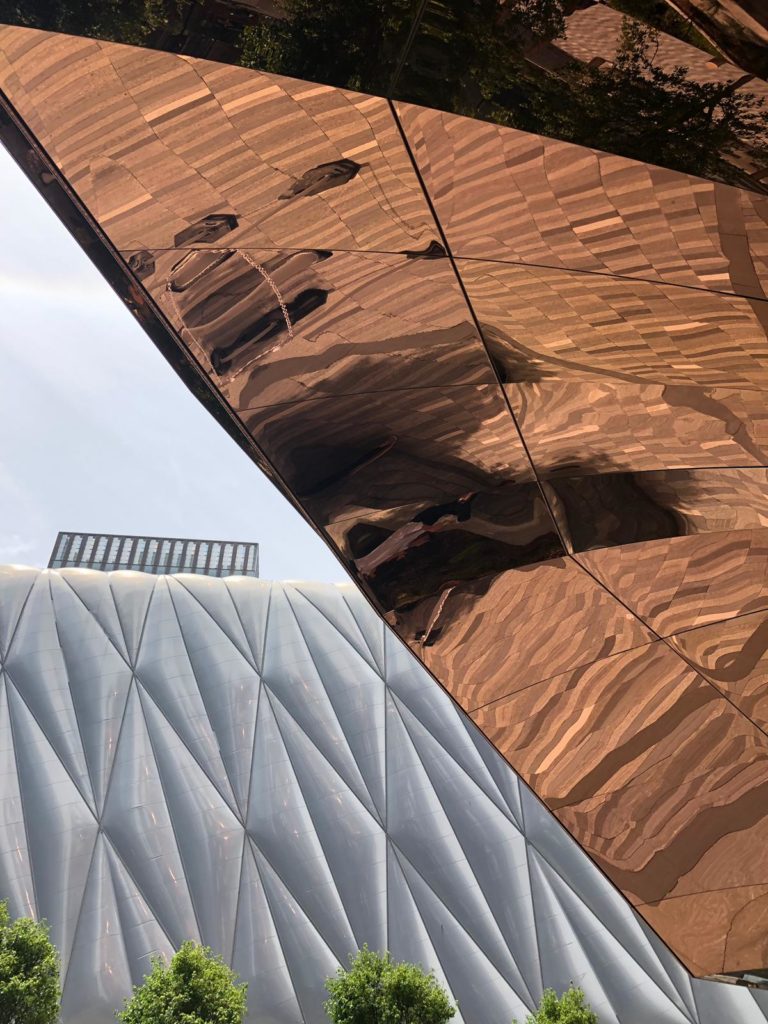 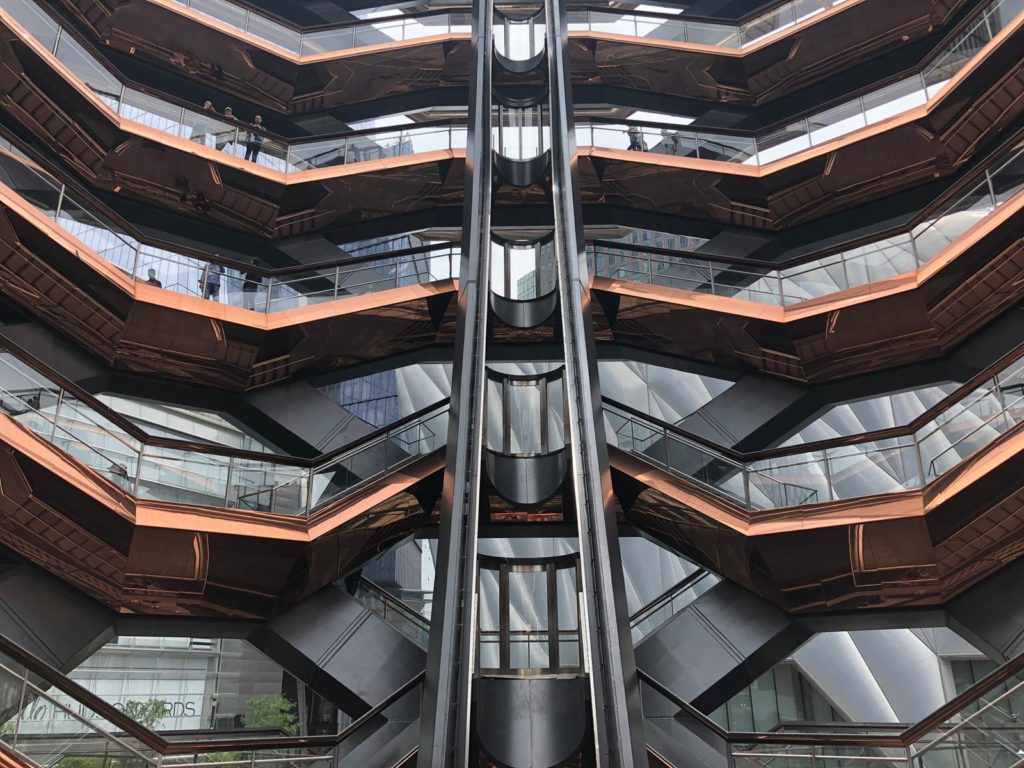 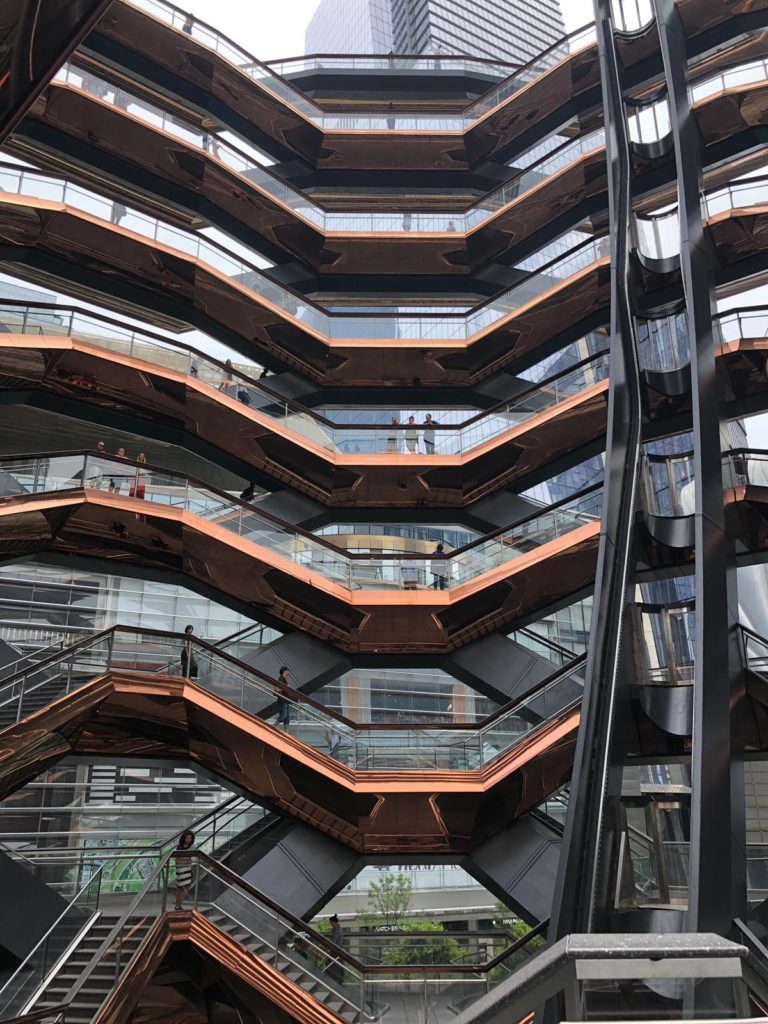 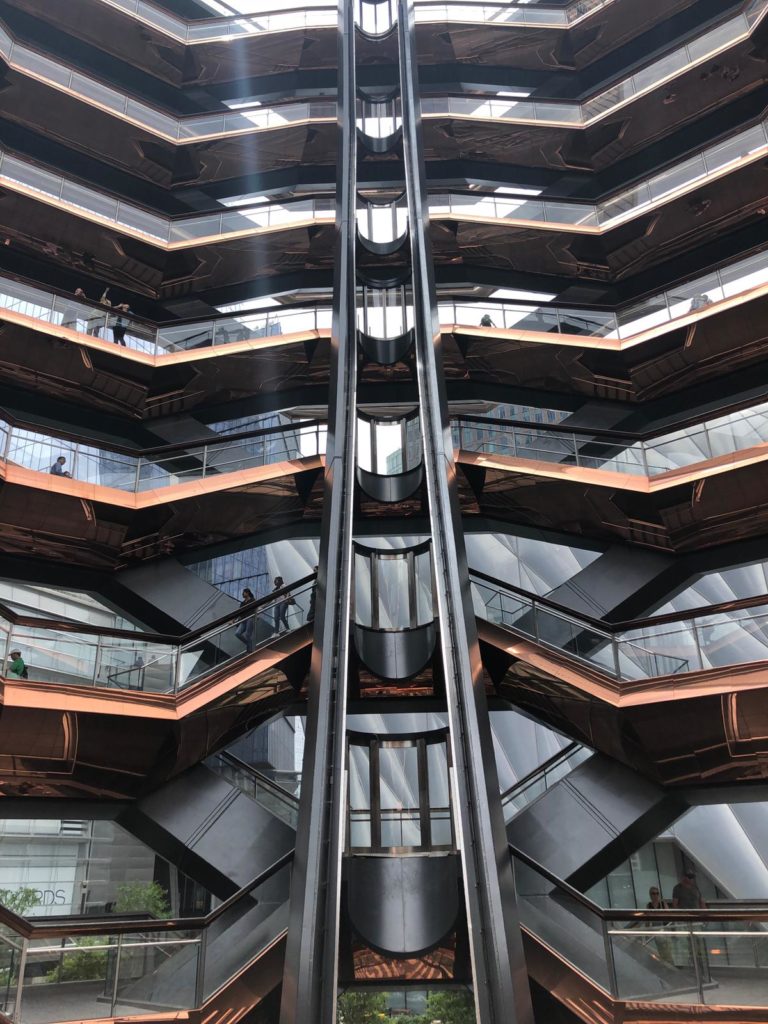 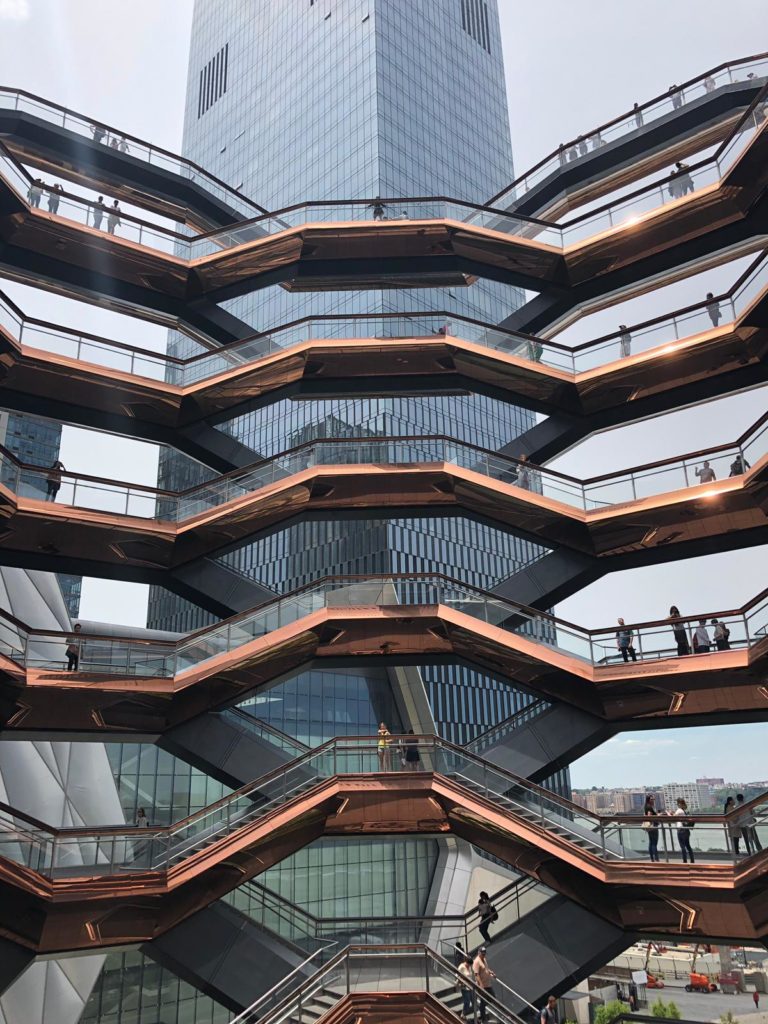 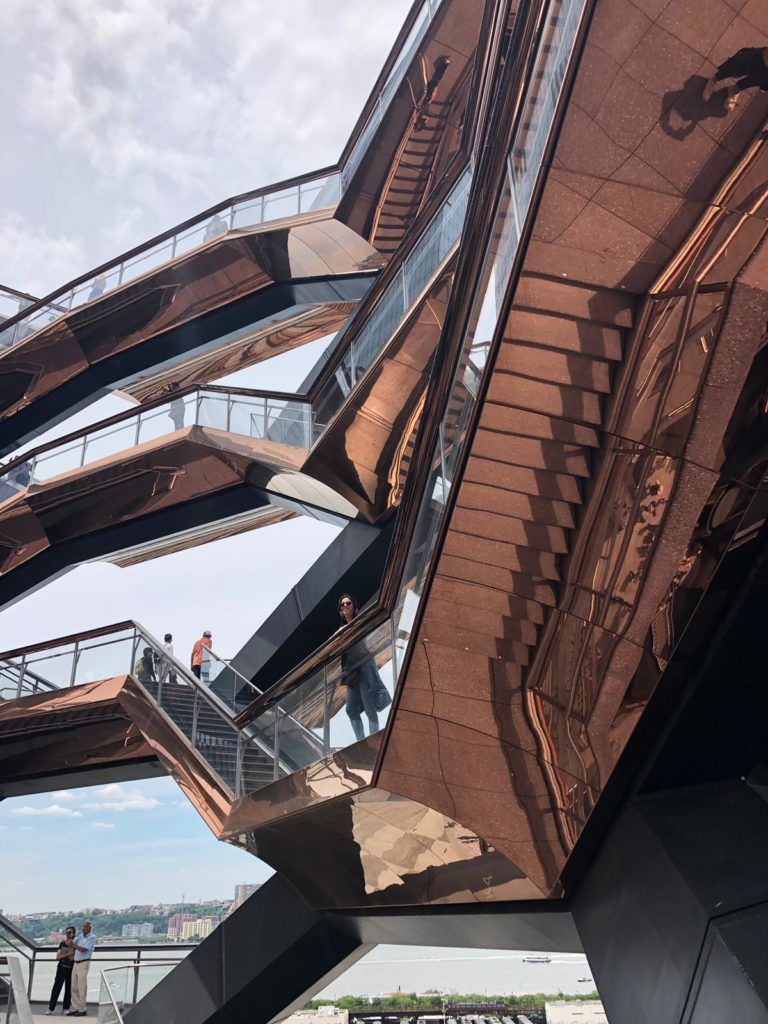 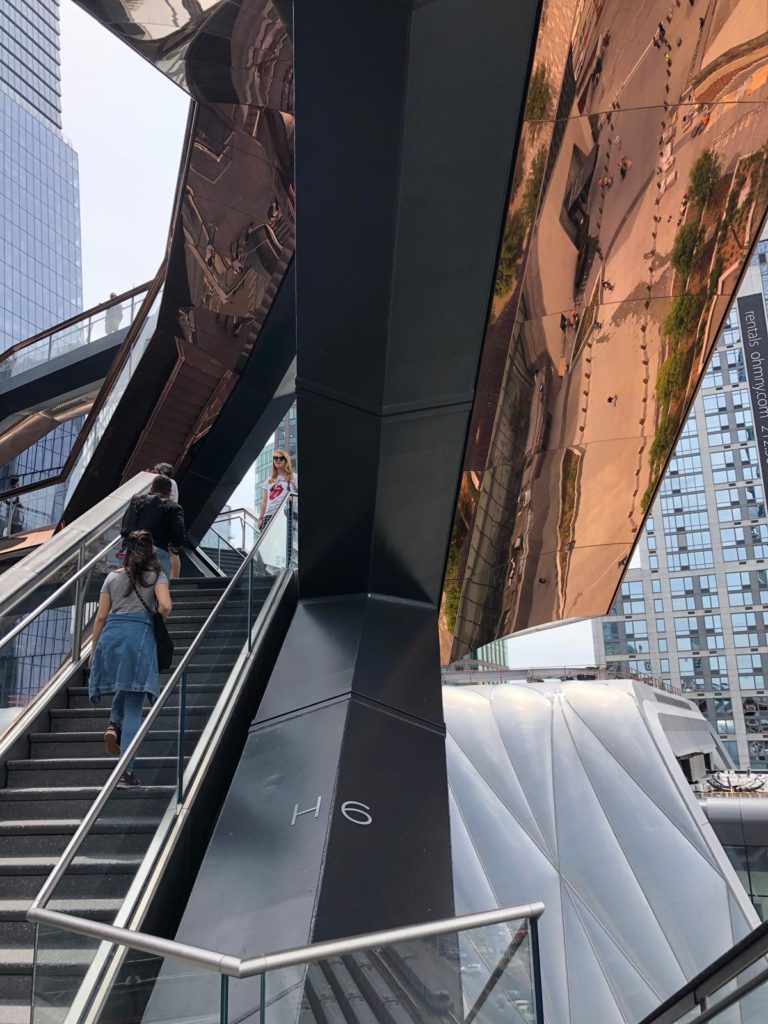 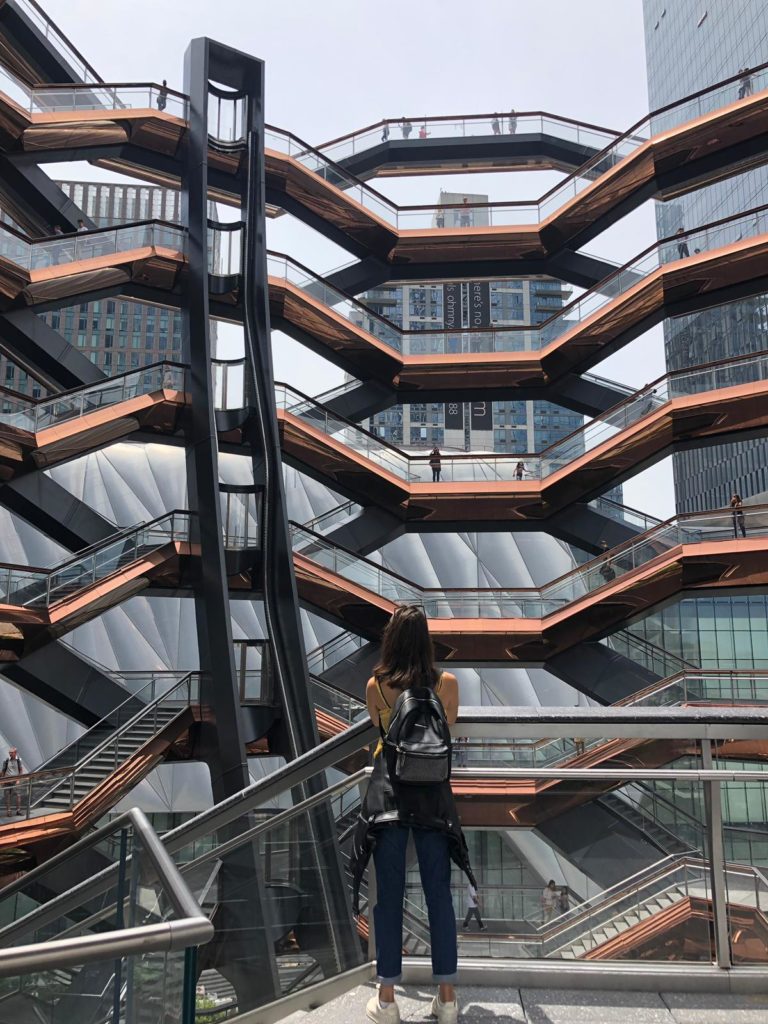 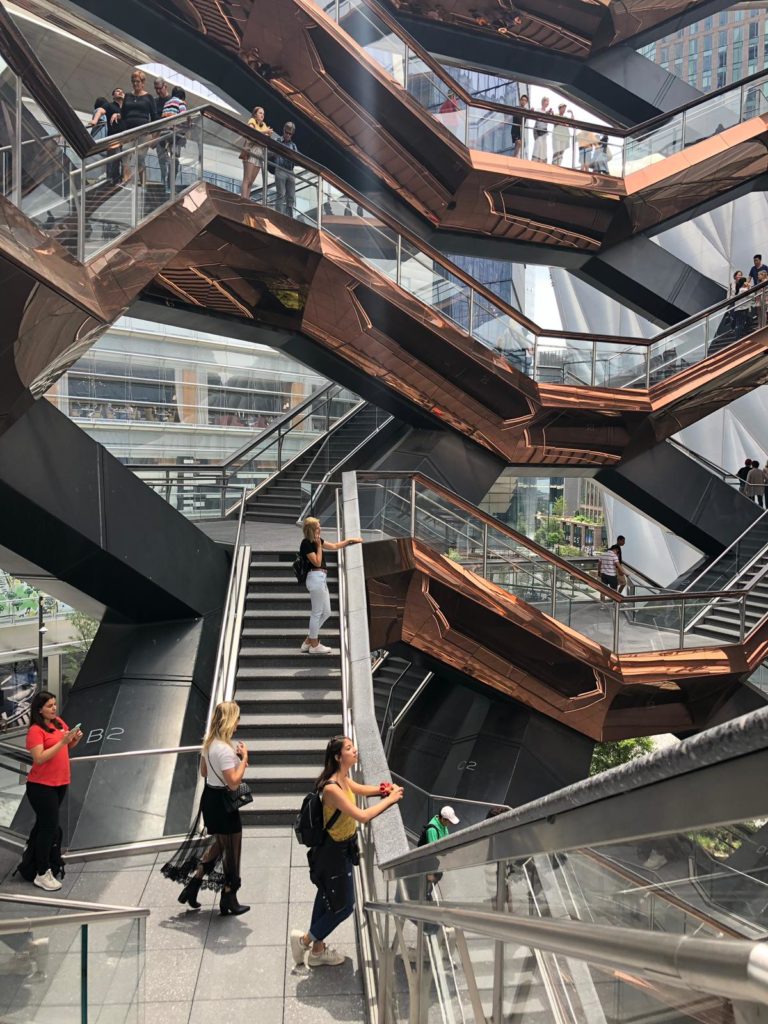 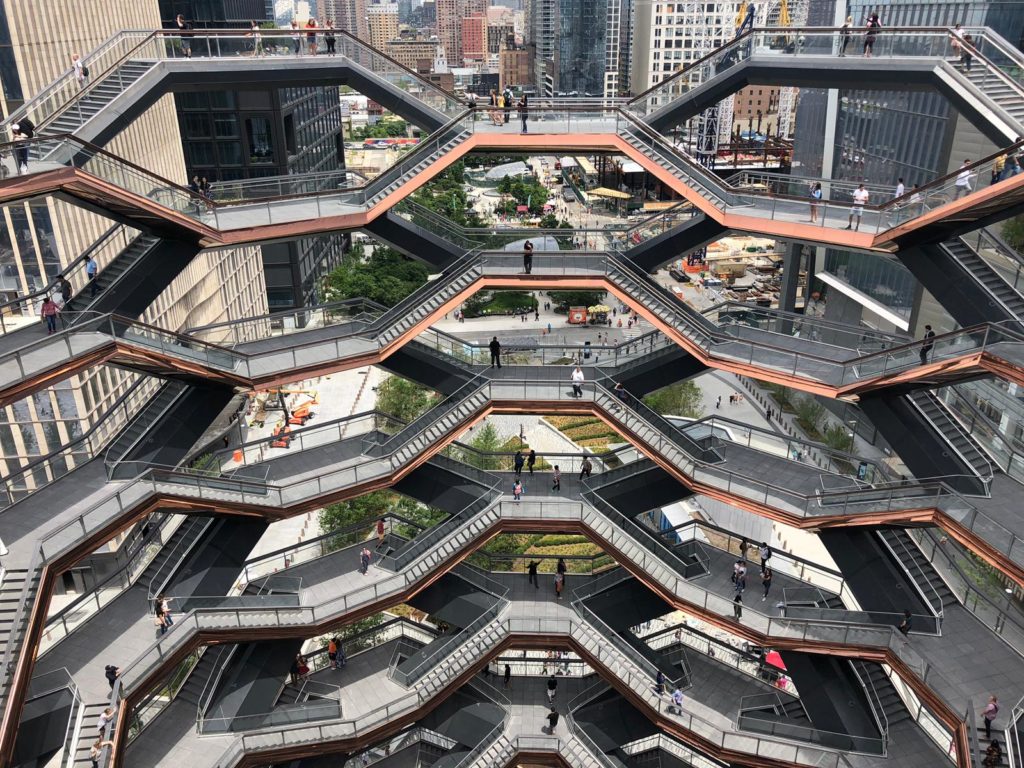 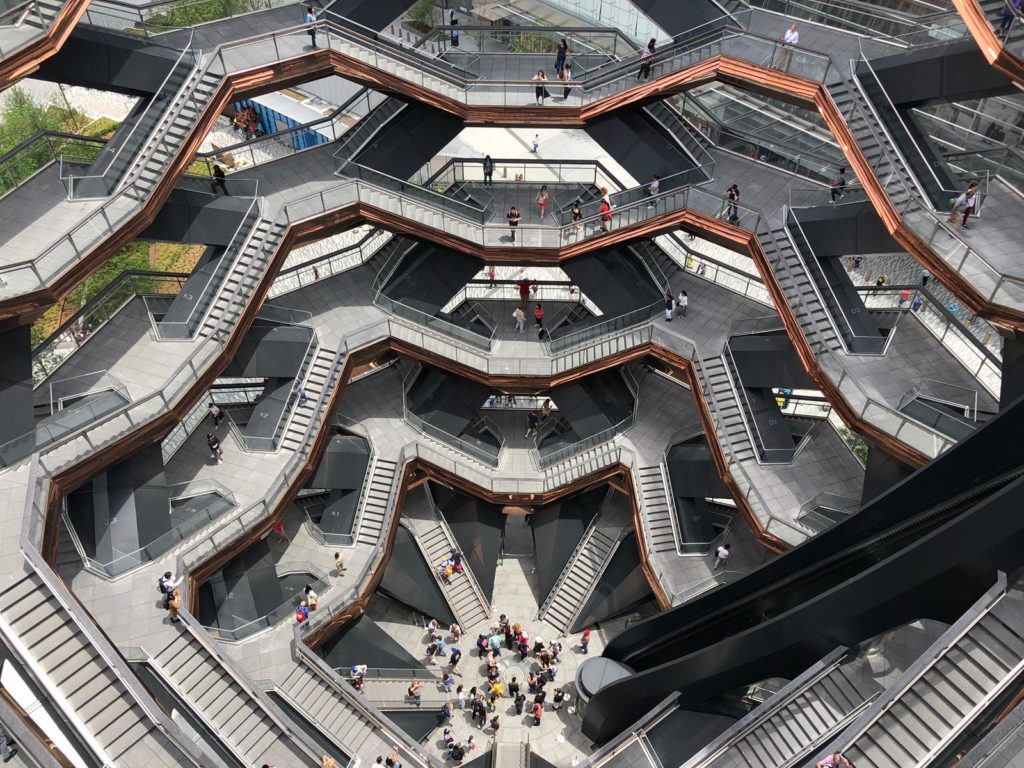 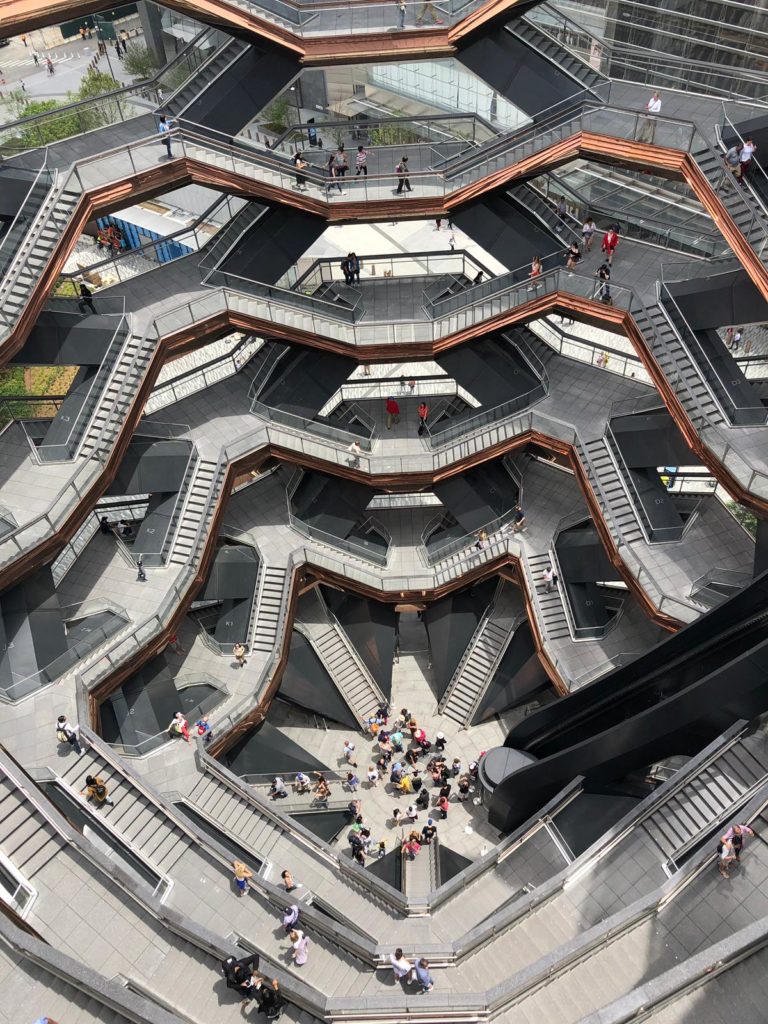 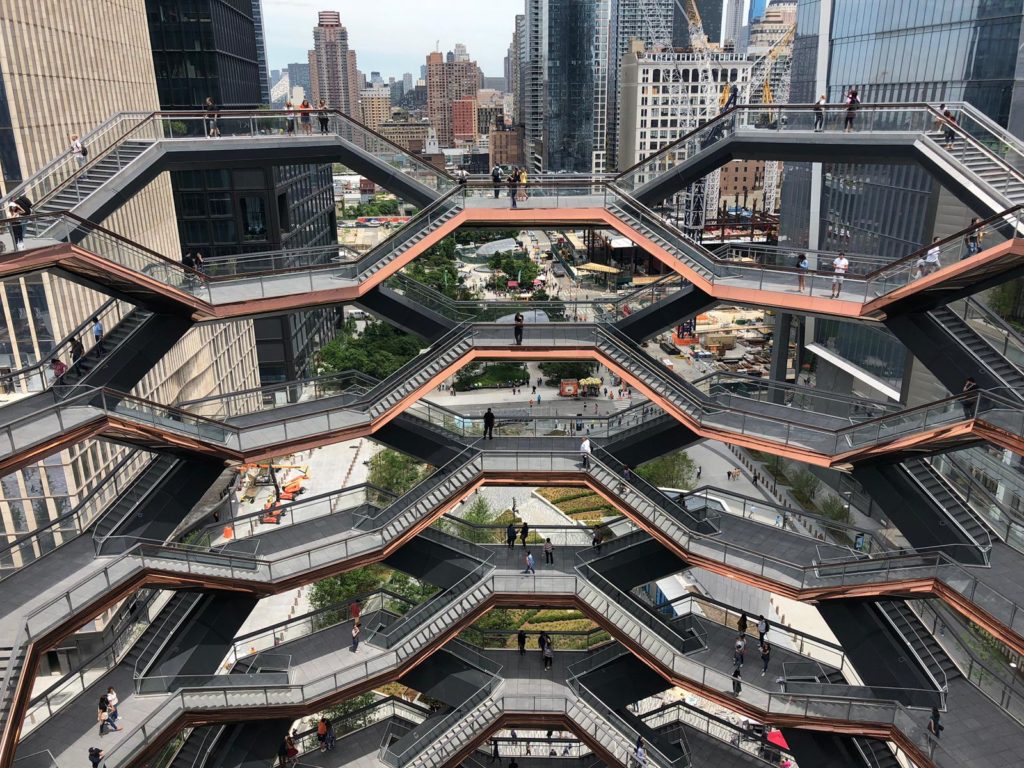 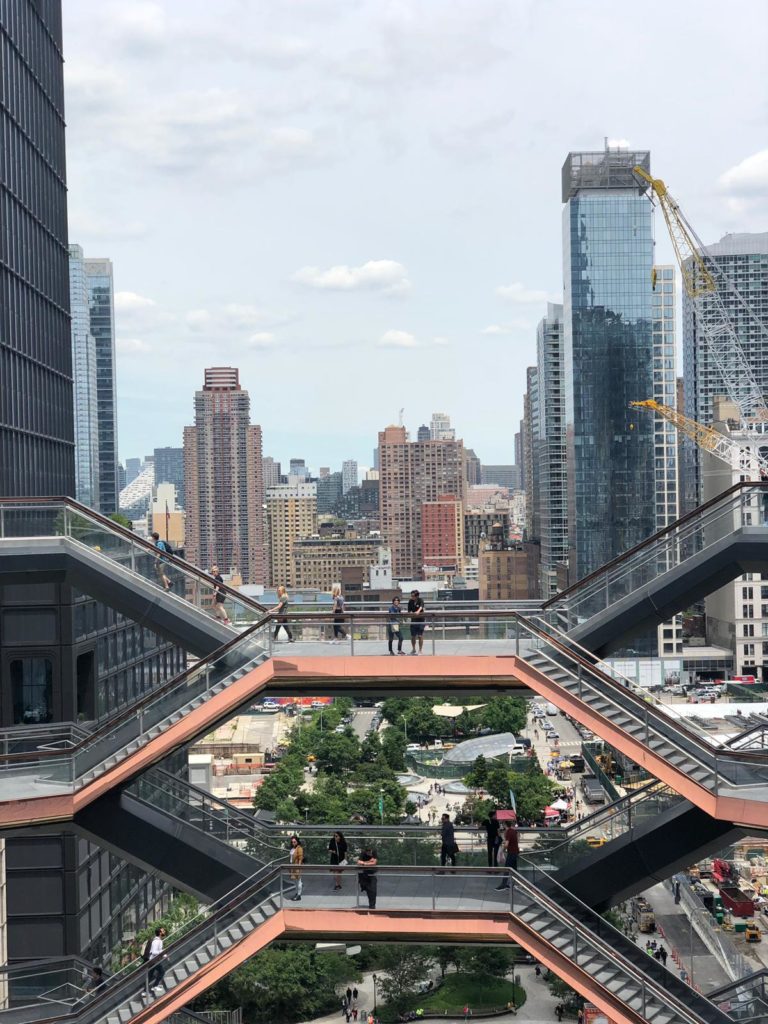 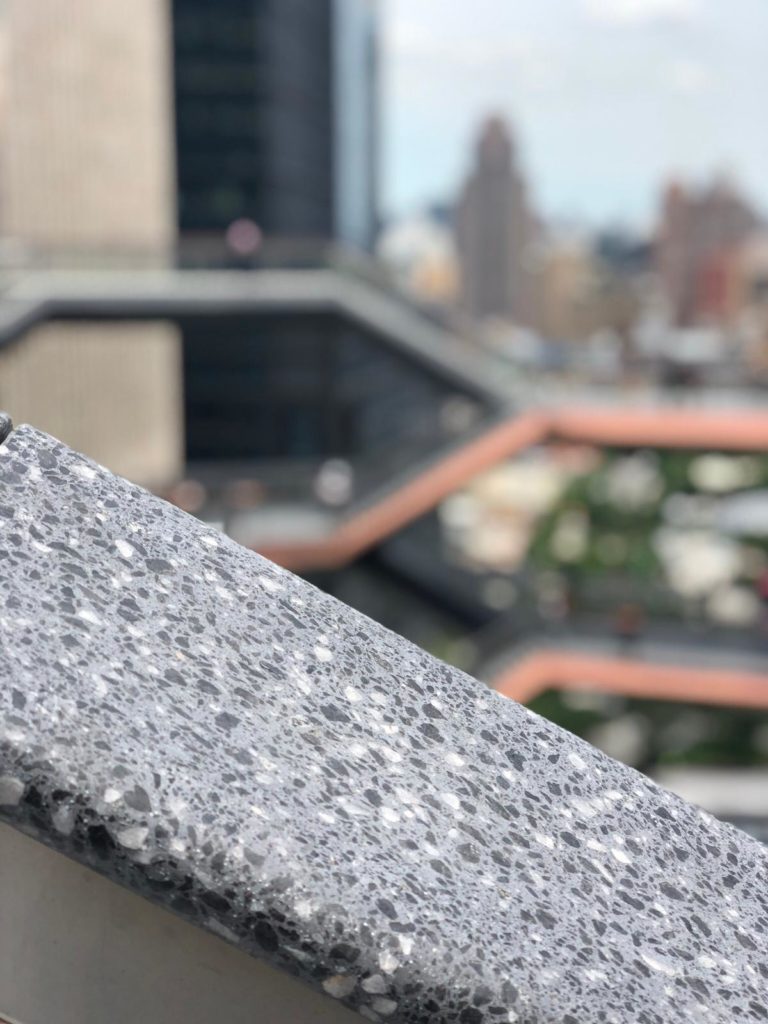