The Showcase Stadium is a prototype that aims to demonstrate the technology, combined with architecture and engineering, will serve to cool the arenas that will host the 2022 Football World Cup to be held in Qatar.

Arup Associates designed the most sustainable stadium in the world for the World Cup 2022. The Showcase Stadium (Estadio Sample), has become a cornerstone of environmental architecture, one of the major drivers in the sustainability plan that provides Qatar world. Together this stage, one of the wealthiest nations in the world by its oil, is willing to pay the best designs sustainable forefront to protect athletes and spectators from the intense heat of the region.

Originally thought in a simple flag to demonstrate some technologies cooling performance, however, after working the client, Qatar 2022, the workshops of Arup Associates, agreed on a radical development focused environment with the idea of ​​using of zero-carbon technologies that would become the differentiator in the supply of this oil-rich country emissions. A key part of the possible candidacy of Qatar was to present the reality of a World Cup responsible, in extremely hot weather, and the ability to overcome these drawbacks and to provide these technologies to other cultures.

Working at a breakneck pace to finish the stage within that FIFA officials were scheduled to visit, this was in full operation over a period of four months, after 8 weeks needed for your design.

The Mini Stadium was built in Doha (Arabic: دوحة, Ad-Dawhah, capital of Qatar., rich thanks to the oil industry, although their economic activities also fishing is country is located in a small Gulf peninsula and in 2009 had a population of 998,651 inhabitants.

This stadium, with zero carbon in construction and future, is a test innovative cooling concept and new technologies in climate control becoming a platform for the development, refinement and application of these advanced technologies through Qatar and potentially in the future, all arid regions.

The stadium has been designed as a hybrid of technologies quick, light construction, combined with local media and vernacular building. The principal ideal is to demonstrate how energy can be considered an integral part of the architecture, engineering and infrastructure, such a large scale as presented in Qatar.

The construction is based on three fundamental concepts:

2- capture and convert the sun’s heat in summer cooling.

3- through photovoltaic panels convert the sun’s energy into electricity not only for the event, but for the entire region.

The Qatar 2022 Showcase Mini Stadium has a capacity for 500 spectators. Under the seats are air conditioning vents. The overwhelming geometric rate of the cover on the roof plays an important role in the sustainability strategy of the stadium. In its construction have mixed traditional ideas, such as building walls and open decks, thus ensuring natural ventilation, with leading technologies in sustainable energy generation.

In its construction has been used and combined two innovative technologies:

Cover broken roof to shade the building and isolate the sun. It is the first roof of its kind and is considered a pioneer in environmentally responsible construction of sports stadiums approach.

Local scientists have developed a “cloud” Floating Stage and blocks sunlight. For Showcase, this cloud is not necessary because its roof formed by triangular panels, can be manipulated as required, either to keep the sun or harsh winds, but always maintaining natural ventilation. If the heat is too strong, the cover can be closed to allow space cooling is performed with maximum efficiency

During the visit of FIFA, with an outside temperature of 44 just two hours earlier, in the field were recorded 23º.

The building offers the most sophisticated techniques to capture and store the sun’s energy. It has a large number of photovoltaic solar panels that feed the local power grid when the field is not in use, avoiding carbon emissions.
Near the building is a “solar farm” composed of photovoltaic panels and Fresnel parabolic concentrating solar energy in tubes, in this case, have water inside.

Michael Beaven of Arup, describes the triple mission of the arena as an attempt to “mix traditional ideas of passive design with innovative technologies to achieve energy savings and a comfortable and attractive architectural design

The innovative and cutting edge system called “solar farm” consists of photovoltaic panels and parabolic mirrors focus solar energy to generate heat to 200 degrees which is then stored in a container for up to 40,000 liters water. This water may be used for regeneration of the absorption chiller. Due to the high water temperature, the danger of flashing by which the system is designed to operate at a pressure of 18 bar, why the container had to be made with a 30mm steel wall. All high pressure auxiliary equipment including pumps, valves, filters, manometers, heat meters and sensors had to be classified as PN40.

The treatment units cold air supplied to the area under the seats of the spectators. This system cools the living area and flows downward to reach the cooling arena players.
Showcase surfaces are designed to retain the cold throughout the match, blocking the heat caused by the lights and participants. The maximum temperatures reached are far below the guidelines recommended by the medical committee of FIFA. 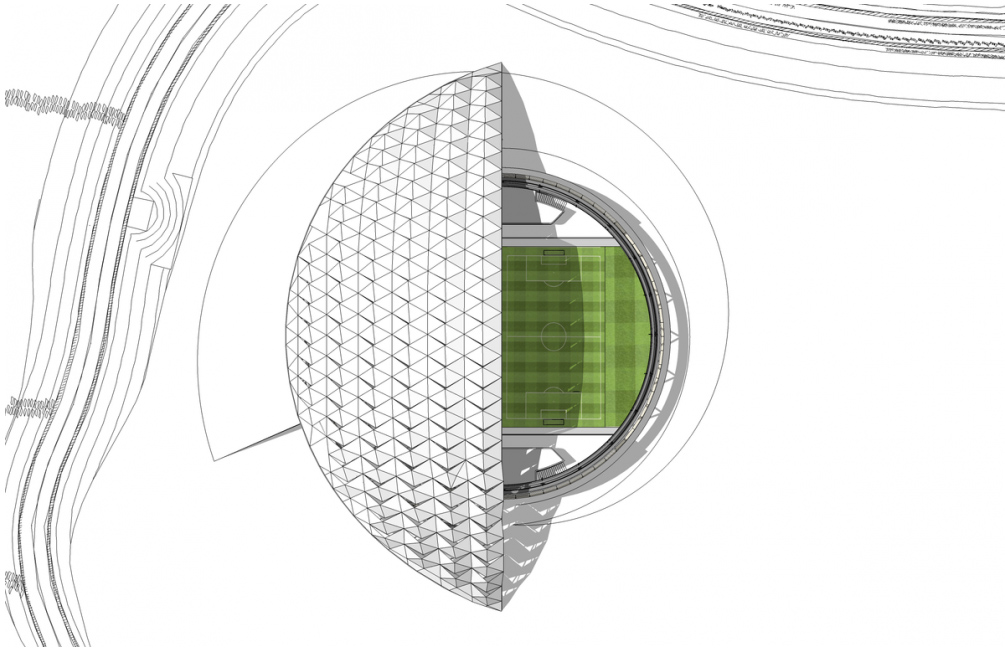 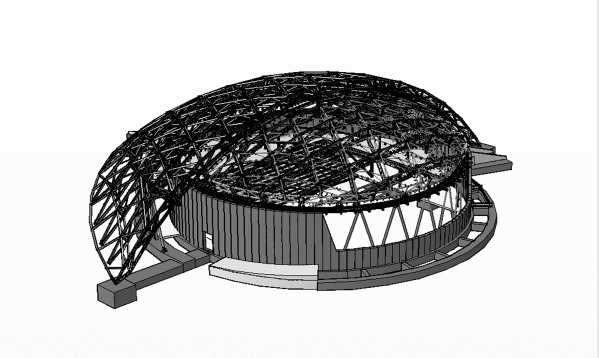 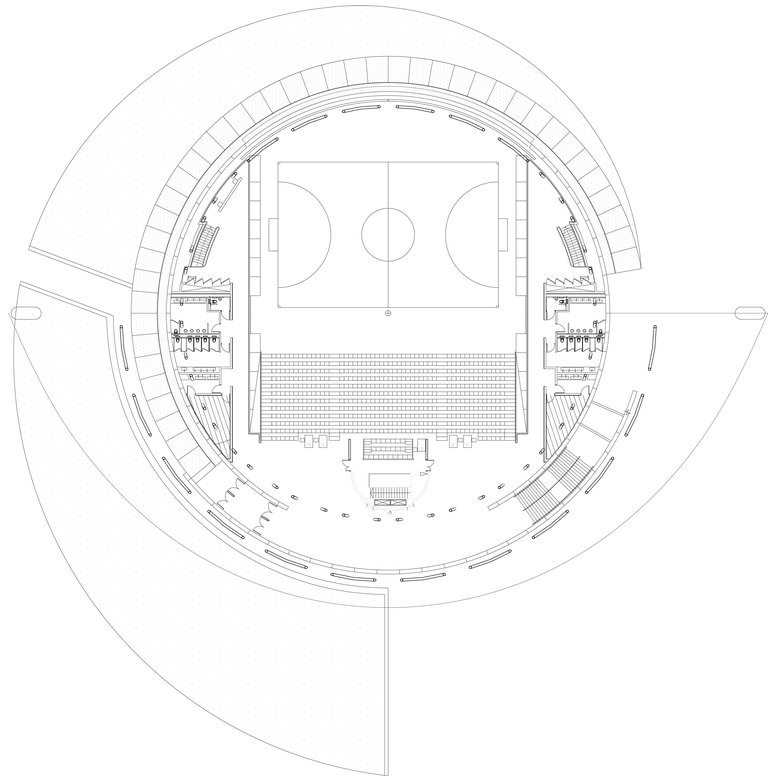 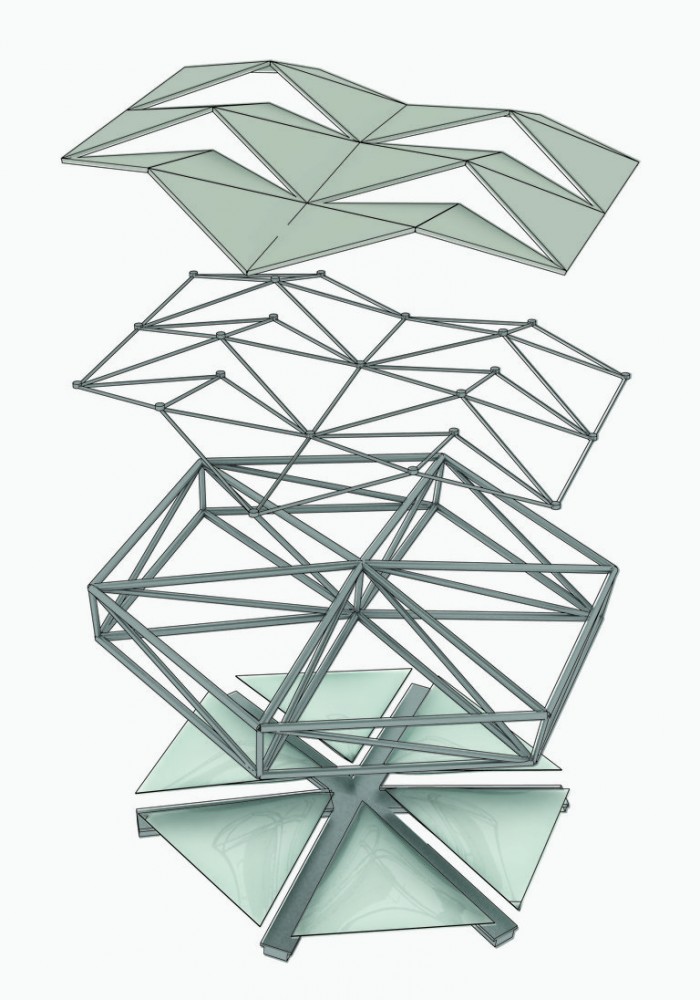 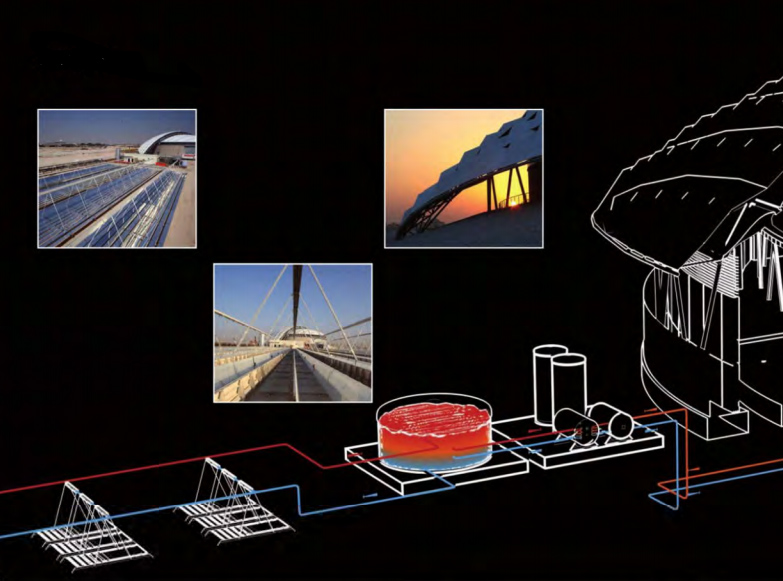 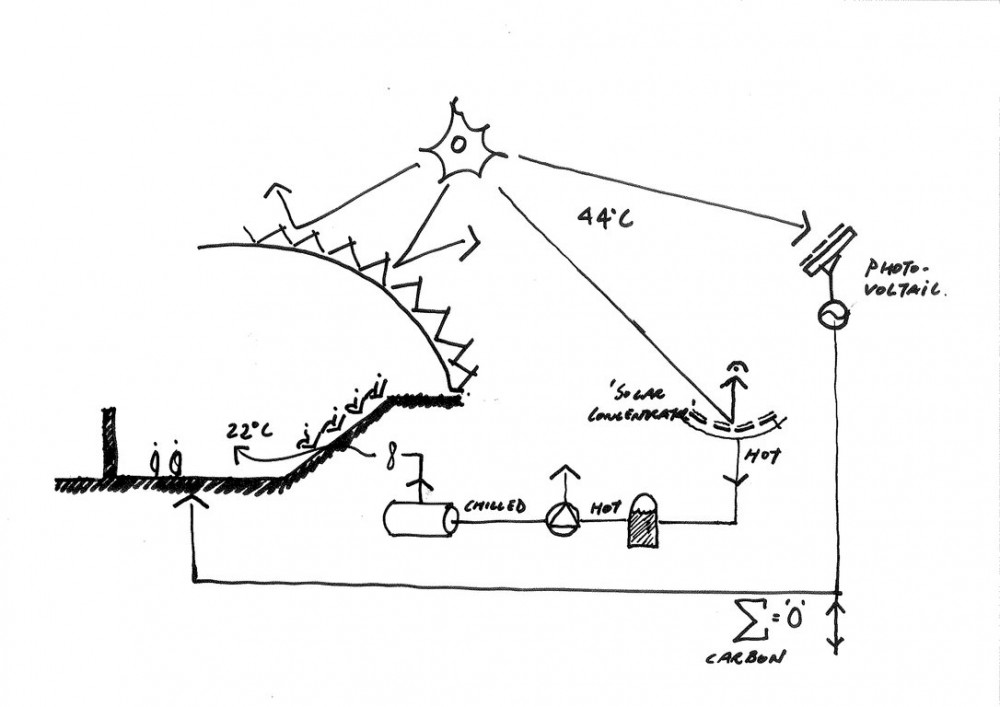 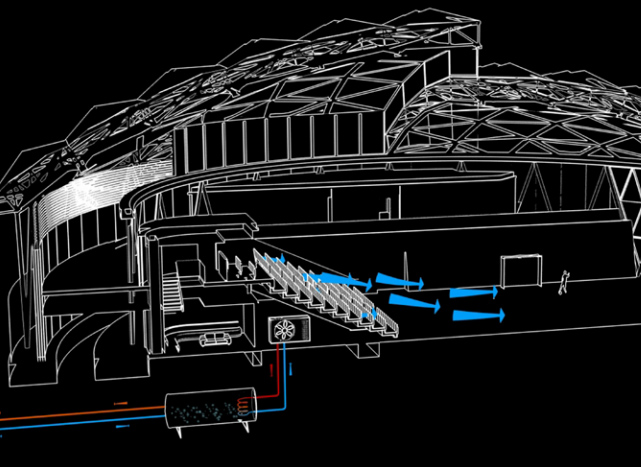 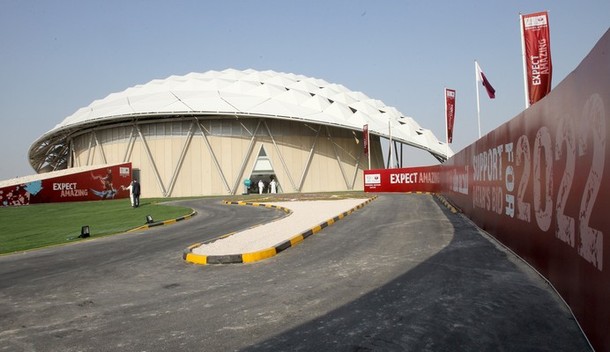 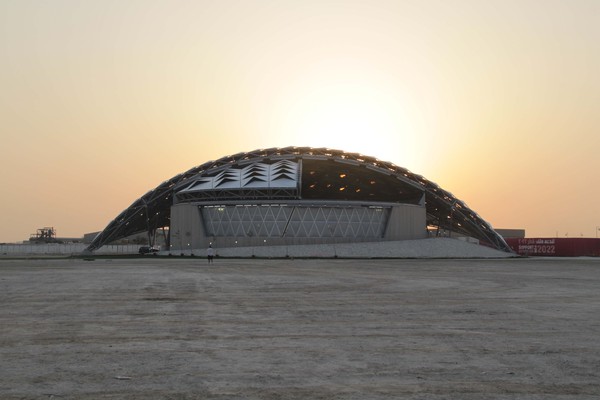 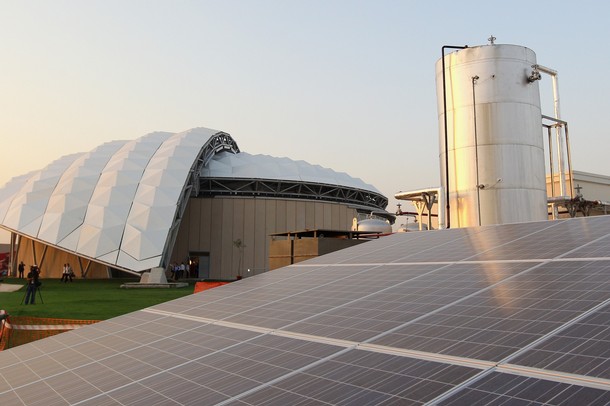 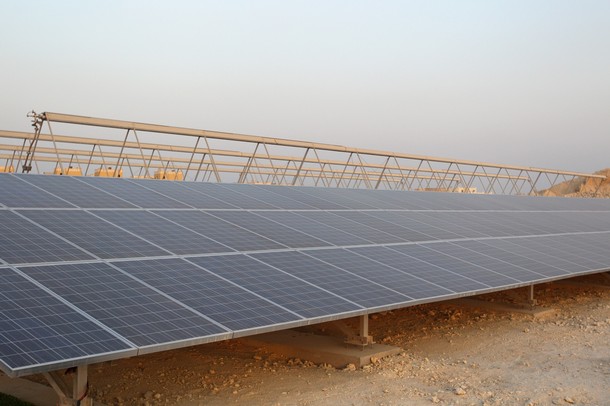 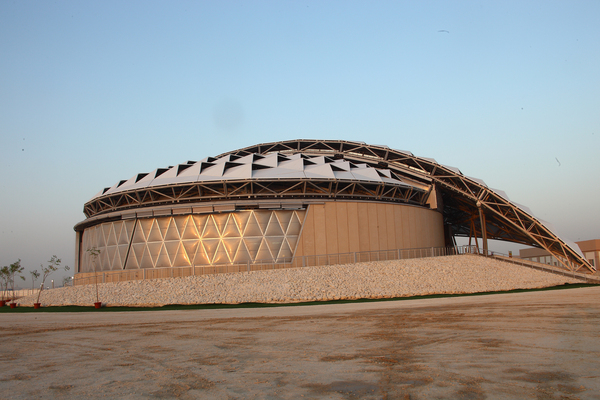 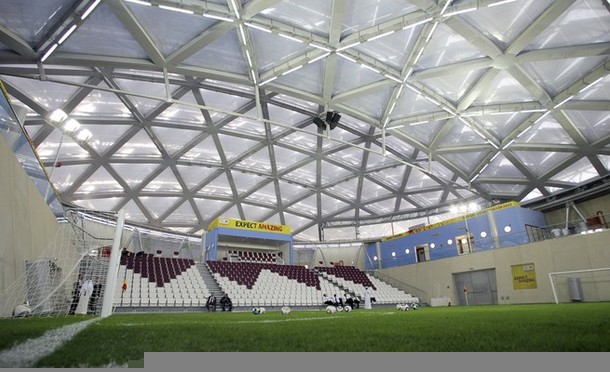 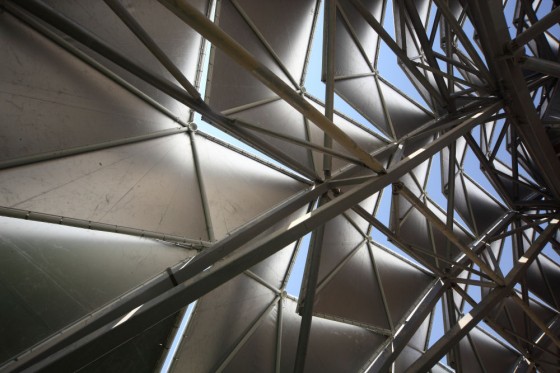 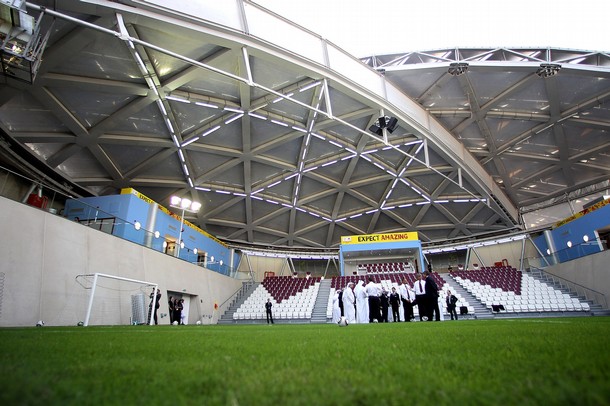 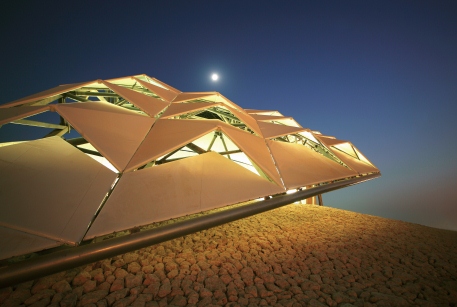 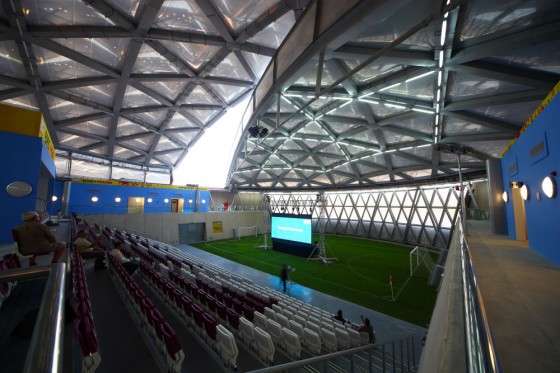 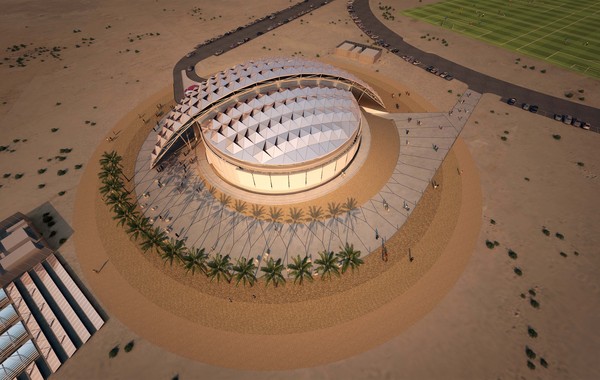 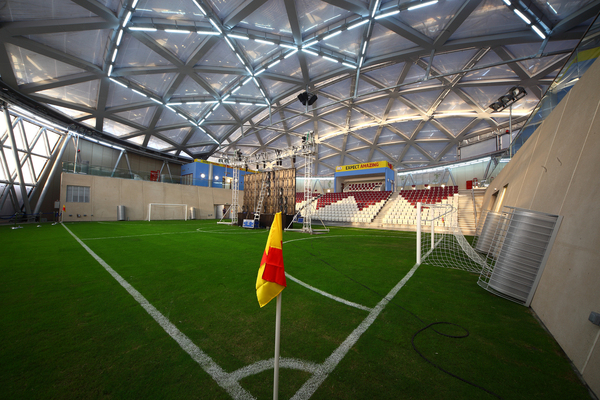 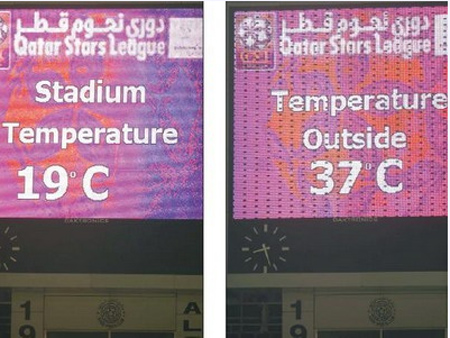 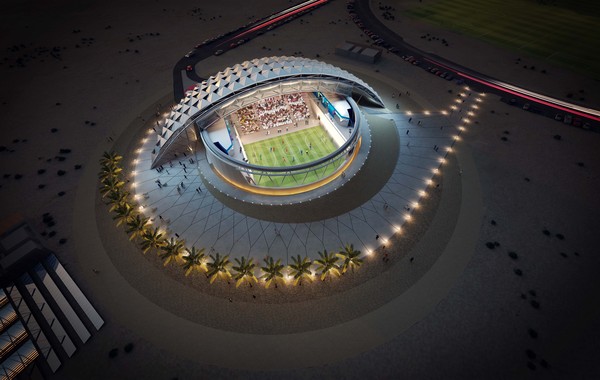 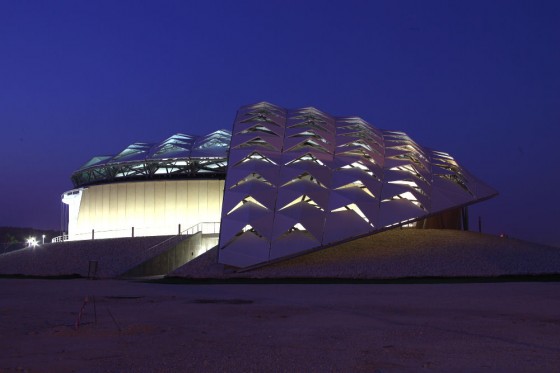