The London Country Council authorized the demolition of buildings belonging to the Economist magazine and Boodle’s Club to make way for the new building, stipulating a ratio of shops, offices and housing.

The London magazine promoted the redevelopment in order to expand its headquarters; the project also involved the neighboring gentlemen’s club, which needed to restructure its facilities and build additional rooms.

Despite the radicalism characteristic of much post-war architecture, the buildings – completed in 1959 to designs by husband-and-wife architects Alison and Peter Smithson – are relatively conservative in appearance, and have proved a great legacy to the city. In 1988 the Economist Group was formally listed as a historic building by the Department of the Environment. 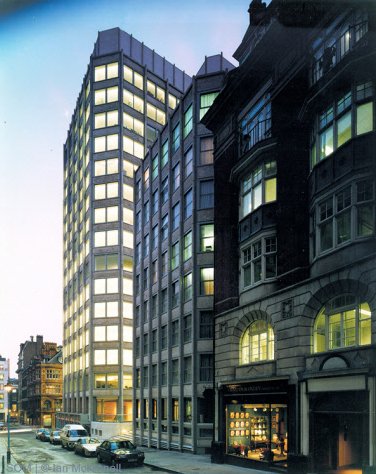 The headquarters of the magazine is located in the heart of London, at 25 St. James’ Street, surrounded by the buildings of XVIII in the English capital.

The solution of the architects to the requirements of the City Council was to present a project with a building for each use that had light and views. It is one of the few projects of the 1960s where the spaces between buildings are as important as the buildings themselves.

In The Economist, the architects showed great restraint, demonstrating its sensitivity and support to an area that resisted the impulse of aggressive commercial monumentalism invaded other areas.

The project is formed by three buildings, one for the magazine, one for the club and a third for housing. The three are grouped around a quiet courtyard, a little high relative to the surrounding streets, along the lines of Seagram Building in New York. 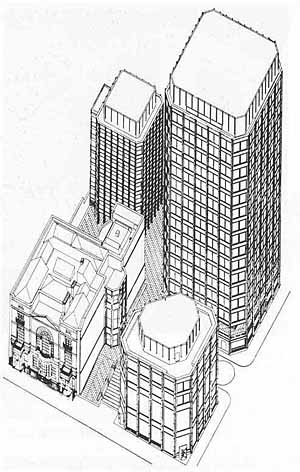 A sketch of the location of the complex

This has its entrance on St James Street. Irregular shaped polygon has four floors and is set to a module of 3.20 meters. The volume you want to be harmonious with the buildings that gave setecentistas Street character and proportion “square.”

This tower of 53 meters 15 plants developed the same number of modules and a posterior vertical branch in the middle of them.

In this building directly adopting a module of 1.60 meters. This gradual reduction and densification of vertical divisions correspond to the urban hierarchy, use and size of the three buildings. It stands 8 floors and is located in the back of the tower 15.

She can be reached from the street by a flight of steps or a ramp. Extends below the Economist building in a slightly higher level than the streets surrounding the complex, offers a pre-pedestrian entrances to buildings and access to underground parking.

As is typical of the work of marriage Smithson, the city is outside the bounds of interior public spaces, but unlike the building Robin Hood Gardens, the building of the Economist offers a space between the man in the street who can choose to find in the city its “secret path”

The Economist The building is a continuation of the structural approach and bold honesty that characterizes its architects, carried forward with great simplicity.

Each of the concrete structures of the three buildings, is articulated with remarkable amounts ranging from the top of buildings to the ground, which occasionally are mounted canted corners. This simple move has the effect of allowing more light to enter the complex, while providing structural openness and mitigates the impact of sharp edges.

In the construction of three buildings used sandstone Portland, rich in marine fossils, known as the “cockroach,” which is of the buildings of a special light. The porous material, with grooves creates textures and recognizes the value of buildings on site

The structure is reinforced concrete with steel beams that serve the structure. Metal frames and large windows make up their facades.