A mid-twentieth century Mar del Plata was a city with very little urban development. The waterfront is characterized by the French style villas, Italian, English and Norman, with a notable influence picturesqueness.

The Catalan architect Antonio Bonet, who in those years worked in the neighborhood of the city of Buenos Aires, takes as its starting point the new Latin American movement within an international context of deep crisis, where architecture goes in search of functional responses. The times of war, political changes, the new and entrenched capitalism and demanded housing problems of building a new structure along with an increase in consumer goods. In those years there was an urgency to understand architecture as a tool for social transformation.

Thus creating a new vision of the outside of buildings, where the prevailing values of the new spaces over the prospect or the order of the facades. The Palace Terrace is related to one of the models of “dwelling unit” proposed for the Plan of Bajo Belgrano (Buenos Aires, 1949) and the Algerian projects of Le Corbusier (L’Oued-Ouchoia, 1933).

The Palace Terrace, now declared a National Historic Monument, is one of the few works of Mar del Plata of the twentieth century that were designed in harmony with the environment, while still today, an example on how to respect the maritime landscape of the city.

Bonet’s attitude is heroic when taking into account the pressures imposed on real estate area. Dragging them wrong decisions, both economic and ecological terms of the owners of low buildings that are located behind the great monsters that grow to a height of 40 stories from the sea. Bonet designed the Palace Terrace in order to generate a prototype for high-rise buildings facing the coastline. Unfortunately, his example was not followed.

Bonet’s proposal results in an unprecedented model of collective housing in the local production of those years. In historical terms, is the first example of modernity breaks with the tradition of the villages near the coast. A contemporary delight, designed by a genius more concerned with the elegance and harmony on revenues of speculation.

Interestingly enough, in Mar del Plata, the building is known as “the typewriter”, a baptism that took more widespread than the real name. That name originated when tour guides in tours to the port passing by. Unpopulated area with other buildings, the work attracted attention. In the absence of information about said (wrongly) that was shaped like a typewriter because the company was owned by Olivetti.

The construction was carried out between 1957 and 1958 and the builder was Dante Bernasconi. Its sales slogan in ’60 was “seize the floating gardens facing the sea…”

The building housed the Maritime Boulevard, overlooking the terraced garden of the cliff facing the sea.

The site is located in corner position.

While currently Playa Grande is one of the most expensive areas of the city and large farm estate, with high towers in 1957 was an area with little urban development, housing occupied by only a few casualties.

I raise accompanying the topography of the landscape, with a steep slope towards the sea in the form of tiered garden.

The appeal of going staggering levels allows all departments to have an excellent lighting and its cone of shadow on the beaches have dropped considerably.

It distinguishes a rigorous compositional order and a collection of elements as brisoleis modulated, columns and concrete slabs.

It relies on one of the medians, leaving free the other three sides.

The project is defined in eight levels, developed in the form of balconies that recede from the municipal building line as you go up a level. The staggered start on the third floor of houses.

The ground floor contains a large hall and several green areas glaze. Based on the Mediatrix parallel to the sea, is occupied by a strip of houses.

The plants are arranged housing from three vertical cores that address access to two apartments each.

The step on the waterfront provides an excellent lighting departments. The subsequent illumination of the plants was determined with double-height courtyard.

Each department has its expansion toward the coast, framed by the front brisolei or parasol. Originally, terraces and gardens were designed, but were replaced by conventional floors because the maritime climate is not suited to maintain the vegetation conditions, especially rainfall, in addition to constants, not enough to fully drain.

In building access are two wonderful BFK chairs, designed by the architect Antonio Bonet, Jorge Ferrari-Hardoy and Juan Kurchan. The prototype was developed in 1939 and quickly became an icon for modern interior spaces. Since 1950, the chair is part of the collection of the Museum of Art, New York and is included within the 100 best industrial designs of modern times, according to the Institute of Design at the Illinois Institute of Technology. 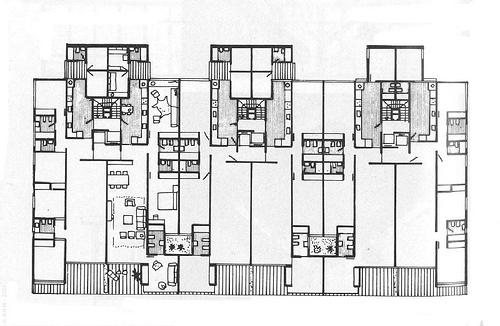 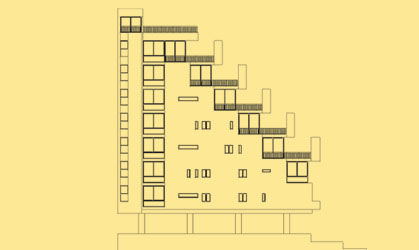 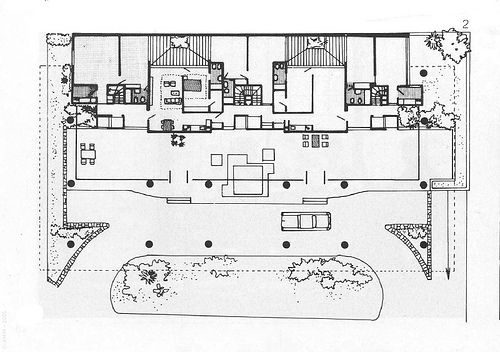 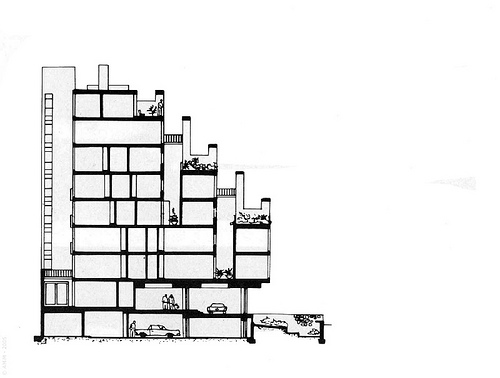 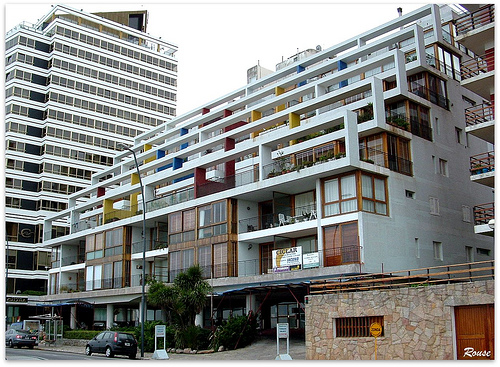 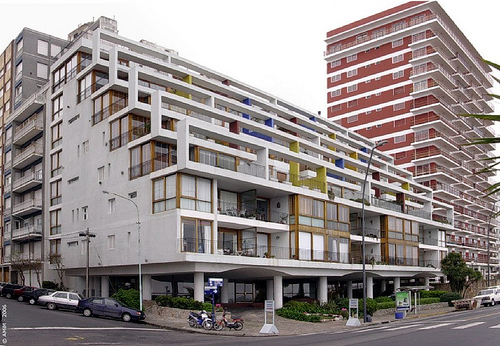 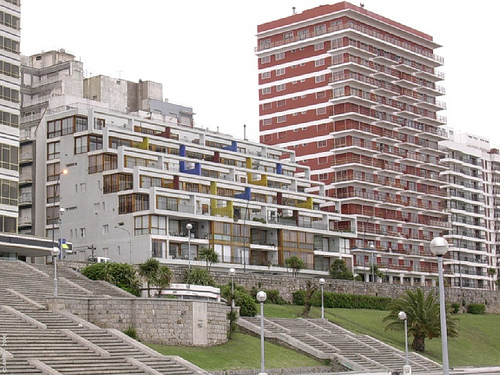 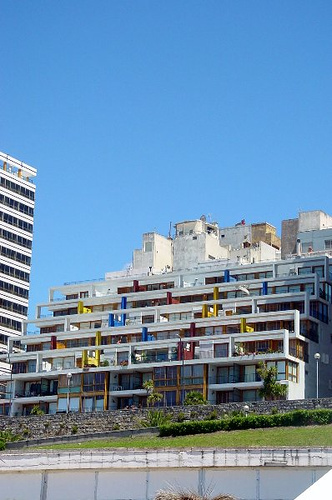 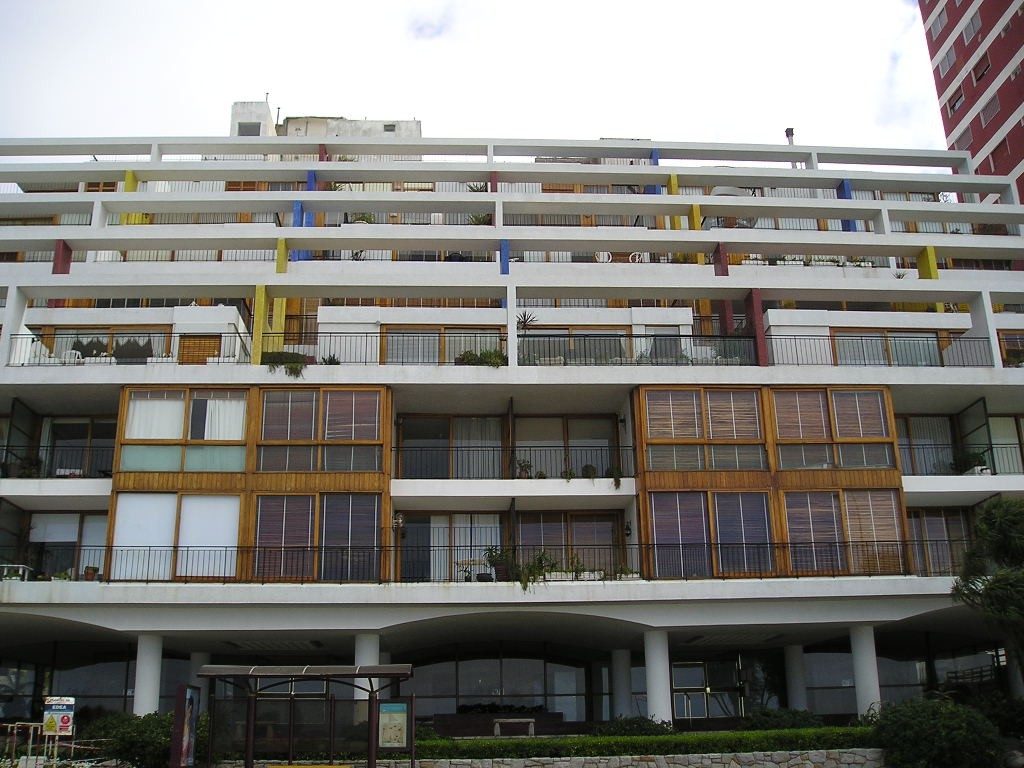 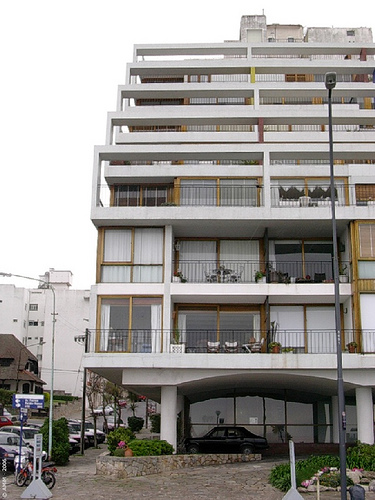 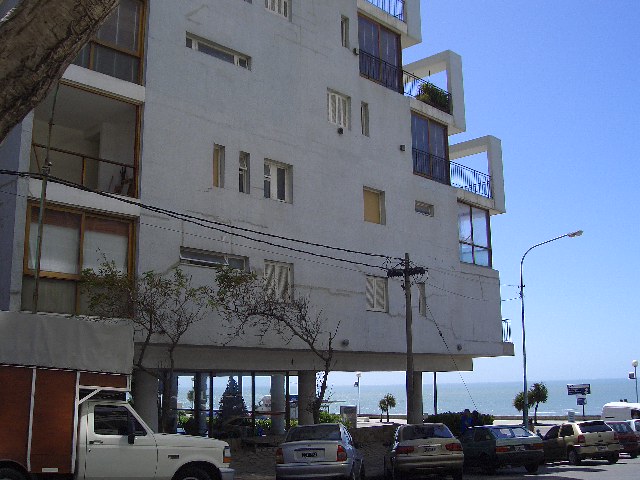 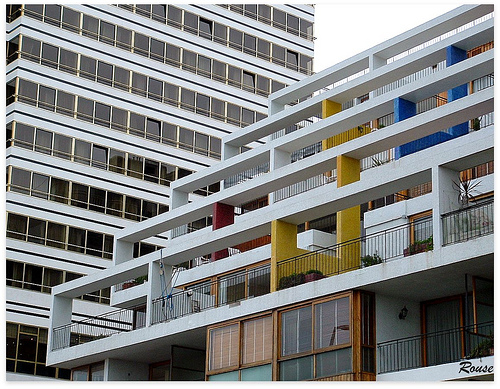 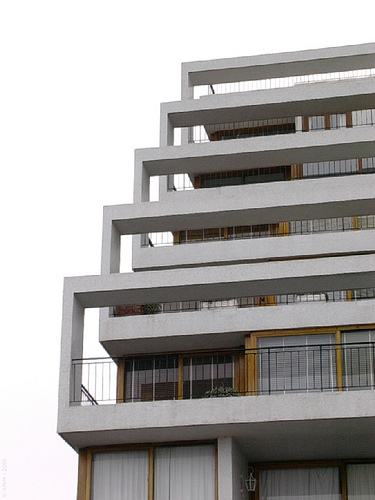 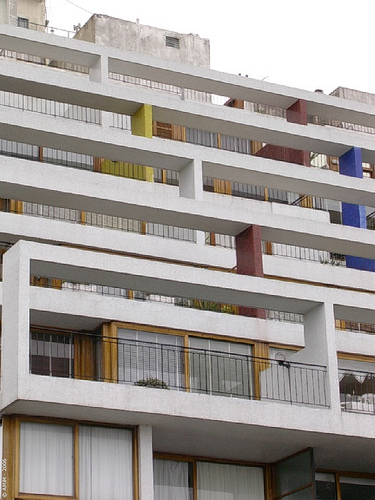 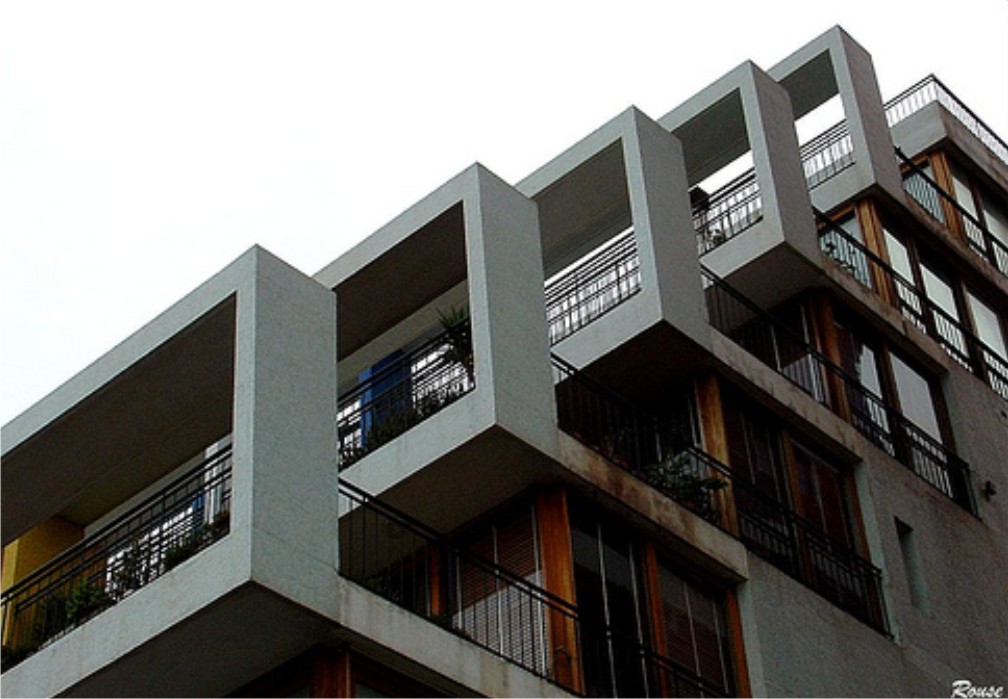 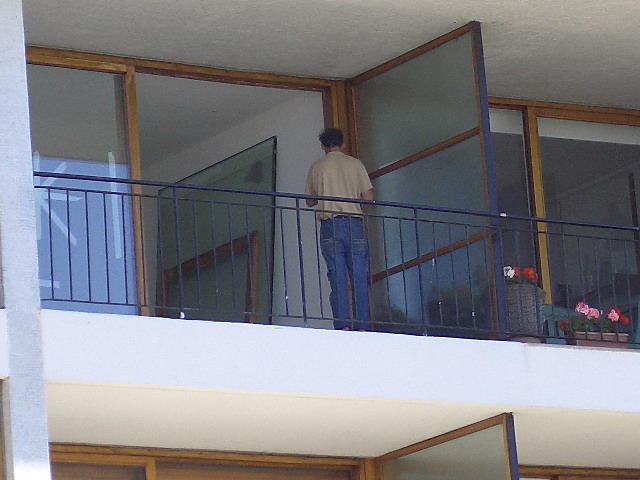 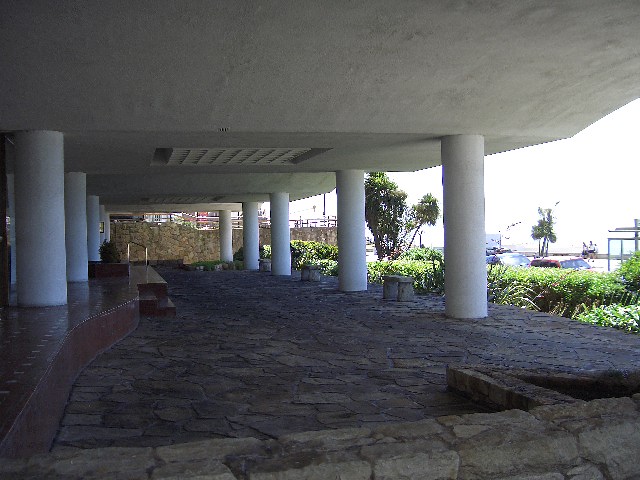 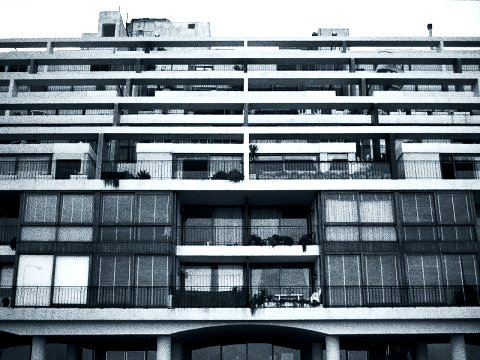 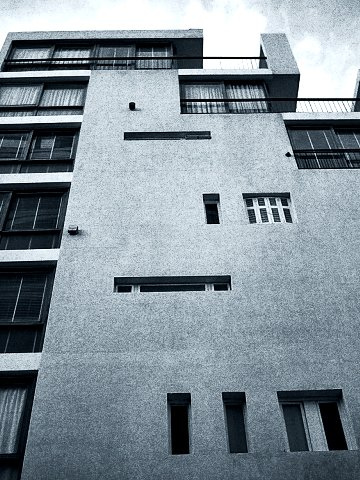 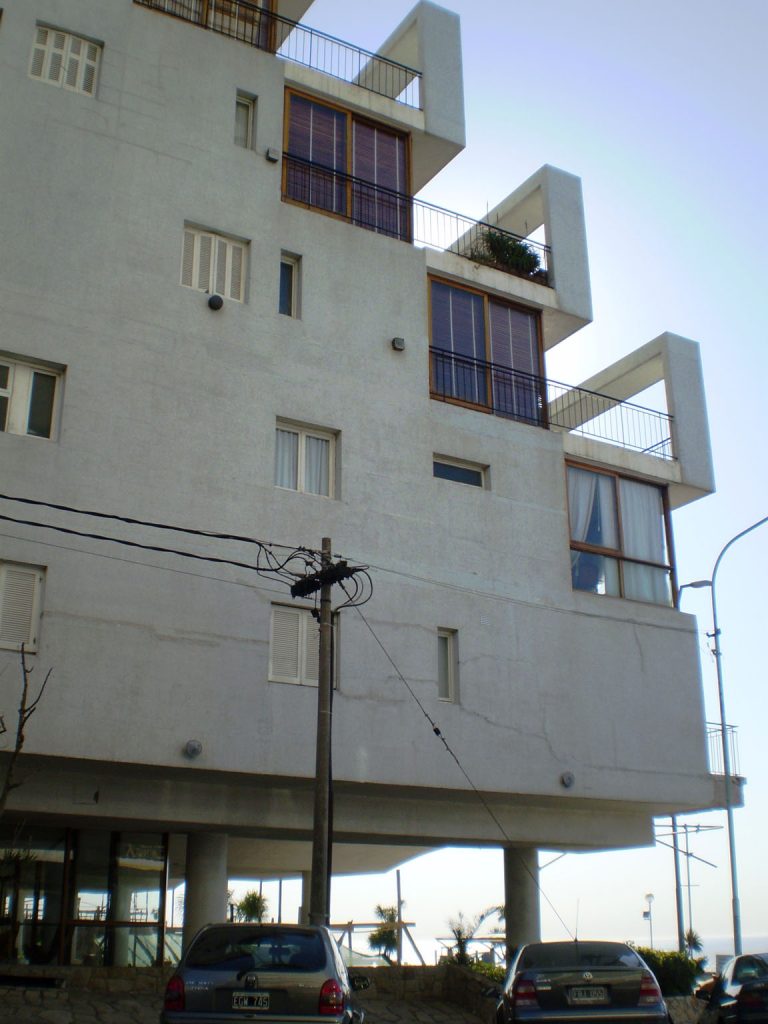 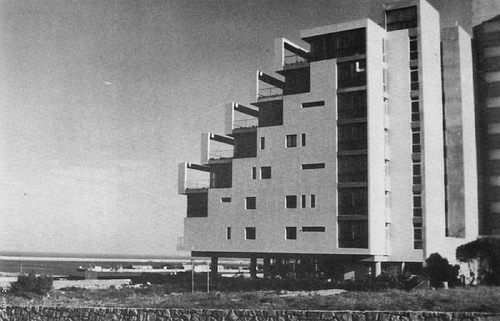 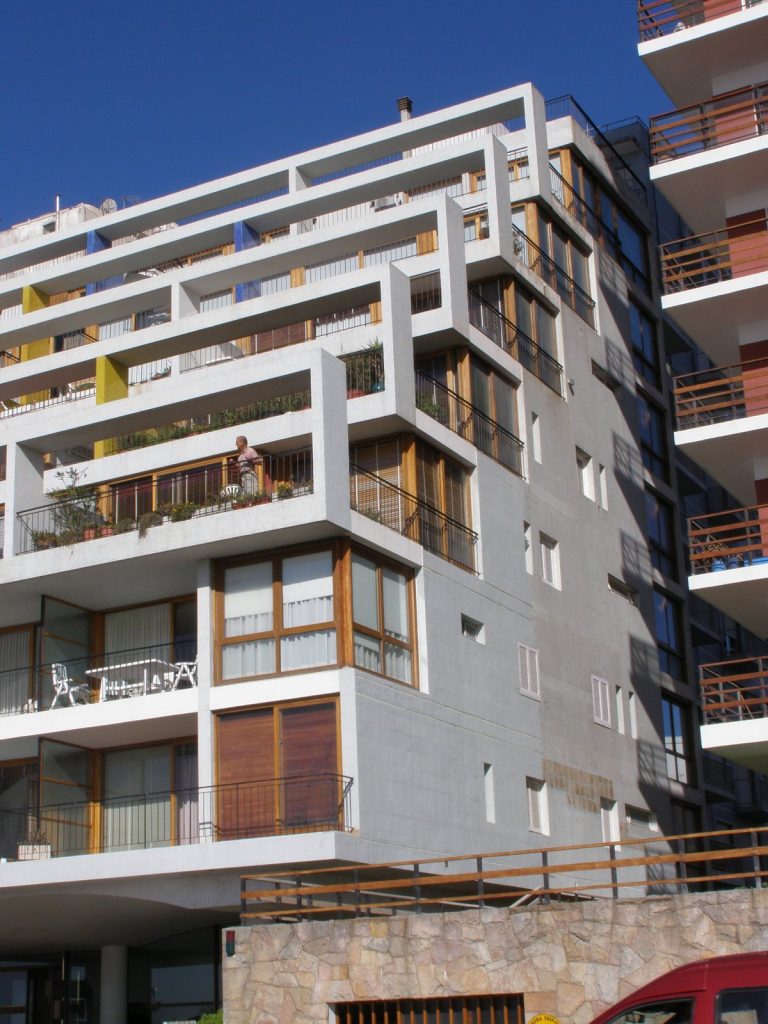