The Temple of Olympian Zeus, also known as the Olympieum, Corinthian temple is the largest of all the Peloponnesus.

Although started in the sixth century C., with the first foundations laid by the tyrant Pisistratus, the work was abandoned when his son Hippias was overthrown in 510 BC and not completed until the reign of Emperor Hadrian in the second century.

In the Hellenistic and Roman times was the largest temple in Greece. During the years of Greek democracy, the temple was left incomplete because it was thought that threatened the “hubris” to build on such a scale. Aristotle, Politics, cited the temple as an example of how tyrannies attracted the people to great works of state and left them time, energy or means to rebel.

The work was resumed in the third century C., during the Macedonian domination of Greece, under the patronage of the Hellenistic king Antiochus IV Epiphanes, who Cossutius Roman architect hired to design the largest temple in the known world.

When Antiochus died in 164 BC C. the work was delayed again. In 86 BC C., after Greek cities fell under Roman rule, the general Sulla took two columns of the unfinished temple to Rome to adorn the Capitoline temple of Jupiter on the Capitoline Hill. These columns have influenced the development of the Corinthian style in Rome. In the second century, the temple was taken up again by Hadrian, a great admirer of Greek culture, who finally led to his conclusion in the 129 (some sources say that in the 131).

Hadrian dedicated the temple to Zeus, king of the gods. He raised a giant statue of gold and ivory of Zeus in the cella, and placed a large equally close to it himself. No rest from them or from inside the temple has survived.

It is unclear when the building was destroyed but, like many large buildings in Greece is likely to be during an earthquake in the Middle Ages. Most of its ruins were used as building materials.

Located some 500 meters southeast of the Acropolis in Athens and just 700 meters from the center of Athens (Syntagma Square), one arrives at the crossing a typical Greek quarter.

From this historic site can see the Acropolis, and is very near the arch of Hadrian. The temple, along with the surrounding ruins of other ancient structures, is a historic district administered by Ephorate of Antiquities of the Greek Interior Ministry.

When in the third century A.C. the works were resumed under the auspices of the Hellenistic king Antiochus IV Epiphanes, it Cossutius Roman architect hired to design the largest temple in the known world.

Pausanias describes the enormous dimensions that it had completed the temple once: “The temple is peribolos four stages and is covered with statues, as each city of the Athenians called colonies have dedicated there a statue of the emperor Hadrian ( Pausanias, I, XVIII, 6)

Regarding the structure of the temple was built in marble from Mount Penteli, had 104 giant Corinthian columns of just over 17 feet high, of which 48 were placed in triple rows under the pediments and 56 in double rows on sides. Its base rectangular cella, measuring 96 meters long on equipment side and 40 meters in the eastern and western sides, informing its side with the pronaos or porch. 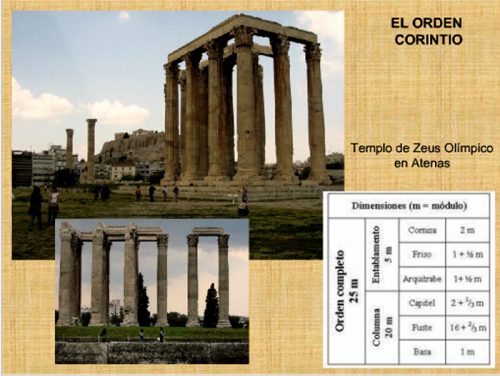 With the construction of the Temple of Olympian Zeus in Athens was used for the first time the Corinthian capital, which is a new architectural order, by including a decorative variant. The Corinthian order, only the Ionic order structurally changed as far as height is concerned, in the capital and greater wealth ornamentaria.

The Corinthian columns are more slender than the Ionic, higher with respect to width, and thereafter will be disseminated throughout the Roman art. The bell-shaped capital is formed deep with acanthus leaves and small swirls in the upper corners.

There is also talk of an order cariático, named for the use of female figures (caryatids) usually carry a basket on her head, and replace those columns.

Of all the columns left standing only fifteen. The sixteenth was shot down during a storm in 1852 and is still lying where he fell. Some of the missing are falling around, and other building materials were used, when in the Middle Ages used the temple as a quarry.

We can imagine a bit as it’s temple, thanks to its metopes still remain, representing the labors of Hercules. We can also discover their pediments carved in marble.

Hadrian ordered the illustrious Pheidias crisoelefantina make a great statue of Zeus, and a hers who was next.