“… The building emerges from its urban context, influenced by the very steep roofs and verticality of the residential buildings of the city, the monumental vertical ornaments of its neo-Gothic churches and heavy volumes of his classicist buildings by all the towers that dot its skyline and its harbor cranes. With an expressionist mentality, we have tried to use geometry to shape a new rhythmic composition that conveys feelings balancing massive and verticality. The use of glass in both highlights how exterior coating materials in the building contrasts with the conditions of their environment. A bright, clear, straight object is created. Building interiors are simple, its maximum defining feature are the large skylights. The great symphony hall differs from these in that it is a sculptural object, embedded in a space-mineral just outlined… “(Barozzi Veiga)

The new Szczecin Philharmonic, Poland, is located in the historic place occupied by the “Konzerthaus” building designed by Franz Schwechten in 1884 and which served as a concert hall and music center of the city until the Blitz during World War II left useless structure. With the choice of this site for the new building of the Philharmonic an urban corner is recovered in a neighborhood near the historic center, in one of the emblematic corners of the Polish city, street corner Jana Matejki Małopolska, with the main entrance at 48 Małopolska street.

Szczecin, along the southwestern shore of Lake Dabie and on both sides of the Oder river is the capital of the “voivodship” Western Pomerania in Poland.

New concert hall for the Philharmonic of Szczecin has white glazed blocks with pointed roofs, and a facade formed by a glass cover mounted on a steel structure. Based on a simple concept using simple materials and architecture explores the connections between past and present, referring to the shape of a typical European urban development.
Szczecin Philharmonic is the new architectural icon of the city that has been well received by its residents.

The building stands as a huge compact, white and bright, somewhat reminiscent of a large block of ice. It hosts a symphony hall with capacity for 1,000 spectators, a hall for chamber music for 200 spectators, a multifunctional space for exhibitions and conferences, and a large lobby.

The composition of the plant is defined by a ring covered numerous perimeter and two steep water, some are large skylights, which highlight its verticality and make prevail the geometry of the roof.

The perimeter that houses mainly service spaces, defining a large gap within which gravitate the symphony hall and the chamber music is solved with a double facade. The outer skin of glass and metal slats shows small recesses and projections, which give character to all the work, each marked up by either acute pitched roofs and few openings for windows. The space between the outer and inner facade is tapped along the whole perimeter.

The serial modulation ceiling represents an expressive element that allows the integration of the fragmented construction within the city skyline while they scale the building and effectively resolve technical aspects of both structure and services.

The building is formed by a simple but at the same time working out complex volume inside through a single continuous public promenade, executed with a spiral staircase from the lobby that connects to the 4 levels of the building.

The external austerity and simple composition of spaces, all white, internal movement contrasted with the expressiveness of the main auditorium and concert hall covered with triangular panels that evoke gold leaf, seats upholstered in black and all the sophistication of the new technologies.

The main elements used in the construction of the Szczecin Philharmonic are glass, aluminum, concrete and “light”, especially on a steel structure. In its materiality, the building is perceived as an element of light. The glass facade, lit from within, allowing different perceptions.
The exterior facade is solved with high translucent glass coated every 20cm with aluminum slats that help emphasize its verticality and allow the entry of light around the perimeter.

Illuminated by a LED system, the building becomes a glowing volume with minimal energy consumption. LED lighting dynamics contains over 25,000 artifacts Traxon Dot XL-3 RGB custom replacing the linear arrangement of fluorescent lamps originally planned. Flexible chains mounted between the walls of the building and its glass cover, light reflected off the empty space. Moreover, a system e: cue control manages the installation, lighting and video management program that allows dynamic and static scenes, usually as part of the celebrations on holidays, the Independence Day, the anniversary of the Constitution or Christmas scenes and special events or concerts.

The lighting of the facade begins at the end of the day when the sensors detect low foreign and hard light until midnight. This operation can also be performed through a glass touch terminal.

The building mainly adopts passive energy control systems. The main element is the double skin facade to channel a large part of the installation system to provide an overall sound insulation and natural ventilation to prevent overheating. The ceiling is formed by several, more reinforced on the concert hall than in other areas, to optimize the acoustic and thermal insulation layers. 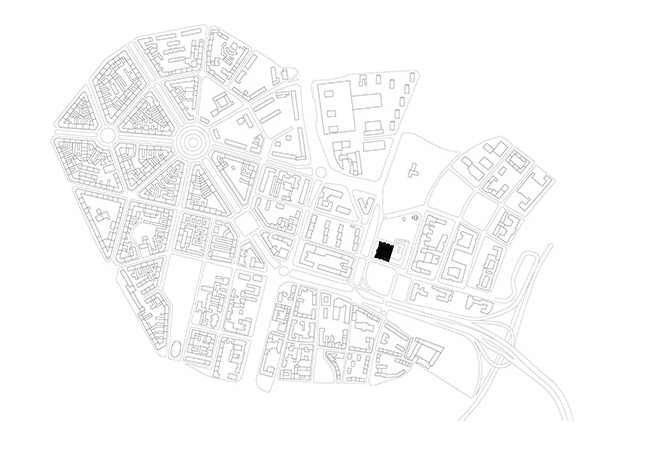 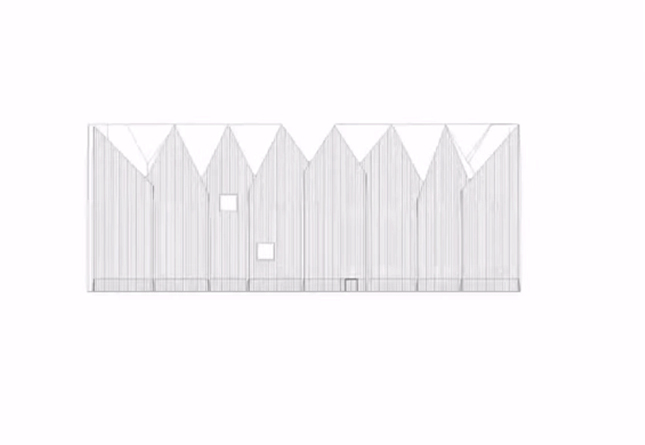 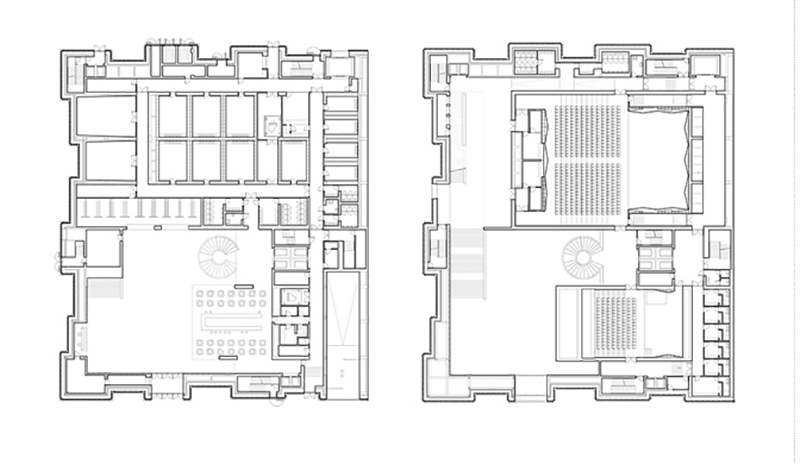 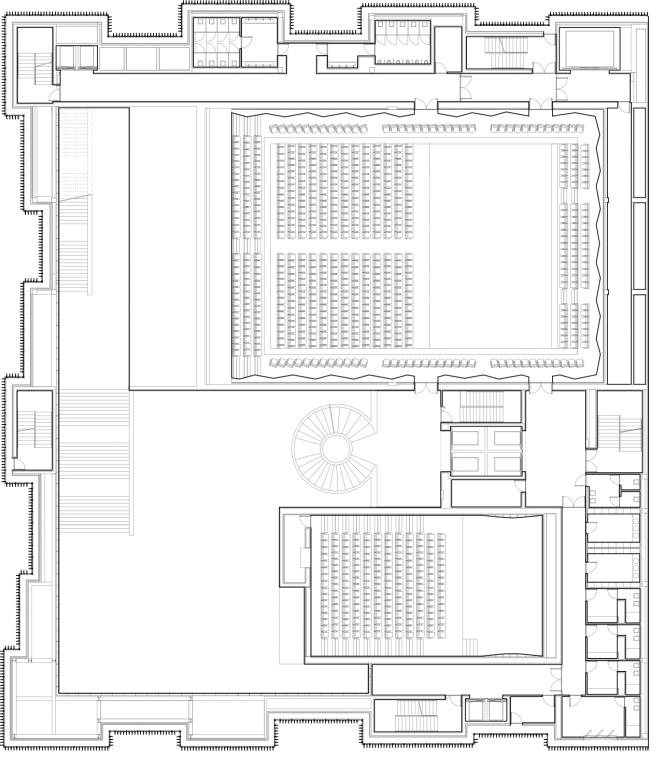 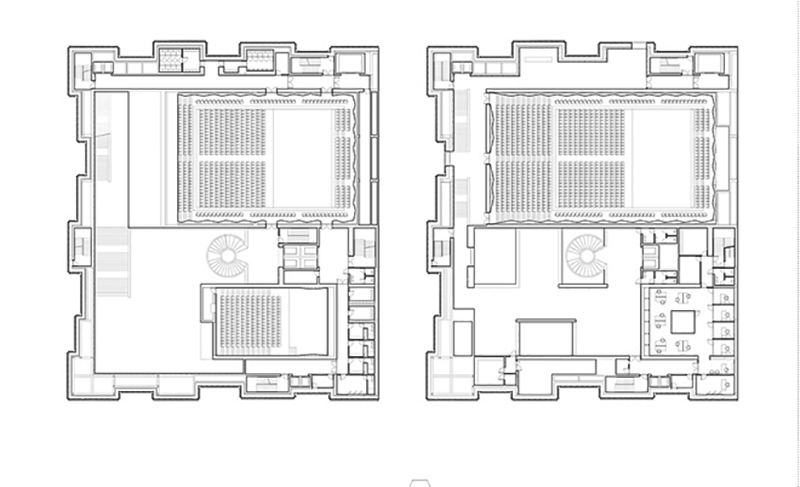 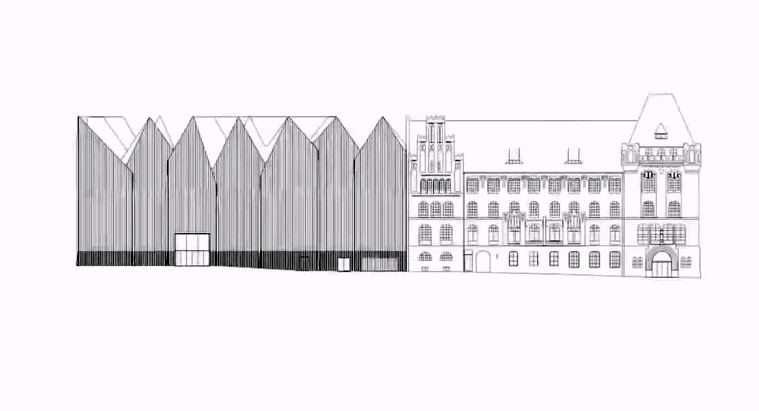 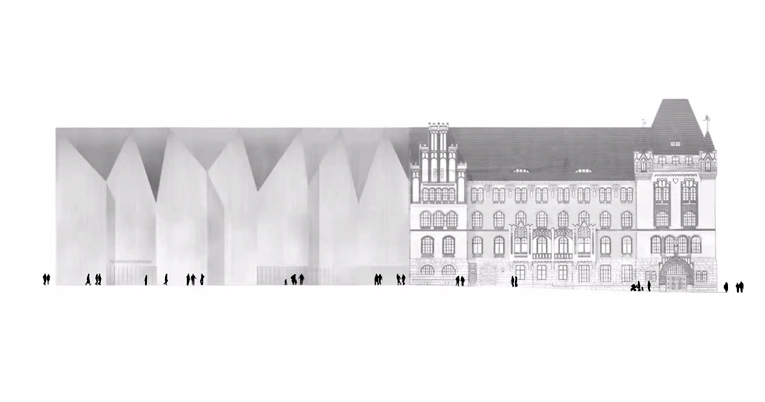 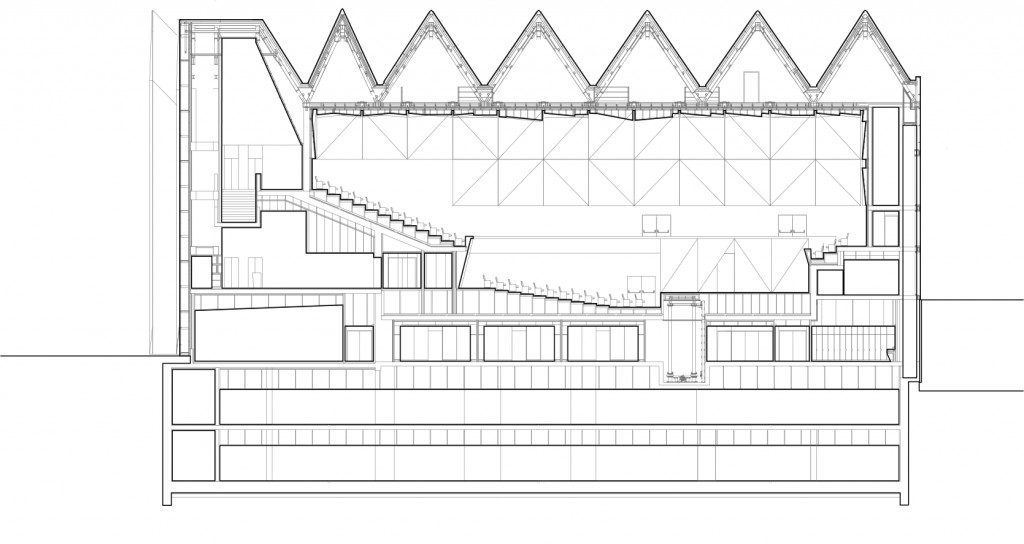 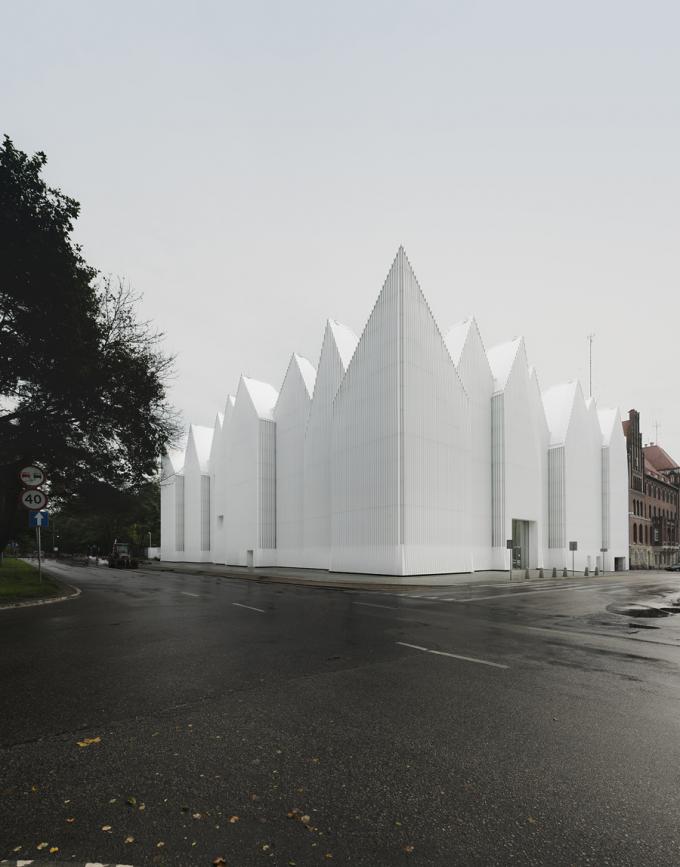 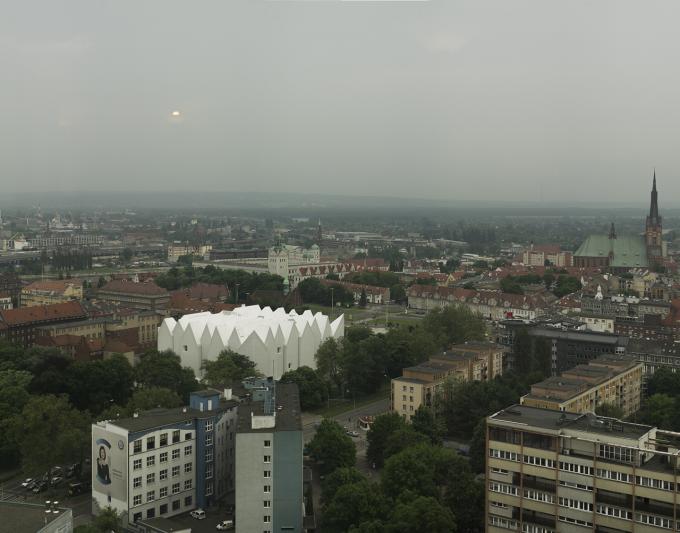 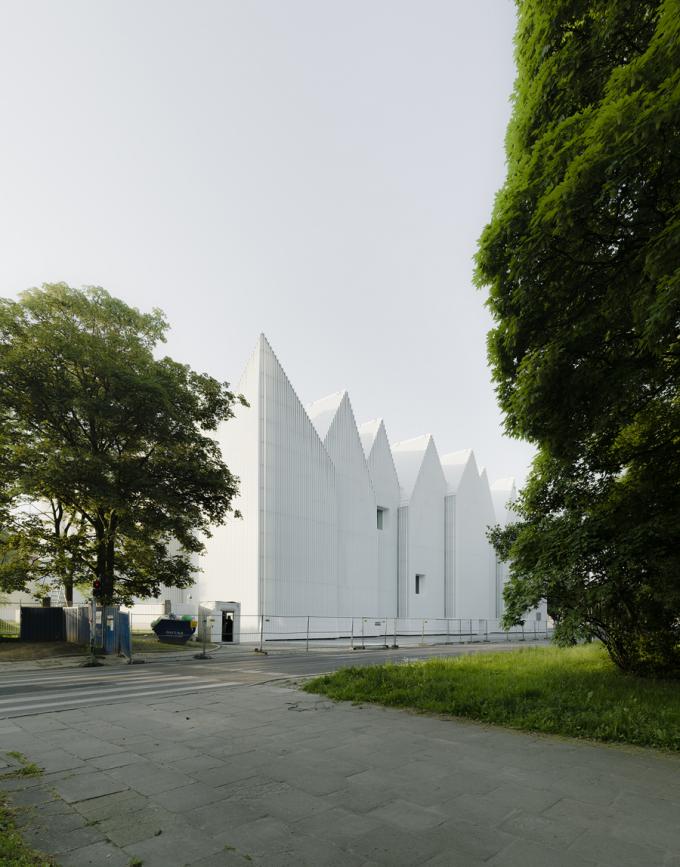 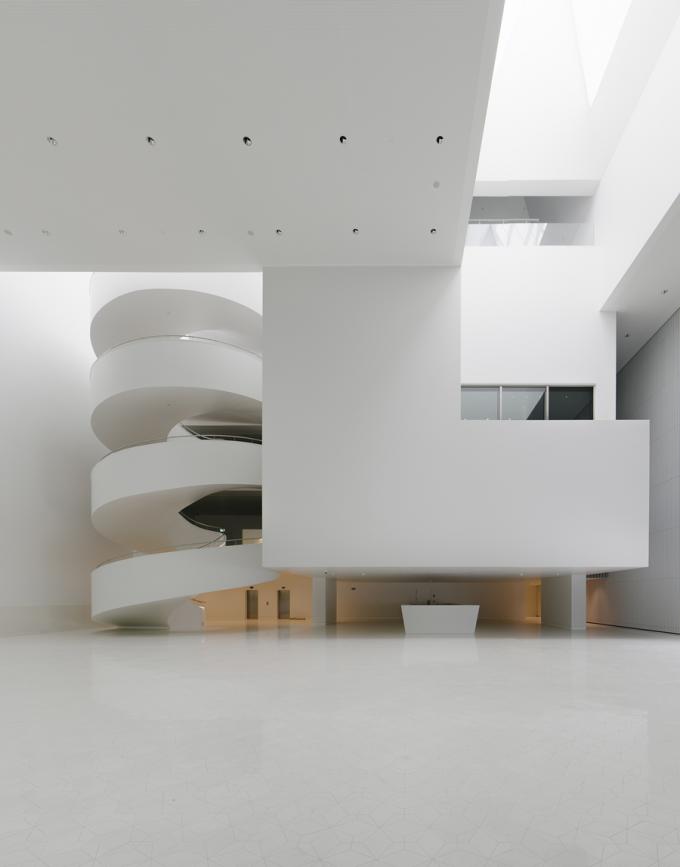 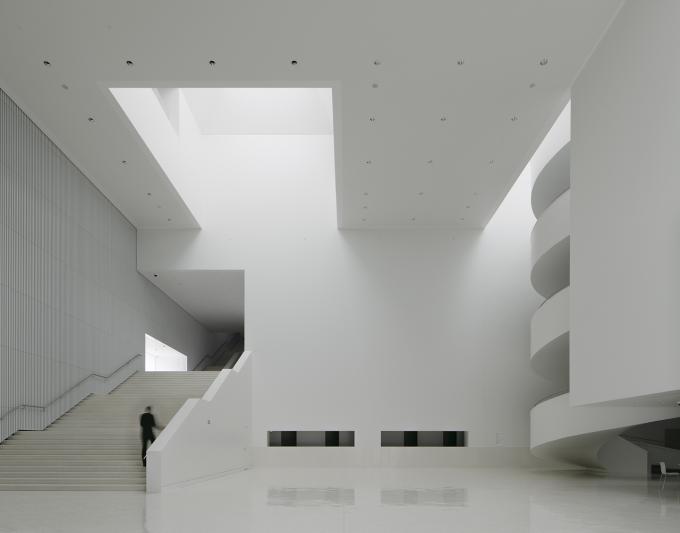 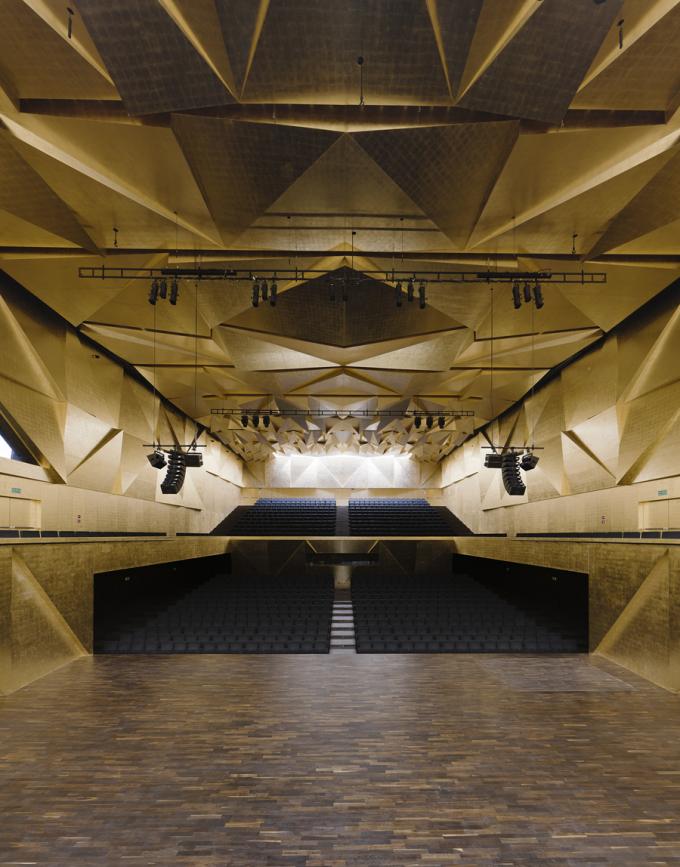 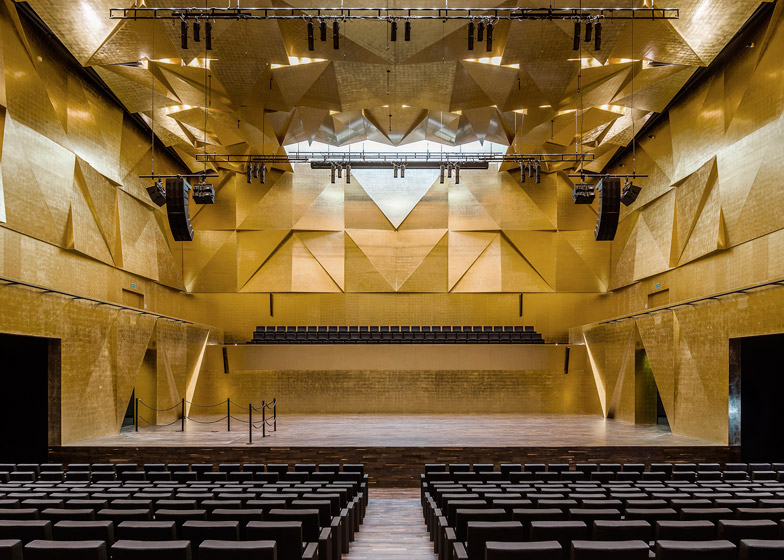 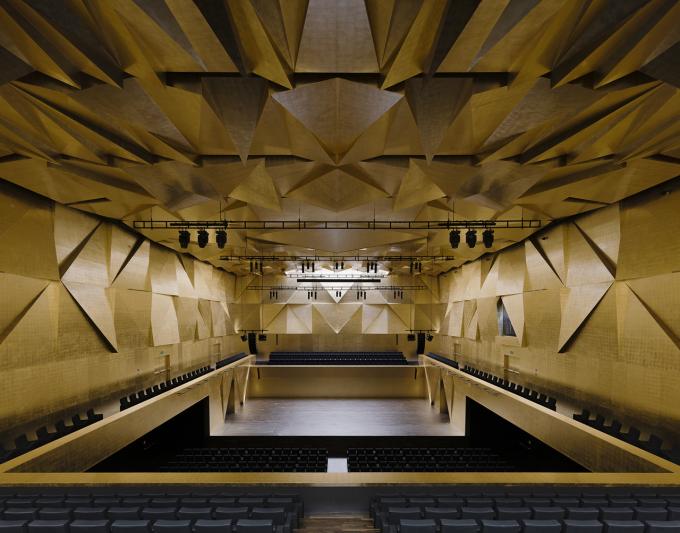 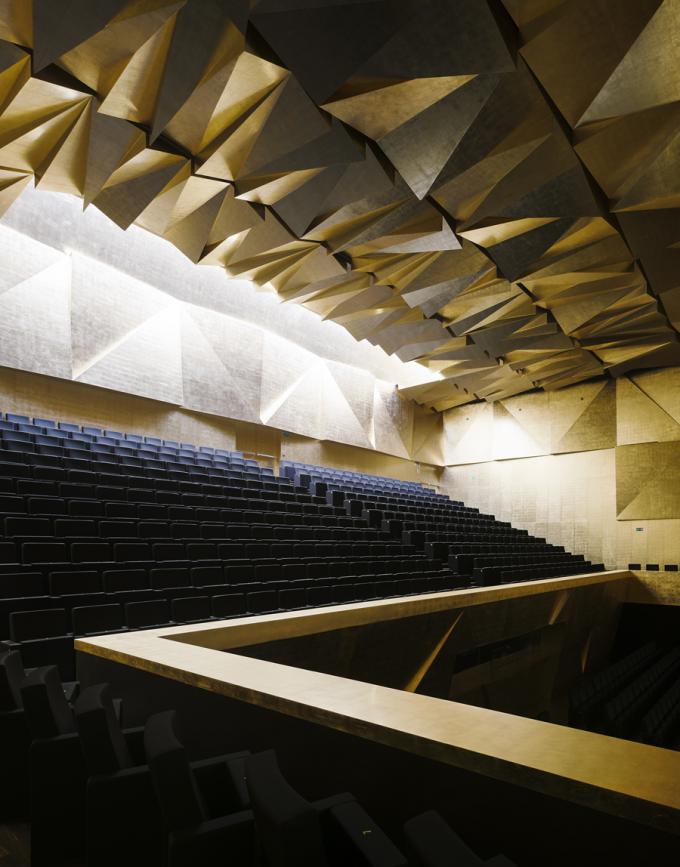 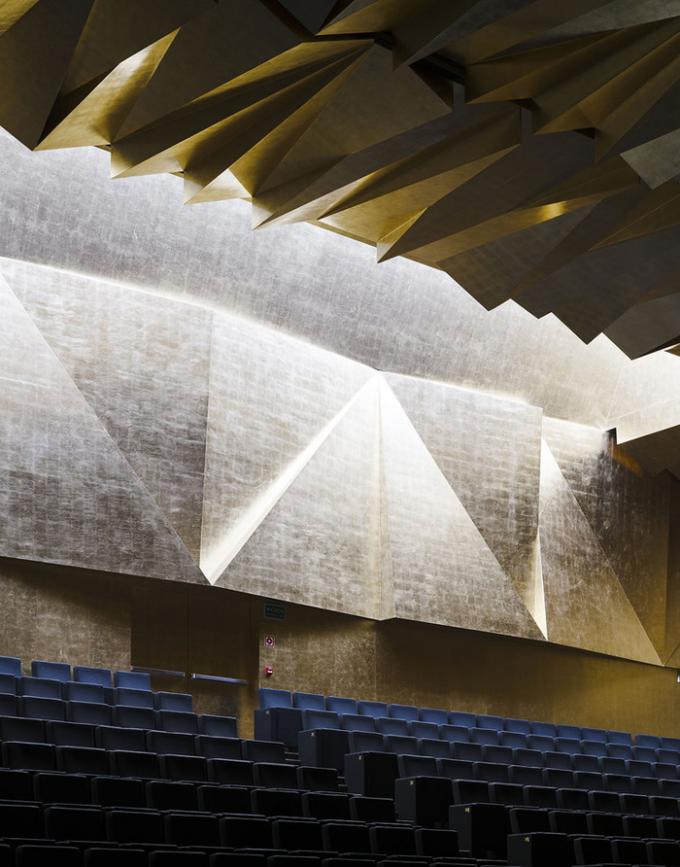 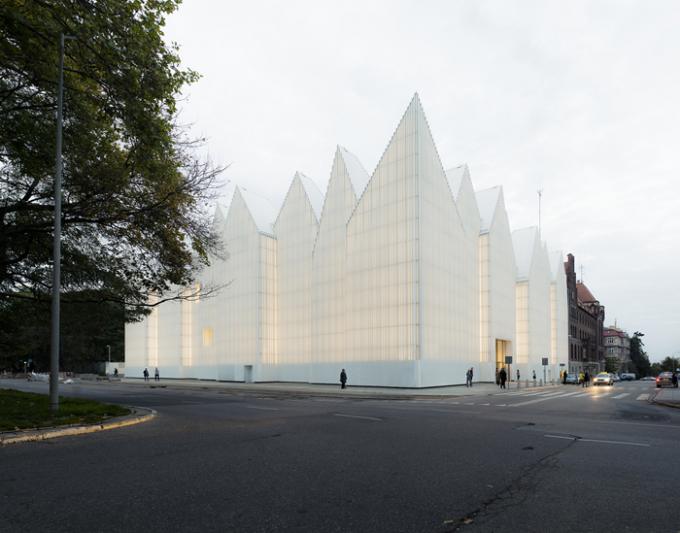 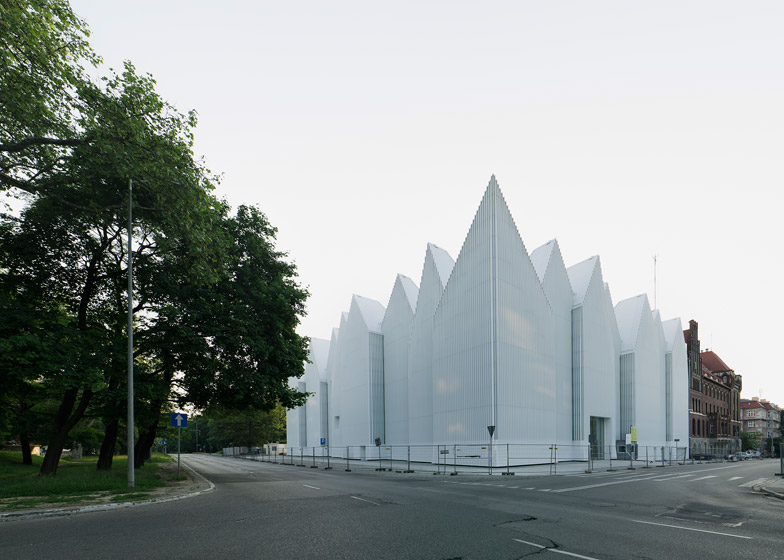 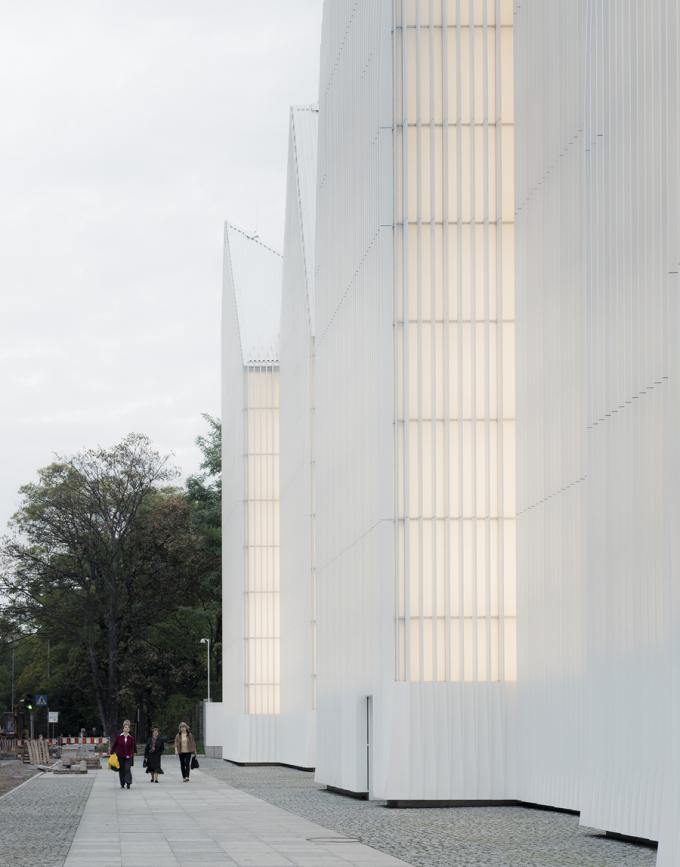 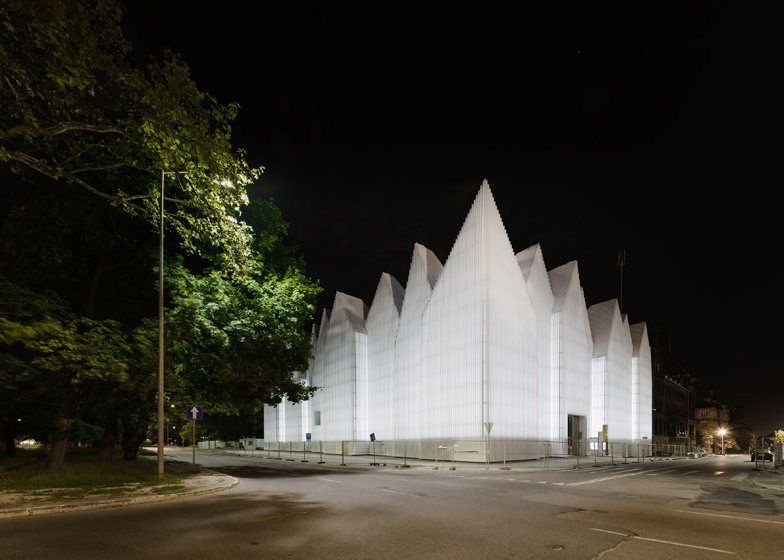 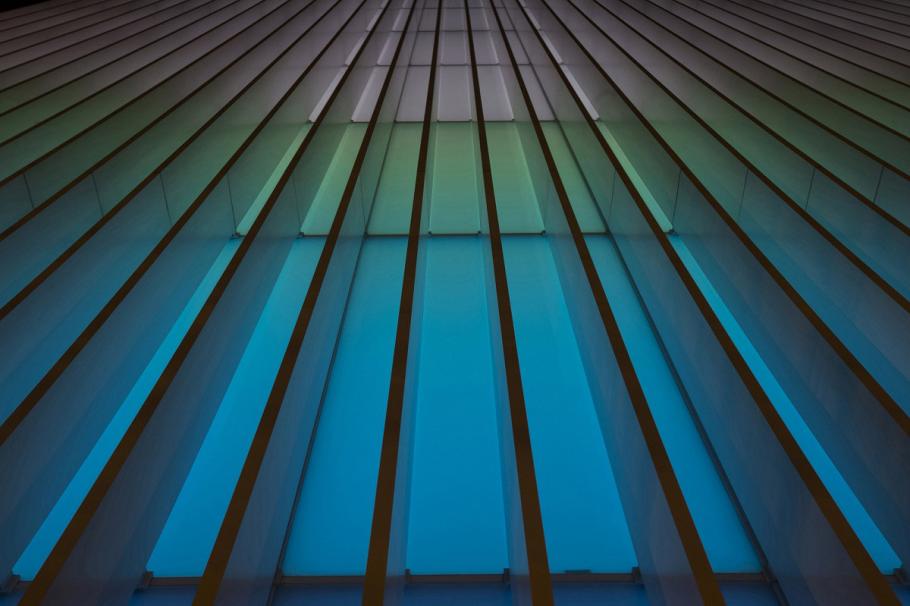 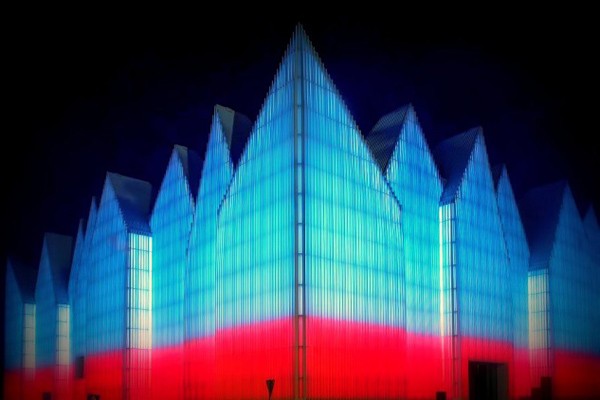 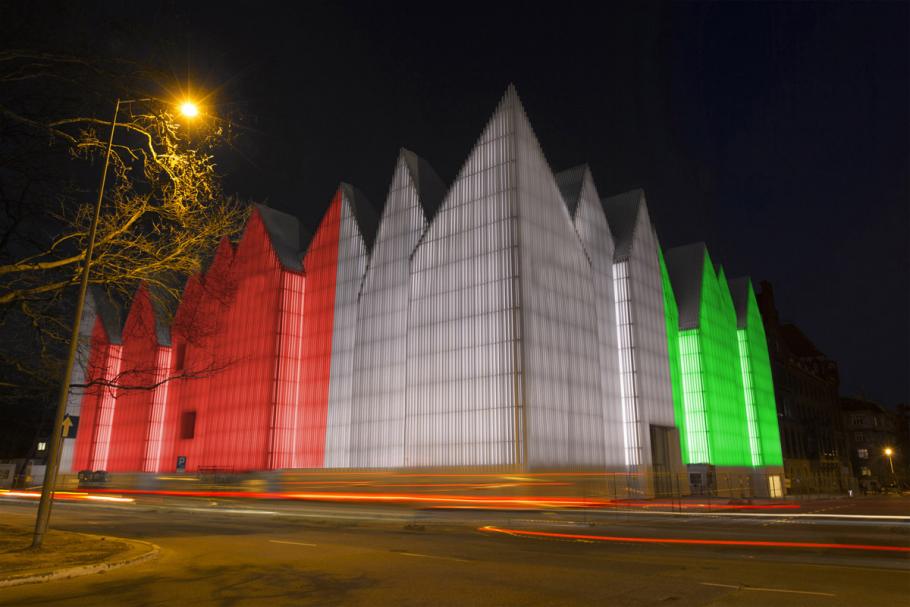 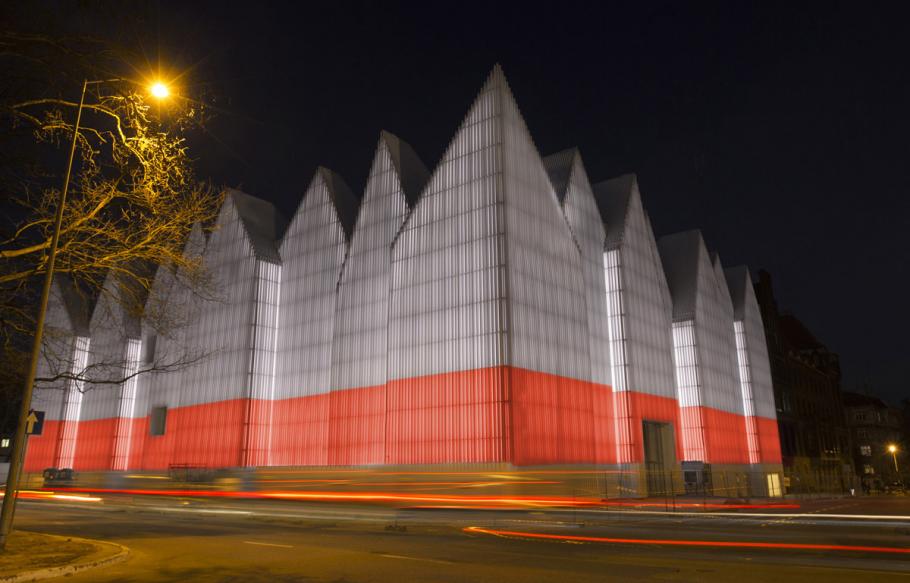 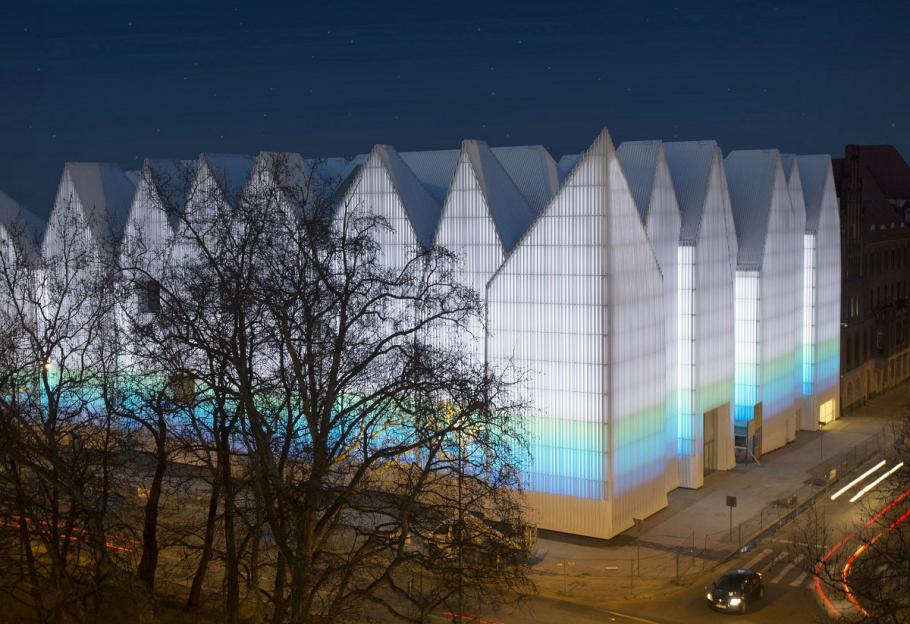