This is the extension of an existing building at the University of Svalbard. It was opened in April 2006.

With 8500 square feet added to the existing 550 (which have been rehabilitated), is the largest building in the archipelago of Svalbard.

The firm says that the first was the transport of materials. The port of Svalbard is frozen from January to May, and construction began in March. The conditions are like on the continent where you can search for materials and equipment when needed, all you have to plan, to the smallest detail, but the schedule has been set down.

The first cargo was moved in March under a layer of ice one meter thick and a boat called the Norwegian Coast Guard, which led him through the ice blocks to the port.

These challenges explain climate because the use of prefabricated elements had to be minimal.

It is located in Longyearbyen, capital of the main island of Spitsbergen archipelago of Svalbard, Norway.

The building is inspired by the stars, with five arms emerging from a central core, responding to a fully comprehensive analysis of the climate instead.

This geometry and his skin covered with copper reference to the landscape, adapting to the movement of wind and snow.

For the study of the architects Jarmund / Vigsnes, which won the project through restricted, there were several factors to be taken into consideration in the design of the work.

• First it was important to create a building that is integrated into the landscape, obviously for aesthetic reasons, but it was also necessary to measure as accurately as possible, through advanced technology, wind speed and movement of the masses of snow, to design a building that did not stop the snow, which does not impede their passage, and avoid their accumulation above, while extreme blizzards built around the building.

• Second was to protect the environment. Like all buildings in Svalbard, the new science park is built on stilts kneeling on the ice permanently lifted to prevent icing.

In addition to the University, will house the Museum of Svalbard, the Polar Science Center, administrative offices of the authorities of the island, a library and cultural center.

The complicated network of construction grants to each of the rooms as a differentiator.

In the areas of design and installation of roof panels refer
to “mine”, the traditional occupation of Svalbard. Pine panels are mounted in the vaults that seem so dug in the rock.

The inclination of the walls accentuates the effect of “cave”. In contrast to reflect light and natural architects have chosen to make the doors and their frames vivid colors: green, orange and red.

To highlight the different dynamics in the estancias, the architects have played with the positioning of windows and roofs of different heights.

The structure was used steel and wood.

In the main building was chosen for the use of wood to facilitate the adaptation and the work of structural loads on the ground and avoid thermal bridges. Laminated wood beams arrived at the 26 meters long.

The variety of forms that exist in the construction of walls and the roof is unique to the work. Sometimes the two are joined in a vault, and a detail to keep in mind that within the building there is no angle or straight wall and the roof is composed of 34 different areas at different levels.

Wood is the predominant material in all this work.

The roof and walls are lined with pine and wood is oak. 40,000 square meters were used in the first and second of 4000.

The wood of the walls are covered with transparent lakes and soil with oil.

According to architects, Wood was chosen for several reasons, including creating an atmosphere inside the building, more than anything that can compare with a refuge from the cold and darkness, as from late October until mid February, the sun comes on the Svalbard archipelago and its people seek, inside the buildings, a contrast to 15 degrees below zero outside.

Only prefabricated materials that were used were the horizontal divisions between the plants.

Taking into account the extreme contrasts between the indoor and outdoor temperatures, and the use of wood in the main structure, external insulation are composed of two layers of membrane welded copper, which stops breathing and moisture to escape.

The outer fabric ribbons are fixed by special screws and bolts fitted with neoprene against the membrane.

The interior has been used without an insulating boards open. This is a membrane with an asphalt car fijante aluminum core drilling is in effect nut.

The play is a new benchmark in terms of buildings this size in such latitudes 78 degrees North, a fragile natural environment whose preservation is of general interest.

Considering the size of the building, which is several times that of existing ones in Svalbard, environmental issues were more important and the building process and materials were chosen to adapt to very strict criteria. 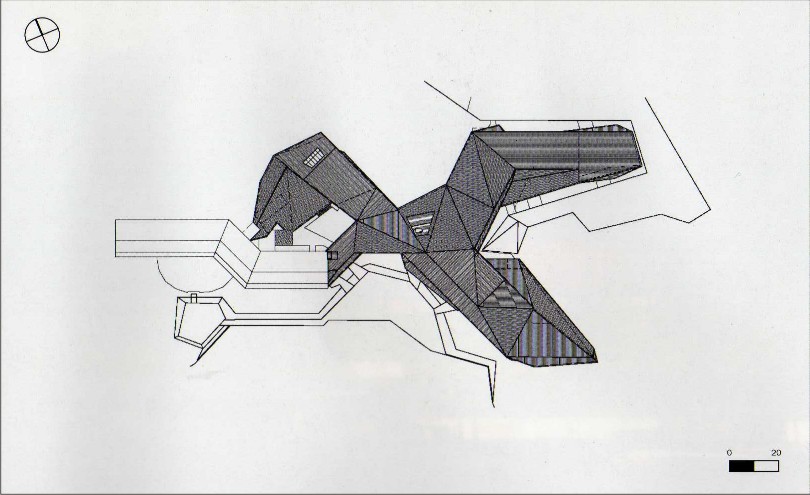 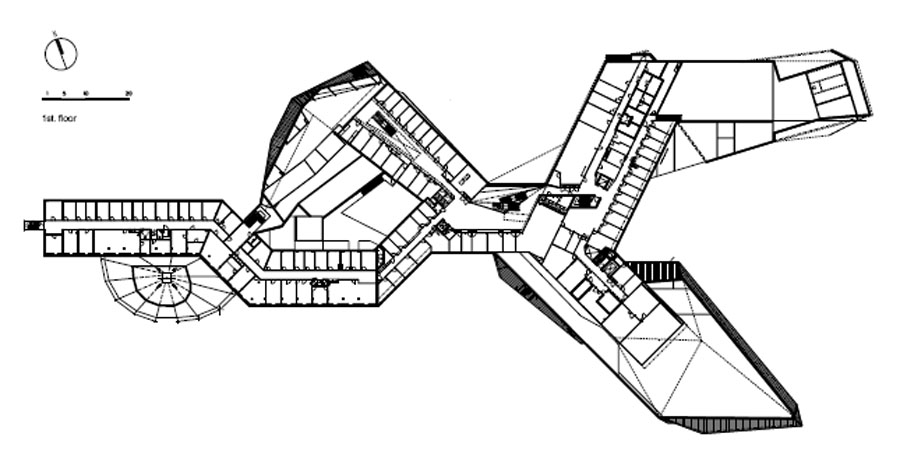 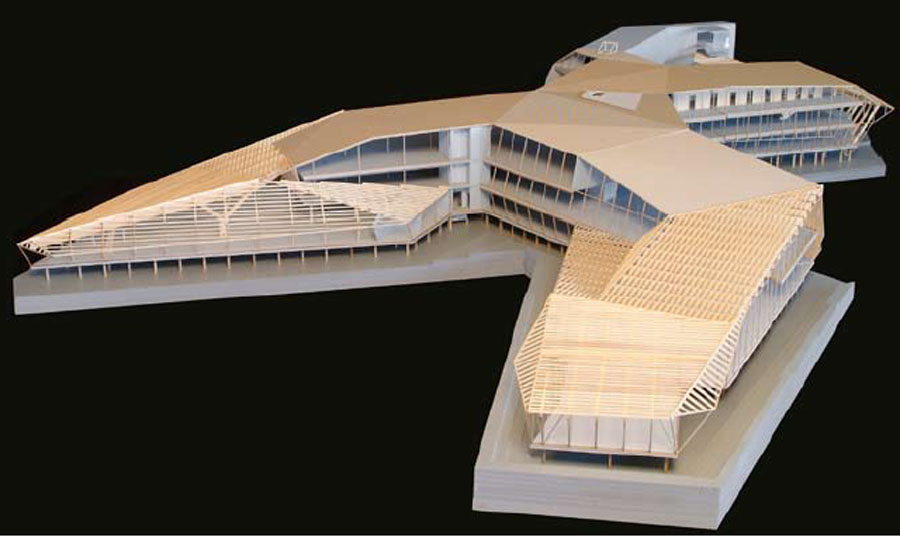 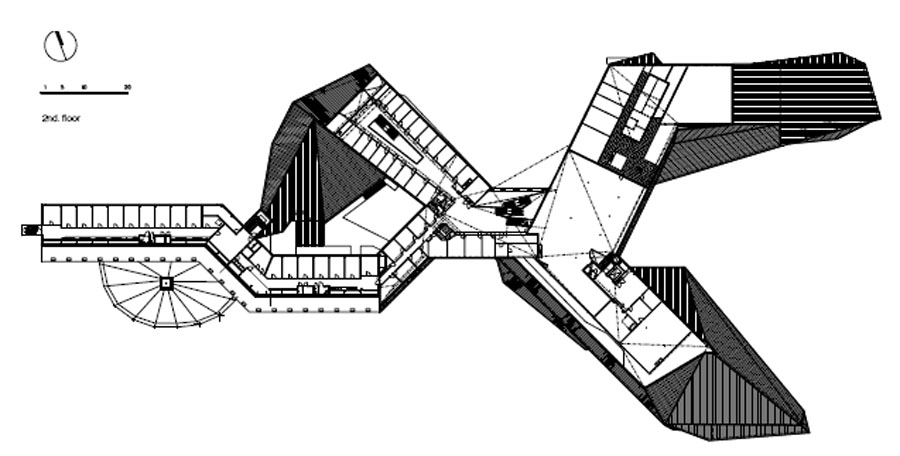 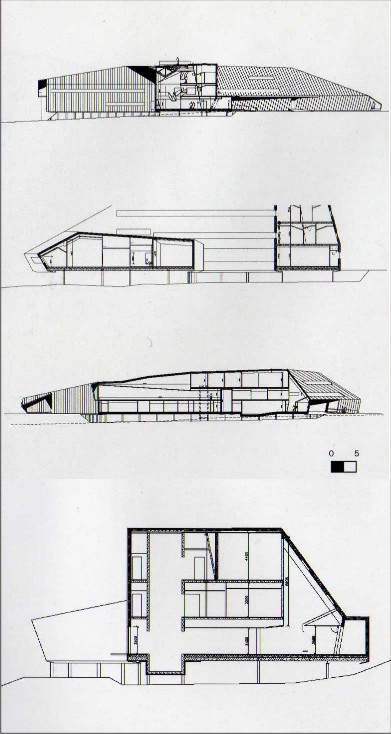 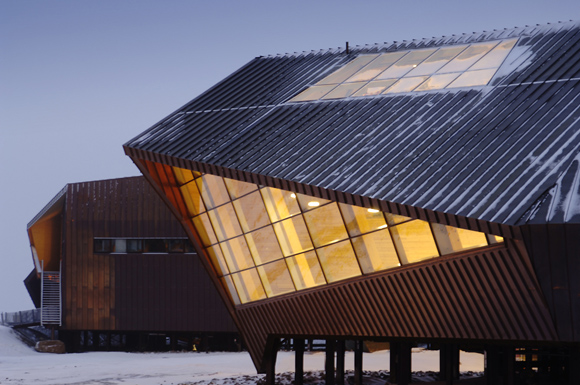 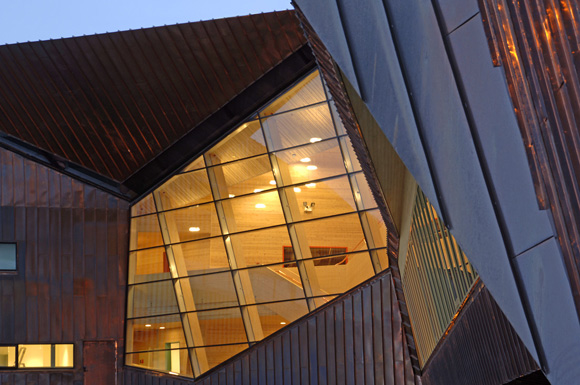 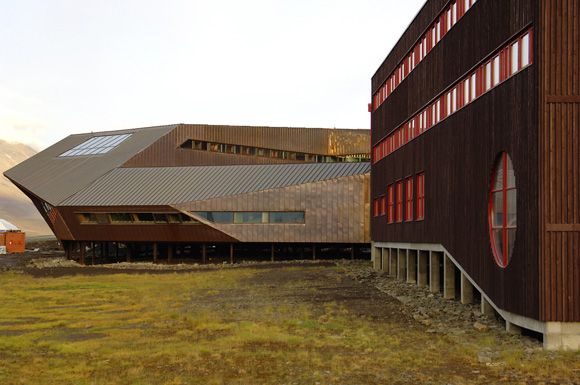 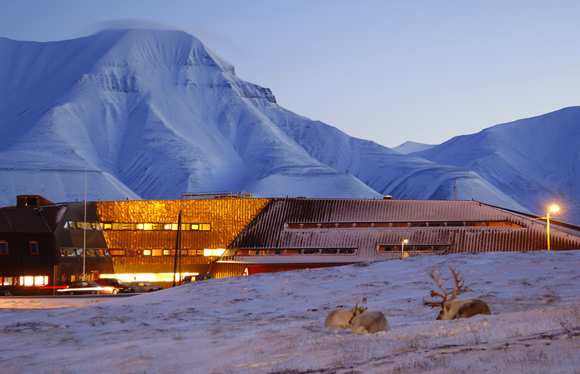 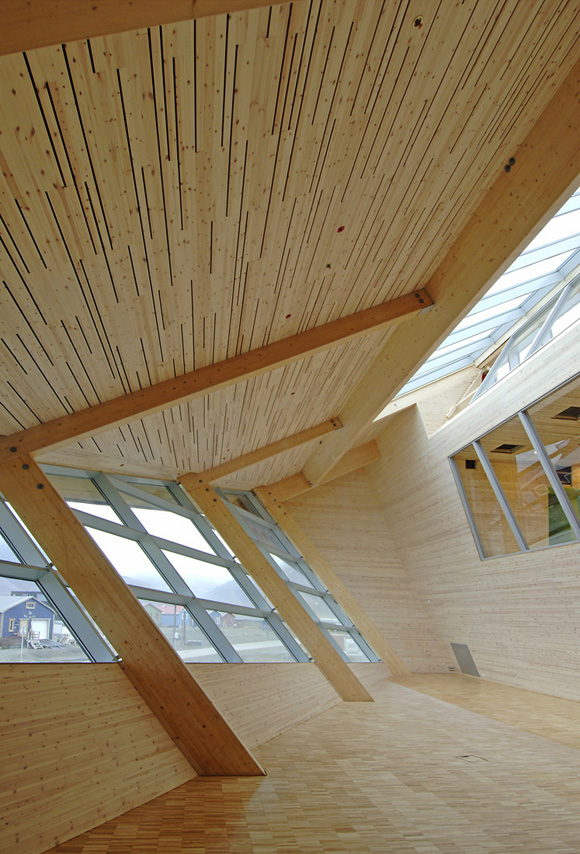 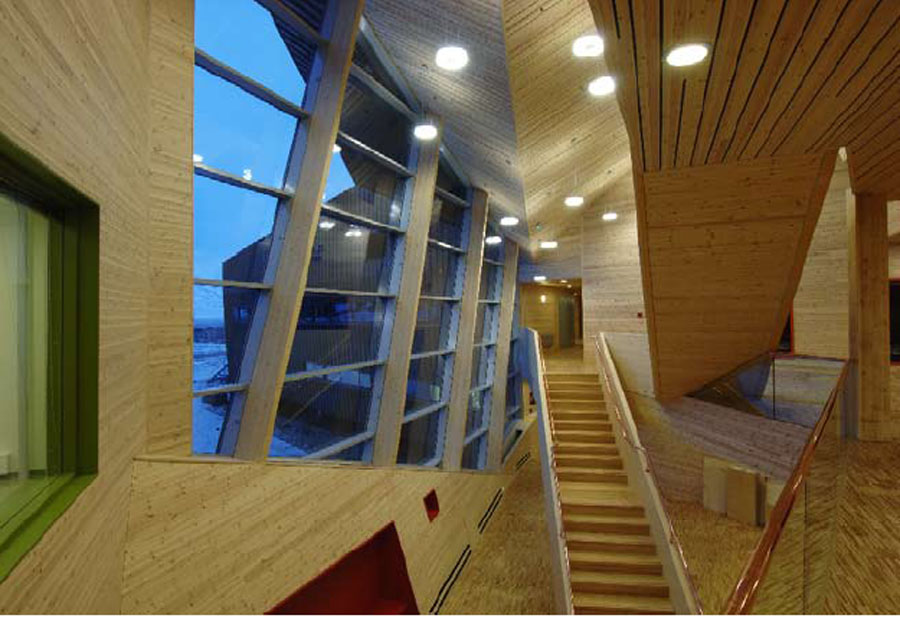 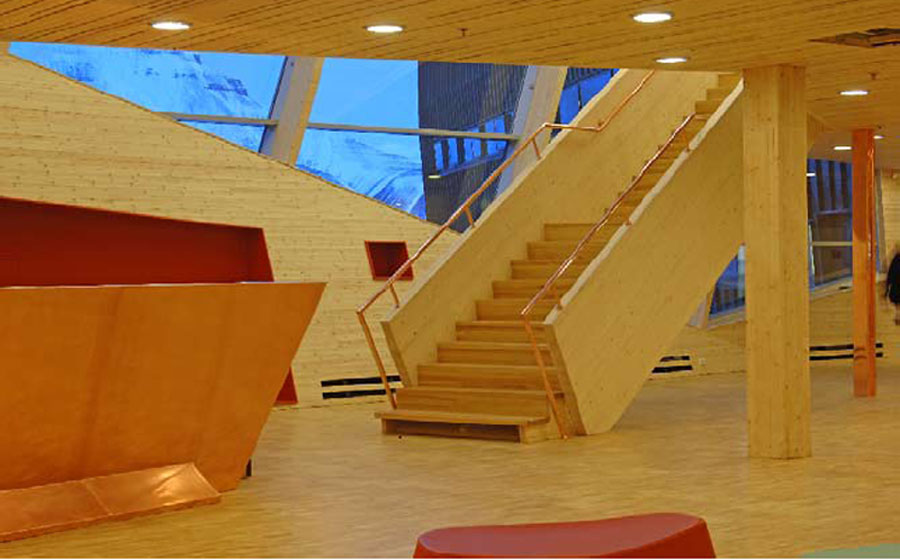 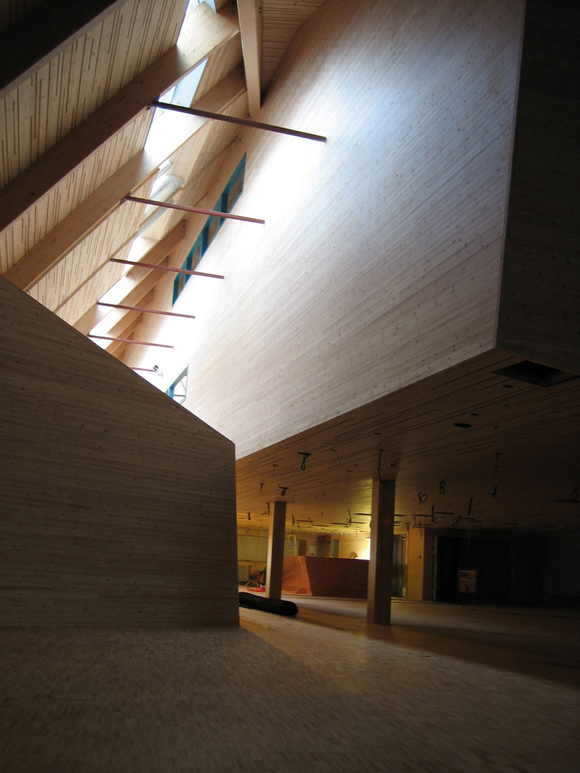 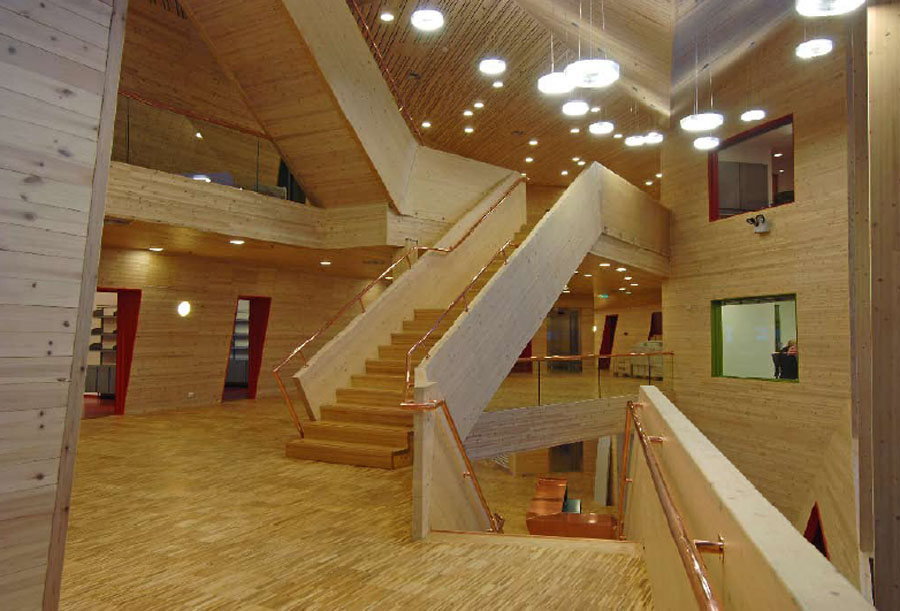 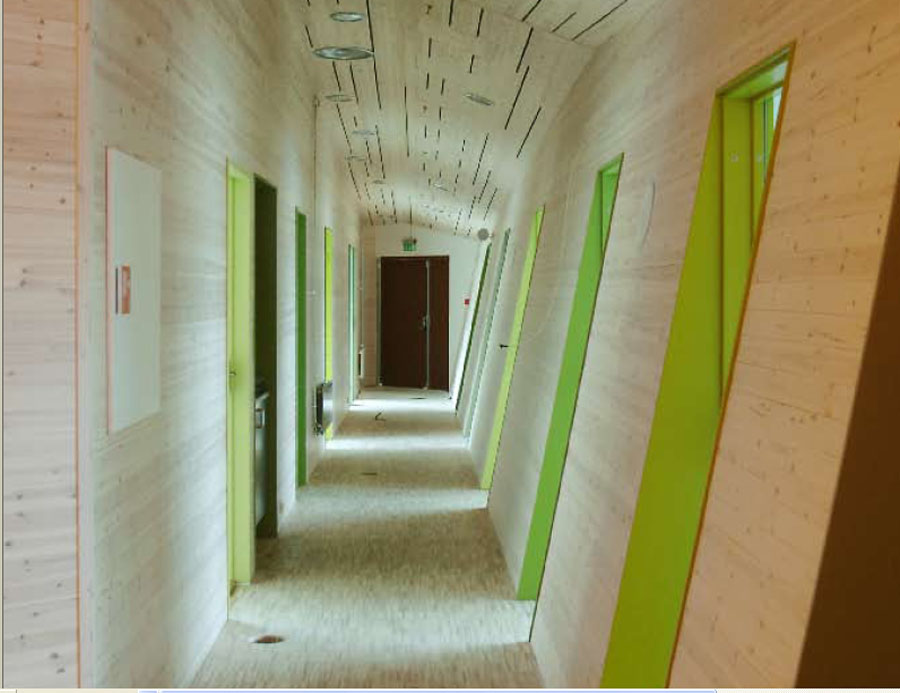 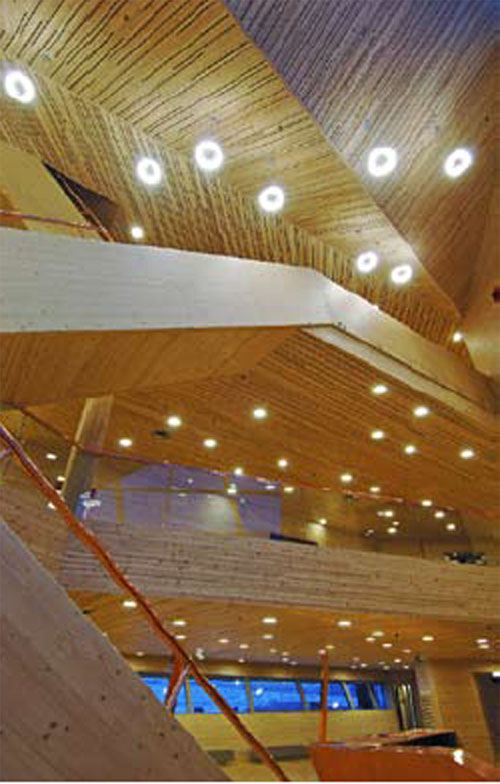 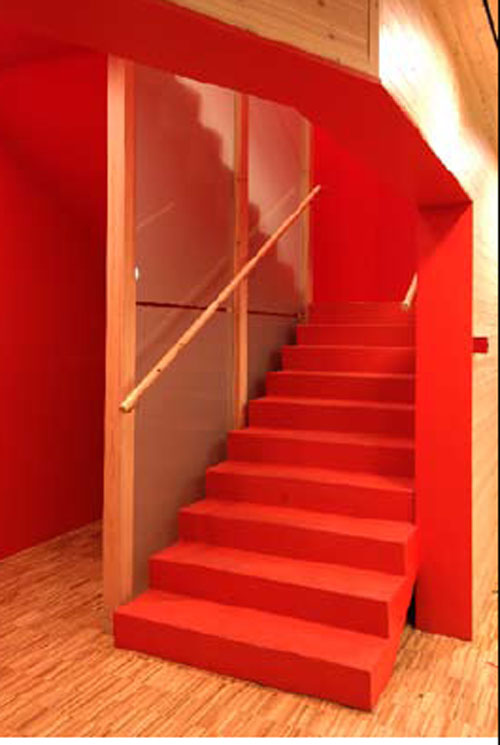 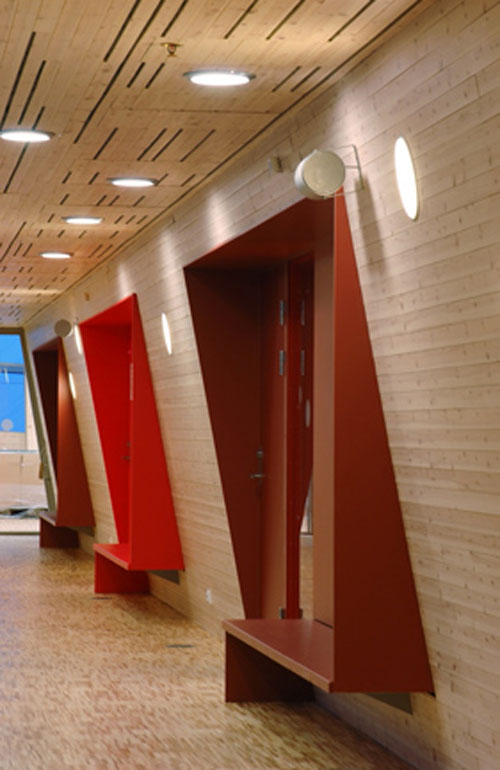 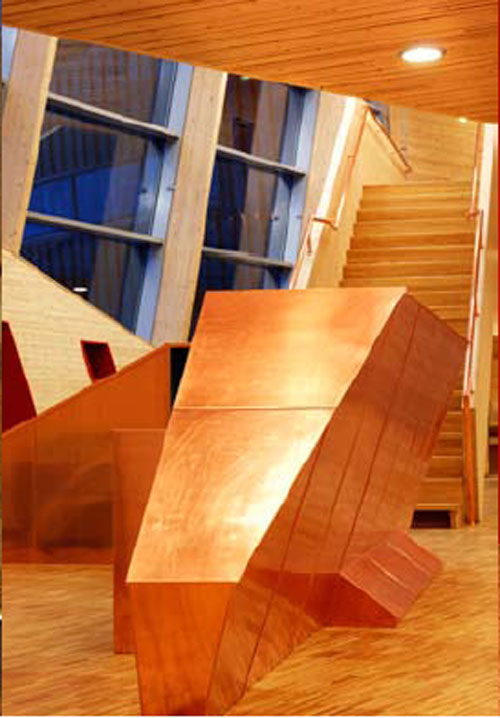