The origin of the building that houses the Protestant Church of Santa Maria, Marienkirche in german, is unclear, although presumably the mid-thirteenth century, and at that time began to be mentioned in some German chronicles, coinciding construction with extension of the medieval city of Berlin and became the parish of the new part of the city at that time.

In the late nineteenth century, post-war period, restoration work was performed. Together with the Church of St. Nicholas, the ruins of the Franciscan convent and chapel of the Hospital of the Holy Spirit, is one of the most significant buildings in the history of the city and the only one that continue religious services. Originally worked as a Roman Catholic Church until the Protestant Reformation that became Lutheran Church.

The church is located at Karl-Liebknecht-Straße 8, formerly Kaiser-Wilhelm-Straße, in the center of Berlin, Germany, with the TV tower, Fernsehturm, as background and close to Alexanderplatz.

Prior to the Second World War the Church of Santa Maria was located in a densely populated part of the district of Mitte. During the war the building was severely damaged by Allied bombs, as well as other buildings in the area, must be cleared of all buildings in ruins caused by the bombing, leaving the church surrounded by a free and clear surface, becoming the only reminder of the historic city center. After the war the church was in East Berlin sector and in 1950 it was restored by the East German authorities.

The original masonry building, with a central nave and two on sides in Gothic style, was transformed during the Baroque by Andreas Schlüter by adding a large pulpit. 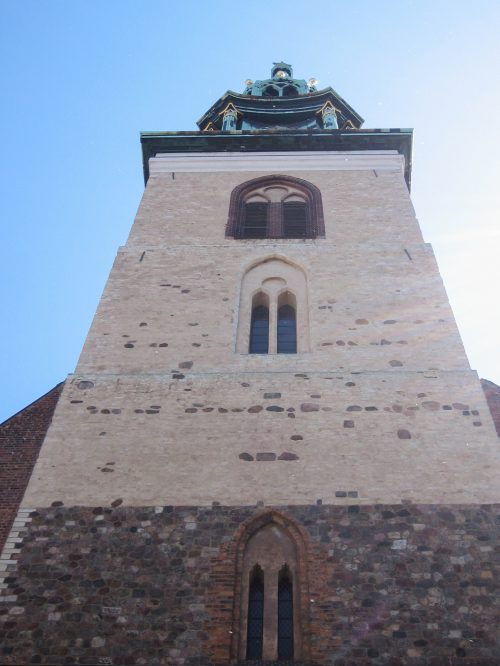 On its main facade facing south, restored between 1893 to 1894 by Hermann Blankenstein returning to the temple first style, the classic gothic tower, designed by Carl G.Langhans rises. The original wooden campanairo was destroyed in the fire, so Langhans in 1790, Prussian architect best known for the Brandenburg Gate, replaced by a copper version, designed in Gothic style with reference to classical and baroque architecture.
Blankenstein also built the pentagonal restored the organ and the floor. On the same front, the front door made ​​of hammered copper by Achim Kühn Berlin blacksmith symbolizes a cross and is newer than it looks as it was made ​​in 1970.

The ground level of the church is the same of medieval times, the vast difference in height with the outside ground, 1.50m, is the result not only of the fact that the entries of medieval churches were often deeper but also demolition and subsequent restructuring of the entire environment.

In the foyer of the church is located three slabs with reliefs of the late sixteenth and once past the organ at the base of the tower, the famous fresco of 22m long and 2m high “Dance of the death “(Totentanz) of 1485, in which the ravages of the plague in Berlin between the years 1480 to 1484 are reported. This is the most important preserved medieval work in the German capital. 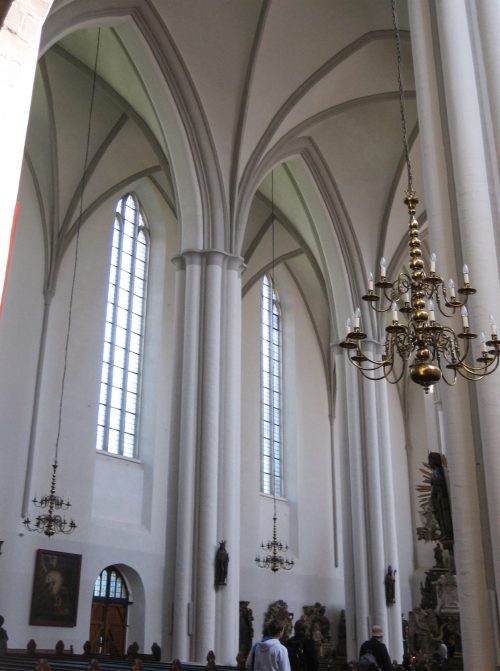 The plant of Santa Maria is rectangular and has a nave vaulted ceilings, rib vaults are supported by slender columns, two side aisles and a central pulpit. After the war, the pulpit was ahead from the second column to the fifth column and several banks were realigned to face.
The nave of 6 bays has a short chancel terminating in an apse. The aisles are the same height as the center. Its walls painted white and gray are adorned with numerous paintings and carved reliefs, some of which come from nearby churches destroyed during the war.

Both inside and outside the Church of Santa Maria has remarkable works of art.
On the outside, on the north side, on a granite pedestal, a bronze Martin Luther statue of 3.5m height, of the sculptor Otto and Robert Toberentz MP (1893).

The tower, the oldest part of the church (1270) is made of limestone and granite, although most of the present building is the result of numerous reconstructions, including 1380 after a fire or by East Germany after the war, in red brick which gives it its characteristic color. Use of this material was copied from the nearby City of Berlin, the Rotes Rathaus.

The ability of the former blacksmiths masters can be seen in rare forms of the Renaissance that have been forged to keep, as the bars of the interior and exterior of the building. Both for the dome of the tower to the front door copper was used.

The interior of the church is painted in shades of gray and white, with gold in the area of the organ and dark granite columns with capital leaves at the entrance.

The Dance of Death

The particularity of this ancient medieval fresco living in the geometric arrangement of the scenes, born in the western corner pillar of the entrance, occupying the western wall and most of the north wall, almost to the nave of the Church.
The spiritual and temporal representatives are separated by a scene of the crucifixion, which is the center of the diagram. Lines of text accompanying the drawing represent the oldest sealed in Berlin. In his verses representatives complain of their suffering and ask for an adjournment for execution. The dance itself is a Franciscan preaching, so it is assumed that the artist should be hired from the community of that order by the bourgeoisie of Berlin to cool.

“Dance of Death” was probably whitewashed during the Reformation and rediscovered in 1891 by the court architect Friedrich Stiller. The lime, together with the moisture in the masonry deterioration have motivated, so it is protected by a glass wall.

The Altar (1762) Baroque style following the earlier design was by architect Andreas Stüler. The large triptych was painted by Bernhard Rode. 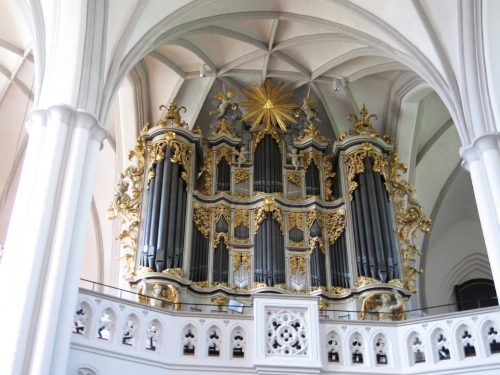 Pulpit Alabaster (1702 – 1703) Baroque by Andreas Schlüter. The magnificent baroque pulpit dates from 1703. Their wooden structure is covered with alabaster, carved reliefs and lush statues of angels and cherubs

The Baptismal font (1437) Gothic style, made ​​of cast bronze (Bronzefünte) is in front of the main altar. Your bowl carved of Christ, Mary and the twelve Apostles reliefs rests on four dragons.

One of the most striking of which adorn the monuments inside the church is the marble tomb of Field Marshal Otto Christoph von Sparr (1663) by Arthur I. Quellinus Antwerp.

Nearby is the impressive monument to Ehrenreich von röbel, created in the seventeenth century with the elegant sandstone or marble sculpture created around 1800 by Friedrich Minister Roloff and his wife Dorothea Eleonora. The design was inspired by the monuments of classical Roman sculpture.

The organ in the west wall is a masterpiece built in 1721-1722 by Joachim Wagner. The display was created in 1723 by Gottlieb Glume. The organ was restored and partially rebuilt in 2002 by Daniel Kern.