Andalusia Conrado II ascend to the throne in the year 1024 began construction of the cathedral as the imperial church.
The successor, Henry III and Henry IV, enlarged and completed.

First, the building was built between two longitudinal groups of towers, and in 1100 was entirely vaulted.

This building was destroyed during the assault on the cathedral by the army of Louis XIV, but was rebuilt in the nineteenth century.

Located in the Upper Rhine between Brasilea and Mainz, Speyer Cathedral is considered the largest Romanesque church in the West for its grandeur, due to the total space.

Spira is a leading industrial center and railway junction and its activity is based on the manufacture of machinery, chemicals, food and textiles.

Externally, the building was a block as a transept, 30 m wide, in the years 1040 nave reaches 30 m in height. As the wall of a fortress closed the main street of the city.

This building is from the early Roman period of time until they mature, through various architectural advances.
Are clear echoes of pre-Romanesque style, with flat roof in its origins.

Romanesque architecture, autumn is heir to the Carolingian and she receives some of its most important and distinguishing features.

Emerging forms of art in the ancient capitals and the cornice of the roof.

In the apse of the transept is a architecture edículos a renaissance.

The cathedral was built Conrado smaller; Keystone plant with the presbytery, aisles and upper body West.

The cathedral was consecrated in the year 1061 and years later, Henry IV continued construction are built apses and transepts, and is covered with vault the nave.

The plant consists of a body formed by a western portico on the ground floor and galleries on the upper level.
The nave of 15m wide, has six sections corresponding to the 12 sections of the aisles.

In the reconstruction of the head, reinforcing the walls of the crypt, two bell towers rising from the towers instead of the stairs and an apse was added to the chorus, which finished with a triangular pediment that accentuates a series of arches.

The outer wall of the apse adopted the joint high-blind arches of the nave, and crown the building with a gallery of arches dwarf aligned.

A gallery open to the outside around the building starting at the same level inside the dome.

The inner wall is broken down into two layers that make a space in the middle: The chapels, which flank the ground floor main space, like a crown of niches in the apse amolados around the presbytery.

Is divided into three modules square, whose arms are located at a displaced chapels sides of the east wall of the transept by the presence of a tower block.

Greatly increases the articulation of the wall, both outside and within.

The cruise of the transept, a square, highlighted by arches on pilasters, and eventually rises a tower.

Ribbed vaults are introduced, each one in which encompasses two huge arches of the first division of the building.

On the walls introduces a robust pace of salient elements that reflect light and space in the sequence of “corridors” established by the vaults. The corridors of each unit-vault of the first phase of construction of the aisle and vaulted corridor double in size the nave are the first “system required” during the twelfth century standards for buildings will be domed basilica.

Held in the first phase of construction of the cathedral, we have an orderly space of abstract language, formed by arches and pillars separating the crossing of the arms of the transept of the arm to the east and west crypt.

The space is determined by a plant squares, each containing a 3×3 entrepaños (which connects to the crypt and the apse).

The columns are built with cylindrical blocks are robust and powerful, and contain cubic bases and capitals, forming a solid note.

The outside walls are articulated in correspondence with arches and pillars in relief in two layers and half-blind arches columns – which makes the endless view.

Are covered with domes on edge by bays of 8 square meters in vain.

Year 1050. The ground floor of the atrium is changed, and the large central area of the upper deck, flanked by side in multi-storey spaces.
From the outside the whole appears as a solid western massif, as a transept, which by the year 1100 had three towers, which today are not retained.

The original building was made with wooden roofs, and its reconstruction is replaced by stone vaults of edges; foreclosing highest space; raising.
This is how the side walls are attached to the roof by the same material, replacing the bucket abstracto sealed horizontal, for a space defined by semicircular arches.

The area of the central nave, dominated by half-point arc, made clear the principle of “addition”. The apse is linked to in-depth articulation of the walls of the nave, thus generating the transfer from the columns and arches attached blinded straight from the rounded walls, clearly both inside and outside the building there is a conception of the wall facing not only as it closes, it is structured as a “plastic mass” to form internally and externally.

In the transepts, pillars instead of walls, is the principle that applies where powerful pillars protrude inwards and outwards at the corners and the center.

In the nave, the articulation of the walls in relief, where the wall and double wall stuffed with pilasters, as highlighted in the first part of the building.

The technical structure of the wall is visible in form, which has an inner and outer crust, and a core of concrete or mortar. This nucleus is removed to roofs, remaining spaces in the interior which are in turn structured in the form of two chapels and two bays apsidioles that open toward the center of the church by carrying bows geminados on a column Mainel.

Greatly increases the architectural ornament, mainly in the decorative moldings on the windows of the transept. 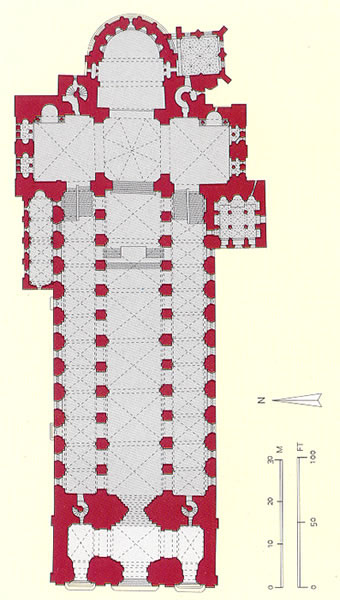 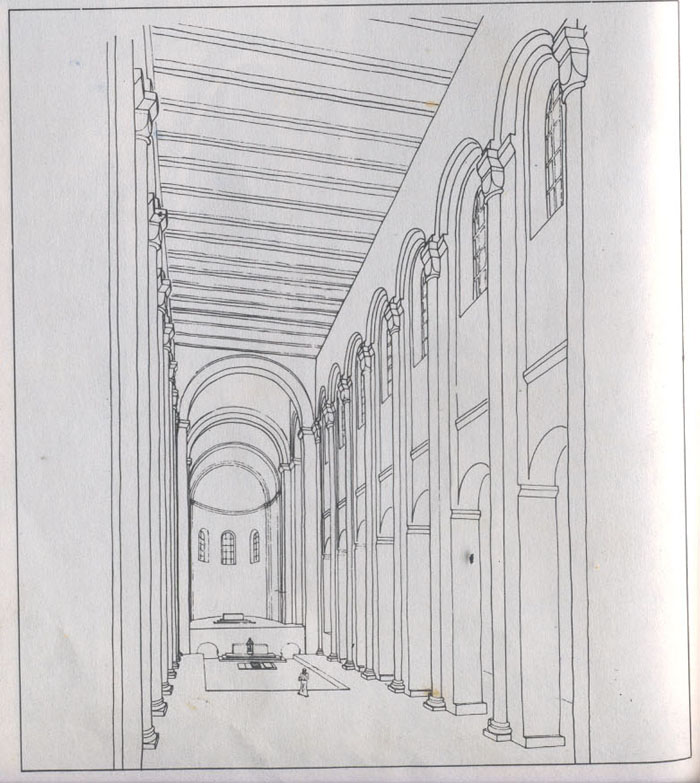 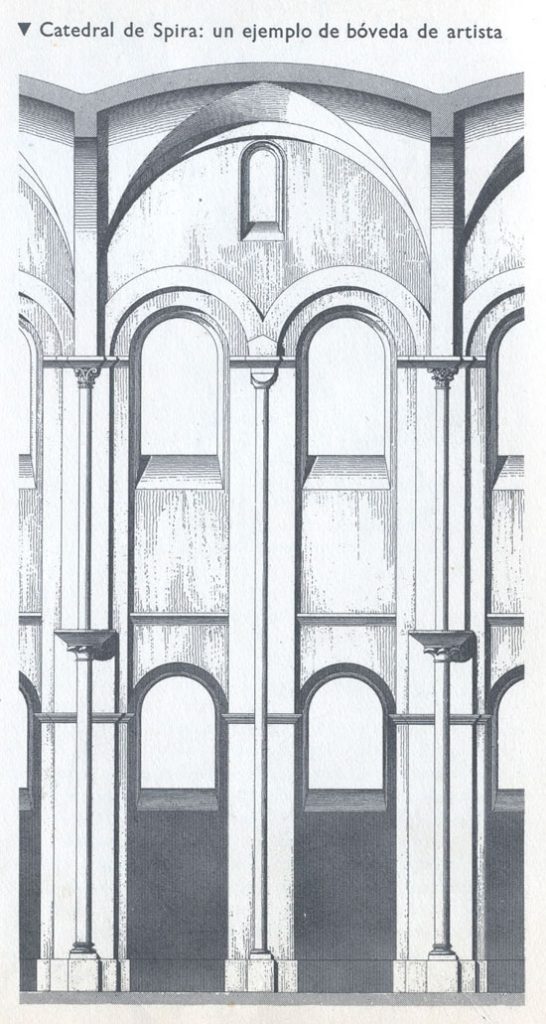 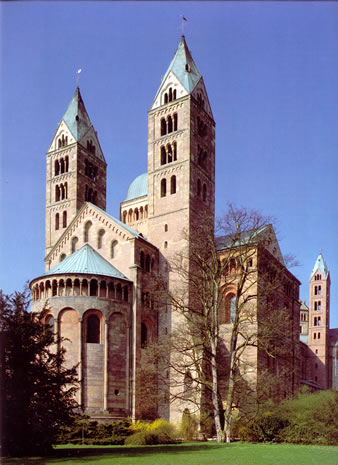 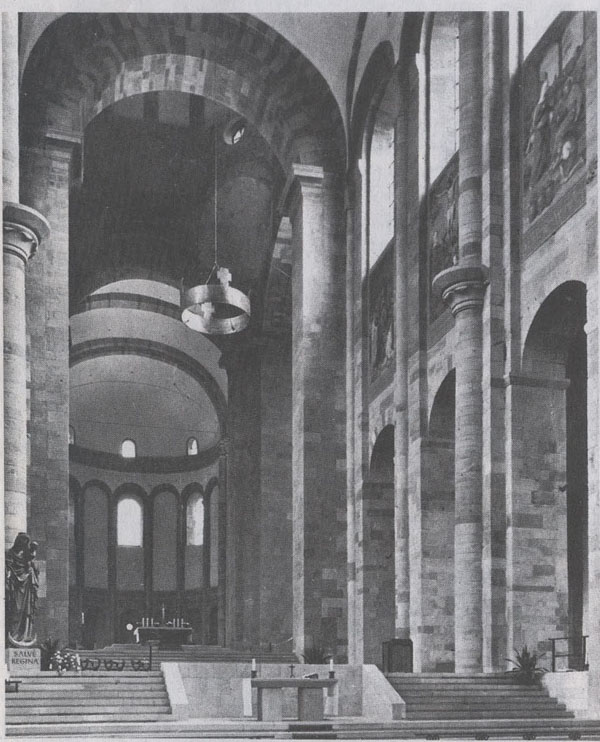 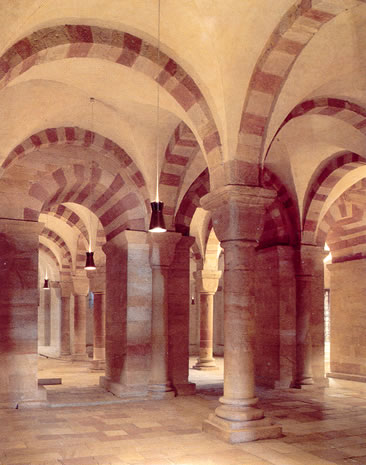 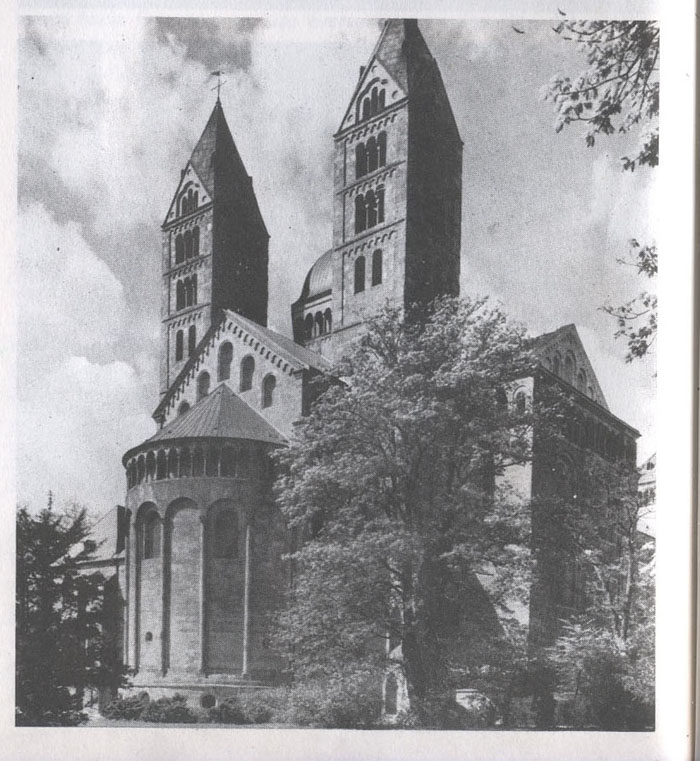 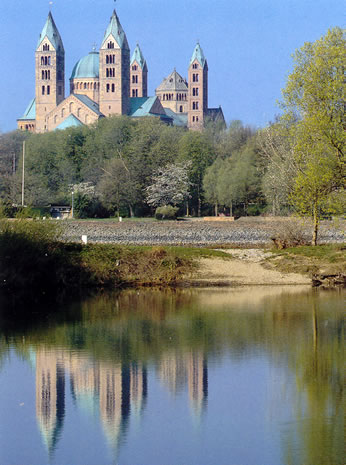 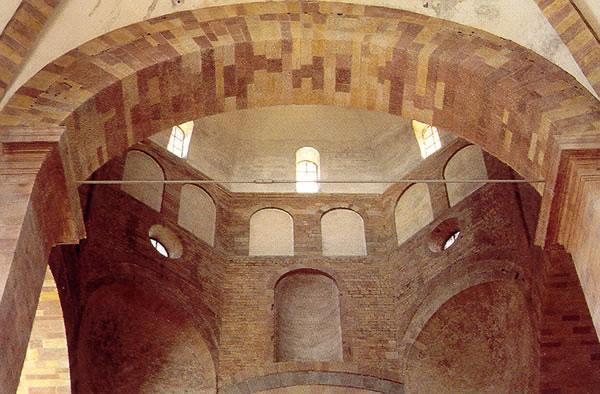 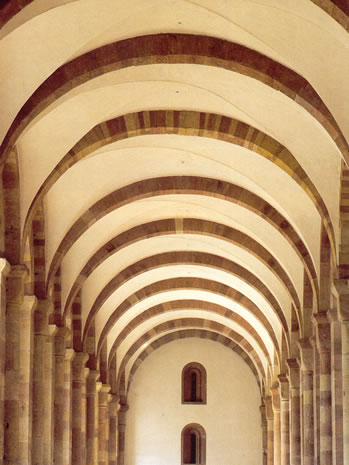 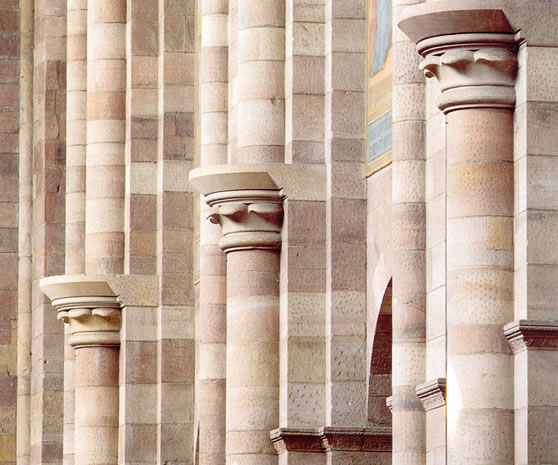 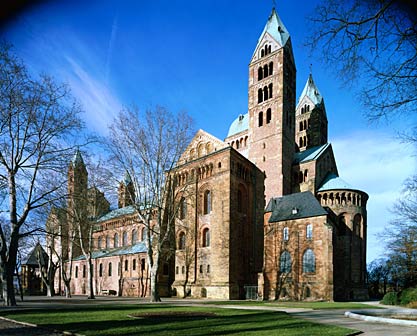 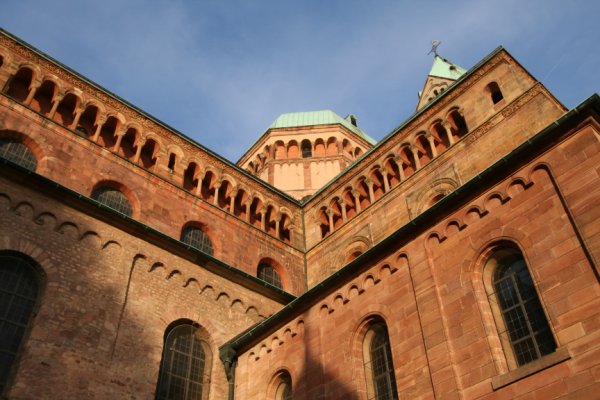 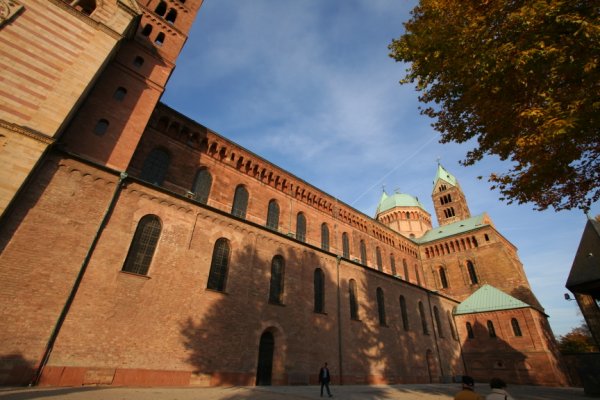 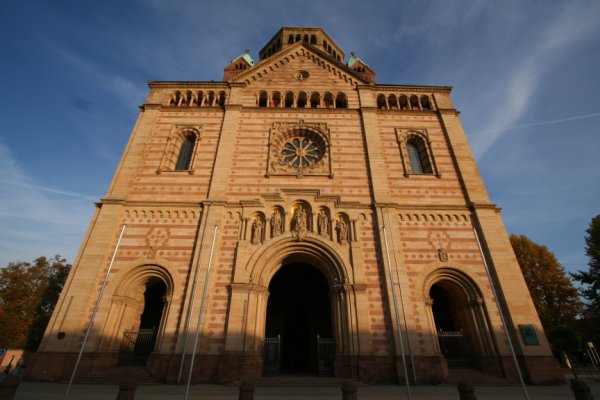 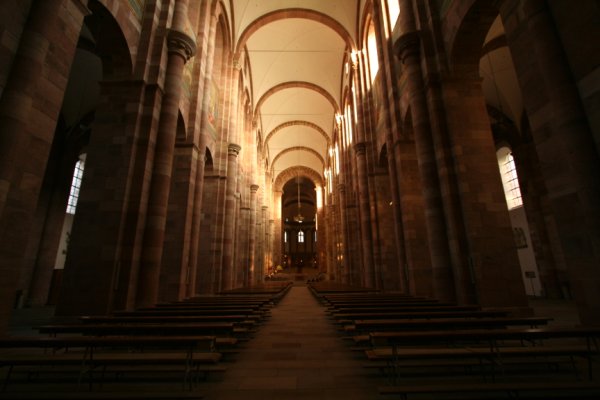 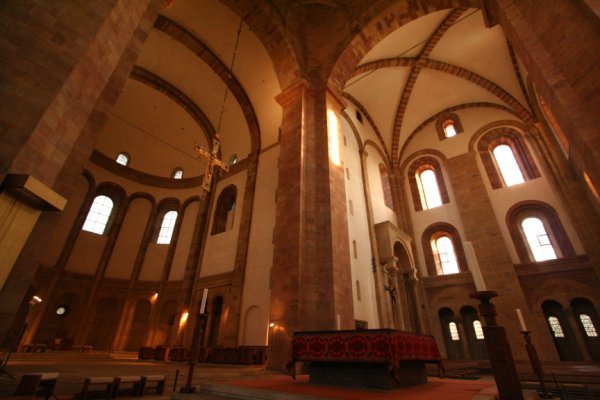 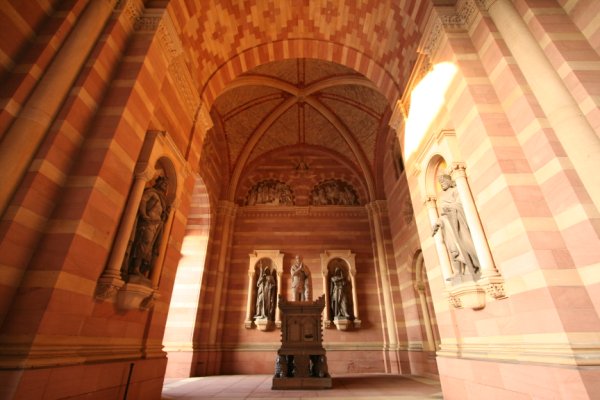 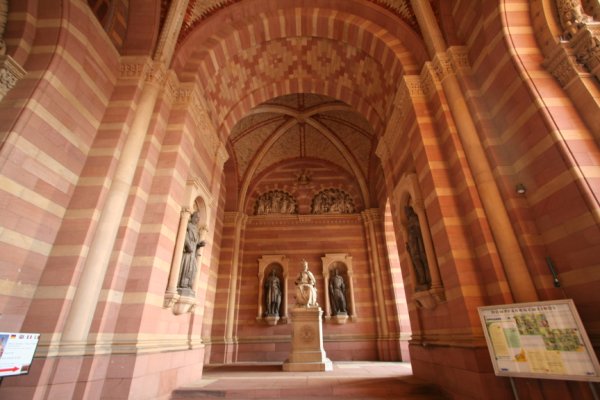 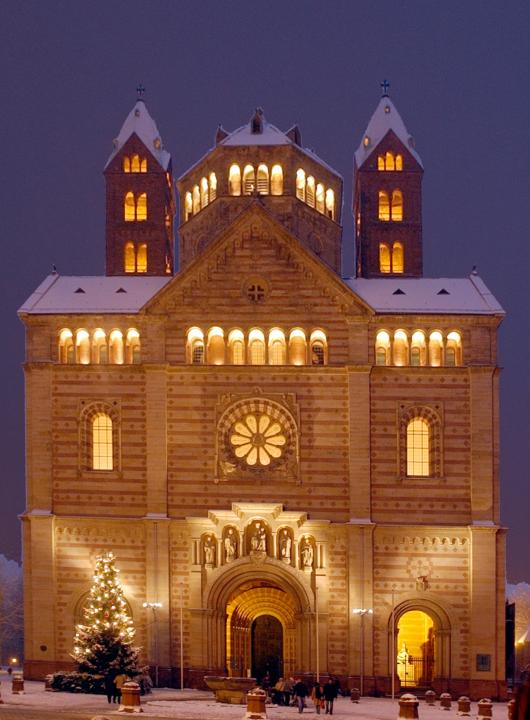