Spain Park Public Library, better known as Library Spain, is part of a series of urban projects and social development in this area of Medellin for the cultural and social transformation of the city.

For this work the architect Giancarlo Mazzanti has been awarded, at the Sixth Ibero-American Biennale of Architecture and Planning, Lisbon 2008.

Library named after Spain in honor of the contribution made by the government through the Spanish International Cooperation Agency with the provision of an auditorium.

The building as icon

The site consists of small brick houses fruit of self construction waste and green areas, all because of inability to build in the area on the slopes so steep. This organization produces a uniform texture of town without any visible element of hierarchy, which is why the proposed building in the city seeks to excel as a building-landscape, as an icon, built in the place and keeps the tension, geography as an element of hierarchy and the architecture and texture.

The project is visible from much of the city, as symbol of the new Medellin, making people identify their sector and develop a greater sense of belonging, so much so that today is one of the sights of the area.

The project is located in one of the sides most affected by the violence of the eighties, Santo Domingo, drug product that operates in the city of Medellin, capital of Antioquia department, Colombia, and part of the social inclusion agenda City Hall to provide equal opportunities in social and economic development to the people.

Medellin is geography, is mountain

The city is located in the northern Andes, one of the most broken topographically Colombia. Its main feature is known by its mountains, is this geography that defines the identity and image of the city, which its inhabitants take as an element of identification.

Rationale for the proposed urban integration

This border city is composed of an intricate network of trails, a product of displacement in the sloping topography, with no meeting place or places.

The project is organized under two structures:

The first of the buildings, landscape (rocks) and the second for a platform that integrates and transforms your deck into a square veranda overlooking the valley, thus the building strengthens the concept of venue, multiplying connections for the meeting, and allowing it to develop as a benchmark.

More than a building, what is proposed is the construction of a geography that is part of the valley as a mechanism for organizing the program and the range, and partially hidden addresses highlight the irregular contours of mountain, not as metaphor but as a form of space organization in place, folded and clipped a building as the hills.

A building and landscape tridimensionaliza redefining the folded structure of the mountain as a form and space, hence arises its order structure, negating the idea of landscape as a background and enhancing the building ambiguity-landscape.

This mountainous geography is the identification element of Medellin, and it is this image that points to the proposed city as part of the landscape that inspired the building and interpretation of the topography.

The proposed organization was made to break the program into three groups and integrating them through a lower platform, which allows greater flexibility and autonomy in their use, making that there is more participation from the community and each volume may operate independently.

This plant is occupied by a multi-purpose room which is accessed through a lobby where you can see the stairs leading to the next levels.

Repeat on both floors large halls dedicated to conferences, lectures, exhibitions and all kinds of meetings relating to culture and the eradication of social exclusion.

In this volume on the left of the central find the cafeteria and the auditorium with capacity for 179 people.

At this level, that balconea on the audience hall was located in a tent and placed the units from which they are handled lights and sound when an event takes place.

This volume deals with the height of the auditorium until the third level, which ends with the roof packaged for optimal use.

This level is devoted entirely to the library, integrated into the same a games room for younger children can learn by playing.

At this level and near the Library entrance is the reception.

Here was located a room called “My Neighborhood” where locals can gather to exhibit different experiences or points of view, or try to find solutions in an area where poverty and violence plagues most of the neighbors.

At this level three stores have been located.

This level has been divided into two classrooms where training classes.

The fourth level is occupied by a gym.

In addition to constructing a building that was recognizable icon from the valley, the other premise was to develop a building inside the user decontextualized and get him out of his relationship with his immediate environment of poverty, building a warm and recollection, based on skylight entry, which in turn enable a suitable environment for study and reading. That is why the building looks shyly to the city through small windows that hint at the relationship with the valley, letting the light penetrate through the top.

These openings are arranged without apparent plan and the outside look like a sort of shiny metal inlaid in the stone. The arrangement of windows not related to the tiering, which is possible thanks to the separation between the “skin” and the “bones” of each building.

The project is organized under two structures:

The first is formed by the artificial rock-like objects vertical buildings that organize the program in three large blocks whose structures are independent for each volume.

This project poses a double supporting structure: the first formed by a hinged metal membrane that supports self and outer skin weapon light clad in slate panels and the second by a concrete framed structure that makes up the internal volume is skin dilate to allow entry of light from above.

The second platform is formed where the rocks are tied buildings, consisting of a mixed structure of concrete-filled steel columns and a gabion retaining wall in stone and concrete in the back. This roof serves as a public square and views to the city.

According to him the architect;
“The construction system is a mechanism that allows us to build and define the purposes or desired actions, in this sense the system serves constructive and not intended as a structural element of truth: it leaves the depth model in which the structure must meet the image of the building, and the structure is freed from the burden of truth and develops as a mechanism to use what really interests us is how the community that uses and sees his building. The project must be socially useful and not merely an object that affirms notions of authenticity as the only proper way to do and experience architecture. ”

Its structure has been used primarily iron and concrete.

Covering the exterior slabs of slate were used with 30% black oxide layers covering the Super-Board. In the wood deck and stone floors.

Large acrylic yellow, green and red, indicate and highlight the role that unfolds within each of the modules.

Part of the interior floors are also of stone, combined with different colored vinyl.

To delimit the different educational areas have been used colored resin laminated glass inside and different wood veneers, such as covering part of the library.

Developed a temperature regulating mechanism, a “thermosyphon”, through the creation of an air circulation system by upwelling (negative pressure), removing excess heat and allowing the optimization of solar energy. 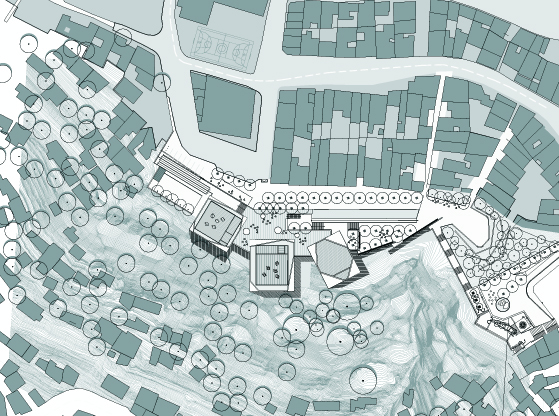 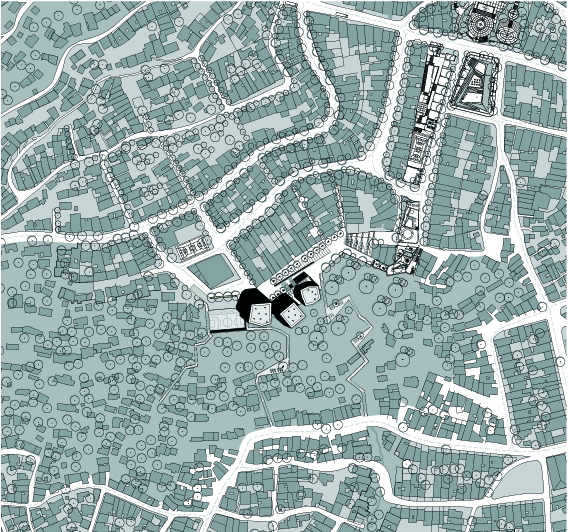 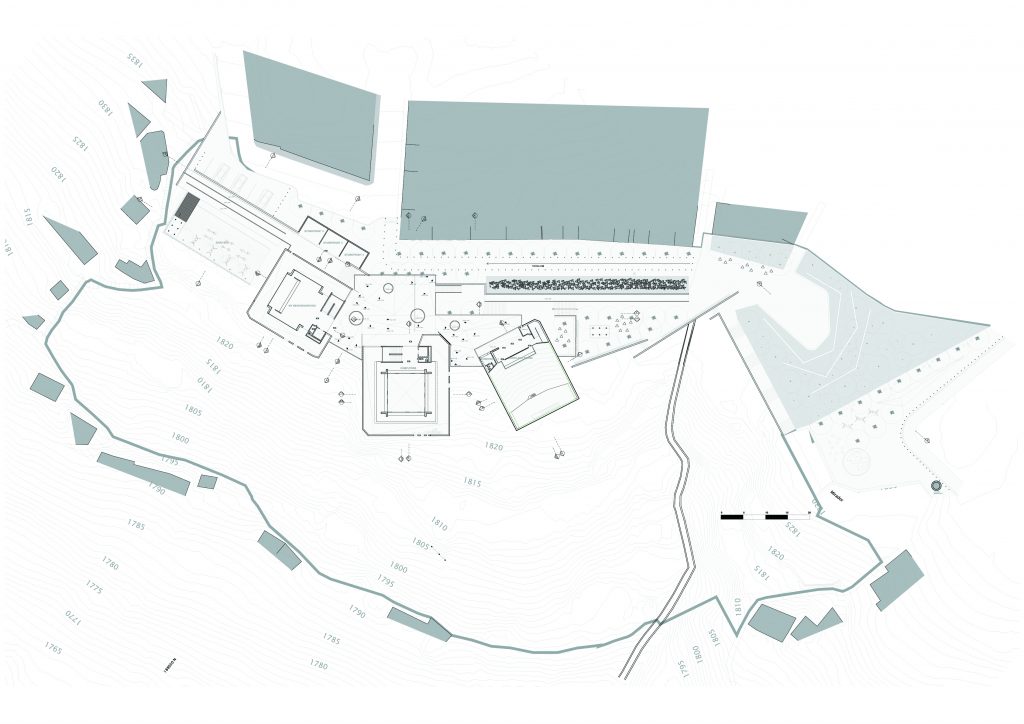 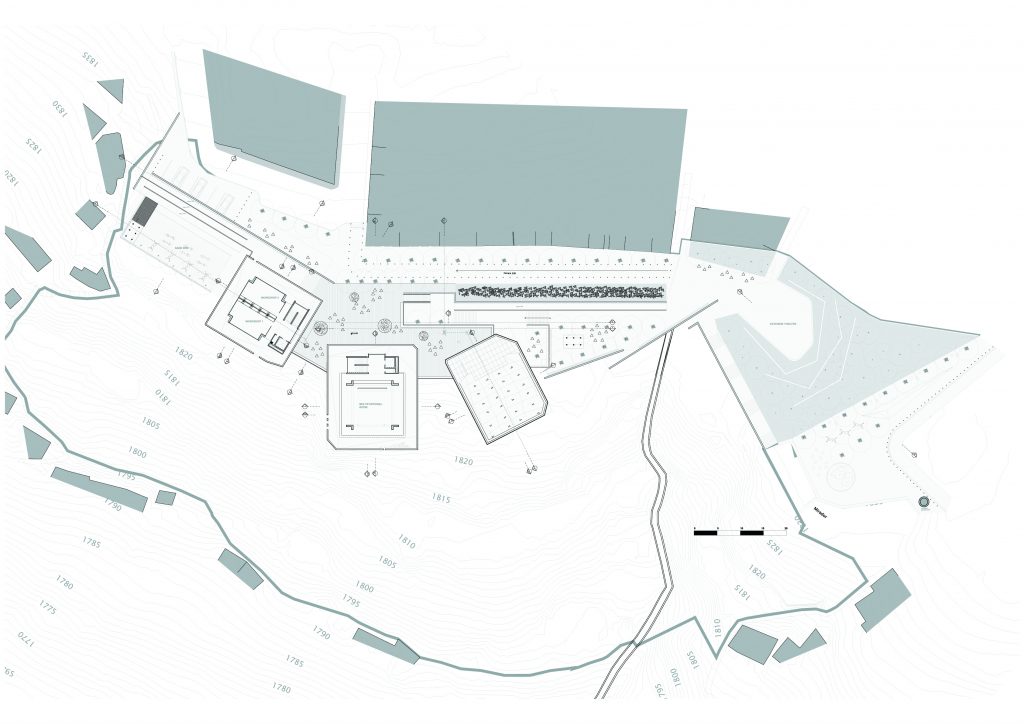 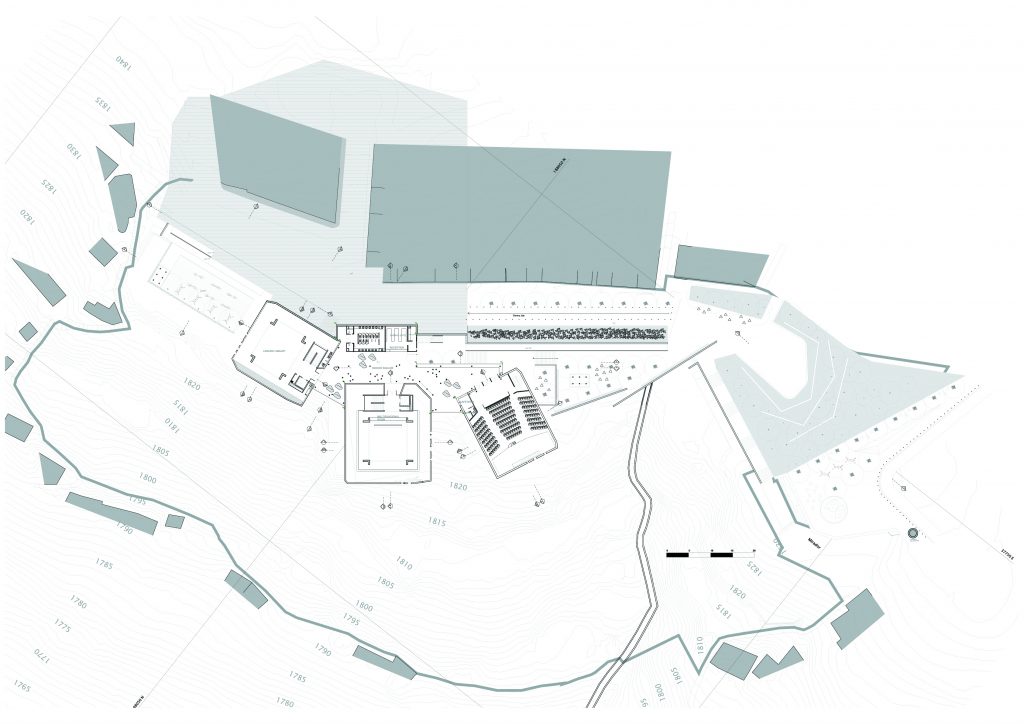 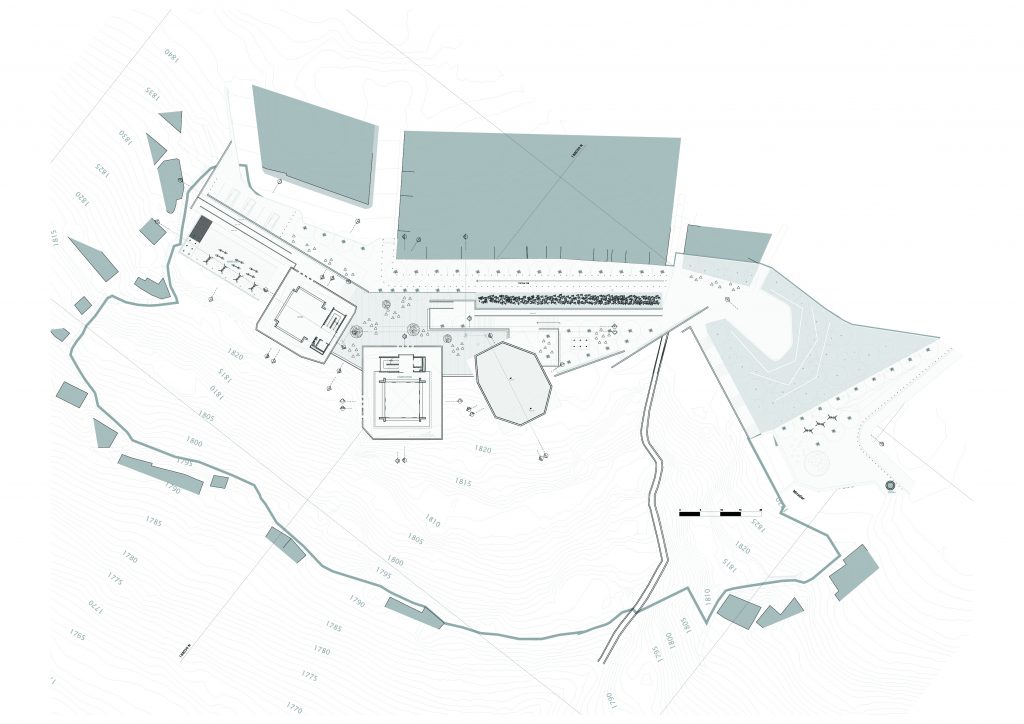 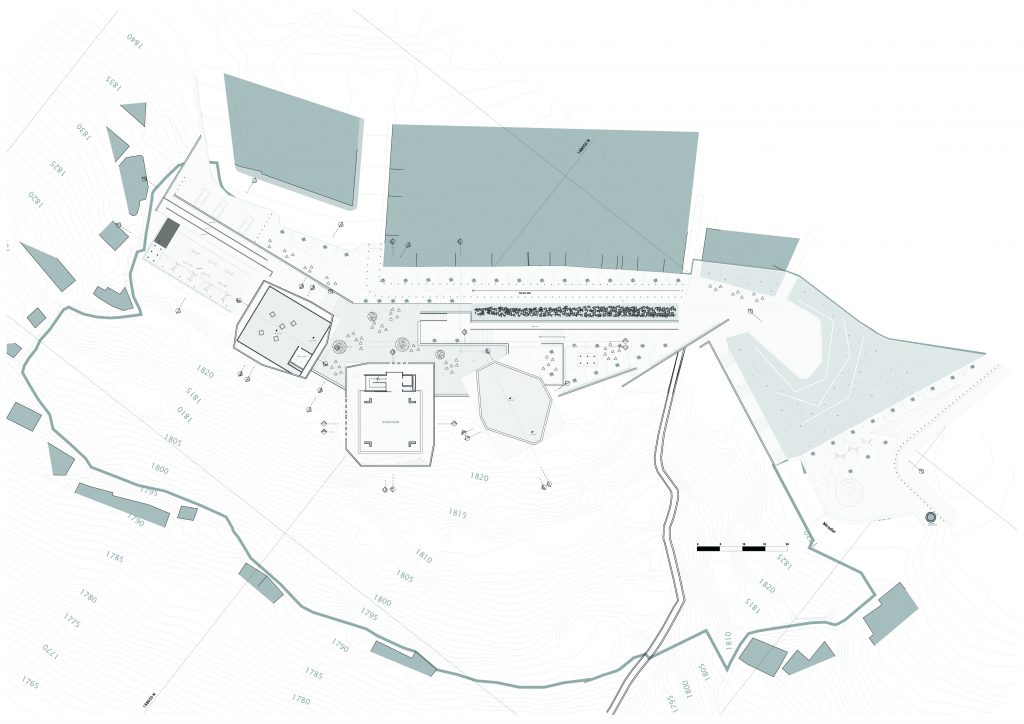 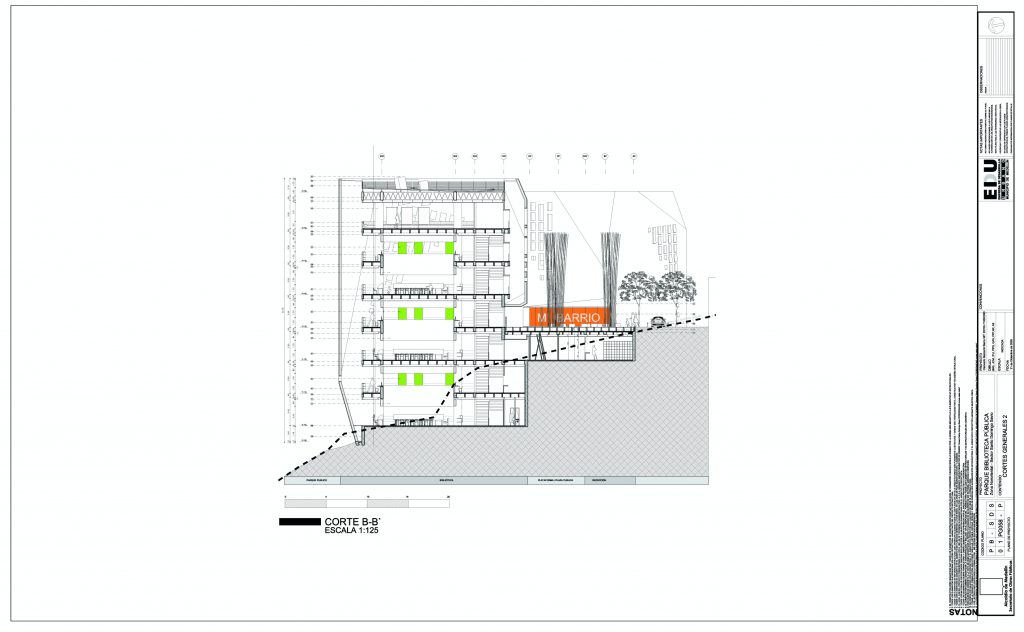 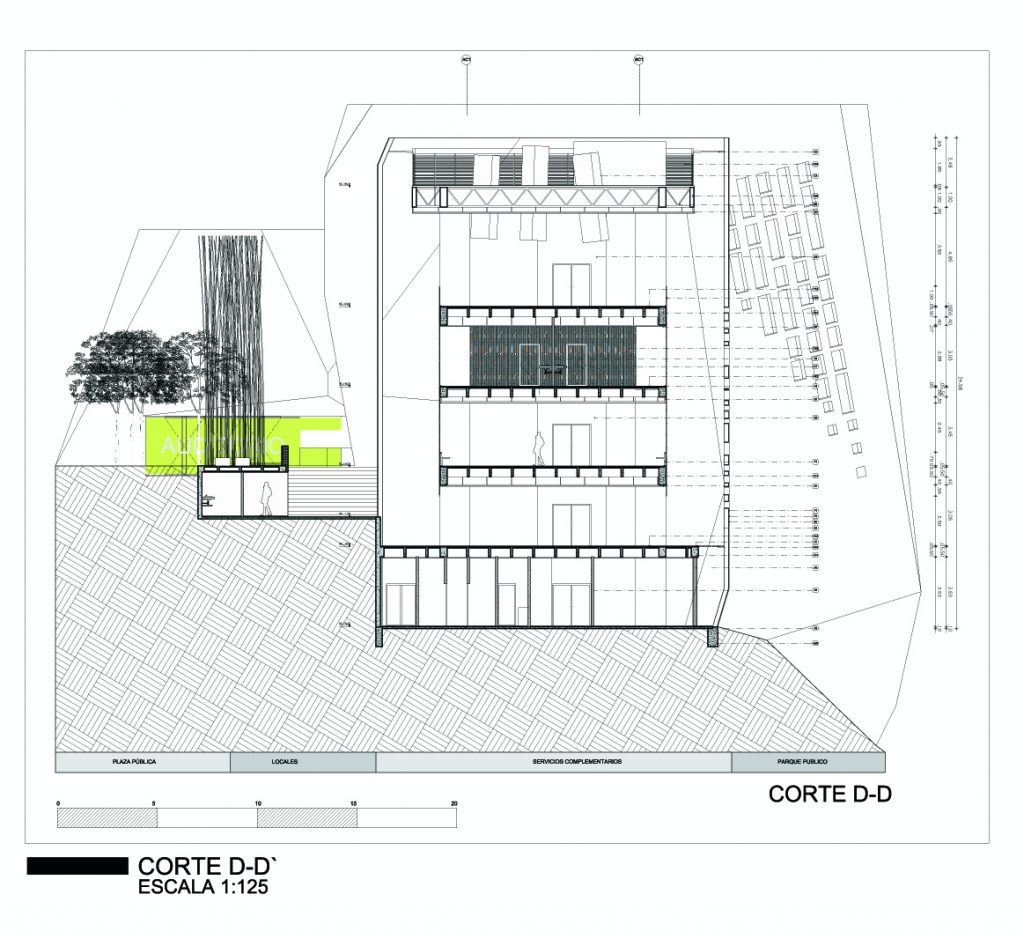 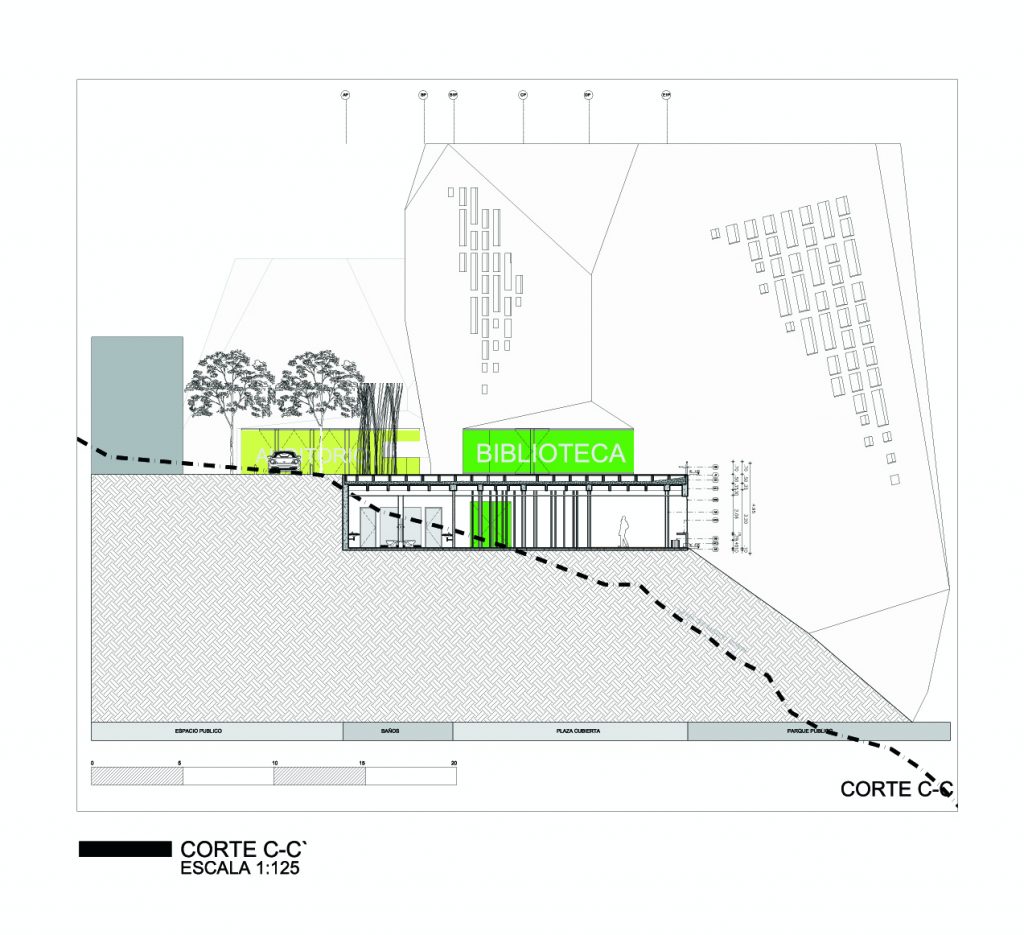 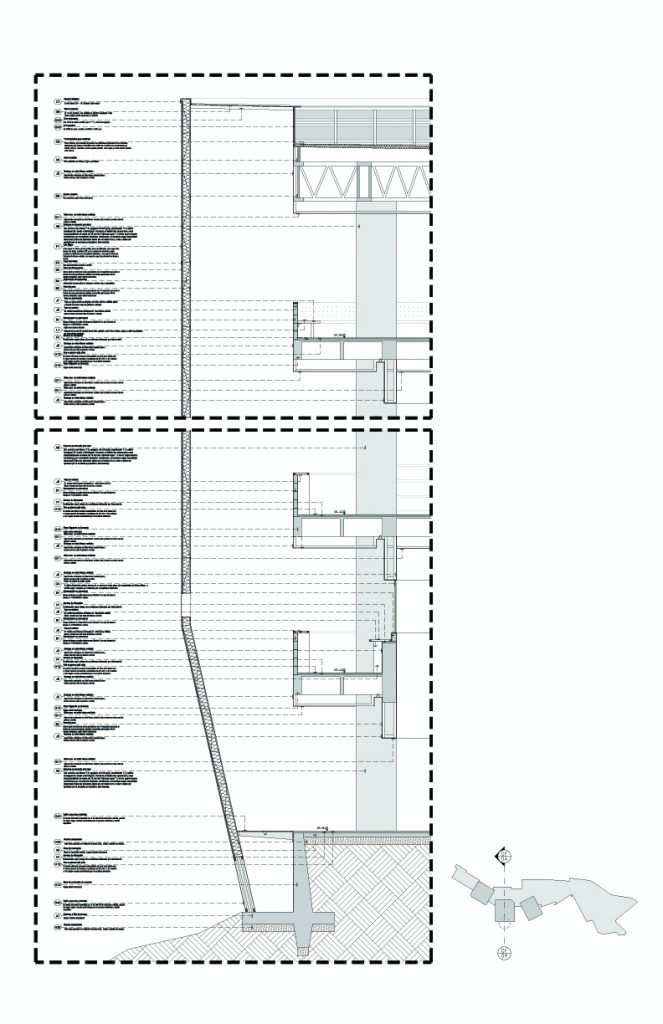 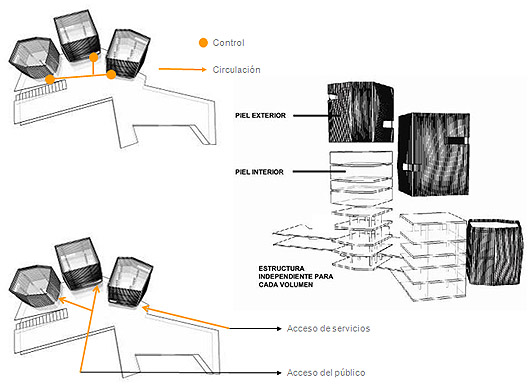 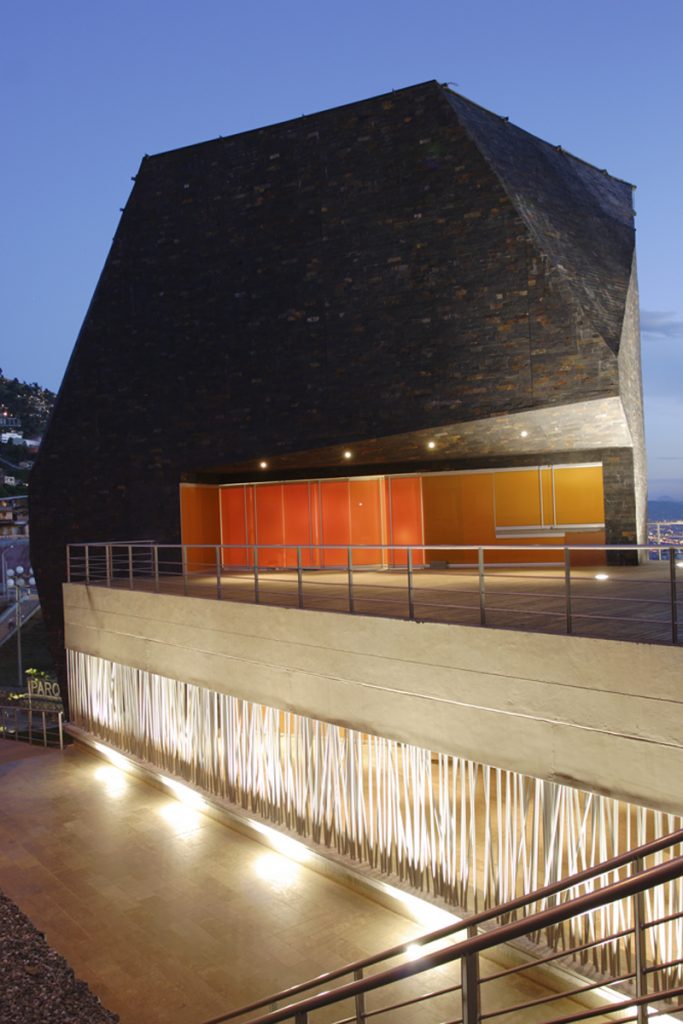 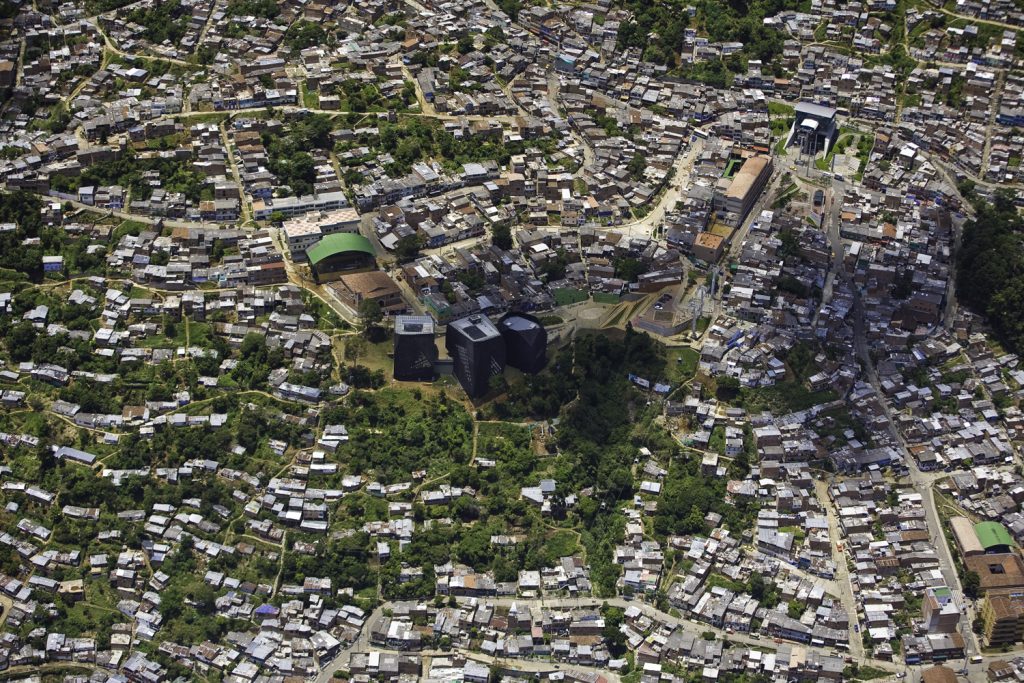 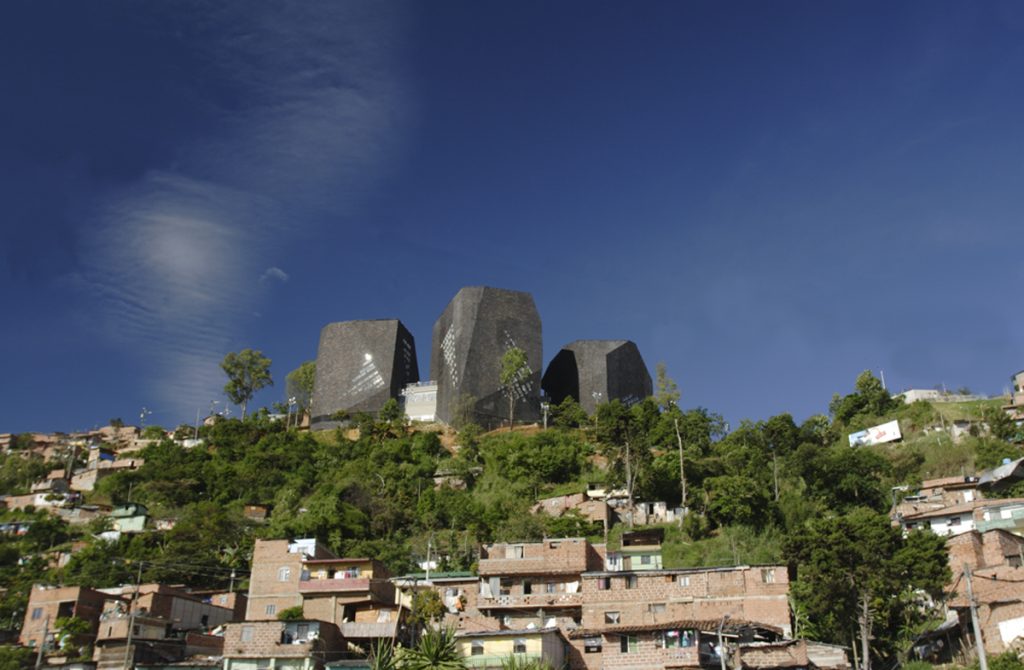 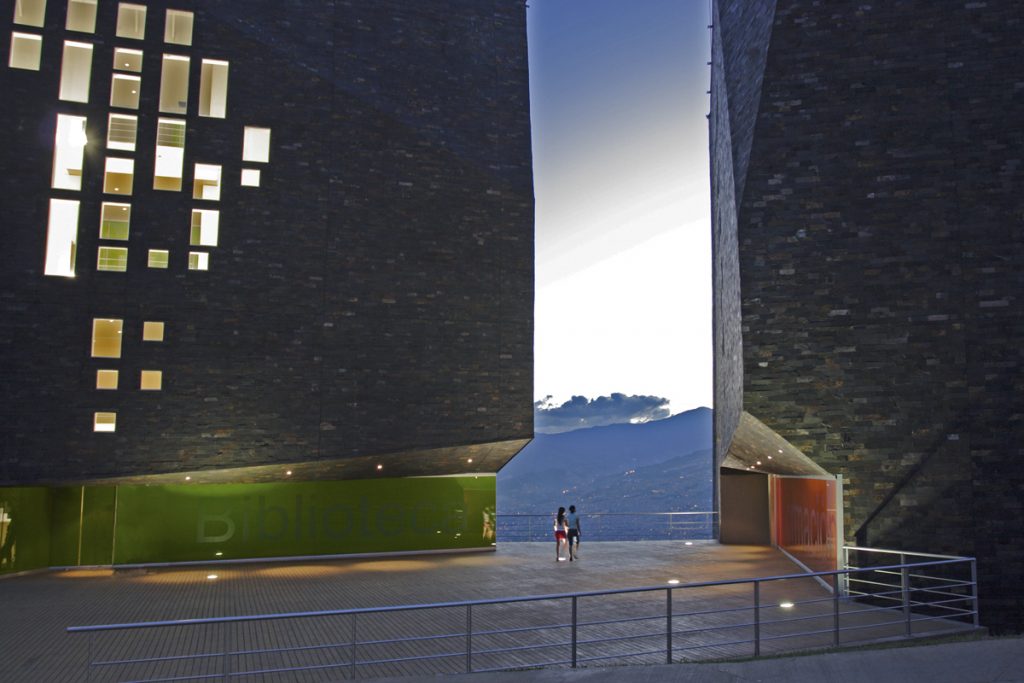 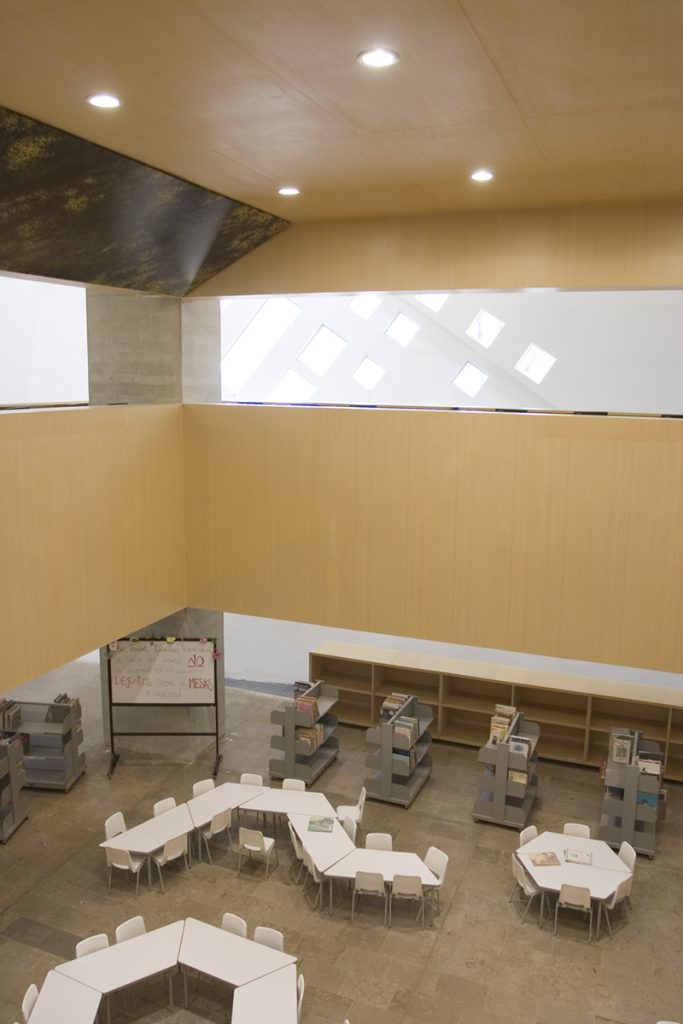 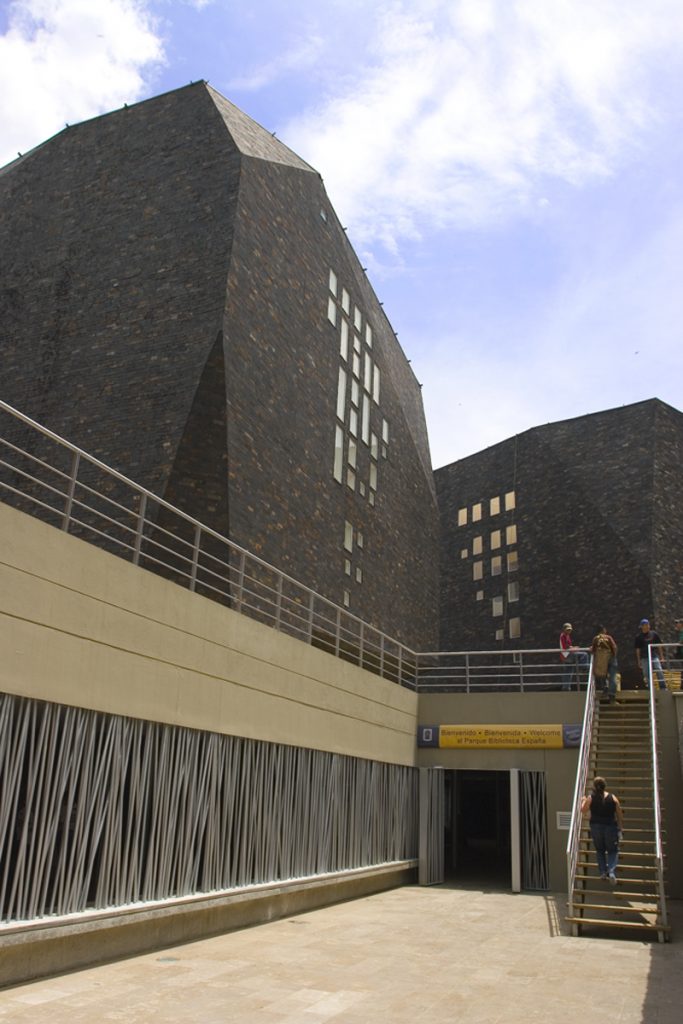 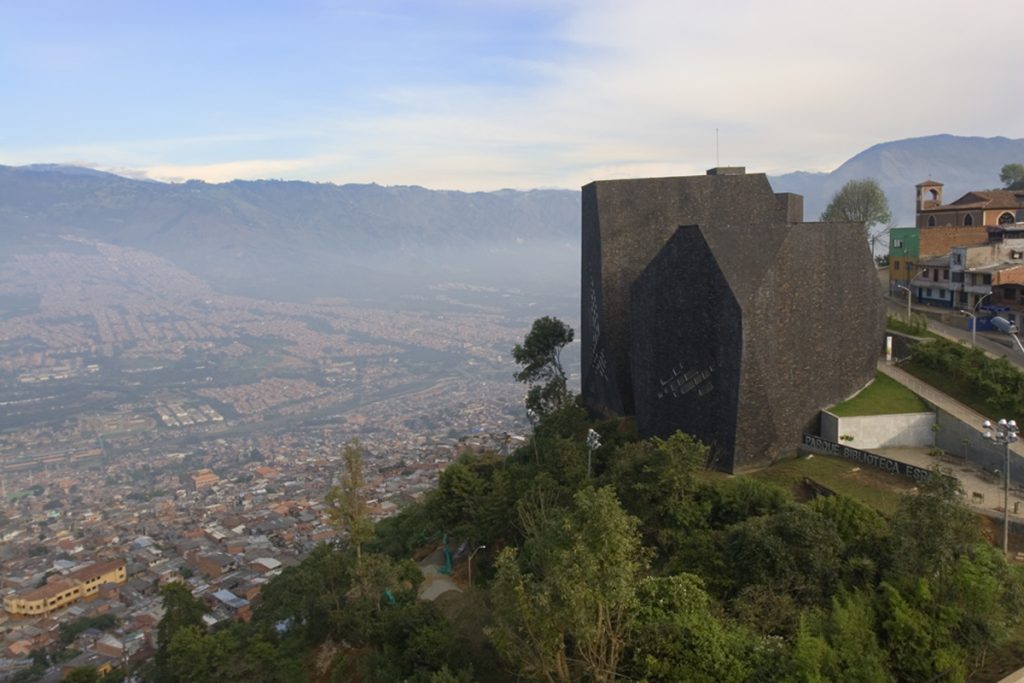 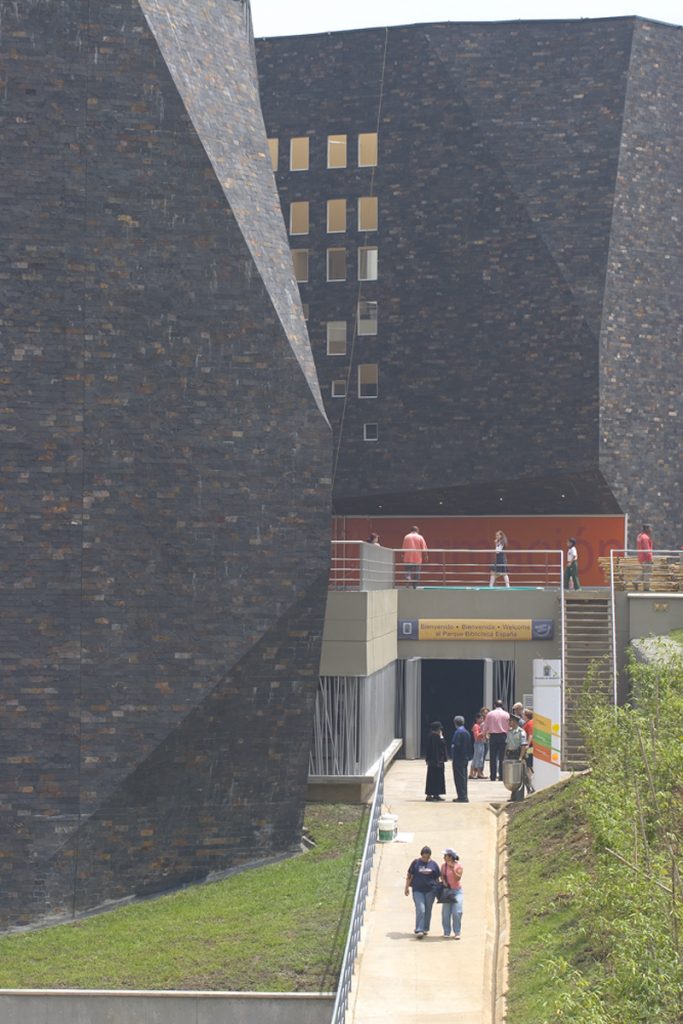 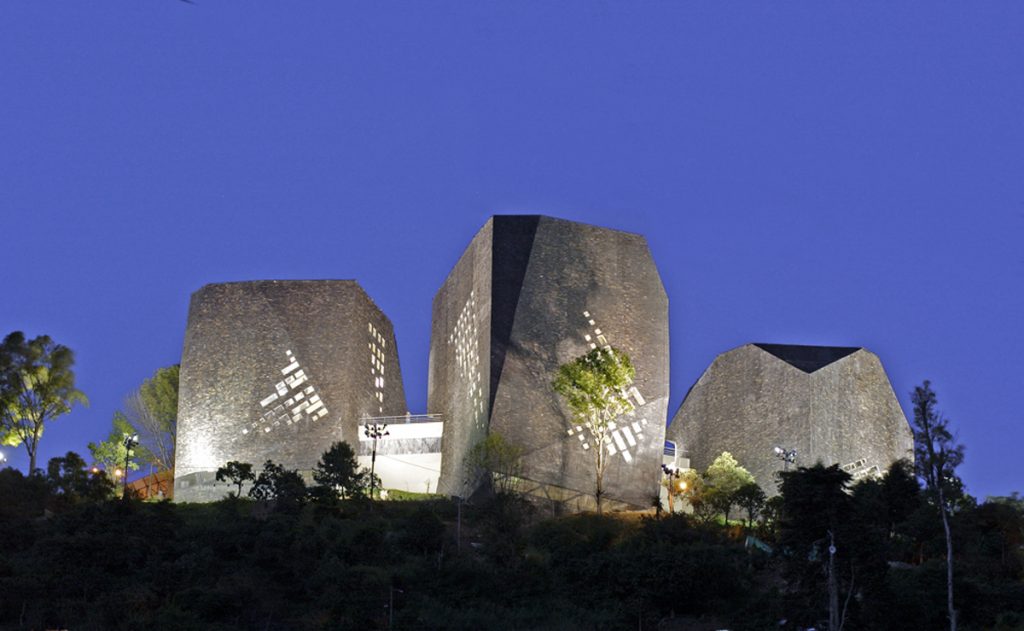 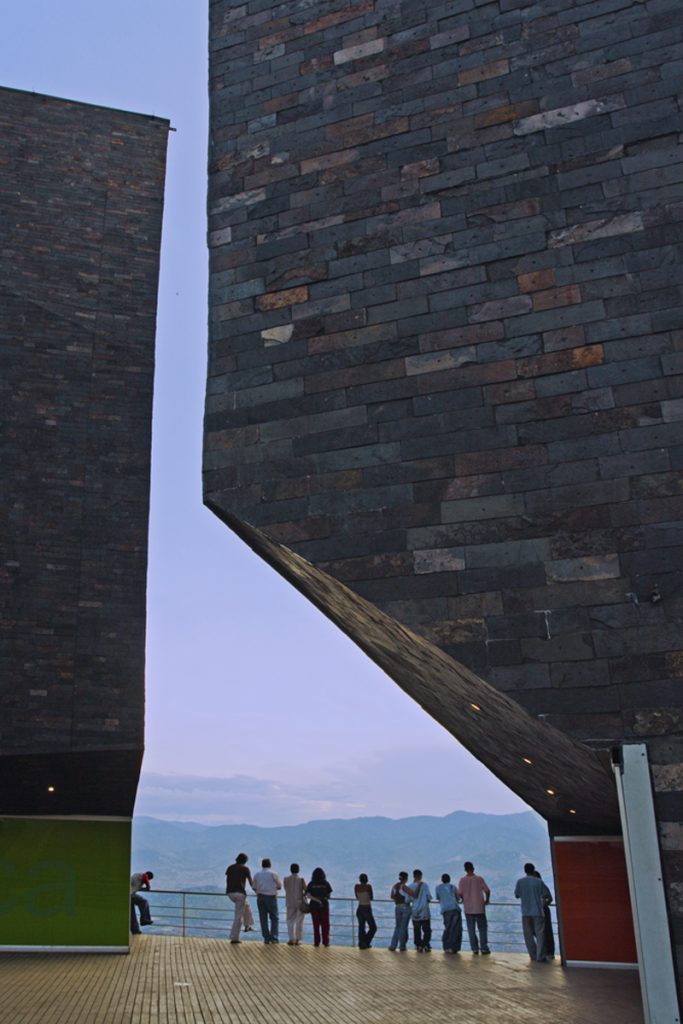 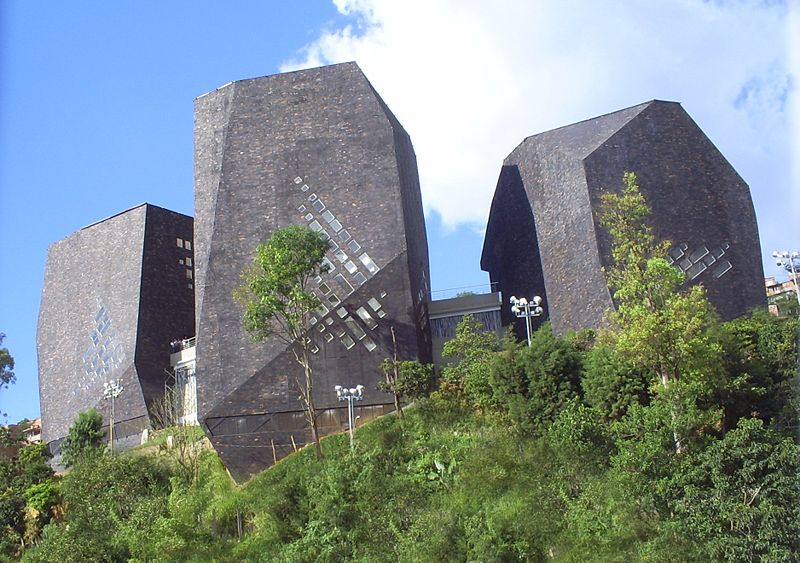 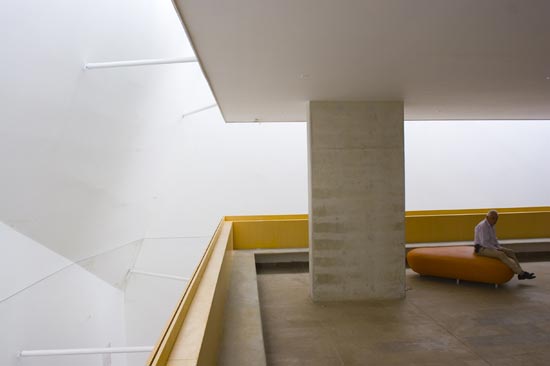 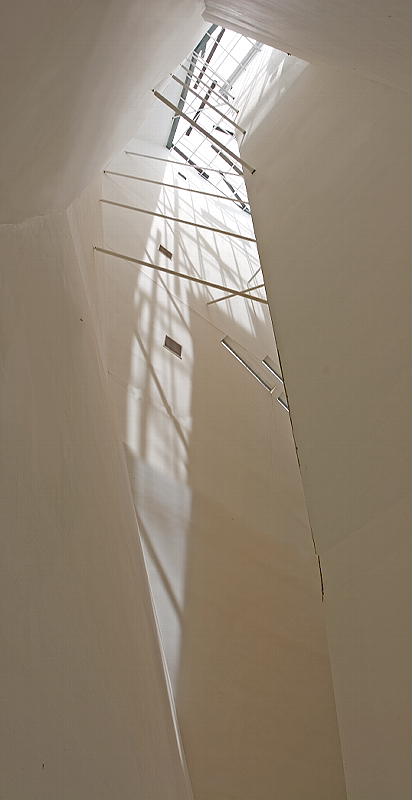 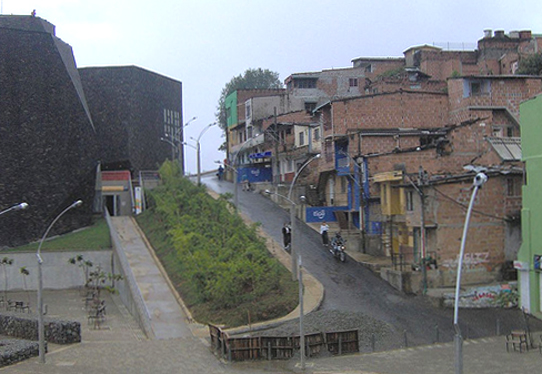 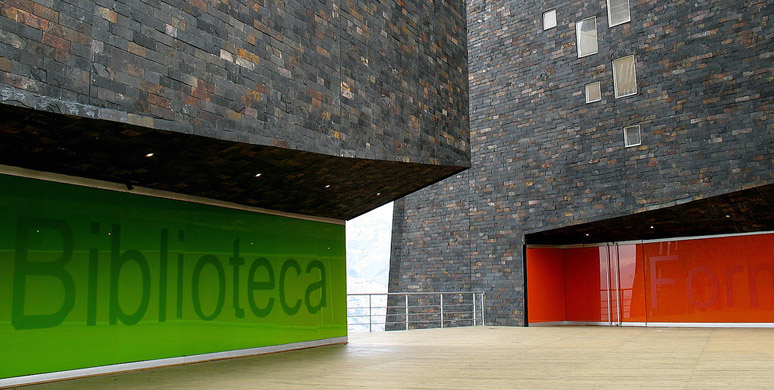