“Architecture is the study of forces and matter in their ways” (Le Corbusier, 1908. L’Eplattenier Letter)

The competition of ideas restricted convened by the IMS in 2004 continued urban expansion parameters of South Móstoles contained in the corresponding partial plan. To plot being the contest is determined a very restricted area movement compelling, almost, that any proposal would have to work with an L-shaped plan and a very deep bay. This provision, however, was inconsistent with the aim of generating a milestone planning right for the auction of linear space, as an axis almost baroque estructurase regrowth.

The geometry prevented further any provision that would work in a climate favorable due mainly to two reasons: the deep bay forced to distribute housing with interns and configurations available in L generated auto cast shadows, an effect which, combined with the unique orientation, generated a situation in which only 15% of households have adequate guidance and 5% scarcely possible to cross-vented.

A first proposal was to reduce modification of the building bay to 11 m, creating a tape while allowing all trainees would housing and most of them engrossed in a suitable direction, creating an interior space landscaped.

The next step arose from the combination of urban and climatic factors most relevant. On one hand, the desire to integrate the building into the urban coherence, making it the visual landmark beauxartiano shaft that from the South to the North, the new extension vertebraría, sewing it through the new building with the previous settlement. Moreover, the commitment to take advantage of a rigorous and simple great energy potential South orientation.

The landmark building should be balanced, the new backdrop of the city and follow your way to the sun as it moves across the sky… and the Chamber emerged Solar…

The Chamber Building was built in Móstoles Solar South, near the Plaza del Sol and the metro station Manuela Malasaña. Móstoles is a municipality belonging to the Madrid Autonomous Community. The sur Móstoles planning is part of a program of housing schemes undertaken by the Community of Madrid, since the early nineties of the twentieth century, under the management formula known as “urban consortium” 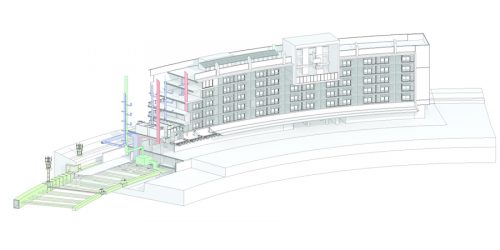 It is a unitary block, facing south and has a slight curve accentuating one hand, the auction Northeast axis ordering this part of the widening and hugging on the other, the public space.

The block appears as a sharp volume, containing clean and serene inside, and manifests on the outside, an organizational structure that responds to the calls programmatic, aesthetic and energy.

Sectioning this structure horizontally, appears a succession of interns housing modules located between two thermal mattresses. The first, facing south, is a glazed gallery which serves as the accumulation of hot air in the winter. The second thermal mattress is constituted by a succession of openings bioclimatic small yards and corridors oriented North and confined within a double skin. If the organizational structure is sectioned vertically, an outline appears divided into three distinct parts that refer to the classical tradition: a permeable base, a succession of “piani nobili” and a top formed by the roof garden.

Hemiclo Solar is a bioclimatic building with 92 apartments, commercial premises at street level and 118 parking spaces.

The buildable residential home runs with 92, operated under lease for youth and families with low incomes or in danger of social exclusion.

The houses are grouped intern available and are designed so that you can take advantage of the potential energy difference between the South and North directions. The initial idea and form generator is simple: the spaces should be as fluid as possible for air to flow easily through them, flowing from the south well once warmed-well solar galleries flowing from the North once it has captured the fresh wind from the mountains during the summer nights.

The Comercial Space and Garages

Segregation of use between homes and commercial strip is solved by a canopy of 8 m free flight, in turn, protects the floor space of the excess radiation and rain.

Under this canopy of frank inspiration in the tradition of the arcade Castilians, have access to housing and placed the commercial program developed in a strip interrupted only by gaps that function as public and encourage steps permeability between the public square and the garden area behind the building.

There is a modern tradition that dates back to the housing unit and Le Corbusier, however, has had little success in the architecture of the past thirty years: indoor consider both as a public space as an ecological footprint of the land reclaimed.

Solar cover Hemicycle is determined with a solution of organic cover that through evapotranspiration plant gets significantly dissipate thermal loads due to incident radiation.

The cover also conceived as an extension of public space for social exchange of people and sport, is colonized with pergolas that, while protecting from solar radiation, allowing the integration of photovoltaic panels.

The materials used in the construction of the building are reinforced concrete in situ in its foundation and structure, rolled steel, concrete blocks, precast elements, bricks, cellular polycarbonate panels, exterior carpentry, glass, plaster boards in the interior partitions, fiber insulation and pvc downs, all materials used in any current construction budget. But what really makes a building unique Solar Chamber, and bioclimatic remarkable, is the system used to save energy and reduce up to 87% of CO2 emissions into the atmosphere. 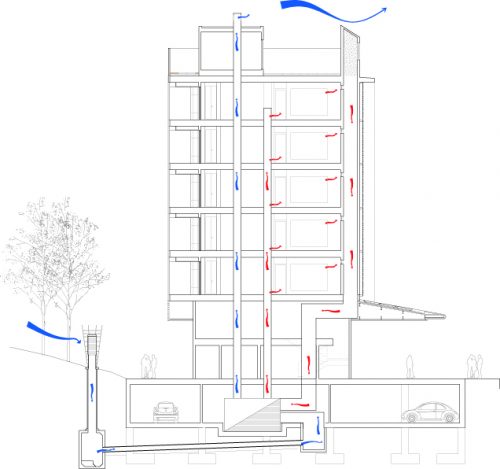 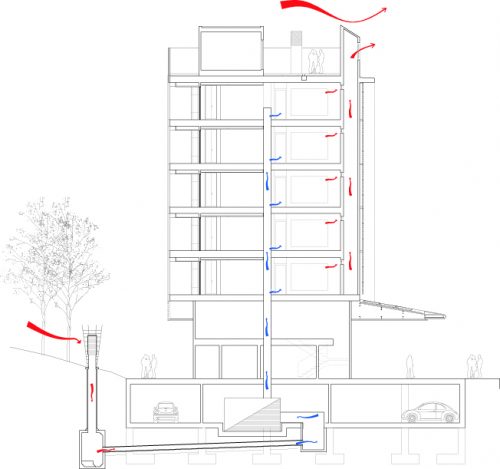 Systems of power generation assets have been integrated into the architecture of the Solar Chamber in a way consistent with the geometry of the building and appropriate to the conditions of solar radiation.

The provision of 275 m2 of photovoltaic panels, with an estimated production of 55 MWh / year, was conceived in a network composed of pergolas whose inclination, while providing shade to visitors of the building’s envelope, optimized the efficiency of these panels. For budgetary reasons, the property decided to dispense with these pergolas and photovoltaic panels were located on the roof of the boiler room reducing the m2 installed.

The panel system solar thermal collectors, with a total area of ​​140 m2, were conceived in the marquee built on the ground floor, so that the self shadow cast by the building during the summer would help to avoid this undesirable overheating own systems. Finally, the panels were placed on deck. These panels serve two solar storage tanks 6500 liters capacity and a DHW tank of 1500 liters capacity.

Photovoltaic Panels: 275 m2 with a production of 55 MWh / year. Finally installed m2 were reduced due to budget cuts.

Energy savings: More than 50% savings in CO2 emissions and fossil energy consumed according to a conventional RITE.