Begues locality is in a privileged position right in the massif and the Garraf natural park, about 25 miles west of Barcelona.

The site where they implant the 18 public housing is at the crossroad between a block of flats in a row and a series of single-family residences. The first, even with a limited height, are a piece of urban strongly that clogs the territory in which it is implanted. The second, far smaller, they breathe in a few places where there is abundant vegetation.

This is a slightly sloping ground from the street into the interior, which is in its longest direction southwest, where there is not only the best conditions of insolation but also, today, more distant views toward the Coast Range.

The two main determinants of solar, found between two different housing types and their orientation, which will result in the two premises that governed the design of new housing.

The building housing will therefore be to make the transition between these two types while taking advantage of solar conditions.

In parallel we must have a building that can be extended in the longitudinal direction of the field, but while at the same time that homes are oriented toward the south and not directly facing the surrounding properties.

Given the constraints of buildable area and height regulator, the solution is quite immediate six apartments per floor, ground floor and two floors. These are grouped into two nuclei of stairs giving access to three homes per floor.

Live in Block A have one, two and three bedrooms. In block B all homes are two bedrooms. The Boque A is intended for young people and the block B to seniors.

To facilitate accessibility, there is a lift in each of the two communication centers, although the total number of plants not required. All common areas also allow for easy maneuverability for people with reduced mobility.

Parking, for a total of 21 seats, is located in the basement. Your access results from the northwest side, so as not to interfere with either the direction or with the good parts of being. Although the building has a geometry of setbacks, parking takes the regularity of the central bays to be provided as a linear block that is easy to use. The basement also has 21 storage rooms.

The homes are virtually unique model for the whole of the eighteen to build. They have an L-shaped and permit direct ventilation to the outside of all parts, including bathrooms. It Maclan one another so that all living areas are well targeted and have openings in both southeast and southwest, in order to ensure that even in the winter solstice, the solar radiation they receive necessary. To regulate this sunning, are preparing a southwest Folding metal shutters that allow sift its incidence. To the southeast, in contrast, have eaves that avoid the summer sun but facilitate the transition to winter sun. At the confluence of the two approaches, the eaves are complemented by shutters to prevent heat stroke in the most unfavorable.

As part of the residents will be elderly and, therefore, bear a rather sedentary life, it seems appropriate to living rooms giving access to relatively generous terraces where these people can spend time sitting down to enjoy one’s own garden area.

This arrangement will also ensure the privacy of homes since through it, not only all living rooms are well designed and protected the views from the street, but very few other parts of the site give the fragment where the goals are accessed. This block prevents zig-zag, while imposed on neighboring houses as it would if it were a geometrically compact block.

Inside the homes, the kitchen is available and open to the dining area extends as a dimensioned so that it is possible also to make the laundry, so that the spaces in common use during the daytime hours are all interconnected.

In order to meet the requirements of visibility, hallways, not overly long, articulated so that, in addition to the living room, located at one end, there is always another space, the lobby for access, allowing the turn of a wheelchair. The bathrooms where the shower space is integrated in the horizontal plane, are also handy for people with reduced mobility.

To enhance proper ventilation of the few spaces that do not give facade creates an inner courtyard that accompanies every high staircase. This acts as a large patio fireplace, convection, improve housing conditions thermometer.

Next to this internal space goes to full height ventilation duct register for the passage of the facility, so that the distribution of these characteristics is clearly and rationally and to facilitate maintenance. On the cover, makes use of the stairwell and lift the box to place the solar collectors that enable the production of hot water through renewable energy. In the basement, in the common area of the stairs and elevator, provides a space for selective storage of garbage. 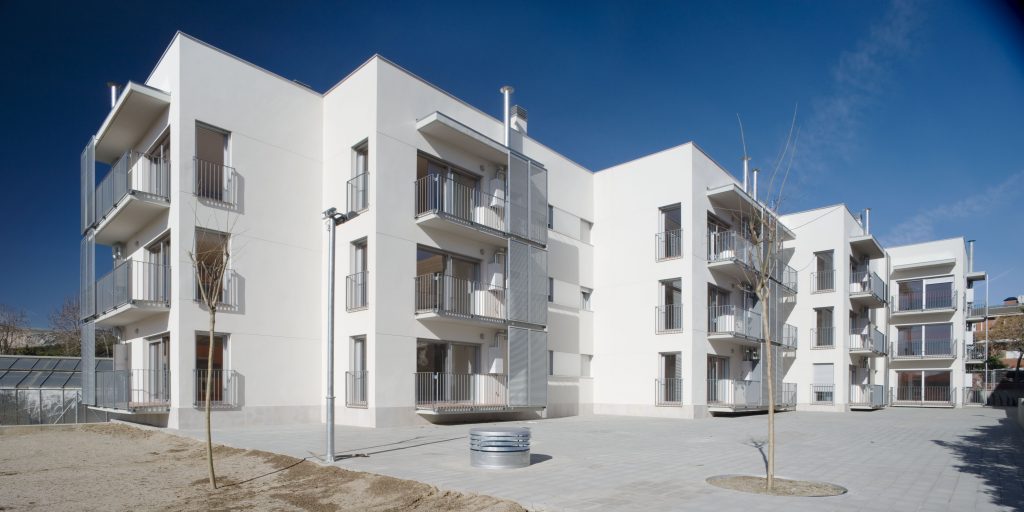 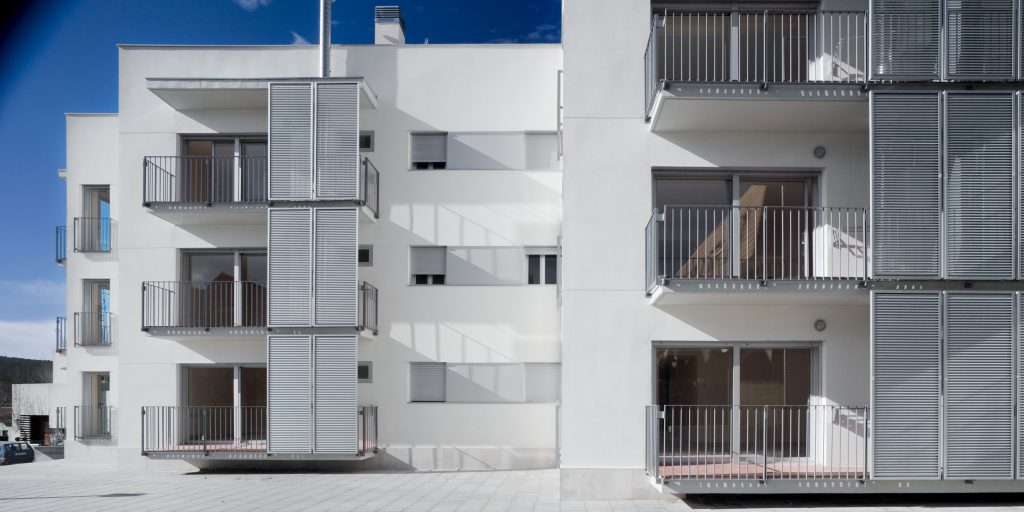 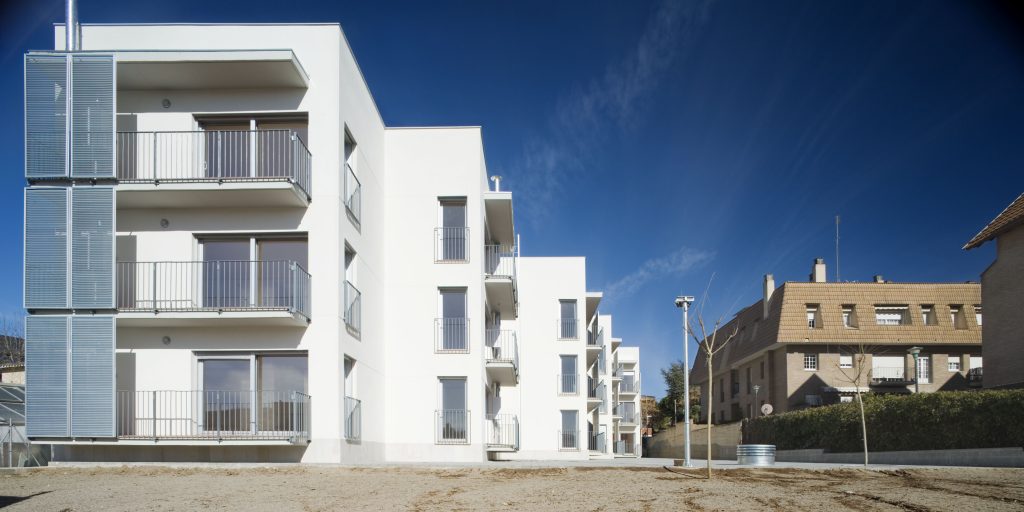 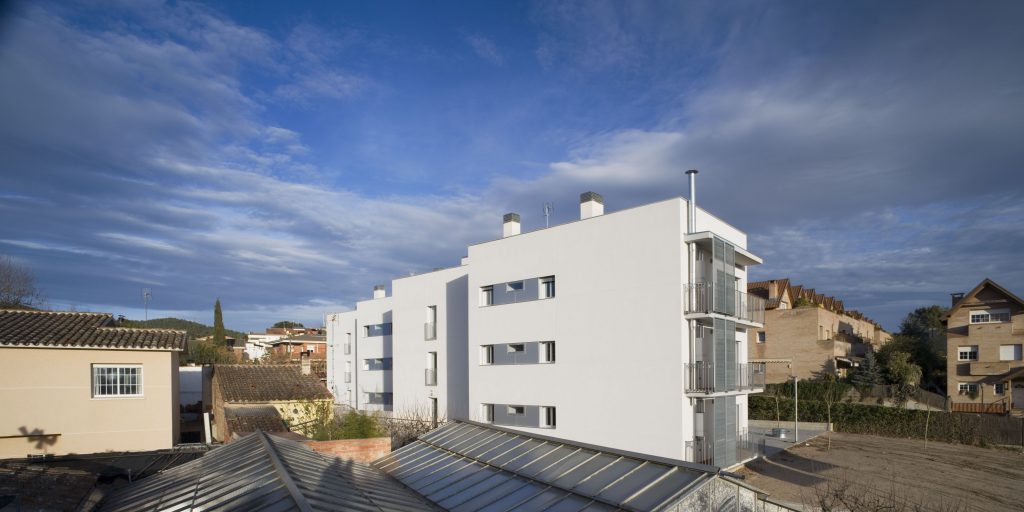