This is one of the first projects undertaken by architect Kiyonori Kikutake (1928-2011), one of the founders of the movement Metabolist Japan. After graduating from Waseda University in 1950 Kikutake completed two housing projects and a cultural center. In 1958 he built his own house in Tokyo, the Skyhouse.

This was a marked era in architecture Japan, by the influence of modernism and Le Corbusier especially. The influence of Le Corbusier reached Kikutake through the incursions of Japanese architects in the CIAM 8 (Hoddesdon, England, 1951) and successive congresses. In these, Japan could come into contact with Western ideas and the modern movement, and the use of concrete. From CIAM 9 (Aix-en-Provence, France, 1953) also begin to be influential ideas of mega structures of Team X, with Alison and Peter Smithson, on the issue of aggregation and urban growth.

These experiences gave a basis for the development of the movement Metabolist Japan, and ideas for one of the urban problems that emerged after World War II, reconstruction of the cities. Metabolism was a radical utopian movement that sought solutions to this situation.

One of the issues addressed in the CIAM was the approach of the architecture to the industrial world and its remoteness from the craft. The Metabolists joined this trend. Although the manifesto Metabolist by Kisho Kurokawa, Fumihiko Maki, Masato Otaka and Kiyonori Kikutake dating from 1960, in the project Skyhouse and you can see some identifying features of the movement.

The Metabolists believed in the separation of the different parts of a project based on their usage time or duration. Thus, the structural parts of a building would be more durable and parts susceptible to a change of use would have a shorter life easier flexibility. These ideas were connected in some way with the idea of Le Corbusier to see the house as the “machine for living”.

Thus the Skyhouse becomes an example of a single-family home can also serve as a manifesto of an architectural idea, it is not necessary to use large projects for it.

Following the completion of this project, Kikutake became one of the leaders and spokesmen Metabolist movement in successive congresses and events on architecture, launching this movement at the World Design Conference Tokyo in 1960. His work also He showed the important part of the Museum of Modern Art in New York, thanks to an exhibition called “Visionary Architecture” in 1960.

Kikutake followed considering and modifying many of its projects, including this one, during his professional career. Tectonic vision of human scale, and change has influenced many architects who worked with him and have special reputation today as [: Category: Ito, Toyo | Toyo Ito]], Itsuko Hasegawa and Hiroshi Naito. Even Kazuyo Sejima has come to mention that having seen the Skyhouse in an architectural magazine was what the call to become an architect.

The project is an open and flexible space, high above the ground by four concrete pialares to 6.4 meters high. The furniture, made from portable system called “movenette” by the architect, is consistent with the flexibility of the architecture. All this springs from a particular view; as Kiyonori Kikutake, the architecture needs to adapt to change.

This provision allows the eventual exchange open spaces or the addition of these varying compartmentalization and kitchen, bathroom, children’s room, living room, etc. They can change places at all times. The project itself is an exploration of the changing systems.

Kiyonori kikutaje came from a wealthy family after the Second World War was in a situation of poverty. This I influence and the architect’s vision and made him consider the idea of ​​adaptability and change.

The Skyhouse, designed and built by and for the architect Kiyonori Kikutake, showing it Metabolists ideas on a domestic scale. The architect shows his rejection of functionalism placing the free space in the center of the house and servers bordering the perimeter of the housing spaces in the interior is typical of the traditional houses of Japan. All around this central space is a balcony that wraps around the building.

The pillars are located on the shafts of each side of the square forming the housing to release the corners. In addition to supporting the slab, the pillars also support the concrete roof.

The home space is defined by the permanent spaces, which need not undergo changes, and temporary spaces capable of being changed, deleted, added, expanded or reduced in size. The latter, called “movenettes” control the relationship of the building with its surroundings. Among the changeable units are the children’s room, kitchen and bathroom. This change facilitates the idea of ​​adapting the house to future needs.

The first volume was added to the building was the children’s room, plugged in a small space under the floor of the home, a “movenette” which could be removed when the children become independent. In over fifty years of life of this building they have been many changes, some consistent with the nature of it, others will inevitably against.

The flexibility of the project shows the influence of the ideas of standardization, volume, the use of cells and hybrid applications received from Europe through the CIAM. The space is also aesthetically resembles the architecture of Le Corbusier when you consider the type of structure you use, the open floor plan and free facade on stilts. The cover acts as a volumetric umbrella under which the rooms of the house are a flexible space to be inserted, following the idea of Le Corbusier of “parasol or universal coverage” implemented in the project of the Parliament of Chandigarh in 1953.

Of the five architectural principles established by Le Corbusier, this proposal met all but one, the flat roof. The cover takes a shape resembling the native architecture, taking a first step towards the idea of ​​critical regionalism, an architecture that takes aspects of modern architecture but always taking into account the place where it is located both topography, and climate or the culture. Japanese architects of this era used the ideas of Le Corbusier as a means to get away from tradition and do a simple modern caricature of it. This also trying to cater to contemporary needs that people have about architecture.

On the cover Kikutake mixes traditional Japanese style with Western version for a more practical structure. The best concrete deck supports force caused by strong winds and has more dynamic resistance, allowing cover larger distances with the minimum use of material. The truss system was an innovation for the project, so experts in their application had to engage in construction, especially in the corners and joints. The buttresses of the roof, reminiscent of the place for ornamentation in the traditional Japanese roofs, bring more balance and strength to the assembly. To Kikutake redesigning the cover gaskets was allowing this operation regarding the Metabolists construction principles, interchangeability and flexibility. 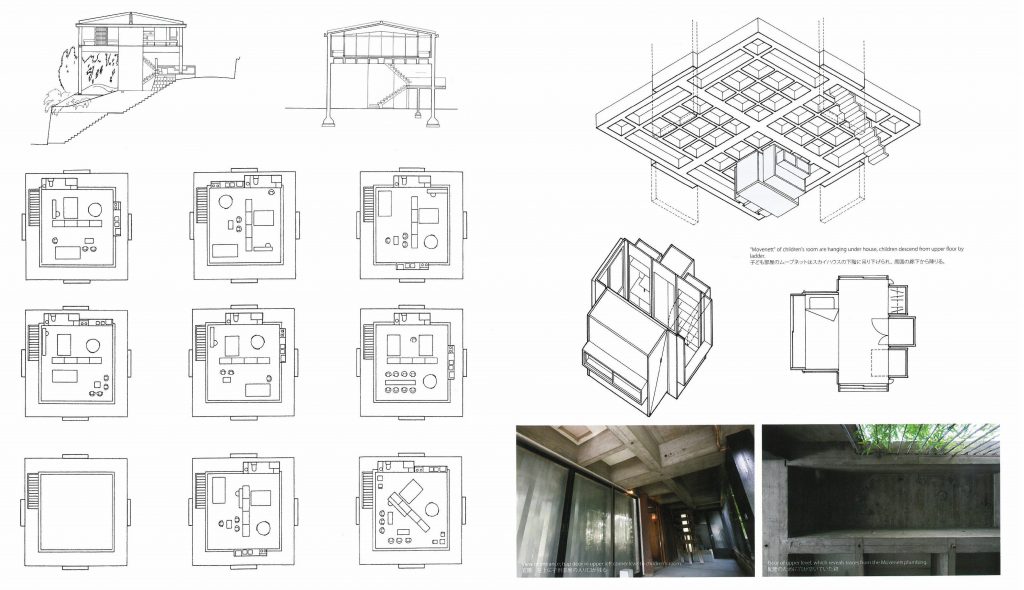 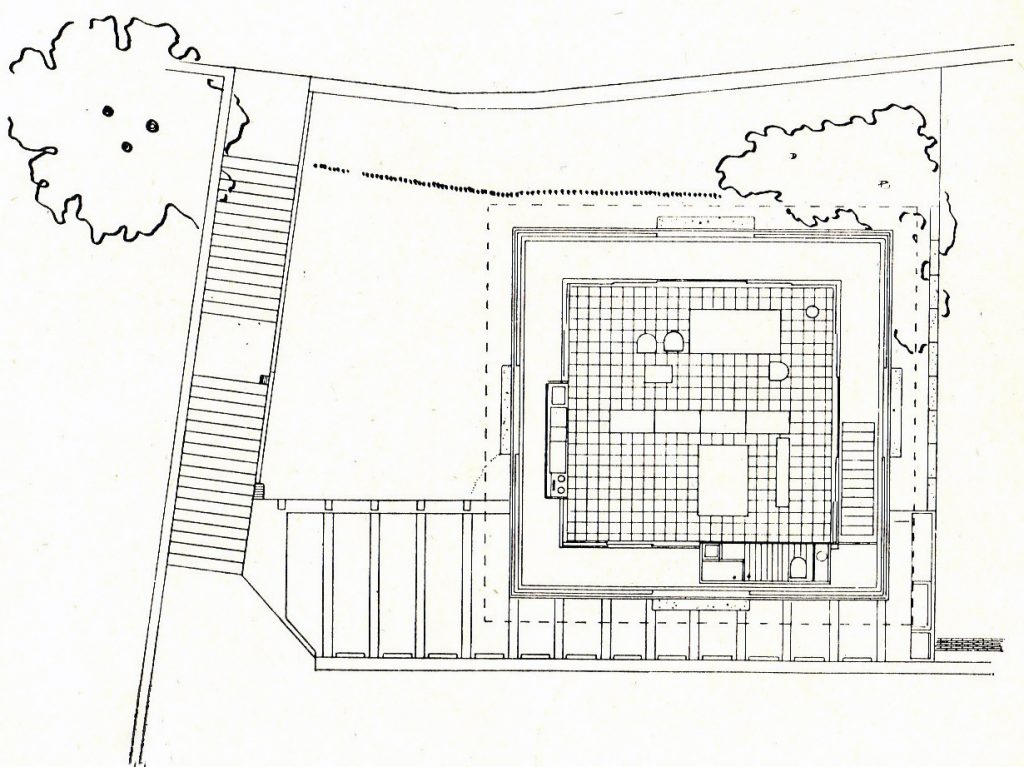 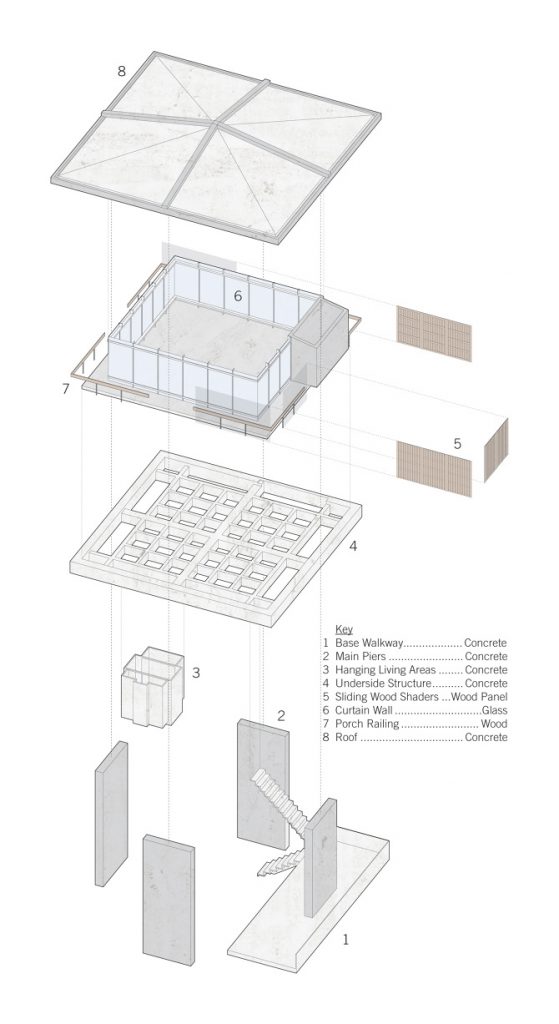 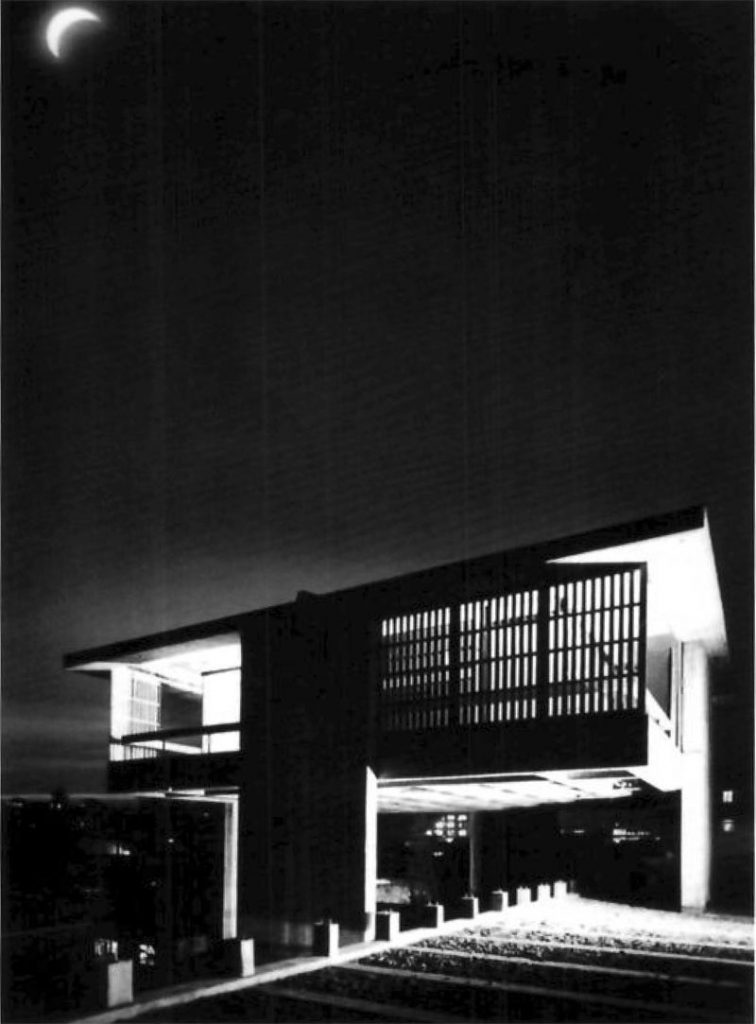 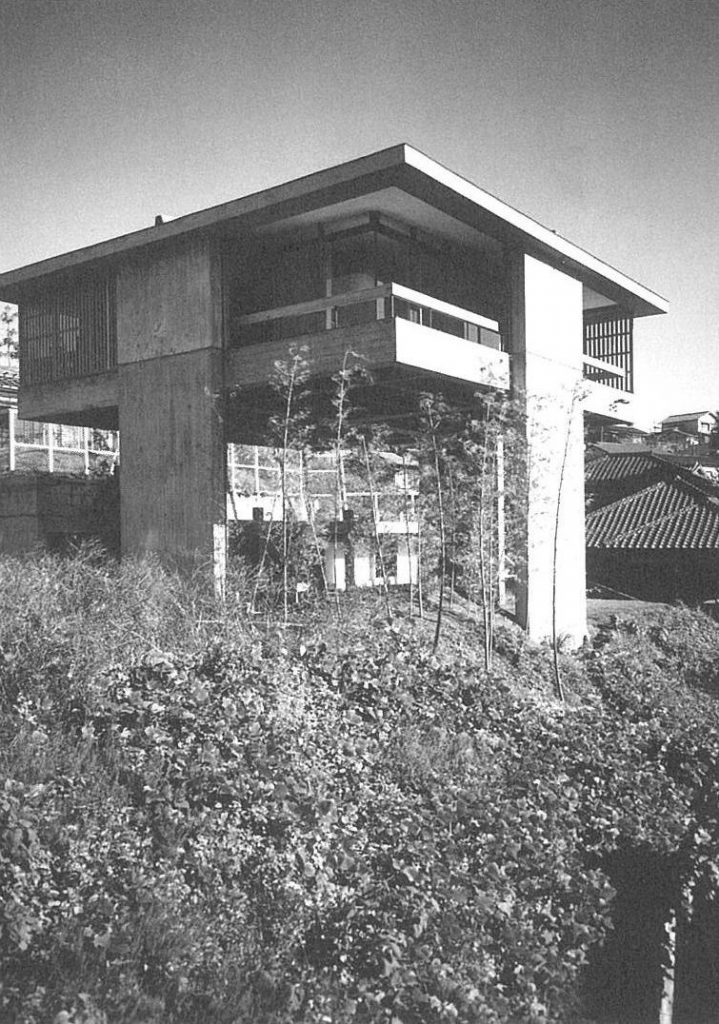 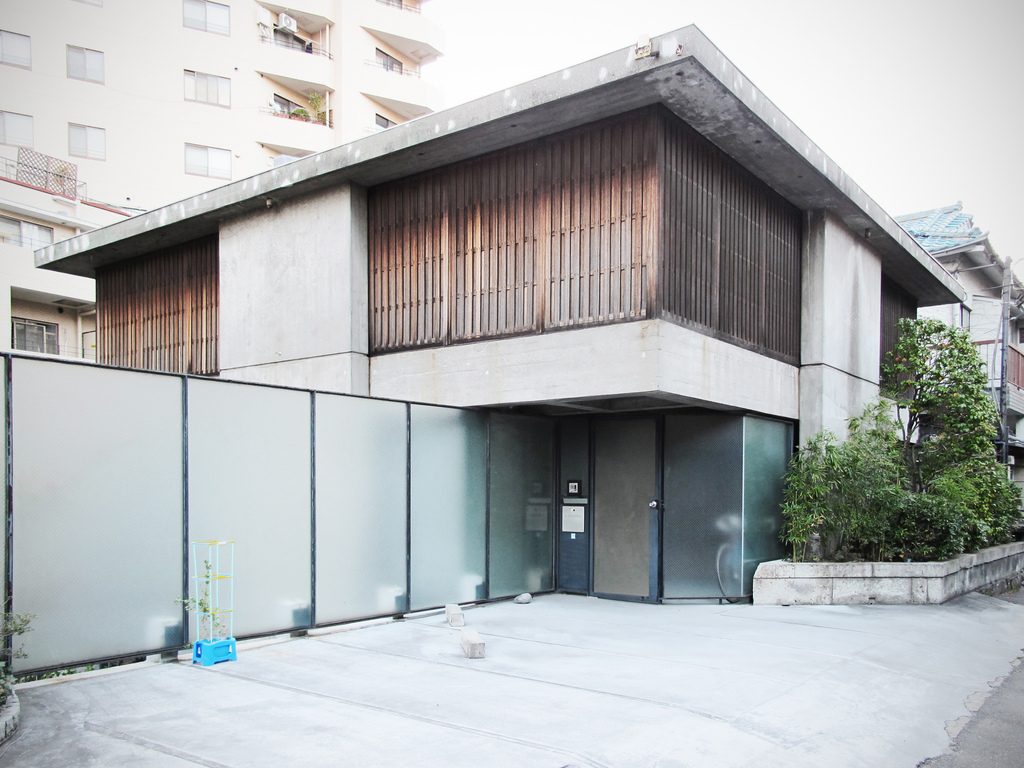 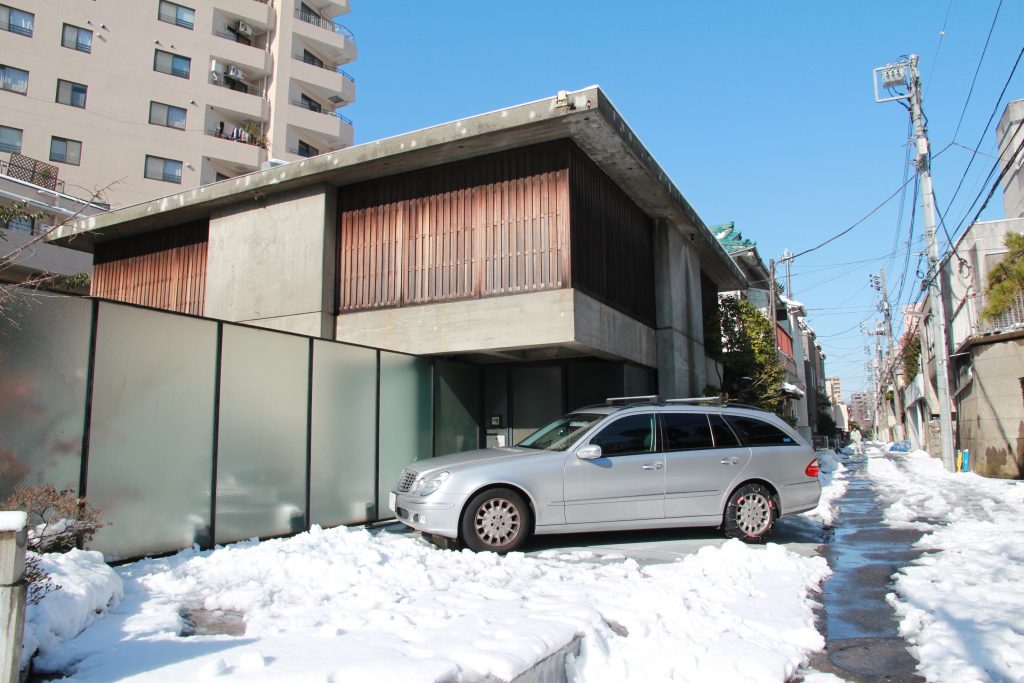