The labor colonies Falkenberg, Schillerpark, Britz, Carl Legiens Weiße Stadt and Siemensstadt built in Berlin between 1913 and 1934 were declared World Heritage UNESCO in 2008, considering the remarkable influence exerted on contemporary architecture and urbanism and what was at the time as a new type of social housing, which in contrast to the overcrowded and unsanitary typical tenements the time possessed airy rooms with plenty of light, spacious gardens and modern sanitary facilities. The diaphanous forms of modernism inspired the construction style of the twentieth century.

The Siemensstadt settlement arose between 1929-1931-1934, under the direction of architect Hans Scharoun and participated in its construction, Walter Gropius Hugo Haring, Bartning Otto, Fred and Paul Rudolf Henning Forbat who were part of a progressive group of young architects called Der Ring ” the Ring “, which is why the settlement was called ” Siemensstadt Ringsiedlung “.

The linear blocks, or ” Zeilenbau ” generally oriented in a north- south axis to maximize access to daylight, in parallel stripes, with green spaces between them and individual balconies. Within each of these parameters individually expressed architect in designing different blocks coexisting trends in modern German architecture of the time. Strictly orthogonal Gropius, Haring with curved balconies protruding from the walls lined with bricks and Scharoun Panzerkreuzer battleship reminiscent in its nautical theme and demonstrates the depth of the cuts on balconies, decks or roofs porthole windows.

The original settlement grew in the districts of Charlottenburg and the eastern part of Spandau, in Berlin , Germany , in the vicinity of the company Siemens. Originally the building was distributed along two main roads and three orthogonal axes : Geissierpfad, Jungfernheideweg Goebefstrasse and the first reinforced by the railroad overpass.
Due to the proximity of the production plants and the existence of railways, the company obtained permission to build a large-scale urbanization, for workers of Siemens, in a vacant lot.

The new group of architects was headed by the Minister of Urban Development Martin Wagner , who gave each of them the opportunity to pursue their own interpretation of the new social architecture in an environment urban.

Hans Scharoun , manager of urban master plan, developed the concept of a large estate, with many green areas, which became a model for housing construction after the World War II. The resort’s architecture swept the concept of single-family homes and personal gardens, offering multi-storey blocks with interesting details that set it apart from developments built later.

The way in which this colony was built marked a turning point in the thinking of urban construction, the point where the city of Berlin planned by Martin Wagner leaves the low-rise construction the project of the city and garden with individual green areas in favor of more dense apartment blocks with large public spaces.

Unlike other major public housing projects of the time, built under the patronage of the state cooperative GEHAG the Siemensstadt or City Siemens was built by a private cooperative as housing for workers at the nearby electrical products factory Siemens employing 60,000 workers

His buildings show little common details for the time, as the brick facade in beige, projected balconies with kidney shaped designed by architect Hugo Häring on Goebelstrasse or blocks with porthole windows and terraces on rooftops deliberately reminiscent naval architecture with protruding balconies in buildings designed by Scharoun on Jungfernheideweg Hansa.

Another feature of the settlement is the long curved building designed by Bartning that forms a protective barrier along the railway line.

The ring is also referred to as this development combines the advantages of the houses with a wide variety of expressive detail and design. The broad spectrum of architectural vocabularies suggests an association of individual personalities loosely knit instead of a true collective of designers and summarizes the various aspects and approaches adopted by the pioneers of the “architecture of the modern city.”

Hans Scharoun , who designed the urban plan of the project, grouped the buildings following the principle of ” neighborhood units “, a loosely related to the concept of ” outdoor living space ” term Taut . One of the main concerns of Scharoun was the preservation of a large central park. Unfortunately, this area was later lost due to the construction of a parking lot.

Scharoun emphasized in the community access to its entrance with two flanking buildings that create sharp angles to each other. They point to the railway underpass and create a link with the neighboring industrial area. The funnel -shaped space created between the two buildings included one of the two seats of the assembly, the second is located east of the road and Goebelplatz Geissierpfad, called Market Square.

The population of old trees was preserved, emphasizing the rural character of the place from the beginning. Despite its strict urban design, settlement appears architecturally diversified demonstrating the wide range of new architecture ranging from the cold functionalism Walter Gropius , strictly differentiated style in design Scharoun or organic variety in the designs of Hugo Haring

Most buildings are four (16 meters high) or five plants ( 28 meters high ), built in parallel rows from north to south and removed from the streets, with access to trails mediantes entries 2, 5 meters wide. The houses have flat roofs, landscaping and gardens. Striking primarily draft Hans Scharoun built as a warship, referring to the German armored cruiser Panzerkreuzer

In the streets and squares of the settlement he named them engineers, physicists and inventors whose work contributed to the success of Siemens AG ( Geißlerpfad, Goebelstrasse, Heckerdamm, Jungfernheideweg, Mäckeritzstraße ). In total Siemensstadt has 111.099 m2 of outdoor space.

Gropius projected located two blocks south, are elongated and of different length and frame corners Jungfernheideweg. These blocks are home housing 43, 55 and 69 m to the outside on both fronts. Gropius had in mind that access to the various rooms will be made through a corridor, thus avoiding passing environments. To the north the shortest block allows the construction of a staircase leading to the central space, a public park. He also designed a house in gallery in Goebelstrafée, which binds to the longer block.

On the facades, each merging two houses an optical windows, achieved through a blind baked brick cloth in violet color, which visually suggests a single unit is produced. These windows are articulated with balconies, recessed porches and attics.

Hugo Häring organization projects a block with the minimum of houses, two per floor. The blocks are arranged in parallel and departments, 59 square meters, have a dual east- west, with bedroom, kitchen, bathroom and dining room that extends to the terrace.

A trail connects each core ladder with the main shaft and through the public gardens.

The building “L Lamento” Otto Bartning provides continuous to the street, plain and drab facade, just as the canopies projecting detail. The south facade is determined by the pace of the balconies. The block follows the curved path of the street, on a narrow site between it and the rail, facing the open rows of Haring and consists of 25 homes

Forbat Fred brings a new style to the building Siemensstadt. The building built in 1933 is located on the eastern side of the road, street Goebel 2-10, continuing alignment Henning and Haring. With flat roofs and facades of homes of different sizes, have projected balconies and loggias visible from the outside. Its vertical structure is highlighted in the balconies with rows of exposed brick on the walls of separation and partly entries or baseboards downstairs.

The six blocks in row architect are between 283 and 293 Street Heckerdamm. The homes have large windows with balconies, terraces or galleries, except the last two rows on the west side, built between 1933-1934 that do not have these items. They have small gardens between the blocks and are near public park Jungfernheide. Facades that are similar to other buildings in the area, both arrangement of the balcony and in the use of brick on the facade.

Scharoun designed the blocks in the south, bordering the city, opening to it through its funnel -shaped arrangement, with access and connection to the main traffic artery. The five-story buildings, four homes and a service, have the clearance needed for good natural light and each core ladder access public gardens before reaching the street.

Despite the different approaches and styles of each of the participants in the project architects, saves the whole shared similarities in the use of building materials.

Non-structural interior walls are 8 cm thick brick or stone. The floors and balconies are made of steel reinforced concrete with thickness up to 27 cm and some concrete blocks. Over the years it was found that the coated steel will eventually corrode when in contact with wet mortar, as happened mainly with blocks designed by Hugo Häring had to be thoroughly repaired.

All facades are raised in a narrow brick base, mainly decorated with clay bricks and tiles. The shapes and designs of doors and windows are mostly in the horizontal axis of square shapes, round windows. 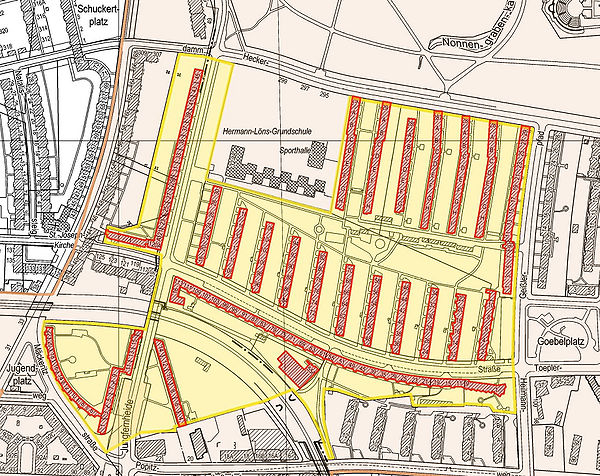 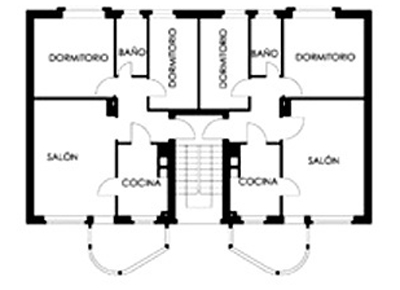 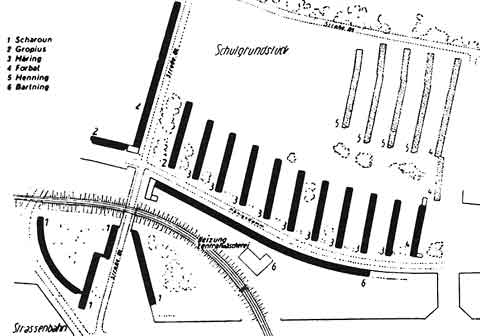 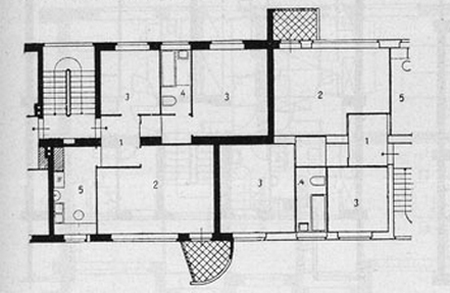 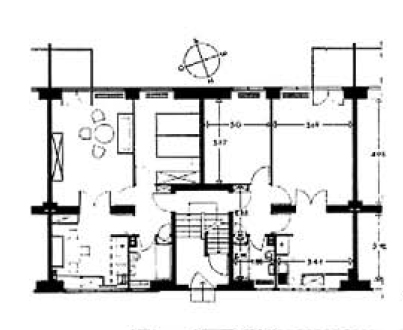 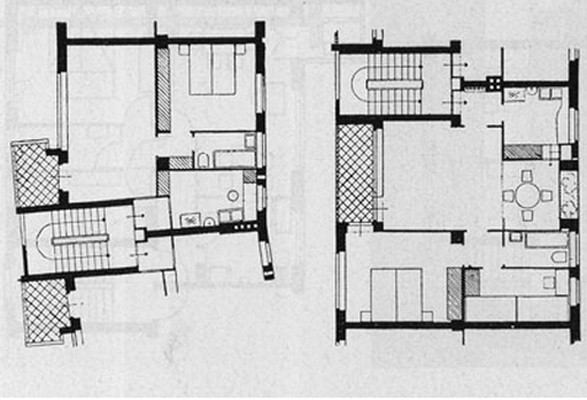 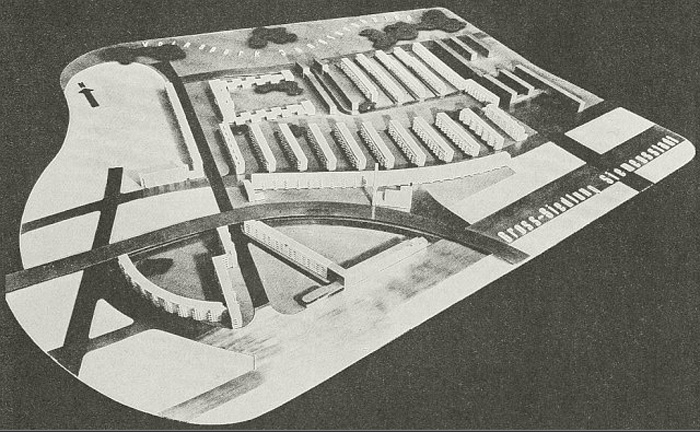 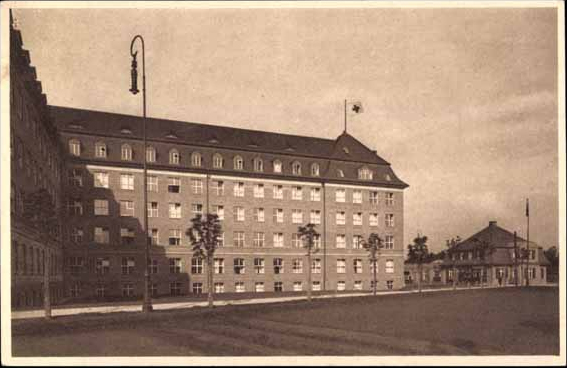 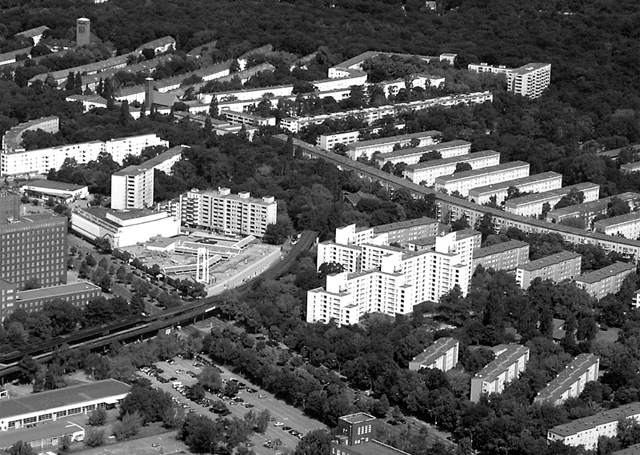 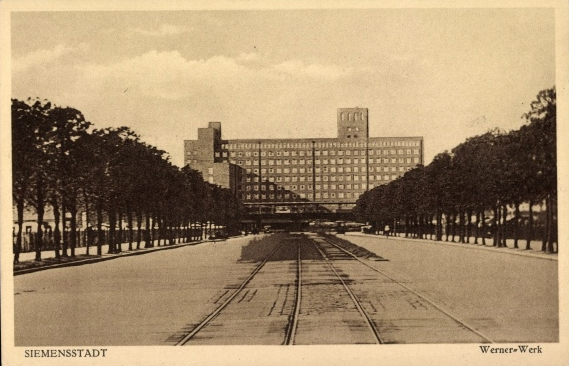 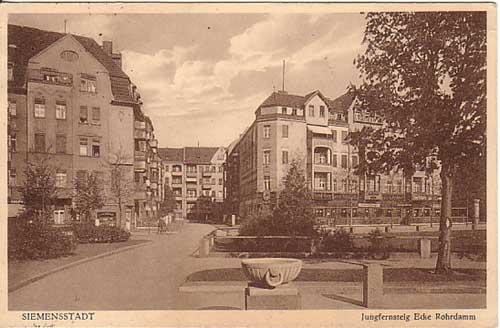 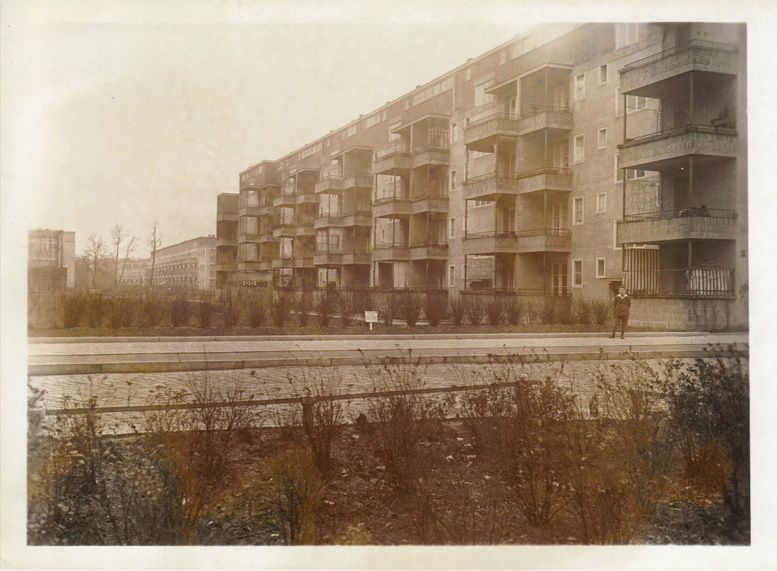 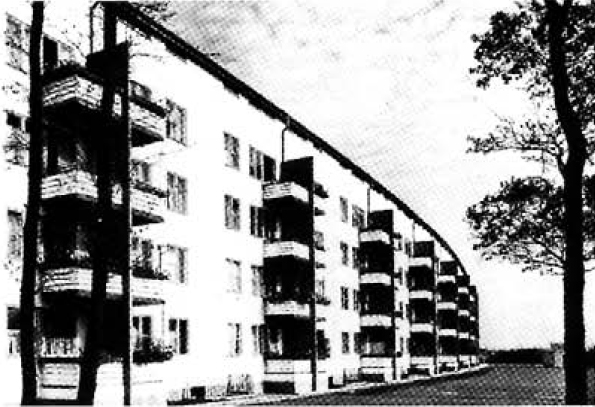 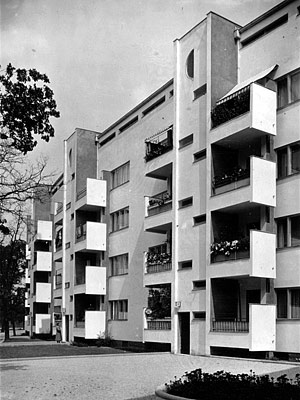 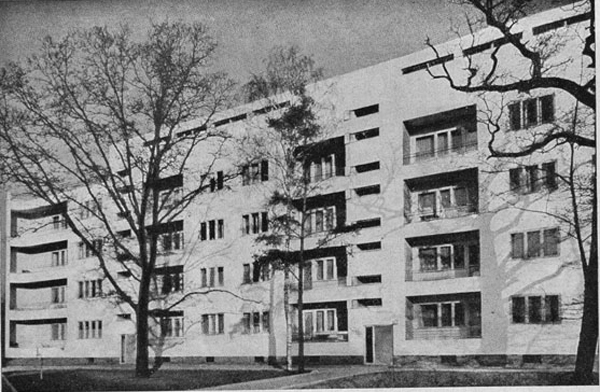 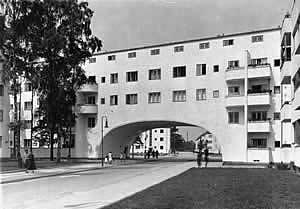 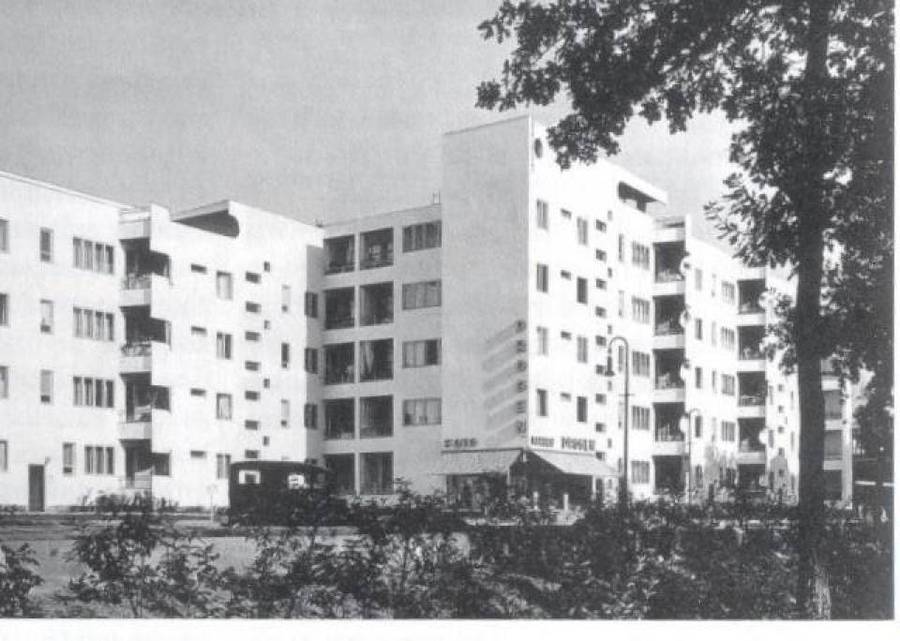 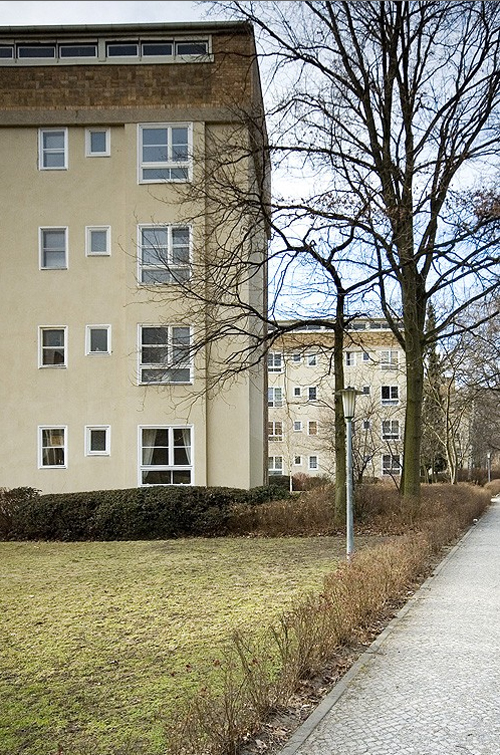 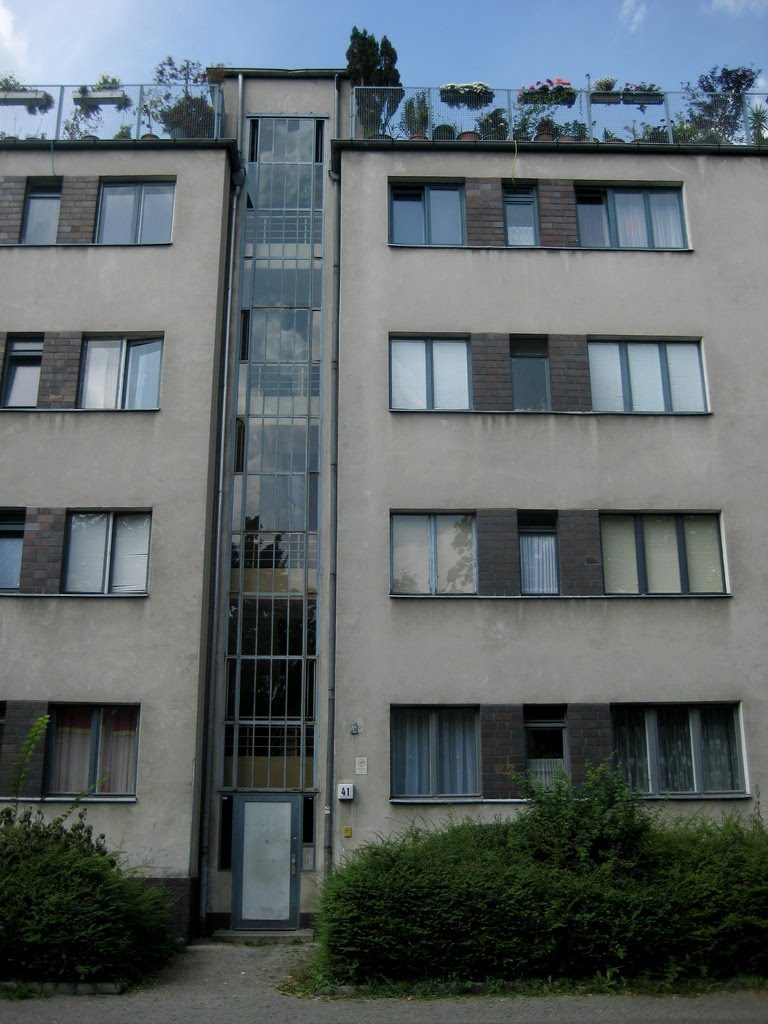 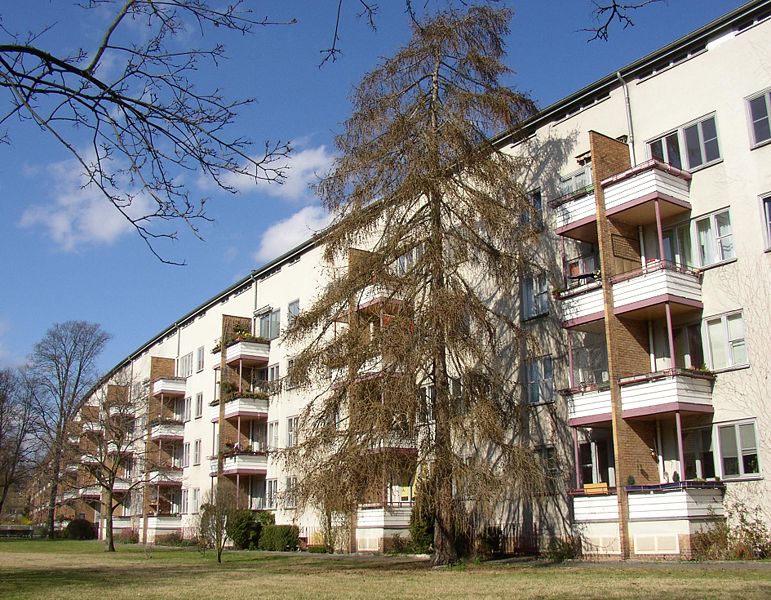 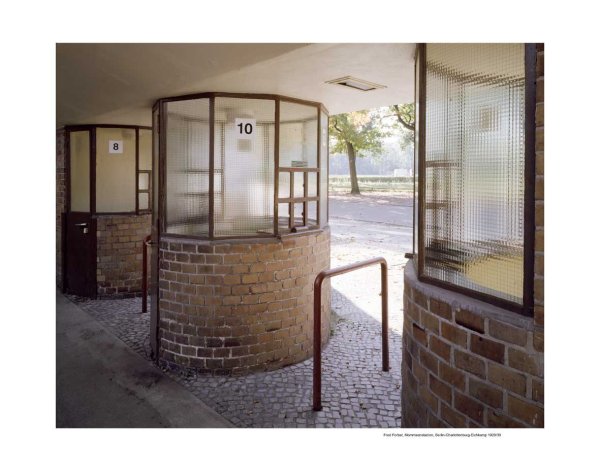 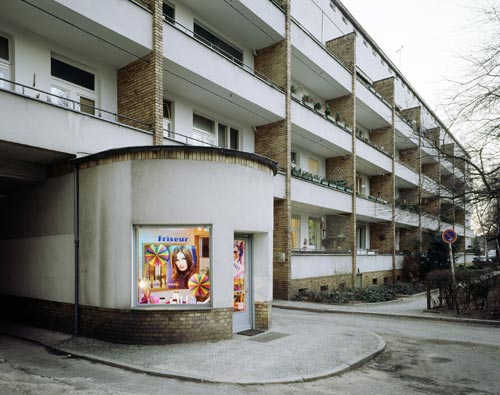 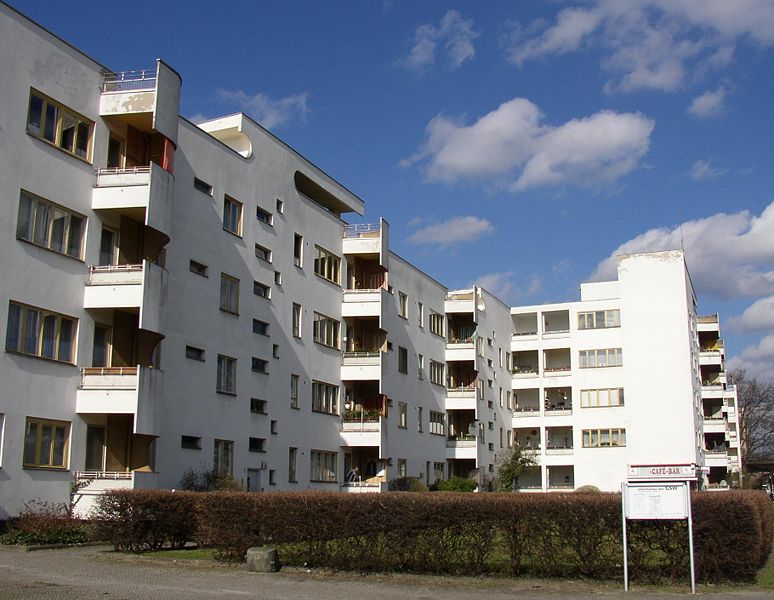 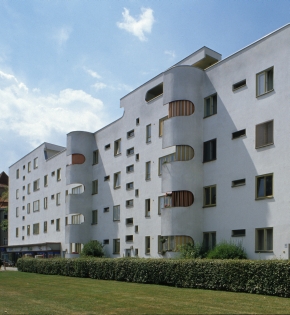 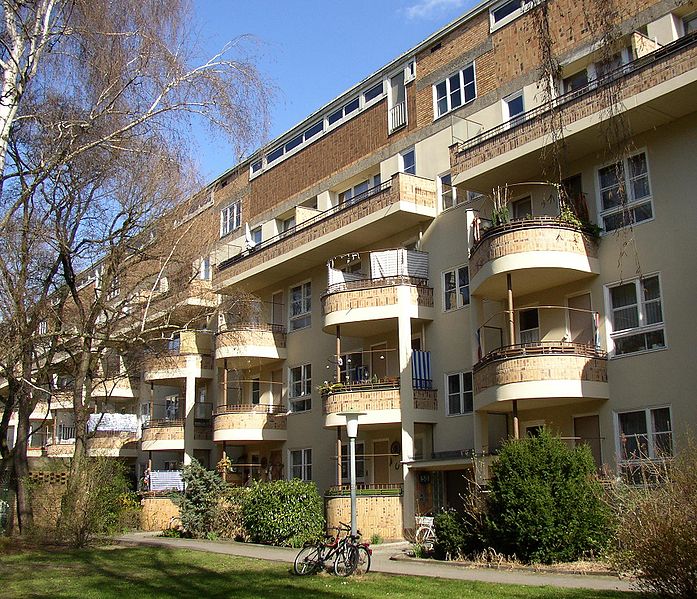 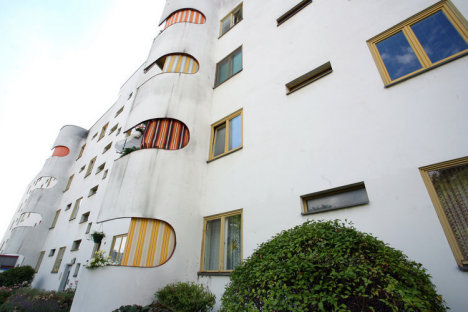 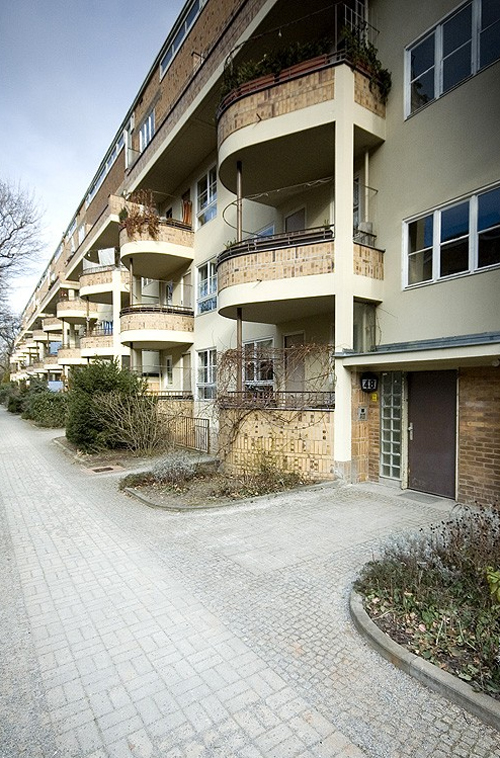 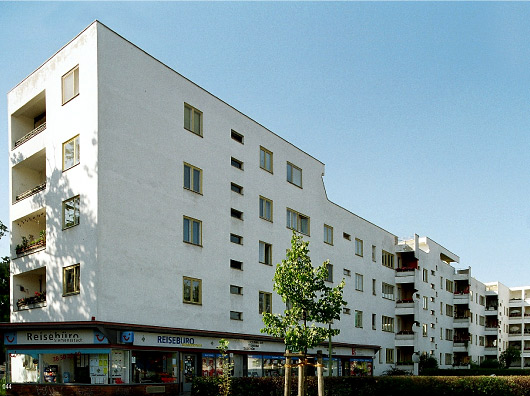 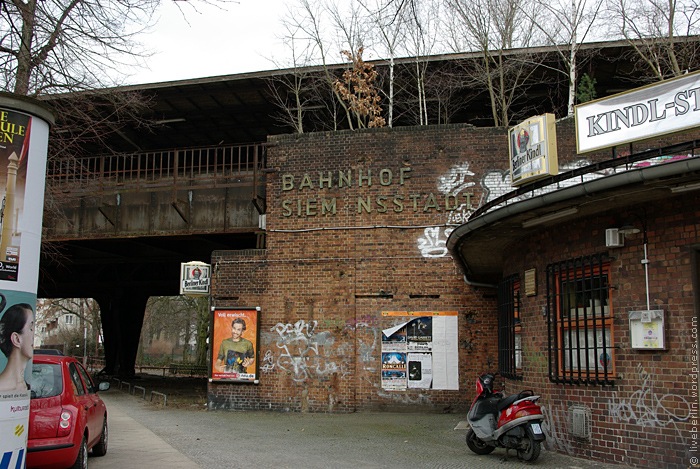 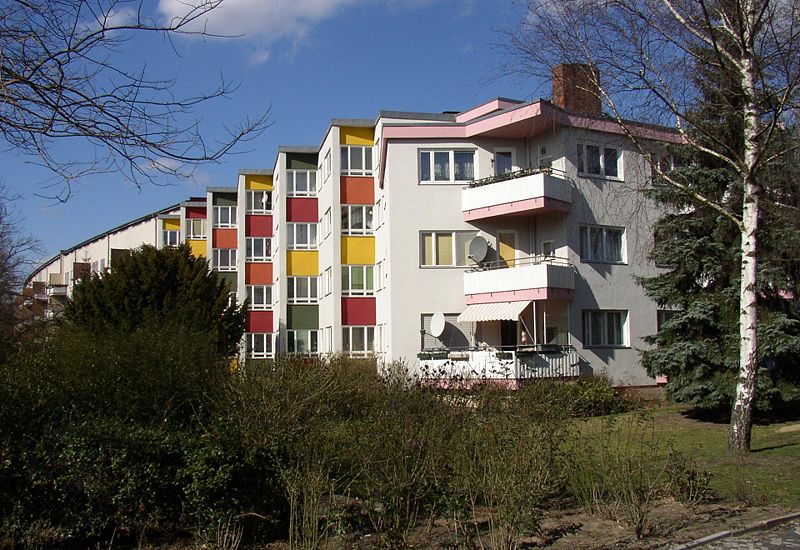