John Lautner designed this house in 1963 to Paul and Helen Sheats who along with their five children were able to enjoy it for a few years. When the millionaire James F.Goldstein bought, many years later (1981) was very poor, not the previous owners kept in good condition and Goldstein asked the architect himself remodel and enlarge.

Lautner began remodeling in 1989 had fulfilled most of the provisions, but you were still adding details and even when Lautner died in 1994 and was continued by Duncan Nicholson that from the beginning worked with the architect.

Like many of the houses Lautner, Residence Sheats Goldstein attracted the attention of Hollywood producers, appearing in numerous TV series “Charlie’s Angels” films like The Big Lobowski.

Over the years numerous modifications and has become an architectural landmark, with its spectacular glass lookout over the city of Los Angeles.

The building was designed from the inside to the outside, a home-cave that opens to embrace nature and view. The house is an example of organic architecture that derives its form as an extension of the natural environment and the person for whom it was built. A fixture in the work of Lautner, the project is approached from an idea and a unique structure that is going resolving the challenges of the site.

Sheats Goldstein House is one of the best known examples of the work of John Lautner. Not only designed the house, also the interiors, windows, lighting, rugs, furniture and all its services operating. Each enhances the home furniture and is completely related to the aesthetics and forms depending on the set. Even in interior design, she liked to mix Lautner geometric elements, such as tables, with more organic soils as pebbles.

Like the House floor Schaffer has shaped hourglass, the spatial movement determines fireplace and entrance is in the middle. Lautner said he designed the house from the inside out, purposely avoiding façade design.

The space was distributed in 5 bedrooms, 4 bathrooms and a living room completely open to the terrace, protected only by a forced air curtain that extends inside to the outdoors, blurring the line between interior and exterior. 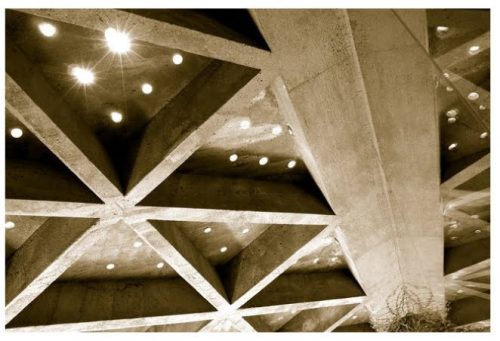 The stately coffered ceiling of the room, reminiscent of the Yale University of Louis Kahn, is crossed by 750 small skylights covered with transparent lids filled with water to which a few motors are operated as “mini tubs”, distilling the sunlight into small patterns within the room beneath.

Advantage of the mild weather that southern California provides most of the year, outdoor covered walkways leading to the guest bedrooms and the master bedroom which opened windows that showed lower pool. This unique feature allowed Helen Sheats observe their children while working in his studio.

The house used for cooling cross ventilation, no air conditioning. The floors are radiant slab with copper tubes also run to the pool to heat the water.

The original building is poured in place concrete, steel and wood.

The remodeling, once the house was bought by James Goldstein, was carried out in stages to allow could be inhabited during construction.

Access roads to housing leading to a triangular plane, which is the whole house, in the entry and dining room, the trip also leads to the main hall and from there down to the lower level which houses the master bedroom. A triangular concrete wall near the garage, marking the beginning of the entryway to the house, there is no real door that encloses the interior space, the same entry hall is not really closed, are the plants that cover the top and once the marquee goes around a corner and opens to an open pond.

This is part of a concrete platform located between the top of the hill and the path to the master bedroom, sandwiched between the pond and pool entry trapezoidal front. From the slope, the surface moves into the vacuum through the glass, housing the pool and extends to the limit that prevents the rail triangular in favor of the views.

All stucco ceilings were replaced with redwood red tones, steel studs were replaced with frameless glass. The glass wall, no frame, is the only structure that separates the living room inside the deck and pool. In the room the fireplace indicates the start of the paneled roof that covers the front of it, part of the pool and the landscape framed by a triangle.

During the day inside the concrete cover is dotted with light rays, creating the effect of sunshine through the trees in the jungle garden. This effect is achieved with small skylights glass 750 inserted in the concrete cover. 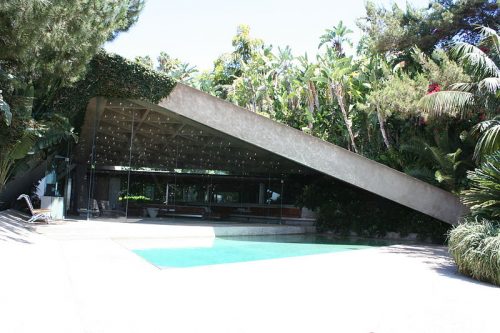 In the mid-90s was installed aircraft panel screen and television, the first of its kind and almost all the furniture were added subsequently performed in situ with concrete and stainless steel.

By contrast to the minimalist feel of the room or the clear water surface, the robust concrete cover highlighted with a thick border. From the architectural point of view this robustness and angular geometry represents a natural characteristic of a forest or jungle fertile hill on which supports one side.

The kitchen was remodeled with wet sand detail and cabinets were replaced with stainless steel parts combined with an African wood called “bubinga”.

Induction burners cooking were the first of its kind. In the kitchen stood a glass table supported by two concrete pedestals. All switches were replaced with stainless steel buttons and custom electronic control systems.

Skylights in the kitchen, dining room and guest bathroom were completely open to be operable to heaven are opened by pressing a switch. The skylight in the kitchen, as well as dining, type glass plate in two corners of a concrete block, helping to prevent the scattering effect of outward space that exists in every room of the house.

During the remodeling process in 1989, Goldstein hired landscape designer Eric Nagelmann to create a lush tropical vegetation inspired Bali or Tahiti. Large palm trees were planted to provide shade and an irrigation system is able to create a microclimate in dry tropical climate of Beverly Hills. The surprising result combines extremely well with the design of Lautner. Stone steps were added in the driveway to the house.
The hallways and outside decks no railing, a detail that Lautner wanted to remember the fine line between where the house ends and nature begins. In fact, the architect removed the limits just to allow people to experiment with their own limits.

With the remodeling in the house were placed over 5,000 hidden LED along with incandescent lights.

Goldstein commissioned and installed at the bottom of your property a work of art by the artist James Turrell light. Installation on a concrete structure below the main residence known as “Skyspace” or “Sky Box” and was described by the London Telegraph as “a high-tech lair for a Bond villain”

The bedrooms are located on the back of the house, concealed by the play of perspectives of a triangle back to the dining room. The outdoor corridor that leads to the master bedroom is a surprising mixture of concrete, wood and vegetation native to Africa

The master bedroom, on the lower level, underwent extensive remodeling. This is a concrete room with a glazed from floor to ceiling to form a diagonal axis and offering some wonderful views. This amazing corner sliding glass walls, leaving an opening of 3.66 meters in diameter that opens outdoors without railings or any other protection