Sharpe Centre for Design-Ontario College of Art and Design

Sharpe Centre for Design is part of the Ontario College of Art and Design renovation. It was performedby English architect Will Alsop and the study based in Toronto, Robbie/Young + Wright Architects. The center is called like benefactors Rosalie and Isadore Sharp.

In addition to expanding 7.440m2 the school, the project honors the activity taking place inside, with numerous criticisms for and against in the architectural and design environment. Volume, a single rectangular structure 25.91m high above the ground, resting on twelve columns of steel, has quickly become one of the most exciting architectural landmarks of Toronto.

The OCAD is located above the main and oldest building in the Ontario College of Art & Design Campus, surrounded by Grange Park on the west side and McCaul Street in the east, in the heart of Toronto province of Ontario, east of Canada.

Because the Sharp Centre is located above the main and highest campus building, under OCAD was created an outdoor plaza, a connection between Grange Park and the neighborhood, through McCaul Street.

The bottom exterior of the Sharp Design Center rises 9 floors soil, unifying the existing Victorian style brick structures under. The justification to start building plants over 25.90m soil was preserve views of Grange Park through McCaul Street for OCAD neighbors. 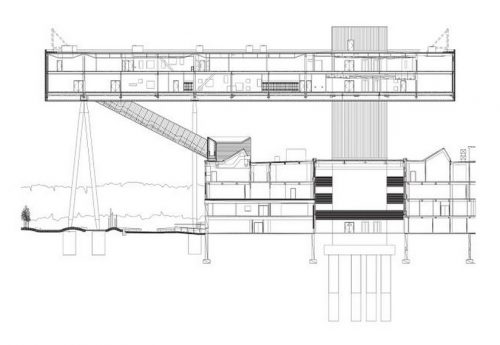 Besides apparently suspended in the sky, it is a very conventional structure, essentially a box, with an efficient use of space for classrooms, studios, offices and workplace for students.

The vacuum created under the building provides expansion space for outdoor activities of the university, a garden area that is an extension of Grange Park. “… An element in the urban scenario maintains itself with hard civility, while allowing a new public open space below… ” Alsop Architects

Inside the two-story building, houses art studios, spaces for teaching, meeting rooms, exhibition spaces and faculty offices. The central space of the whole is formed by the new entrance hall with four plants that has been generated in the core lifts and through a glass facade full height and another Great Hall with three plants in level 2 where students and artists can exhibit their works and which in turn serves as a link to all the volumes in the Design Center. This space is also used for various events, a gallery, auditorium, cafeteria and adjacent conference room. 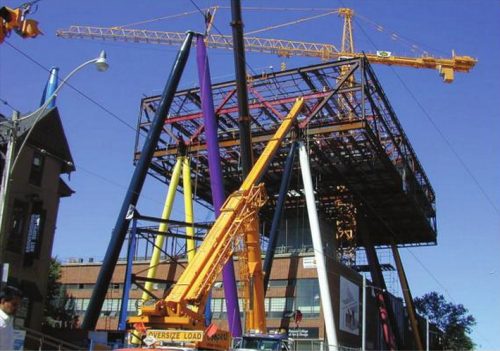 The large steel box truss that forms the remarkable superstructure ‘table top’, with the shape of a parallelepiped 9m high, 31m wide and 84m long, is 26 meters above the ground. The tabletop is supported in a conventional concrete staircase, the elevator core and six pairs of legs formed by tapered steel columns, about 26m high, touching the ground in a seemingly random manner.

Each of the six pairs of legs lies on three concrete boxes, each 2.44 m in diameter, together with reinforced steel below to absorb and prevent shifting or lateral movement transferred from the building to the base.

The center sits on a foundation consisting of twelve concrete blocks, steel reinforced 1.52 m in diameter, sinking between 12.19my 18.29m in the bedrock far also reach 12 feet long, hollow steel 26m long, longer than the upper structure, with a cone at each end of 2.5m. The structure has two floors and is connected to the existing installation beneath by a core of elevators and escalators that are the central focus of the new entrance hall, linking the two halves of the existing university buildings, at all levels.

For the exterior coating system a sum frame cold-rolled steel between the structural reinforcement elements was installed. The location of the window glazing panels should be coordinated with the structure and placement of the diagonals. Before the enclosure is sprayed with flame retardants all the hidden parts of the steel structural system.

All steel legs are the same size, seven painted in various colors and five in black to make them look thinner, even more persuasive illusion night when they become less visible and seem to disappear. The architects wanted the building to have a completely different night appearance.

The steel pipe bright red, wider than the other, connecting the new building with the existing brick is used as an emergency exit. 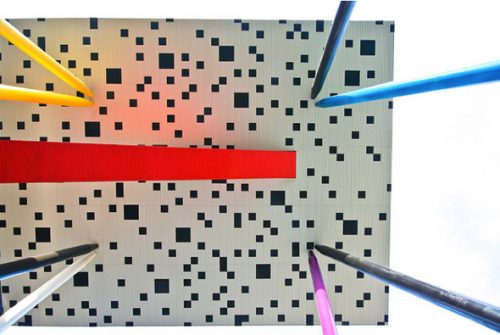 The tubes used as “support legs” for box building were originally manufactured in Pennsylvania as segments for a pipeline natural gas. They are steel with a wall of about 2.54 cm thick and weighing 8,165 kilos each. Like all exposed steel in the Sharp Center, these tubes are coated with many layers of intumescent paint, flame retardant material that swells when exposed to intense heat, increasing the volume and decreasing the density to provide a protective cushion around each leg.

As a cost-saving measure, which was meant to be a colorful translucent coating is a skin of corrugated aluminum painted black and white to get a pixelated appearance, visual effect intended to blur the scale of the building and affect how it is perceived.

The bottom of the Sharp Center is lighted by 16 large metal halide bulbs with blue lamps remain lit from dusk until midnight. Twelve of these lights are mounted on the ceiling, at number 100 McCaul St and the other four on the same street at number 74.

The lighting not only enhances the building, it is an intrinsic part of the original design plan conceived by the architects to transform the character of the building between day and night. “… Like the coating pixelated blurs the scale and the perception of the building, the lighting changes the way people perceive…. We wanted the Sharp Centre was a thing during the day and during the night it had an aspect totally different… ” said the architect Will Alsop.