The Shamberg house, also known as the Stuart and Paula R. Shamberg House or the house in Mount Kiosk is part of the so-called white villas, a number of houses white to resemble each other, where color and clear influence Le Corbusier are a hallmark of the architect.
The premise of this house falls into a typical outline of the author, which also respond homes as the Smith House or Douglas House, works that are also part of this first period of Richard Meier.

The house was sold in 1989 to Geoffrey P. and Susan Wharton who made significant changes, expanding the original construction and the communication with the adjacent building. When the estate was first built, only took up half the space around the field 26.304.60m2, however, was expanded later when the house a swimming pool, some additional recreational areas and private rooms was built in Instead of the social areas. The volume designed by Meier, 250m2, has been preserved almost intact, except for a new stone floor and the addition of central air conditioning.

In 2014 the estate was sold to Normarty Associates LLC, a law firm representing the true owner.

The house is located on a high, forested terrain, offering an incomparable view on the lower parts of the slope, at 46 Old Roaring Brook Road, Mount Kisco, Chappaqua, Westchester County pertaining to the state of New York, United States.

Shamberg house is situated near a traditional shingle house that served as guest house, while the new building served as a meeting place for the family. It was built between the existing pool and the highway.

The volumetric approach is a set of additions and subtractions, with rationalist forms, where the purity of the volumes with transparency makes the whole a sobering result.
As in previous designs of houses Meier, the formal potential of a decisive separation between public and private spaces is scanned again, but with some significant changes. The rooms and hallways stacked vertically, facing a living room oriented horizontally with 180º views over the landscape, physically define the private sector. On the ground, the input sequence and private spaces, the bridge, master bedroom, terrace and aisle are oriented towards the diagonal. The front entrance is seen obliquely from the bridge; the sleeping area cantilever is viewed from the top of the spiral staircase, through the double height inside.

It is a cubic box containing a rear rectangular strip that houses the intimate and service areas, with murario treatment in which the full on empty predominate, and a much freer spatial configuration on the front containing social areas and reception with a fully glazed front enclosing a space double, and sometimes triple, height.

In turn, the cubic box is the dominant element of the composition, on which successive operations of addition and subtraction are performed. The social area and intimate areas are distinct.

On the input side, a bridge at the level of the middle floor emphasizes the tension of the solid front. On the input shaft with a balcony that opens to a living room with double height with a prominent fireplace and a large window that allows a deep view of the forest below the house appears. Since this transition space you can appreciate the contrast between public and private areas of the house: an articulate and strong, the other like a vacuum. The balcony overlooks a winding staircase that goes down to the lower level. Last curving once one of the structural columns as to avoid a collision, the staircase discreetly intertwined the two space areas.

“… The Shamberg House offers a volume of public open space and glass, as intended…. to complement a deep walled private area. Because this was planned only for two, the space has a simpler structure than previous houses … “(Richard Meier Richard Meier, Architect New York:.. Oxford University Press, 1976.

To the right of the balcony, the level of entry-level circulation continues along a corridor serving the spaces behind the front facade to an internal bridge that leads to the bedroom of the owners, an open platform cantilevered over the space of the living room.

The movement through the bedroom culminates in an outdoor balcony, read as a solid curved space and pushed out through the glass wall, which seems to put balance on the curved glass wall. An exterior staircase gives direct access to the outdoor pool.

The reinforced concrete allows use of large glass panels, separating the enclosure structure. These two materials are the basis for construction.

Shamberg House also accessed from the rear by a ramp up to the first floor, and descend from it to the ground through an exterior staircase. The ramp is an element of addition, while the ladder is contained within the primary volume, which has been drilled to showing by transparency, in a typical process by subtraction. The relative simplicity of this pose is in Shamberg House crossed by an architectural gesture remarkable synthesis which strongly qualifies the interior space and the envelope of this work.

This is the environment which, linked by a slender thread circulation the bedrooms on the first floor, through bypassing the double height social area to pierce the skin and breaking glass exterior finishing in a graceful curve of pure rationalist lineage. A curved staircase that descends from the circulation of the first floor to the ground floor completes the delicate game of additions and subtractions that articulates both the interior space and the sober volume of this work.

Straight and front corners, however, determine the views and approaches the lowest public spaces. The uprights of the rear moving beyond structural columns, one difference with previous homes. This change, along with the opposed upper and lower levels grid, creates a sense of rotation within the well drawn house box avoiding collisions between the structure and the surface. 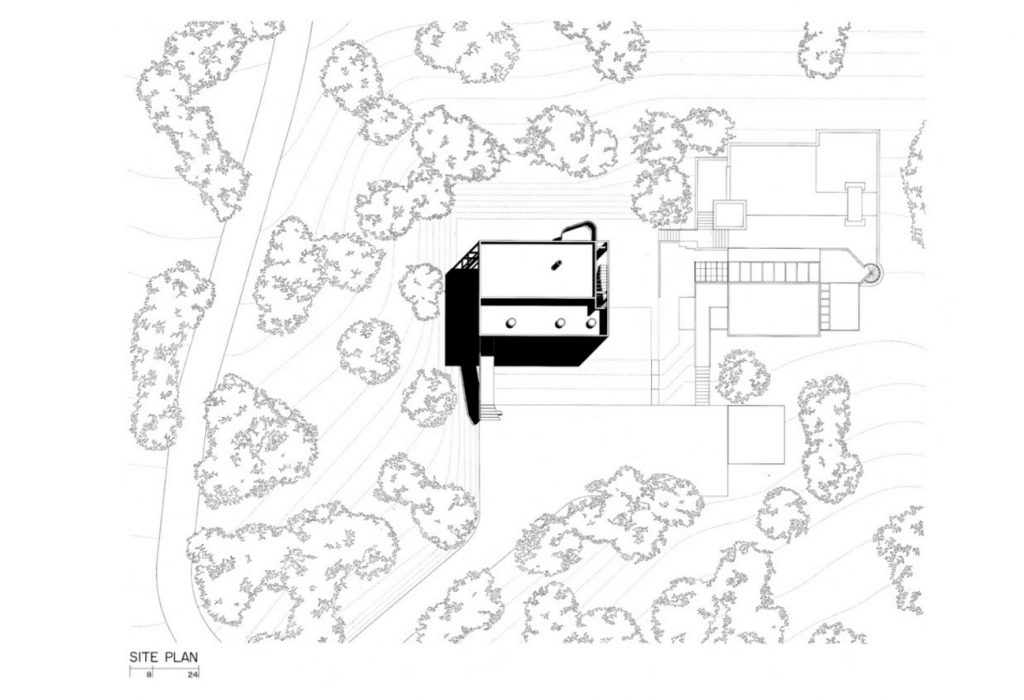 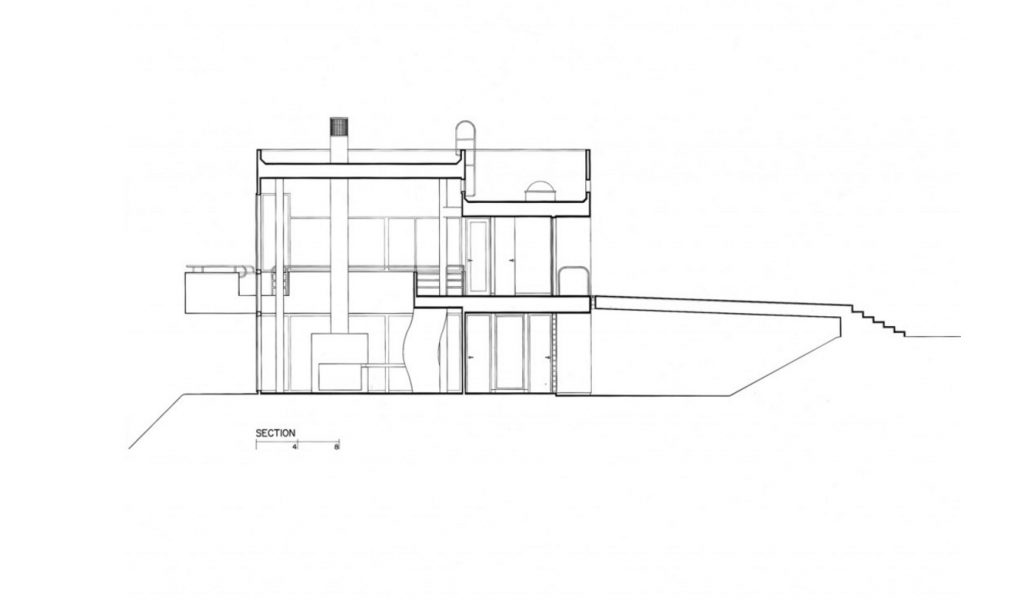 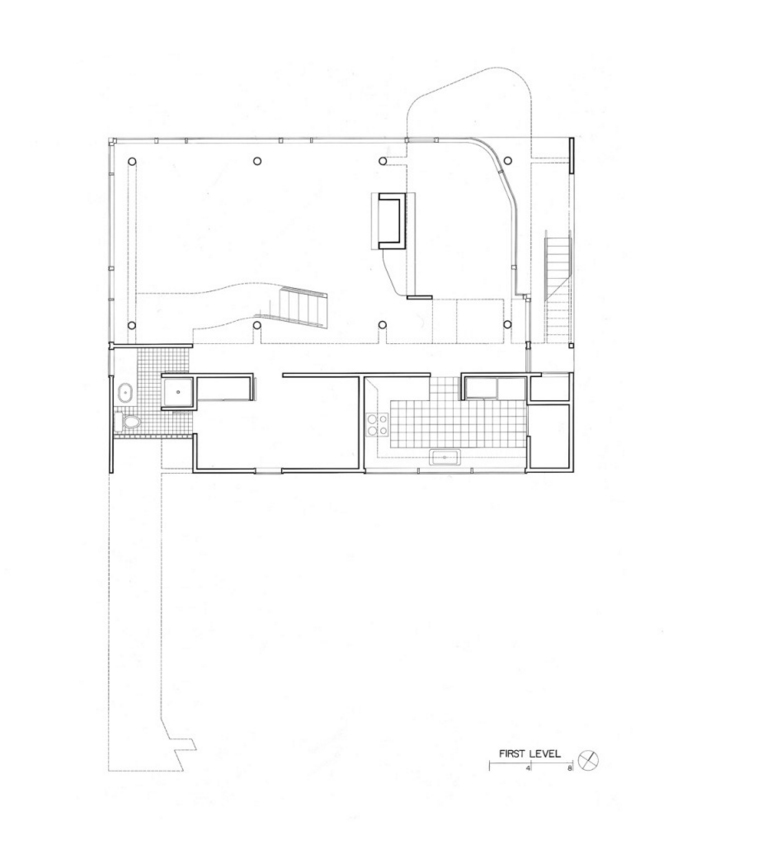 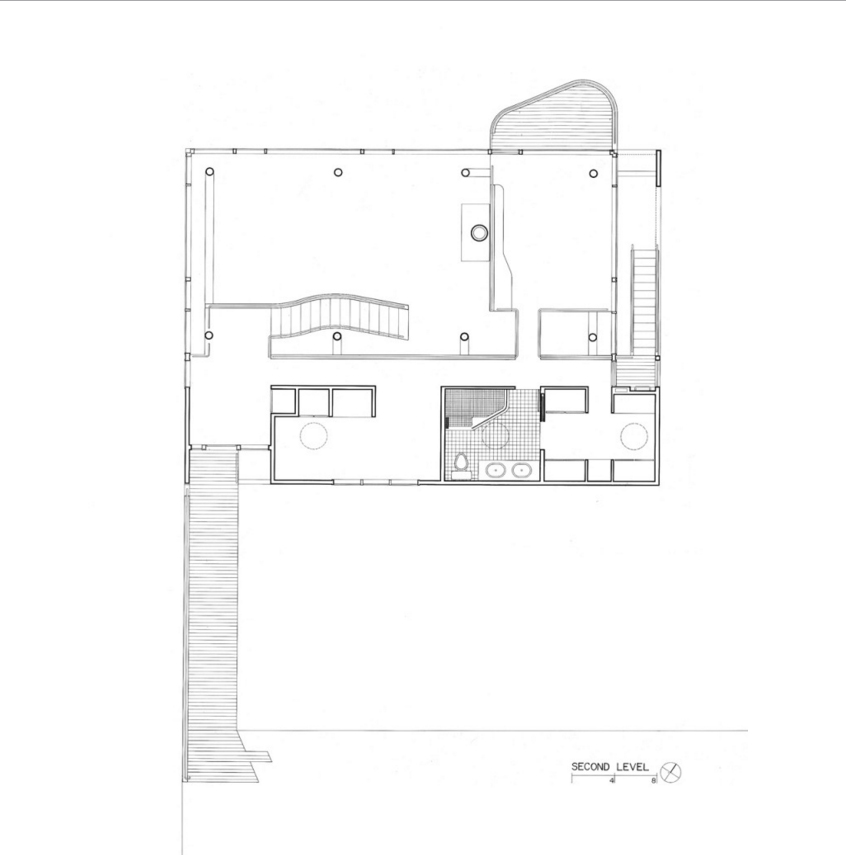 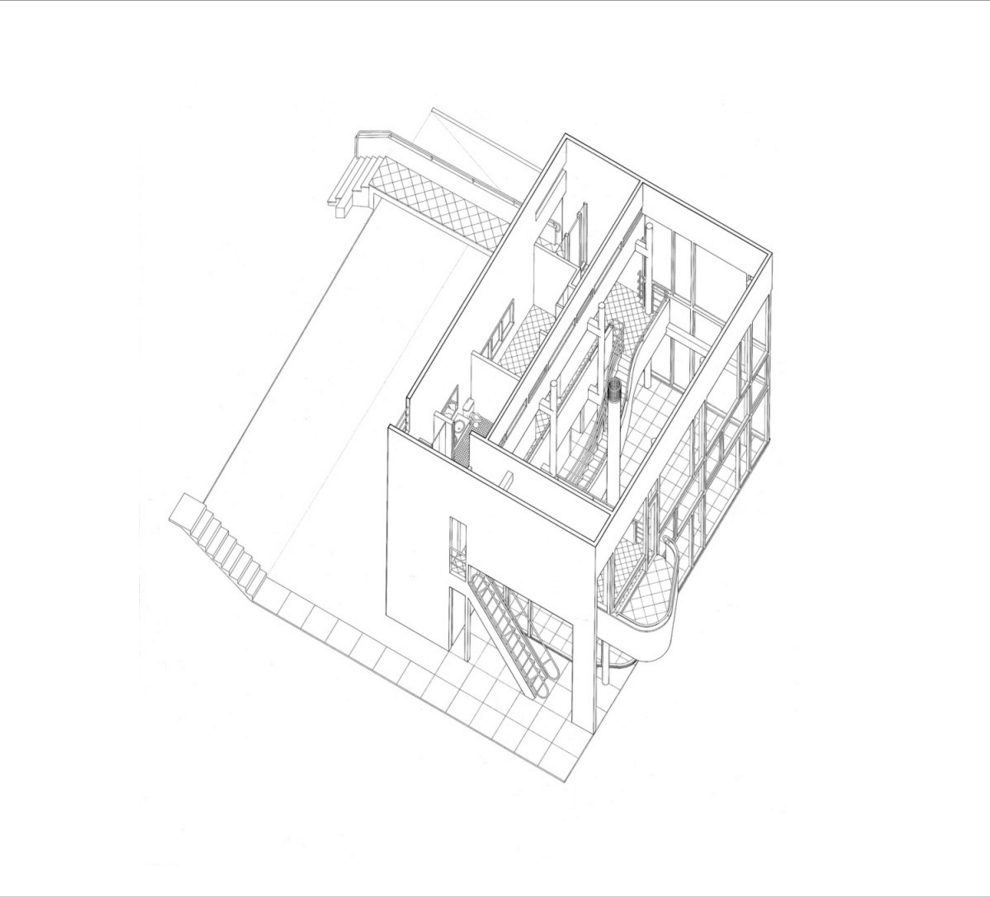 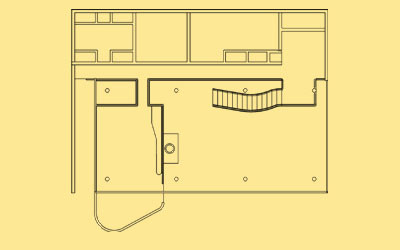 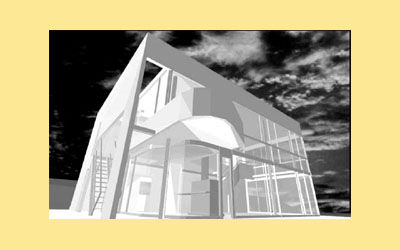 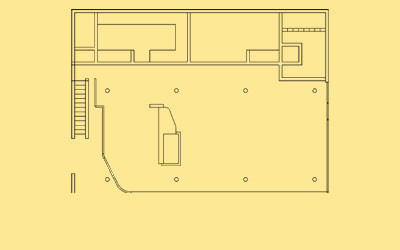 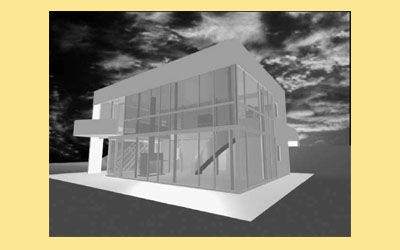 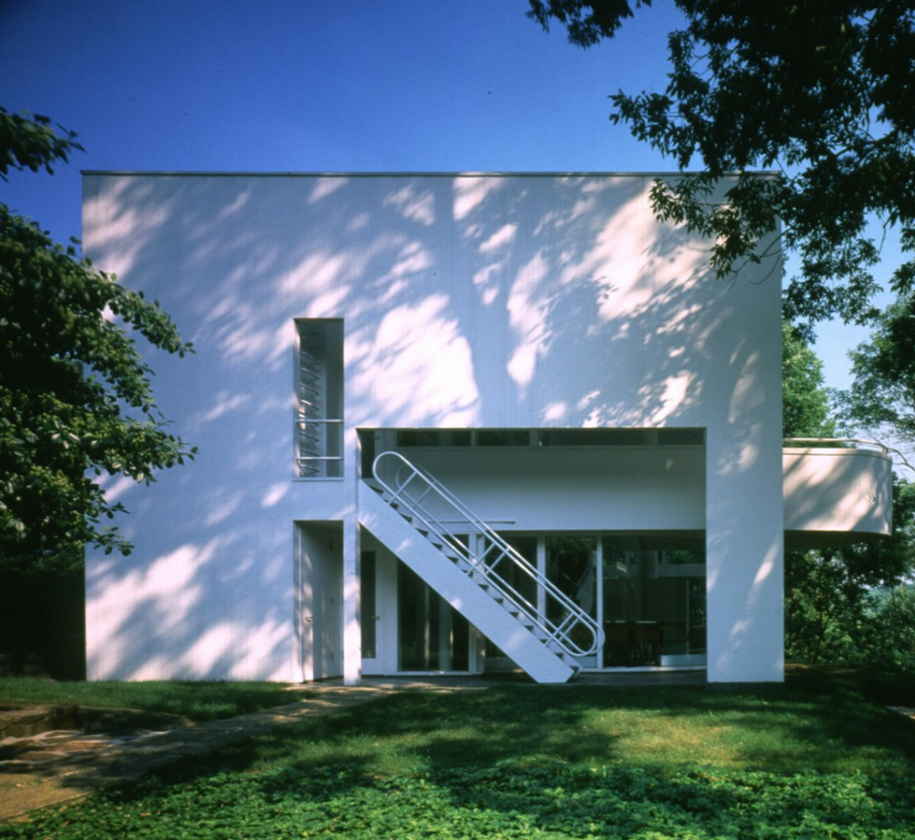 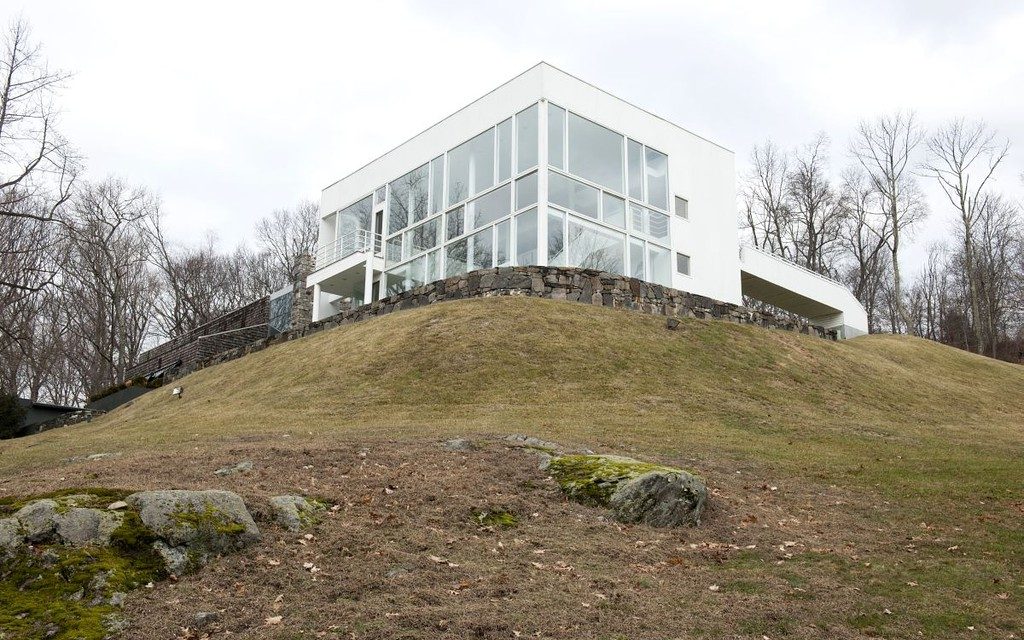 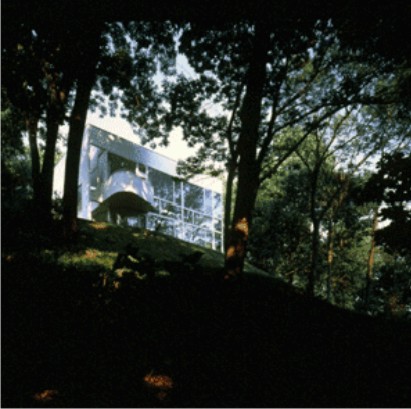 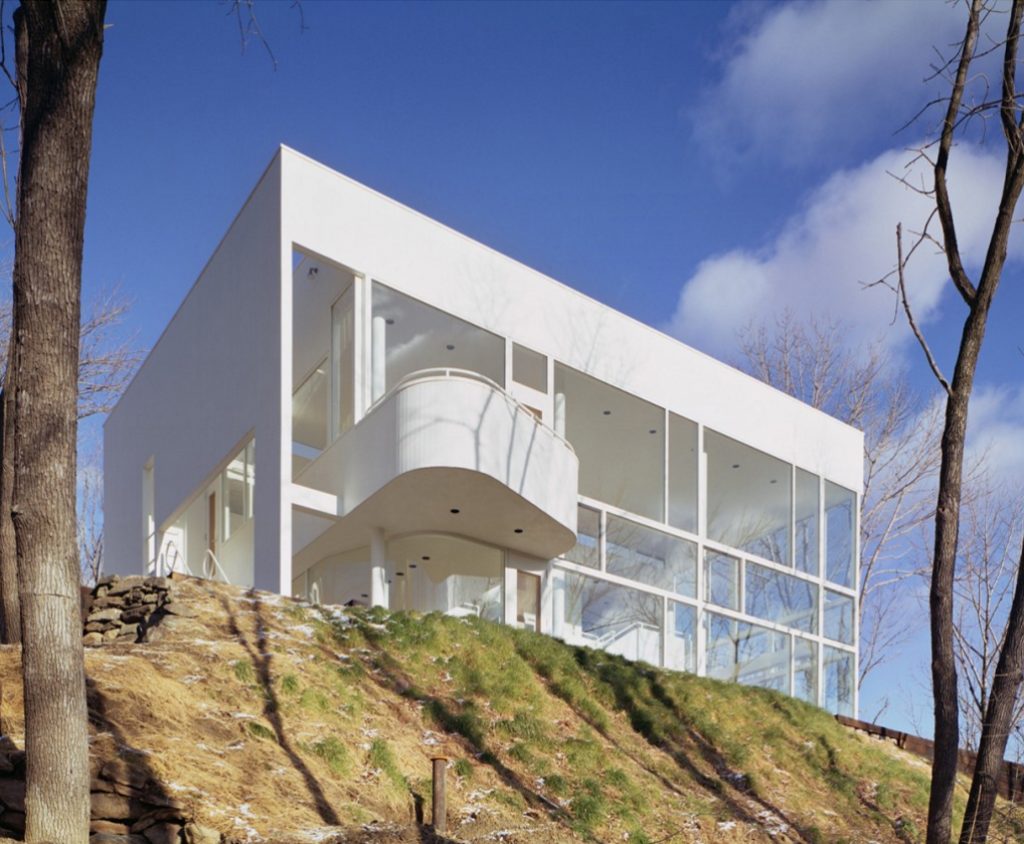 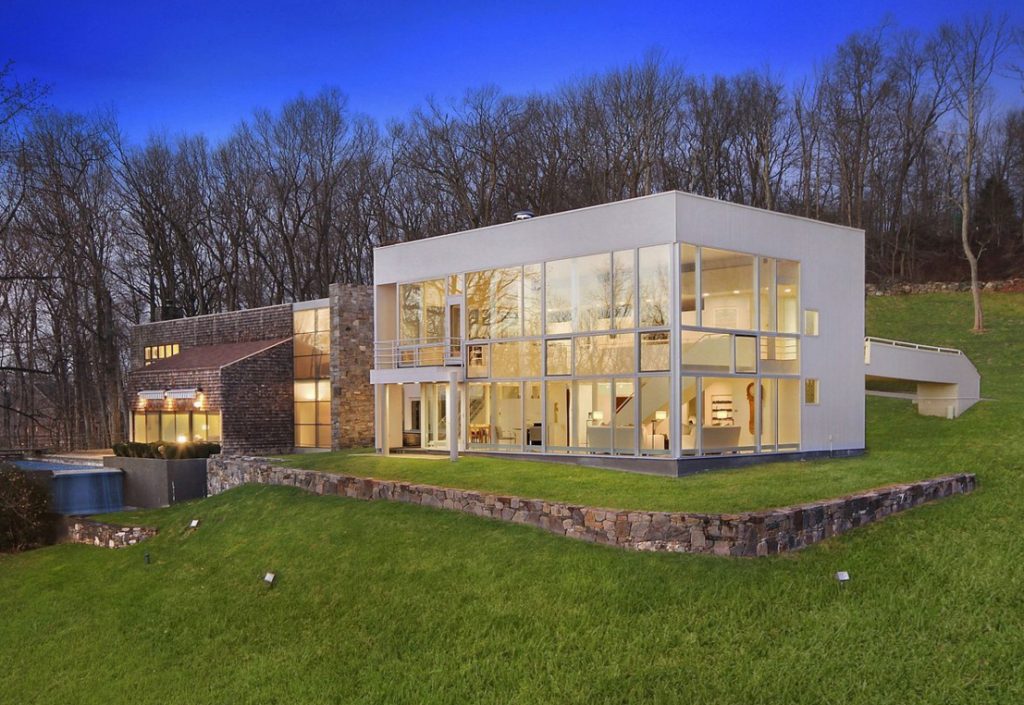 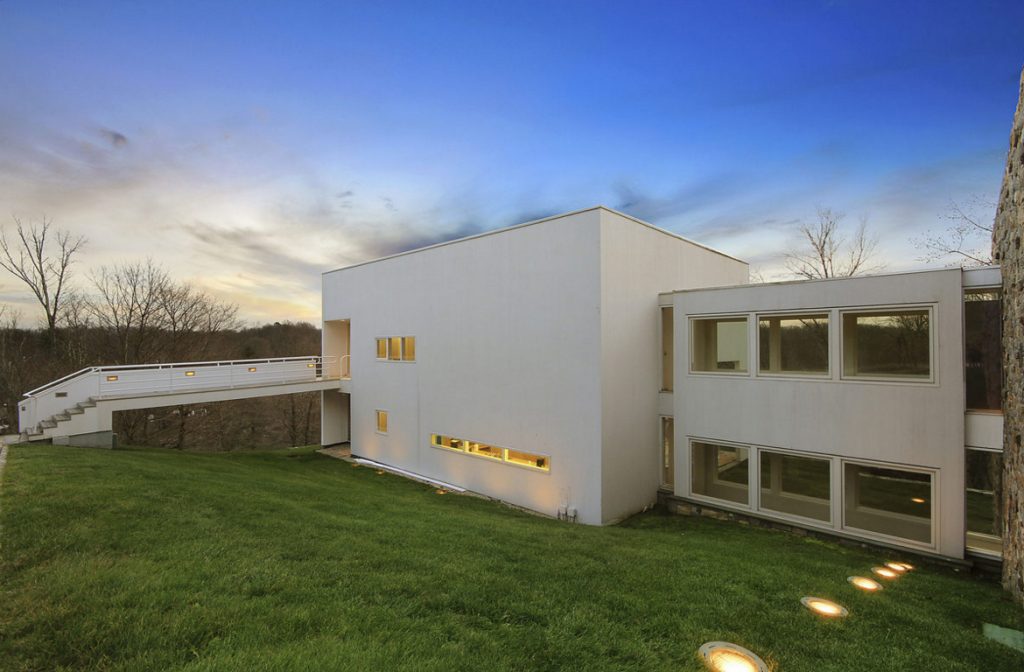 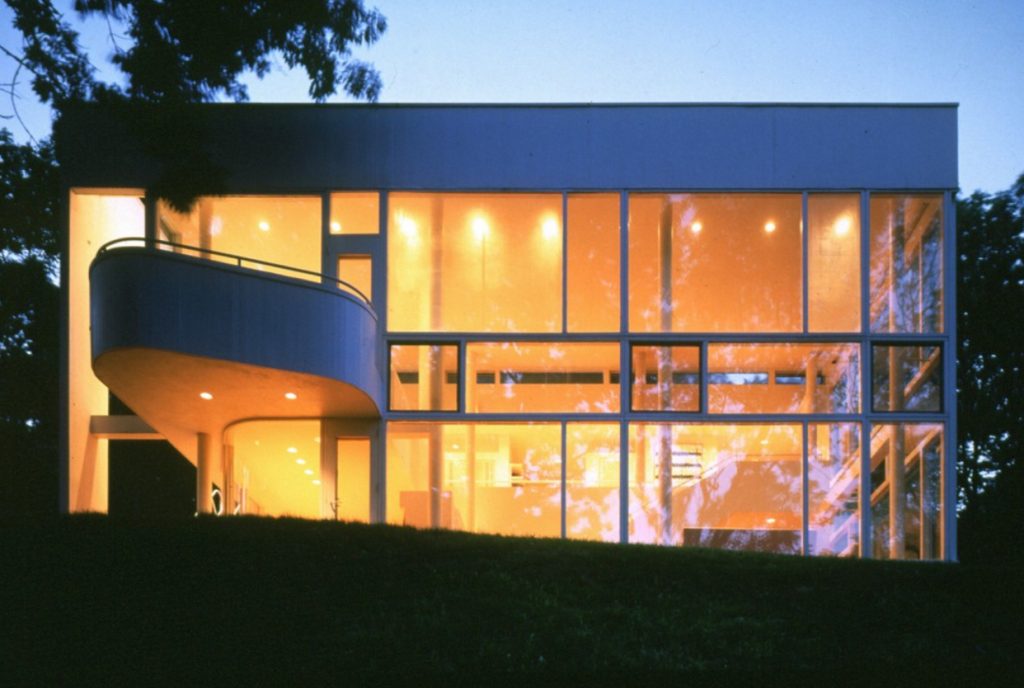 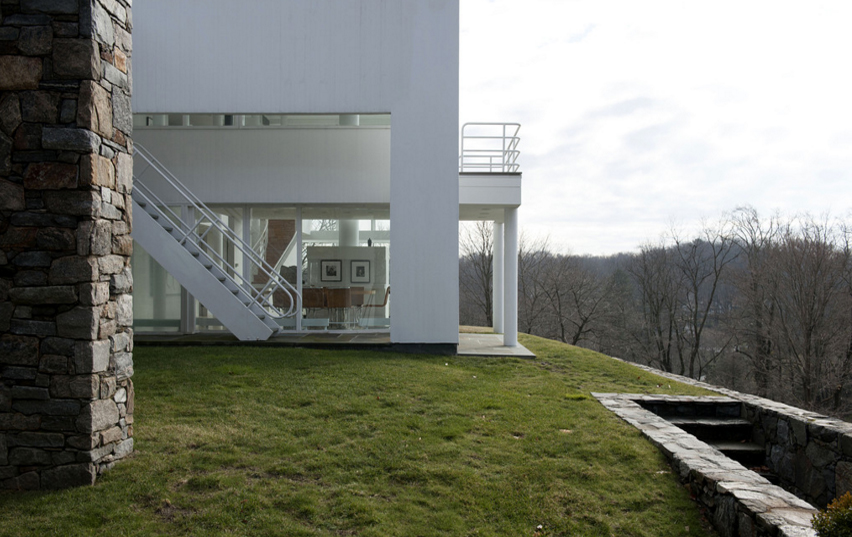 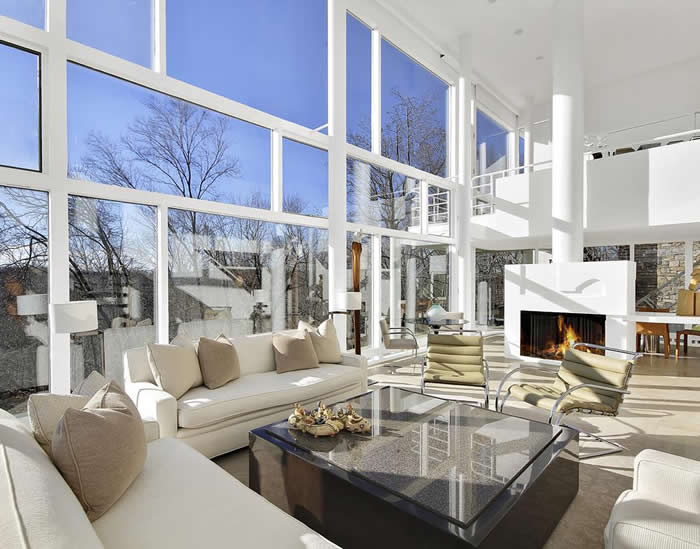 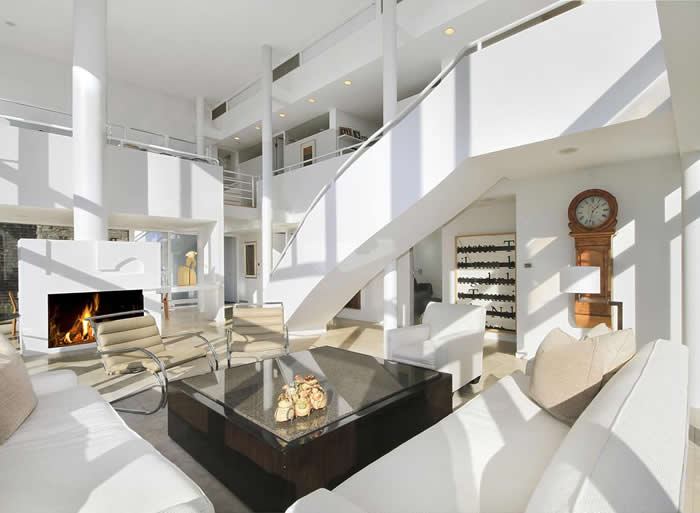 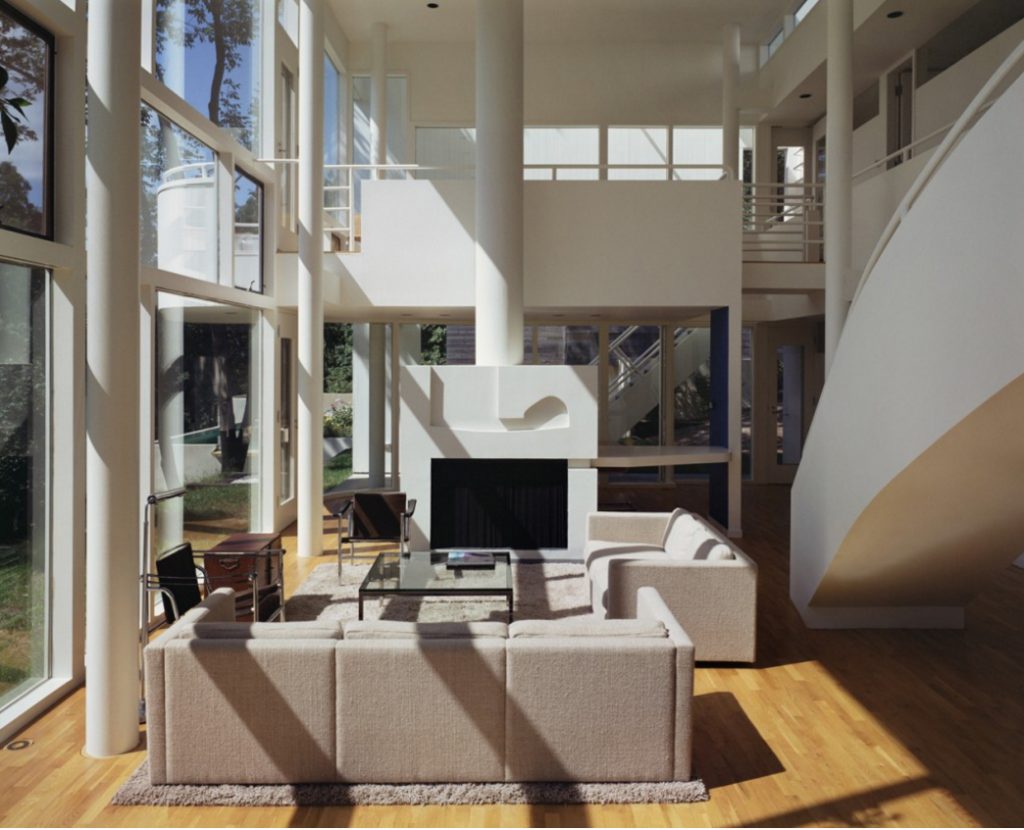 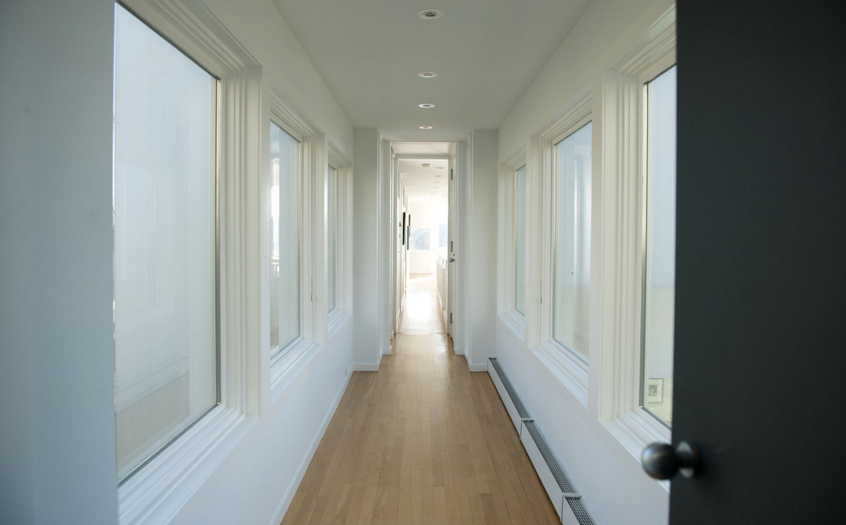