Description of the site

The site is located on the corner of Avenida Josep Llobet and the road to Sant Esteve n’Amat Ca. It presents a front of 241 m on the first and 140 m on the second. The first of the streets has a southeast-northwest alignment and has recently been opened while the second is oriented southwest to northeast and is the output from the town center to n’Amat Ca.

Their geometry is irregular. From the northern end of Avenida Josep Llobet up half his face has an average width of 13 m, from this point to widen the front end of the road to Sant Esteve Ca n’Amat a vaguely trapezoidal geometry.

Its topography is rugged. The front of the Avenida Josep Llobet pesenta a drop of 7.5 m between their ends while across the road to Sant Esteve n’Amat Ca has a slope of approximately 17.5 m between the two farthest points. The low sun also perpendicular to Avenida Josep Llobet, so that in the far north of this the difference between the elevation of your sidewalk and the opposite is 5 m at the southern end is 9 m. This section also presents a difference of more than 9 m from the path of Sant Esteve n’Amat Ca.

The core of the population is in southwest direction with respect to solar elevation and a significantly higher than this.

Along the Avenida Josep Llobet the site facing the Education Center and Primary Children Sant Estere Sesrovires and Sports Center. The first is located on the north side of the street and the second in the south. The boundary of the site as opposed to this street is a laugh that is at an altitude considerably lower than the own solar and wave determines its geometry. At the north end of Avenida Josep Llobet is the station of Ferrocarriles de la Generalitat de Catalunya. At the extreme south is a residential area of detached houses in a row.

Both the topography and solar geometry have strongly conditioned the implementation of the building.
Discarded the possibility of locating in the north, because at this point the width is only 13 m and the gap between its two parallel sides of 5 m, the new teaching equipment is placed in the corner of Avenida Josep Llobet and the road Sant Esteve n’Amat Ca, where the terrain is more varied and, despite the differences in standards, there is some platform that allows the sports place near the building. The situation at this point also facilitates an appropriate relationship with the core of both houses south of the sun as the urban center of the town.

The building is divided into L, with the body of classrooms and administration located along the Avenida Josep Llobet and core services (where the gym, the locker room, the catering and cafe-bar) parallel to the road Sant Esteve n’Amat Ca. The access is at elevation 155.50 v in the front of Avenida Josep Llobet, just ahead of the nearest crosswalk at the roundabout and slightly below the level of it. This access leads to a porch that links the two building blocks.

This provision in the set L can control from a single access point to the center while facilitating the independent use of the various component parts, so it is possible to serve the sports areas after hours without access to the body where are the main classroom and administration. It is also possible during school hours to supply the catering area or facility without interfering with the spaces used by staff of the center, directly accessible from the outside.

The other body of the building, which houses the catering, bar, cafeteria, locker rooms and
gym-hall, is situated on two levels to adapt fully to the natural slope
terrain. Contiguously on the porch of the same height access and it is the catering, bar and cafeteria. One floor below lie the locker room and gym-hall, also with direct access to the outside. To connect the two levels, creating a ramp into three sections accessible from the front porch the entire campus.

The courtyard space of the pupils fall within the scope defined by the arms of L constructed and are also available at two levels. At the same height that the ground floor of the building creates a platform with a row of deciduous trees that screened in the summer, the impact of early morning sun on the classroom. Three feet below is another platform where the sports are located, axially oriented north-west-south-east, and immediately accessible from the locker room and gym-hall. Between the two levels are created some steps that allow the observation of passing the lower level. 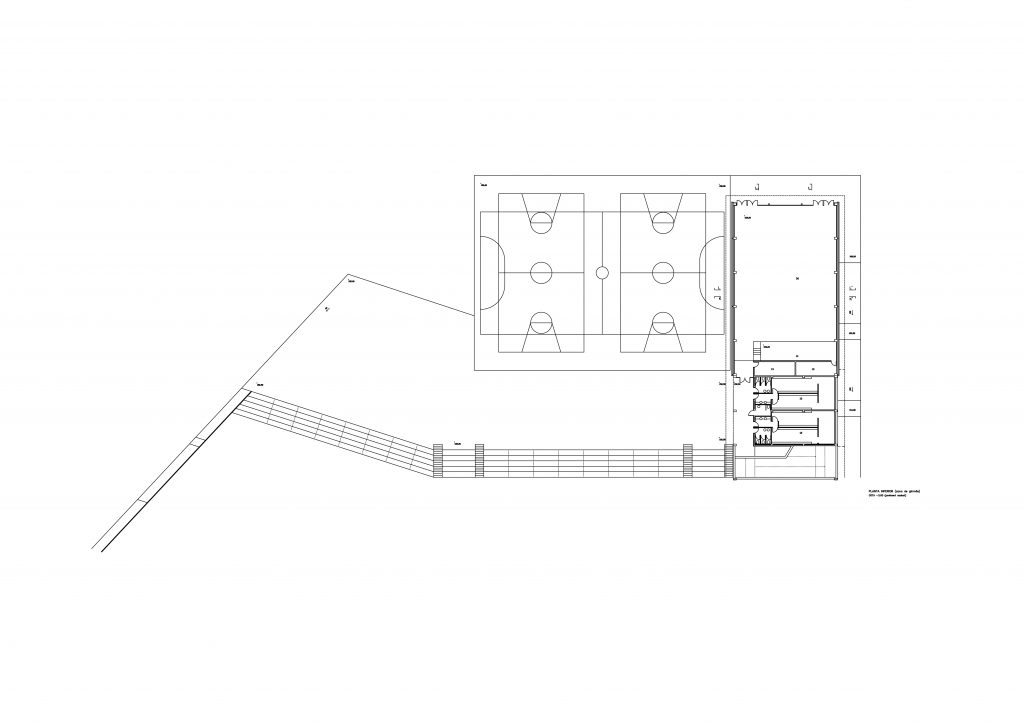 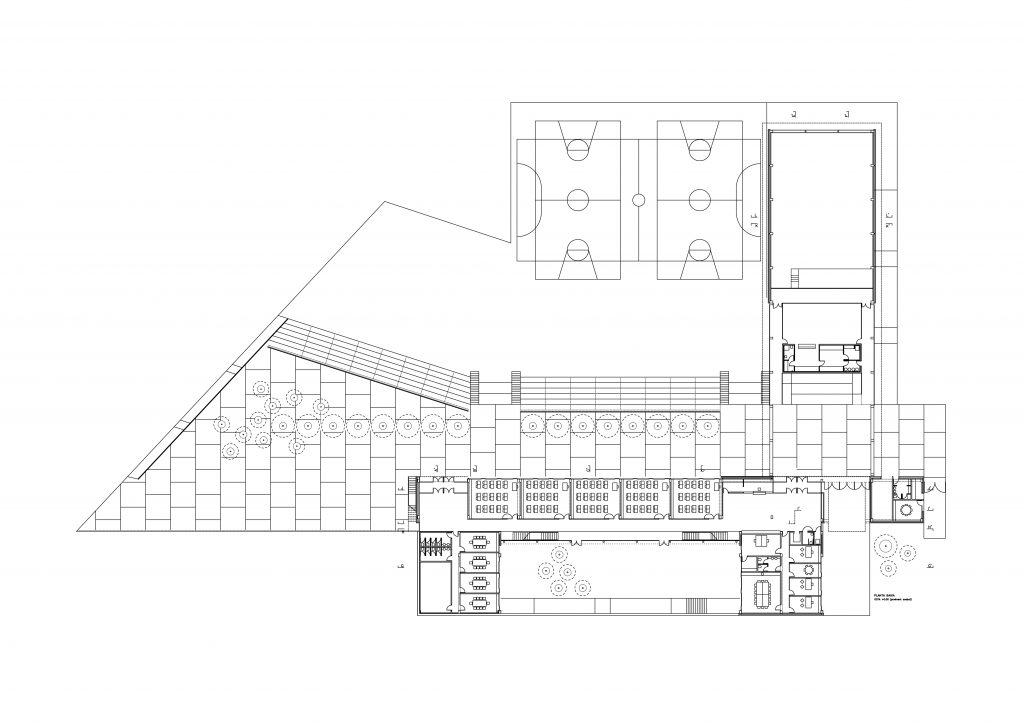 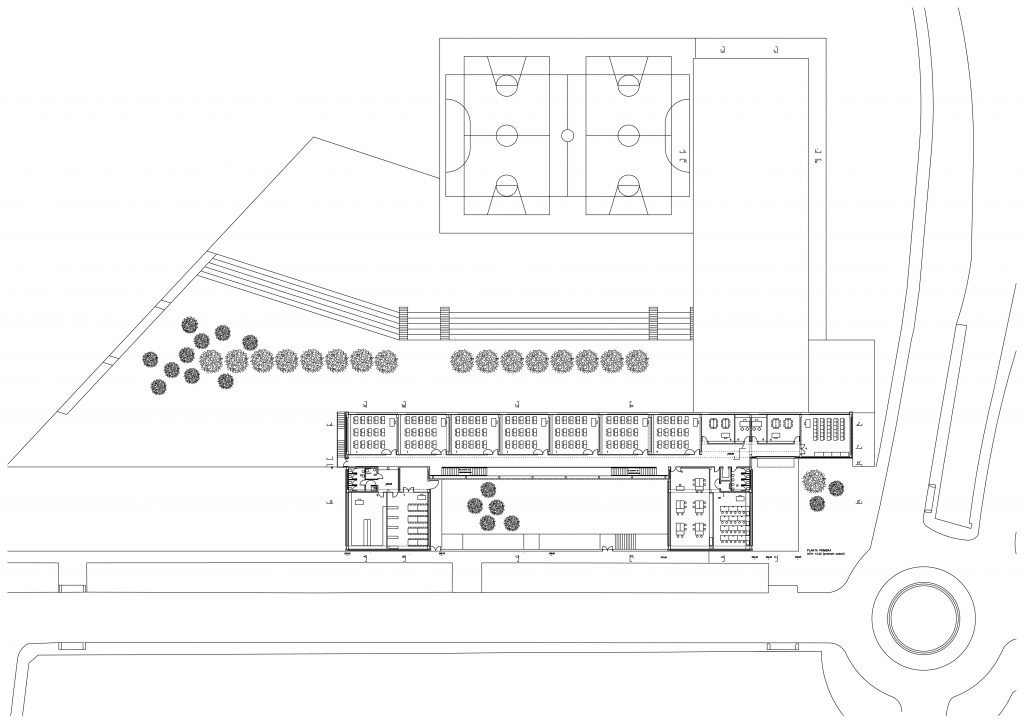 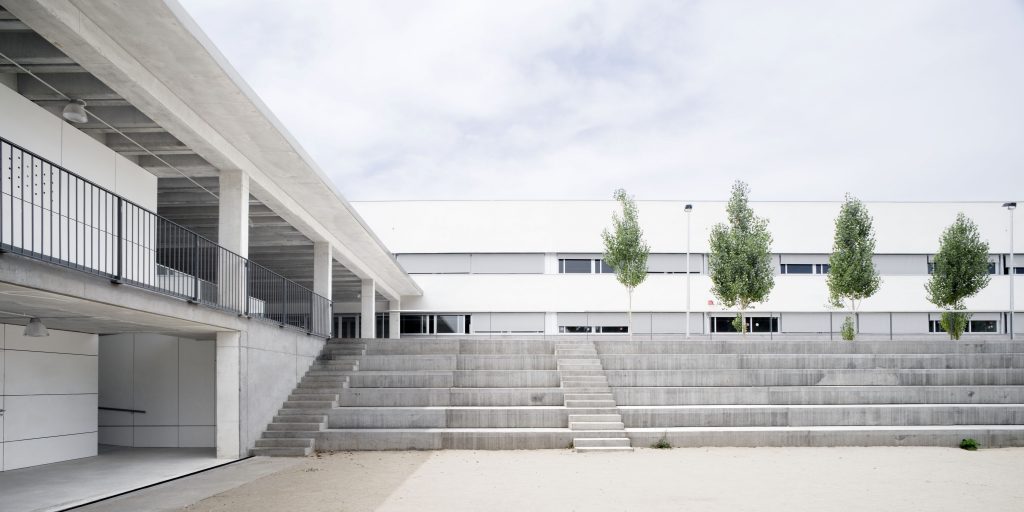 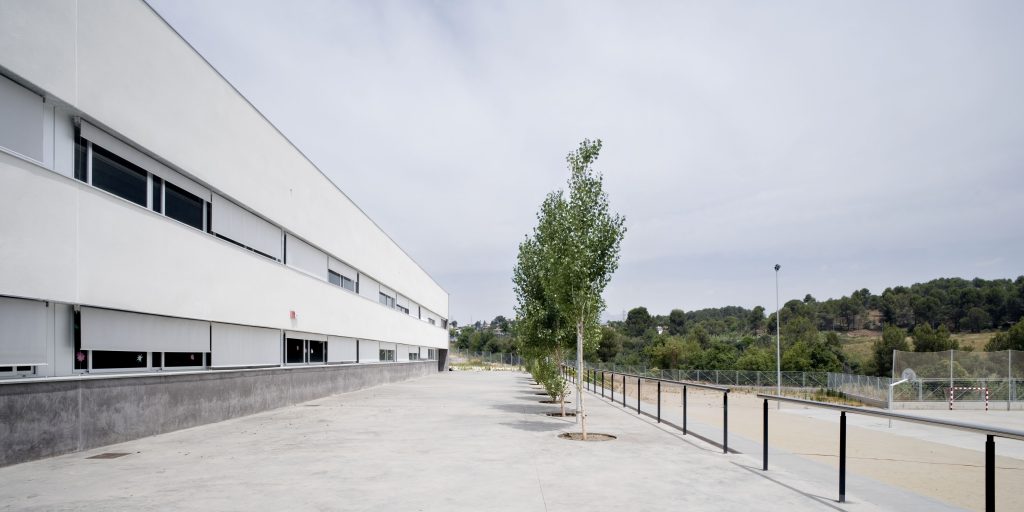 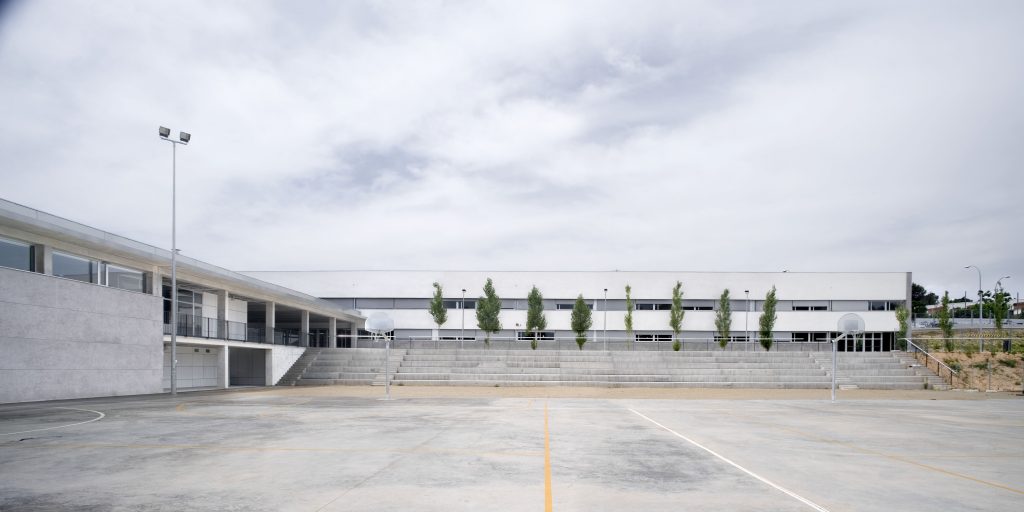 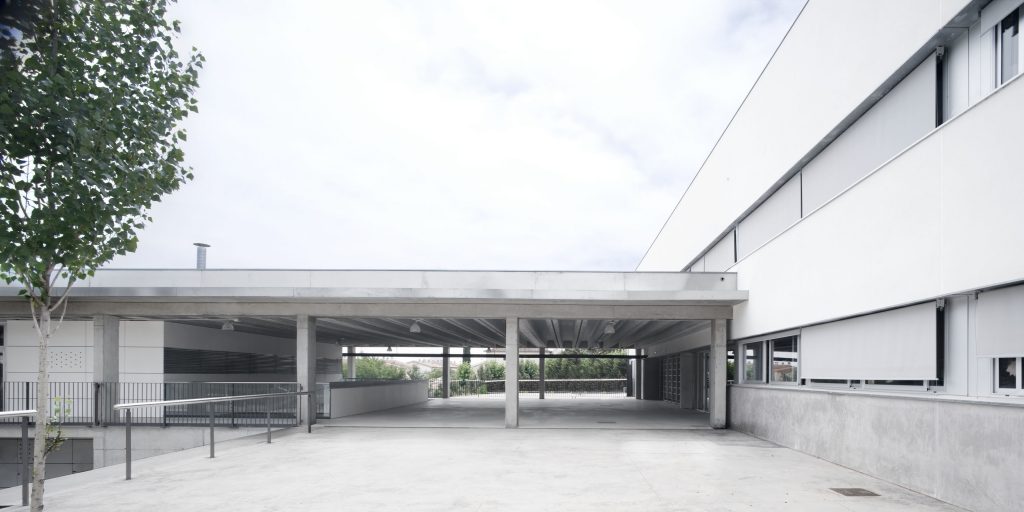 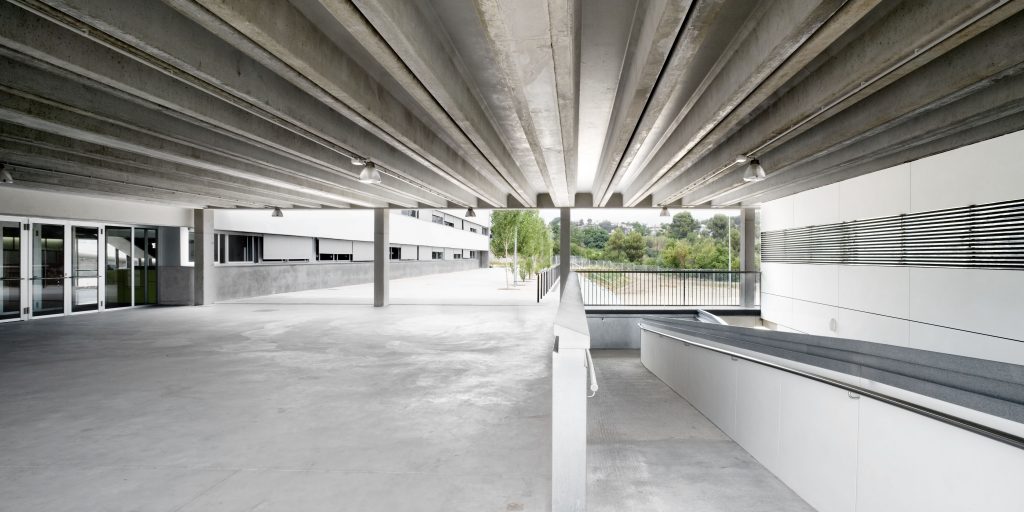 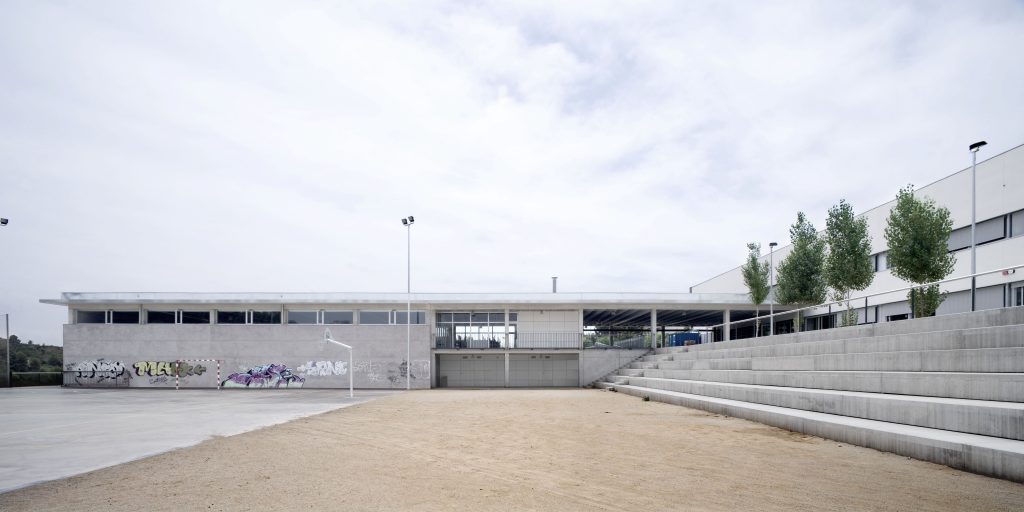 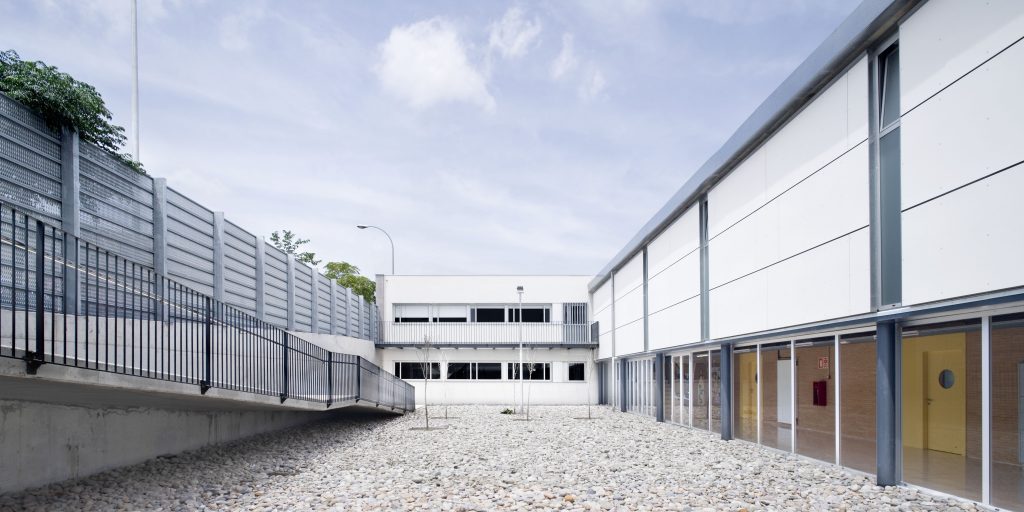 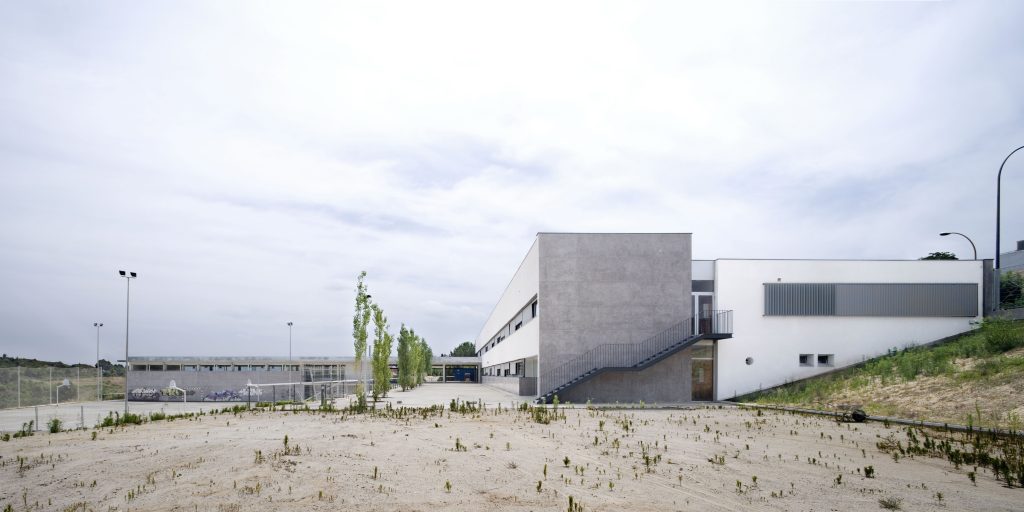 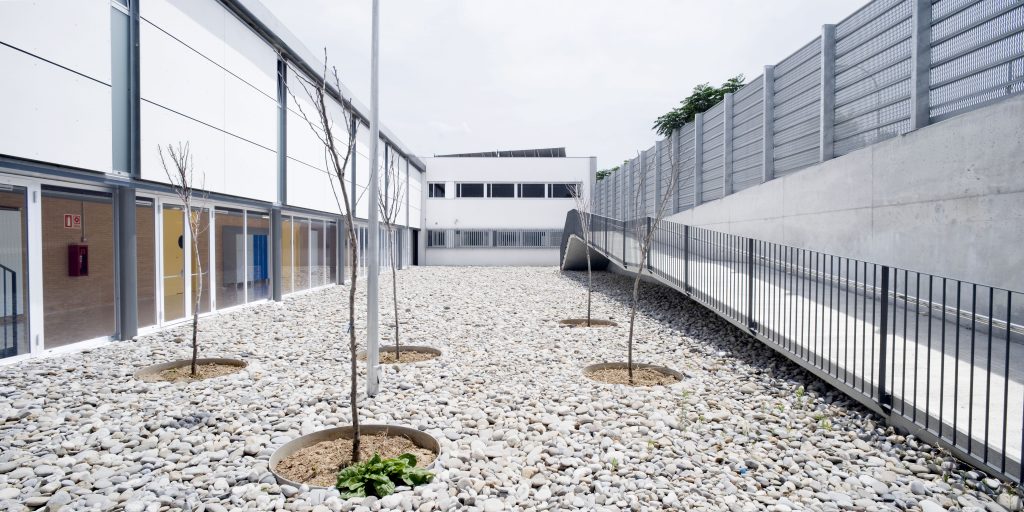 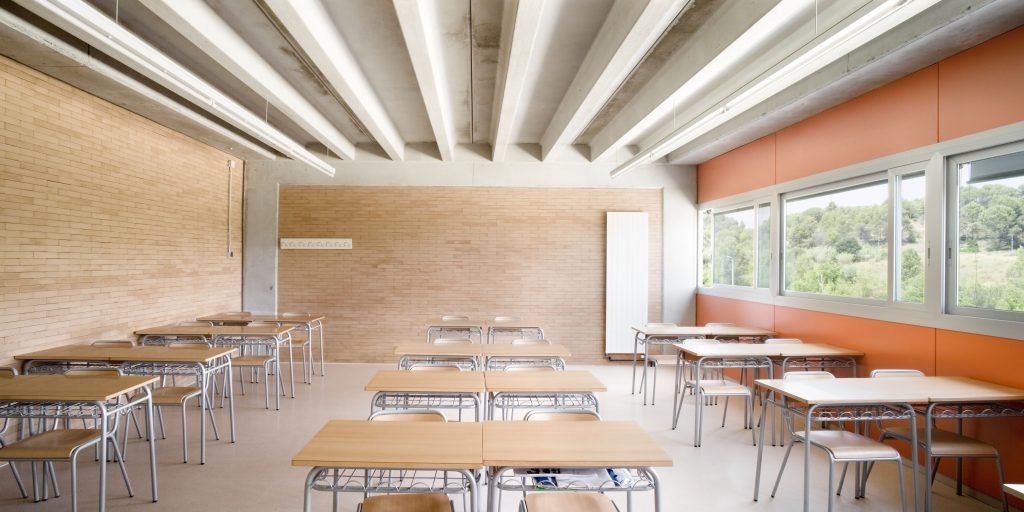 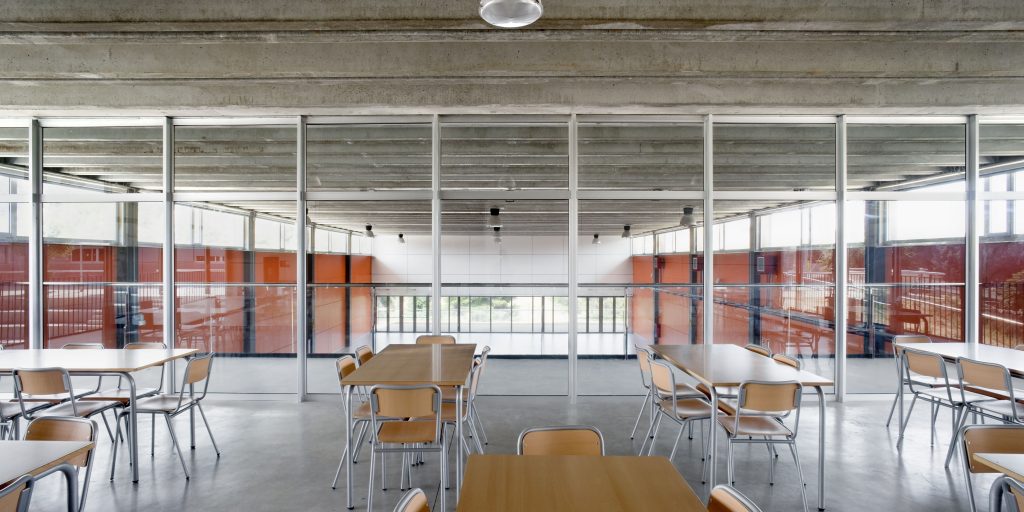 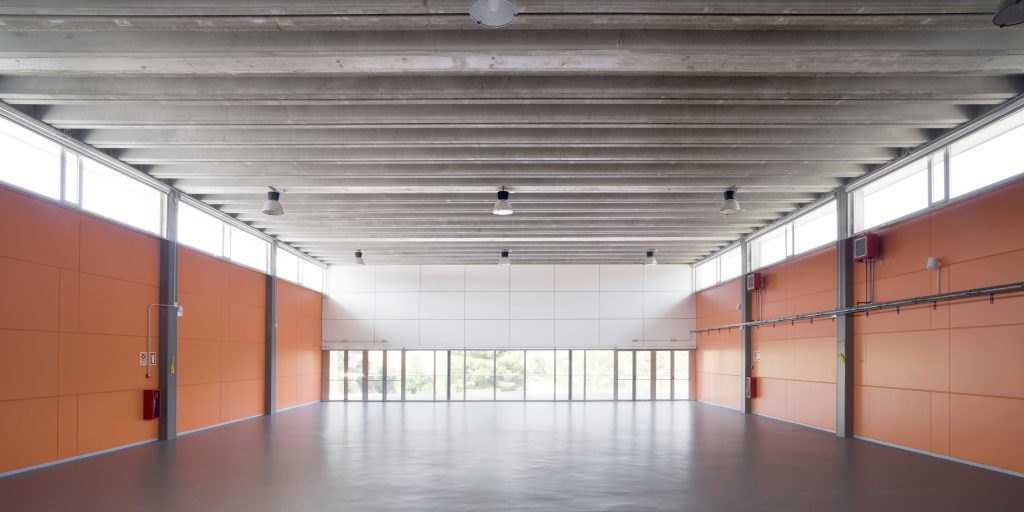 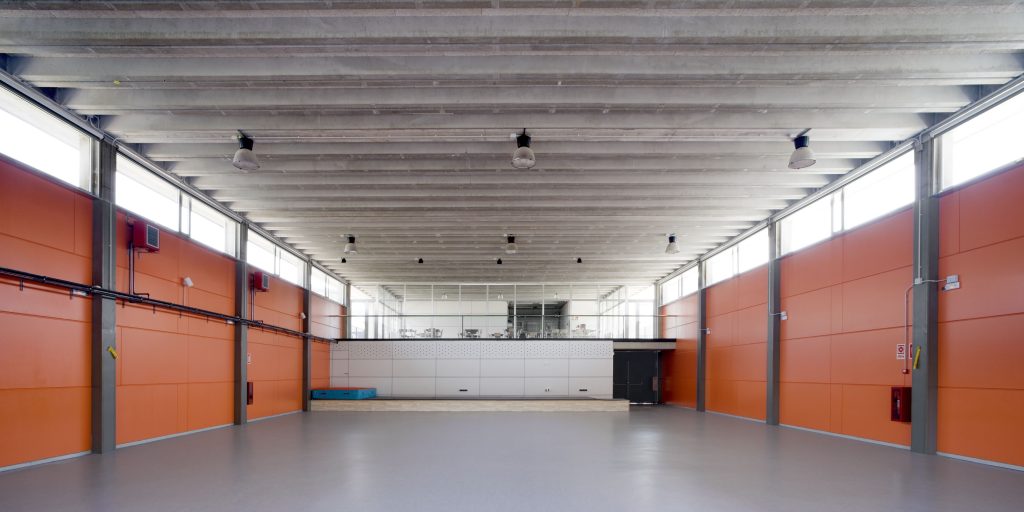 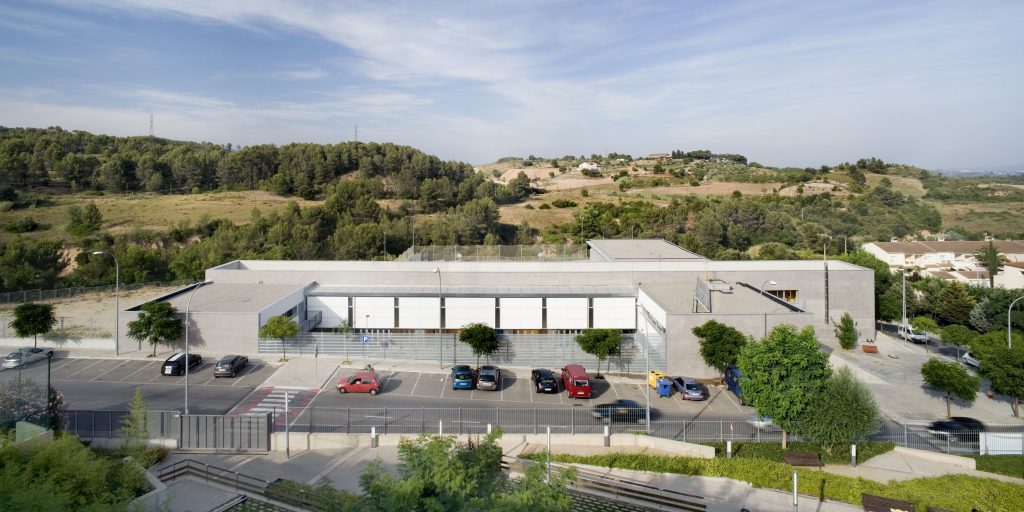 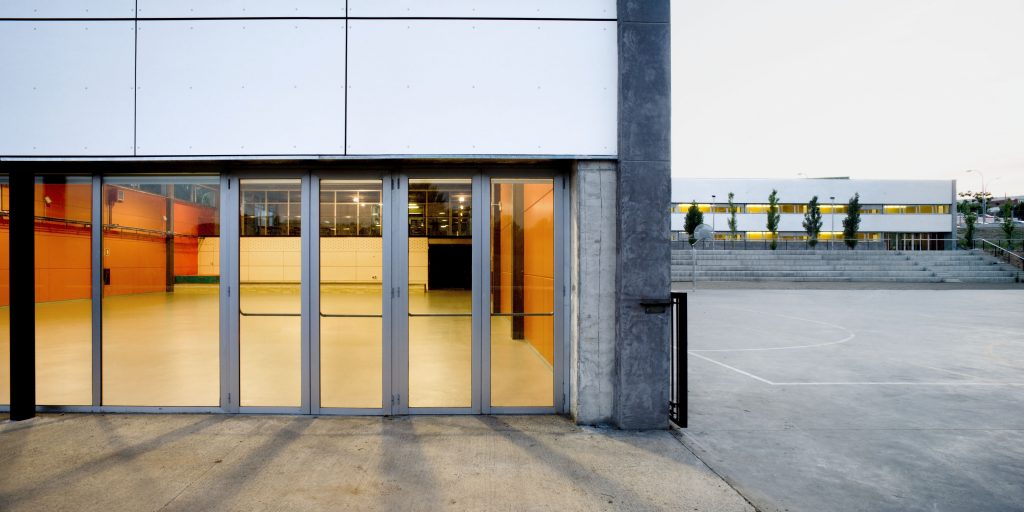 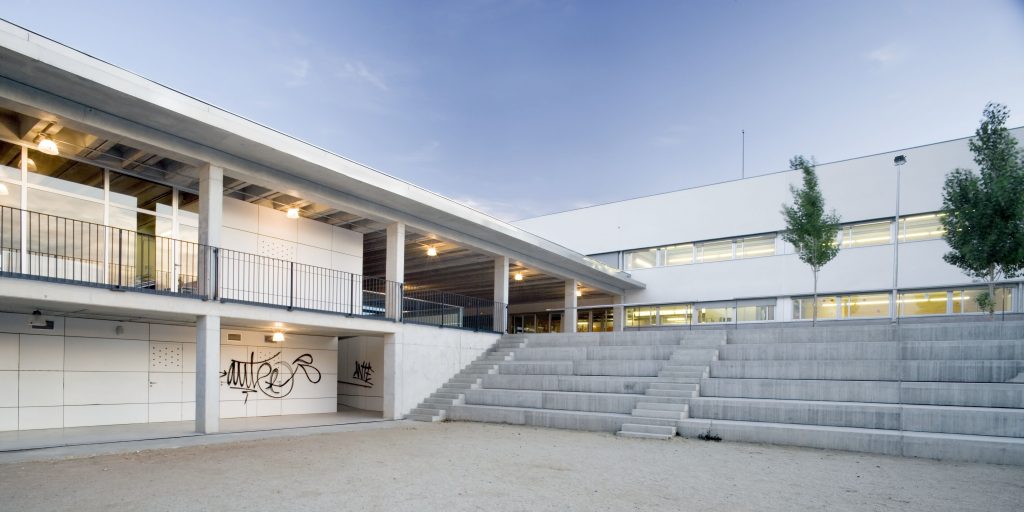 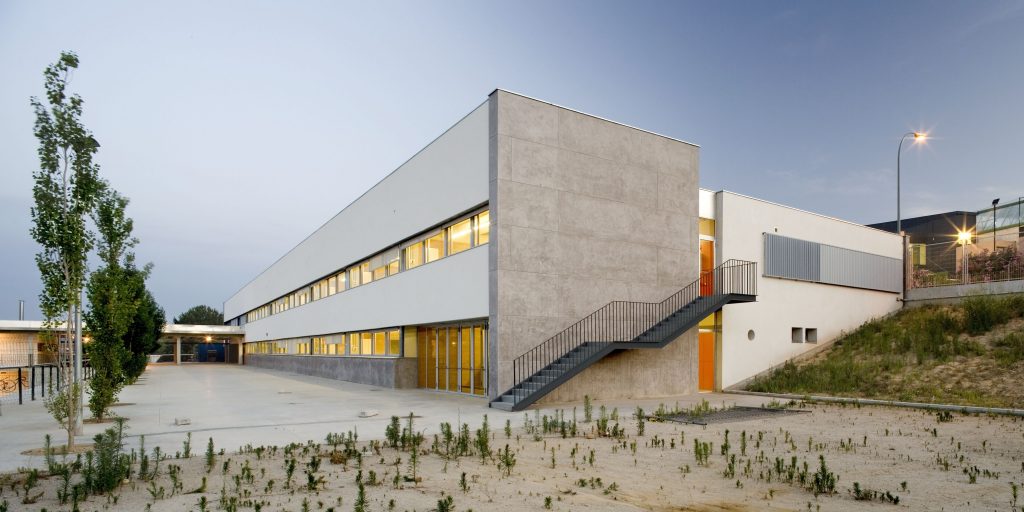 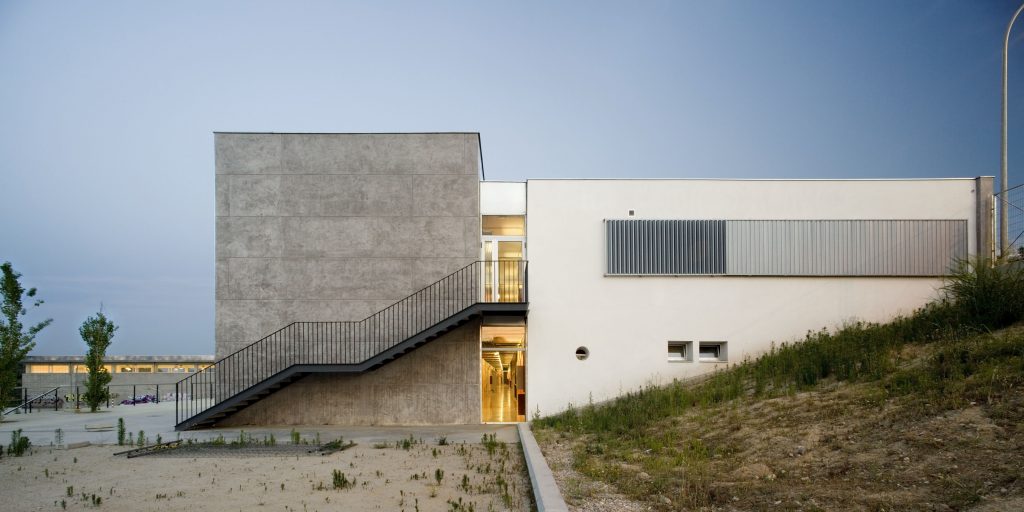