School of Fine Arts in Havana

In 1961, Castro and Che Guevara playing golf in the abandoned headquarters of the Havana Country Club and talking about how Cuba might invest in culture. Shortly thereafter, had outlined a plan to build new schools of art in the national golf left.

The lack of a clear economic planning and a pyramidal structure of decisions, made possible some examples of undeniable aesthetic value. All the National Arts School, architects Ricardo Porro, Vittorio Garatti and Roberto Gottardi (1961-1965), covering the national schools of dance, visual arts, drama, music and ballet, and should be about five blocks a large ground vegetation.

Architecture is an art, and therefore can not be judged as easily as political ideals. The set is undoubtedly a masterpiece, and its value is reflected in the brave intentions rediscover the cultural roots of a people, to give an innovative traditions, especially in the search for the architect to give poetry its buildings, deeply moving.

The idea stems from the desire of the revolutionary government in Havana to build a center for arts education, not just local, but to be the creators of the countries belonging to the so-called Third World. Ricardo Porro, established in Caracas as a professor of design at the School of Architecture at the Universidad Central de Venezuela, was called by the Cuban government to take charge of the works, and eagerly returned to work in his native Cuba. They were the first years of the Revolution, there was optimism in the people, and schools would be lifted as a symbol of what the new government was capable.

School of Art in Havana, had been regarded as one of the most unique architecture of the second half of the twentieth century. It is one of the few architectural works that have been developed in Cuba during the period after the Cuban Revolution.

The City of Arts, as it is known, grew up in privileged space Cubanacán, headquarters of the former Havana Country Club, is bisected by the River Quibú in Havana, Cuba.

The set consists of five schools located in one of the most beautiful natural landscapes in Havana.

Although each of the architects designed with absolute freedom, all based on some common assumptions. Thus, despite the wide variety of individual approaches, the whole unit achieves an amazing, beautiful and extremely complex.

The architects sought to integrate its three buildings to the landscape, respecting the extent possible the spectacular natural environment and ultimately, each of the young designers resorted to the use of covered walkways to connect the different parts of each school, a strategy that recognizes Porro have reinterpreted from his memories of the city.

Initially, the three architects had total freedom and independence in budgetary decisions design. It was they who decided the location of each of the five buildings that make up, and those among them who decided to pursue in detail each of the buildings (only three were completed and were used in part).

The unexpected cost of the buildings and the uniqueness of its design, causing numerous allegations of waste and economic weakness bourgeois. These allegations eventually weaken the support and the project was finally abandoned the schools were not even be completed its construction.

In 1965 the project was stopped. Porro and went to Paris to Milan Garatti. Only Gottardi stayed.

Reactivation of the works

In 1991, John Loomis Gottardi led the architectural historian of California, to see what remained of the schools.

Loomis was surprised at the “magical realism of architecture and landscape.” At the end of the 90s, he published a book rehabilitated Cuban revolutionary architecture (Revolution of forms. Cuba’s Forgotten Art Schools). And when you read Castro, criticized officials for allowing the schools of art fall into such a state of neglect.

In December 1999, invited three architects to return to Havana to get the job done. The work is progressing, albeit slowly. The money is not plentiful, and today the priority for the city, tourist hotels aside, is housing. In fact, it was partly the urgent need for housing that led to stopping the project in 1965. Then he moved to workers and young architects throughout the country to build homes of concrete Soviet-style. The results were uneven, and many of these buildings must now be demolished or reconstructed.

Like many of the projects undertaken by the Cuban Revolution, the National School of Art is never finished, but there is still the most important school for the arts in Cuba. The students have learned to function and prosper within the unfinished structure. The School of the Arts is a particularly successful, and recently has produced artists who have achieved international recognition. The schools never met the aspirations of the great architects, however, are still used in its current state of partial ruin.

At the National School of Plastic Arts in Havana is developing a project unprecedented blend technology unusual in Cuba for the leadership as the brick, sensuality, language full of eroticism, inspired by the female reproductive organs, with a recognition andalusia mestizo character of Cuban mixes elements of the African village with more portals in Europe, the exuberance of nature, color, and discover the mystery of the architecture while it runs.

It became evident that the National School of Art does not fit into the pre-fabricated simplistic functional style of Soviet architecture, and this difference led to his critics as individualistic, an attribute not in character with the Revolution, based on aesthetic criteria rather socialist rigor.
Critics were particularly upset with sensual architecture of the School of Visual Arts designed by Porro, and expressed their distrust to the ubiquity of Catalan vaults.

Moreover, the team of architects faced antagonism within the Ministry of Construction, Porro it was not the bourgeoisie and the proletariat, and not Garatti and Gottardi were Cuban.

All the architects adapted their designs to structural forms of brick, in response to the shortage of steel and concrete caused by the U.S. blockade, resulting in a beautiful concert of domes and vaults Catalan throughout the school.

Is a set of organic geometry of architecture, built with extensive use of the Catalan vault tabicada tradition. Their free, expressive and unpublished, summarized the cultural metaphors, the merging of the codes of modernity, the colonial tradition and the rescue of the black culture, representative of the stage “surreal” the Revolution.

The Catalan vault or vault tabicada (volta Catalan Catalan) is a construction technique traditional Catalan. Is to cover the site or through a roof space of bricks laid by the flat part, ie the inner surface is greater than the length and width or rope or blight of brick, rather than by any other thick sides.

The five buildings were intended to exist as independent structures, but also worked together as a whole aesthetic, figuratively bound through three guiding principles.

The first feature of the three architects decision was mutually agreed to respect the surrounding landscape.

The second element was the shared use of native materials, which would limit the architecture with a positive effect. None of steel and cement were very low in Cuba because of industrial underdevelopment, and that these materials of Modernist architecture were replaced by brick, tiles and terra cotta tiles, which are much lighter than cement and are virtually indestructible.

School of Fine Arts in Havana 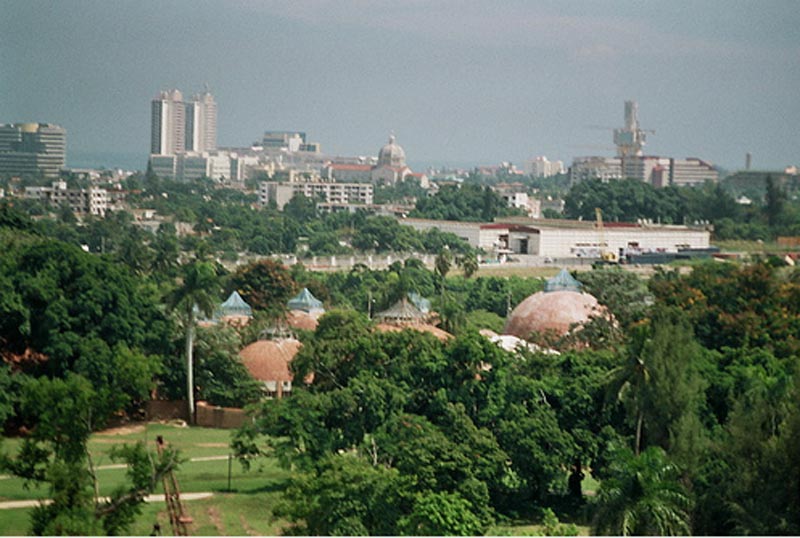 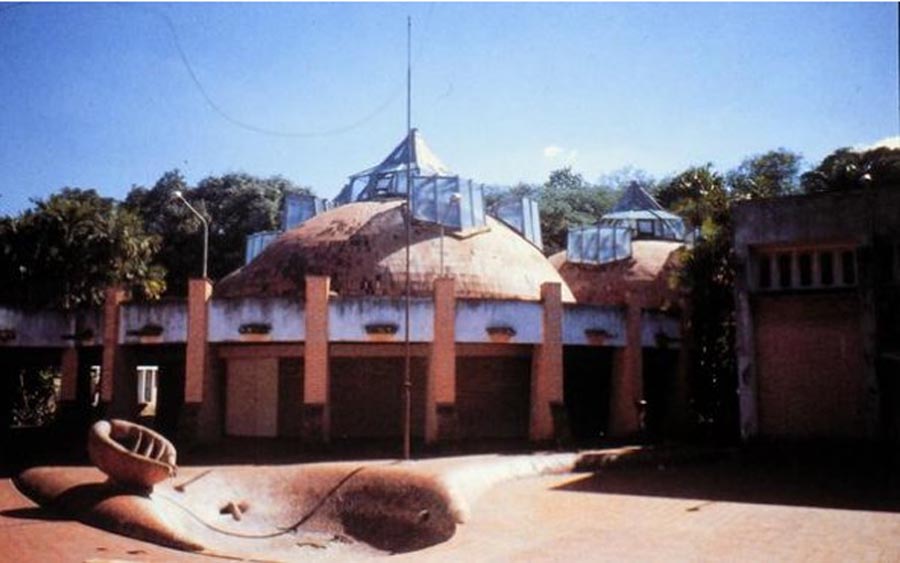 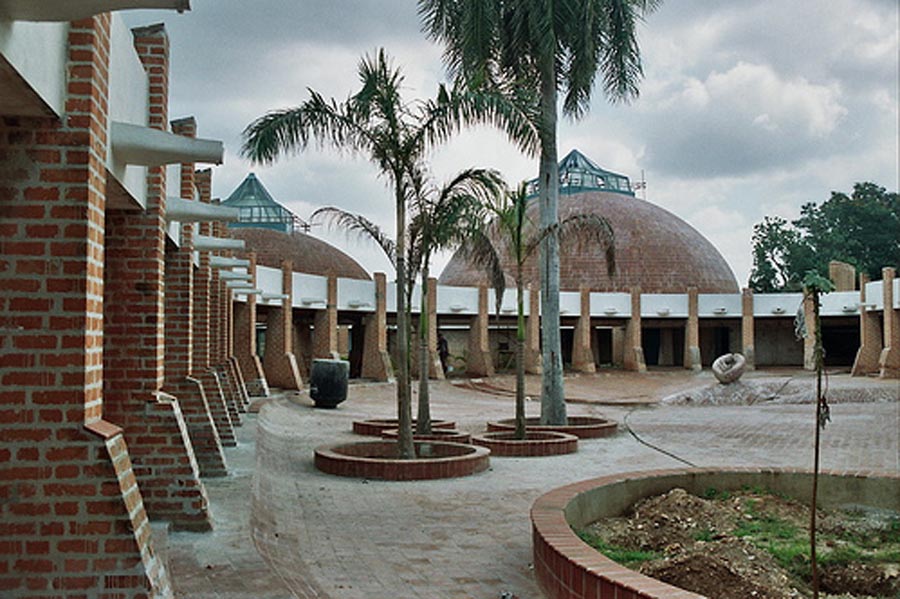 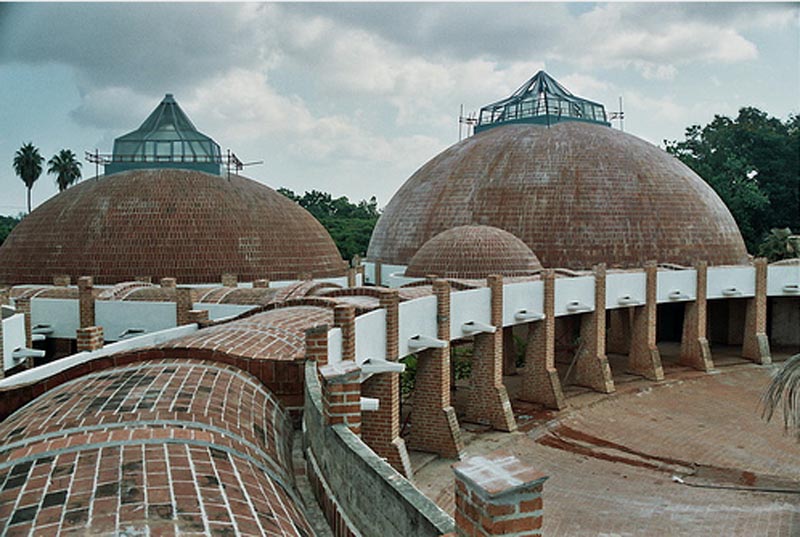 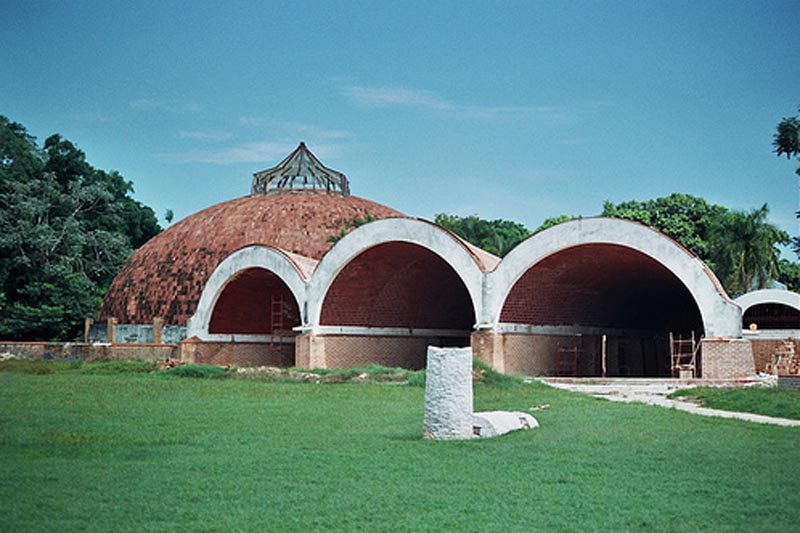 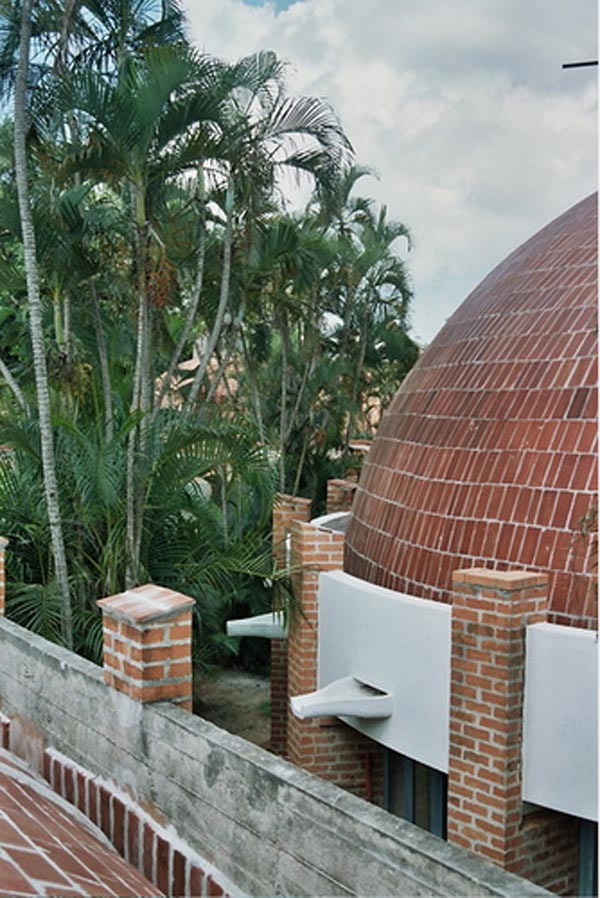 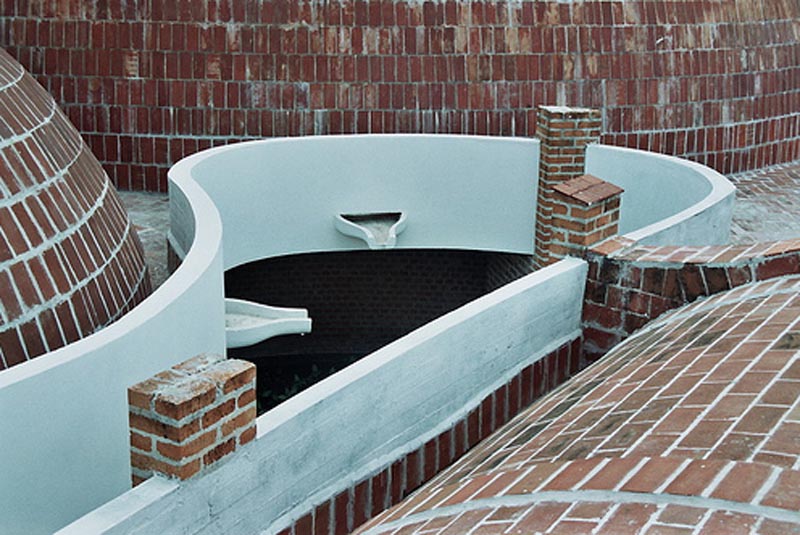 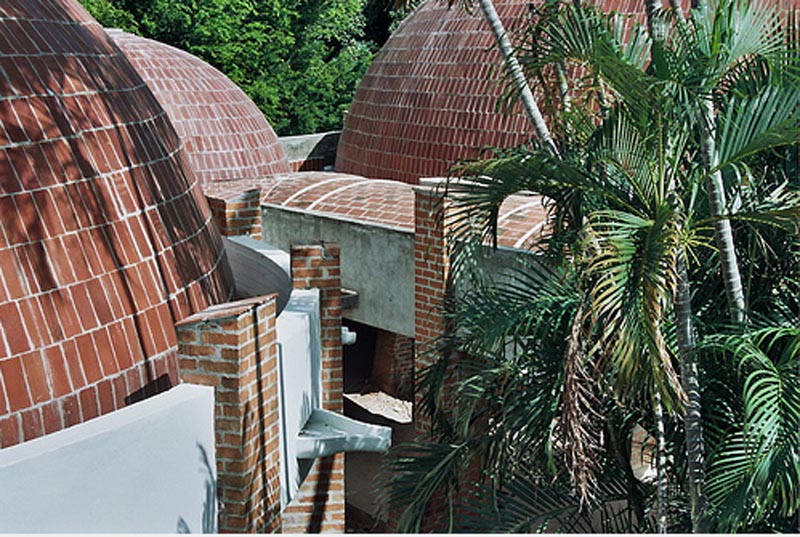 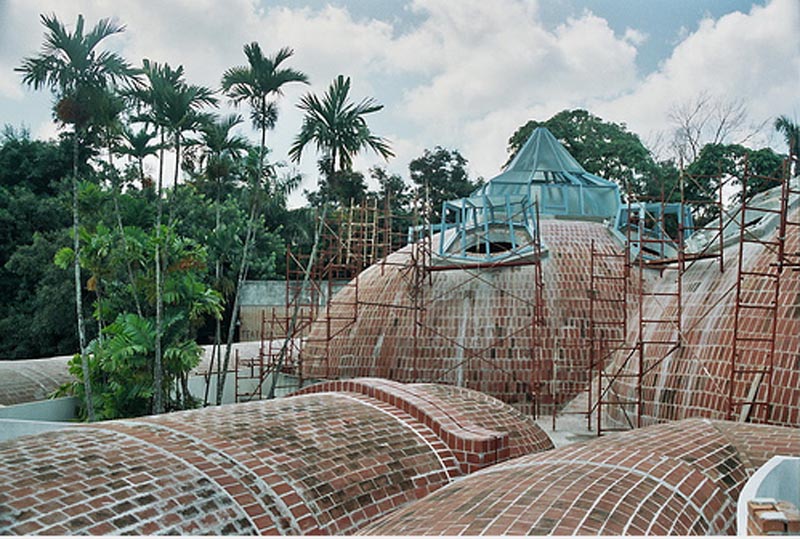 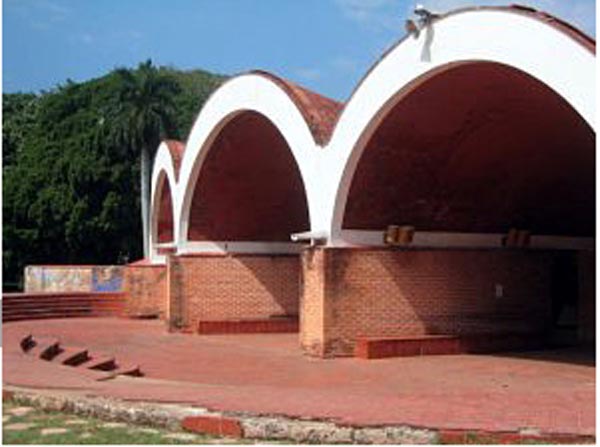 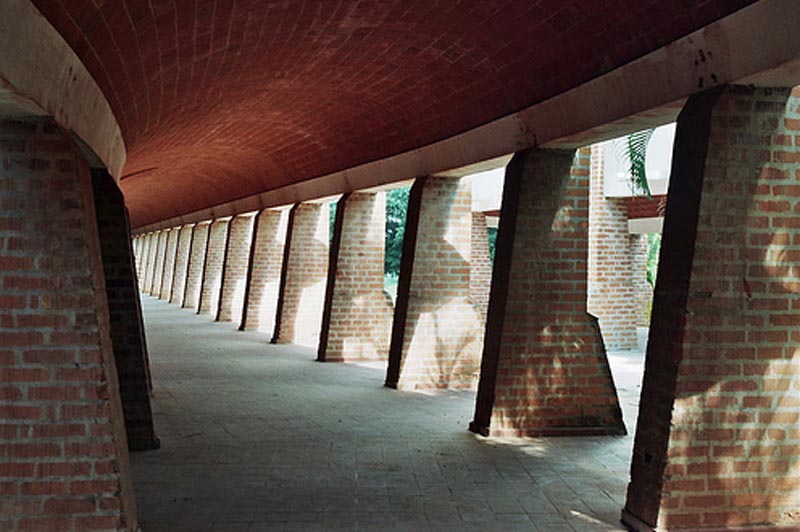 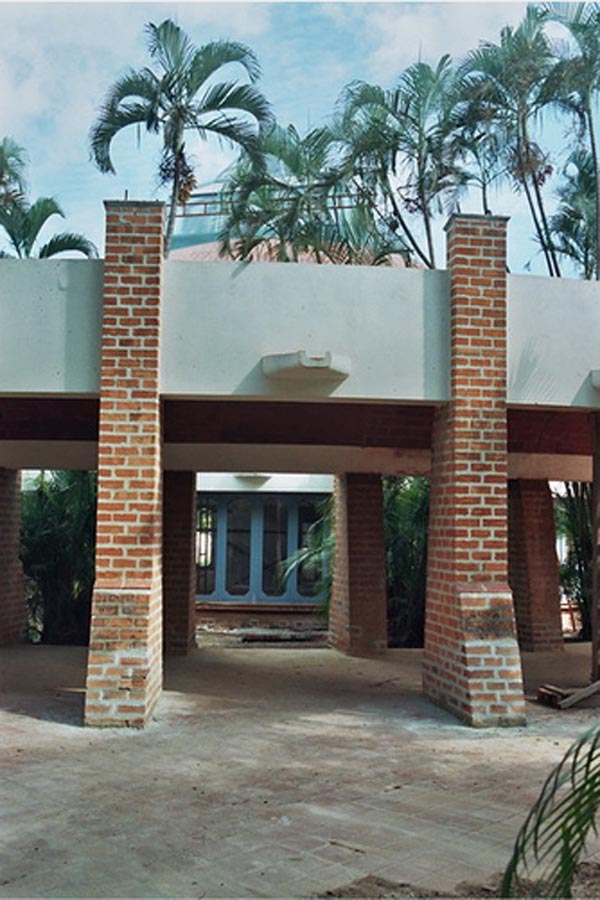