Scheu House built by Adolf Loos between 1912-1913 for Gustav Scheu lawyer and his wife Helen, not only was the first house terraced building the architect, but mainly one of the first overt construction of architecture flat roof. This characteristic, unusual at the time, caused many conflicts with the municipal authorities. The owner had to commit to cover the front step and smooth with ivy, just did it on the side facing the garden.

A consequence of the terrace, Loos had to prepare a project for the lot adjoining which show that the terrace Scheu House would not prevent subsequent constructions.

Scheu was a lawyer and intellectual Viennese aligned with the Garden City Movement, his father was a founder of the Austrian Socialist Party and was aware of the significance of having Loos as a designer of your new home, who shared architectural tastes always giving unconditional support to the architect’s progressive sensibility.

The house at that time was criticized for his appearance “Algerian” is now considered an essential component of residential Viennese culture Hietzing.

The House Scheu was constructed in the street Larochegasse No. 3, in the suburb of Hietzing, Vienna, Austria, where most of the houses were symmetrical and neo-classical style, creating conflicts with the city in its initial phase.

Residents in the neighborhood were surprised by the new aesthetic that would house the neighborhood and labeled it a disgrace and an insult to common sense. Loos stood firm in their rational decisions, with the only concession to plant ivy on the facade of the garden to make it aesthetically less severe.

For the first time in this Loos used courthouse rational principle “terracing” in the future, together with the concept Raumplan, define the two architectural concepts characteristic of townhouses designed by Czech architect, as in the Tristan Tzara House in Paris or Villa Müller in Prague. Loos applied the principle of terracing on the idea of ​​gaining access to the terrace, located on the east side of the house, from any of the bedrooms as a symbol of personal freedom. The feeling of the people of being outdoors reflects the new bourgeois avant-garde body awareness.

Moreover the new building materials and especially reinforced concrete, were an essential argument for Loos. The architects could design and build waterproof flat roofs, as conventional roofs were technically no longer needed to conduct stormwater. Thus, the terraced house was to Loos, as an idea and as an architectural work, the expression of modern architecture.

Undoubtedly, the Scheu House is alien to its surroundings, with a surprising way. It is an asymmetrical tiered volume, a building consisting of two houses, the main house and a separate apartment located in the higher modulus.

The door on the right side of the building, which at first sight seems the main entrance, is actually small private door to the attic apartment. The entrance to the main house is located on the left side.

Due to the staggered, each of the bedrooms of the facade facing east enjoys a generous balcony that is set back four meters.

The building is 16 meters long in total, with all windows of different sizes based on the combination of a single module.

Probably this building was the first in which a flat roof is designed as an outdoor terrace in Central Europe. What is certain is that these terraces would play an important role in the development of twentieth century architecture at a time that would become the subject of great controversy.

Ten years later, Loos describes the advantages of the flat roof in a paper on the project made in 1923 for the terraced hotel Grand Hotel Babylon: “Since the discovery of the reinforced concrete ceiling, gravel roof, and from the use of asphalt, you can perform both flat roofs and terraces. Such roof was, for four centuries artist’s dream of building a dream that came true in the mid-nineteenth century. But most architects do not know what to do with it…. ”

The building has four floors: a basement lit, ground floor, first floor and second floor where another house was built completely independent.

The receiving daylight basement was designed so that in the future could hold a gym.

The ground floor is the main floor and in public and she observes the bourgeois atmosphere of the play, and his reminiscences of traditional English architecture, across different functional areas.

The entrance hall is typically English and born in the stairs to the top floor of the bedroom. On this floor there is a terrace to the garden, the kitchen, a music room that also serves as an office, a dining room and a library with a cozy nook, “inglenook”. This corner of the chimney from the start manifested in the works of Loos, the architect to represent the gathering of the family, a place to meet and share moments.

On this floor bedrooms were located both family and service. The bedrooms facing the east façade have large terraces. A dealer hall gives access to different areas including the bathroom is on this floor.

This second floor was built as completely separate department whose entrance is on the left of the main facade and accessed by a spiral staircase illuminated by natural light through three large windows that rise above the entrance. As is characteristic of the house has a large terrace, bathroom, kitchen and bedroom.

Reinforced concrete was used in the structure and ceiling plane forming the upper terrace gravel and asphalt for waterproofing.

Inside, the walls of the public areas are covered with matte dark oak and the bedrooms, private areas, wood painted white. This distinction of spaces between public or private, reflects the notion of domestic space developed by Loos. The floors are wood also. 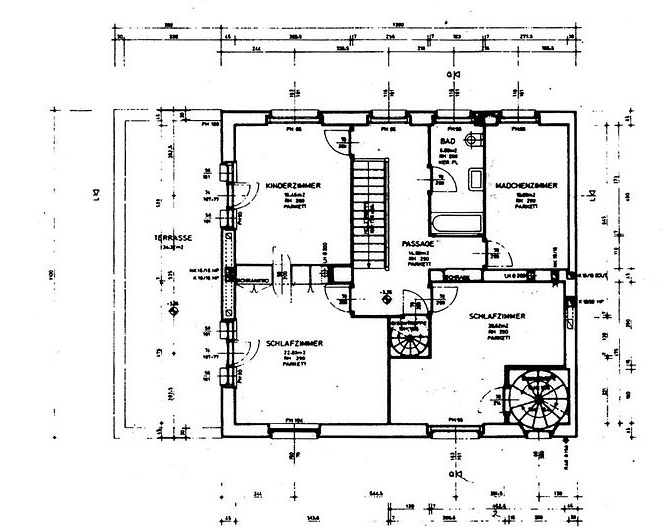 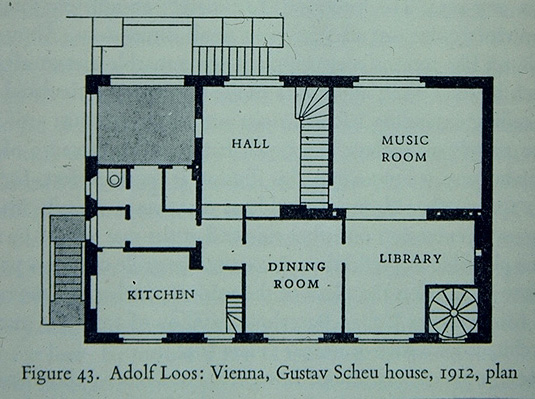 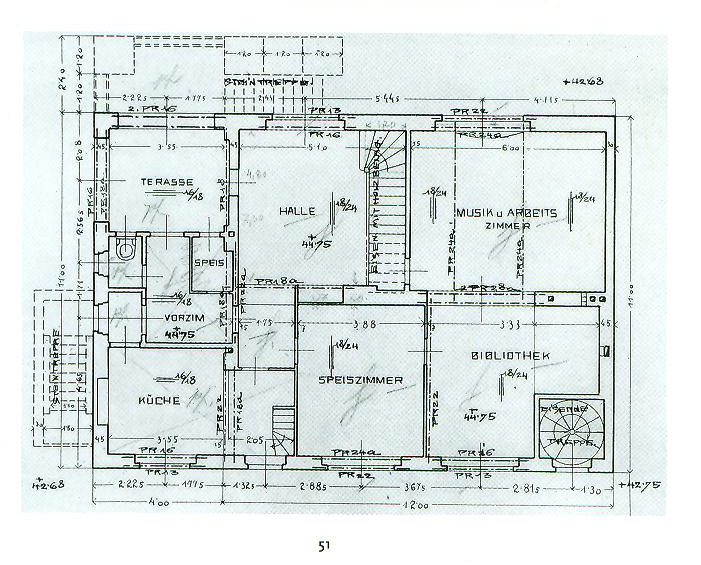 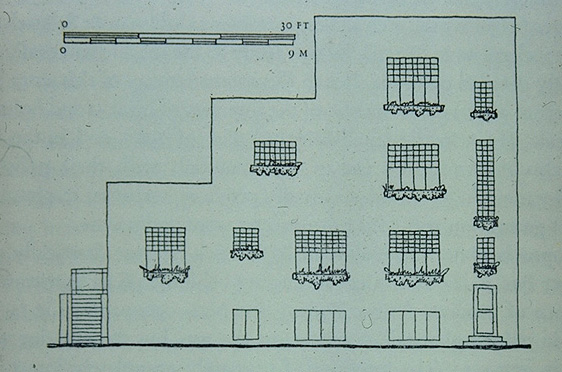 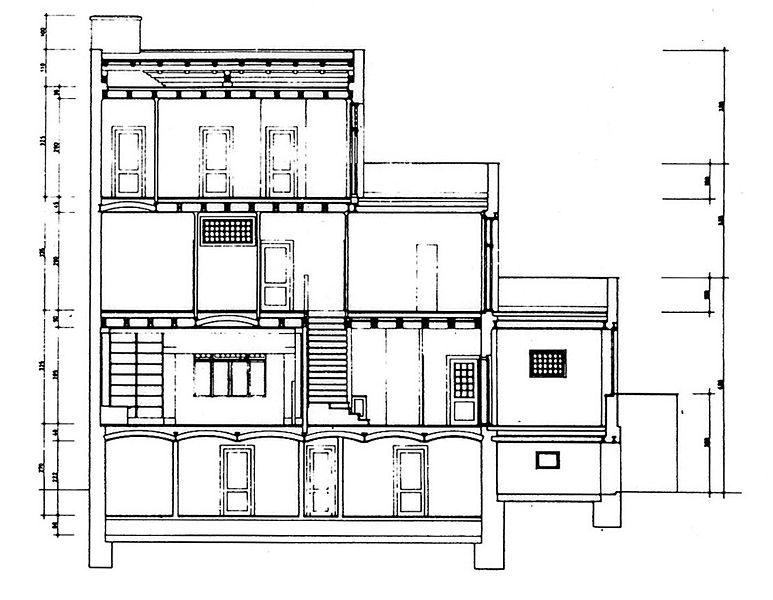 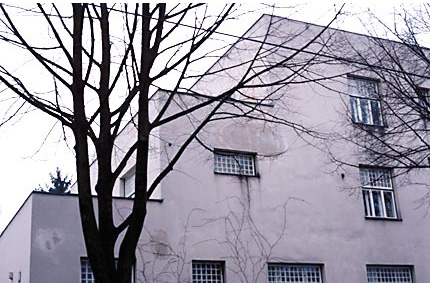 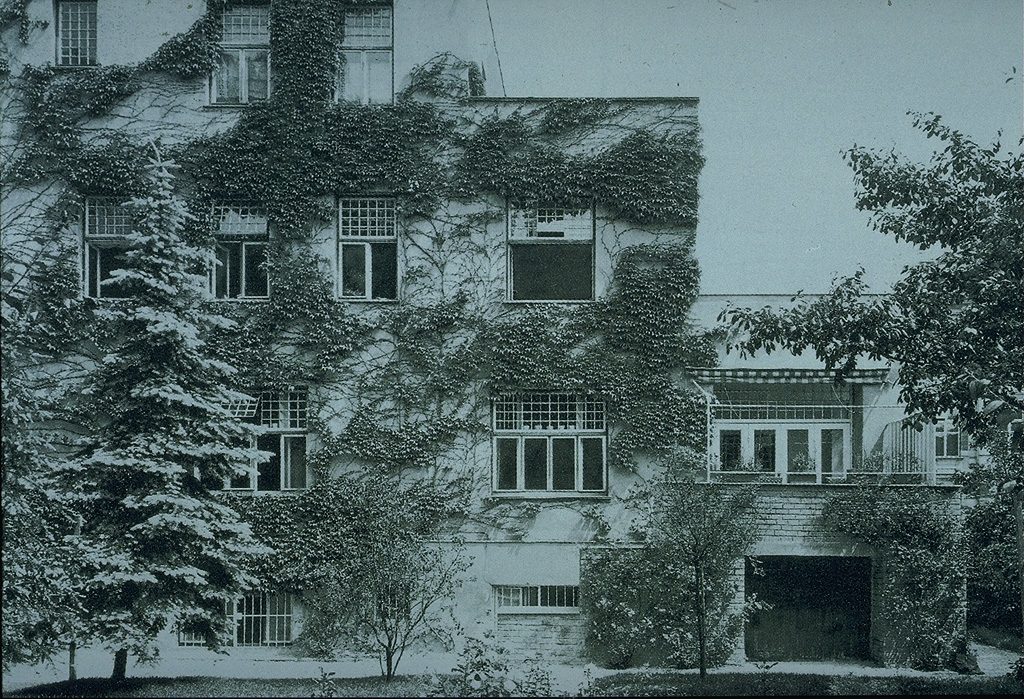 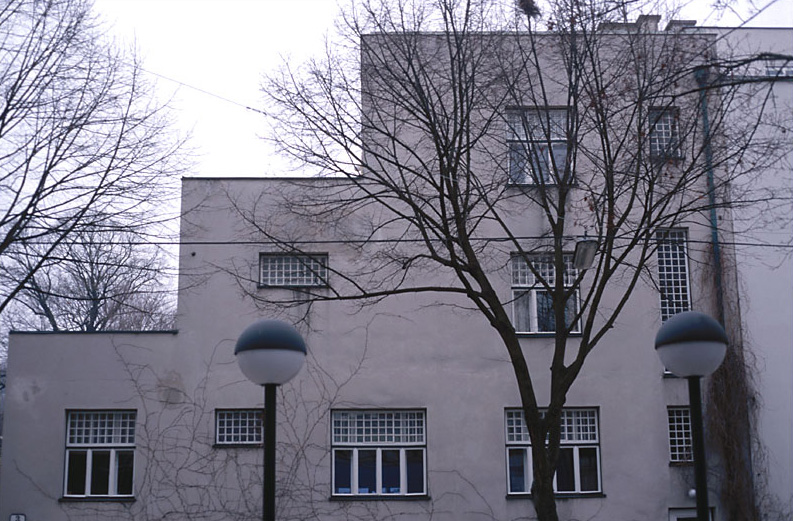 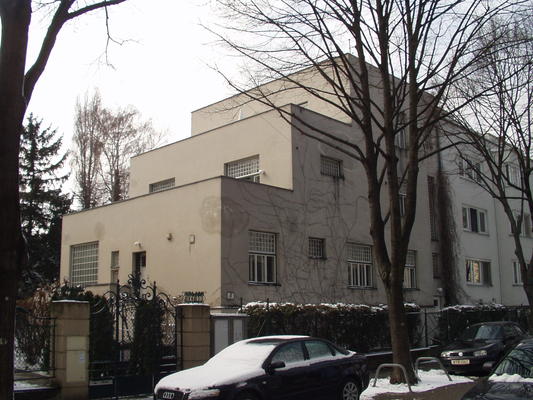 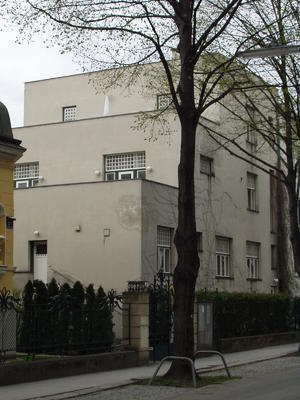 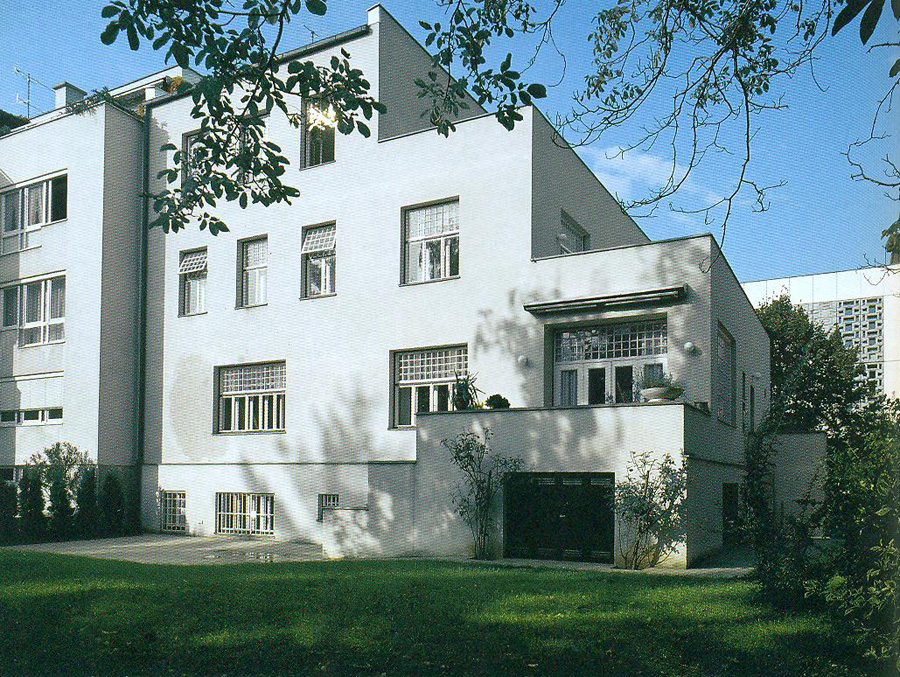 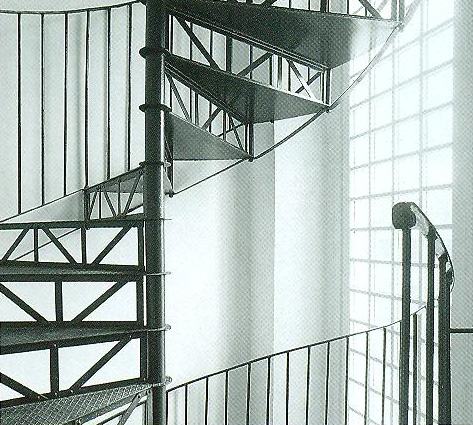 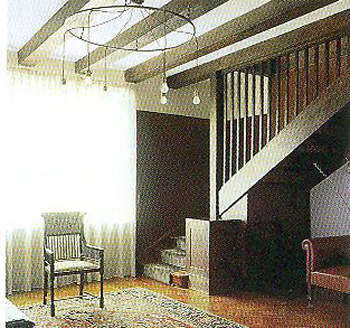 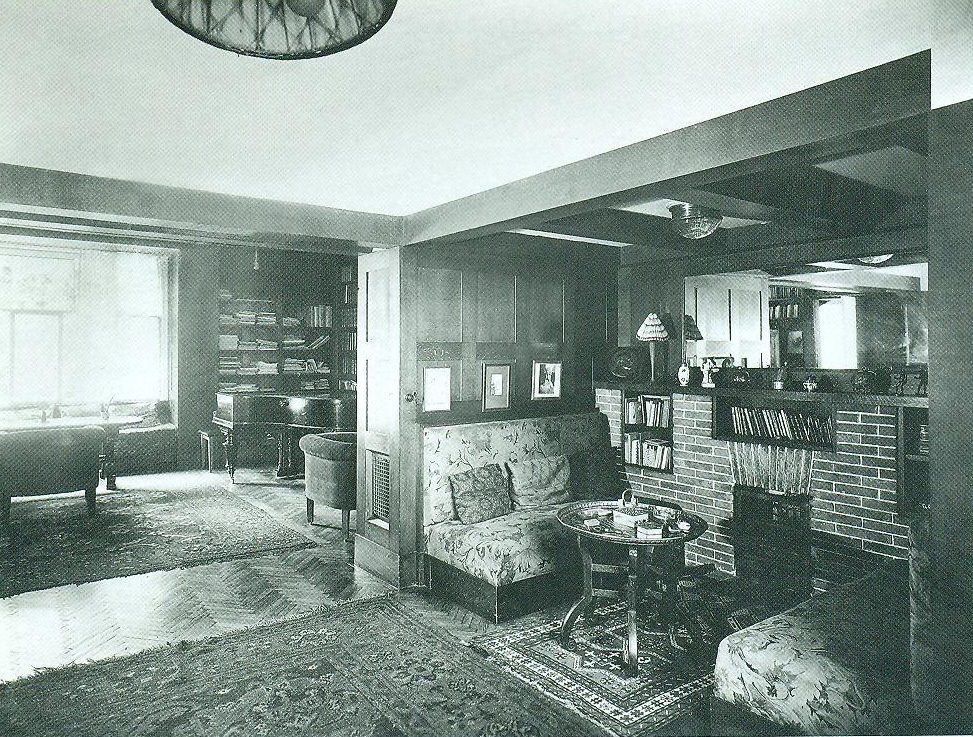