The cathedral, built by order of Alfonso II to house the remains of the Apostle, was erected on the same site of the former church Antealtares.
Since the creation of this building the city.

The faculty began in 1124 and was rebuilt in the sixteenth century Gothic style.

Santiago de Compostela, capital of Galicia, is the main cultural center of this community.

The cathedral is surrounded by beautiful places.
The baroque facade of the cathedral is flanked by the Piazza del Obradorio and buildings like the old Royal Hospital (now Hostal de los Reyes Católicos), Pazo de Raxoi and San Xerome palace of the seventeenth century.
La Plaza de las Platerías houses a source of horses at its center. This connects with the Plaza Square A. Quintana.
Immaculate and places Azabachería, are decorated with a large rise gardens.

The Cathedral of Santiago measured 97 m, its great length is due to the need for hosting a large number of pilgrims at the same time as it is the end of the pilgrimage routes in the world, the road to Santiago. That is why we increased the altars of the chapels of the header and set its internal circuitry, the faithful walked the aisles and ambulatory by the ships of the transept.

The basilica has a pilgrimage of a Latin cross.

The main hall, preceded by a nártex and flanked by aisles, leads to an open four transept chapels.
The main hall is covered by a barrel vault of Roman origin, while the aisles by vaults edges, originating from the Roman period.
The gallery, located on the top floor of the ambulatory have barrel vaults quarter.

The choir has an ambulatory five radial chapels.

The header consists of a chapel axial semicircular plan within it.

The building receives indirect lighting through the windows of the aisles.

The ensemble is completed by two towers on the facade and a tower at the junction between the nave and transept.

In the sixteenth century are the first reforms of the medieval western façade, and in the early seventeenth century ago Ginés Martínez Renaissance staircase by which one reaches the cathedral.
Later in the year 1738 Fernando Homes demolished the old facade and makes the construction of the current (with large openings and exquisite decoration in which participating artists).
The facade is framed by the towers of the bells and the Carraca.

A header romantic chapels radio, they made a closing with a decorative stone wall, organized in three canvases each with its respective door (La Puerta Real, and the holy door of Abades Gate)

The facade of the south end is almost in its original state, it incorporates some relief from the cathedral, and is built on the sides of the Clock Tower and the facade of the Treasury.
The reliefs are scenes from the life of Christ, located in the eardrums (Epiphany Flagellation, Crowning with thorns, etc.). Frieze reliefs and ends in front (of the old facade of paradise-North, the Suppression of Adam and Eve, the image of David, etc.)..
Along with this facade stands the Clock Tower, the fourteenth century, with a defensive nature; on its base was lifted after the baroque with the clock tower and bells.

Replaces the medieval facade of paradise, destroyed in 1758. The new was made in 1769 and is Neoclassical style with Baroque elements.

The Portico de la Gloria – In 1168 King Ferdinand II instructs the Maestro Mateo and western closure of final construction of the ships.
The closure is done with a western porch polychromed granite. Iconographic decor is inspired by the Apocalypse.
Organs: Located at the top of the first sections of the ship (1705-1709)
Chapel: Located in the bottom of the tomb of St. James, which consists of framed platal baroque stone figure of seated Santiago, and the canopy supported by angels, Domingo Andrade. 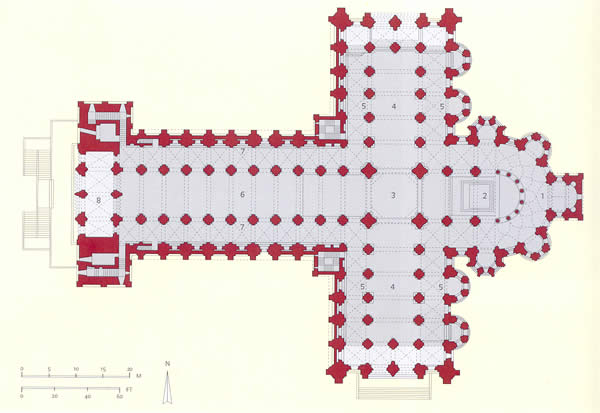 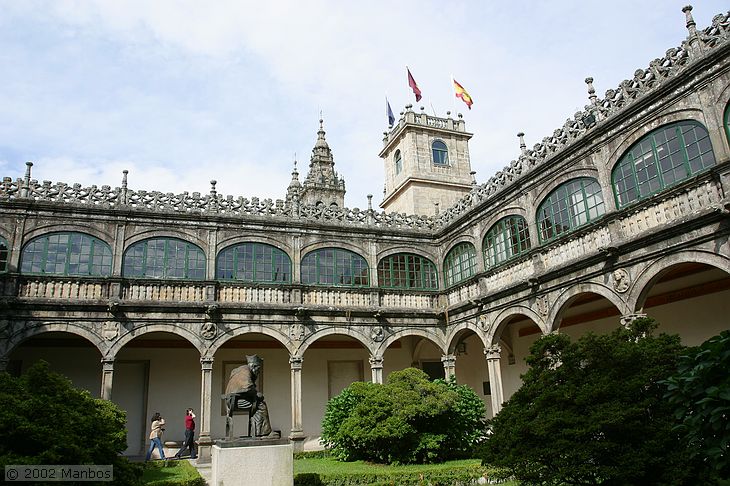 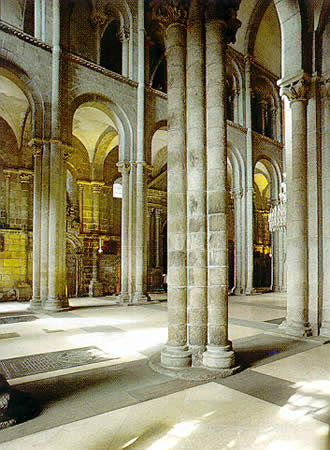 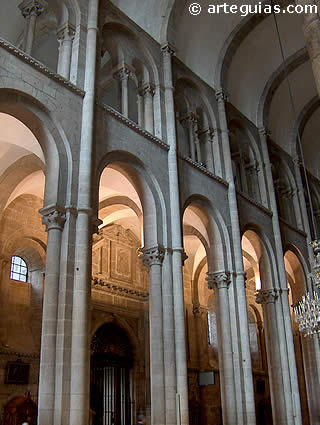 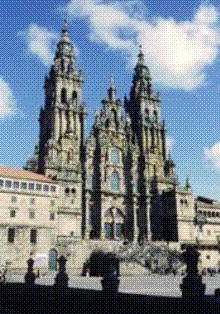 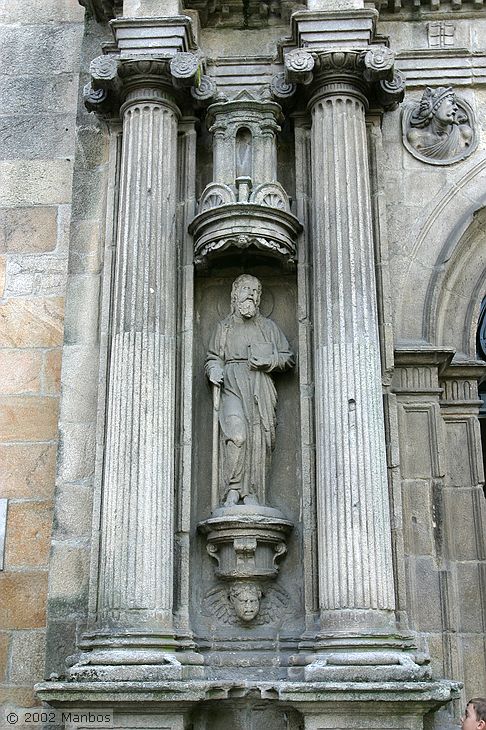 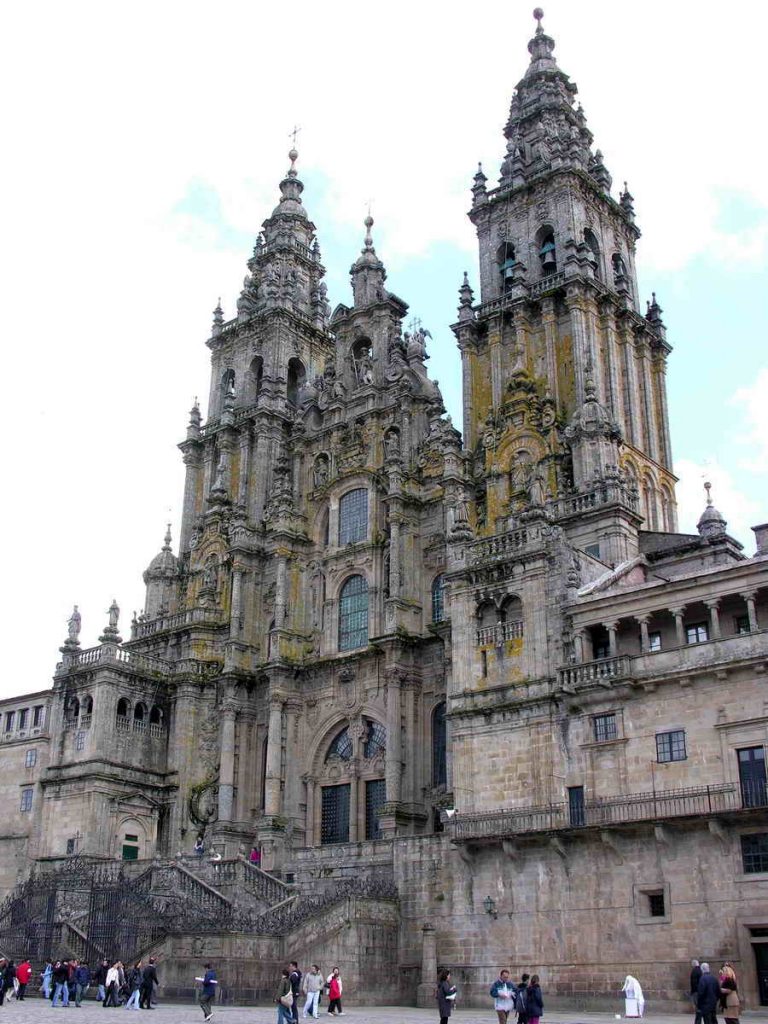