The work was funded by the Catholic Monarchs, Isabel of Castile and Ferdinand of Aragon, as a monument commemorating the martyrdom of Saint Peter.

Donato Bramante was the greatest exponent of the classical architecture of the High Renaissance.

Despite its simplicity and small size, has had great influence on later works, from the same San Pedro del Bramante, to Saint Paul’s Cathedral in London designed by Wren in the late seventeenth century.

Built in the courtyard of the Church eponymous square.
Situated with their free side and stands alone on a high platform.

The original draft included a circular patio that was not done.

The building has a memorial, intended to exalt the figure of Saint Peter as the Roman Pontiff.

The circular building is the figure that evokes the reality of the divine cosmos (Creation) and the conceptual expression of the “Sacred” and represented the ideal city of Plato.

The architecture tends to characterize the trend of eliminating unnecessary and decorative items and also finding a monumentality that is based on simplicity and harmony, the essence of architecture of ancient Rome, which is represented in works such as the Colosseum and the theater Marcelo and which is also based on architectural theory of S. XV by Alberti.

Bramante recreated an ancient temple circular (Tholos), such as Vesta in Rome, both in form and function: with small houses where the inner altar.

The wall of the Cella has a height greater than the colonnade, so that the 2nd floor serves as a drum of the dome that covers the area ½ building.

It is characterized by the expression of proportion and harmony, with the use of clean lines and classic elements.

The meaning of the three bodies:
The Crypt: (underground) which is the old church of the Roman catacombs, the chapel, the church militant and the top of the dome, the church triumphant, the glory of God.

The building consists of a small circular Cella surrounding the hole opened in the rock where Christian tradition places the crucifixion of the first pope. Cella is formed by 16 Doric columns perípteras order, argue that the entablature frieze has triglyphs and metopes, and is crowned by a balustrade.

The cylinder takes over the balustrade of a drum with open windows or blinded with shells of gallons, and ends in an area with a hemispherical dome and cross.

The building dimensions to human scale, providing a living space and paths that lead to the move and embrace the temple, thus achieving harmony and proportion.

Articulation of the wall: There is rhythmically, from four gates at the ends of the axis perpendicular (cardo and Decumano). Each piece of wall between the doors are organized via a vain (central window flanked by two niches).

Bramante part of a module that is not a measure, but a form (cylinder) all the elements that make up the building are cylinders.

The vertical axis dominates the composition and character of the building is scheduled to be seen from outside. The two concentric structures (porch and cylinder) are two different perspectives. The perspective is the main level of the external columns, and emphasizes the separation between the two levels, giving the colonnade to the smaller scale, human-related measures.

The level retranqueado the wall projecting the columns with pilasters, unreal structure (shown), where doors, windows and took the narrow niches intercolumnios overlapping and also interfere with pilasters. Also behind the drum of the balustrade is constrained and simplified in the “attics” of ancient memorials.

This disproportionate effect of the scale is increased with the nature of distant prospect. The temple is when a patio door at a distance so small that binocular vision can see exactly the extent of all the elements.

The pillars are placed as a projection of the columns, so its diameter is slightly smaller.

The circular wall of the Cella in with pilasters that correspond to the columns of the portico, with alternating openings (Niches covered by semi-shaped columns and windows Pechina linda – contiguous).

Innovation with regard to the models, there is overlap in the dome with the torch on cella circular. Besides the set rises above three steps between the columns that give access to the door.

As in Greek and Roman temples, stresses more sculptural treatment of foreign news and not structural.

The inner wall is decorated with niches rhythmically auction semicircular alternating with several dintelados (doors and windows), separated by pilasters that correspond to the colonnade outside.

The shafts of the Doric columns are mandatory and are taken from an old building that was added to new bases and new marble capitals, and inserted into the architecture of travertine stone and plaster.

So the cornices of the triglyphs not correspond with the axis of the capitals, as well as coverage of the caissons are always at the gate triglyphs.

The metopes and cornice external triglyphs is repeated in the cornice and the internal wall of the body, reducing the steps in just keeping the plant and the standard. The metopes external decoration which alludes to the martyrdom of Saint Peter, is available from the main building. 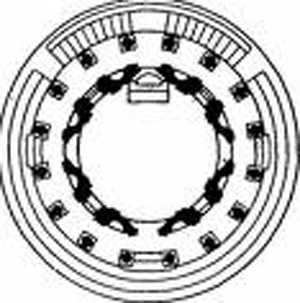 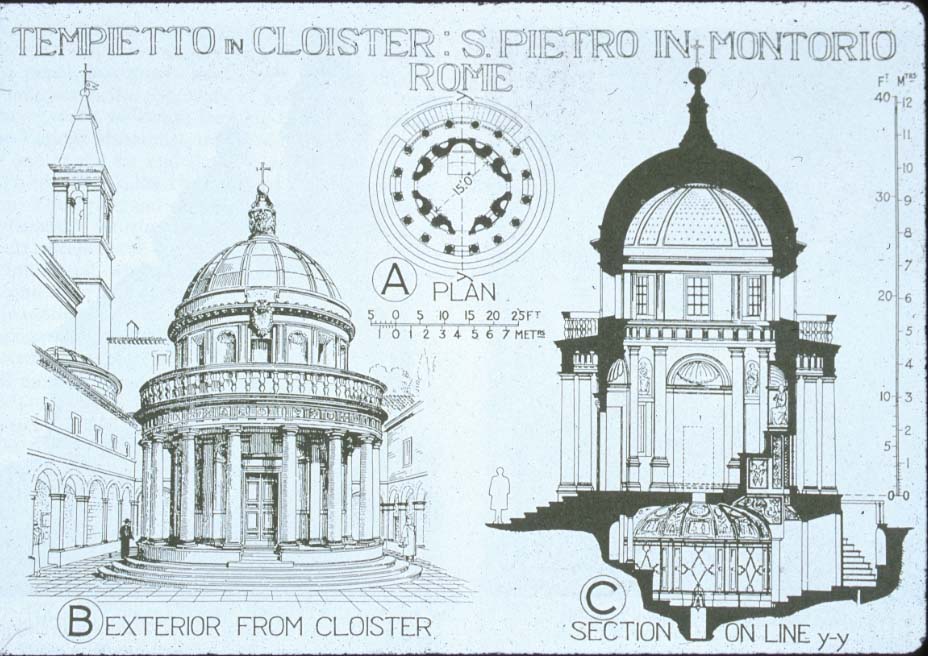 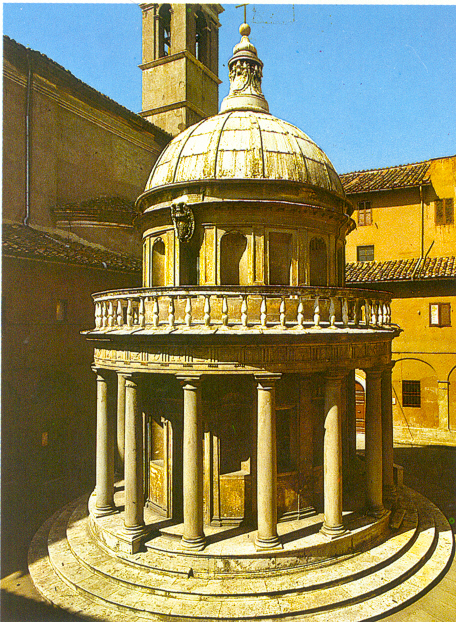 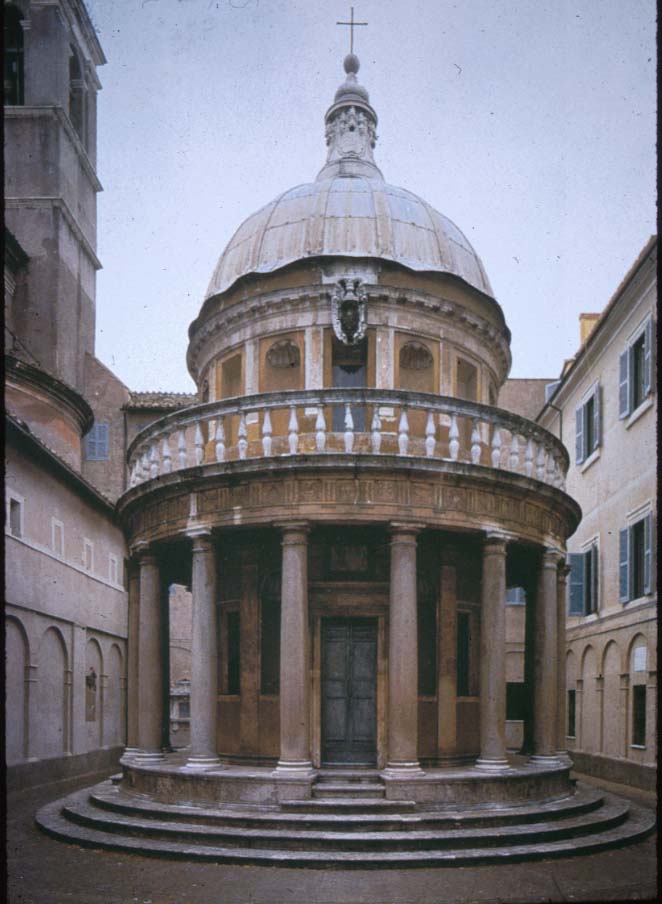 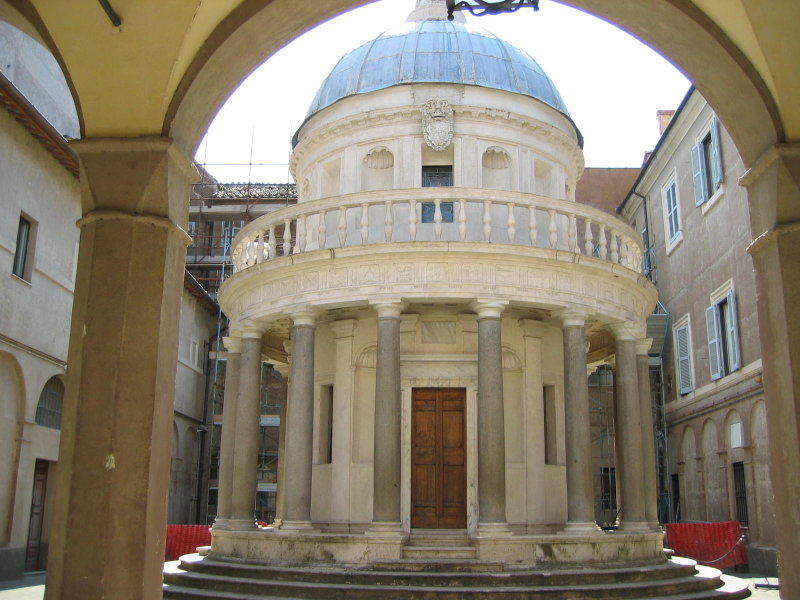 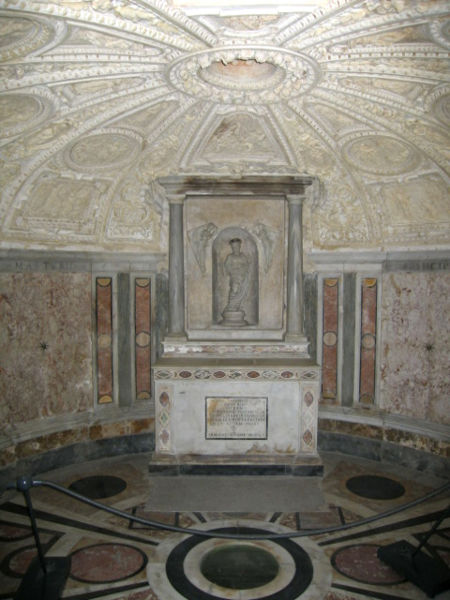 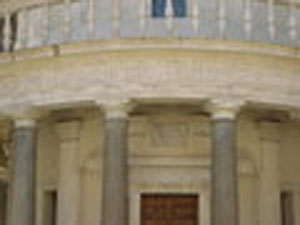 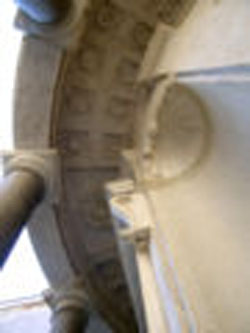