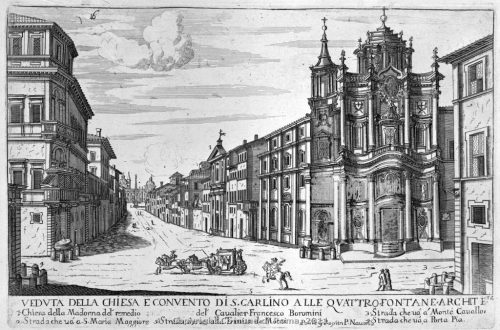 San Carlo, also known as San Carlino, is a Baroque church designed by Francesco Borromini in the seventeenth century. The diminutive is because in 1788, erroneously said that the total of the church was smaller than the size of one of the pillars supporting the dome of St. Peter’s Basilica. The diminutive also used to differentiate the small church of others with a similar name was in the area. The nickname of San Carlino, unofficial source, has finally been accepted as valid by the very organization of the church.

One of the first initiatives taken by Sixtus V during his pontificate (1585-1590) was the creation of an aqueduct to improve the water supply in some areas of the city of Rome. This was completed in 1586 and carried water to the hills Esquiline, Viminal and Quirinal, ending near the Via Pia. The pope also wanted to give the city a network of public sources. Some of them, such as the Piazza dei Monti and Piazza d’Arcoeli, were built by the Vatican itself. Others were built by private initiative in exchange for the supply of water for their properties. The sources of the four corners followed this latest model of development.

Due to the private nature of this project it is not aware of the meaning of each of the sources. The only one we know something is located in the northern corner of the intersection. This represents a reclining woman holding three pears, heraldic symbol of the pope, along with the water that flows from the mountains, another heraldic symbol. Thus, at least one of the four sources is directly related to Pope Sixtus V. Another theory holds that the sources represent four rivers in the world as they are arranged in the four cardinal points.

The crossing of the streets where the church is located is also a good example of urbanism of the second half of the sixteenth century. At the end of the street a benchmark stood as a church, a large statue or obelisk, which drew the eye of the visitor.

Trinitarian order, promoter of the church of San Carlo, originated in 1198. Its main objective was to rescue the Christians who had fallen into the hands of Muslims. Following the reorganization of the order in the sixteenth century, it was divided into two branches, Spanish and French.

In 1634 Borromini (1599-1667) he was commissioned to this work through the Spanish Trinitarians. They wanted the architect to design them a monastery and a church near the four sources. At present Borromini already had enough experience in the construction of buildings, however, he had not yet made ​​any project alone. He had worked under the orders of Carlo Maderno (1556-1629), his relative, and later with Bernini (1598-1680), his great rival, in the construction of Barberini Palace. Both motivated him the opportunity afforded him even preferred not to charge for the work, provided they have freedom in design and serve to showcase their skills and launch their career. 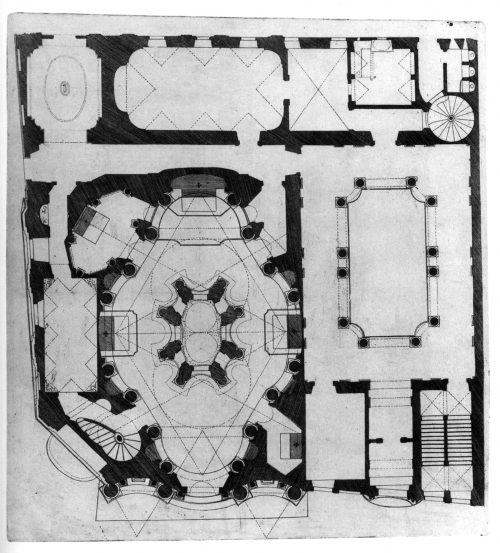 The architect had to stick to a tight budget. The works were partially paid for by Cardinal Francesco Barberini, nephew of Pope Urban VIII, who gave him one of the chapels of the church. Thanks to its expertise in other works, Borromini controlled all aspects of the project, from construction to decoration. According to the Chronicle ( Cronaca del Convento e della Chiesa di San Carlo ) of a Trinidadian of the time, Juan de San Buenaventura: “Borromini could teach the job to the builders, managers of stucco, carpenters, stonemasons and blacksmiths. ”

Construction of the church began in 1638. The interior was completed in 1640 and abroad in 1644. Borromini began the facade in 1665. After his suicide in 1667, his nephew, Bernardo Castelli, the continued. The church was consecrated in 1646 to the Trinity and San Calos Borromeo. The structure of the facade was completed in 1677 and decorations in 1682.

The draft Borromini was very successful, although it only lasted while the baroque was fashionable. In 1710 the monks acquired the house next door and built a better refectory. The former, located behind the church, went on to make the function of sacristy task that still remains. The architect of these reforms was Alessandro Sperone. In 1855 an organ was installed above the entrance, destroying the fresco there. The convent was taken over by the government in 1873, but because of the fame and esteem that aroused in the population, it continued to be directed by Trinitarians. Many of the churches in the area were destroyed but San Carlo was saved. Following these events, the neighborhood, before full of churches and convents, was set up by some churches with gardens and alternate government buildings.

The floor of the church was restored in 1898 thanks to the patronage of a widow of Vasco, Spain Country. Throughout the twentieth century the church lost popularity and was progressively deteriorate. Between 1988 and 1999 they were carried out restoration work. Today the work has a good and great popularity among visitors to the city.

The church is situated at the crossroads between Via delle Quattro Fontane, formerly Strada Felice by the name of Pope Sixtus V, Felice Peretti; and Via del Quirinale, formerly called Strada Pia, in Rome, Italy. A few meters down the Via del Quirinale are the church of Sant’Andrea al Quirinale, work Bernini ; and the Quirinal Palace. Following the Via delle Quattro Fontane few more meters to the north is the Barberini Palace, by Carlo Maderno with the collaboration of Borromini and completed by Bernini, and the National Gallery of Ancient Art. 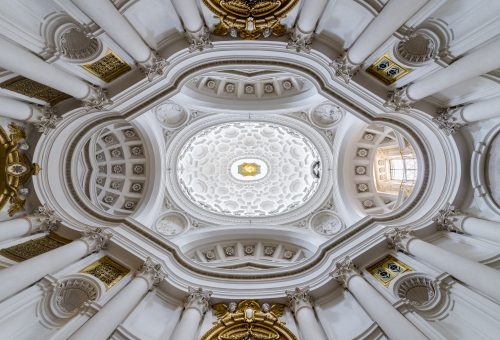 Borromini develops in this building the mathematical aspect of the Baroque with remarkable analytical brilliance. Curved lines and geometry define all aspects of the project where the spatial quality overcomes its limited dimension.

Borromini he faced a shortage of economic resources with emphasis on materials rather than form. The budget made interior decoration may not have the wealth that was common in the churches of the time. Therefore, the shape of the interior space became a key point of the design. Borromini also preferred the low quality materials rather than the expensive, since it could enhance its qualities through art and work. This can be seen inside the church where the sobriety of white stuccoed contrasts with the wealth of material from other works of the time.

The church stands in the corner, while the cloister of the convent is situated next to it, on the Via del Quirinale. After the convent Borromini proposes the creation of a garden.

The oval floor of the dome is inscribed within a rectangular structure in combination with the shape of a rhombus whose vertices correspond rounded to the entrance, the side chapels and the main altar. The plant of the dome is formed by two tangent circles, arcs unit tangent circumference to both turn. The resulting figure, therefore, is not an ellipse but an oval shape. 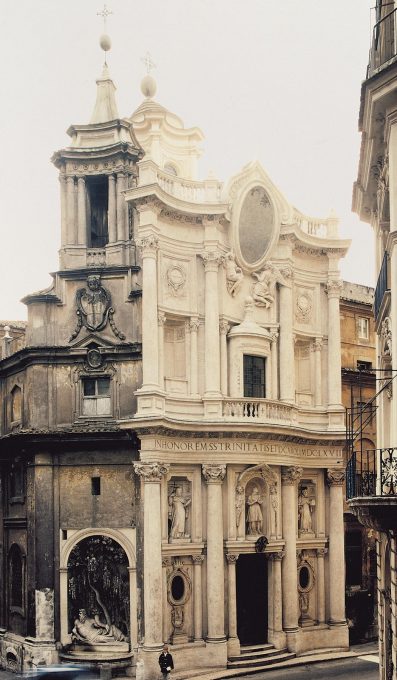 The undulating baroque facade is defined by concave and convex shapes and large Corinthian columns. They divide the facade into two parts, of two floors each, in three sections, the entrance and the sides of it. A large entablature, these being located Corinthian columns, helps to further separate the lower and upper part of the facade. A second group of Corinthian columns frame smaller niches, sculptures and windows, and the entrance to the church and the large oval supported by angels in the upper part of the facade. Above the entrance, two cherubs flanking the figure of San Carlos Borromeo, sculpture by Antonio Raggi in 1675. On both sides of this set sculptures of San Juan de Mata (1160-1213) and St. Felix de Valois are (1127- 1212), founders of the Trinitarian order, made by Sillano Sillani in 1682. Above the door is the emblem of the Vatican, keys, and the Trinitarian order, a Greek cross formed by a horizontal blue bar and a vertical red. The latter emblem appears in various parts of the decoration of the church.

The symbolism of the church, dedicated to the Trinity addition to San Carlos Borromeo, shown in the composition of the facade. Each of the three parties to the father, the son and the holy spirit. The child, in the central area, is the only part that takes a convex shape at ground level, as it is the only one who took human form and is accessible. At the top of the facade, the three components of the trinity take concave shapes.

The facade summarizes the ideas of Borromini. Unfortunately, the small size of the street makes it very difficult to observe the high facade as a whole. This aspect whether it would be taken into account by Bernini in its draft Sant’Andrea al Quirinale, located a few meters down the Via del Quirinale, a few years later.

Located on the Source, it has an off-center position on the church. The lower part includes the source and corresponds to the first half of the composition of the facade. Above there is a window on a shield with an angel and the symbol of the Trinity. The closing bell is an open structure with Doric columns and balustrade that develops in two parts in height and is finished with a golden ball. 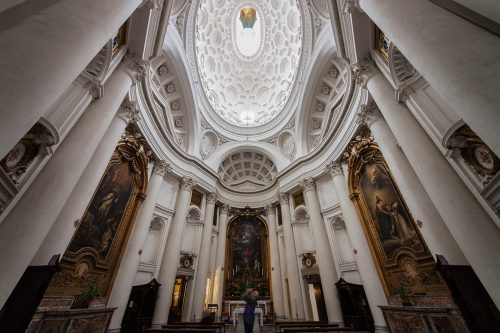 The interior of the church complex consists of three parts: the base, the dome and the transition zone between these two. The altar is located on the main axis of the plant, on the opposite side to the entrance. The altars are dedicated to San Miguel de los Santos and San Juan Bautista de la Concepción.

Around the church there are a total of sixteen Corinthian columns supporting a large entablature. The groups of four columns frame niches, moldings and doors, providing variety to the undulating interior space limiting wall. These elements are placed with respect to a particular geometry creating a rhythm.

Above one in two columns and the entablature born each of the four arches that create the base of the dome of the church. The coffered dome octagonal shaped in the likeness of the Baths of Diocletian and the Basilica of Maxentius. These octagonal coffered combined with other cross-shaped and other hexagonal. They are decreasing in size as the dome is closed at its upper end. The dome is illuminated through windows located at the bottom and vertical windows located on the tops flashlight.

On both sides of the main altar are two entrances. The left leads to an adjoining chapel, the Chapel Barberini, Isabel sanctuary Canori Mora, Trinitarian lay beatified by Pope John Paul II in 1996. The right gives way to the convent and crypt.

The crypt contains small chapels around the central space, the plant is identical to that of the church, of which Borromini wanted to be buried. 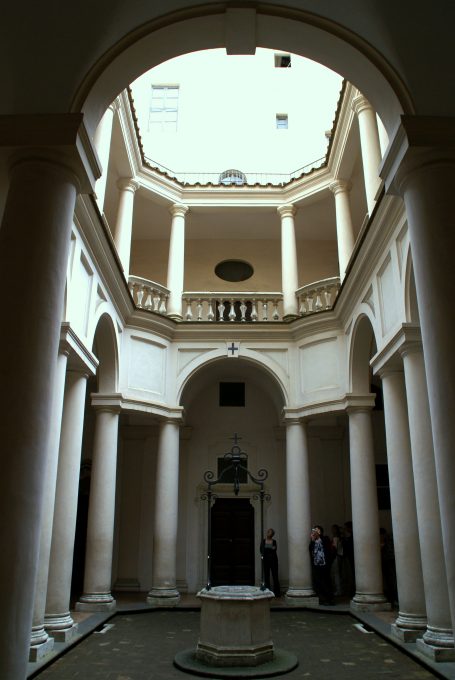 Next to the church stands a small monastery whose cloister hides some details worth seeing. Work also of Borromini, the cloister, two stories high, it has a rectangular plan. The pillars, which prevent the corners, make possible the reading of the plant as an octagon. The entrance to the faculty is located on the longitudinal axis of the space. Borromini adds complexity to set varying the distance between the columns and having flat walls and alternately on these curves. In addition, the capitals of the columns of the ground floor are square while the first floor is octagonal. Architect includes a novel aspect in the design of classical balustrade. Borromini combined here parts backwards and forwards in a very peculiar game.

Borromini was not truly appreciated until the twentieth century, when finally his great knowledge of ancient architecture and innovative designs inspired by it was recognized. Borromini design the roof of the dome of San Carlo with coffered equally as they did the Romans, to lighten the weight of the structure. The structure is made of brick, while the interior is made of stucco and limestone facade.