St. Patrick’s Cathedral is the largest Catholic Gothic cathedral in North America, home of the Archbishop of the Archdiocese of New York and parish church. Its construction took more than 20 years to become one of the best examples of American Gothic churches.

In 1810 the Jesuits bought for $ 11.000 the site with the intention of building a school for young Catholics. The project was not built and in 1813 the land was sold again to Dom Augustin Lestrange abbot of the Trappist community that was at United States fleeing from the French authorities, who created a small monastic community and an orphanage. With the fall of Napoleon in 1814, the Trappists returned to France, leaving the property.

On October 6, 1850, Archbishop John Joseph Hughes announced its intention to erect a new cathedral to replace the existing St. Patrick’s, located at the intersection of Prince and Mott Streets on Mulberry St. The cornerstone of the new cathedral he designed in Gothic Revival style by architect James Renwick Jr. assisted by William Rodrigue, was laid on August 15, 1858, on the south side of the orphanage of the diocese, far north of the populated areas of New York at that moment. The work that began that year had to be interrupted by the American Civil War, being retaken in 1865 until its completion in 1878. 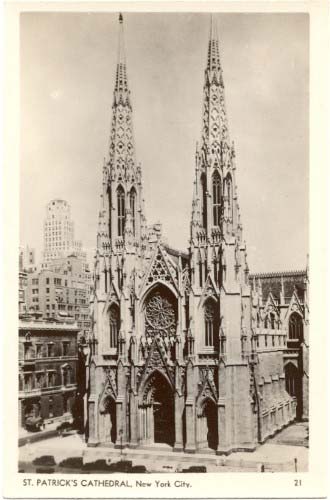 The construction of the new cathedral became necessary due to increasing population in the city and the continuous arrival of immigrants from Catholic religion.
Renwick spent time in France in mid-1850 and studied French Gothic style buildings. His design for St. Patrick had a definite European influence, while incorporating what was going on United States. As a Protestant, Renwick had to consciously design the church, focusing Catholics to incorporate themes and styles. 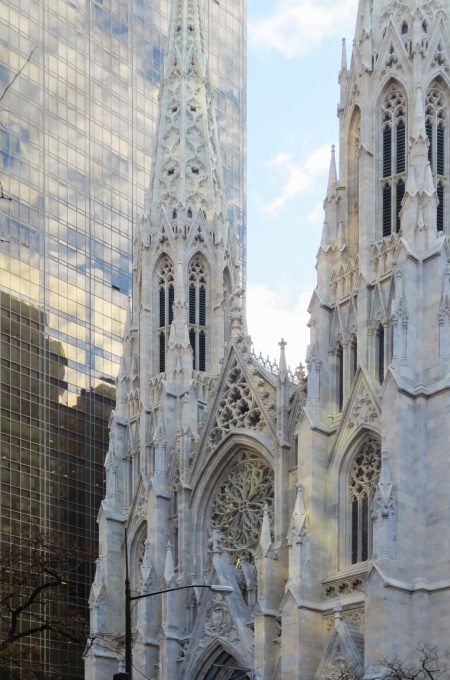 If St. Patrick’s Cathedral in New York under review can see many revealing details about the history of its construction. Its architect, James Renwick, had to build a building without precedent in the country should be praised forever, especially for its magnificence.
Renwick designed differently to other Gothic churches, with a symmetrical shape instead of the more common asymmetric church plant. Normally, the church would have a front central tower. However, St. Patrick symmetry is created with two huge towers and spiers, showing the difference in design with ordinary churches. These needles could be seen for twenty miles. But over time, the development of the city led to the skyscrapers that stood in their way and the power of the cathedral fell slightly. These towers, which were not added until the end of the 1880s, joined the verticality of Gothic architecture strove to display.

There were other factors that influenced the construction of the building, including one very important were the finances. Although it was thought that the donations would provide prominent Catholics in the area would reach $ 100,000, only $ 70,000 only finally were collected. In addition, church leaders refused to allow workers to continue to work to not having money to pay wages. In 1860, construction had to be suspended due to lack of funds and the Civil War, further delayed construction. After the war the cathedral was moving slowly and in 1878 was carried out another massive fundraising campaign. This ensured that St. Patrick’s Cathedral opened in 1879 although not all elements were finished, or needles and the Chapel of the Virgin.

At that time there was only one other cathedral in America, the Basilica of the Assumption in Baltimore. San Patricio was built to make it clear that the Catholic population of New York was legitimate and important, and also to Baltimore Cathedral saw small and insignificant.

In the construction of St Patrick designs that clearly identified with a Catholic church they were adopted. Its large size was a badge that, at that time, distinguished it from any other in the country. It was originally designed with a plant that measured 101.20m long and 53m wide, with two towers on the facade of 100m high.
St. Patrick’s finances resulted in a slightly different design that Renwick had anticipated. The headliner was originally to be vaulted stone, but because not enough money for such an impressive roof was replaced by a wooden one. Wood received treatment to resemble stone and mask the cheaper material.

The Garden of Heaven 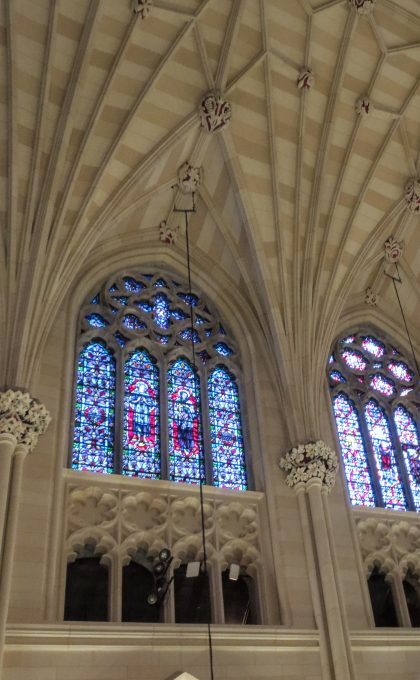 No two snowflakes are alike and this concept also applies to architectural “patterns” that adorn the roof of the cathedral. Each of the 300 has a unique design based on nature. Some features flowers, leaves or grapes, and there is even one representing an owl. Together they form the “Garden of Heaven”.

Neither he reached the money to build a tower that will rise at the intersection of the cross-shaped roofs. This element also provided for in the original design of the cathedral would have made an even more impressive building.

Originally the word “Gothic” (Gothic) was used by Italian Renaissance writers as a derogatory term referring to all art and architecture of the Middle Ages, considered by them as works of the Goths barbarians (Goths). Since then, the term has been used to describe the architectural style first appeared in northern France at the end of the twelfth century.
Although San Patricio was built in Gothic style, its design is original and different. The cathedral is characterized by its purity of style, originality of design, harmony of proportions and the beauty of the materials and workmanship.

Lines form of a Latin cross plant San Patricio. The lobby, with its entries on Fifth Avenue, leading to the church. The nave of the church is made shorter by the long arm of the cross and extending north and south, up the transept, with entrances on 50th and 51th St respectively.
Inside the cathedral, slender marble columns supporting the vaults that rise 33.50m above the ship. At its center is the head of the cathedral, holding the high altar covered by a canopy of 17m bronze baldachin called. 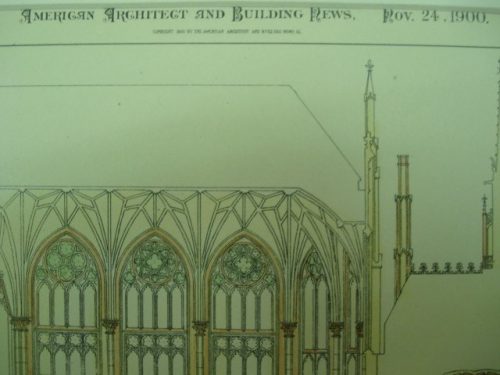 In the center of the Ambulatory and behind the sanctuary is the Chapel of Our Lady, a space reserved for prayer and contemplation sacred space. Built in 1901, this chapel was part of the original design. On the altar is the statue of Our Lady of New York. The chapel is surrounded by large glass windows of colors that have been described as “light shinning jewels”

The Lady Chapel was planned for the cathedral by its architect, James Renwick, Jr., but could not run. In 1900, Charles Matthews was selected to design the chapel we know today, a legacy built heritage Margaret and Eugene Kelly. She was the niece of Archbishop Hughes, one of the founders of the Catholic University of America in Washington DC.
The Chapel of the Virgin is French Gothic style and was inspired by the thirteenth century church of Sainte Chapelle Paris. Of particular interest are the windows made by the manufacturer of Paul Vincent Woodroffe English glass, the image of Our Lady of New York Oronzio Maldarelli, and mosaic with the Annunciation of Hildreth Meiere in front of the altar. 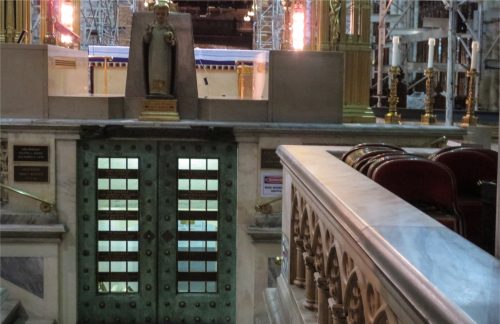 The crypt, located below the Shrine of the Altar, is the place where all the archbishops who have served the Archdiocese of burrowing New York.

The baptismal font was moved in 1986 from the original baptistery at the west end of the cathedral to its present location at the Altar of the Holy Family in the north transept. Made of white marble, rests under a golden canopy of carved oak.

The sanctuary has undergone many changes since the cathedral was opened. From 1927, the original altar, designed by architect James Renwick, Jr., retired and part of it was installed in the Church of Fordham University in the Bronx campus. The original sanctuary had a length of 23.16m, surrounded by the choir stalls on both sides. Between late 1930 and 1942 the altar area was renovated. The high altar and the original altarpiece was replaced by a bronze baldachin sanctuary and stained glass in pink tones added. In 1980 the altar was newly renovated, building a stone altar from sections of the side altars and placed in the center of the sanctuary, despite its detailed construction it was withdrawn in 2013.

From the ceiling hang Galeros or red hats of the first four cardinal archbishops of New York: Cardinals McCloskey, Farley, Hayes, and Spellman. 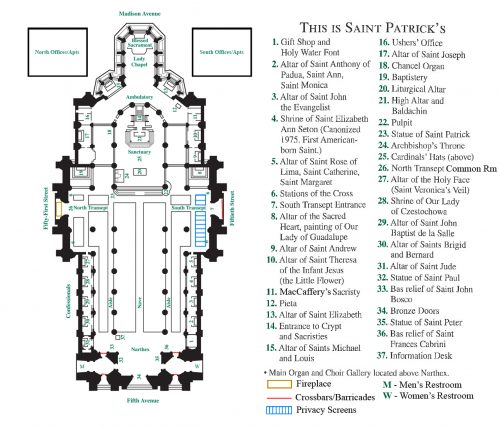 The Cathedral has two retail stores, one inside the Cathedral and one on the outside, on the 51th St.

The cathedral, which seats 2,400 people, is built of brick covered with marble extracted from the quarries of Massachusetts and New York. The slates that cover the roof come from Monson, Maine.

Originally it thought to use cast iron because of the huge size of all the elements, but finally white marble was used because it was more reliable and less expensive. Nevertheless inside cathedral ceiling it had to be done in plaster and wood and marble not as planned. So while most of the cathedral is made of marble, despite popular belief, the roof is not.

The windows were made ​​by artists in Boston, Massachusetts and European Chartres, France and Birmingham, England.

Charles Connick rosette made. This has been recognized as the best work designed by the artist considered the genius of the twentieth century in stained glass design. 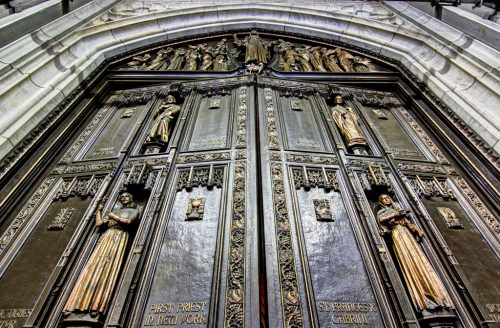 La Piedad, sculpted by William Ordway Partridge, is three times larger than the Pieta by Michelangelo. The Stations of the Cross won a prize in 1893, at the Universal Exhibition of Chicago. Commemorated the visit to the city in 1979, the bust of Pope John Paul II is in the back of the cathedral.

St. Patrick’s Cathedral has two pipe organs. The Gallery Organ is in the Coro Gallery on the 5th Avenue entrance and below the Rose Window in the clerestory, near the south transept. The Chancell Body (Chapel Organ) is located in the north of the Ambulatory, next to the Chapel of San Jose. Longer tubes run horizontally through clerestory North and South.
Pipe systems, amounting to 8,600, with 206 stops, 150 ranks and 10 divisions vary in size from a few centimeters to almost 10m and can be controlled from two places above the entrance and from behind the altar.

The first organ in the cathedral was built by George Jardine & Son, one of the most distinguished builders of New York organs, and installed in 1879. It consists of 4 manual with 51 stops and 56 ranks. 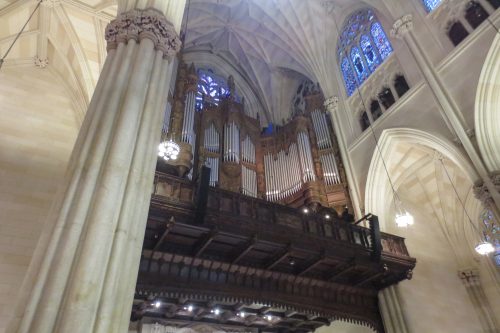 In 1927 plans began to change bodies, projecting greater space for their locations, like Gallery for Organ in coral zone, achieved through an extension on the original gallery made with reinforced concrete.
The Chapel of the bodies, took three years to be built. The body is enclosed by a screen of carved oak, designed by Robert J. Reiley, with Gothic ornaments and symbols.
In the 1940s and 1950s tonal changes were made. In the 1970s and 1980s additional renovations by Jack Steinkampf of Yonkers, New York, especially in the flutes and reeds revoicing, and the addition of the Trumpette in Chamade they were made.
In 1993 he undertook a major restoration, with the acquisition of new consoles for both the Gallery and for the Chancel Organs. The use of fiber optic cables allowed consoles could be used simultaneously in both organs. All Chapel organ was restored and finally, the echo organ, located in the clerestory near the central crossing, suffered tonal changes. The restoration of the organ was completed in 1997.
Today St. Patrick’s Cathedral has three organs.

Each of the 19 bells located in the north tower of the cathedral has a holy name and a unique inscription in Latin, without any repeat. They vary in size, weigh 78.47kgs smaller and larger 2.997,33kgs, each responds to a different note.

Today a keyboard is used to control the bells, but once there was a “vanity bells” coming up to the tower and melodies created manually. Montell Toulmi, resident in New Jersey controlled for 44 years the chiming, until he died on May 5, 1946.